iPhone users have overwhelmingly been denying apps the ability to track data for advertising, new research suggests, with App Tracking Transparency apparently delivering a worst-case-scenario for personal data brokers. Added in iOS 14.5, which was released to iPhone in late April 2021, the new system requires app-makers to request explicit permission from users before they can share any data collected on them for targeting and advertising purposes.

Apps that do wish to do that must show a pop-up message with two clear options. If you use the Facebook app, for example, you’ll get the dialog: “Allow “Facebook” to track your activity across other companies’ apps and websites? Your data will be used to measure advertising efficiency.”

There are two choices – “Ask App Not to Track” or “Allow” – which users must select from before they can continue to use the app. Ad networks and others had reacted with frustration to the system, arguing that it could have a significant impact on the lucrative user profiles that collated data helps build. Those can help advertisers target their campaigns most effectively.

Apple countered with the fact that App Tracking Transparency doesn’t actually change any of those data sharing abilities – it just requires specific permission before they can be carried out. Now, though, new research suggests the ad companies were probably right to have been worried.

Analysis firm Flurry Analytics, which is owned by Verizon Media, gets aggregated insights from over 1 million apps across 2 billion mobile devices per month. It’s been using that to track how many users actually opt-in to data sharing each day, in addition to the share of users that are “restricted” and thus cannot be asked for permission. 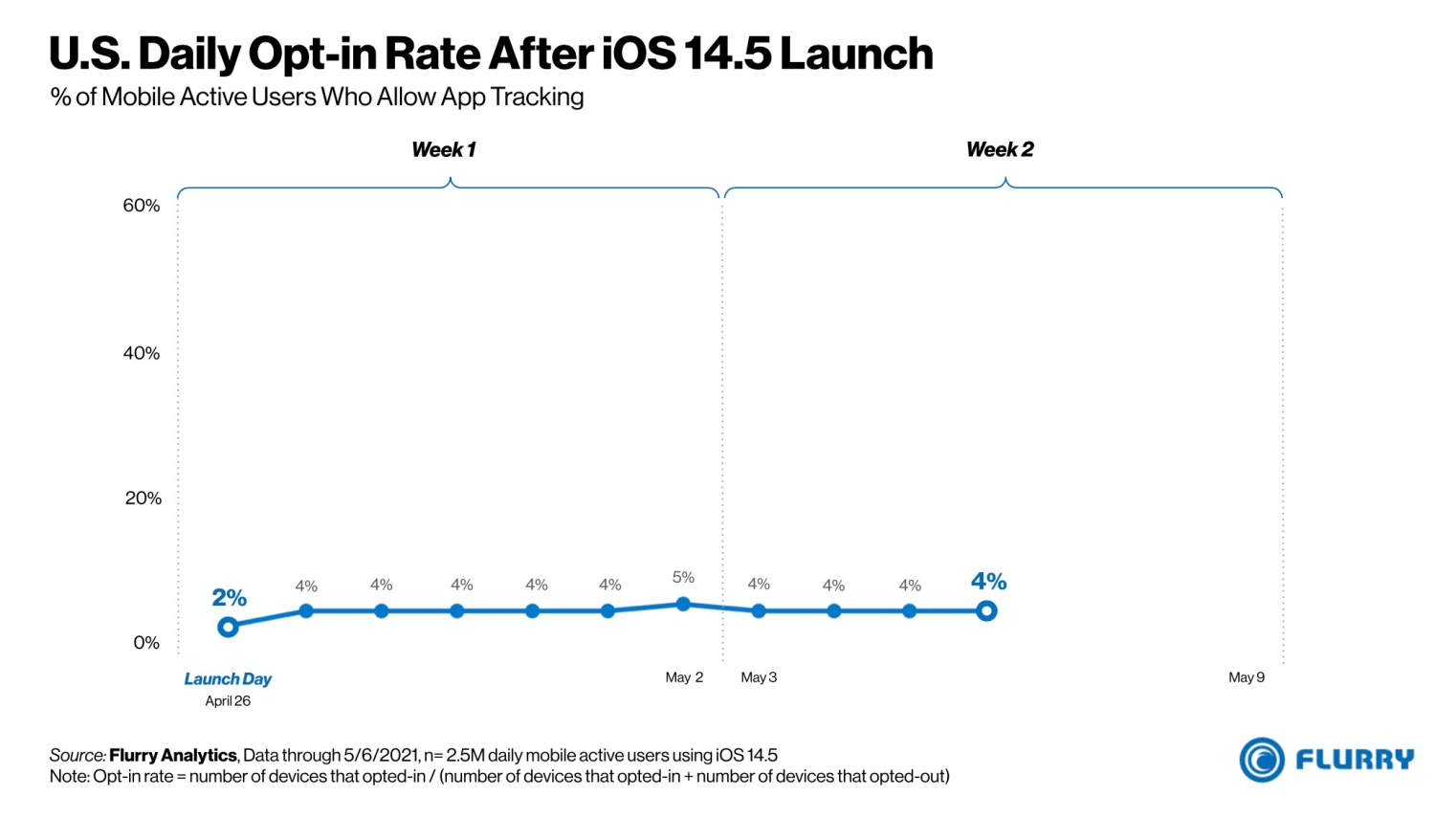 For those who are considered “restricted” for app tracking – that is, they have the global setting “Allow Apps to Request to Track” switched off, and so never see the request dialog for each app – that currently accounts for 5-percent of worldwide daily users, Flurry says. In the US it’s a little lower, at 3-percent.

Apple does offer app-makers and advertisers an alternative, its own identifying system. Dubbed SKAdNetwork, it’s been criticized by some third-parties as being another example of Apple trying to push its own services.

For end-users, though, it seems Apple’s new rules have struck a chord. The company has made privacy a key pitch in iOS and iPadOS in recent years, including trying to pull back the curtain on just what data sharing is going on among advertisers and data brokers, and how that can be used to make surprisingly accurate assumptions about individuals.