NASA’s Opportunity Rover has set the human record for off-world driving distance this week. This record was previously held by the Soviet Union’s Lunokhod 2 rover, whose record was smashed as Opportunity kicked out 25 miles (40 kilometers) of driving. Any opportunity to one-up our space-race comrades, that’s what we like!

Previous records were set over the past 40 years by the USSR, China, and NASA. The chart you’re about to see in several pieces was mocked up by NASA to make clear the distance a wide variety of missions have gone, including a comparison to a marathon race. 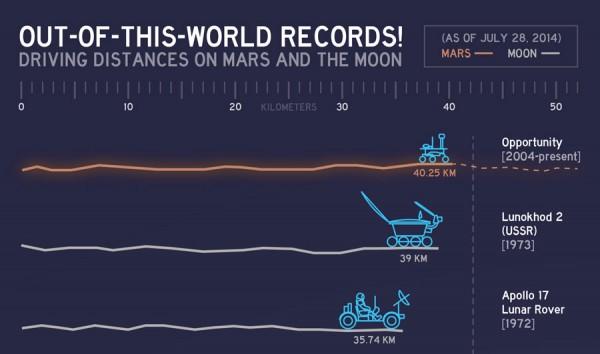 Of particular importance to the lay person is the distance Curiosity has traveled. Opportunity and Curiosity are different missions, both on Mars now, the latter being the one we’ve written about most often over the past couple of years.

Opportunity landed in 2004, while Curiosity landed in 2012, and they both still roll forth today. You’ll also notice that the previous record held by the USSR was captured in 1973, just one year after the Apollo 17 Lunar Rover set a record over two previous NASA missions. 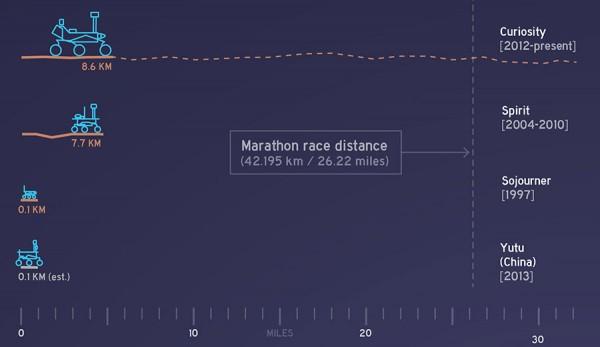 According to John Callas, of NASA’s Jet Propulsion Laboratory (JPL) in Pasadena, California, the rover was never really meant to drive this far. “This is so remarkable considering Opportunity was intended to drive about one kilometer and was never designed for distance.” Callas added, “what is really important is not how many miles the rover has racked up, but how much exploration and discovery we have accomplished over that distance.”