Acer Spin 5 and Spin 3 get thinner, lighter, TravelMate gets tough

The Acer Spin convertible notebook series (3 and 5 models) both got new iterations while TravelMate was introduced at CES 2020. The Acer Spin 5 and Acer Spin 3 feature 2K or Full HD touchscreen displays with “new compact aluminum form factors” and Acer Active Stylus abilities with Wacom AES. They’re very similar to what we’ve seen from Acer in this line before – now they’re rolling with the latest and the greatest under the hood.

On January 5, 2020, Acer revealed the newest versions of the Acer Spin 3 and the Acer Spin 5. The Acer Spin 3 (SP314-54N works with Windows 10 Home 64-bit and a 14-inch display with 1920 x 1080 pixel resolution. That display has Acer CineCrystal tech with LED backlighting, IPS tech, TFT LCD with multitouch, and Wacom AES pen support with an included fast-charging Acer Active Stylus.

This laptop uses USB Type-C with support for Thunderbolt 3. The hardware includes USB 3.1 Gen1 ports, one featuring power-off charging. There’s a full-sized HDMI port, microSD card reader, and a 3.5mm headphone jack/speaker jack. Power for this laptop is provided by a DC-in jack.

The Spin 5 has a 13.5-inch display with 2K resolution (that’s 2256 x 1504 pixels). This display is smaller than the display on the 3, but is more dense with pixels – and it has many of the same features, like Acer CineCrystal tech with LED backlighting, and it’s an IPS TFT LCD with multitouch. This Spin 5 model also has AES pen support. That’s also for an included fast-charging Acer Active Stylus.

Both models can work with Wi-Fi 6 and have form factors that are thinner and lighter than their direct predecessors. Both models offer up to 16GB RAM – the Spin 3 has the option of dual SSDs for maxed-out storage capacity, while the Spin 5 has up to 1 TB SSD storage.

For the TravelMate series, Acer TravelMate P6 and TravelMate P2 were revealed with U.S. military grade standards (MIL-STD), Windows 10 Pro, and up to 10th Gen Intel Core i7 processors. 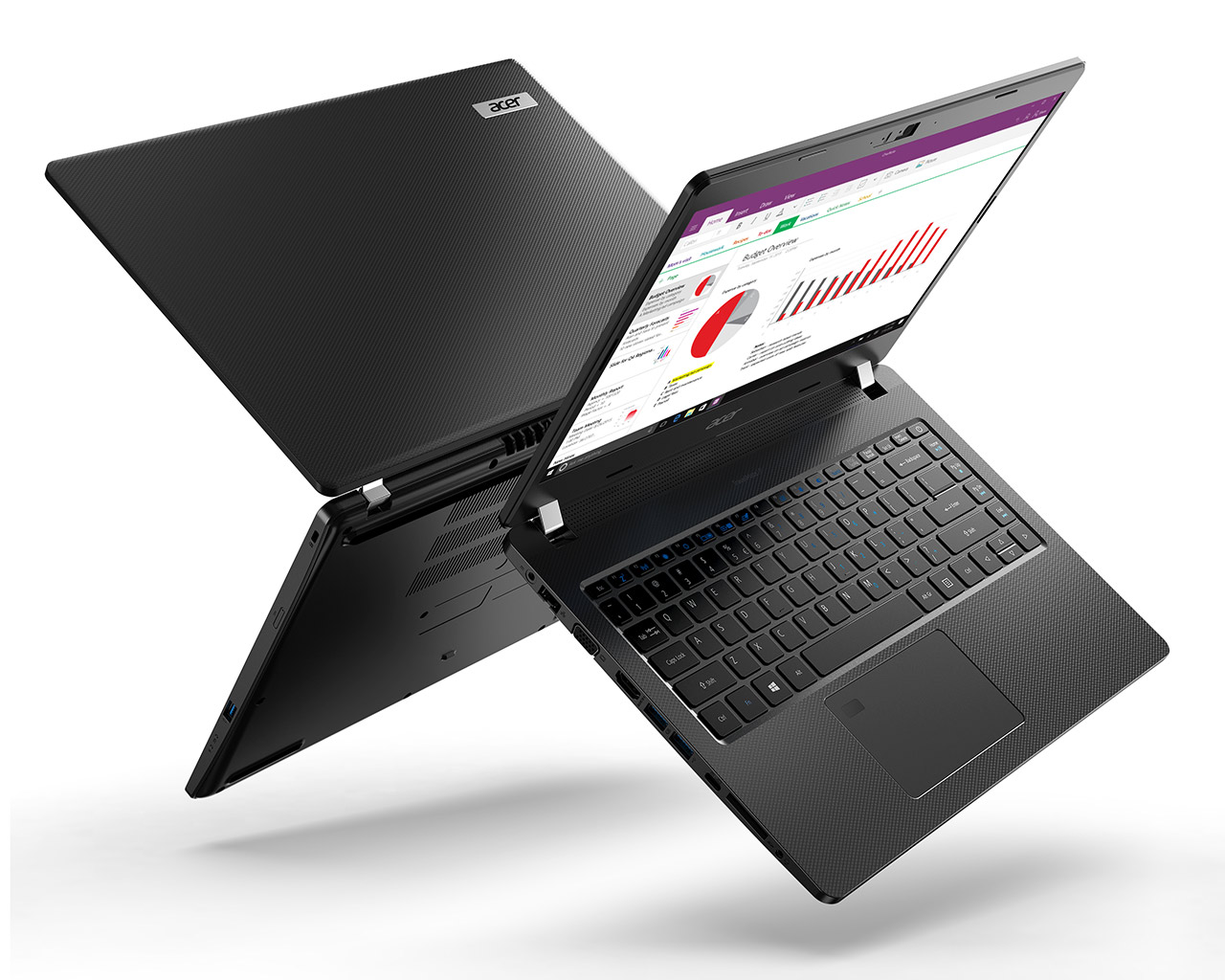 The TravelMate P6 is part of the Intel Project Athena system, and “verified for advanced mobile performance” by Intel. This machine works with what Acer describes as 23 hours of battery life and has fast-charging abilities. In this case, that means it can be charged up to 50% in less than 45 minutes. This device has optional eSIM-enabled 4G LTE connectivity.

The TravelMate P2 works with a 14-inch display at 1920 x 1080 in one configuration, and a 14-inch display with 1366 x 768 pixel resolution in another. This device has up to 16GB DDR4 RAM, upgradable to 32GB with two soDIMM modules. This machine works with up to an Intel Core i7 i7-10510U processor and Intel UHD Graphics. Both the P2 and the P6 comply with MIL-STD 810G U.S. military grade standards, which means they are rough and tough.