Acer’s new touchscreen ultrabooks weren’t exactly a surprise at Computex 2012 – after all, Intel and Microsoft have been pushing OEMs to consider touch and Windows 8 best-buddies – but we’ve still been impressed by the new Aspire S7 models. Coming in 11.6- and 13.3-inch form factors, the slimline ultraportables have everything you’d expect from a regular ultrabook, but throw in 180-degree fold-back screens and multitouch support.

The 11.6-incher is particularly light and promises up to nine hours of runtime, while the 12.5mm thick unibody aluminum chassis manages to look sufficiently different to a MacBook Air so that you wouldn’t necessarily mistake the two. It’s flex-free as well, and the backlit keyboard is a much-needed addition for the sort of market that might find the S7 appealing.

As for the 13.3-inch S7, it boosts the runtime promise to up to twelve hours, but sticks with the same unibody aluminum and minimalistic style. The touchscreen responsiveness is good – despite these being prototypes and not expected to go on sale until Windows 8 arrives in a few months time – and the keyboard, though relatively short on travel, isn’t awful. 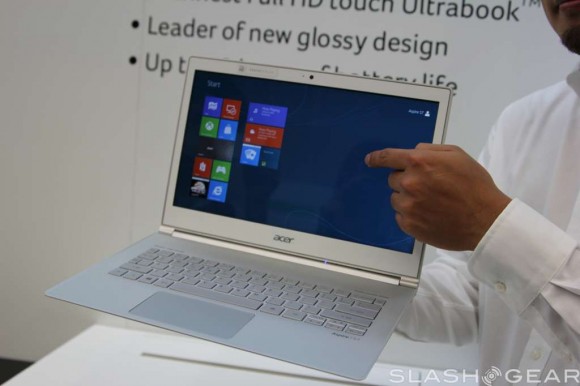 Pricing will be the big decider, and of course there are plenty of other, more unusual touchscreen options for those who want to tap through Windows 8. Still, as near-mainstream ultrabooks go, the Aspire S7 models do a good job of avoiding pure-Apple replication.