Dr Jakob Vinther began study on the colors of dinosaurs many years ago. His first study showed the color of the animal you’ll see below this paragraph – a dinosaur by the name of Anchiornis huxleyi. This is the first accurately-colored dinosaur in the world, based on fossil melanin. The method used with study started back in 2006 included animals with feathers. Now a new study has surfaced (also including Vinther) that further substantiates the idea that melanin remains well-preserved enough to reconstruct color patterns on ancient animals – like dinosaurs.

The pigment known as melanin can be found in organisms both living and dead around the world. This pigment creates black to reddish brown hues in the compositions of the animals – in skin, in feathers, etc. Melanin is retained in “exceptionally well preserved fossils,” according to the study published this week, “including feathered dinosaurs.”

Above: illustration of Anchiornis huxleyi by Michael DiGiorgio, via Yale

The study showed that two 50-million-year-old bats were also able to have their skin colors detected. Both creatures were originally a reddish brown color – no big surprises there.

“This means that the correlation of melanin colour to shape is an ancient invention, which we can use to easily determine colour from fossils by simply looking at the melanosome shape.” 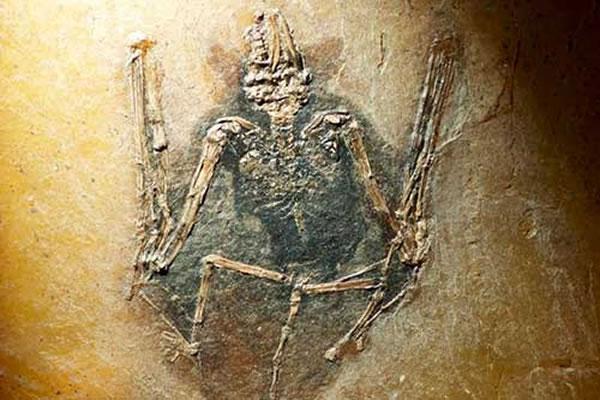 Above you’ll see one of the bat fossils used in this study. While we’re excited for scientists and researchers to use this newfound knowledge to identify the colors of all manner of dinosaurs, for now we’ve just got the bats and A.huxleyi up above.

You can learn more about the colors of ancient creatures in the paper “Chemical, experimental, and morphological evidence for diagenetically altered melanin in exceptionally preserved fossils” as authored by Dr Jakob Vinther, Caitlin Colleary, et. all as published by PNAS. This paper is published under code doi: 10.1073/pnas.1509831112.