Earlier this week, Microsoft announced that Project xCloud game streaming will be launching on Android on September 15th. Since Project xCloud will be offered as part of Xbox Game Pass Ultimate, that means Game Pass will be coming to Android as well, which is a pretty big move for Microsoft. Earlier today, Samsung unveiled the Galaxy Note 20, and given the proximity of these announcements from Microsoft and Samsung, it probably should be surprising to see the two companies join forces.

Xbox Game Pass Ultimate was briefly mentioned in Samsung’s announcement earlier today, but now we’re getting a better understanding of just what this partnership entails. In a post to the Windows Blog, Microsoft explains that the Note 20 and the Galaxy Tab S7 will be “the best way to pick up and play games directly from the cloud.”

This partnership doesn’t begin and end with the two companies complimenting each other, though, as Microsoft also says that Samsung will offer a Gaming Bundle with Note 20 pre-orders. The Note 20’s Gaming Bundle will come with three months of Game Pass Ultimate, so it sounds like there isn’t a promo that’s going to give Note 20 buyers a subscription to Xbox Game Pass for free.

However, the Gaming Bundle will also include a MOGA XP5-X controller from PowerA, along with a phone clip that’s compatible with the Galaxy Note 20. Essentially, the Gaming Bundle outfits you with the hardware you need to play Project xCloud games on mobile. 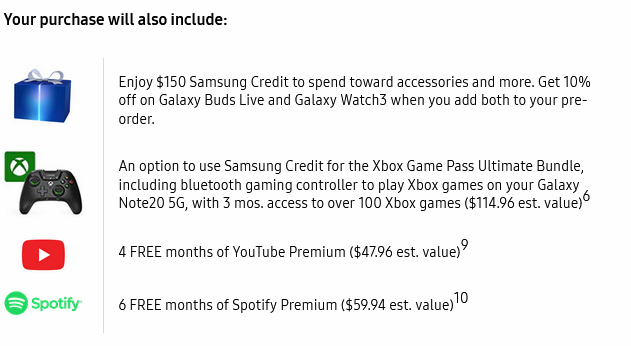 As for how you actually get the Gaming Bundle, the process is a bit confusing. It doesn’t seem like you can buy a bundle outright; instead, when you head to the Samsung Store to pre-order a Note 20, you’re told that you’ll receive a $150 Samsung Store credit that can be put toward other products, including the Gaming Bundle. Of course, you don’t necessarily need to buy the Gaming Bundle with that credit, as you’ll be able to get the controller and the clip elsewhere when Project xCloud comes to Android in September.