A Siri iWatch could dominate wearables

Oh, the irony: tech manufacturers by the dozen attempting to dissuade you from pulling an iPhone from your pocket, and it might be Apple that actually manages it. That’s not to say the Cupertino giant – or the rumored “iWatch” – is aiming to replace the iPhone, only leave it snug in your jacket or purse more of the time by shunting glanceable functionality to your wrist. It’s a strategy we’ve seen several other manufacturers (most notably Pebble, currently glowing rosily from its multi-million Kickstarter success) try, but there are some very good reasons why Apple could be the firm to take the smartwatch mass-market.

To recap, if you’ve been wearing your Apple rumor tin-foil hat: speculation around an Apple-branded smartwatch reawakened over the weekend, with both the WSJ and NYT chiming in with sources claiming a digital timepiece accessory was in testing. Adding to the intrigue is the suggestion that Apple is already talking production plans with long-time manufacturing partner Foxconn, and that the wrist-worn gadget is believed to use a special curved glass display.

That curved display – which has already seen connections drawn with Corning’s Willow Glass, a super-thin, super-flexible material that could feasibly be used to produce wraparound devices – would be a slick differentiator, given we’re still generally waiting for the technology to reach the mass-market. Other smartwatches, such as Pebble, have curved fascias but the displays themselves underneath are flat.

There’s always been some degree of excess bulk, then, balancing the desired usability of a larger screen with the aim of making as small a watch as possible. Pebble is one of the best designs for that we’ve seen so-far, but it’s still not tiny, and that could dissuade less geeky users from wearing it. 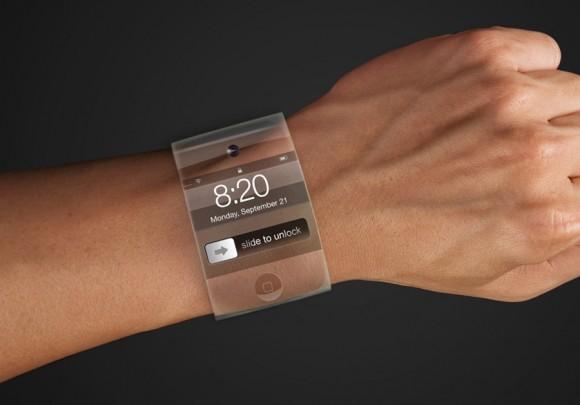 With a curved screen, however, Apple could wrap its iWatch around the wrist, rather than have the display sitting atop it in one lump. That’s not to say the likely form factor will be akin to the eye-catching render above by ADR Studio, twisting fully around the wrist. Instead, it’s far more likely that Apple might form a partial loop from Willow Glass, hugging the edge of the wrist to minimize bulk, with a more traditional strap arrangement closing the remaining gap.

Having clever friends in the components and manufacturing industries is a good start, but it takes more than slick hardware to get people to buy your gadget: you need solid functionality if you want users to ditch their existing watch and strap on an iWatch instead. Apple’s two strengths there are the tight control it has over the iOS architecture, and the only-partially-tapped functionality offered by Siri.

Ruling iOS with an iron rod has paid dividends for Apple, enabling the sort of smooth user-experience only really delivered when hardware and software are carefully tailored to each other. When you’re talking about adding another persistent wireless connection – even if it’s Bluetooth 4.0 based, the most power-frugal iteration so far – you’re also adding another potential source of battery misery. It’s the same issue that has left previous smartwatch attempts dumped, unloved, in desk drawers.

If, however, Apple can effect that sort of continuous connectivity without necessarily wiping out the iPhone’s battery life, that’s one considerable reason to opt for the official accessory. An own-brand iWatch would also be able to bypass the data access frustrations that have made companion apps, such as the software iOS users must run in order to use Pebble, such a tricky business. Apple is cautious with what third-party developers can get their digital fingers into, but its own coders have no such limitations.

[aquote]Pebble and others will show you information, but they’re not great at letting you react to it[/aquote]

Once you’ve got that tight integration, Siri steps in. Apple’s voice control system is already making inroads as a safer way of using a phone or tablet while in the car; divorced from the iPhone or iPad itself, it could be even more useful. Pebble, Sony’s SmartWatch, and other models all suffer the same problem: they’re useful for showing you information, but not so great at letting you react to it. 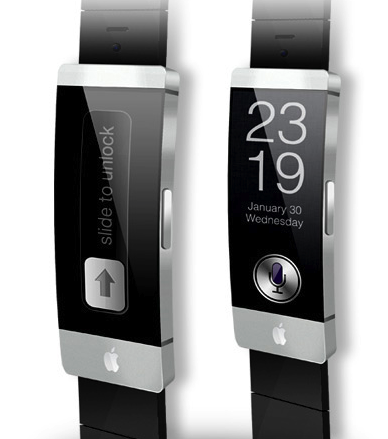 So, you can can generally see emails, calls, messages, and other alerts come in, but if you want to do anything especially meaningful with that information, you’ll need to get your phone out of your pocket. With remote Siri access baked in, however, Apple’s smartwatch could bypass the limitations of its display and/or physical controls, and allow you to respond to new data by voice.

It’s broad two-way interaction that is Apple’s real advantage here, though the possibility of course don’t end there. The onboard Nike + iPod functionality built into the iPhone could obviously be expanded with wrist support, both collecting pedometer and other information, and displaying your fitness progress in a more persistent way. Then there’s the possibility of apps on your wrist, a small secondary display for third-party developers to experiment with.

Apple undoubtedly plays with prototype designs all the time, and not everything makes it to stores. The company is also known for waiting until there’s a wide market, not necessarily a small quorum of geeks, to sell to. So far, the smartwatch audience has been a small one, but with a little Siri and some styling magic, Apple could blow it wide open.