Nintendo, it seems, has something brewing behind the scenes. The company has filed an application with the FCC for a mysterious new device, but unfortunately, there are only some tiny details we can glean from the filing because of a Nintendo request for privacy. Still, the details that are obvious from this filing are more than enough to pique our interest.

The filing was first discovered by the sleuths over at Video Games Chronicle, but much of the details of this filing have been held back because of a confidentiality request from Nintendo. The company has asked the FCC to keep the contents of this filing private for 180 days, which suggests that whatever this is, Nintendo may be ready to announce it in six months.

Anyway, while that FCC filing doesn’t include a diagram that shows us the shape of the device, it does tell us that this is a game controller. It has a model number of HAC-043, with VGC pointing out that the Switch and all of its peripherals have model numbers that begin with “HAC.” We also learn that the controller can be charged by the Switch’s AC Adapter – model number HAC-002 – which means that it has a USB-C port on it. 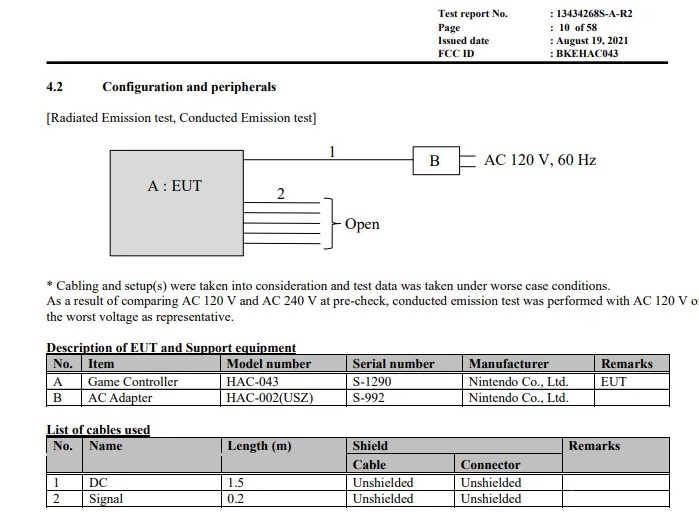 Beyond that, we’re entering into speculation territory. One thing of note is that the SNES controllers Nintendo launched for the Switch have a model number of HAC-042, which may suggest that this controller could be something similar. Nintendo may be prepping a new controller to go along with the addition of new retro games to Switch Online.

There’s been speculation about whether or not Nintendo will add retro games from other eras to its Switch Online service for quite some time now. Just recently, we heard rumors which claimed that Nintendo will add Game Boy and Game Boy Color games to the Switch Online library in the future, so perhaps this new controller is related to that? We’ll just have to wait and see because, unfortunately, the FCC filing doesn’t tell us much at the moment thanks to Nintendo’s confidentiality request.