There are late diagnoses and there are long overdue diagnoses, and figuring out a dinosaur that died 76 million years ago had aggressive cancer probably falls into the latter category. New research used modern diagnostics on very old bones, to figure out that a long-dead Centrosaurus apertus had the first identified case of dinosaur cancer.

A horned dinosaur with large hooks that extend from the backs of their frills, Centrosaurus closely resemble the far better-known Triceratops. Herbivores, they lived in sizable groups and could grow to up to 18 feet in length.

Examples of fossil remains for the species were first discovered decades ago, but it’s only now that the unexpected medical condition was identified. Researchers from the Royal Ontario Museum (ROM) and McMaster University found evidence of an osteosarcoma – an aggressive, malignant bone cancer – for the first time in a dinosaur, in the fibula or lower leg bone. 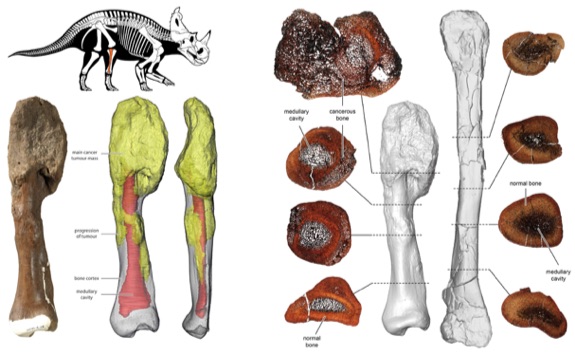 The bone itself was first found in 1989, at the so-called Dinosaur Park in Alberta, Canada. At the time, however, its malformed end was believed to be the result of a fracture that had healed poorly over time. By 2017, though, its unusual shape was spotted by researchers, who used modern medical techniques from pathology, radiology, orthopaedic surgery, and palaeopathology to evaluate the bone from the perspective of how similar it was to a human patient with the cancer.

“After carefully examining, documenting, and casting the bone, the team performed high-resolution computed tomography (CT) scans,” the ROM explains. “They then thin-sectioned the fossil bone and examined it under a microscope to assess it at the bone-cellular level. Powerful three-dimensional CT reconstruction tools were used to visualize the progression of the cancer through the bone. Using this rigorous process, the investigators reached a diagnosis of osteosarcoma.”

Though the cancer could well have spread to other parts of the dinosaur, what’s surprising is that it’s not believed to be the cause of its death. Instead, the fossil remains were discovered as part of a huge bonebed, believed to be caused when a large herd of Centrosaurus were caught and killed in a flood.

That the dinosaur managed to last that long is a sign, paleontologists suggest, of the value of a herd lifestyle. “The cancer would have had crippling effects on the individual and made it very vulnerable to the formidable tyrannosaur predators of the time,” Dr. David Evans of the ROM explains. “The fact that this plant-eating dinosaur lived in a large, protective herd may have allowed it to survive longer than it normally would have with such a devastating disease.”

While the diagnosis may have come far, far too late for dinosaur cancer treatment to be an option, that’s not to say it’s of no value for modern osteosarcoma patients. By joining the dots between species that lived tens of million years ago, with humans today, researchers hope to better understand the genetics of cancer and how they evolve. That could lead to development of new treatment regimens.