Ever heard of Microsoft Surface? I’m sure you’ve seen the videos before but if you haven’t we have a new one below. This is the technology that brings a full capacitive multitouch tablet like surface to your coffee table, dinner table or any other large surface only our hands-on below is with a 46″ tabletop.

We’ve seen similar offerings hit mass production from the likes of Samsung and now everyone else seems to be rushing to get their own out. Today at CES that is exactly what 3M Touch Systems had on display for our team at SlashGear to enjoy.

3M took things a step further than the competition and showcased their 46″ Projected Capacitive Technology display that is capable of multiple simultaneous users with a 60 touch point capacitive screen. 3M’s device will allow 4 split screens for users to multi-task, multi-touch, and anything else you can think up at the same exact time. 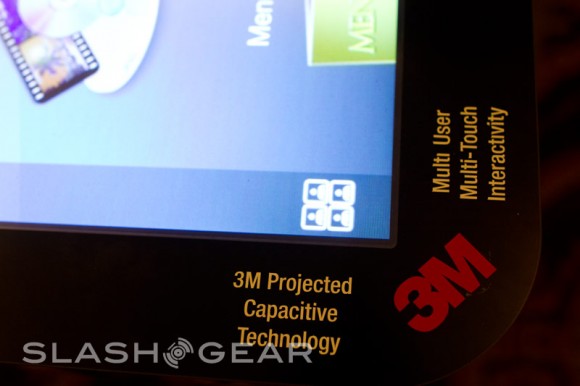 We quickly gave this tablet-like table a run to see how well it would fair and while it’s only a prototype — the results were more than pleasing. The capacitive touch was extremely responsive although pressure sensitivity could use some adjustment. In the video demonstration below you can see near the end I can swivel, rotate, and resize all without a stutter or delay in video playback. Impressive right?

Now I just need one in my coffee table, bathroom mirror, and anywhere else that would be unnecessarily awesome.