A 3D-printed cast concept, more flexible and wearer-friendly than traditional plaster cast for break and fracture patients, is the latest potential application of advanced materials manipulation. The design, dubbed the Cortex Exoskeleton, is the handiwork of Jake Evill, and could potentially deliver more structured support for broken limbs while also being lighter, stronger, and more convenient than existing options.

Traditional plaster casts – also known as orthopedic casts – use some form of thermo-setting material and bandages to form a solid husk, within which the broken limb can heal. Historically, the material of choice has been plaster of paris, a form of finely-ground calcined gypsum which, when mixed with water, eventually solidifies around a skin of bandages. Alternative options include polyurethane or even thermoplastic bandages.

However, no matter the substance, these casts generally suffer the same issues. Susceptible to water, they leave the wearer encountering difficulties when bathing, as well as opening up potential hygiene problems for the encased limb itself. They can also be itchy and uncomfortable, as well as bulky.

Evill’s Cortex Exoskeleton concept addresses those factors using advanced 3D printing techniques. An X-ray of the break is combined with a 3D scan of the limb, and then a custom sleeve is printed, complete with extra “membrane” structuring around the exact point of the injury. 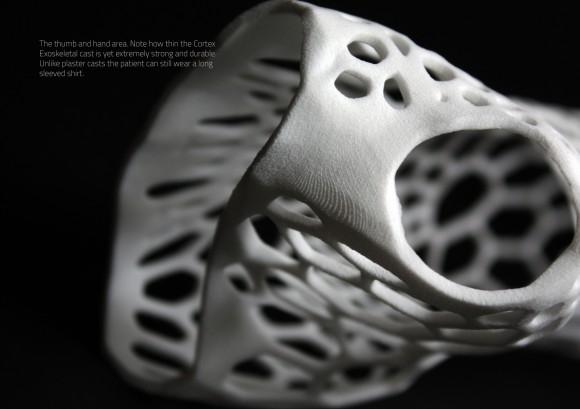 Out of the printer, the cast is left hinged and unfastened, so that it can be fitted around the wearer and then snapped shut, using integrated fasteners. Even when closed, however, the limb is still open to washing – and the cast itself is waterproof – while also being slim enough that a regular shirt sleeve will fit over it.

The nylon structure would take some time to print, roughly three hours it’s estimated, from the algorithmically-calculated CAD plans, but once produced would immediately be durable; that’s unlike existing casts, which demand a period of up to three days to set fully solid.

Cortex is, of course, just a concept at this point, but Evill points out that it addresses the growing issue of medical waste and a rising number of fractures and breaks. 3D printing is increasingly being turned to for one-off and highly customized production jobs, being used for purposes as varied as making hair-thin space craft, replica Aston Martins, and of course guns.