3 vital Pokemon GO tips on how to catch em all, Silph Road style

This week we’re having a peek at 3 ways in which a trainer would have to up their game to catch em all in Pokemon GO. Thanks to the helpful efforts of OKTimeForplanB at The Silph Road on Reddit, we have all the regional Pokemon on a map. We also have the several ways in which Pokemon must be caught in order to fill out the full Pokedex. We’re also running down the Pokemon that aren’t actually in the game yet – even though they’re part of the Pokedex.

Several Pokemon are available only in certain regions of this planet. One of these regions is North America – in this region we have the Gen 1 Pokemon Tauros. This Pokemon is relatively common in the USA and Canada. Kangaskhan is on the other end of the planet – so to speak – living exclusively in Australia. Apparently there are as many Kangaskhan in Australia as there kangaroos and snakes combined. They too aren’t particularly rare there. 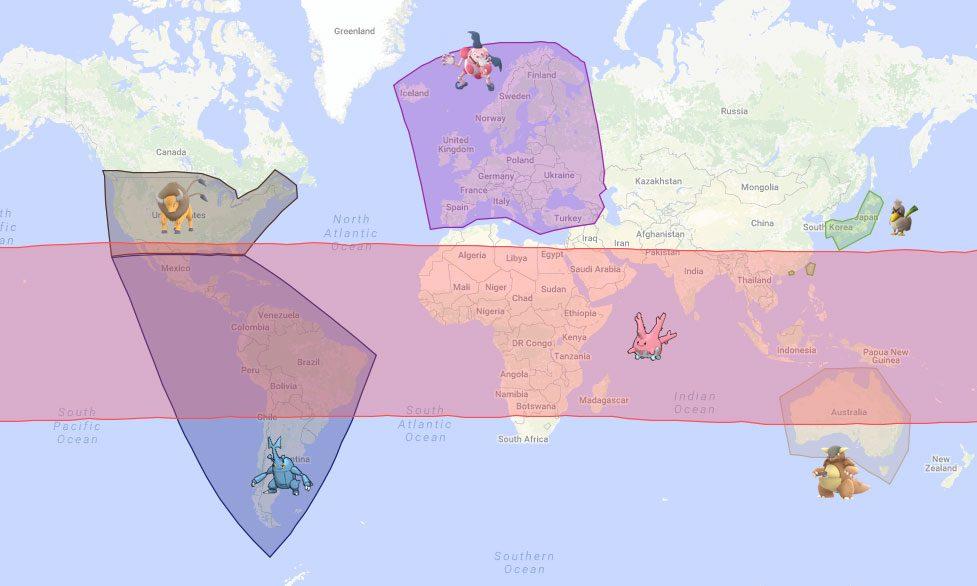 Mr. Mime is exclusive to Europe – this includes the UK and the larger bit of the European Union. This is one positive feature of being part of the EU that the Brexit could not axe. At least, not yet, anyway.

Farfetch’d pops up in several countries in Asia. See this bird Pokemon pop up in Tokyo about as commonly as your average 2nd-tier evolution Pokemon. Think of him as a Raichu – and don’t be surprised if he doesn’t show up during your 2-day visit.

Heracross (2nd Gen) appears in South America, filling out another part of the regional puzzle. For those that don’t want to travel all the way to Mexico, there’s also been reports of a few popping up in Texas. Similar stories for Corsola, who only lives in the hottest regions.

Corsola has been found across the equator in quite a few different countries. Watch for Corsola in the USA in both Texas and Florida. Florida has it good for regional Pokemon, with the chance of seeing monsters from three distinct – but sometimes crossover – regions of the world.

Pokemon Eggs are now wildly diverse, with 30+ Pokemon appearing in both the 2KM egg and the 5km egg. For those Pokemasters looking for the most powerful Pokemon in the game – SOME of them are included in the 10KM egg. The 5KM egg shouldn’t be counted out as useless, though, as super-rare Pokemon like Porygon and Lickitung can be found there.

Of note – no regional Pokemon are available in Pokemon eggs. While there MAY have been regional Pokemon in eggs in the past, now only Pokemon that are not region-exclusive can be hatched here. You’re going to need to go to Tokyo to get Farfetch’d – you might as well face it!

3. Not Yet Released To The Wild

Several Pokemon are not yet available in the game. These include Legendary Pokemon, Mythical Pokemon, and a few oddities. Some Pokemon are still sitting in wait for the right time to launch – one bird, in particular, waiting for Christmas 2017.

To get these Pokemon you’ll just… have to wait. They’ll be coming sooner or later – they’ve never left the code since they first appeared!

Now get up and get out and get something! It’s time to catch them all – obviously not all in one day, as that’d require Santa’s Sleigh to accomplish. But over the next few years, sure – it can be done!

Some content from this article was sourced VIA The Silph Road on Reddit. The Silph Road is a hardcore resource for Pokemon trainers that wish to get so extremely involved in Pokemon GO that they cannot function outside the Pokemon universe. I go there quite often and peruse the madness, and do indeed participate. Have a peek at our own Twitter portal @TeamPokemonGO to keep up with all the details!