One GTS badge; two wildly different cars. The 2022 Porsche 911 GTS sees the return of what has quickly become a modern icon: three letters that signify a car all about delighting the person behind the wheel. Porsche, though, knows its market well, and for the 992-series GTS that means both flexibility and surprise. 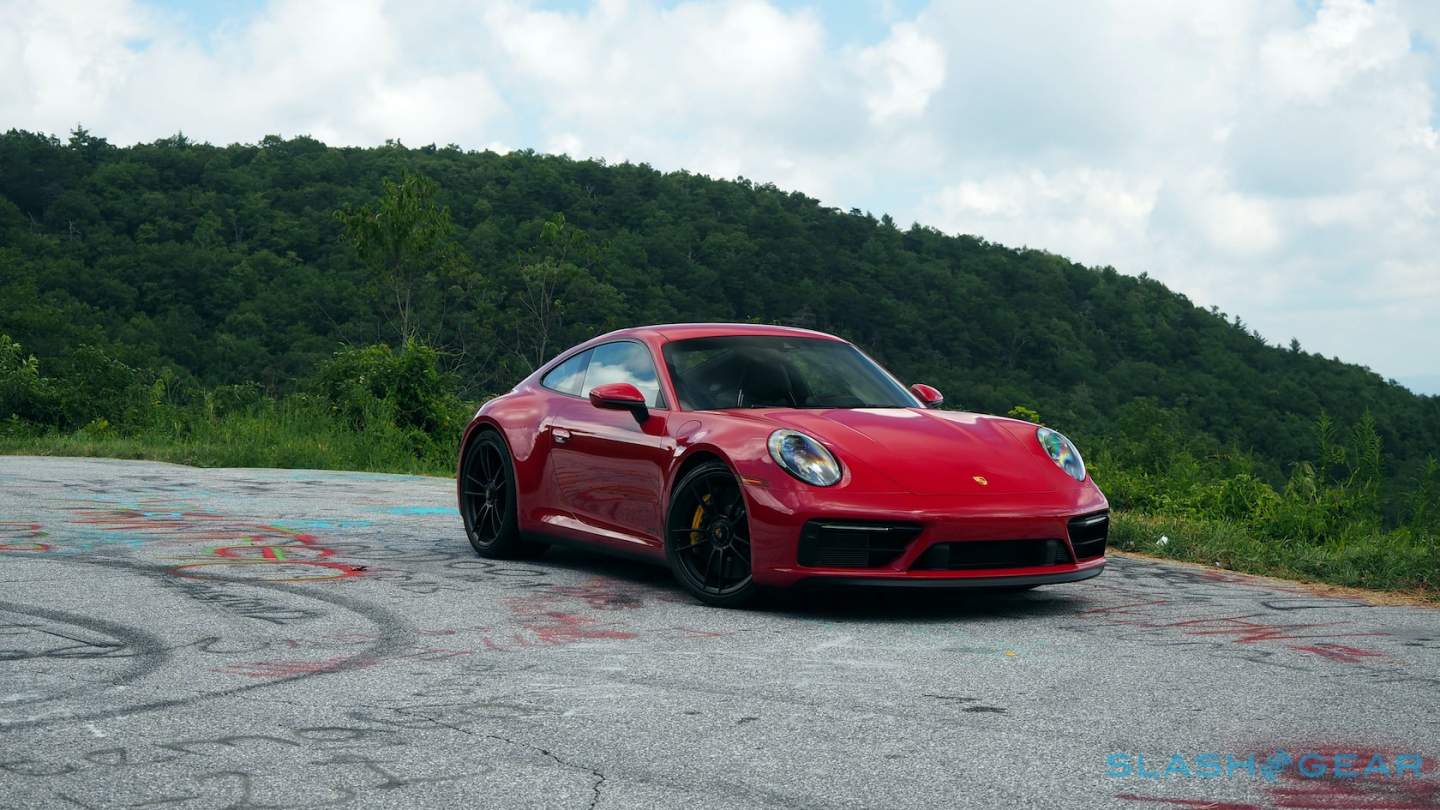 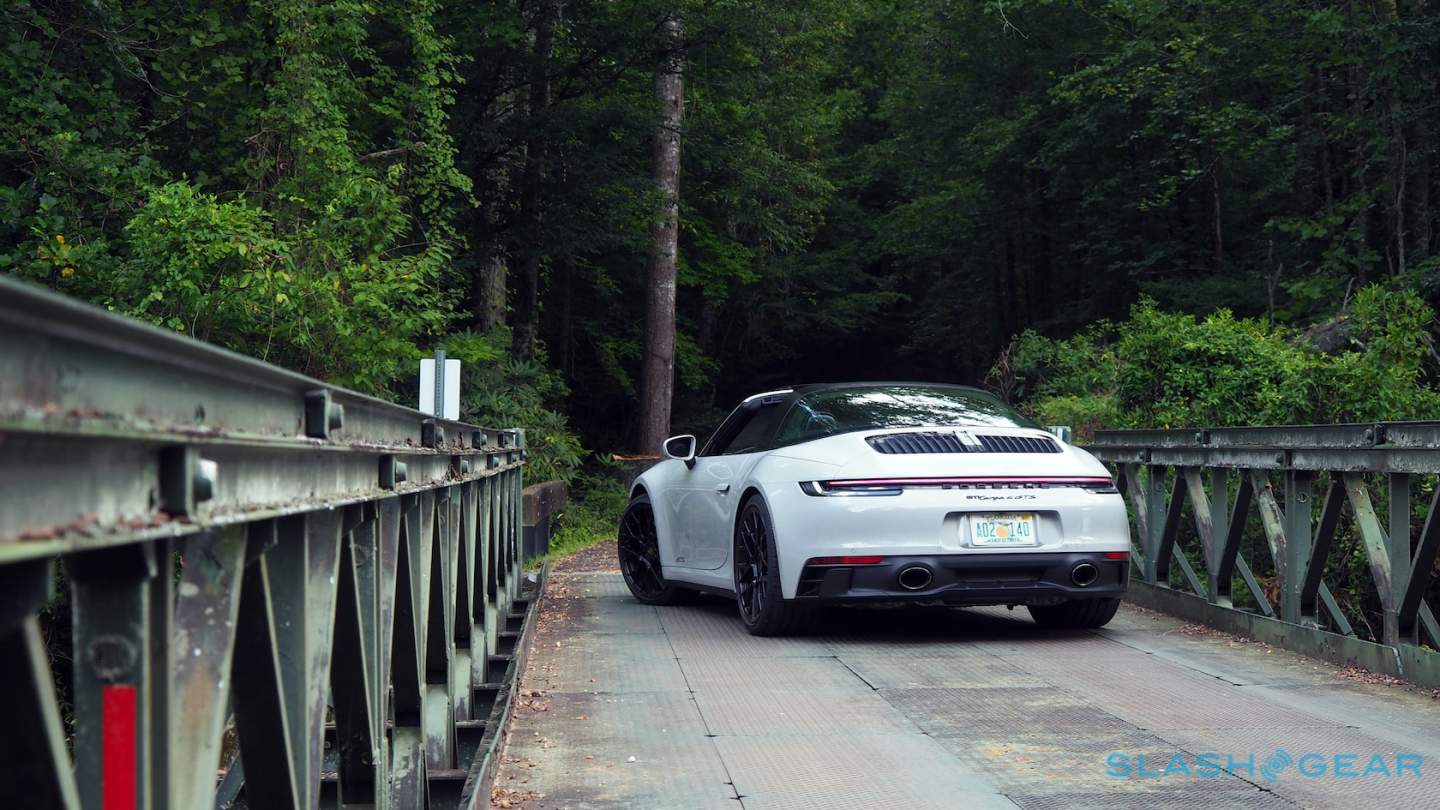 Turns out, based on past demand, Porsche expects the Targa to be the best-selling version. On paper, you can understand why: the flexibility of a convertible, the refinement of a (partial) hardtop, and the reassurance of all-wheel drive. True, it rides a little higher than the GTS coupe – which is 10mm lower – and most people will spec the PDK transmission rather than a manual, but that’s no big deal. Right? 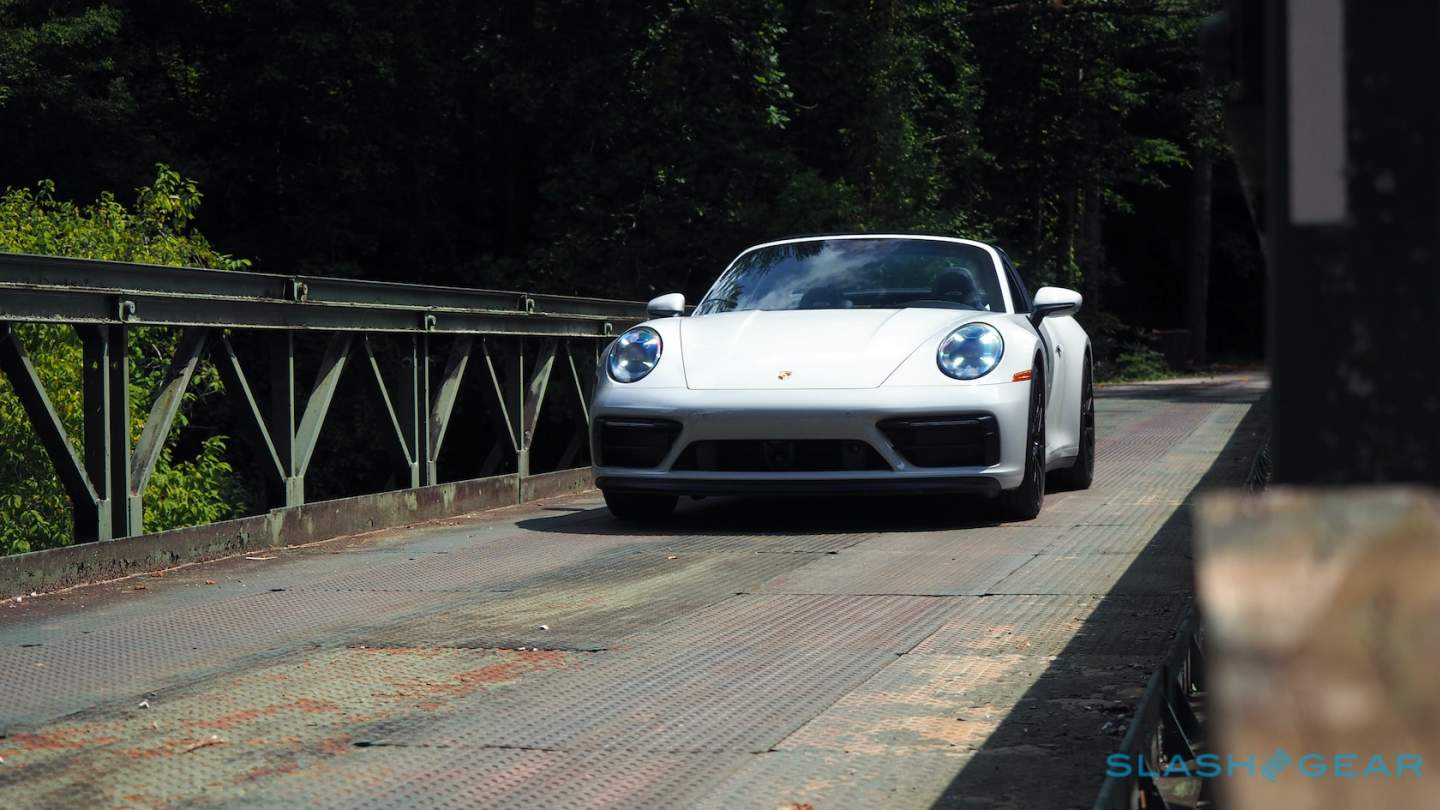 I started out the day in the Targa, and sure enough the 911’s reputation as the sports car you can use as a daily driver was in full and clear effect. It’s tough to argue with the conclusion that Porsche makes the definitive two-door, regardless of the roof type. And frankly, I’m already a big fan of the 911 Targa and its blend of engagement and comfort.

After the big GTS billing, though, I couldn’t help feeling a little… underwhelmed. The 911 Targa 4 GTS is exceptionally competent, and – with 0-60 mph arriving in 3.3 seconds with the PDK and the Sport Chrono package – fast; it’ll do 190 mph and the transmission is equally smooth and swift. From behind the wheel, though, it was pleasing, just not quite the visceral encounter Porsche had promised. 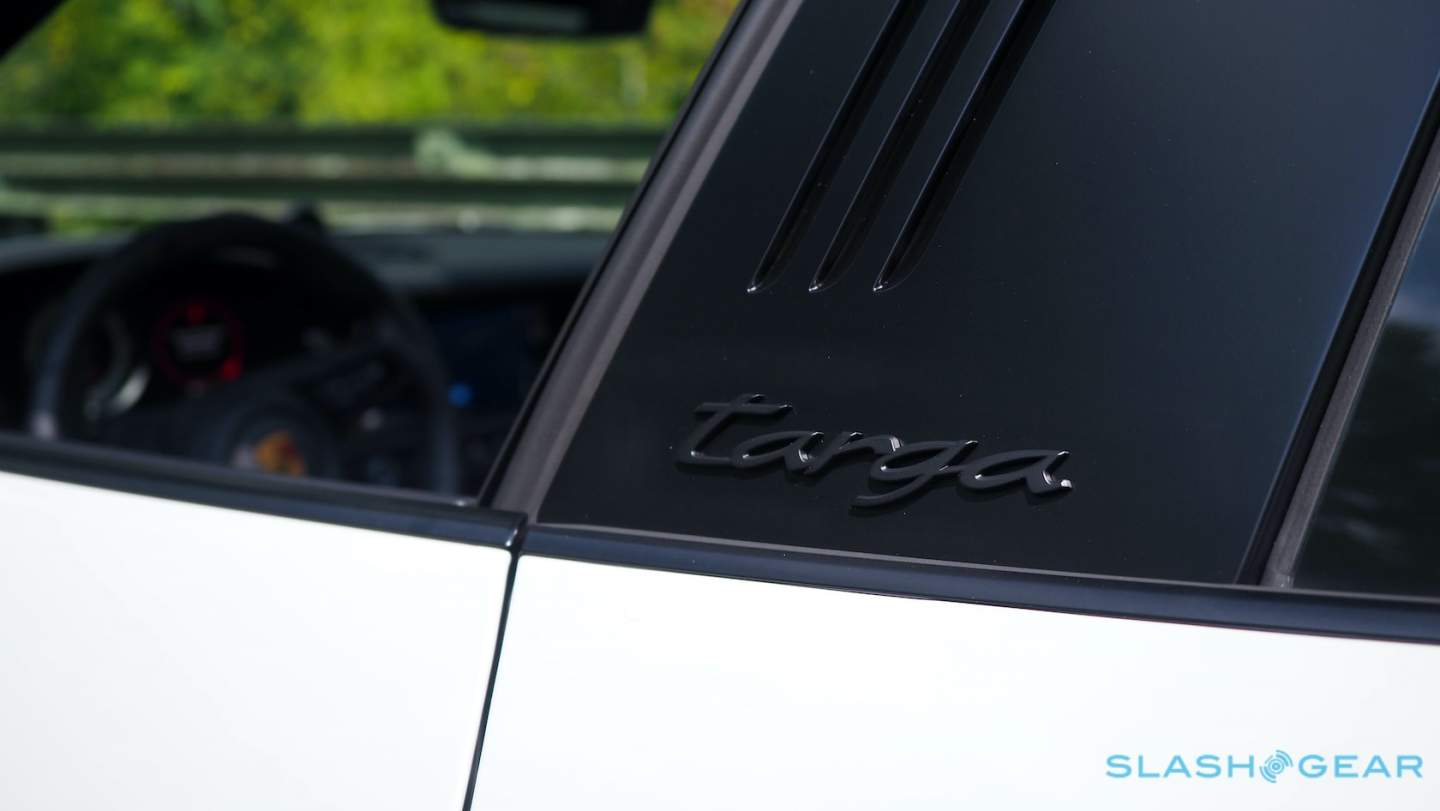 Much like the experience of putting on a new set of glasses with an updated prescription, however, it took climbing into the 2022 911 Carrera GTS coupe to see what I’d been missing.

If you wear glasses, you’ll know the feeling. Suddenly everything is crisper, sharper; you wouldn’t have necessarily said that your old view of the world was bad, but in comparison it’s night and day. The same goes for the GTS. 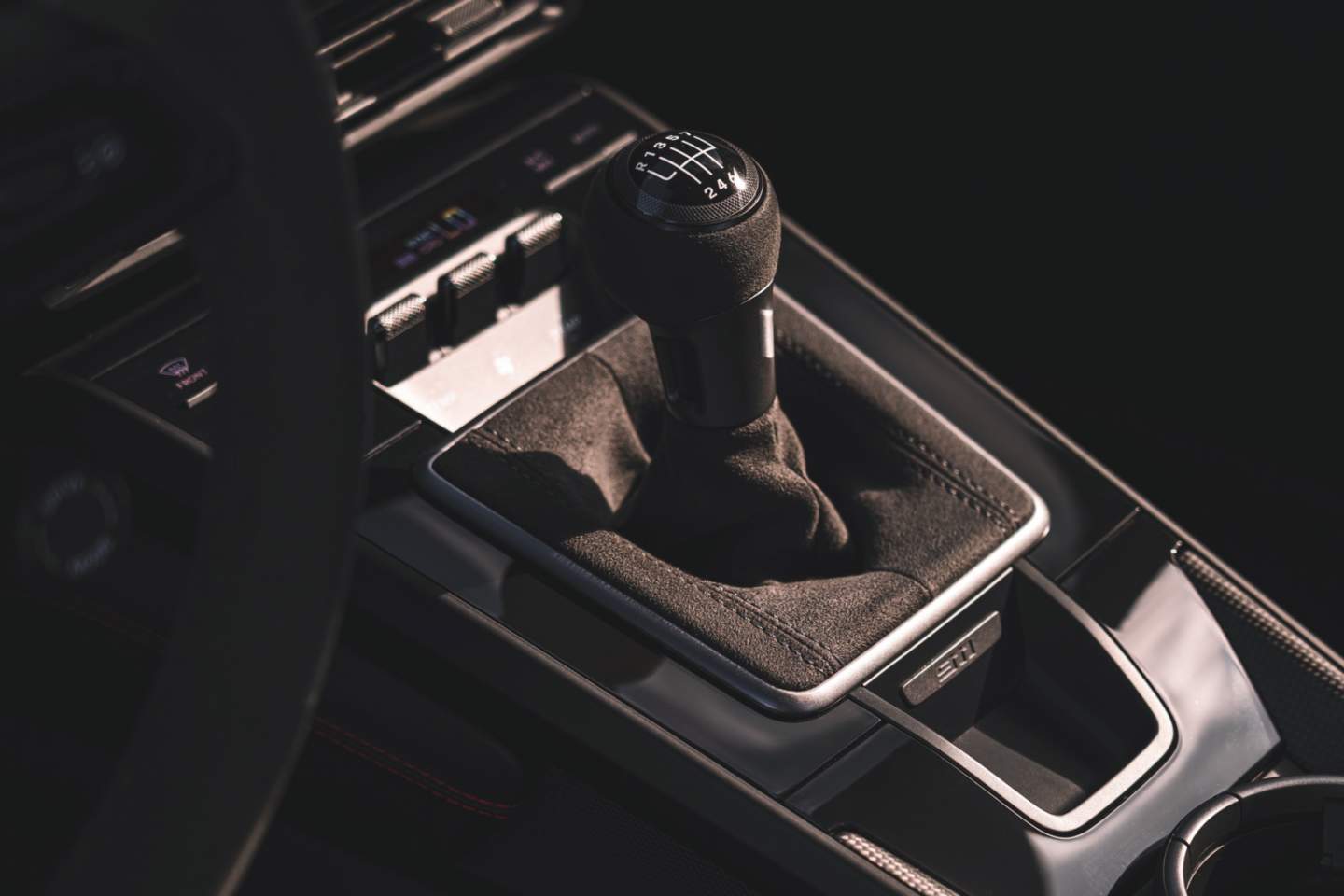 Porsche’s sublime seven-speed manual transmission is key to that. Most of the time, I’ll confess, the hype around rowing your own gears can feel a little forced. We’re far from the days where automatics were lumpen and laggardly: at this point they can shift faster than us mere humans ever could, and often more intelligently, too. Deciding to opt for the third pedal, then, needs to be a conscious choice, and one based on it actually improving the overall experience in some way.

Here is fine evidence of that theory. With its short throw and perfect weighting, the 911 GTS’s manual snicks and slots beautifully. It takes, admittedly, a little familiarization: the ratios are close, and it’s easy to get lazy and then find you’ve accidentally tried to upshift from second to fifth when you were aiming for third. Even so, it’s a gearbox that makes you want to improve each time. 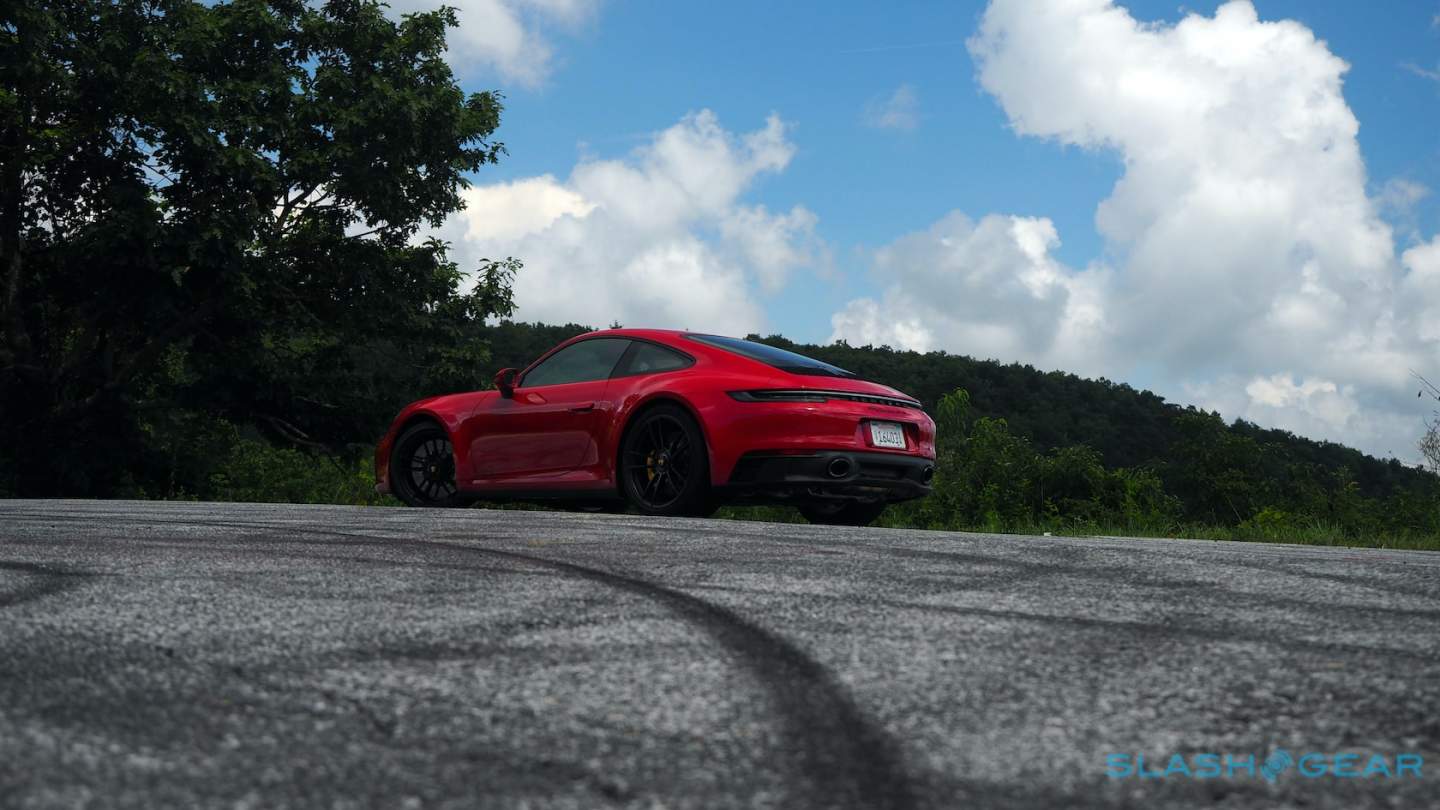 It’s part of an overall package that, by tiny measures that combine to something inescapably meaningful, elevates the GTS coupe. Porsche doesn’t overwhelm you with drive modes, or throw the electronics in your face. Sure, there are stability systems and traction control and everything else you’d expect from a modern day sports car there, but it’s entirely possible to look between all that and feel that sense of engagement so many people seem to find lacking in the 911’s counterparts.

The GTS is fast, but it’s not outlandishly fast. That’s a good thing: stupid levels of power ends up, perversely, being a limitation. There are only so many places you can stretch the legs of your 600+ horsepower supercar, and that’s rarely – morally or legally – on a public road. 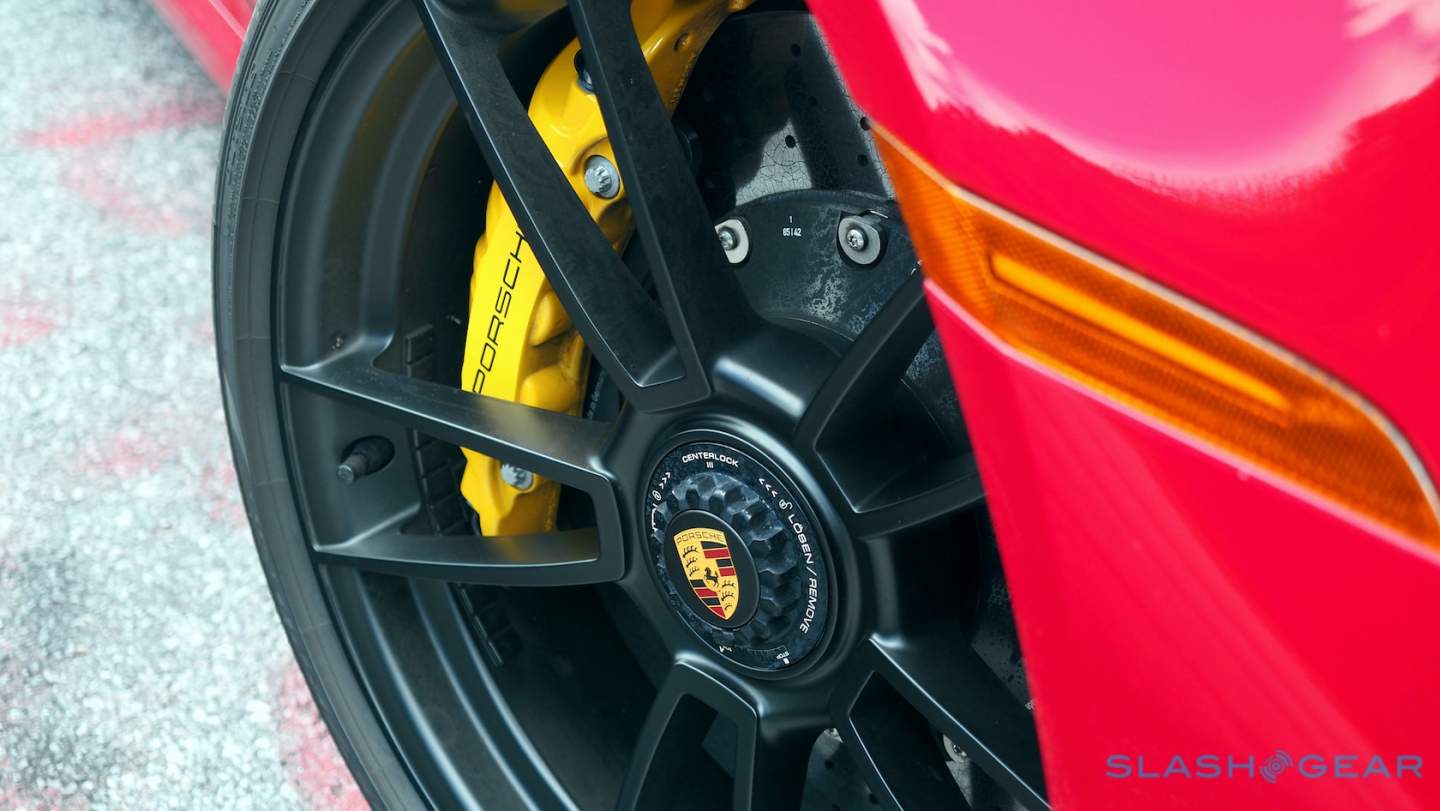 473 horsepower and 420 lb-ft of torque are perfectly fine here, as is the sound from the twin-turbo flat six-cylinder through the GTS sports exhaust. 0-60 mph in the manual takes 3.9 seconds, the 911 positively dawdling compared to the PDK and its 3.2 second run. Nonetheless, straight line speed absolutely isn’t what this car is about. 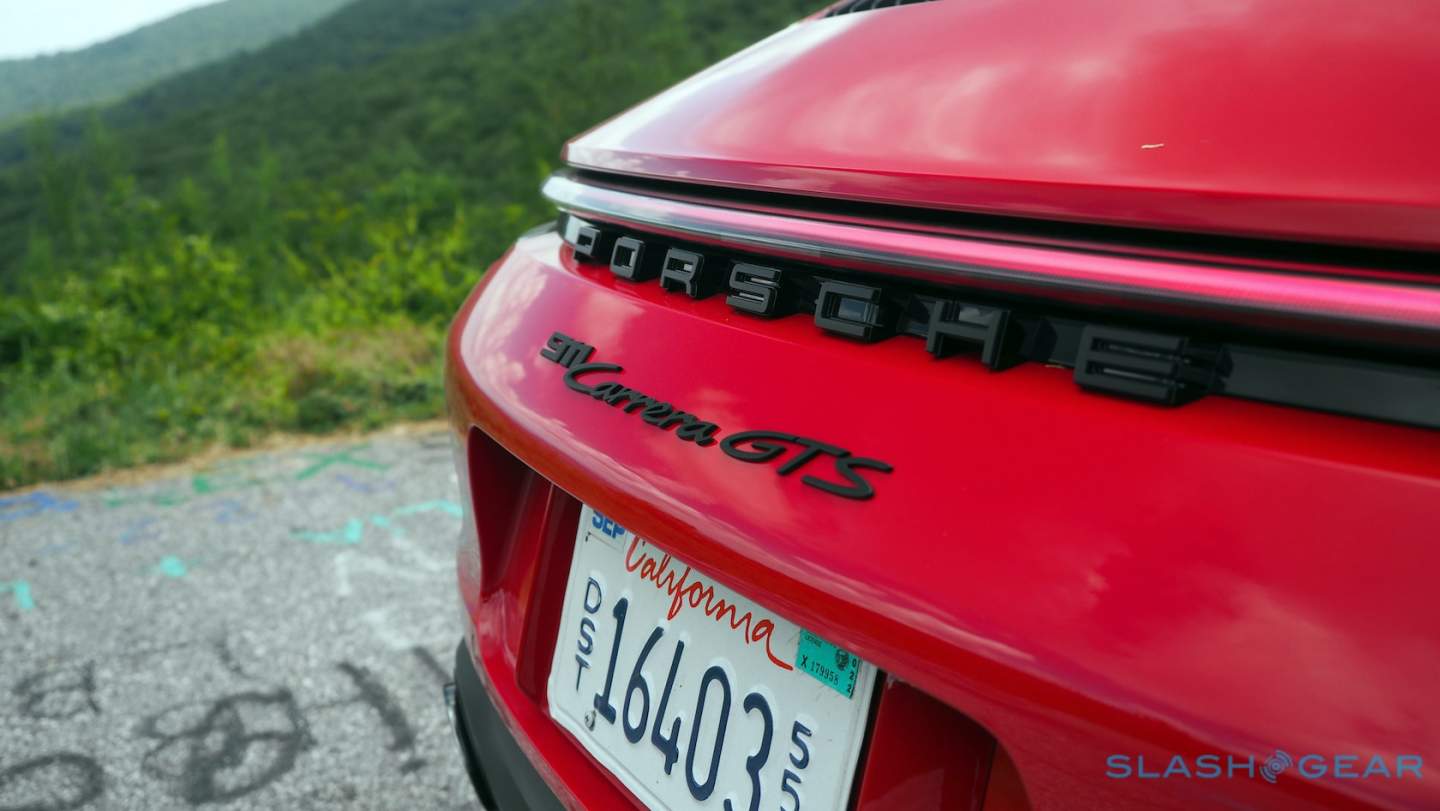 Faced with a set of sweeping mountain roads, the 911 swoops and eases through them with beguiling poise. You’re neither disconnected from the asphalt underneath you, nor so tuned into it that ever rut and pothole shakes loose teeth. Slipping between second and third gear is all it usually takes to maintain that rhythm and keep the smile firmly glued to your face.

Brakes borrowed from the 911 Turbo do an excellent job of hauling the GTS to a halt without feeling grabby or, for that matter, showing any real signs of fade. 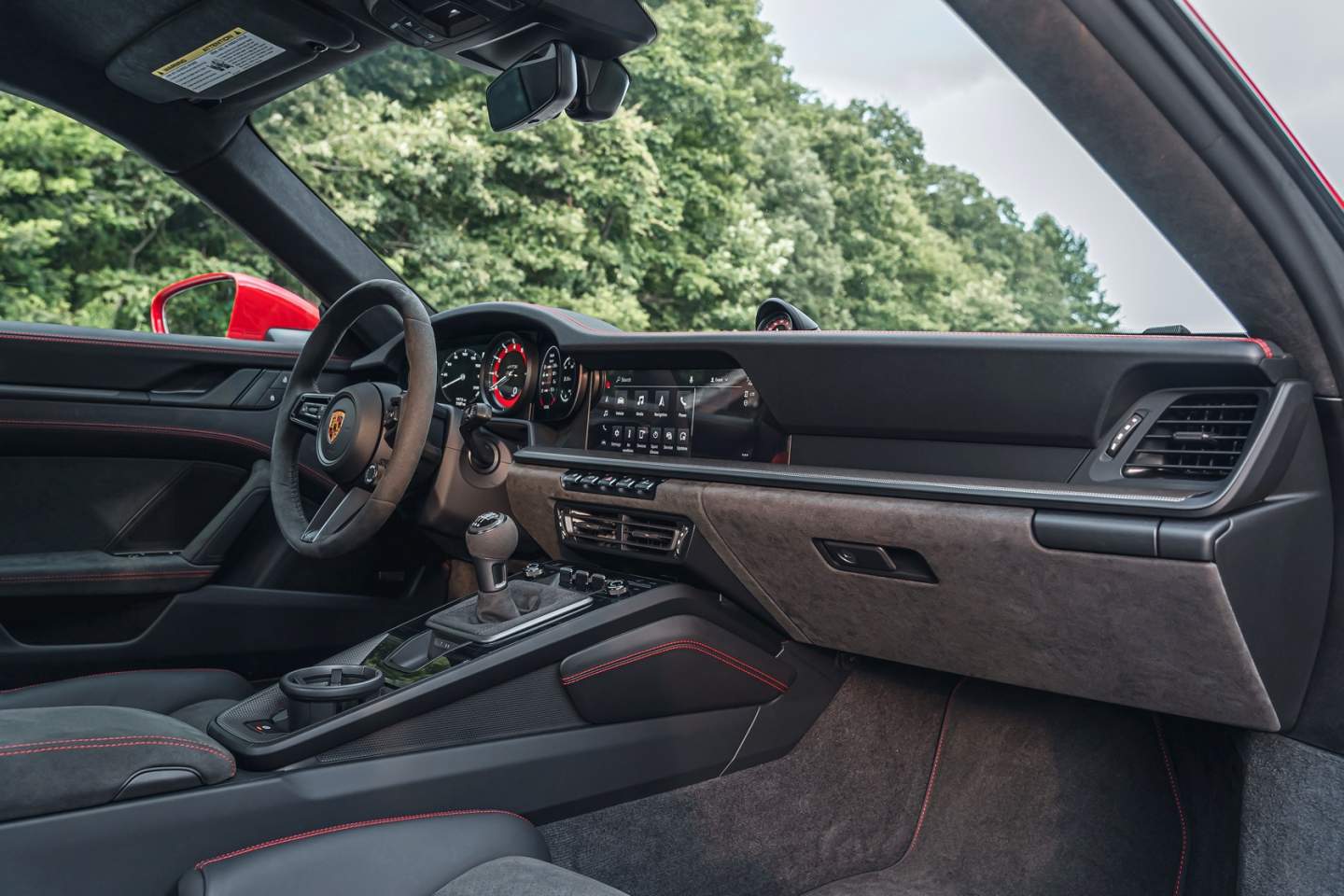 As the backroads took their inevitable turn into blander highways, and the navigation showed a long red cord of stop-start traffic ahead, I’ll confess I did have a moment’s pang of envy for the easy PDK. Turns out, I shouldn’t have worried too much. Sure, being sat in congestion when the clutch is your responsibility isn’t exactly fun, but neither is the 911’s gearbox much of a chore. It’s easy to modulate and I didn’t clamber out at the end with one very tired leg. 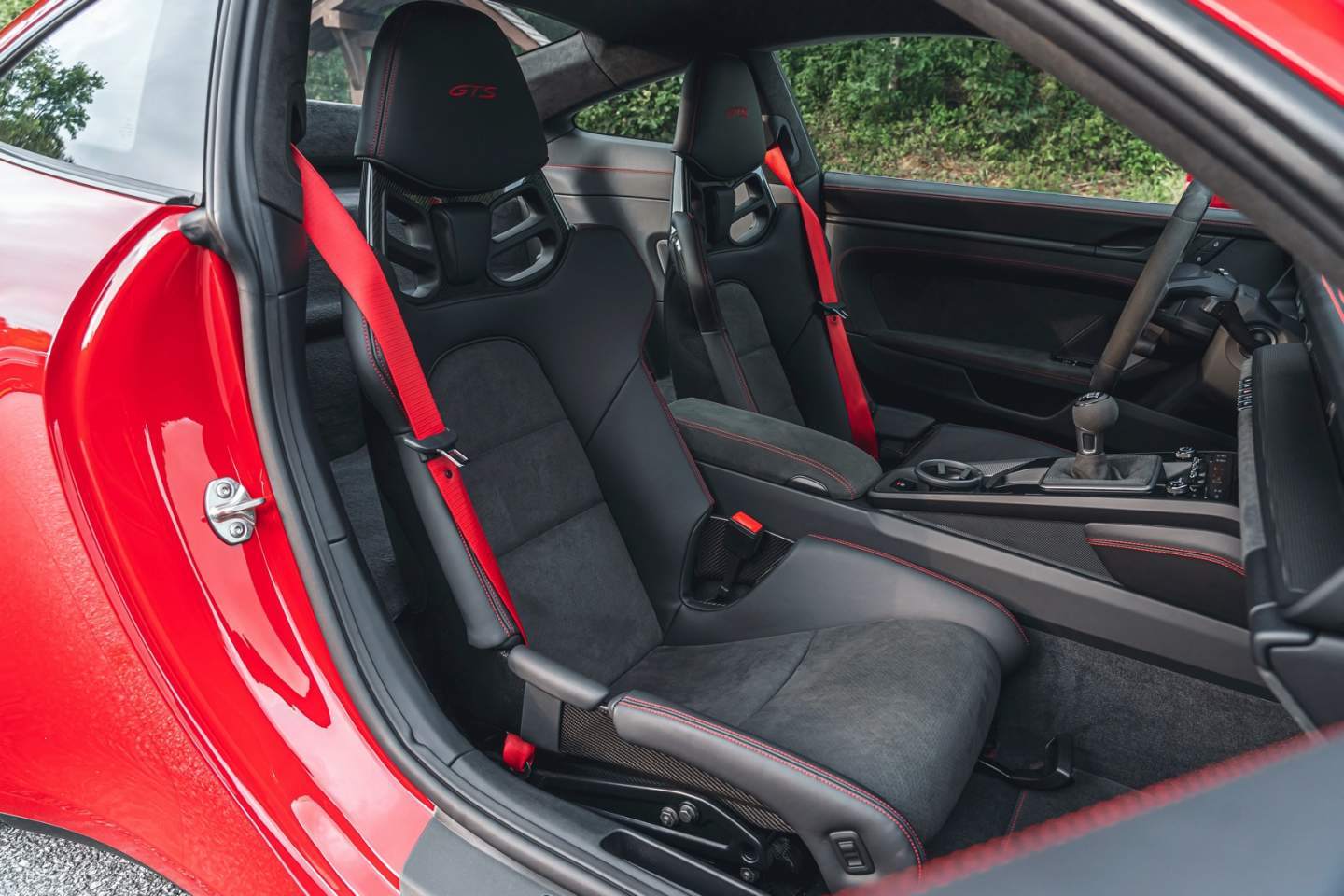 The 911’s cabin helps there, though depending on your body shape you might have to compromise on “perfect” spec. The $5,900 Lightweight Design Package swaps the comfortable regular sports seats for carbon fiber reinforced plastic (CFRP) buckets, in addition to switching the side and rear glass to lightweight panes, and ditching the diminutive rear accommodation. Perhaps my arms and legs just aren’t up to the Germanic ideal, but the bucket seats – which slide back and forth, but can’t be adjusted for backrest tilt – proved a little less flexible than I’d have liked.

Elsewhere, there’s plenty of Porsche’s Race-Tex material, a grippy suede-type fabric, and some tasteful (and, at $4k, expensive) matte carbon fiber trim. The latest PCM 6.0 infotainment system – with Apple CarPlay and Android Auto – is standard, too, with exceptionally crisp and fast graphics. As for the $1,600 Bose audio system, well, the sports exhaust tends to dominate. 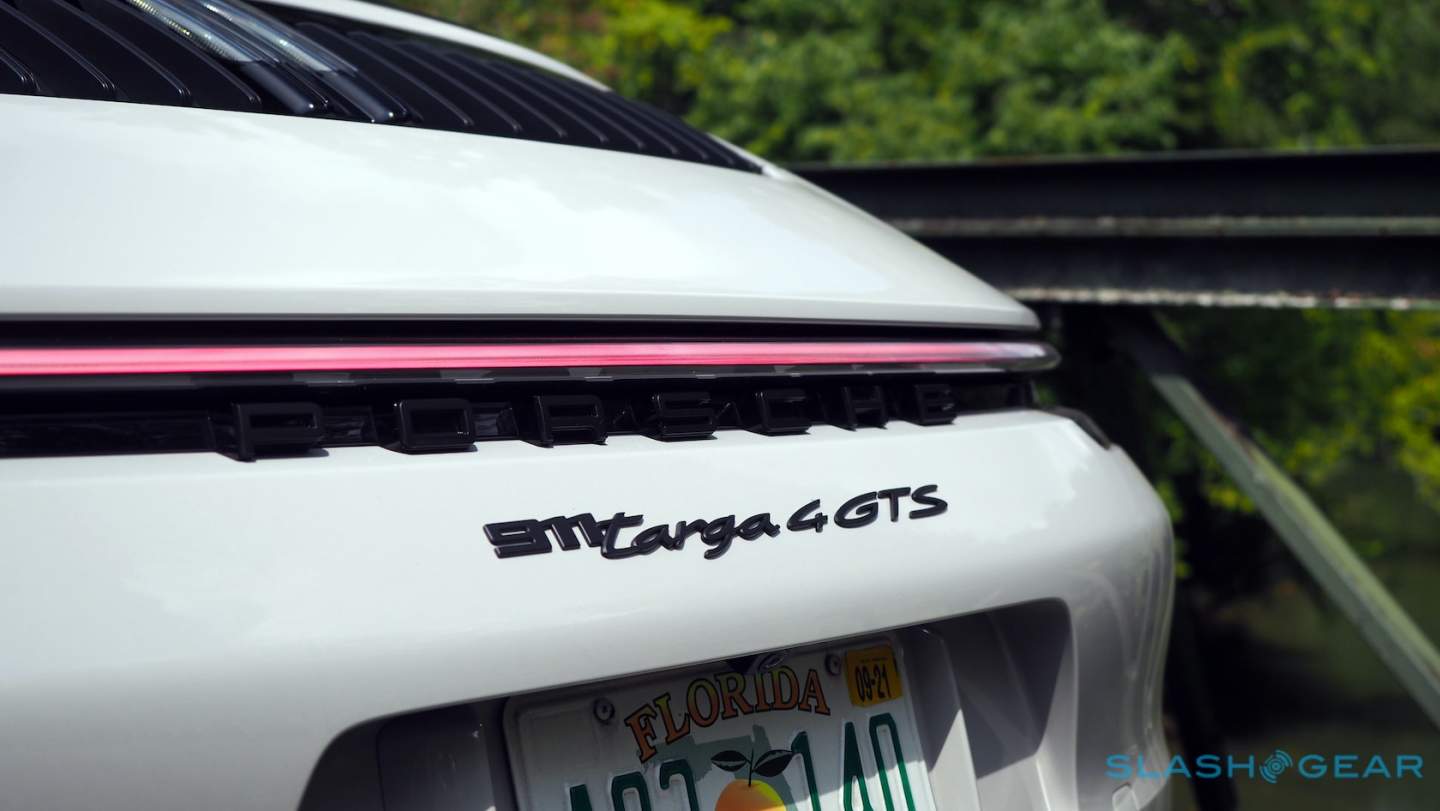 That’s a reminder to choose your options wisely. With Porsche Dynamic Chassis Control, rear axle steering, ceramic composite brakes, fancier headlamps, lane-keep assistance, and various other niceties, this $137k 911 Carrera GTS rose to $178,440 including destination. With its similar heaping of extras, the Targa was even higher: $193,960 all-in.

Seldom does one badge span such a range of experiences. The 2022 911 Carrera GTS coupe is every bit the driver’s car that Porsche promises it will be. A reminder that there’s such a thing as a sweet spot before you get to “too much” power, and a convincing argument that manual transmissions can absolutely be better than high-tech automatics, even if they’re not necessarily faster. 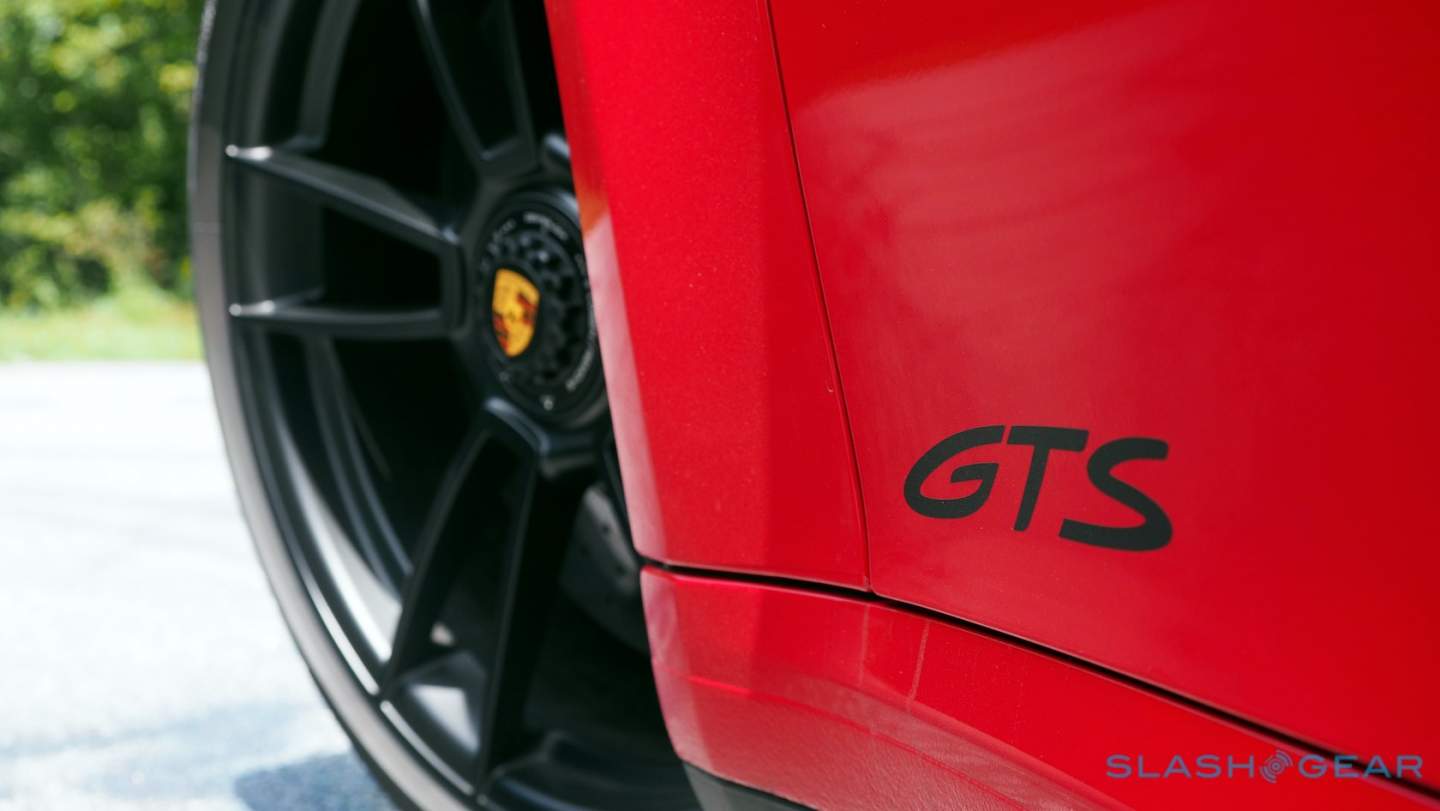 My concern – or maybe, more accurately, my sadness – comes down to the fact that most drivers’ experience of the new GTS will be in Targa form. It is a perfectly lovely car, and as Porsche points out it’s just as much at home on country roads as it is in commuting or taking you to your ski chalet. All of this is true, but it also feels like it’s missing the GTS point.

Nobody ever doubted the 911 could be one car for all seasons. If you’re not going for the GTS, I’d happily point you in the direction of the Targa. In this case, though, a little focus delivers a huge amount more engagement, and the purist would be wise to listen to their first inclinations.