Mazda has confirmed pricing and range for its 2022 MX-30 EV, and there’s every sign that the shapely electric crossover could be a tough sell given the amount of driving it’s capable of. The automaker confirmed back in April that the MX-30 BEV would be coming to the US, though we’ll have to wait longer for Mazda’s unusual take on the range extender system.

That will combine battery-electric drive with a rotary engine, as Mazda last used in the RX-8. The gas engine won’t be connected mechanically to the wheels, instead acting to charge up the battery and prolong usability between traditional recharges. 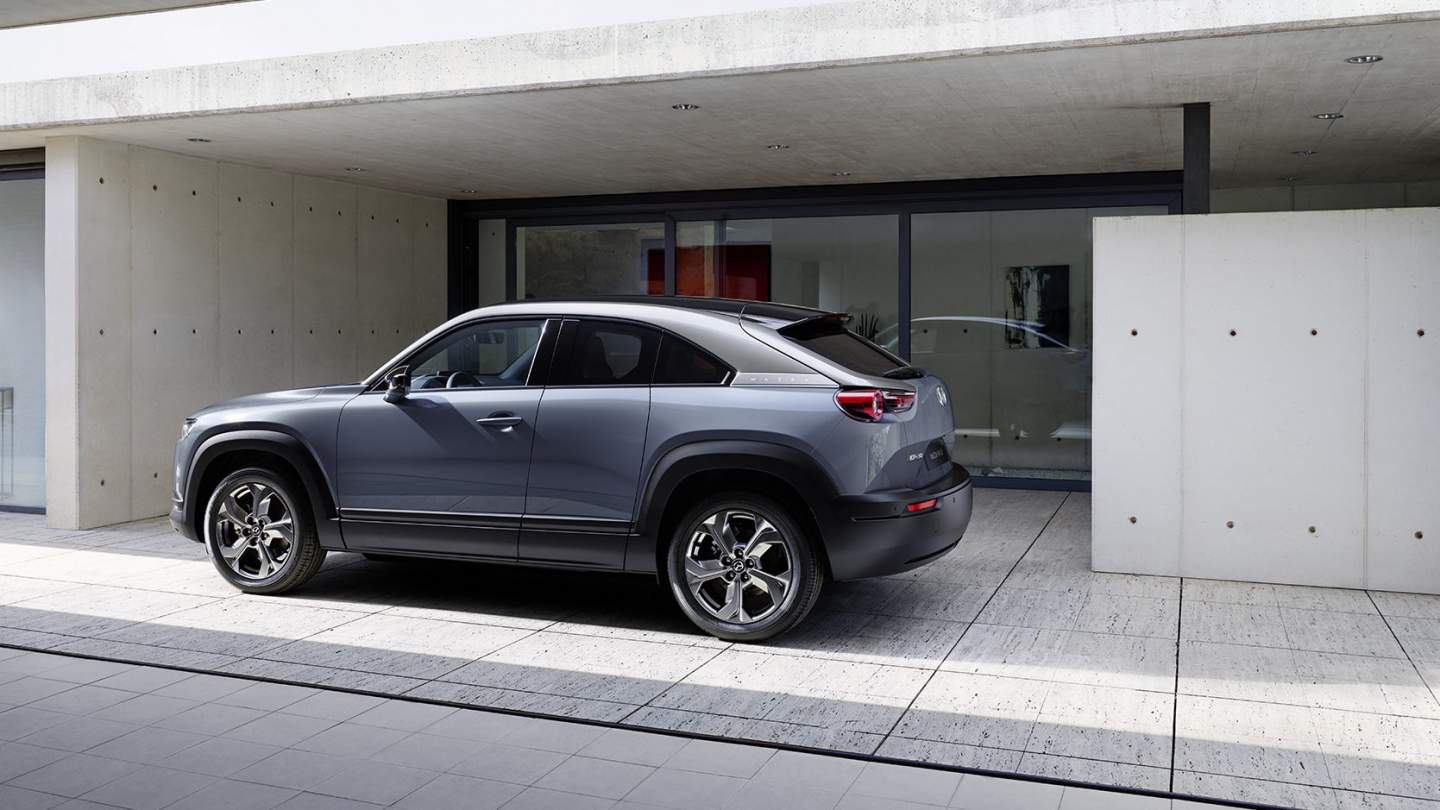 Just how often those recharges are required, though, is likely to be the MX-30’s big problem. Mazda wouldn’t confirm US range in April, though we guesstimated it would be around 100 miles under EPA conditions given the 124 miles the crossover is rated for in Europe. Today, Mazda confirmed it is indeed expecting around 100 miles from a full charge of the 35.5 kWh lithium-ion battery.

That, the automaker insists, is ideal for “the needs of most urban residents.” Certainly, the average driving Americans do each day would be covered by a 100 mile battery, but it’s hard to see the MX-30 EV as especially competitive given the price. 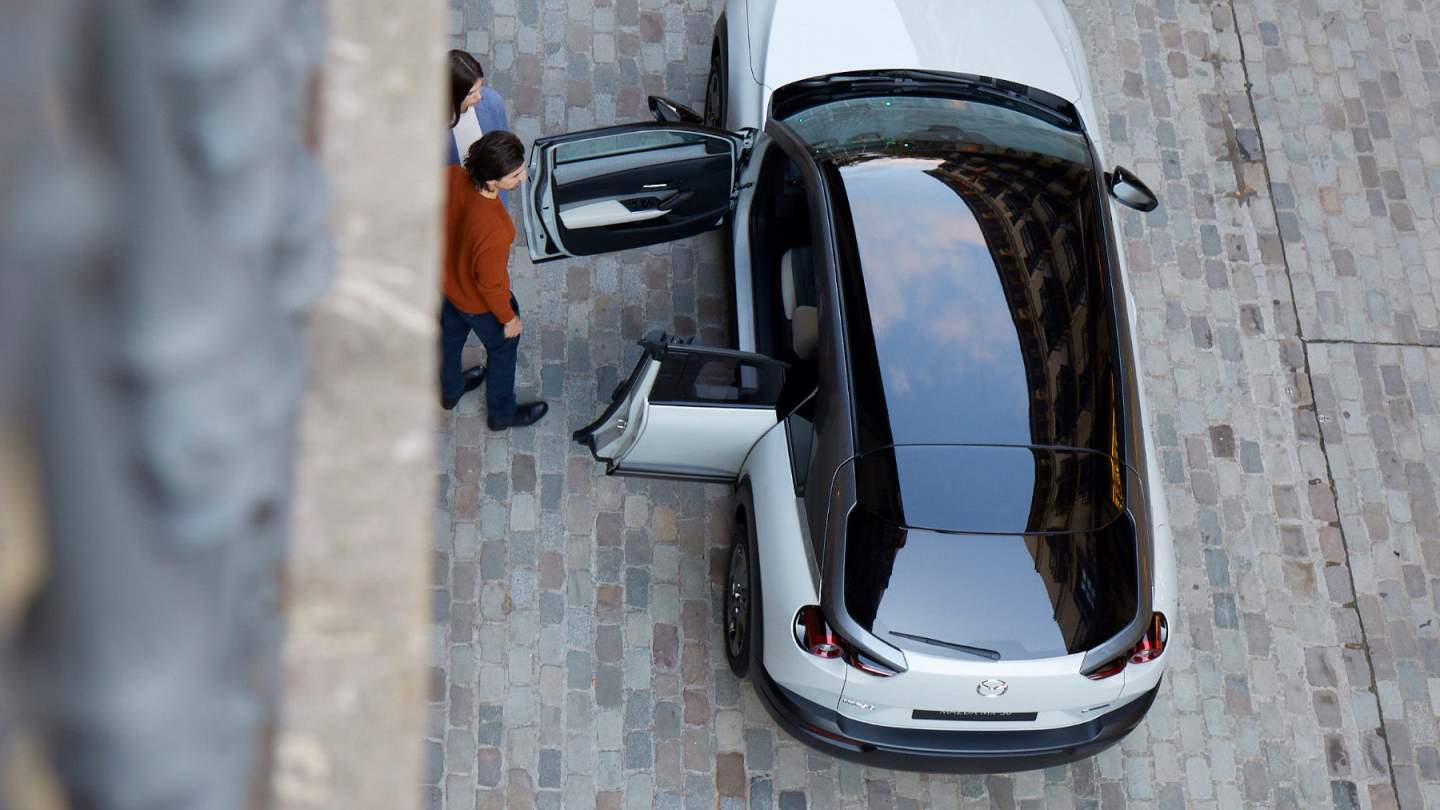 What Mazda may offer that rivals fall short of, though, is a rewarding driving experience. While we’ve yet to get behind the wheel of the MX-30, the 143 hp front electric motor with 200 lb-ft of torque – combined with the automaker’s know-how in chassis setup – could make it more entertaining than most EVs. Paddles to control regenerative braking levels are standard, as is a new electric G-Vectoring Control Plus (e-GVC Plus) system to shift torque to the most effective wheel. 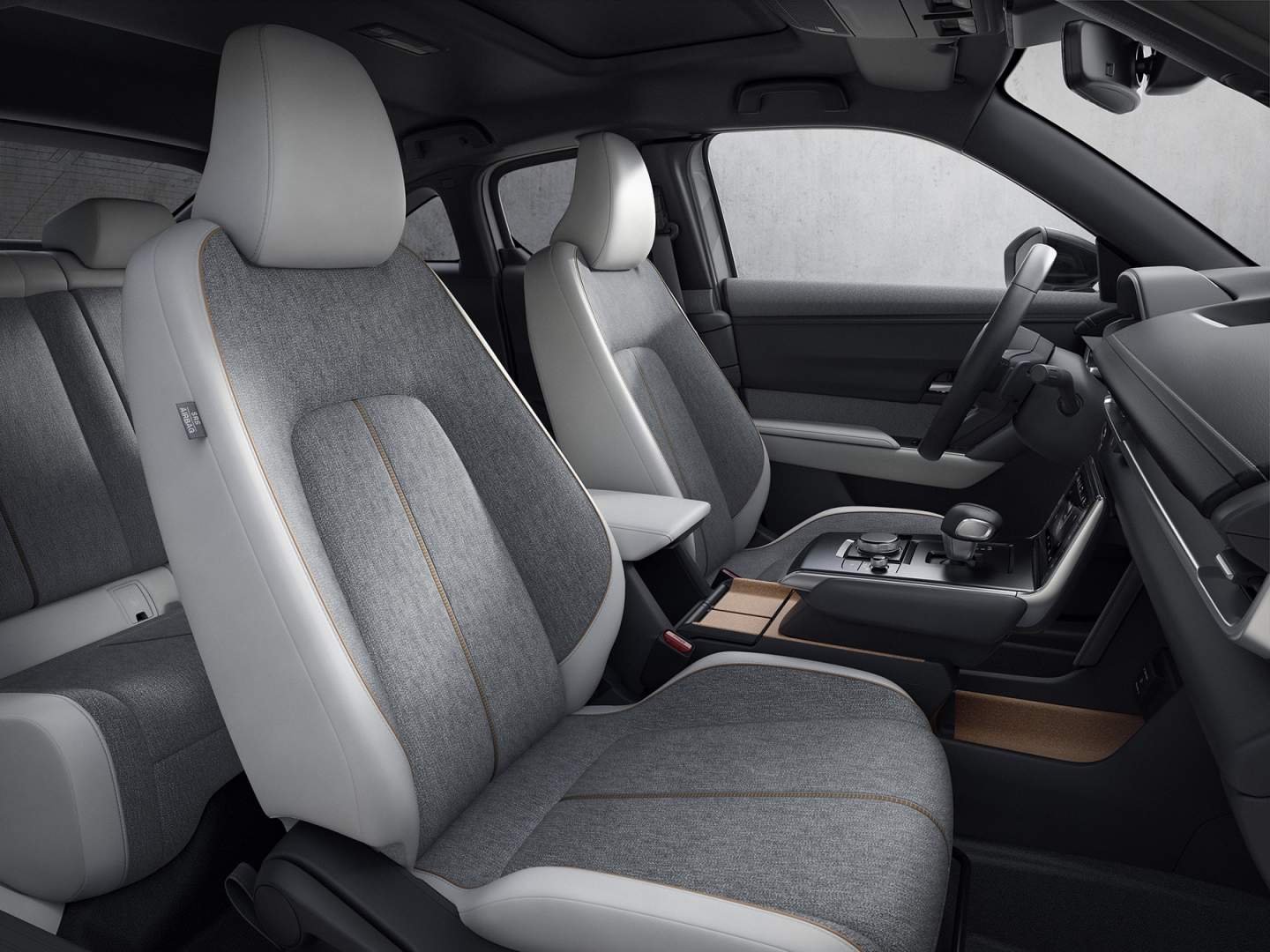 The “freestyle doors” – which, as on the old RX-8, see the rear doors hinge backward – are distinctive, too, and the cabin uses materials like cork, recycled fabric, and recycled plastic bottles to up the green credentials. An 8.8-inch touchscreen with Android Auto and Apple CarPlay, adaptive cruise control, blind spot warnings with rear cross-traffic alerts, lane keep assistance, front and rear braking assistance, and a power moonroof are standard, as are 18-inch wheels and rear parking sensors.

The MX-30 Premium Plus throws in Blind Spot Assist with steering assistance, low-speed front cross-traffic alerts, a 12-speaker Bose audio system, 360-degree camera, and heated steering wheel. Both trims support up to 50kW DC fast charging, and Mazda will throw in $500 of ChargePoint credit with each car.

Perhaps recognizing that the MX-30’s range will be an uphill battle to sell, Mazda is playing it relatively cautiously with the new EV. For a start, it’ll only be available in California initially, when it launches this fall. It’ll also come with access to what the automaker is calling the Elite Access Loaner Program: basically giving 10 days per year of access to another Mazda vehicle for the first three years of ownership. That way, you could borrow a larger CX-9 three-row SUV, for instance, for longer road-trips.