BMW has priced up its new, all-electric SUV, with the 2022 BMW iX xDrive50 set to arrive in the US come Q1 of next year. The dual-motor SUV EV will have all-wheel drive as standard and 516 horsepower on tap, BMW says.

It’ll be capable of 0-62 mph in 4.6 seconds as a result. For those who think that’s just not enough, there’ll be an even more powerful version: the BMW iX M60 will have more than 600 horsepower, the automaker promises, though there’s no specific release date for its debut. 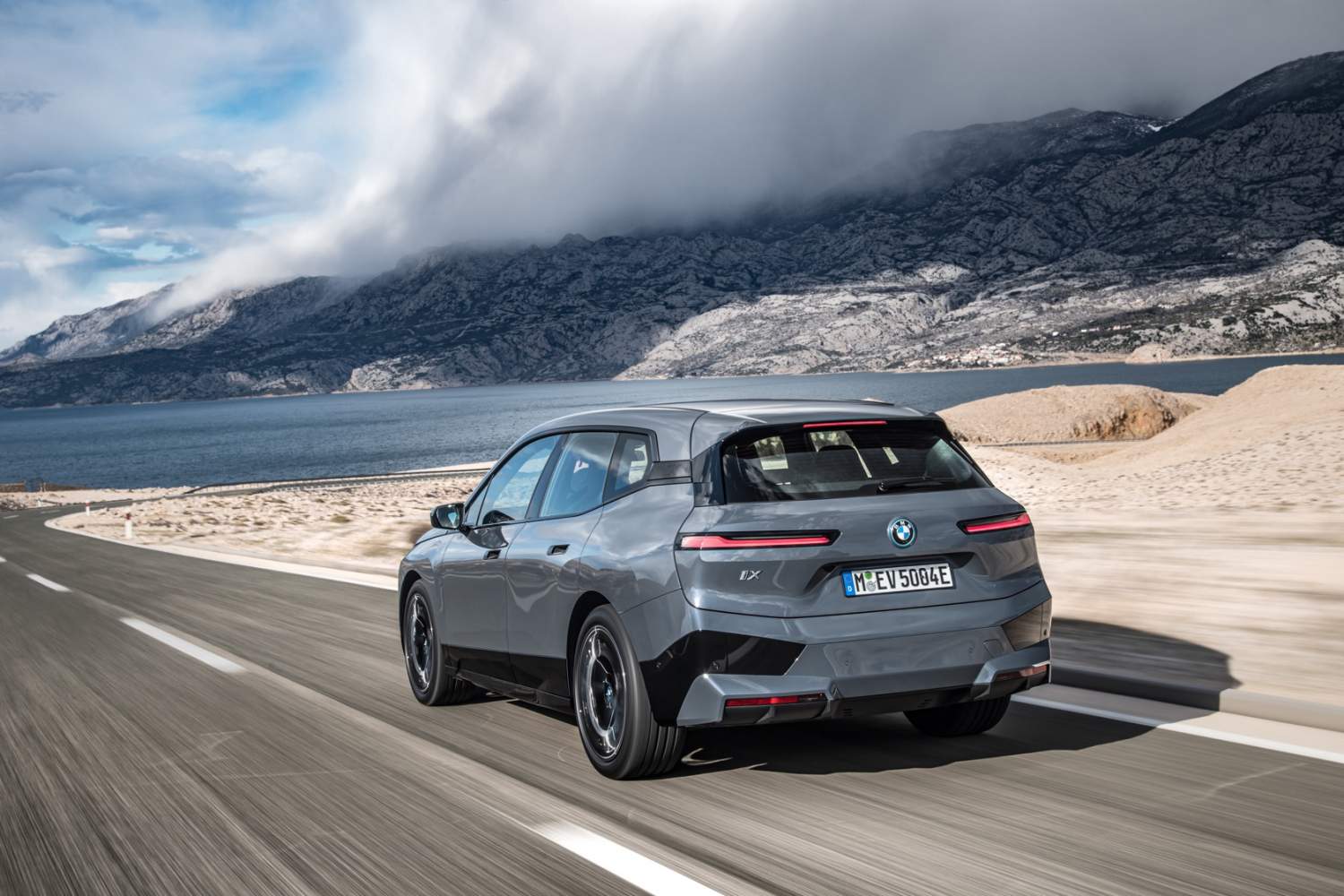 For the iX xDrive50, BMW is expecting around 300 miles of range on a full charge, based on the EPA test cycle. Top speed will be 124 mph.

For charging, there’ll be an 11 kW onboard charger for use with Level 2 systems at home. With that, BMW says, you’re looking at 0-100 percent of a charge in under 11 hours. 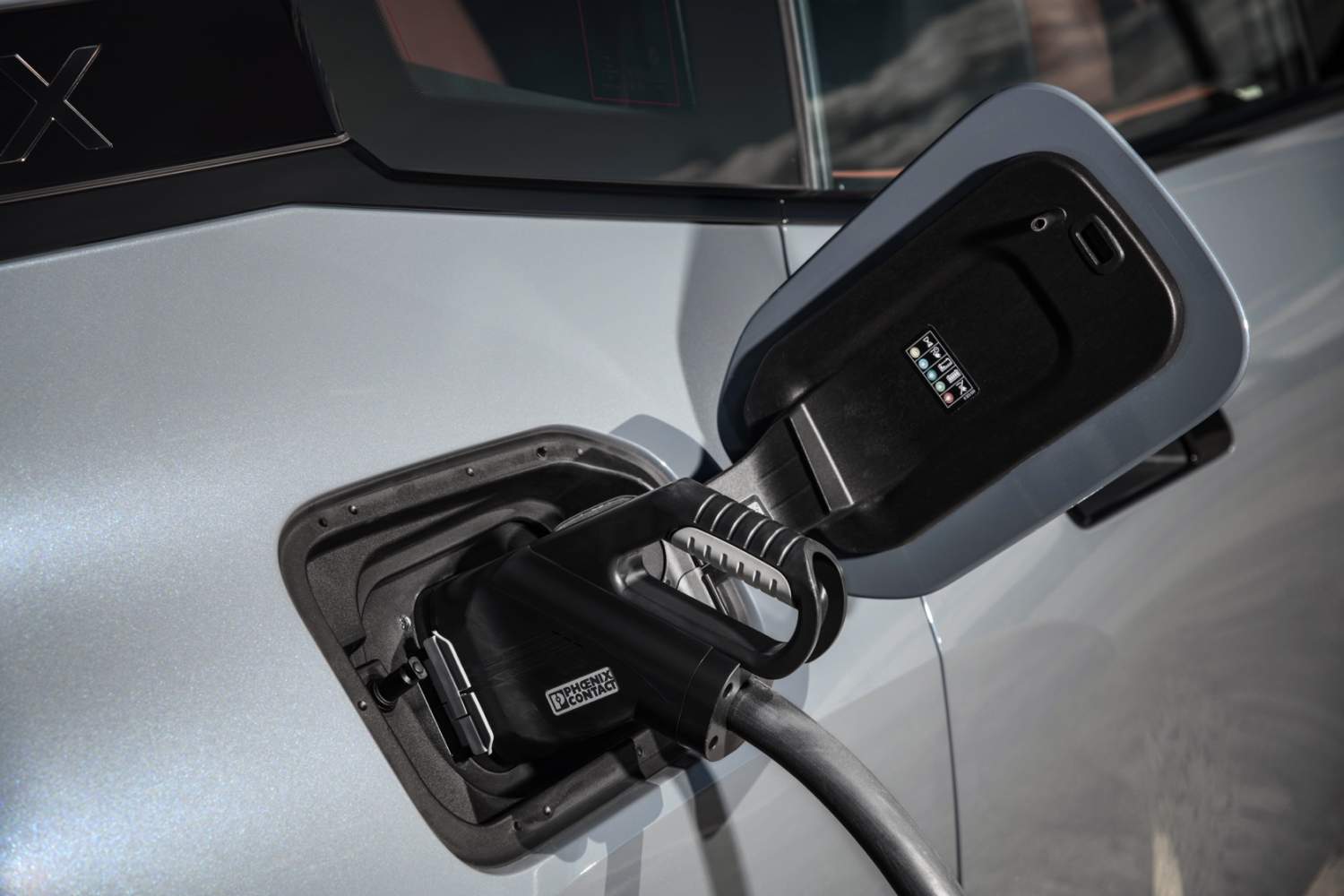 On the move, meanwhile, there’s up to 200 kW DC fast charging support. Going from 10-percent to 80-percent would take under 40 minutes, BMW says. In ten minutes, you’re looking at up to 90 miles of range being added. BMW is partnering with charging network EVgo, with buyers of the iX xDrive50 getting $100 in credit to use, and access to things like real-time charger status and session control from the SUV’s companion app.

Outside, it’s a familiar SUV shape, though with some specific EV detailing. It’s 195-inches long, 77.4-inches wide, and 66.7-inches high, so roughly as long and wide as an X5. However it’s about the same height as a BMW X6. The BMW kidney grille has been blanked off, hiding sensors like cameras and radar rather than being required for cooling. 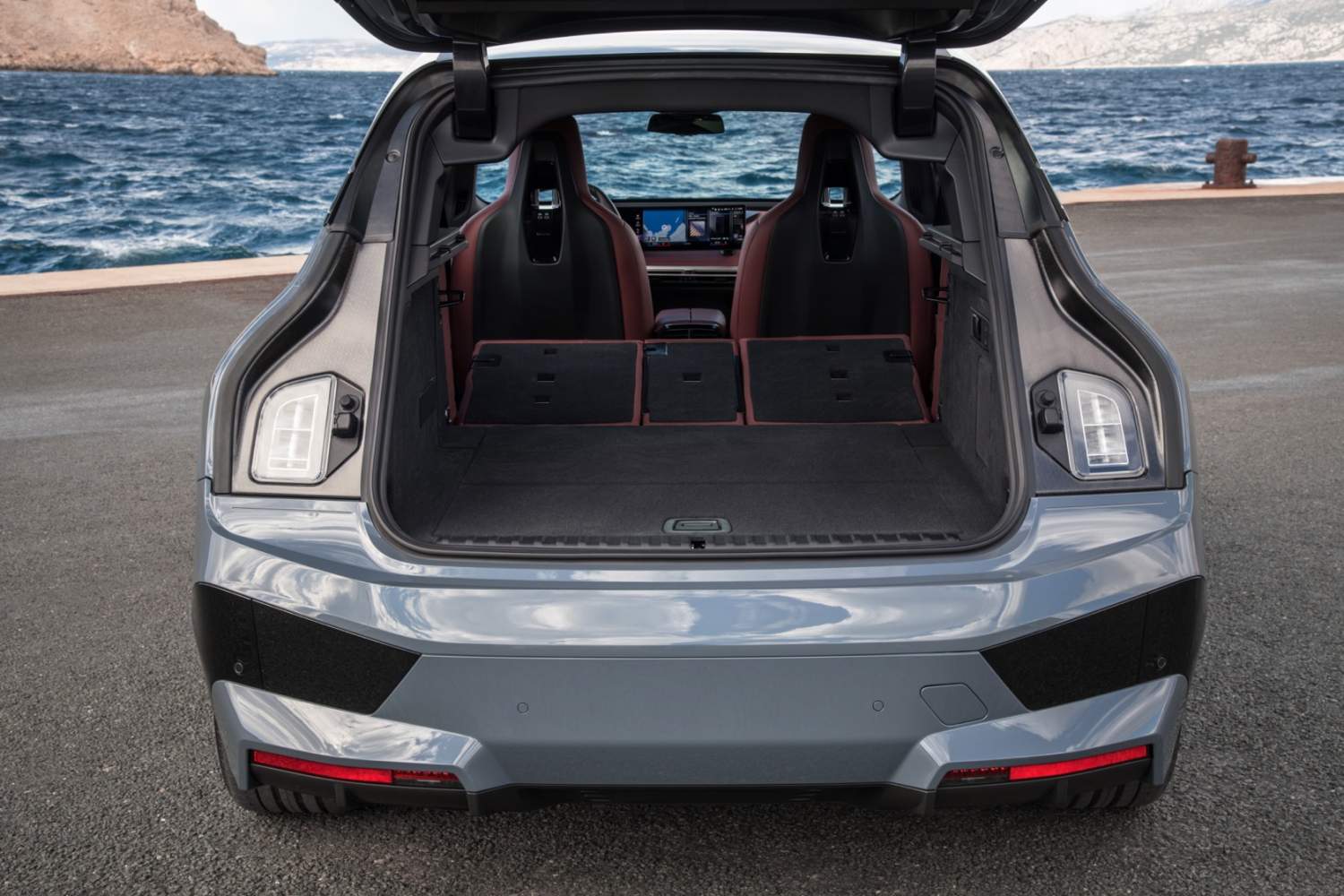 It’s flanked by what BMW says are the thinnest headlights it has ever used on a production model. They’re full-LED as standard, with the daytime running lights getting a new style and acting as the turn indicators. Rather than the hood opening – since there’s nothing under there that can be maintained by the driver – the BMW badge opens and serves as the washer fluid opening.

At the back, there are more slimline LEDs. BMW has also fared in the door handles, and the windows are frameless too. BMW is using the Digital Key system – i.e. your smartphone – to handle proximity locking and unlocking. 20-inch wheels are standard. 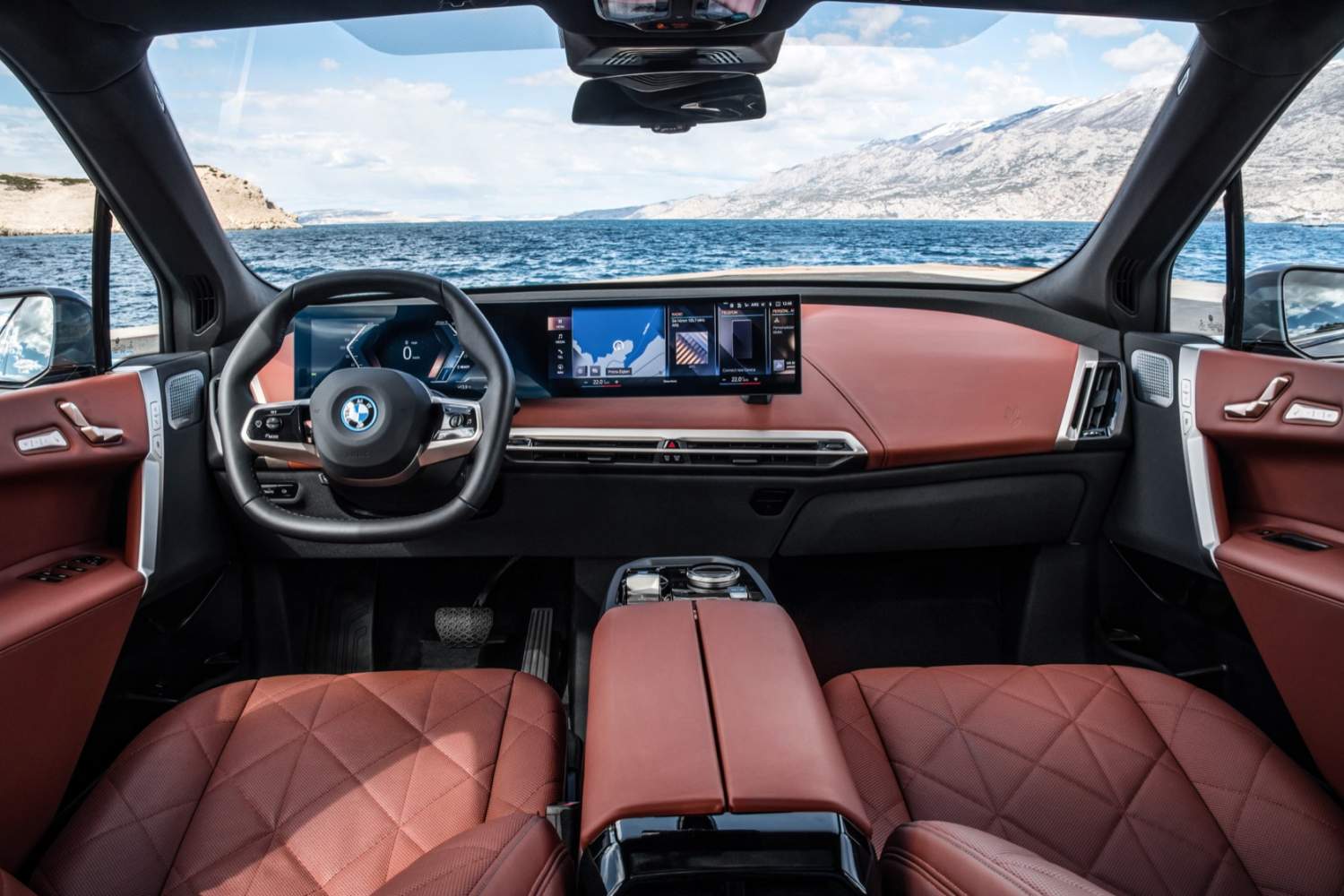 Inside, there’s a more minimalistic dashboard with BMW claiming about half the switches and buttons as you’d find in the automaker’s regular SUVs. There’s a standard panoramic glass roof with electrochromatic shading, and options like a Bowers & Wilkins Diamond Surround Sound System and a head-up display. 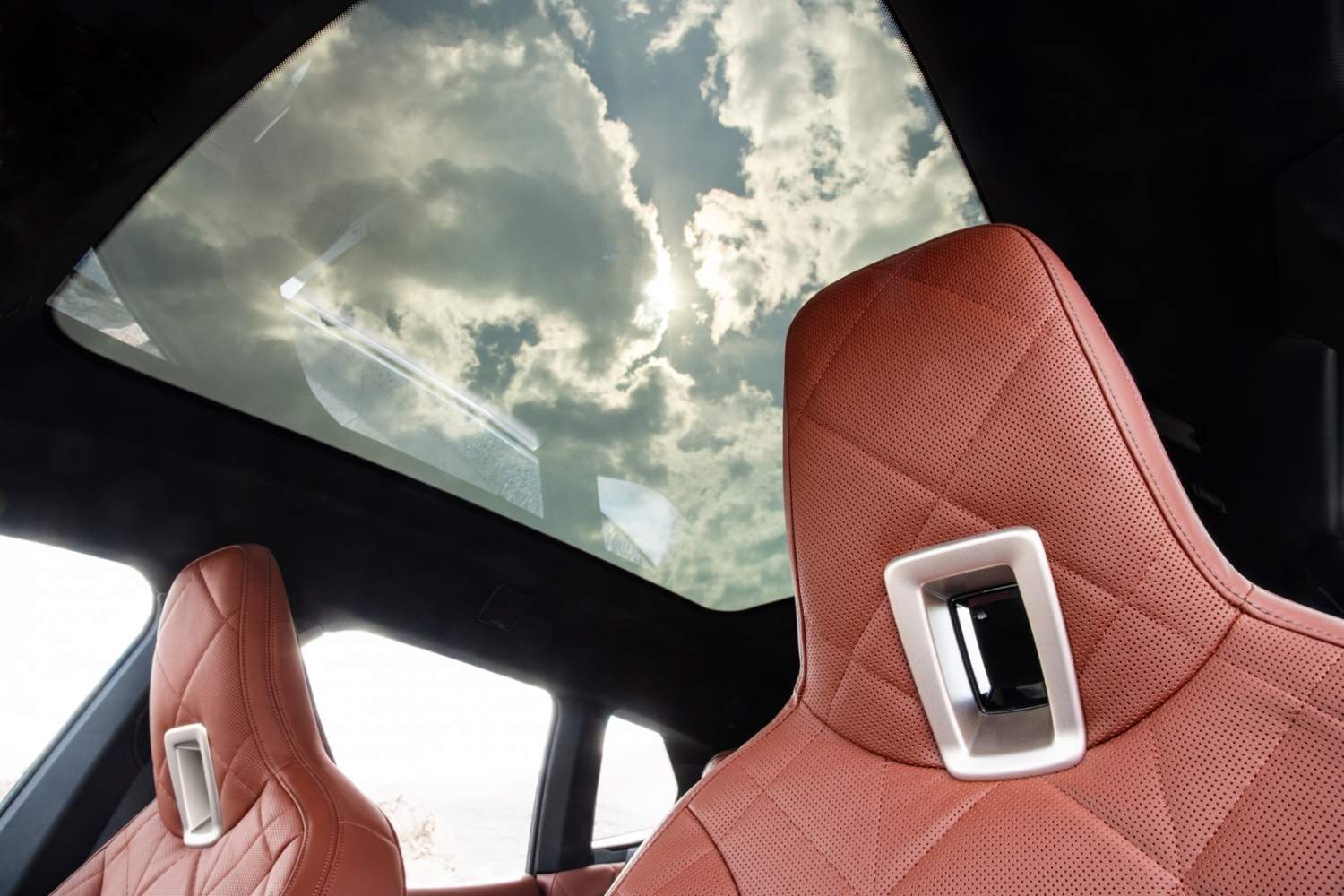 There’s both leather, non-leather, and microfiber/wool blend seating options, with optional seat heating, ventilation, and massage. The infotainment system, meanwhile, uses BMW iDrive 8 on a curved anti-reflective glass display: 12.3-inches for the driver’s gauges, and 14.9-inches for multimedia, navigation, and other controls.

Pricing for the 2022 BMW iX xDrive50 will kick off at $83,200, the automaker says, plus $995 destination. That’s before any federal incentives or other credits.