The Volkswagen ID.4 electric crossover is coming to America, and VW is hoping to replicate some of the reservation successes rivals like Tesla have seen in recent years. The first taste for North American drivers of the automaker’s new MEB all-electric car platform – having missed out on the ID.3 hatchback – the 2021 ID.4 will also mark the US debut of a brand new online ordering system.

“Tesla has been successful for many reasons, and we believe one of them is that nice, straightforward online buying process,” Duncan Movassaghi, Executive Vice President of Sales & Marketing at VW, explains. “Now, we can’t replicate that in its entirety, and neither would we want to. We want to see our dealerships as an advantage.” 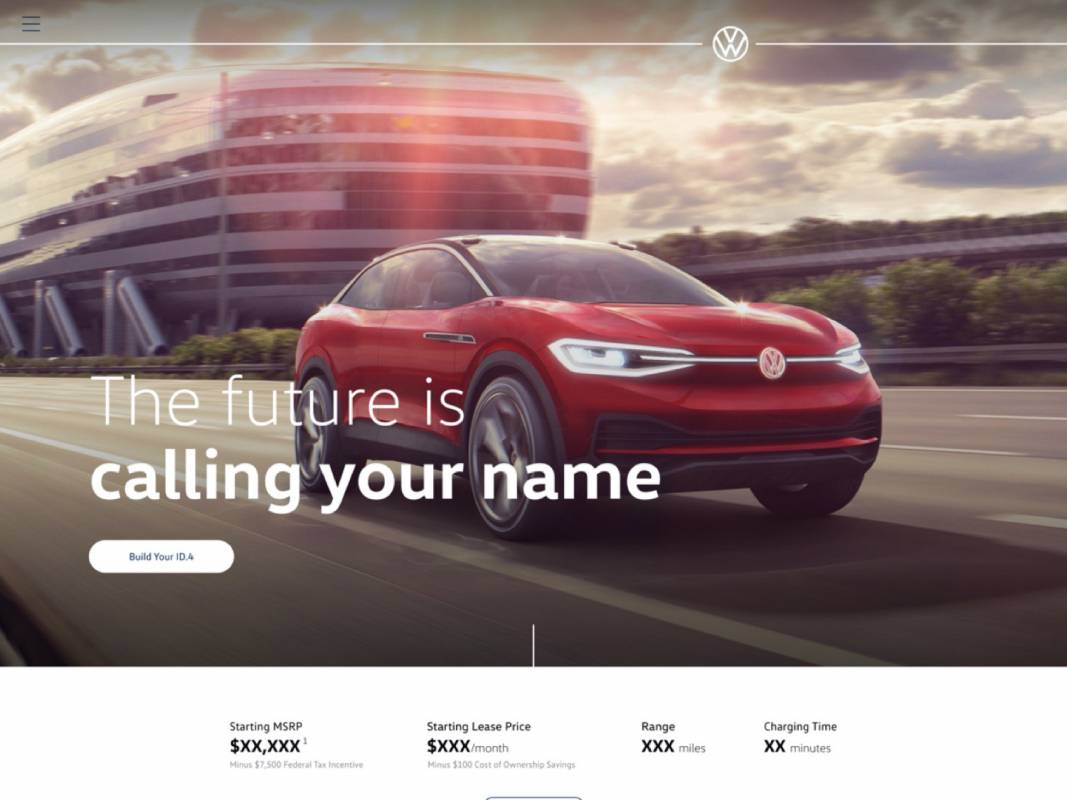 The result is a hybrid model, similar to what we saw Audi use for the launch of the 2019 e-tron SUV. On the one hand, when it goes live next month the ID.4 site will act as a research tool, as you’d expect, setting out the basics like price, range, and trim levels, and also explaining why drivers might want an electric car and what living with an EV can be like. That’s “how far, how fast, and how much,” as the automaker puts it.

It’s worth mentioning that these are screenshots of a non-final version of the site, with either filler text or details still to be added. Because of that, don’t read too much into things like ID.4 specs and packages at this stage. 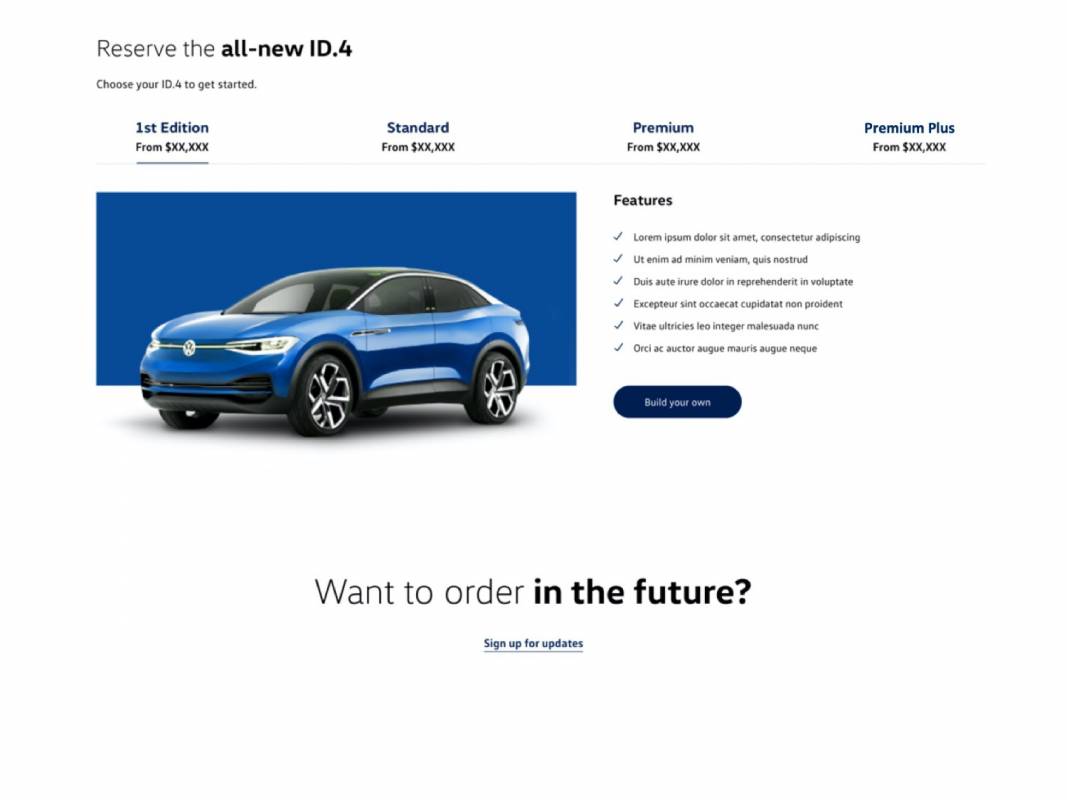 Beyond mere EV education, though, there’ll be the ability to stake a place in line with a $100 refundable deposit. Go down that route, and you’ll have access to the configurator to choose a trim and other ID.4 options. VW is planning on a fairly minimalistic set of choices on that front – we’re guessing at an “ID.4 First Edition” which will probably arrive first, and then a build-your-own version with different trim levels and a handful of extras to pick from – to keep the structure simple. 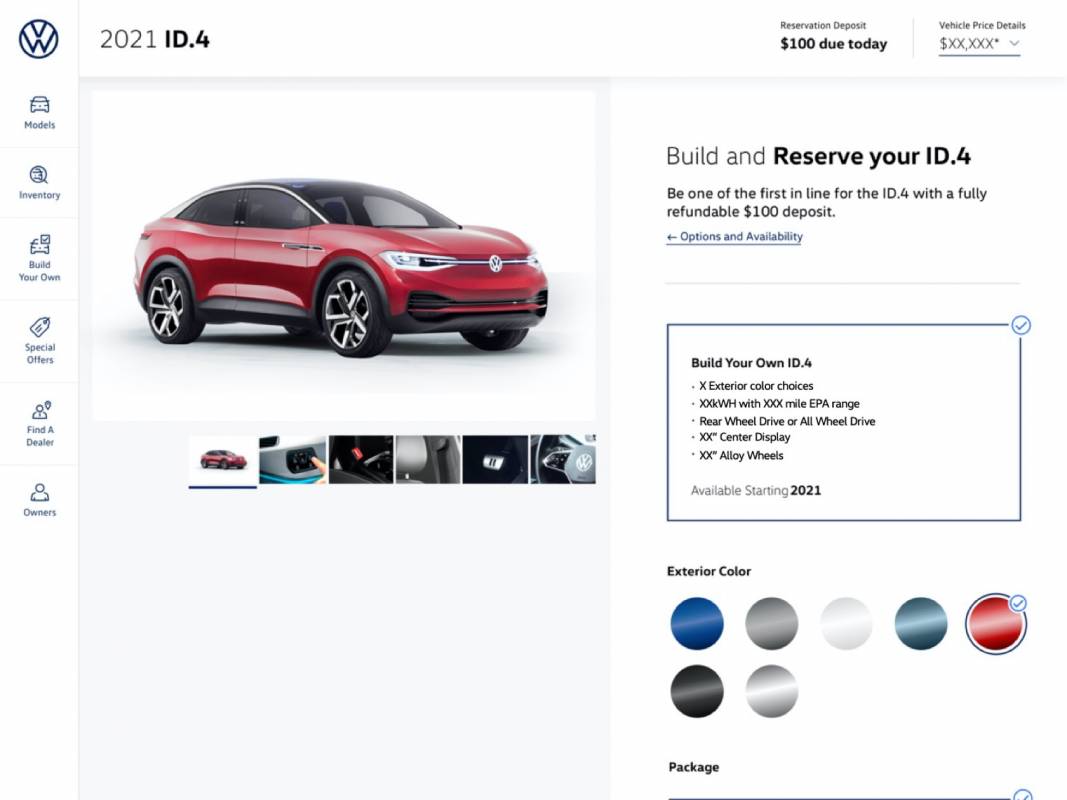 It’s a strategy that we’ve seen work to great effect with previous Tesla launches. Hundreds of thousands of Model 3, Model Y, and most recently Cybertruck placeholders have not only helped buoy the California automaker’s stock price, but given it a healthy war chest of reservation fees as it ramps up production. When the EVs start rolling off the line, it’s to an existing audience of eagerly-awaiting would-be owners.

The difference between Volkswagen and Tesla, though, is the involvement of dealerships. Indeed you could go to your local VW dealer and go through the exact same online reservations process there instead. The end result, Movassaghi says, will be the same, and could well allow VW to cater both to those who – whether for reasons of social distancing or self-sufficiency – prefer to make those configuration decisions remotely on their own, and those who want a dealership specialist on-hand to answer questions. 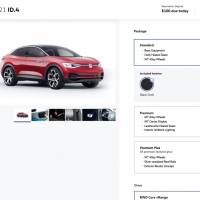 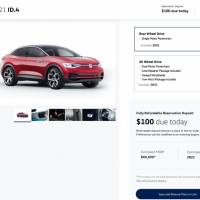 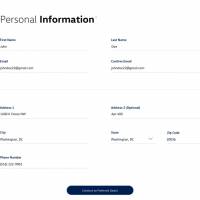 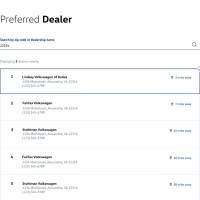 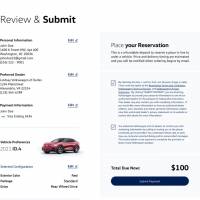 That process could make it more confusing, though, especially when it comes to the final price. When you order a Tesla online, you know pretty much exactly what you’re going to end up paying for it. VW, however, is constrained by the more traditional dealership franchise model, and that threatens to make the whole process a little murkier.

Because of the laws around those franchise arrangements, VW can’t mandate final pricing among its dealers. All it can do is set the – still to be confirmed – recommended list price for the ID.4. As we’ve seen with many high-profile vehicle launches, that leaves plenty of room for dealerships to take full advantage of demand exceeding supply, and capitalize by adding a premium on top. 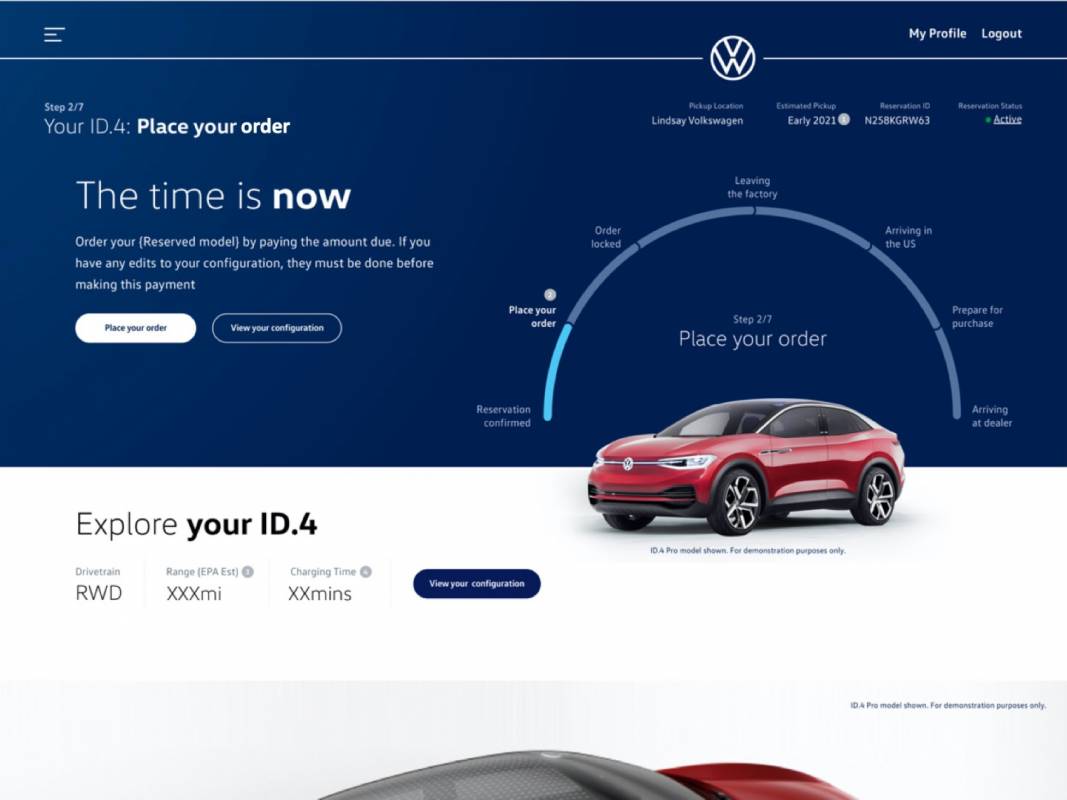 Despite Volkswagen’s fancy reservations system, and the deposit that reservation-holders will be putting down, the reality is that they’re still entering an agreement to buy from their dealer. The final purchase price, therefore, will be decided by that dealer, and there’s nothing to say that the number listed on VW’s site is going to be the one that ends up on the final paperwork.

“We’re effectively getting a hot lead,” VW’s Movassaghi explains, with the online reservation process including picking your local dealer of choice. The information put into the site gets passed on to the dealer and, when the order is “locked” later on in the purchase process, both the $100 initial deposit and $400 locking deposit go toward the final price of the car. However they’re fully refundable until the paperwork is signed at the handover – and so, too, could the final pricing theoretically change up until that point.

It’s a reminder that, while the ongoing pandemic may have driven demand for online car retail, the dealership model is still a wildcard in that process. According to VW, 99-percent of dealers in the US are already onboard with the reservations system being set up for the 2021 ID.4. The automaker says it’s working on getting the final hold-outs involved too. 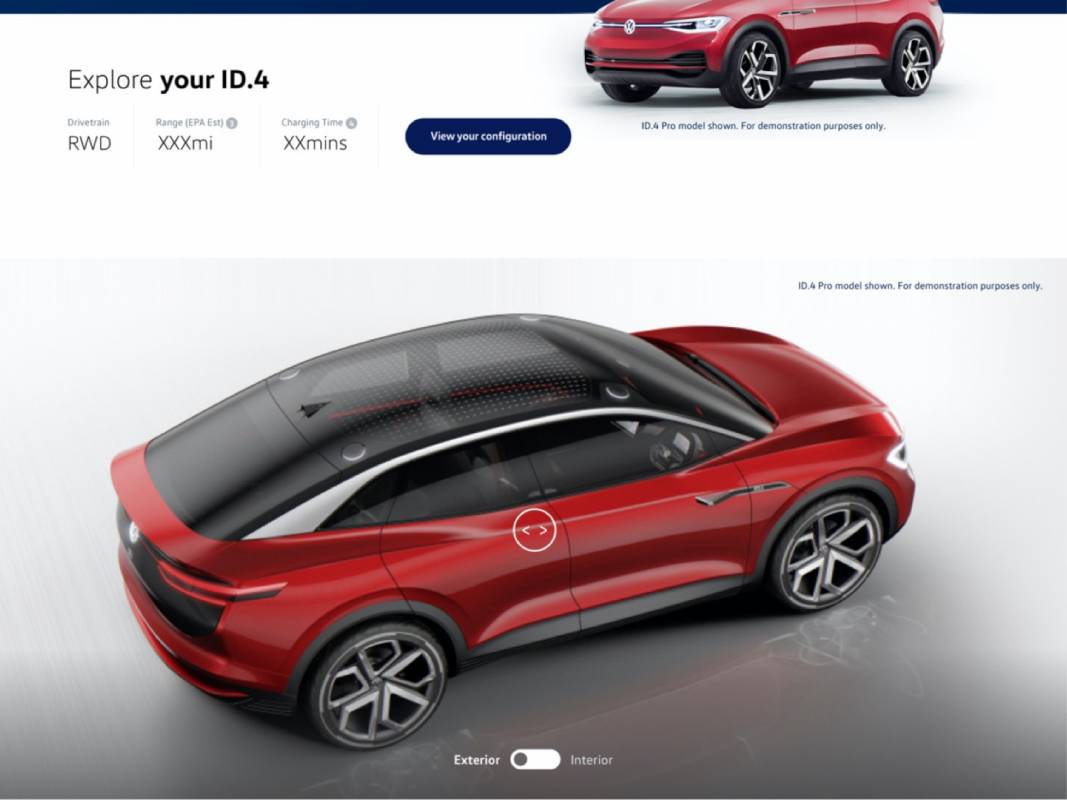 Similarly, VW is also working on making sure its systems don’t go down when push comes to shove. That means being prepared for a “best-case” scenario where demand is sky-high, the company says, so that it doesn’t run into a similar problem as the ID.3 reservations system encountered in Europe last year – or, indeed, as Ford fell foul of when it opened Bronco reservations recently.

Just how many of those reservations are placed, and where they are across the US, will help VW figure out allocations of the first EVs to arrive from Germany before the end of 2020. Reservation-holders will get a handy progress chart showing just where their car is in that process, though VW says it’s also planning to earmark some to prioritize the so-called ZEV states, and another handful to make sure dealers have demonstrators on hand for test-drives. 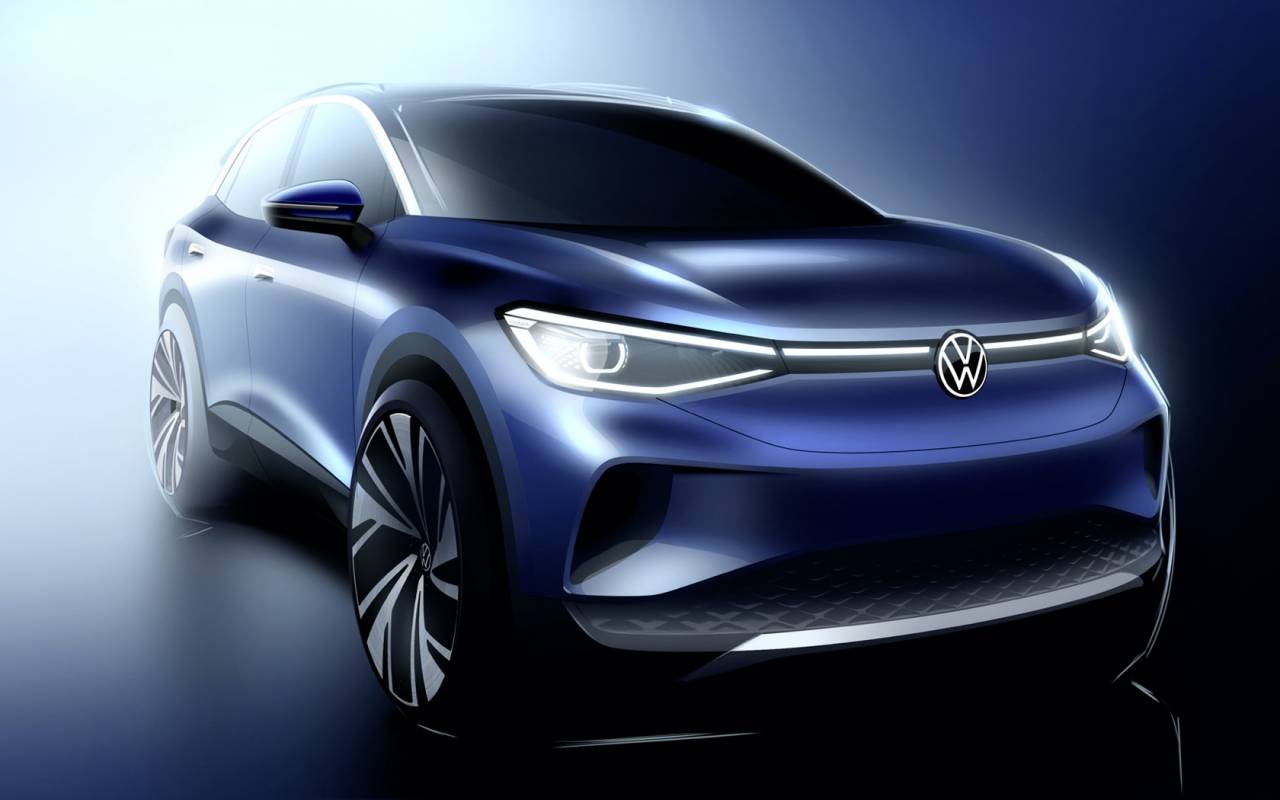 For Volkswagen, a lot of this falls under the heading of “testing the waters” as it readies the ID.4’s US arrival. Although the reception for the smaller ID.3 was positive in Europe, there’s no denying that America can be a very different market. Opting to debut MEB with a crossover is a sensible strategy, given the tastes of drivers here, but the ID.4’s success will largely come down to price and range: when it comes to those details, we’ll have to wait until next month.