The 2021 Mitsubishi Outlander PHEV is the plug-in hybrid SUV people keep forgetting about. After a week behind the wheel, though, it turns out to be oddly memorable – though not necessarily for all the reasons Mitsubishi might hope for. Aggressive pricing and a loaded spec sheet butt up against some questionable hardware and design decisions, leaving this one of the more idiosyncratic hybrids out there. 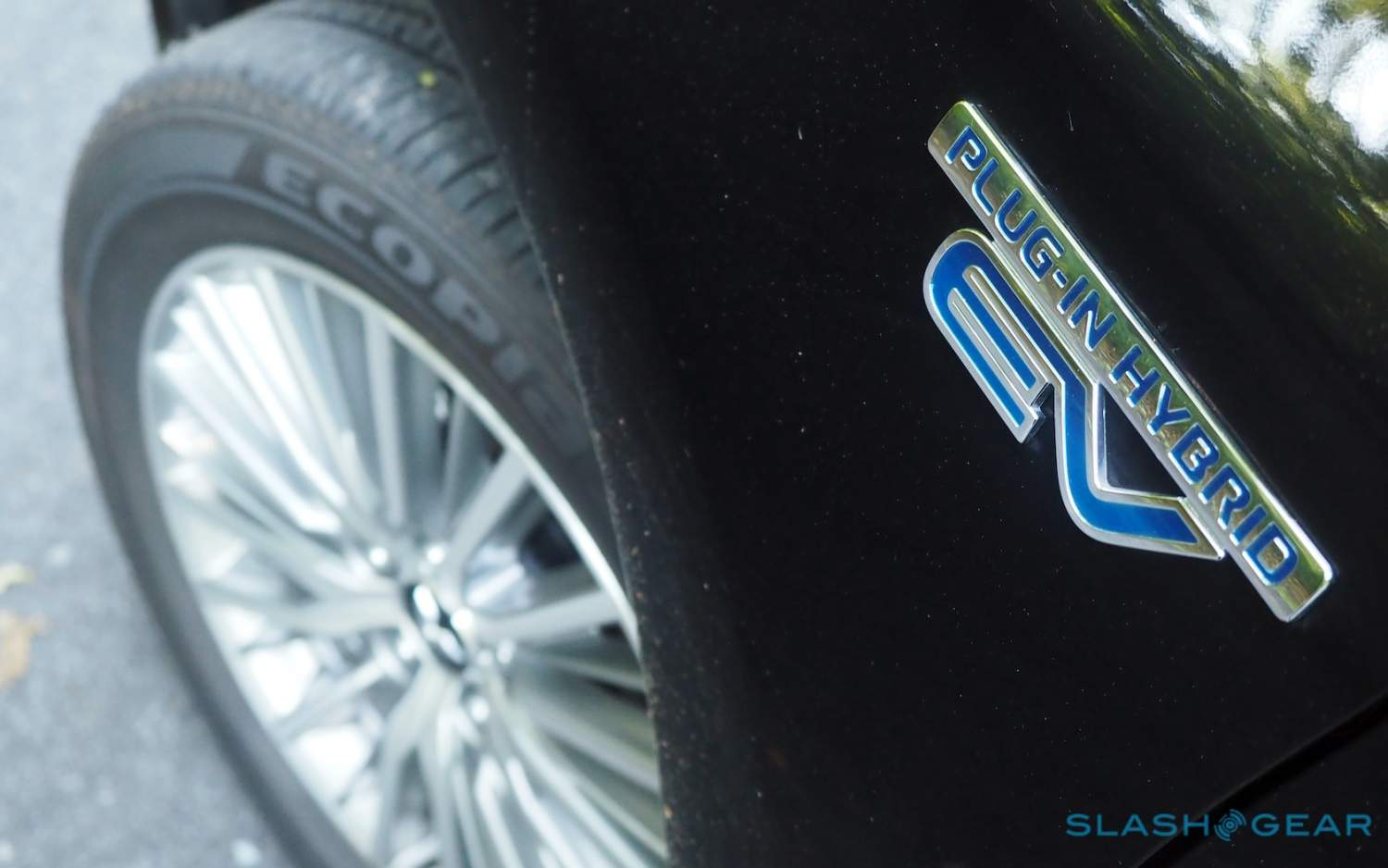 Mitsubishi doesn’t stint on standard features, at least. You can cover up the 8-inch infotainment with Android Auto or Apple CarPlay, and there are leather seats with front row heating, dual-zone climate control, multiple USB ports front and rear, and a power tailgate. On the safety side, this entry-level SEL trim gets forward collision mitigation with pedestrian detection, lane departure warnings, and blind-spot warnings with lane change assist and rear cross-traffic alert. Adaptive cruise control is an option. 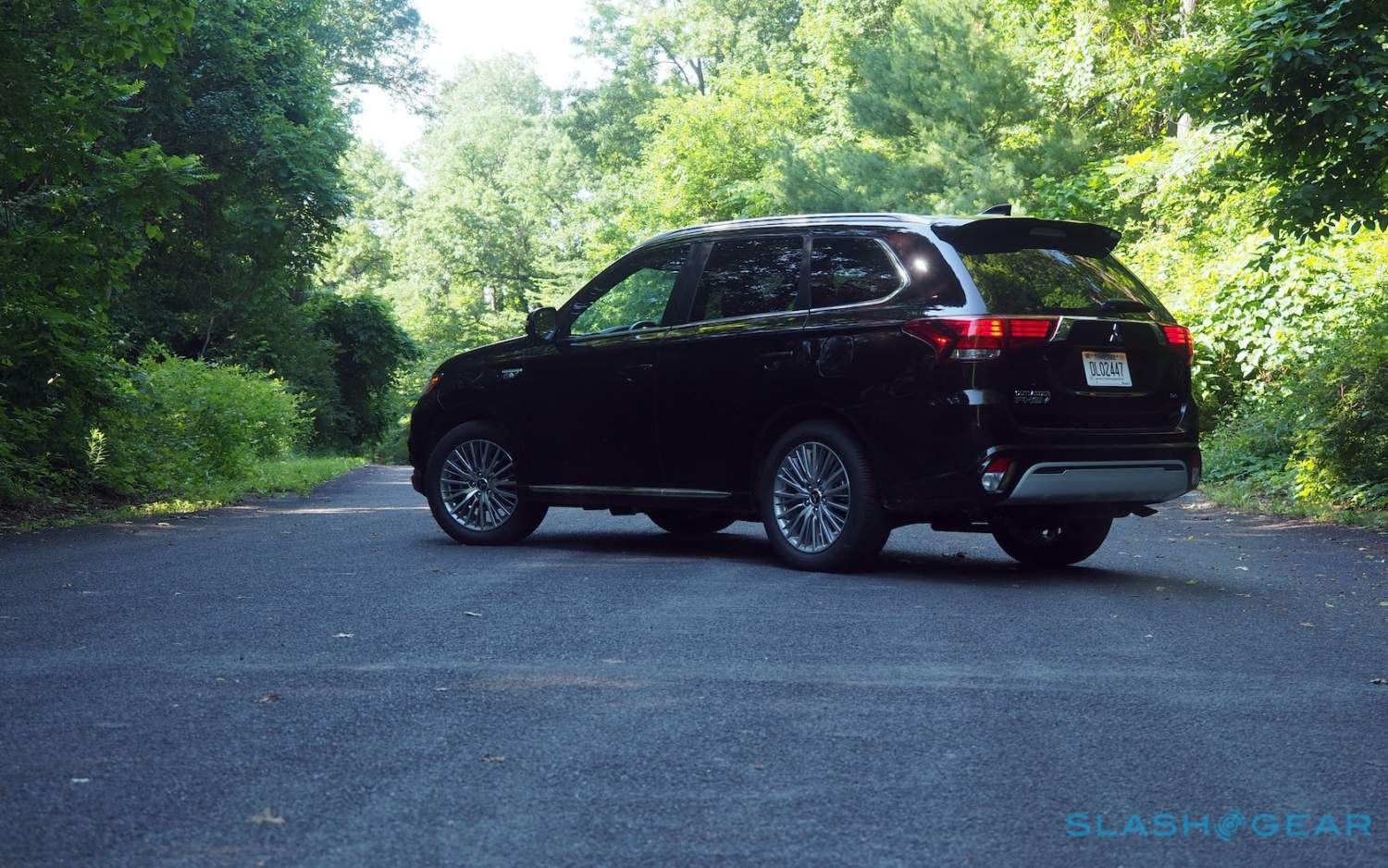 The Outlander PHEV is well-equipped, then, but it doesn’t feel especially cohesive. The cabin design is haphazard, with different types of buttons, creaky plastics, and disjointed color schemes. Some of the design decisions are just odd, like the transmission shifter that resembles a robot’s codpiece, and others are more ugly, like the underwhelming infotainment system. 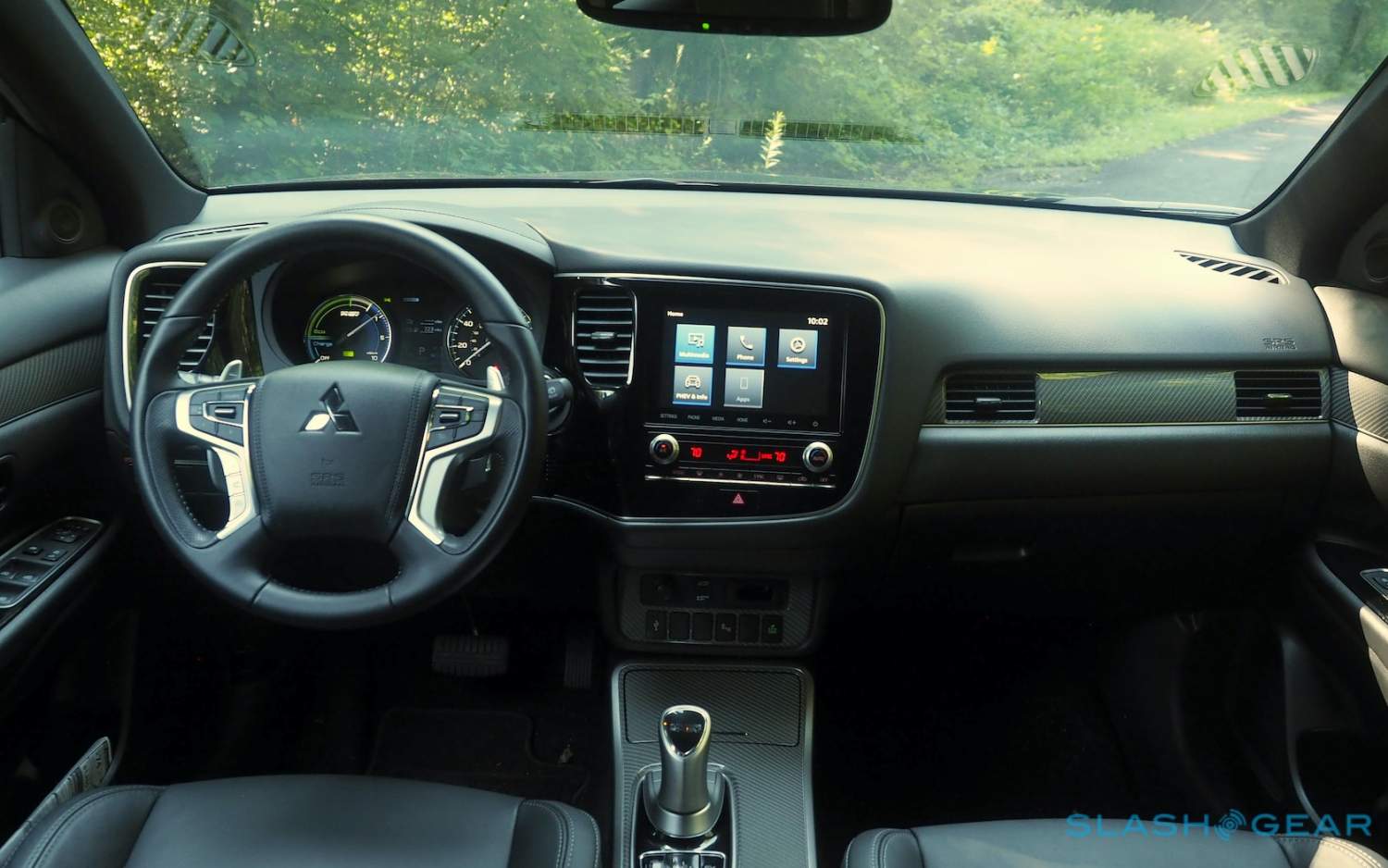 That features drab graphics and bad grammar dialog messages, and it’s not the only head-scratcher. Something about the Mitsubishi Outlander PHEV is like going through Alice’s looking-glass into a parallel universe: the Outlander PHEV has the features you expect, but it delivers them in odd ways. The power tailgate, for example, is actually a regular one but with a powered arm that effectively pulls it down for you, as though it was easier for Mitsubishi to just bolt in a (slow) robot. 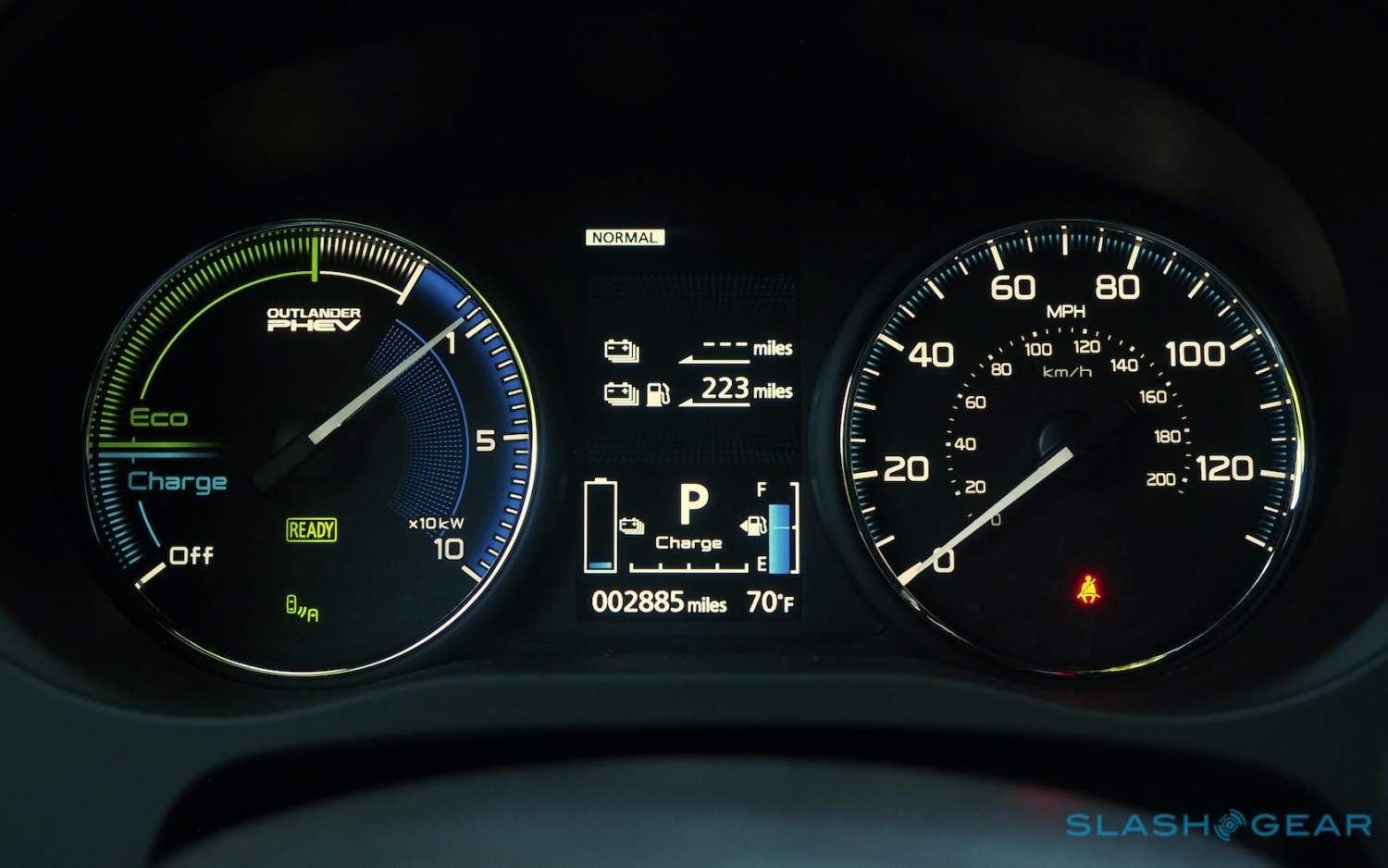 The same goes for the drivetrain, which has its own share of complexities. For the 2021 model year, Mitsubishi swapped in a new 2.4-liter gas engine – replacing the old 2.0-liter, which was actually less efficient than this larger model – and added a slightly bigger battery to go with the twin electric motors. The result is electric all-wheel drive and an EPA electric range of 24 miles. 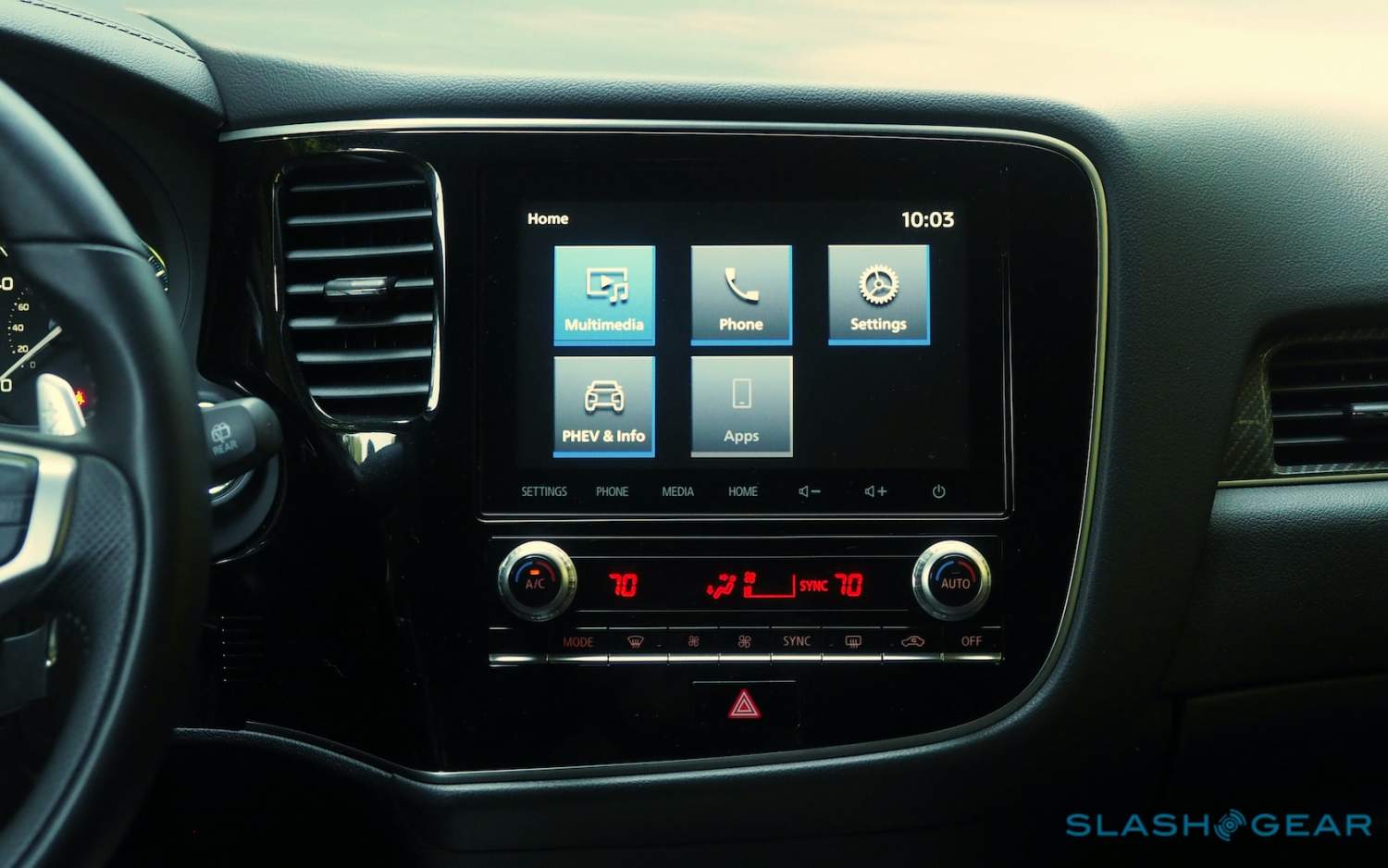 Generally, the gas engine acts as a range extender, independent from the wheels themselves. Hit the accelerator and you purr away on electric power, at least to begin with; get too demanding and the gas kicks in, with an unlovely grinding sound. Push really hard, meanwhile, and the Outlander PHEV’s gas engine can in fact directly drive the wheels, with any excess power shunted to the battery. 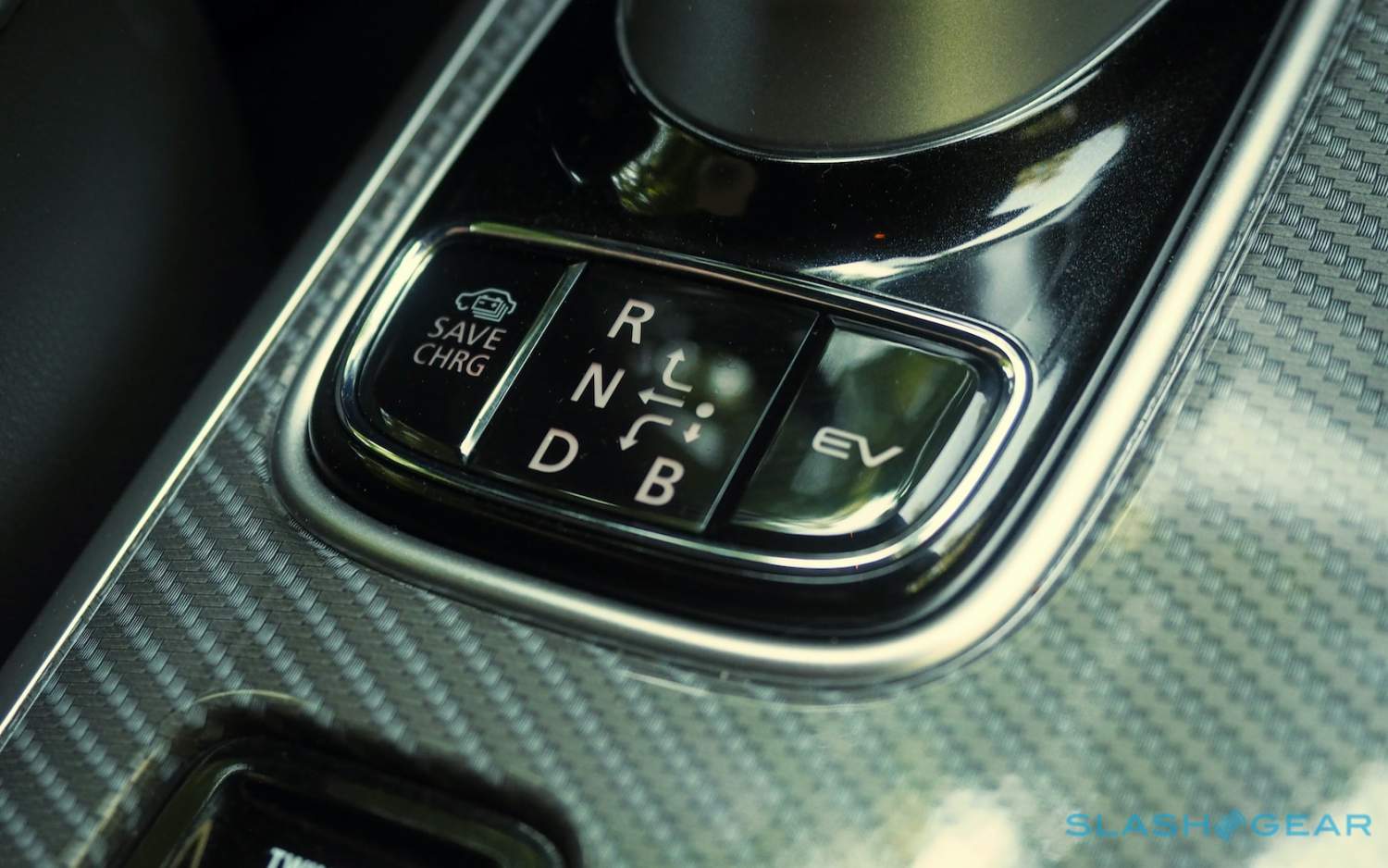 The Mitsubishi handles all that itself, but you do get some control over how the battery is used. Hit the “EV” button and the Outlander PHEV will try to use electric power alone for as long as that’s feasible; press the “Save Charge” button and it’ll preserve the current state of charge for you to use later on. Press that button again, and the SUV will actively try to recharge the battery with the gas engine, though it’s not a particularly efficient use of gas. 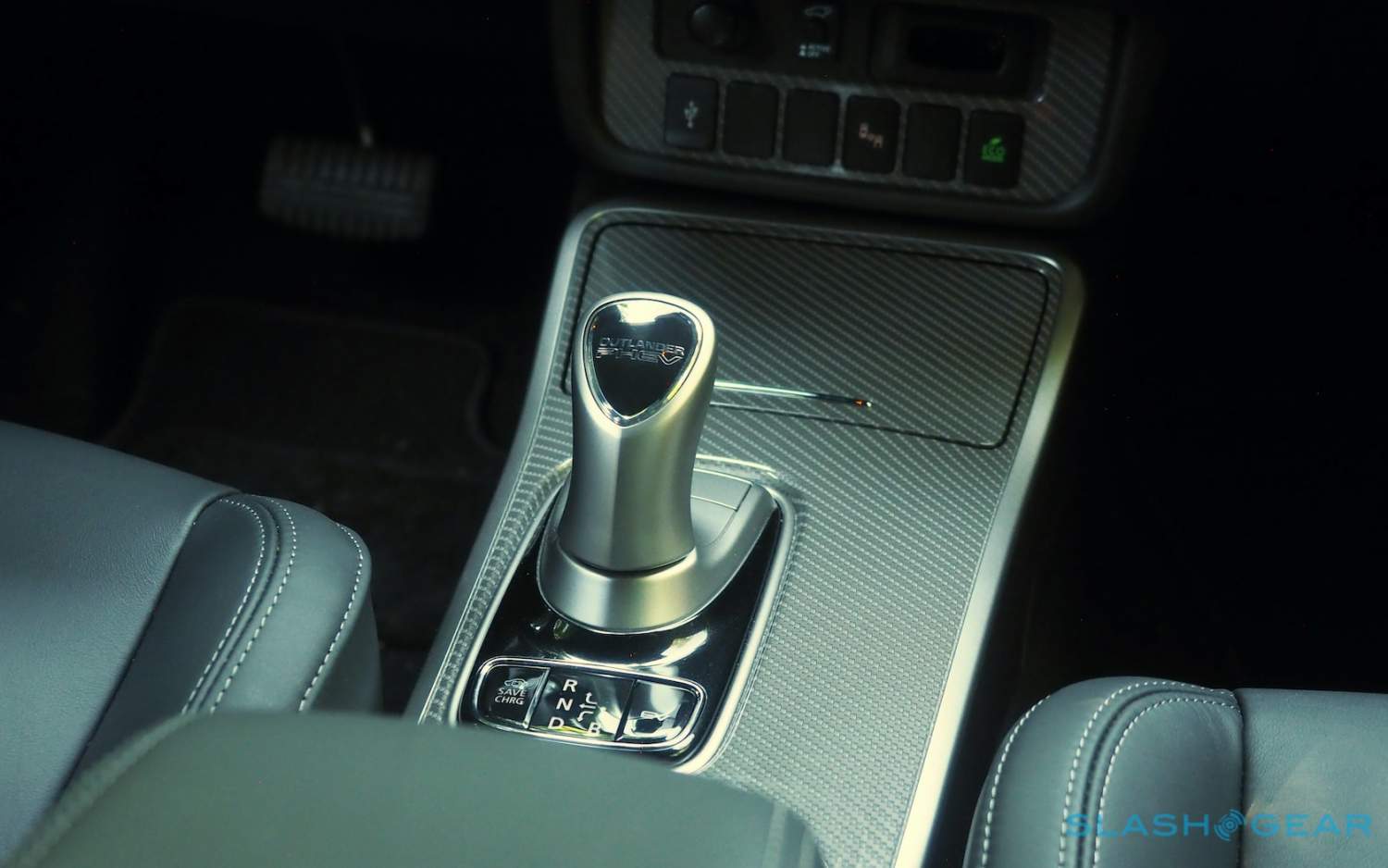 24 miles of electric range is not especially impressive, though plug-in hybrid SUVs are a relative rarity. The EPA says the Outlander PHEV is capable of 74 MPGe combined, though you’re looking at just 26 mpg from the gas engine alone once the battery is through. It’s hard to get too excited about that, when a Toyota RAV4 Prime plug-in hybrid is rated for 42 miles of electric range, 94 MPGe combined, and 38 mpg from its gas engine alone. The Toyota also has a higher tow rating: 2,500 pounds, versus the Outlander PHEV’s 1,500 pounds. 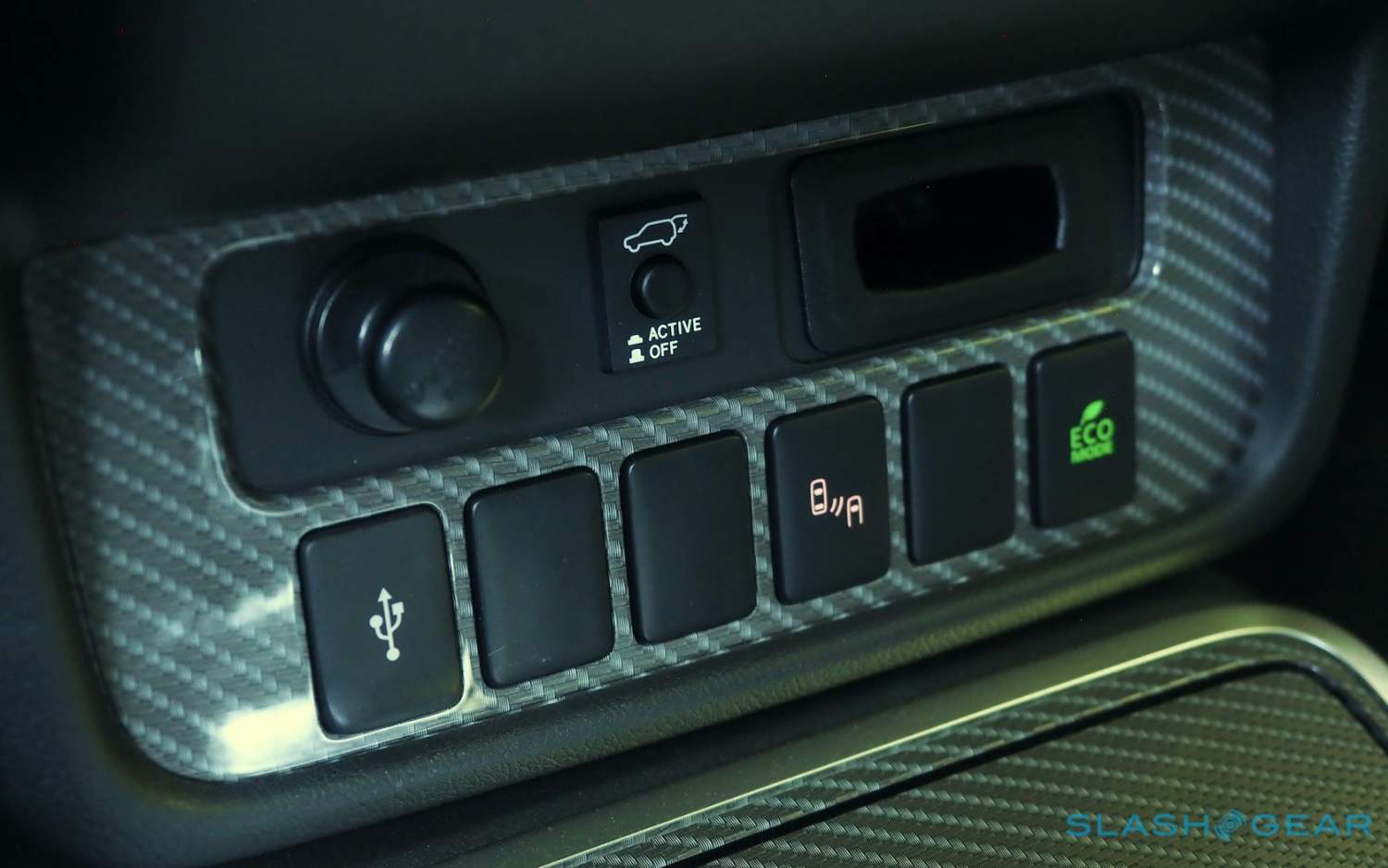 Both are five seaters: if you want seven seats in your Outlander, you’ll need to sacrifice the hybrid drivetrain. The 30.4 cu-ft trunk is slightly smaller than the Toyota’s, but at 66.6 cu-ft with the second row flat it edges just a little ahead of the RAV4 Prime. Mitsubishi does give you plenty of control over regenerative braking: the paddle shifters step through five levels of aggression, though I’d have liked the maximum regen to have been even more enthusiastic. 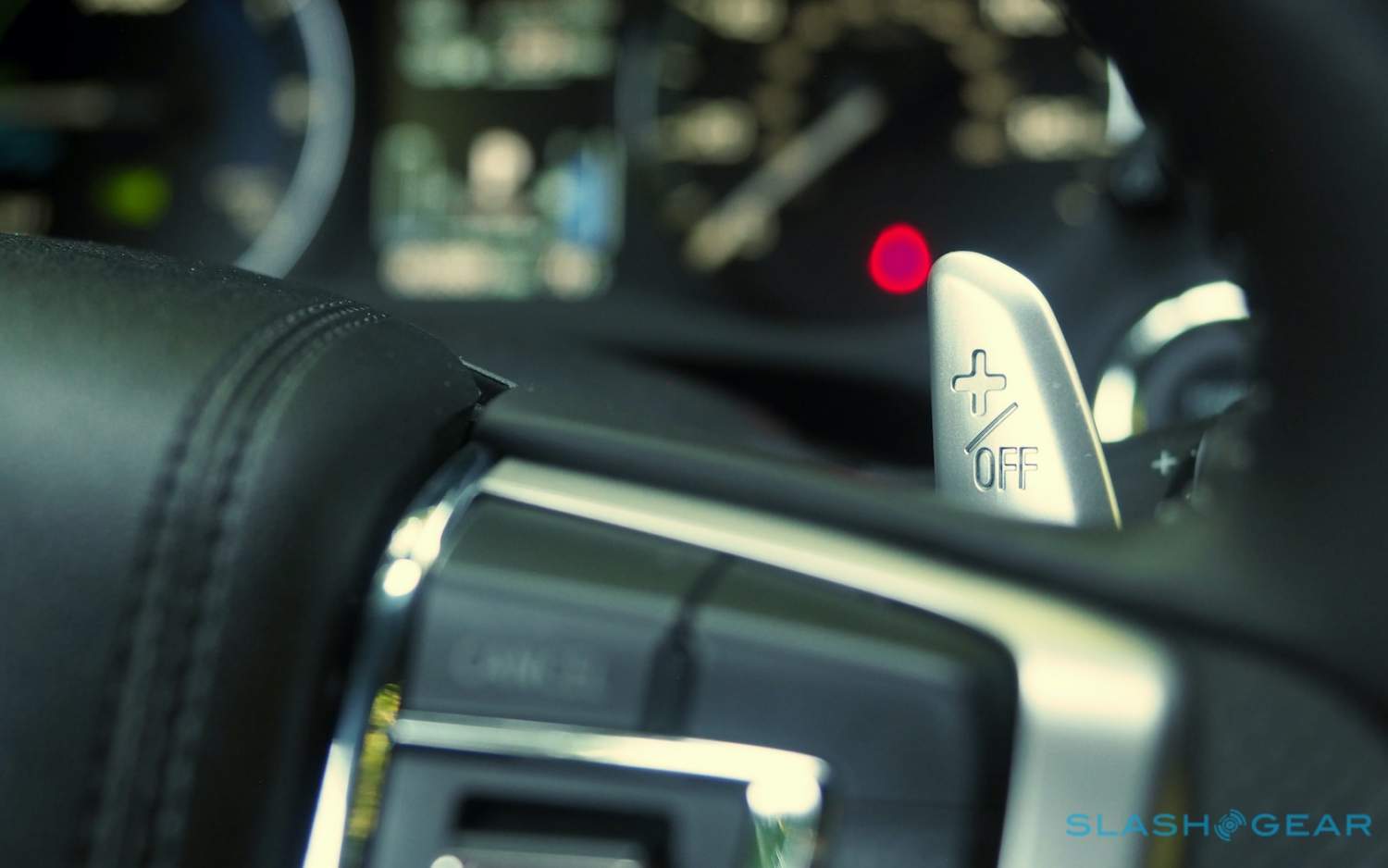 Generally, though, the Outlander PHEV drives just fine. There are five drive modes – Normal, Sport, Gravel, Snow, and S-AWC Eco – and exactly how much power you get overall depends on which hybrid mode the SUV is in. The twin electric motors have 174 horsepower and 245 lb-ft of torque, but when the gas engine is driving the front wheels you get more like 220 hp and 291 lb-ft overall. 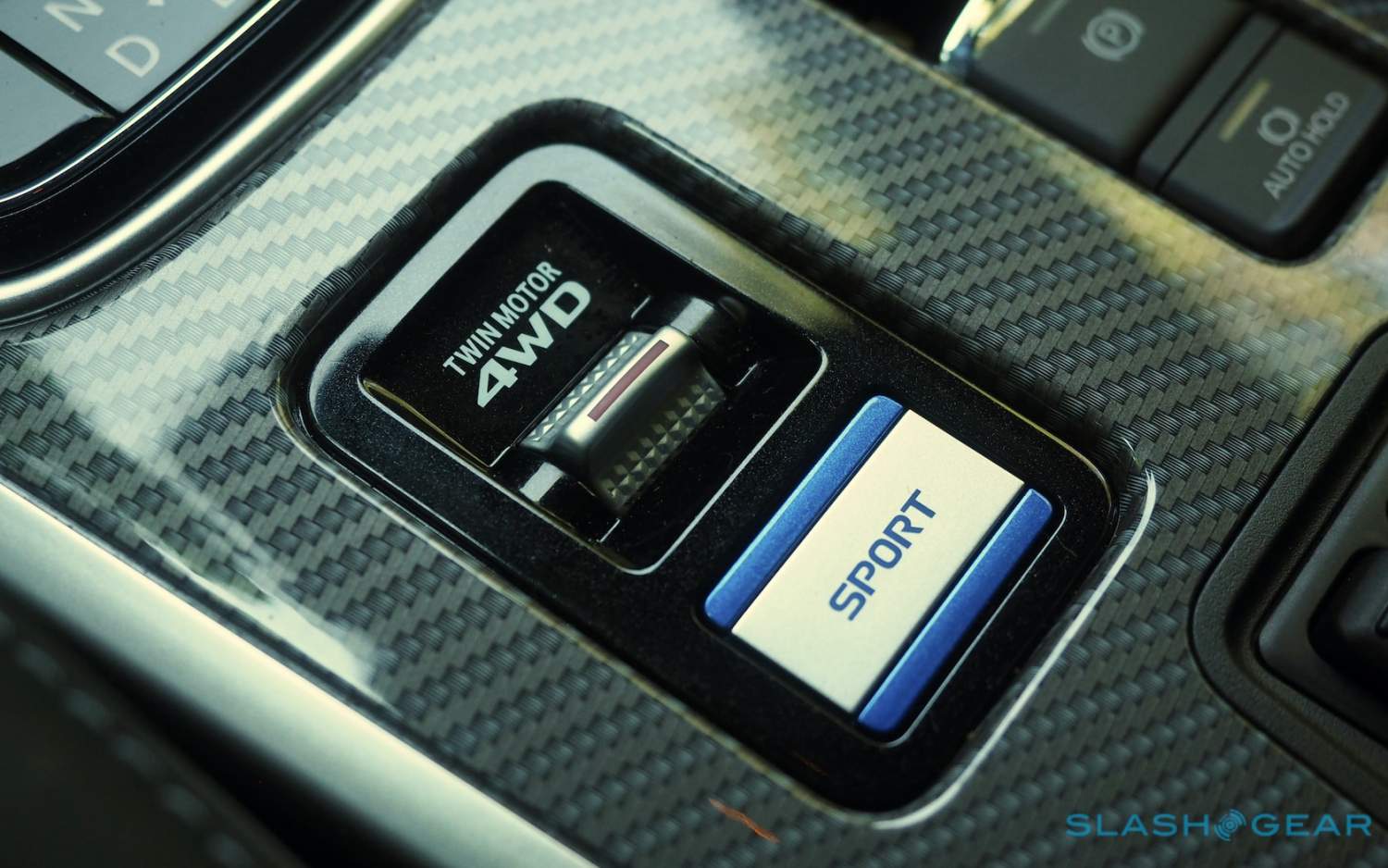 It feels perky from a standing start, and zipping around urban roads belies the Outlander PHEV’s size. It’s only when you start to stretch its legs a little further that the perkiness fades. That said, Mitsubishi’s steering is soft and a little vague, and the suspension is definitely tuned on the squishy side, so there’s really nothing here encouraging you to drive enthusiastically. 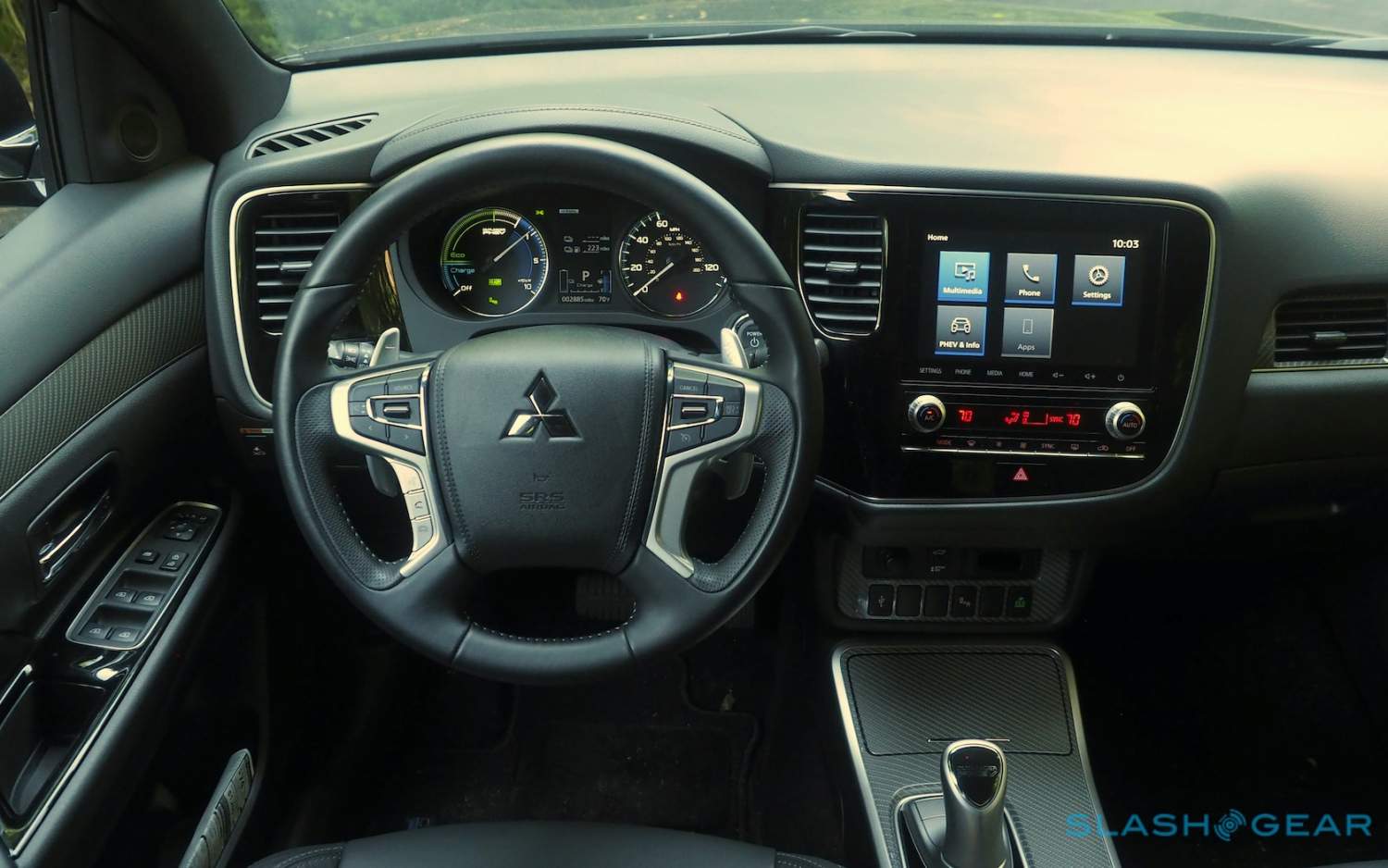 When it’s time to charge up, a regular 120V outlet will take 9-14.5 hours depending on the amperage of your outlet; install a Level 2 charger, as is wise, and you’re looking at 4 hours with a 240V/16A supply. Unusually for a car in this segment, Mitsubishi has included DC fast charging support, though you’ll perhaps be unsurprised to hear it opted for the less-typical CHAdeMO standard rather than the far more common CCS plug. Still, if you can find a compatible plug, taking the 13.8 kWh li-ion battery from flat to 80-percent is about 25 minutes.

There is something oddly charming about the Outlander PHEV. Mitsubishi seems to have approached the plug-in hybrid with the best of intentions, but then delivered on those ambitions in a bemusing way. DC fast charging support is great, but CHAdeMO feels like the wrong plug type to choose; the cabin is well-equipped, but feels like it was designed by several different teams who only started talking when it came time to piece their handiwork together. 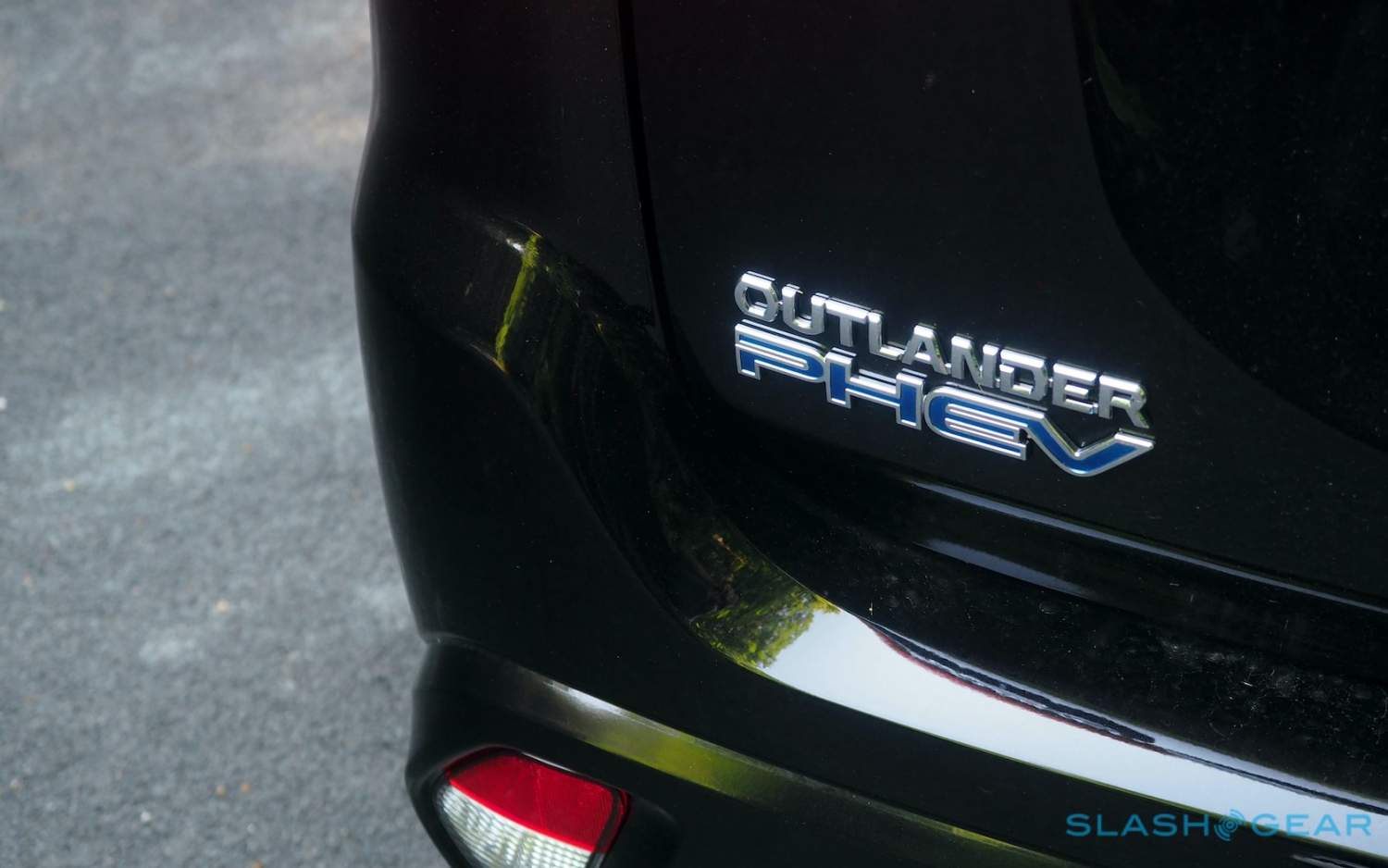 It makes the most sense as a value play, and Mitsubishi clearly isn’t unaware of that fact. Toyota’s PHEV SUV may have more range, but the Outlander PHEV is cheaper upfront and Mitsubishi’s lease and finance deals are more generous. A 10 year/100,000 mile powertrain and battery warranty, plus a 5 year/60,000 standard warranty, is impressive too. That’s no small factor in what remains a sub-category with limited options. 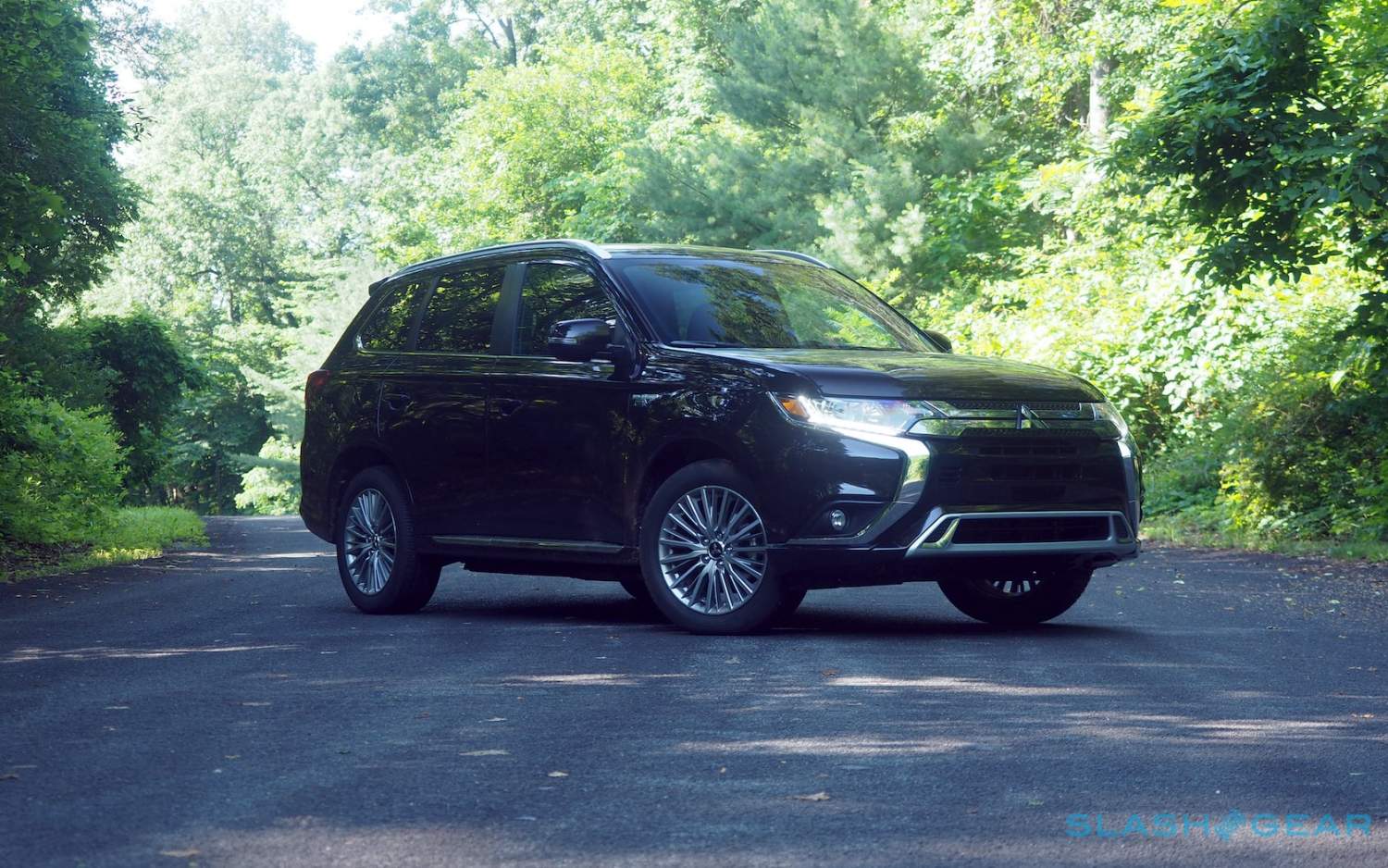 If you have a place to regularly charge, can stomach the foibles, and are on a strict budget, the 2021 Outlander PHEV could fit the bill. Those looking for rewarding driving or maximum EV range should look elsewhere, but Mitsubishi’s pricing and warranty coverage makes it a lot easier to overlook its hybrid SUV’s shortcomings, if you’re committed to going at least a little bit electric.