Wait, isn’t the new Kia Seltos supposed to be the baby Telluride? True, but the 2021 Kia Sorento is also following the footsteps of the magnificent Telluride, and that’s a good thing. You see, the Kia Telluride has an open secret: It’s one of the best three-row SUVs you can buy today. And based on what we’re seeing, it seems the new Sorento is destined to move the goalpost even further.

The previous third-generation Sorento was not a bad-looking car, but the new fourth-gen model is beaming with pride. It has a new angular front bumper and horizontal grille similar to the Seltos. The sharper lines and elongated proportions of the vehicle connotes dynamism and confidence. The Sorento is riding on Kia’s new-generation midsize SUV platform, and it’s also the first vehicle to utilize this new chassis design.

The new Kia Sorento has a visibly larger yet tauter body style than the outgoing model. This means a larger cabin and more cargo space in the back. According to Kia’s press release, the new Sorento is among the most versatile and spacious three-row SUVs to hit the road. It may not be obvious at first glance, but the new Sorento is 10 mm longer, 10 mm taller, and exactly 10 mm wider than the old model. It also has shorter front and rear overhangs for a sportier appearance. 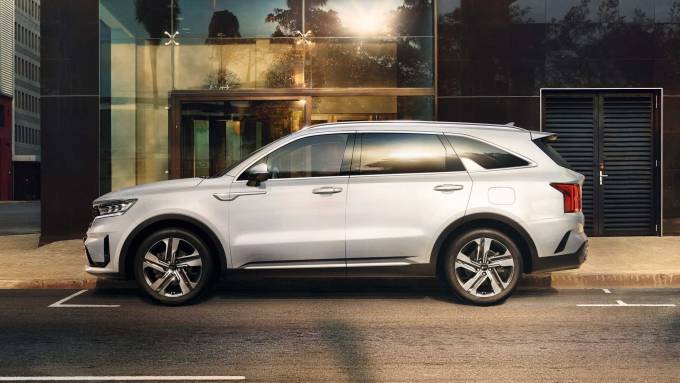 But the biggest news is the wheelbase, which is now 35 mm longer. This enabled Kia to draw the A-pillar 30 mm further back from the front axle to give the new Sorento a longer bonnet. Also, Kia retained the familiar D-pillar design and wheel arch cladding as part of Sorento’s DNA.

At the back, the new Sorento is clearly inspired by the rugged-premium design of the Telluride. You’ll find a pair of snazzy vertical taillamps that elegantly wrap around the bodywork along with dual tailpipes and bold SORENTO lettering across the tailgate. The car also has front and rear skid plates and an integrated spoiler to complete the sporting vibe.

The fourth-gen Sorento is also the first in its lineage to receive an electrified hybrid powertrain. It combines a 1.6-liter turbocharged gasoline mill with a 44.2 kW electric motor. Drawing power from a 1.49 kWh battery pack, the combined out is a thrilling 227-horsepower and 258 lb-ft of torque, all of which are routed to all four wheels via a six-speed automatic gearbox. 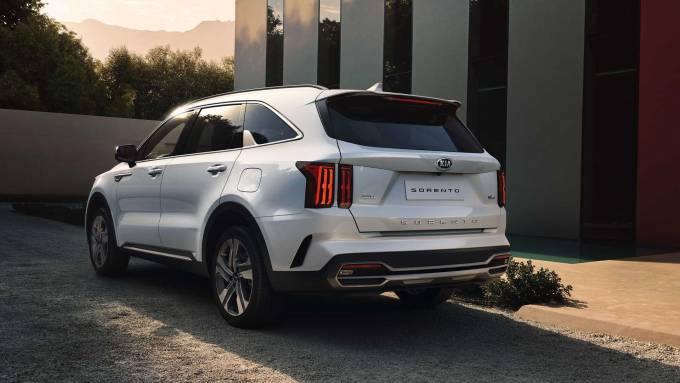 European-spec Sorentos will also have the option of a 2.2-liter diesel engine with 199-horsepower and 325 lb-ft of torque. Mated to a new eight-speed dual-clutch automatic transmission, the diesel is perfect if you’re highly concerned about fuel economy. However, the crème of the crop is a 2.5-liter turbocharged four-banger lifted from Genesis GV80. It produces 277-horsepower and 310 lb-ft of torque and is connected to an eight-speed automatic. Front-wheel drive is standard while all-wheel drive is optional across the range of motors.

Inside, the new Kia Sorento features an upscale and tech-filled cabin. The driver gets to stare at a 12.3-inch digital instrument display while there’s a 10.25-inch infotainment touchscreen display with Apple CarPlay/Android Auto connectivity. It also has vertical air vents with chrome trim that extends to the center console below. The cabin is splattered with a varied mix of leather, metal, and satin-embossed surfaces. In short, it’s a nice place to be whether sitting idly in traffic or cruising effortlessly on the highway. 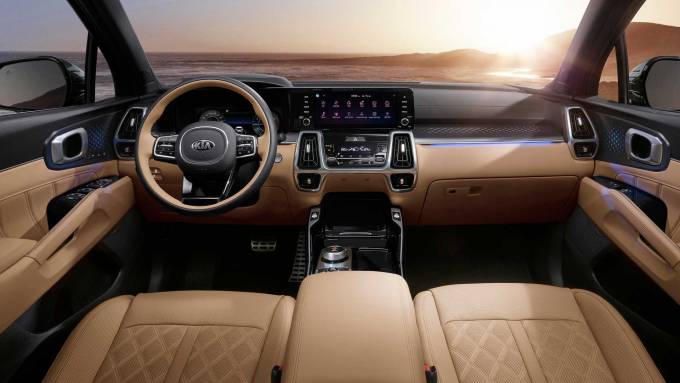 And since the Sorento is still a family-oriented SUV, it remains a practical hauler even in its optional seven-seat configuration. The third row can now adjust 45 mm further to deliver better legroom, making it better suited for adults rather than small children. And with the third-row seats in the upright position, there’s now 32-percent more boot space than before. Choose the five-seat model and you have 910 liters of cargo space to play with.

On the safety front, the 2021 Sorento is equipped with blind-spot assist with collision avoidance, forward collision avoidance assist, and a surround-view monitor depending on the trim model. Other safety features include lane following assist, driver attention warning, smart cruise control, and highway driving assist. 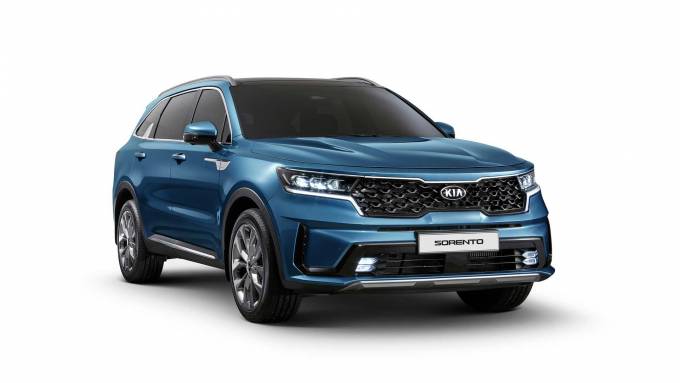 The 2021 Kia Sorento arrives in Europe in the third quarter of 2020. Meanwhile, the U.S. and other markets can expect first deliveries to begin by the end of the year. North American models will be built at Kia’s West Point manufacturing plant in Georgia.