Bentley has officially revealed the 2021 Bentayga Speed, its most potent luxury SUV, with a 6.0-liter W12 engine capable of hitting 190 mph. Second in the refreshed Bentayga family, the new Speed model is no less lavish than the Bentayga V8, but it packs 626 horsepower and 664 lb-ft of torque under the hood.

0-62 mph, then, comes in just 3.9 seconds. Peak torque hits from just 1,500 rpm and lasts all the way to 5,000 rpm, Bentley promises, dismissing in the process any potential concerns about twin-turbo lag. 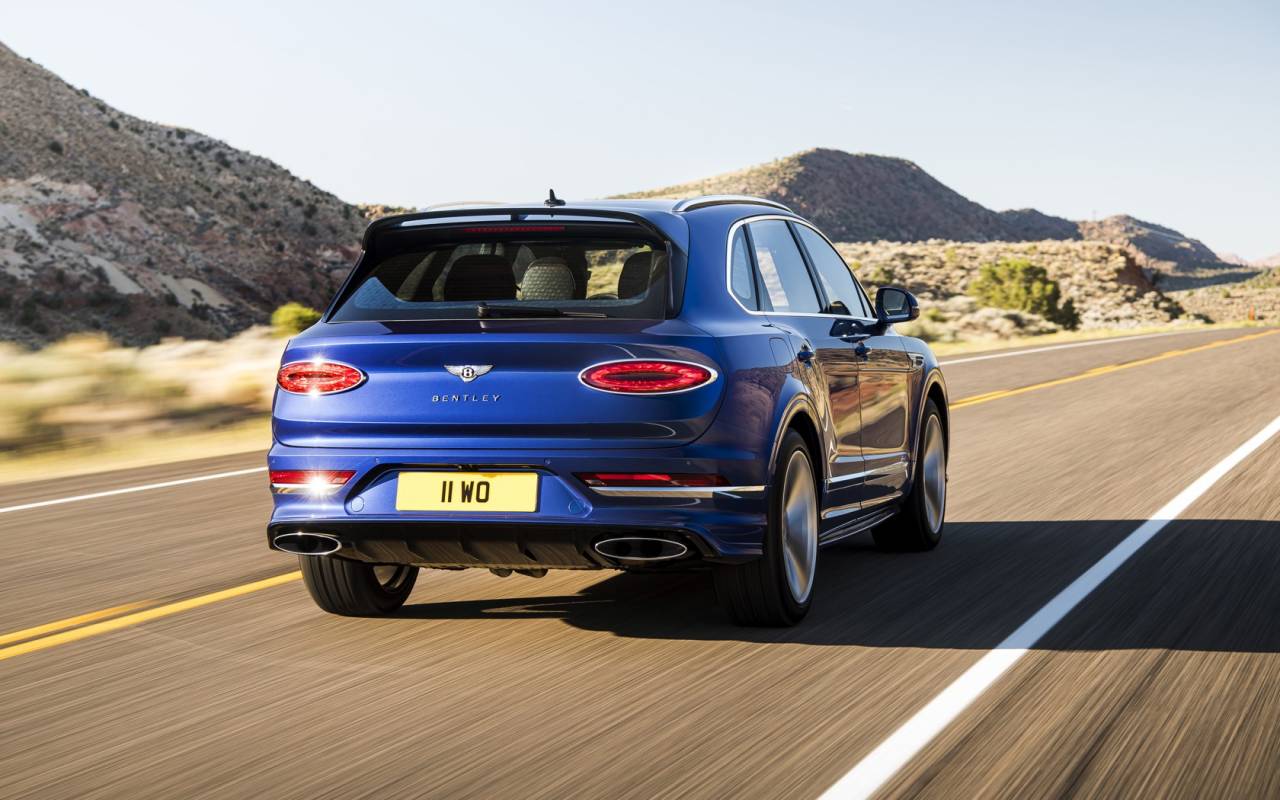 When you’re not hurtling toward the horizon, meanwhile, the W12 can actually deactivate half of its cylinders when they’re not required. That turns it into a six-cylinder engine that, though probably still not entirely frugal, does at least make a nod to economy and emissions reduction. Similarly, take your foot off the gas when you’re cruising on the highway, and the Bentayga Speed can decouple the engine and cruise even more efficiently. 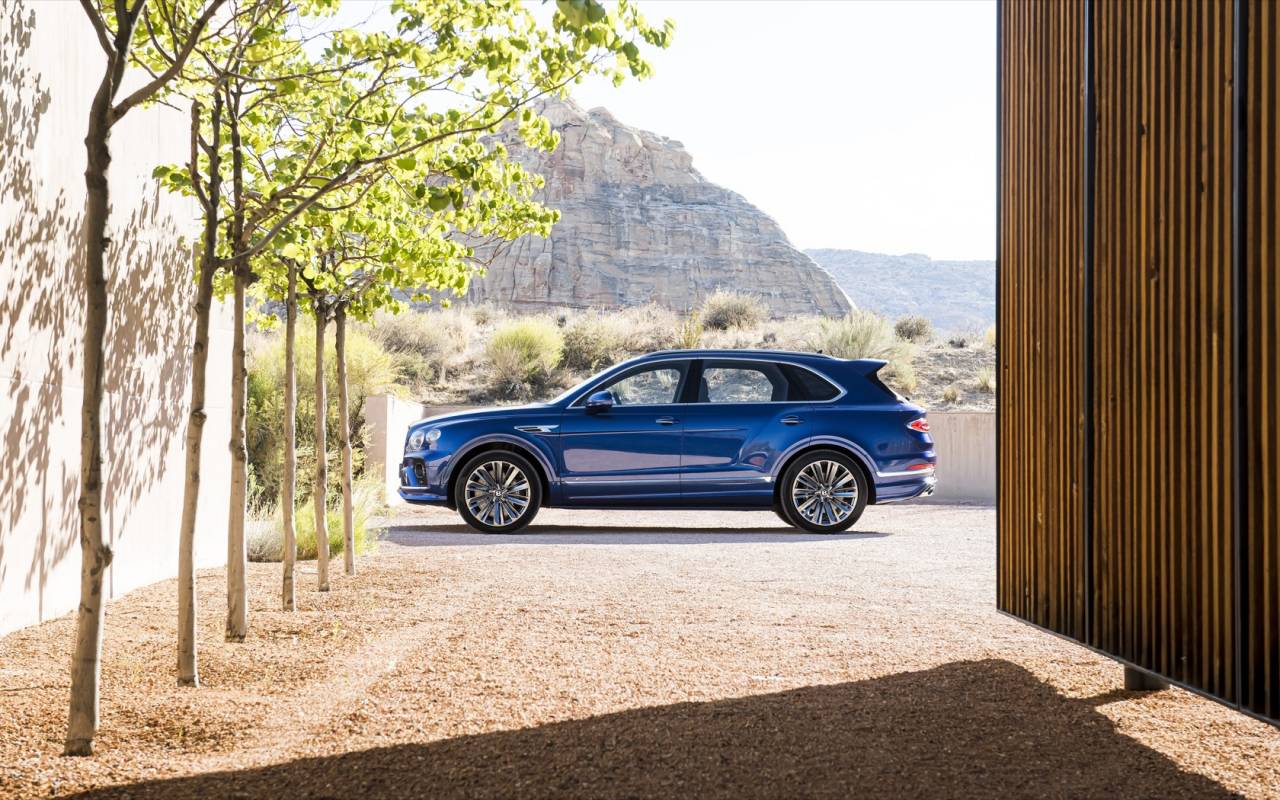 To distinguish the Bentayga Speed from the V8 and the upcoming Bentayga Hybrid, Bentley adds dark-tint headlamps, body-colored side skirts, new front and rear bumpers, and a new elongated tailgate spoiler. A matching dark tint to the front grille mesh, special 22-inch wheels – either polished or dark-tint – and new oval tailpipe finishers are included too. 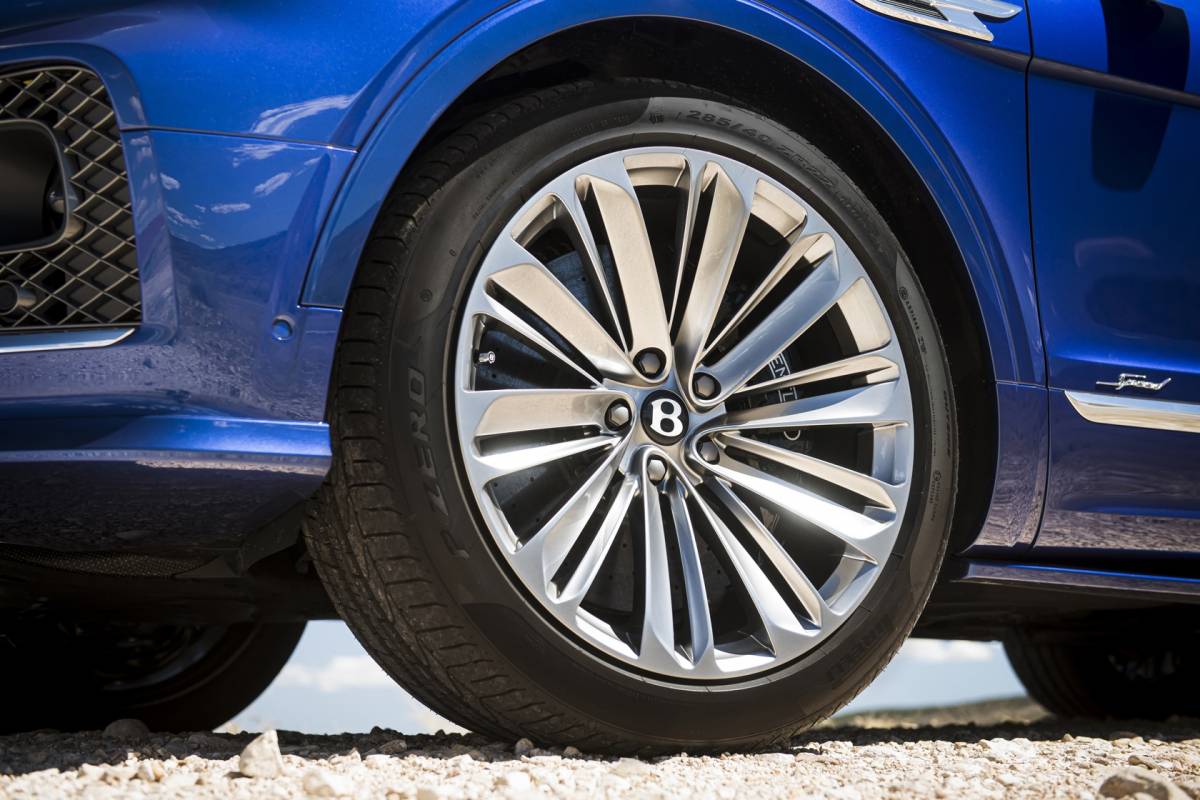 If that leaves the Bentayga Speed still too glossy for you, a Black Specification promises to squeeze out what little brightwork remains. It replaces the chrome and some body elements with gloss black or carbon fiber versions, including a hand-crafted carbon fiber front bumper splitter and matching side sills. The 22-inch wheels and exhaust finishers are given a gloss-black treatment too, and the roof spoiler is swapped for a curved carbon fiber version. 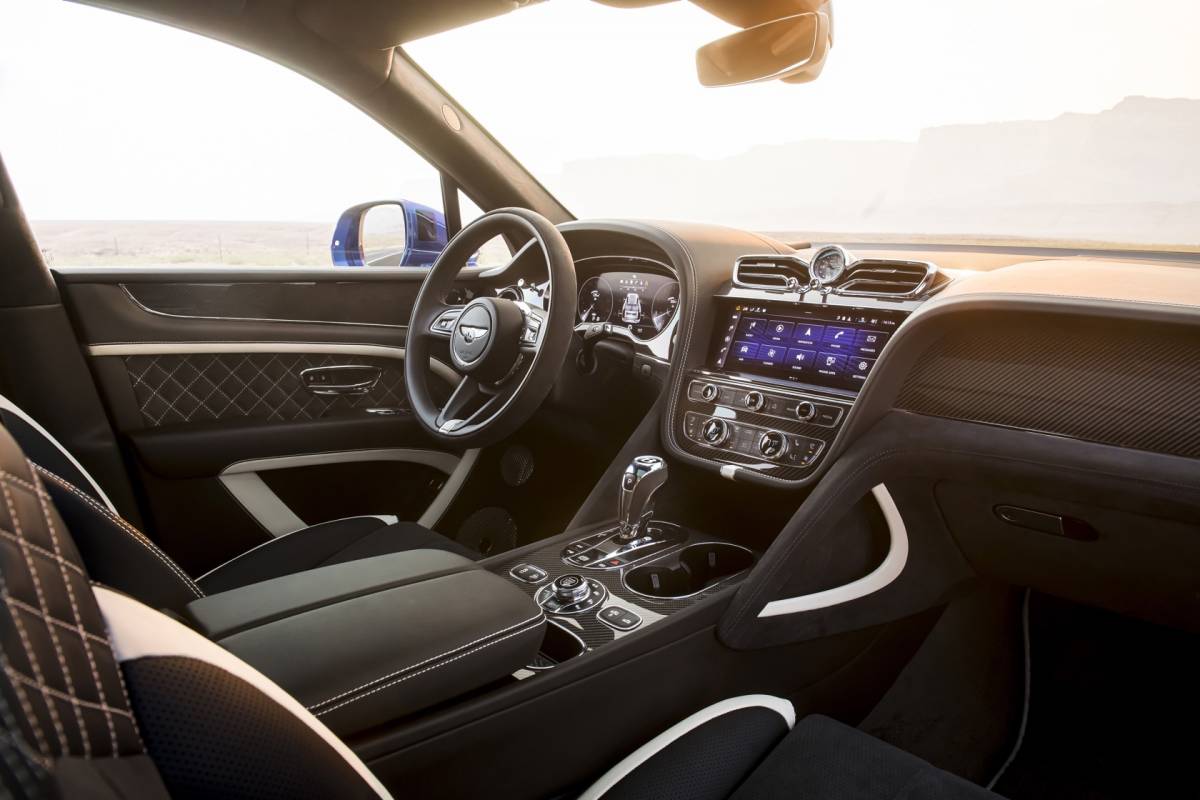 Inside, there’s a special Speed color split for the leather. Dark primary hide is set off by “swooshes” of contrast leather on the doors, seat cushions, backrest bolsters, and on the lower console. Alcantara is used, too, on the seat cushions and backrest center panels, along with the transmission shifter, steering wheel, lower knee trim areas, upper pillar trim, and on the headliner. Alternatively, the Leather Specification switches that for hide.

“Speed” or Bentley logo stitching in the seat-backs is standard, and there’s a new contrast stitching design in the diamond quilting. That’s included in the Mulliner Driving Specification, which is standard-fit on the Bentayga Speed, and pairs one row of leather-matched stitching with another in the cabin’s contrast color. The whole thing is finished off with metal Speed badging and Speed-illuminated tread plates. 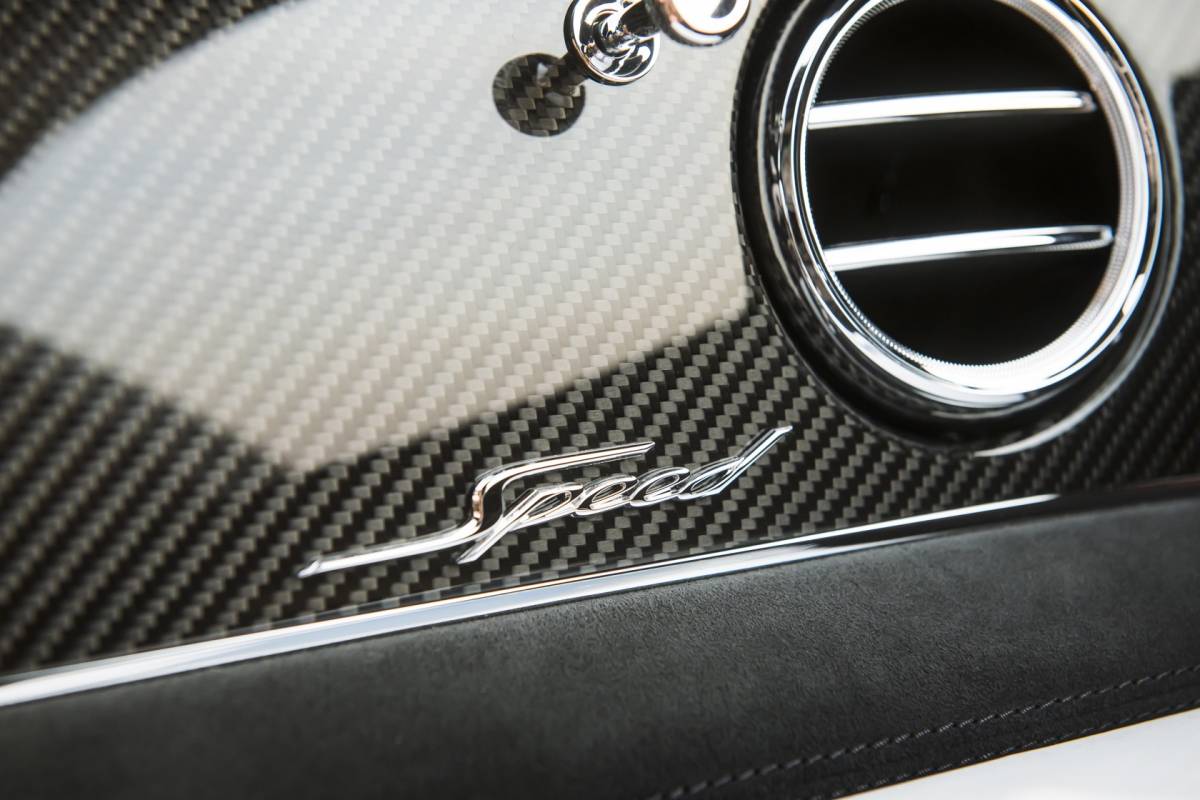 Like the 2021 Bentayga V8, there’s a new infotainment system with a 10.9-inch touchscreen in the redesigned center console, plus a fully-digital instrument binnacle. Android Auto and wireless Apple CarPlay are standard, plus multiple USB-C ports and a head-up display. 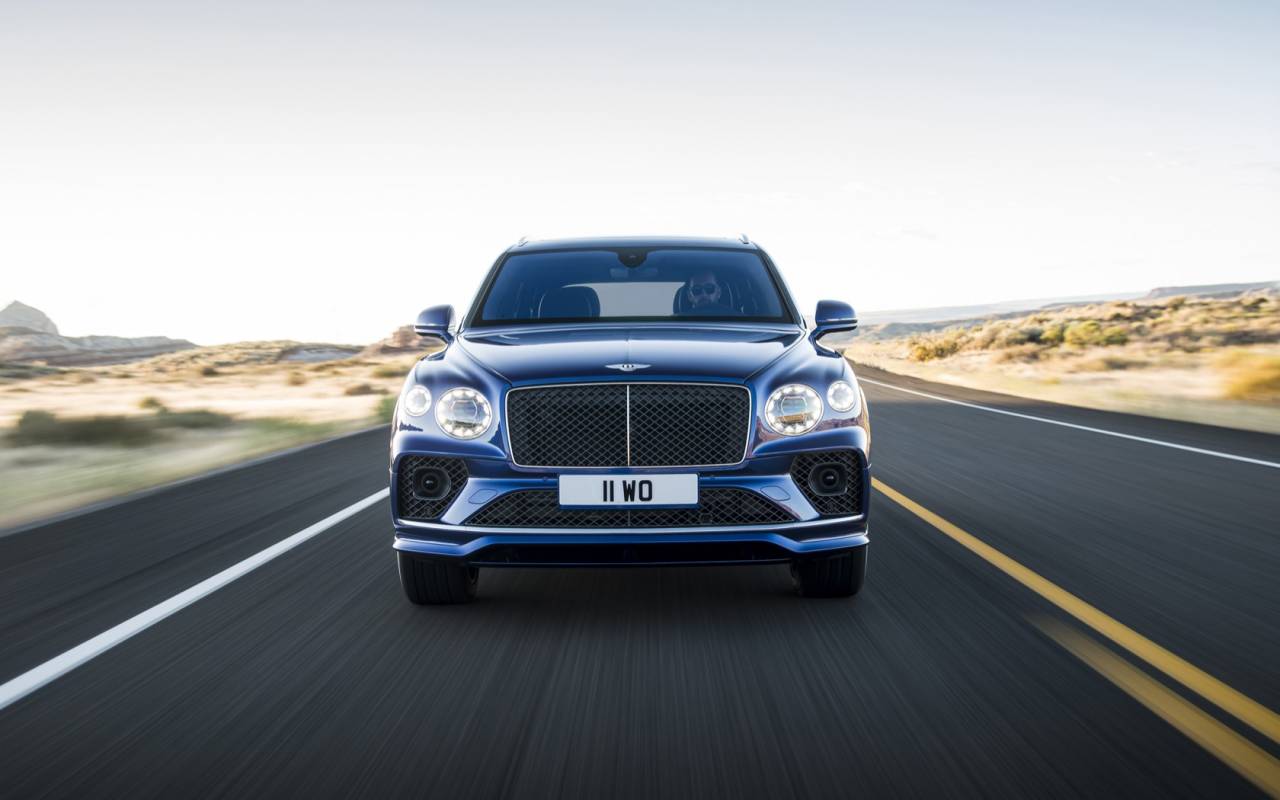 Bentley says that the 2021 Bentayga Speed will be on sale in the US come Q1 2021. It’ll be priced from $245,000. As for other markets, it’s focusing on those “where demand for 12-cylinder SUVs remains strong”; figure the Middle East and Asia Pacific along with the Americas.