The Audi Q5 may be a compact crossover, but in sales terms it’s a juggernaut. Gaining in popularity every year since it first launched in 2009, it’s not only Audi’s best-seller but the centerpiece of the automaker’s balance of technology, prestige, performance, and value. For the 2021 Q5 45 TFSI, then, there’s a lot riding on its teutonic shoulders.

It’s the entry point to a new, three-strong Q5 lineup in the US, kicking off at $43,300 (plus $1,095 destination). Audi’s numerical nomenclature may still be confusing, but all you need to know is that the 2.0-liter turbocharged four-cylinder engine now makes 261 horsepower, up 13 hp over the old version, and 273 lb-ft of torque. 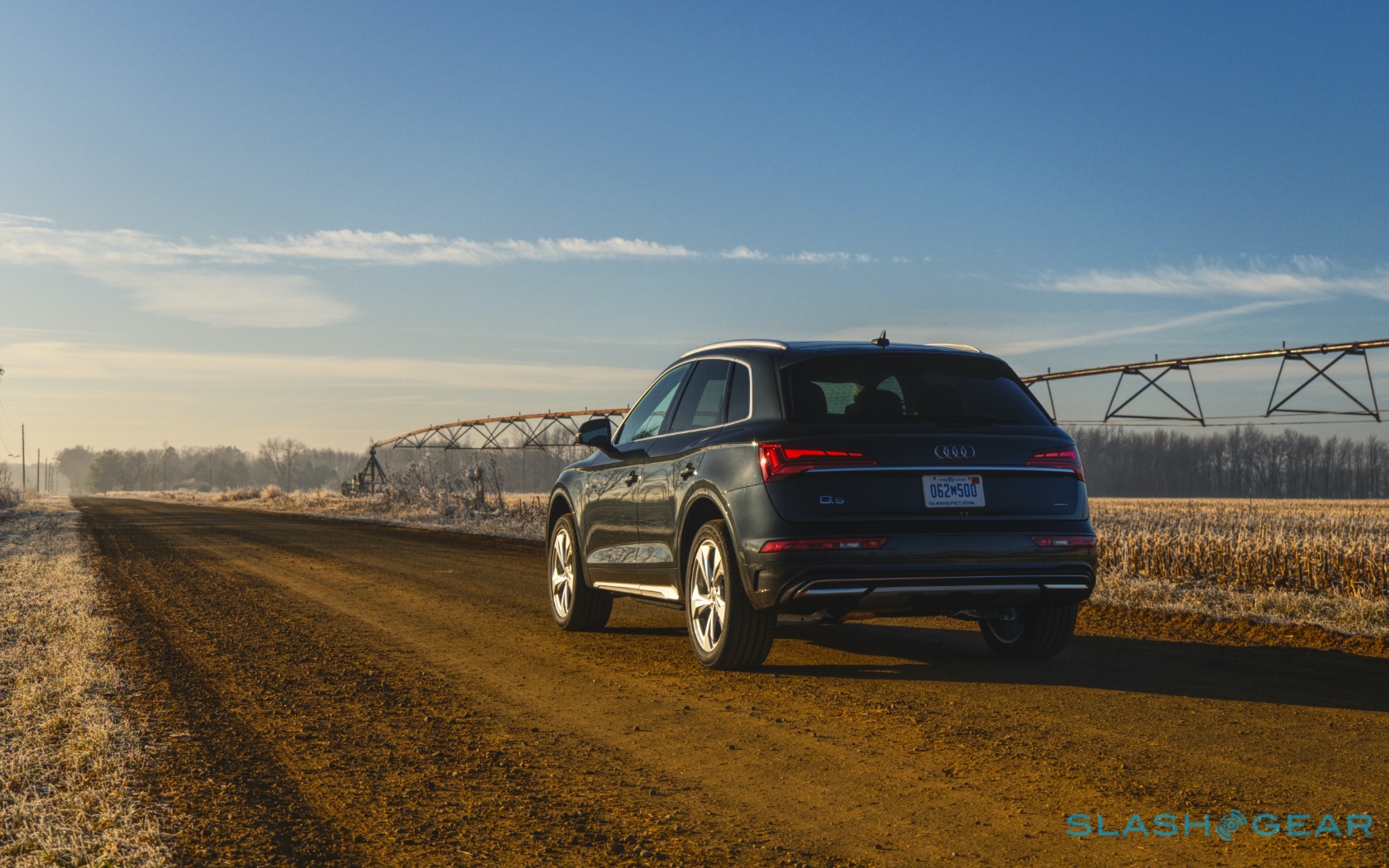 It’s paired with a 7-speed S tronic dual-clutch automatic transmission, and Quattro with Ultra all-wheel drive comes as standard. As a mild-hybrid, Audi taps some of what would otherwise be waste energy to power things like cabin tech, though if you want a proper plug-in hybrid you’ll need to step up to the Q5 55 TFSI e. 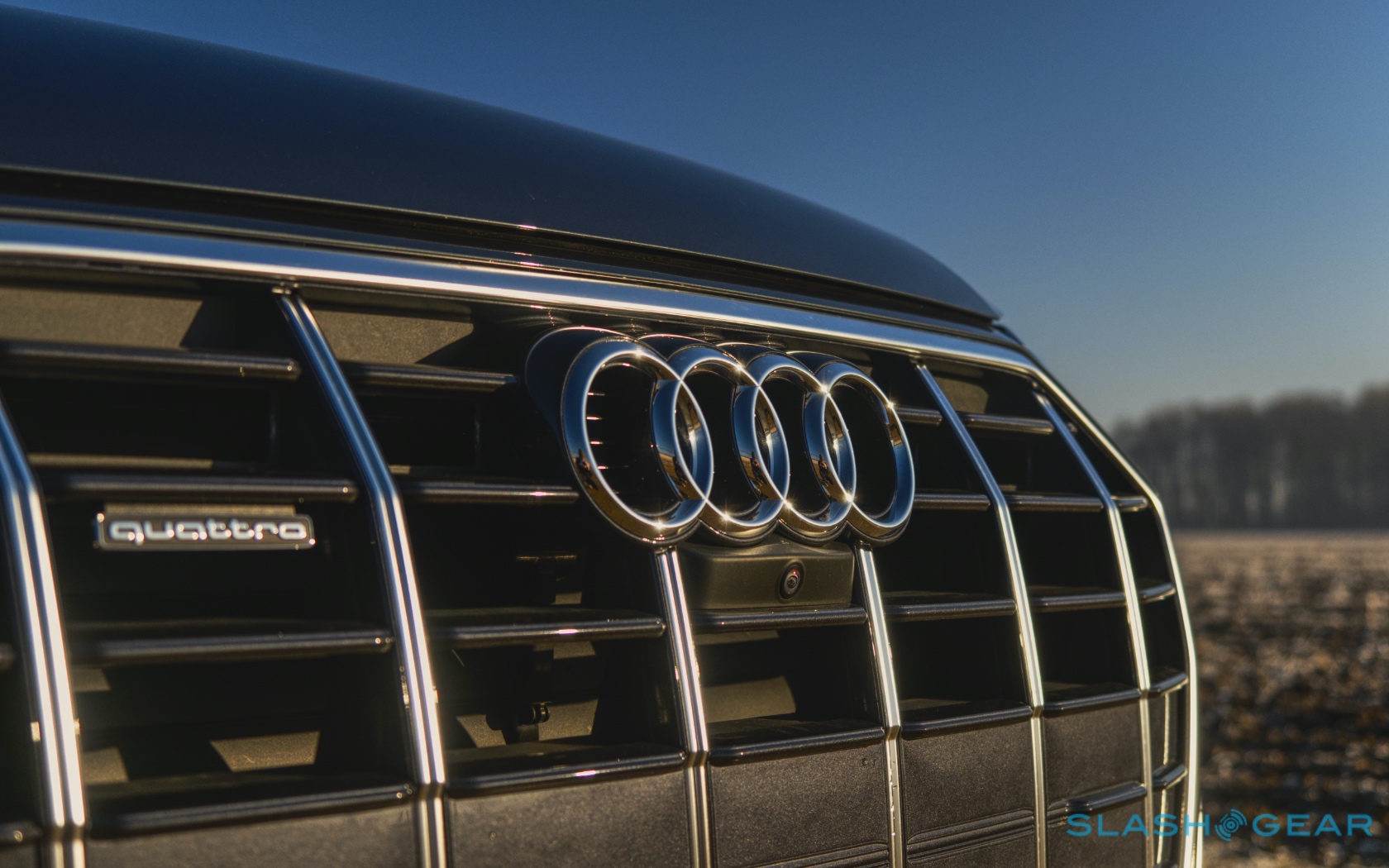 Even without the addition of electric grunt, it’s a perky little SUV. 0-60 mph arrives in 5.7 seconds – a fifth of a second faster than before – and top speed is 130 mph. Audi’s 2.0-liter is a familiar thing by now, though none the worse for that. It’s tuned, along with the gearbox, for eager getaways from the lights and from stop signs, and feels ample if not outright fast. 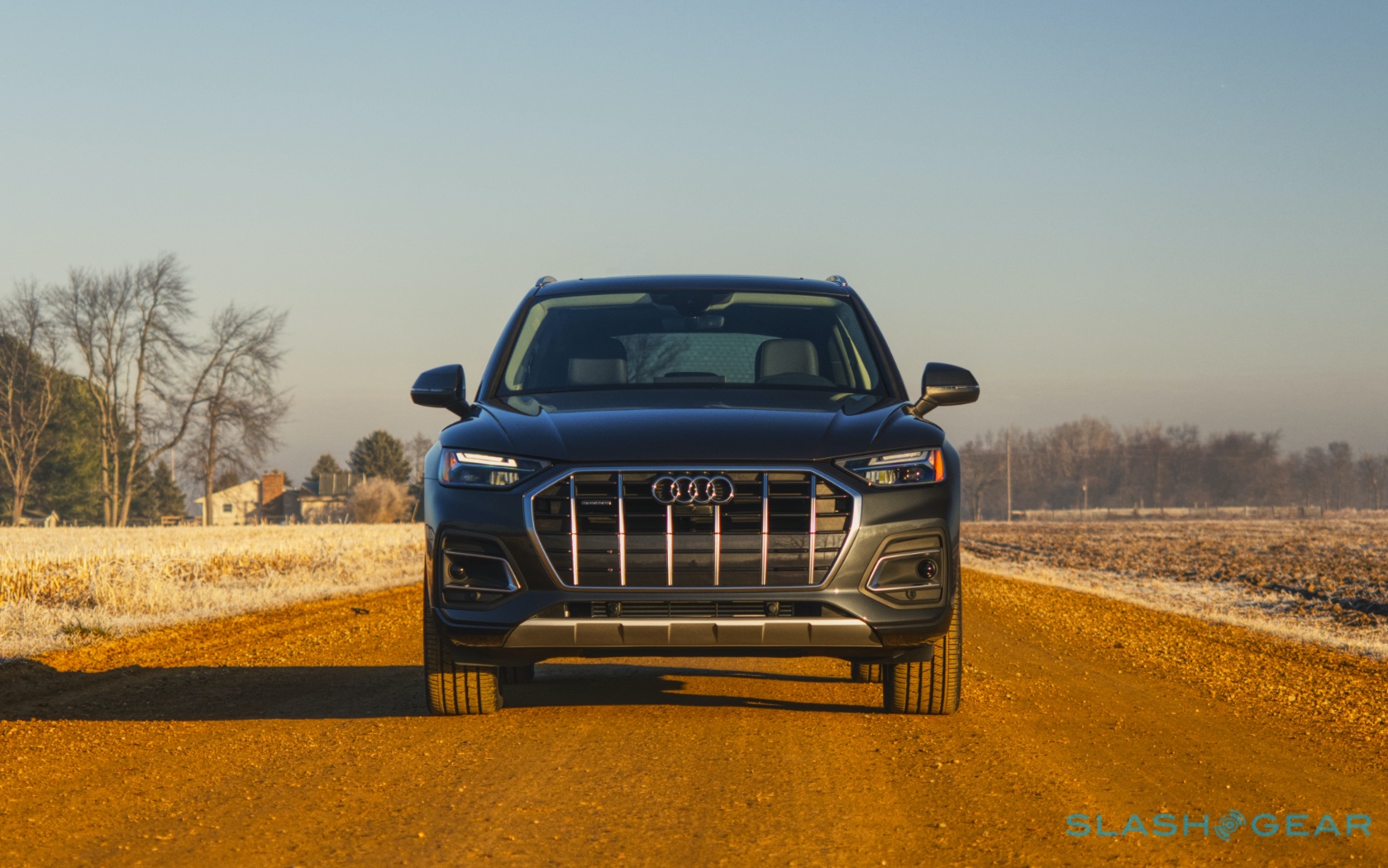 The Ultra flavor of Audi’s all-wheel drive tech promises more fuel economy – the EPA says you’ll see 23 mph in the city, 28 mpg on the highway, and 25 mpg combined, which seemed reasonable in the few days I spent with the Q5 – without compromising on stability. It biases to front-wheel drive as much as possible, using a multiplate clutch to connect or disconnect the driveshaft powering the rear axle. When that should happen depends on a whole host of sensors that both predict and react to road and driving conditions. 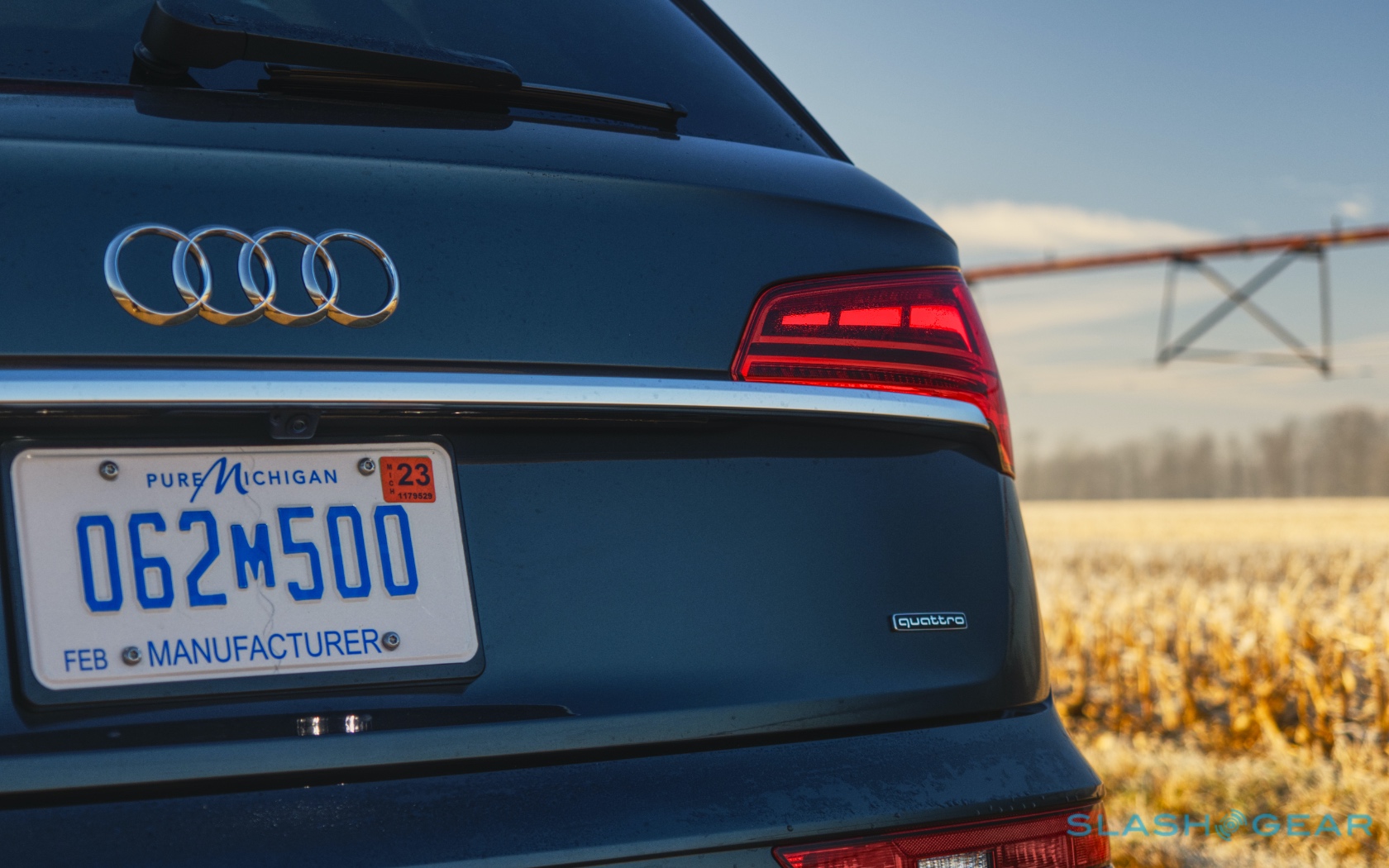 For the vast majority of drivers, and probably almost every Q5 owner, I suspect it’s the perfect combination of capability and efficiency. The 2021 Q5 isn’t exactly a powerhouse, nor the sort of car you’d choose first to take out on canyon roads; there’s a V6-powered 2021 SQ5 if you want more agility dialed in. All the same, on slippery roads, through sweeping bends and tighter little jinks, the new Q5 holds up admirably.

The suspension is set up on the stiff side – unlike more expensive Audi SUVs, you don’t get adaptive dampers or air suspension – but it’s comfortable and fairly car-like. It’s rated to tow up to 4,400 pounds, and there’s a special Off-road mode in the drive select system alongside the usual Dynamic and Comfort. 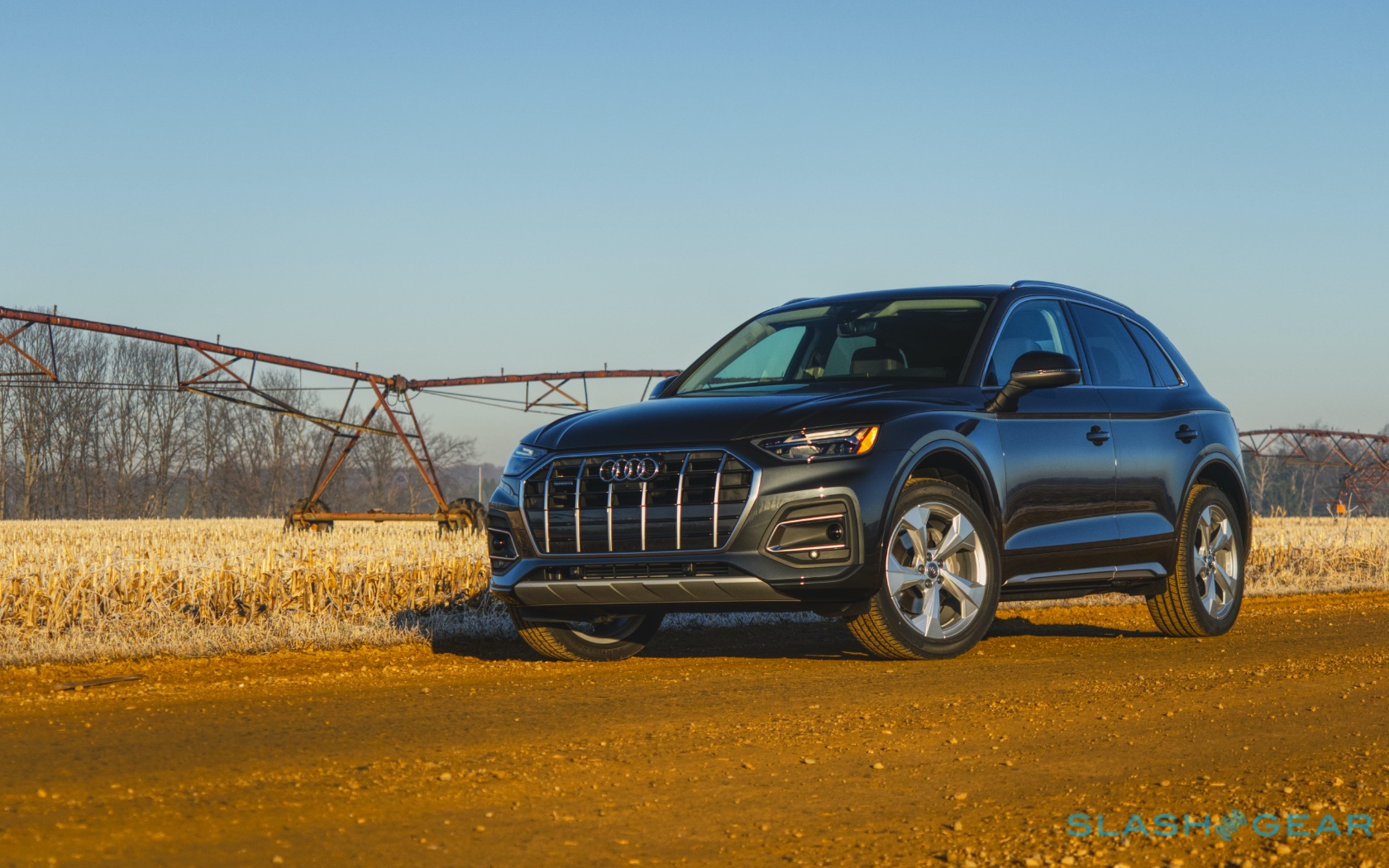 As with the drivetrain, the styling has had a thoughtful massage rather than a complete overhaul. The old Q5 was handsome, and this 2021 refresh adds LED lights as standard, a thinner and wider Singleframe grille, redesigned side sills and wheel arch trims, and new taillight clusters with a horizontal bar that spans the trunk of the crossover. 18-inch 5-arm-star alloys are standard; 19-inch and 20-inch versions are available, while the Q5 Prestige throws in Audi’s fancier Matrix-design LED headlamps with washers. 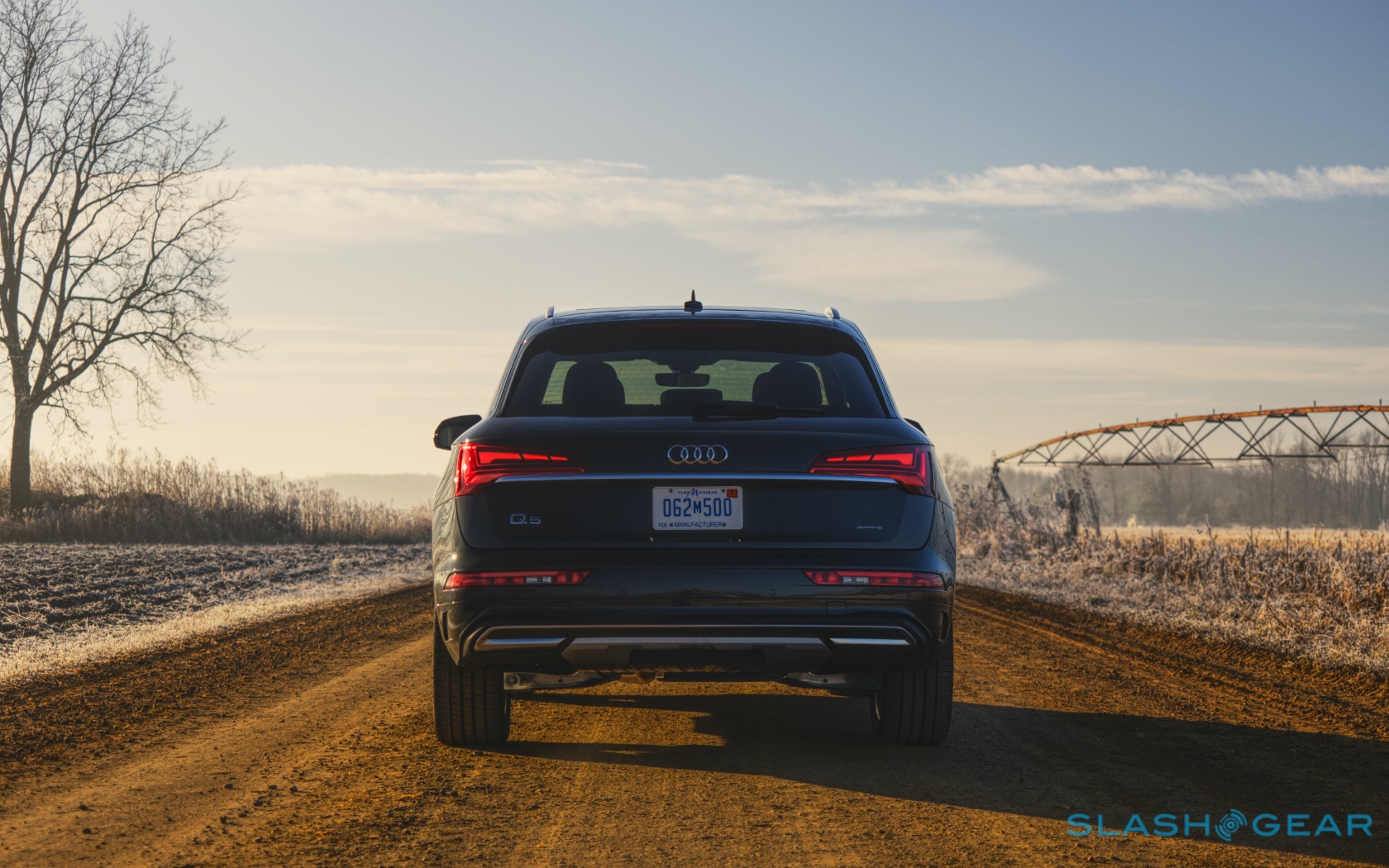 I was more impressed with the cabin changes. When I drove the 2020 Q5 earlier this year, the dashboard tech fell a little flat compared to what I knew Audi is capable of; this 2021 version addresses that. 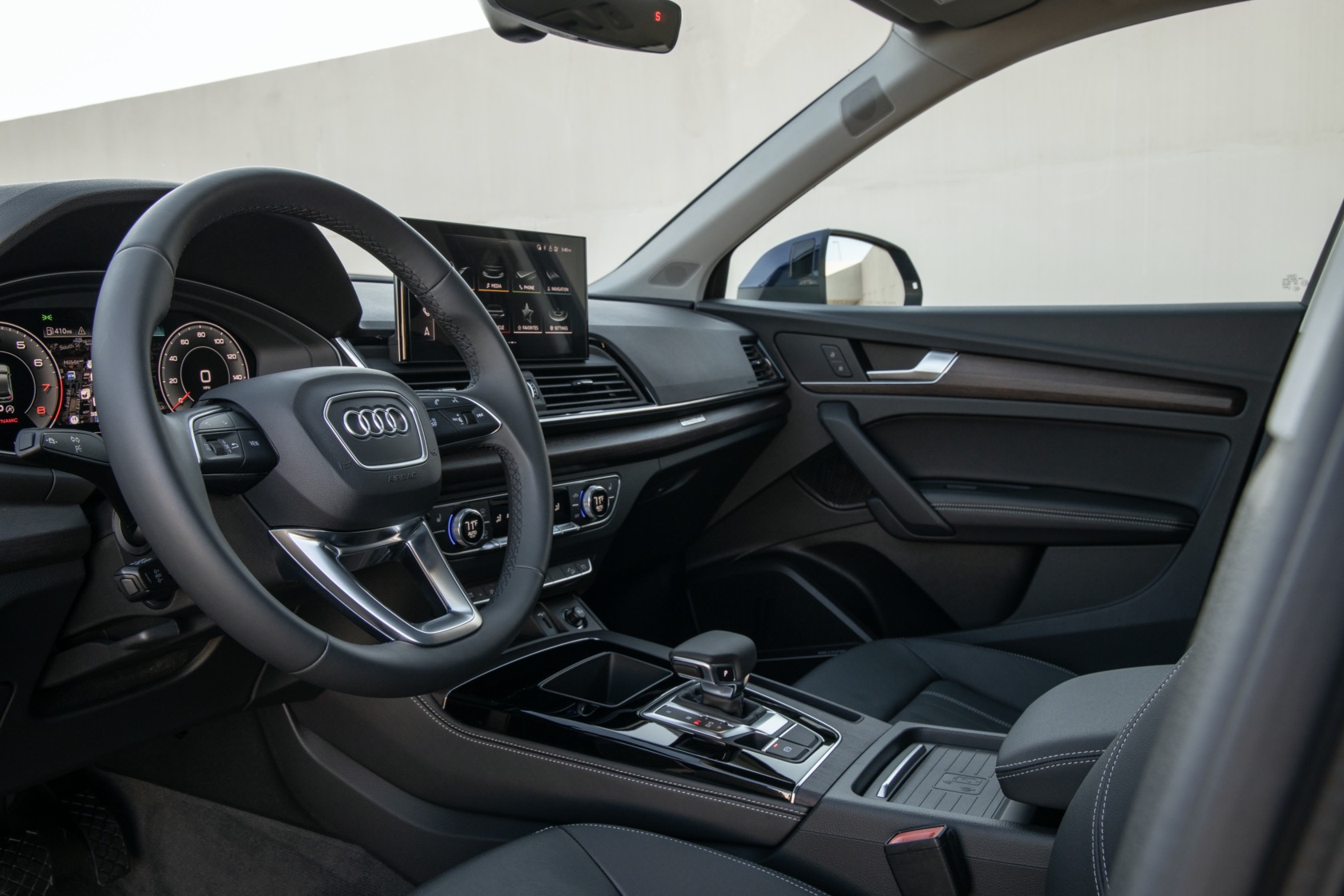 A 10.1-inch touchscreen sits atop the dash, larger and more finger-friendly than its predecessor, and it’s loaded up with MIB 3, the latest iteration of Audi’s infotainment system. That runs faster, and supports wired Android Auto and wireless Apple CarPlay as standard. WiFi hotspot, with LTE Advance Pro and a 5G upgrade in the pipeline, is standard too, as is improved voice recognition with the “Hey Audi” wake word. 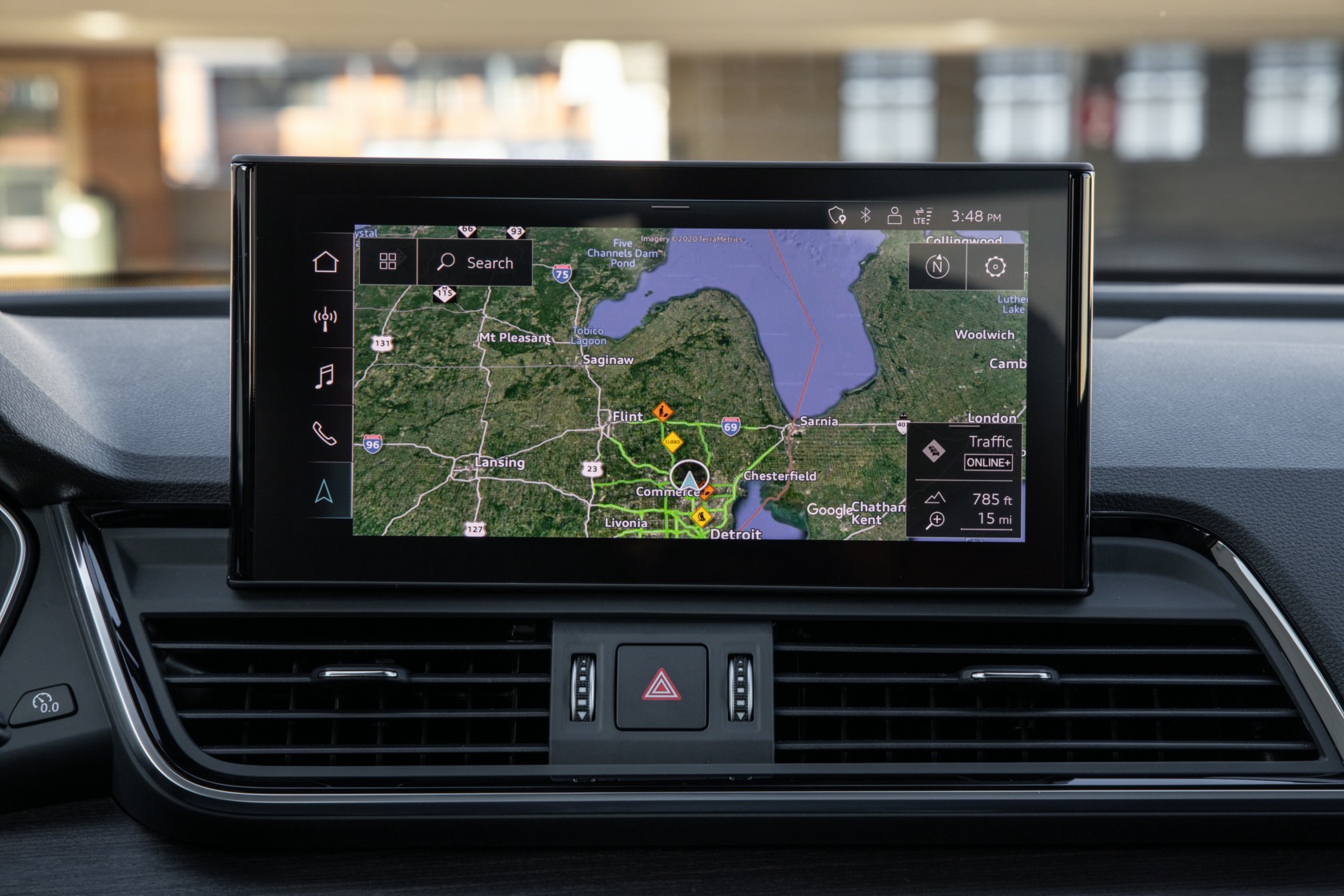 It also adds the new Virtual Cockpit, with a more full-featured Full HD screen versus the 720p panel of the old system. The base car has a smaller, 7-inch display flanked with analog gauges. A full-color head-up display is available, as is a 19-speaker B&O audio system with 755 watts. 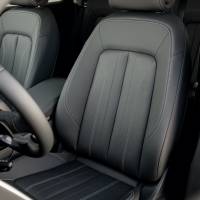 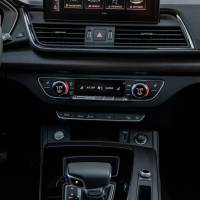 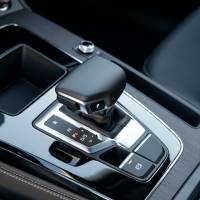 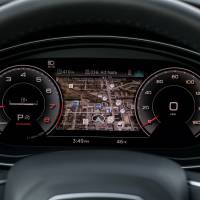 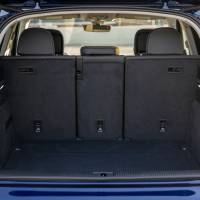 They both come standard on the 2021 Q5 Prestige trim, along with animated headlamps and taillights, dual-pane front side window acoustic glass, heated rear seats, a heated/cooled front cup holder, navigation, parking assistance, a power-adjusted steering column, traffic sign recognition, and ambient interior lighting. For all that, you’re looking at $54,000 plus destination. 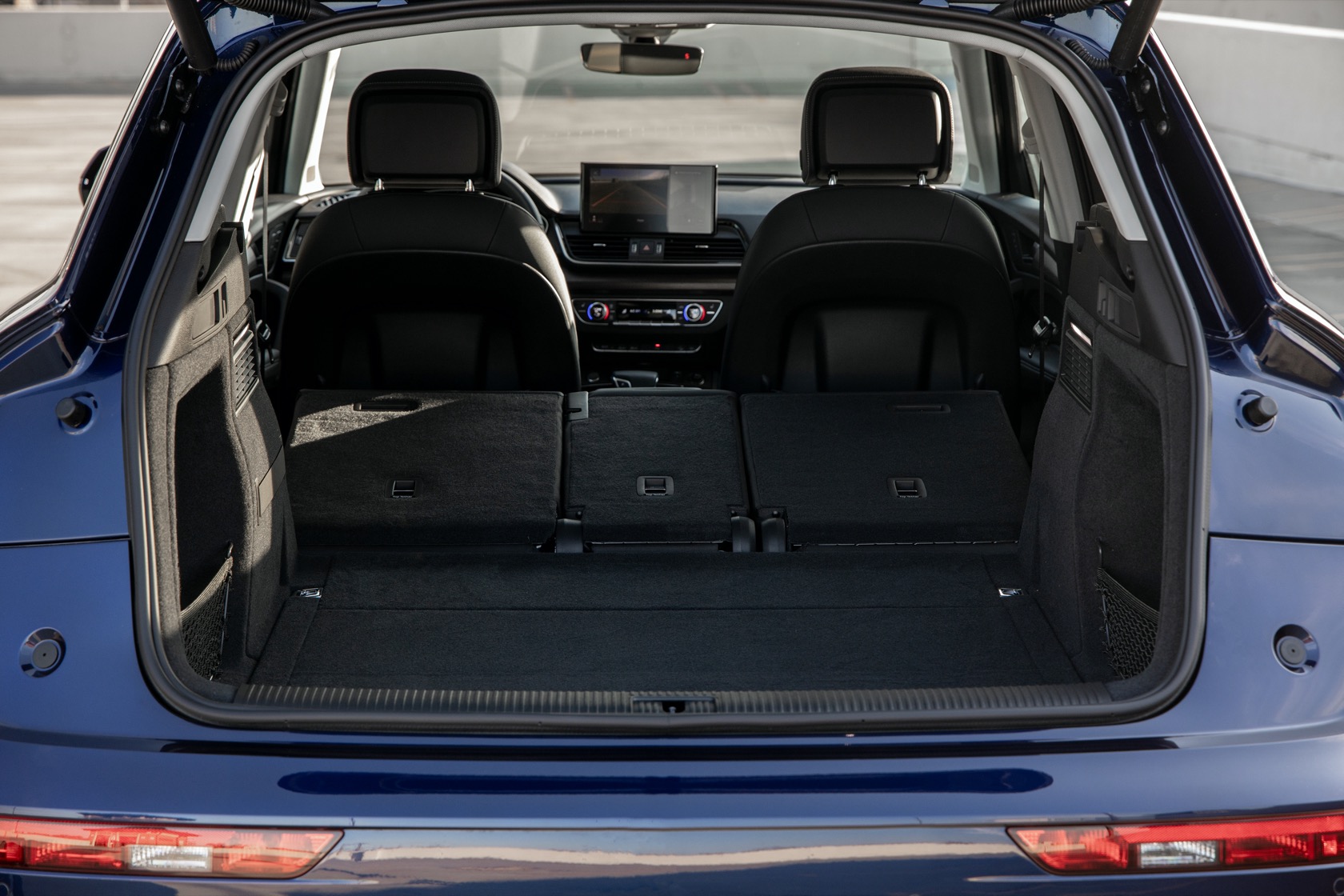 Unsurprisingly, Audi had me in its fanciest Q5 trim. That said, even the Q5 Premium should be a notable step up from last year’s model, the automaker focusing its attentions where they most count. MIB 3 with the bigger touchscreen in particular is much more enjoyable to interact with, even if you’re in the habit of connecting your phone as soon as you get in. 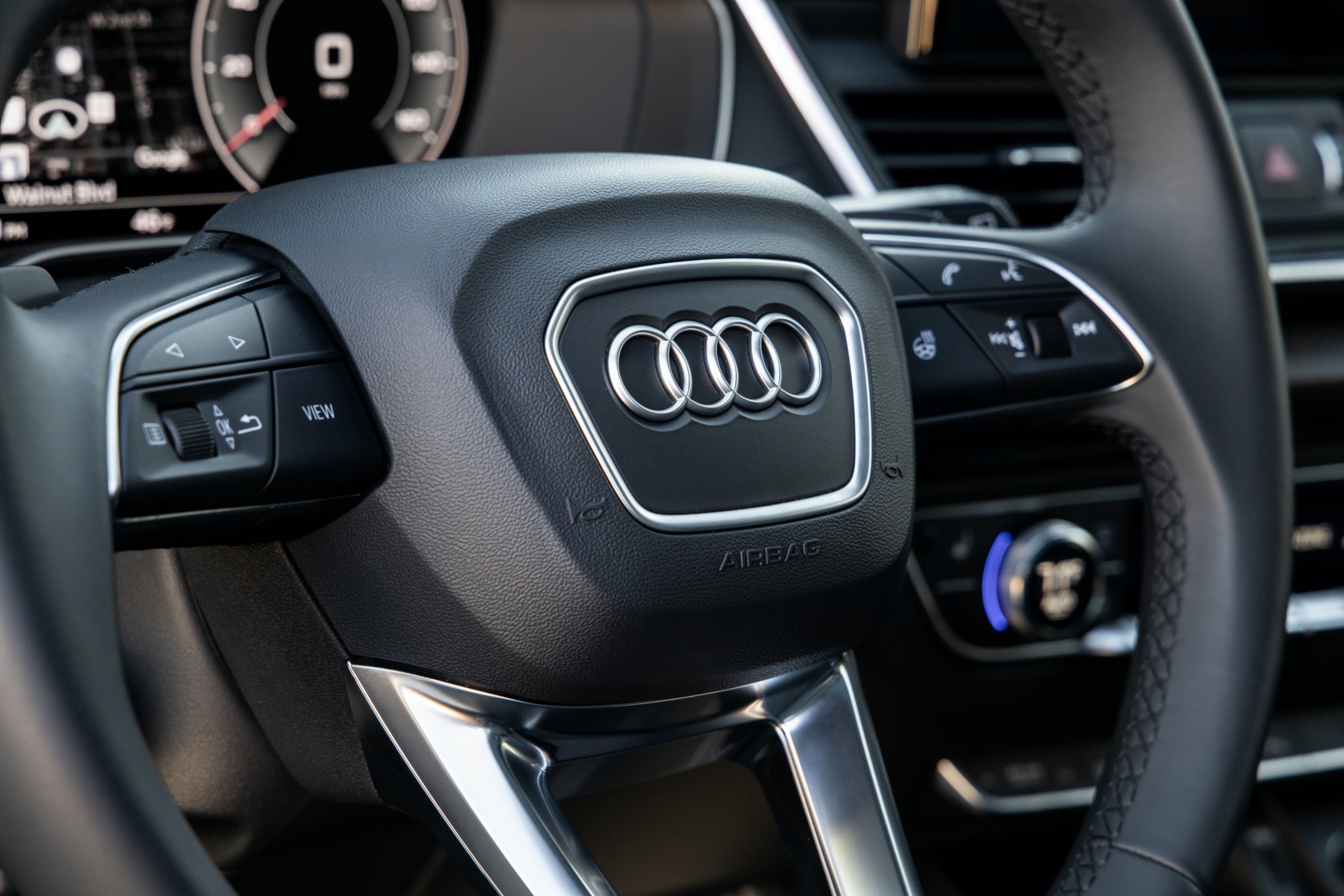 As for practicality, the sliding rear seat allows you to choose between maximizing trunk space or giving adults a little extra legroom. It’s comfortable enough for four adults in all. Maximum cargo space is 25.8 cu-ft with the seats up – more than a Volvo XC60 but less than a BMW X3 – or 54 cu-ft with them down, which is on the smallish side for the segment. 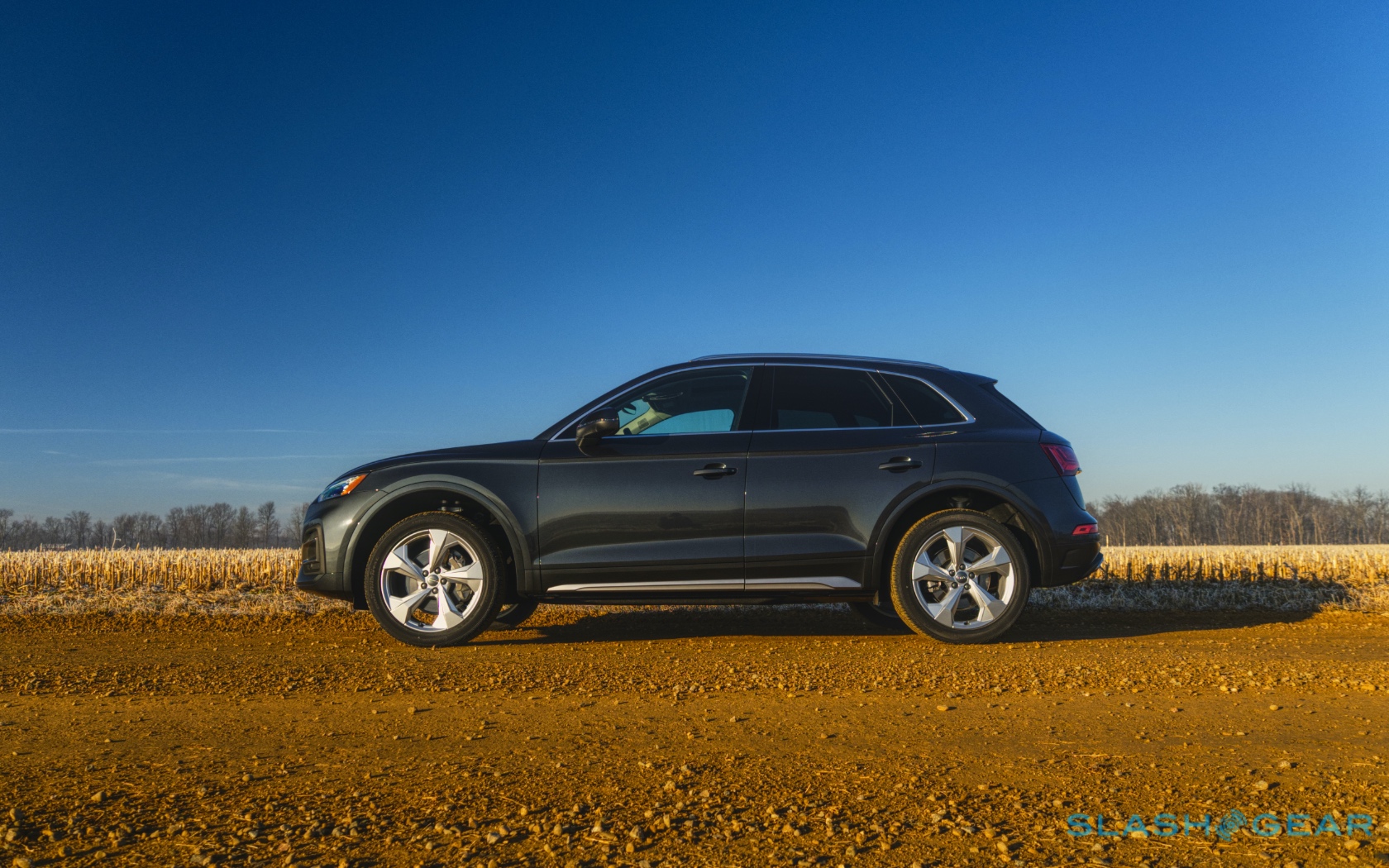 There’s a lot to like about the 2021 Q5. It’s handsome, drives neatly, is flexible and well put-together inside, and the few lingering rough patches on the pre-refresh model have for the most part been addressed. All the same, I can’t help but think that the 2021 Q5 45 TFSI isn’t the one you should buy.

What you probably want is the 2021 Q5 55 TFSI e, the plug-in hybrid version. With more power than the SQ5, and more efficiency than the Q5 45 TFSI, Audi’s PHEV slots neatly into the middle. Better still, since it qualifies for up to $6,712 of federal tax incentives, plus whatever your state might offer on top, it’s actually about the same price as the non-hybrid. Only, with a fully-charged battery, you can get up to 19 miles of pure-electric driving from it. 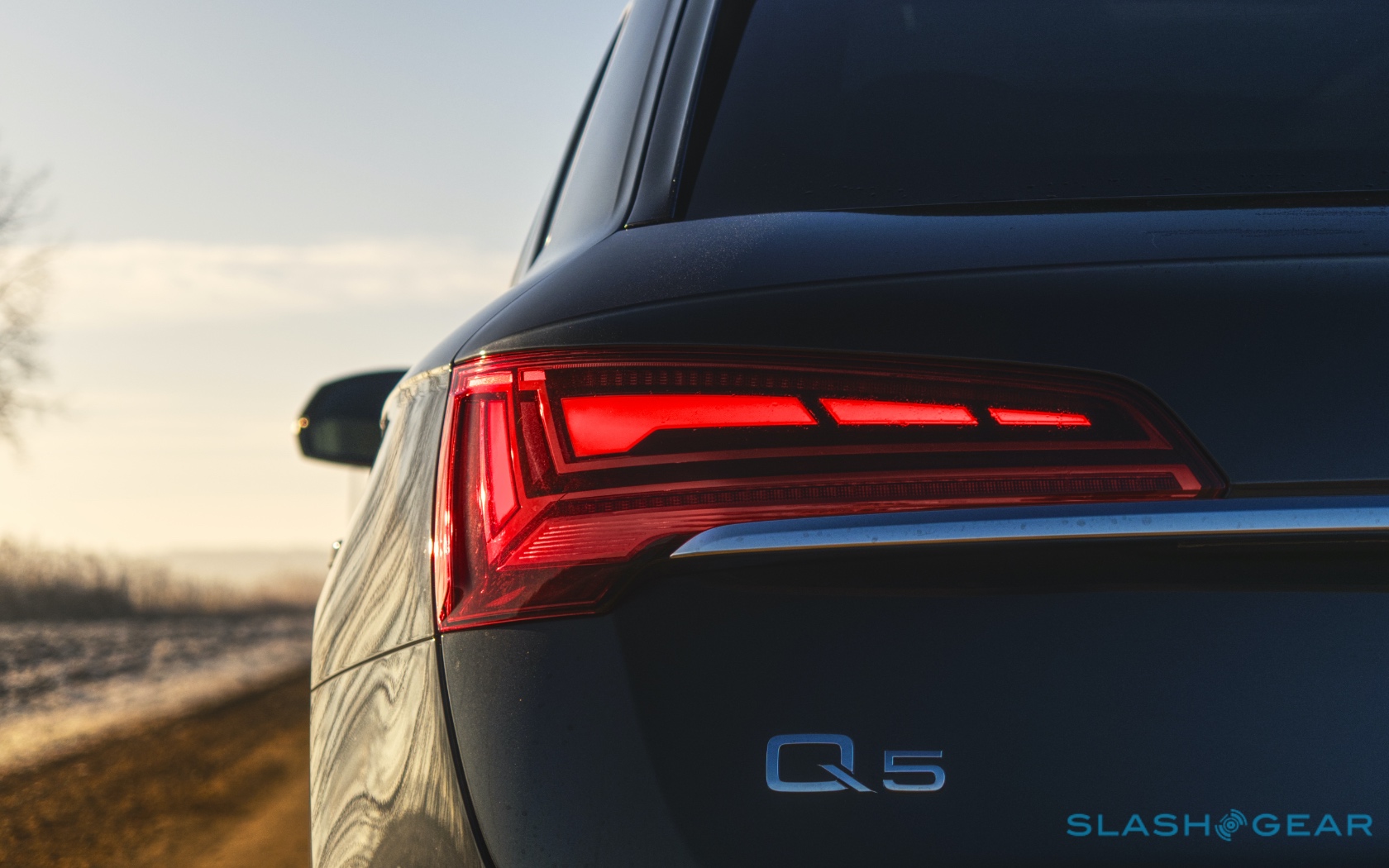 Admittedly, the plug-in hybrid isn’t for everyone. The 2021 Q5 45 TFSI doesn’t feel like a consolation prize in that case, just the sort of progressive refinement we’ve come to expect from Audi. The Q5 has long been the consummate all-rounder when it comes to luxury crossover SUVs, and the 2021 Q5 does nothing to tarnish that reputation.