Audi’s strategy with electrification has been “don’t rock a smooth-sailing boat,” and it’s sticking with that recipe for the 2020 Q5 55 TFSI e. If the e-tron SUV and e-tron Sportback feel much like regular Audi models that just so happen to be all-electric, the Q5 plug-in hybrid sticks even closer to that recipe.

There’s no conspicuous “Hybrid” badging on the outside, no neon green highlights, and no outlandish styling to give the PHEV game away. The eagle-eyed may spot that there’s not only a fuel tank hatch on one side but a second door on the driver’s side for the charging port, but most people will just assume this is a regular Q5. 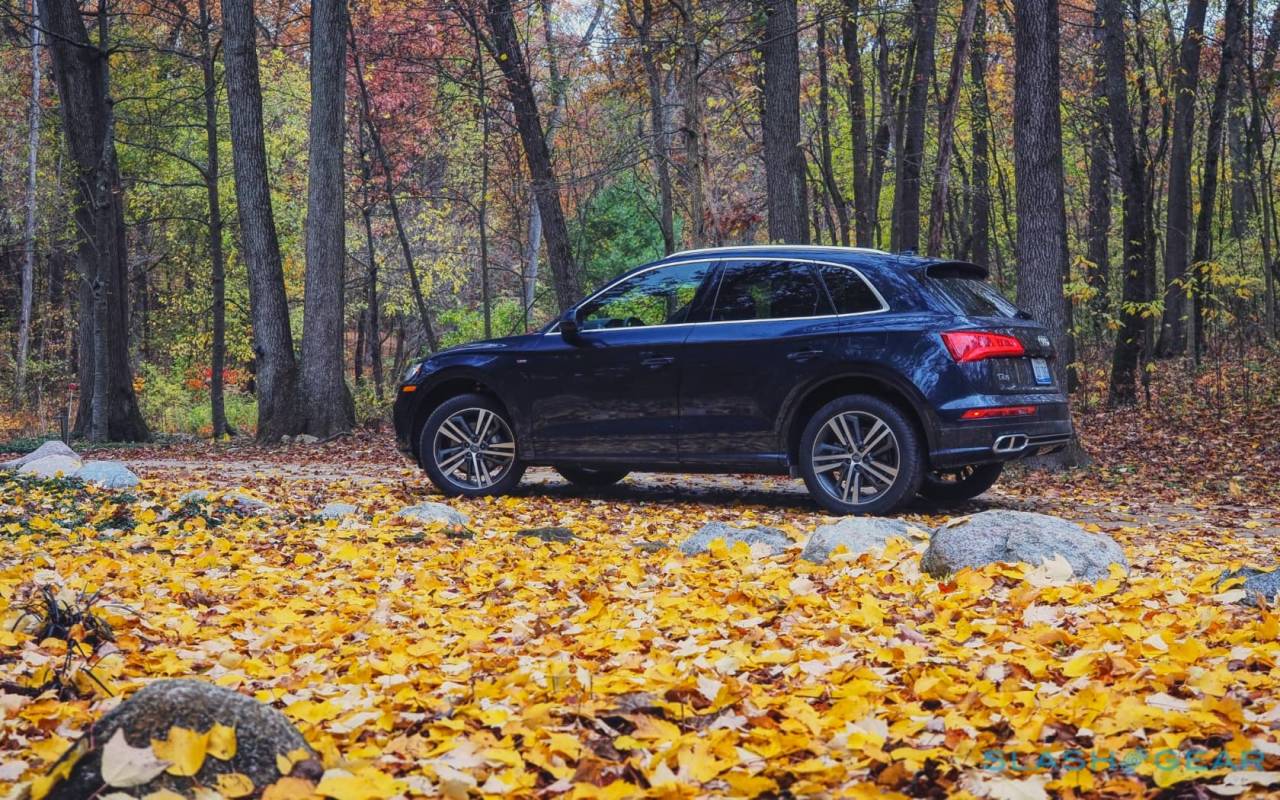 No bad thing. It’s Audi’s volume model, with 1.6 million sales in its first generation, so it’s clearly getting something right. That’s most likely a combination of handsome – but inoffensive – styling, practicality, and a tidy drivetrain. Importantly, then, the conversion to plug-in hybrid doesn’t infringe on any of those three.

For the US, there’s an S line styling package with 20-inch bi-color 5-spoke wheels, upgrading the 19-inch options, along with the rear diffuser from the SQ5. It means a lot of the standard Q5’s exterior chrome is replaced with glossy black. The 14.1 kWh lithium-ion battery is sandwiched under the trunk, but that doesn’t eat into cargo space: you still get 25.1 cu-ft with the split rear bench up, or 53.1 cu-ft with it down. Not the biggest in the Q5’s class, no, but sizable enough and the flat, upright trunk walls and power tailgate err on the practical side too. 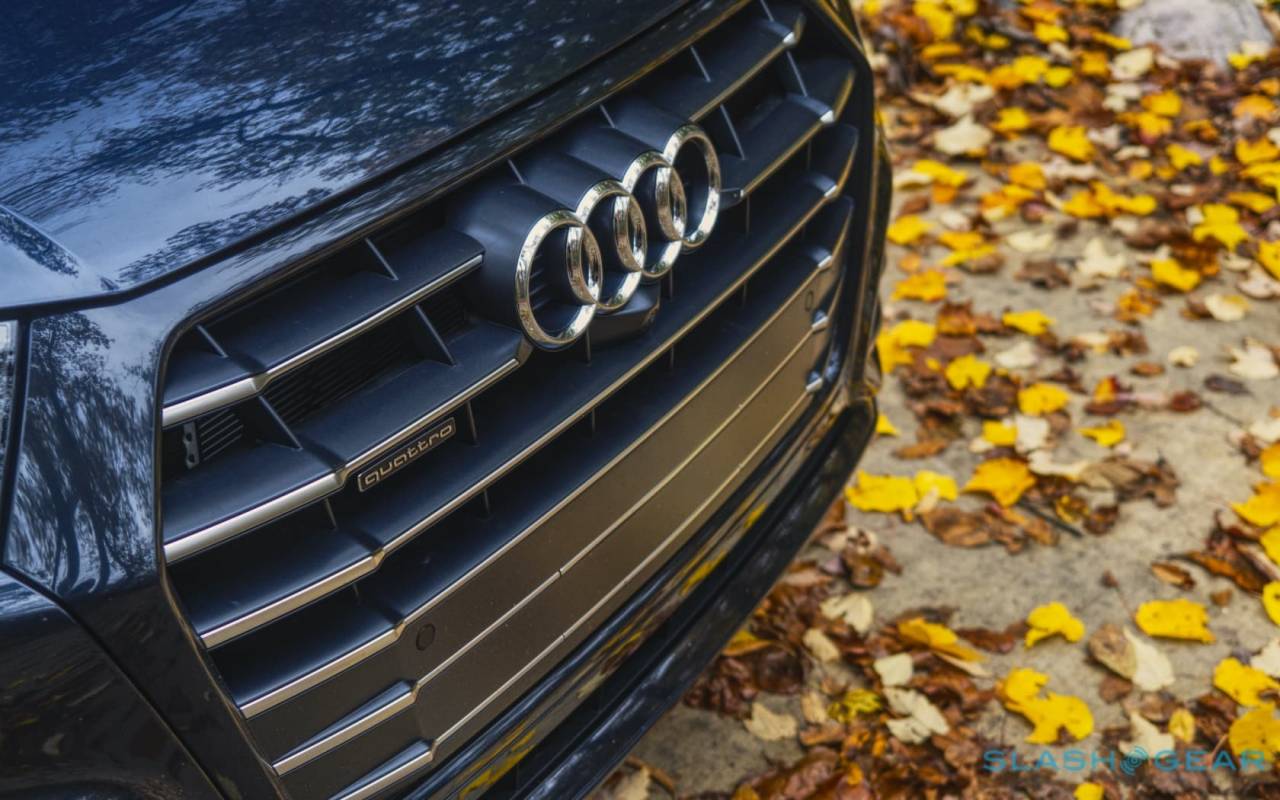 As for the drivetrain, Audi pairs its 2.0-liter TFSI inline-four gas engine with a seven-speed S tronic dual-clutch automatic, sandwiching a single electric motor in-between. It’s the same engine that the regular 2020 Q5 gets, only without the electrification, pushing its power to all four wheels thanks to standard Quattro Ultra.

Altogether you get 362 horsepower and 369 lb-ft of torque. Top speed is 130 mph, though only 85 mph in all-electric mode. The EPA says you’l be able to drive 20 miles on electric power alone, the Q5 PHEV starting up in EV mode by default. Alongside the familiar Drive Select drive mode buttons there’s a new EV button which toggles between EV-only, Hybrid mode, and a battery-save mode that saves the li-ion’s charge for later. 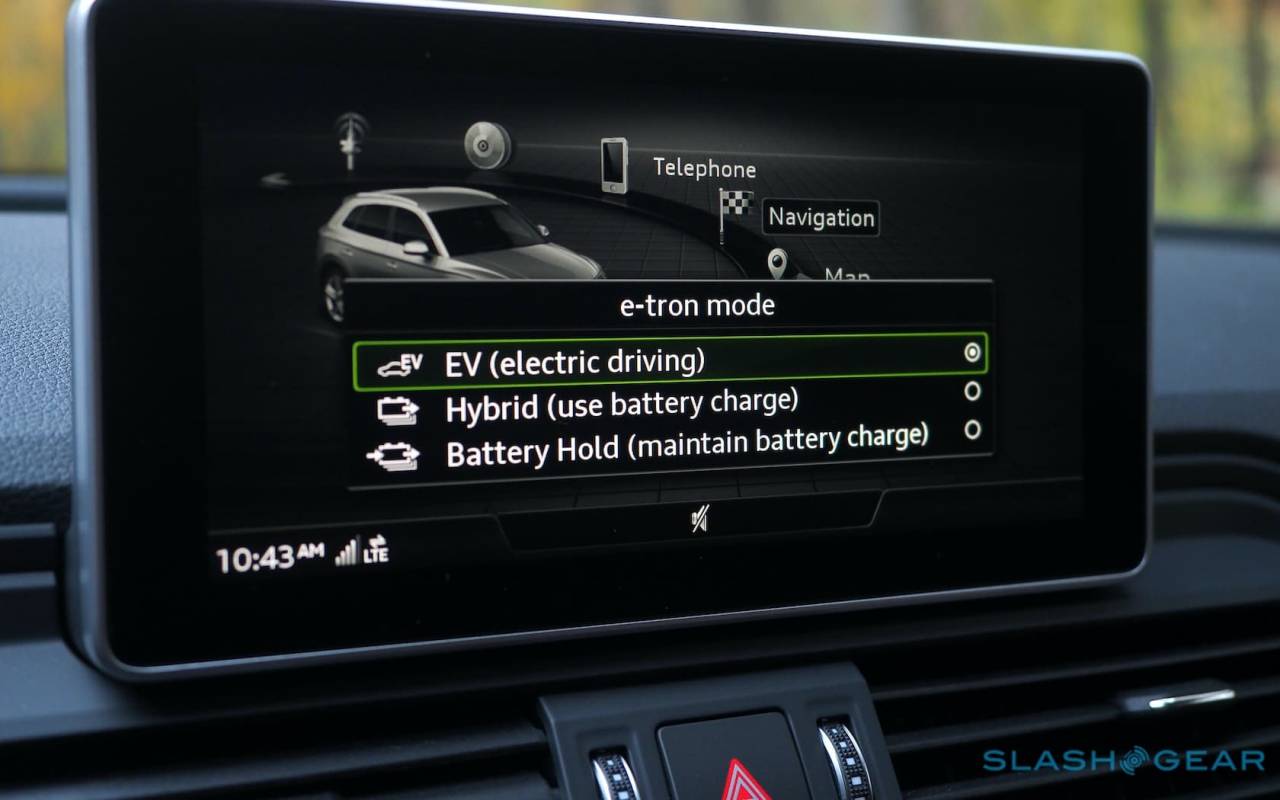 Like you’d expect, there’s regenerative braking to top up that charge as you slow, though don’t expect one-pedal driving. Instead, the Q5 hybrid feels much more like its gas-only brethren, and there’s no way to crank up the regen levels so it slows faster when you lift off the accelerator. You’ll be prompted to do that with a little green foot icon, when the Audi spots you’re headed into a slower speed zone; it can also disengage drive to the rear wheels when you’re cruising, for greater efficiency.

They’re features borrowed from the regular Q5, though, and I was surprised not to see more hybrid-specific options. You can’t, for example, actively charge the battery from the engine as some other PHEVs offer. For that, you’ll need the 7.7 kW onboard charger; unlike the e-tron SUV, there’s no DC fast charger support. Figure on about six hours to recharge on a regular US outlet, or a third of that if you have a Level 2 charger (and, frankly, PHEV drivers really should). 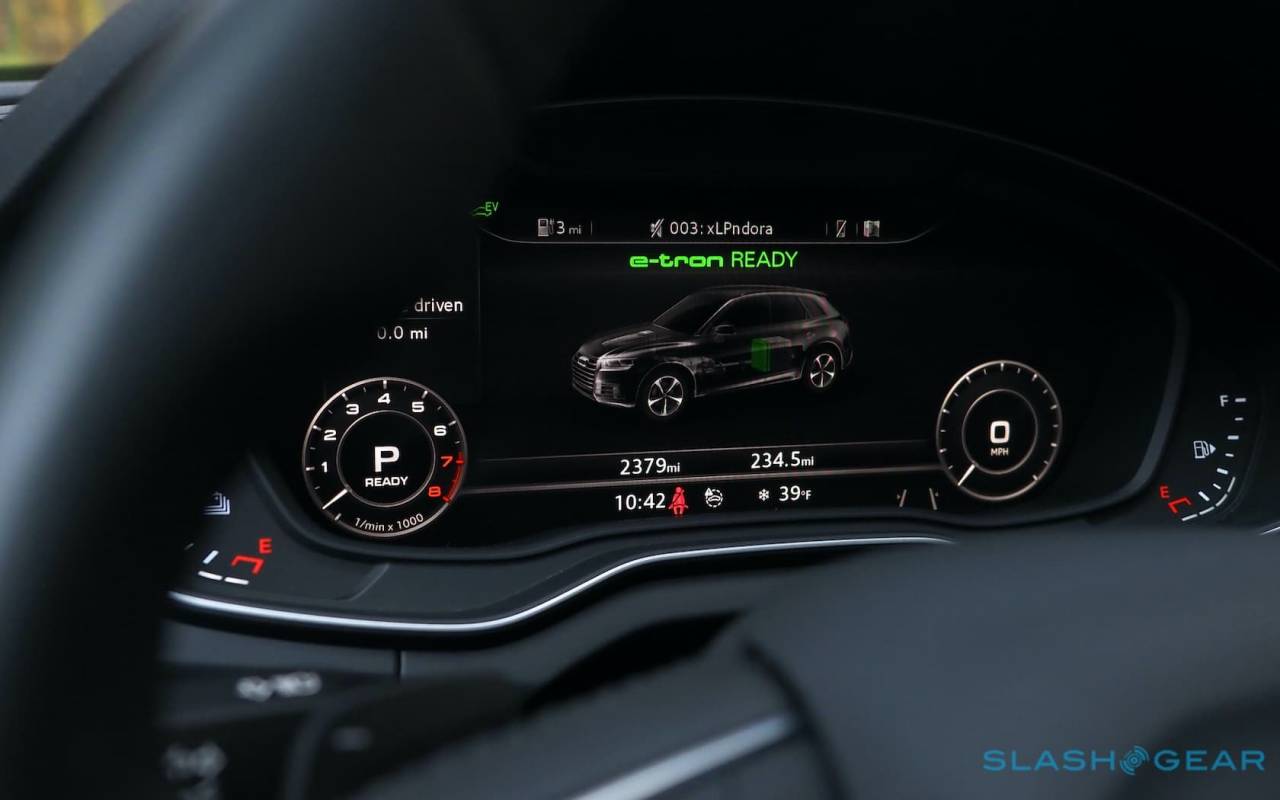 With more horsepower than the 2020 SQ5, this hybrid is actually the most powerful in the range. Its 0-60 mph time cuts 0.1 seconds off that of the SQ5, then, and almost a full second off the regular Q5.

You notice it most in urban driving, the surge of electric torque turning the Q5 PHEV into a dart-and-dash rocket. Gaps in traffic are easily exploited, the Audi nimbly leaping away from stop signs and traffic signals. It helps with highway-speed overtaking, too, though at that point the gas engine has usually been roped in to help. You need a light foot on the accelerator to keep the Q5 in EV mode. 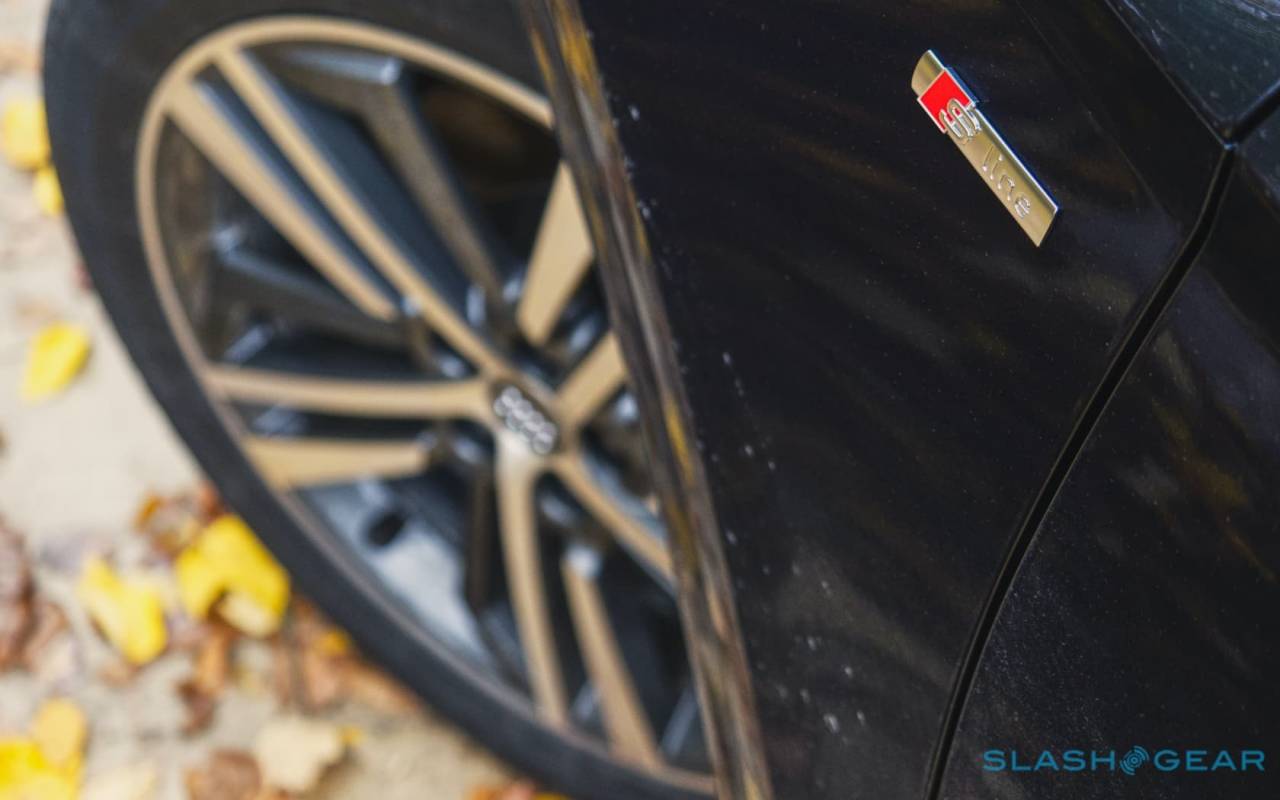 The transition isn’t seamless aurally, but there’s no unpleasant jolt and judder when the gas starts up. Come the corners, though, the extra curb weight of the hybrid plays a bigger role. At 4,665 pounds it’s more than 300 pounds heavier than the SQ5 with its six-cylinder engine, and more than 600 pounds more than the regular Q5.

Audi’s suspension tuning is good, but there’s only so much you can do with physics. Things are generally composed, but push harder and there’s the inevitable lean that gives way to understeer. Not far, in fact, from how the regular Q5 performs, and a reminder that there’s more than just power to make an SQ5 special. 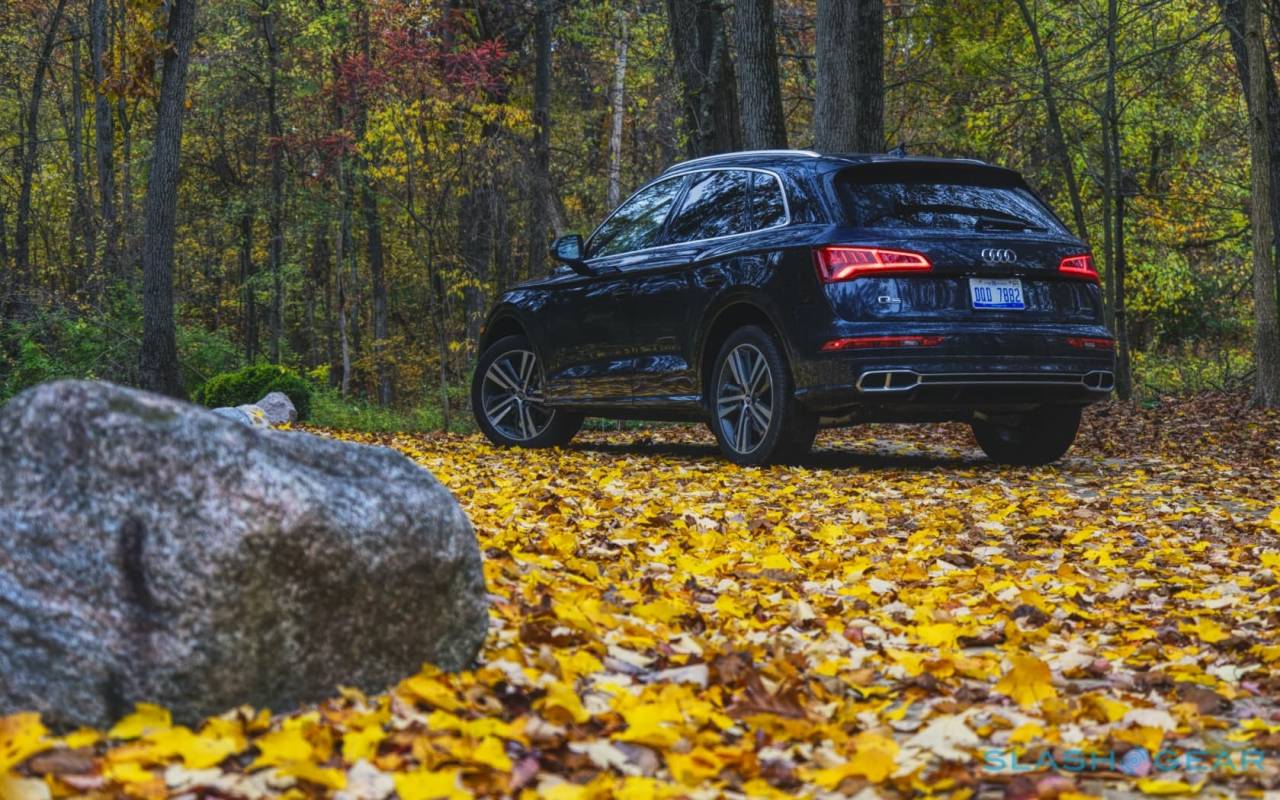 Though the 2020 Q5 PHEV may be new to the US market, it’s based on a very familiar car. There’s a new, 2021 Q5 midsize crossover on the way, launching in the US from the end of this year in fact, but this current plug-in hybrid is based on the old version. That means there are some compromises to be made. 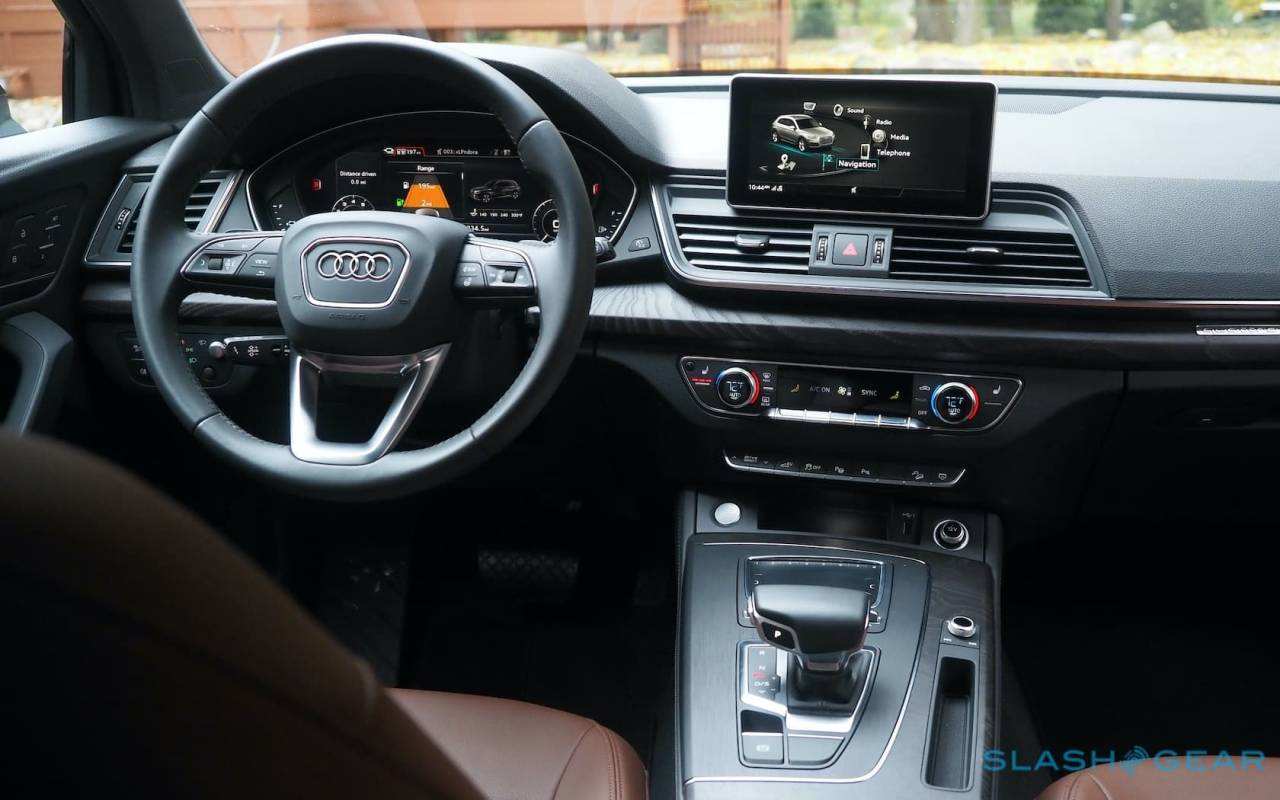 Most conspicuous of those is the cabin, and the infotainment system in particular. The 2021 Q5 has a 10.1-inch touchscreen with Audi’s latest MIB 3 software, but the 2020 Q5 makes do with the old version. That has a much smaller, non-touch 8.3-inch display that you navigate via a touchpad and rotary controller in the center console.

There’s Android Auto and Apple CarPlay, but they’re wired: 2021’s car will add wireless support. More significant is just how much easier MIB 3 is to use, with the Q5’s older menus more fussy and laborious to page through. Everything is there, it just takes a little more effort to find it, especially while you’re on the move. 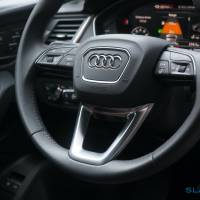 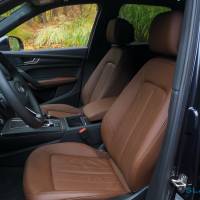 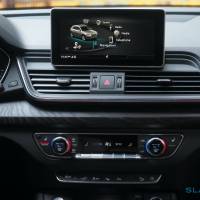 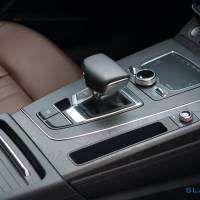 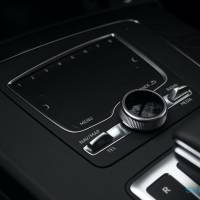 Better is the virtual cockpit, Audi’s digital instrumentation. That has special PHEV gauges, showing individual range remaining for the gas and electric parts of the drivetrain, and a simple graphic showing what’s powering what at any time. As we saw from the e-tron, Audi errs on the minimalist side when it comes to EV data dumps, but that’s probably what Q5 PHEV buyers are wanting anyway.

The rest of the cabin is what we’ve come to expect from Audi, and from the Q5 specifically. Comfortable space for four adults – the middle rear seat best saved for kids – and plenty of headroom. Audi offers Premium, Premium Plus, and Prestige trims, all with leather seats, metal and wood trim, heated front seats, a power tailgate, and navigation. This Prestige model adds a Bang & Olufsen audio system, panoramic sunroof, 360-degree camera, adaptive cruise control with lane-assistance, a head-up display, and dual-pane acoustic glass for the front side windows. An available cold weather package ($800) throws in a heated steering wheel and heated rear seats, to go with the standard three-zone climate control. 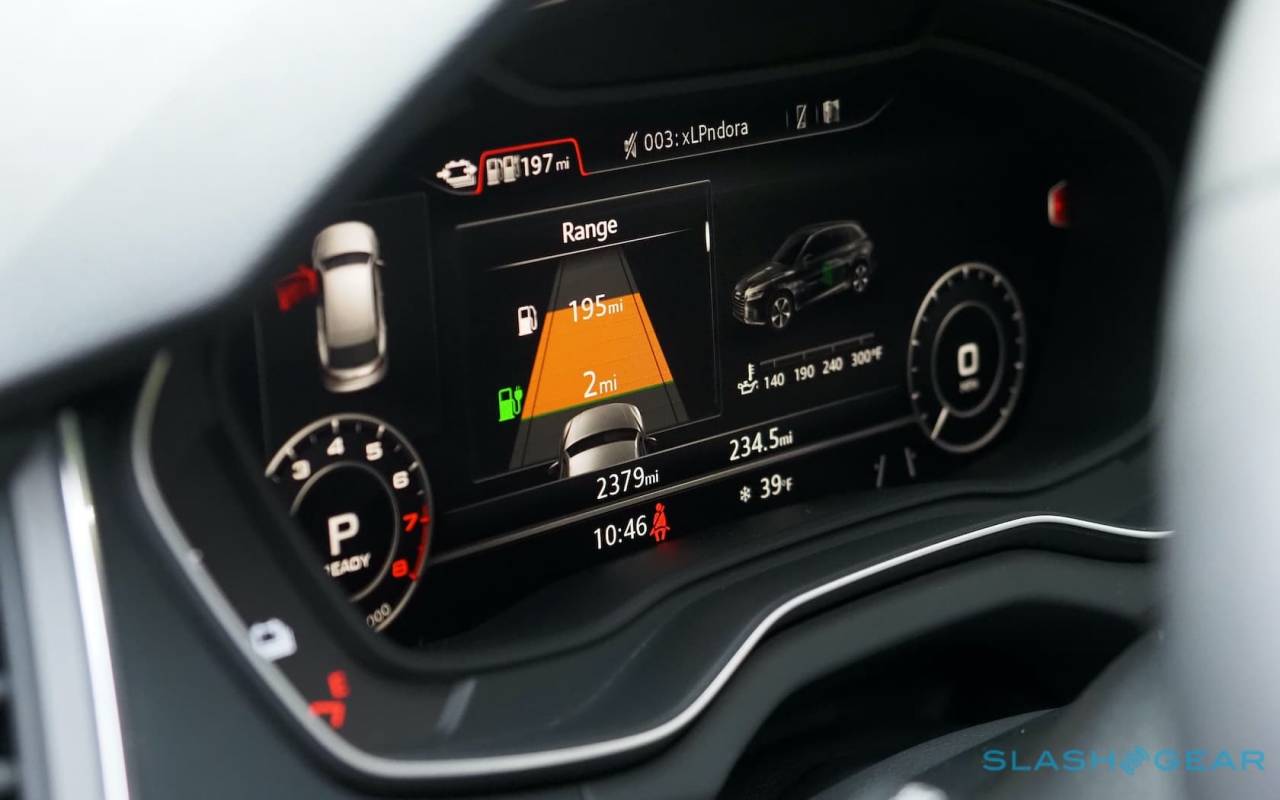 You pay a premium for the hybrid, then, but Audi has an argument there too. Since the PHEV is eligible for up to $6,712 of the federal tax incentive for EVs, that actually brings the Q5 55 TFSI e within spitting-distance of its non-electrified sibling. State and local incentives could sweeten that deal even more. 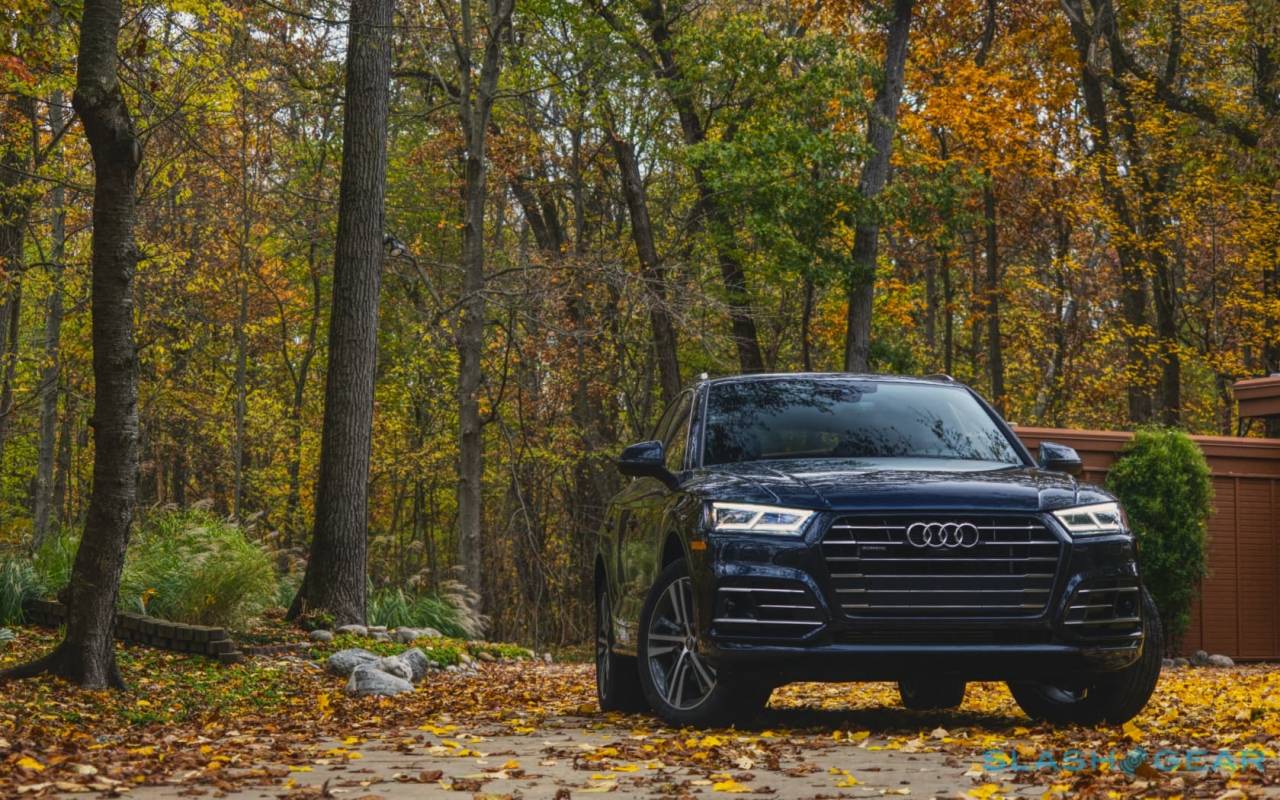 That – plus the extra power to play with – makes for a compelling argument, particularly if you’re tempted by the electric lifestyle but can’t quite give up on the reassurance of gas’ ready availability. It drives like a Q5 but perkier, you don’t sacrifice the practicality that owners love, and while 20 miles of EV range is hardly lavish, it’s enough for urban errands while also adding that jolt of torque on longer drives.

Indeed, the only thing that would hold me back is the 2021 Q5 55 TFSI e, the plug-in hybrid version of the revamped Q5. That’s expected to arrive in US dealerships by the end of the year, and land at around the same price as the 2020 model. However you get the much-improved infotainment system, something I think is absolutely worth waiting for. That, paired with the lack of compromise on what makes the Q5 so popular, should leave the new crossover a no-brainer for those wanting a first step into everyday electrification.