I might not, had it been my $108,050, have opted for the bright Lava Orange paintwork on the 2020 Porsche Cayenne S Coupe. Some cars require help standing out, while others get all the attention they need without resorting to eyeball-searing trickery. Porsche’s more shapely SUV falls firmly into the latter category.

Lava Orange is the most vibrant of the color options Porsche offers for the Cayenne S Coupe, and you pay $3,150 for it alone. That’s almost the premium Porsche charges to go from the standard SUV version of the car to this four-door-coupe, the starting price of which is $88,600 (plus $1,350 destination). 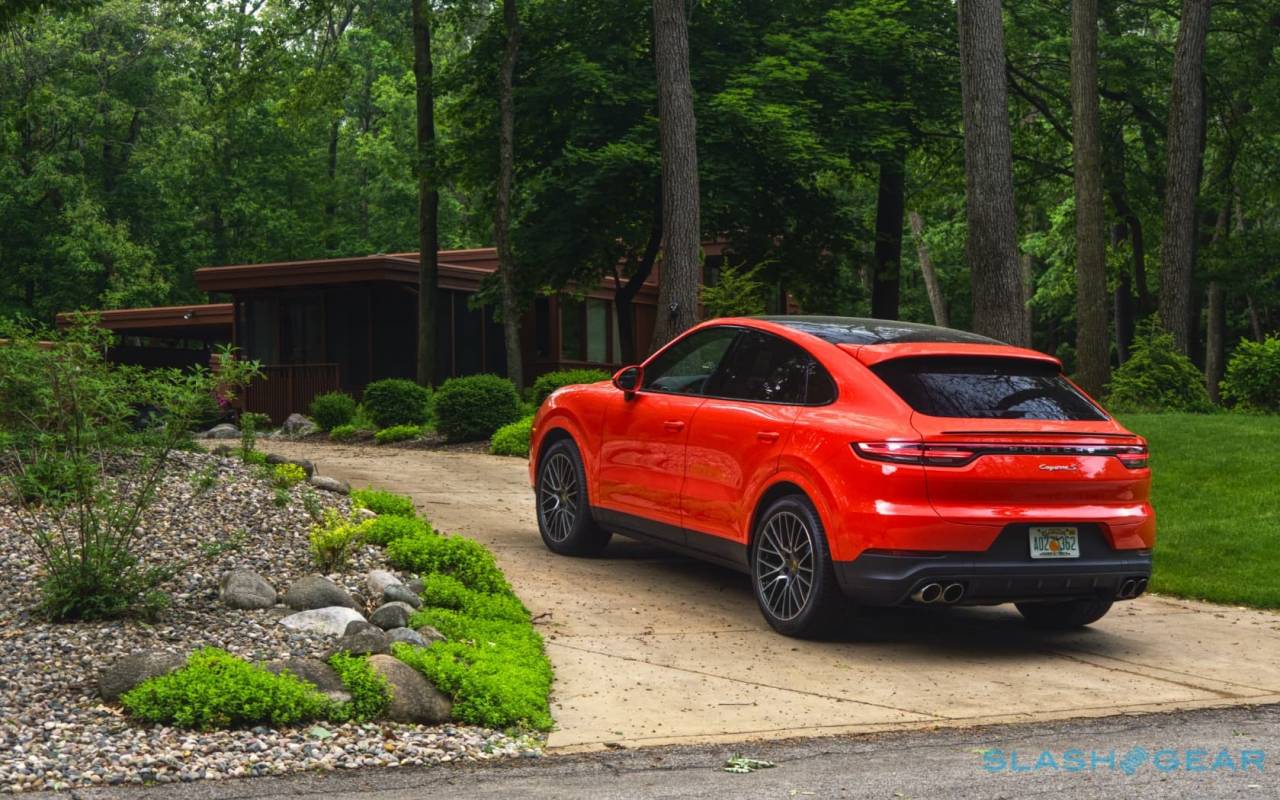 The aesthetic pros and cons of the roofline come down to personal taste. Otherwise, most of the detailing is the same, including the trunk-spanning LED light bar which Porsche has used to great effect across most of its current range, and the quad-lamp front clusters. Picking the Coupe drops the roofline by 20mm and widens the rear by 18mm; you also get a pop-out rear spoiler that emerges at speeds over 56 mph.

Also the same is Porsche’s excellent 2.9-liter twin-turbo V6, here tuned for 434 horsepower and 405 lb-ft of torque. Eight-cylinder addicts may scoff – and head for the significantly more powerful (and expensive) Cayenne Turbo Coupe – but the V6 is never short of get-up-and-go, and it sounds the part too. Peak torque arrives from 1,800 rpm, and the 8-speed Tiptronic S gearbox is eager to downshift. 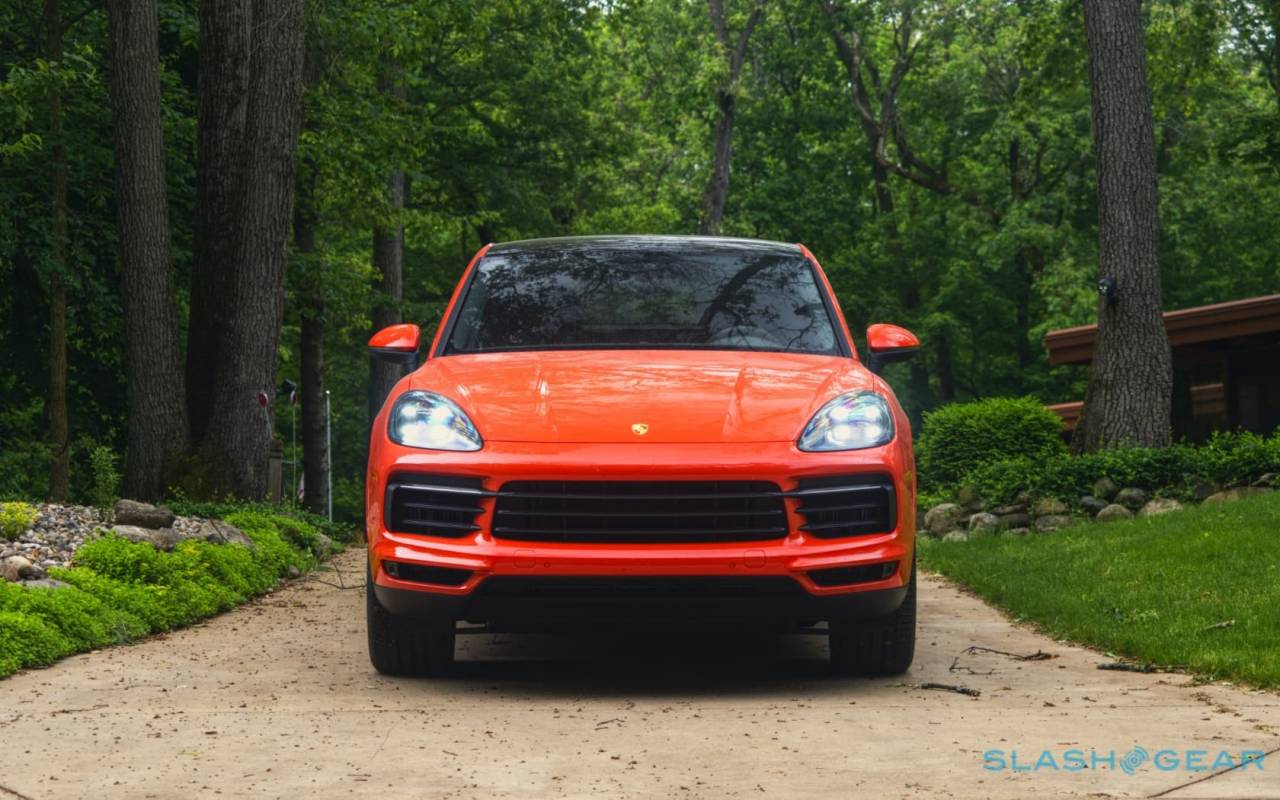 All Cayenne Coupe models get the Sport Chrono pack as standard, with the handy drive mode knob on the steering wheel – with Normal, Sport, Sport+, and customizable Individual modes, along with a center button that maxes out the settings for a 20 second surge – and a 0-60 mph time of 4.7 seconds. You can knock that down a tenth of a second with the Lightweight Sport Pack, though that’s a $14k addition. Top speed is 163 mph.

With its reputation as one of the best-handling SUVs on the block, you slide behind the Cayenne’s wheel with high expectations. Impressively, it delivers on them. Among the options nudging the price into six digits are the $2,170 Adaptive Air Suspension (PASM) system, $3,590 Dynamic Chassis Control (PDCC), and $1,500 Torque Vectoring Plus (PTV+). 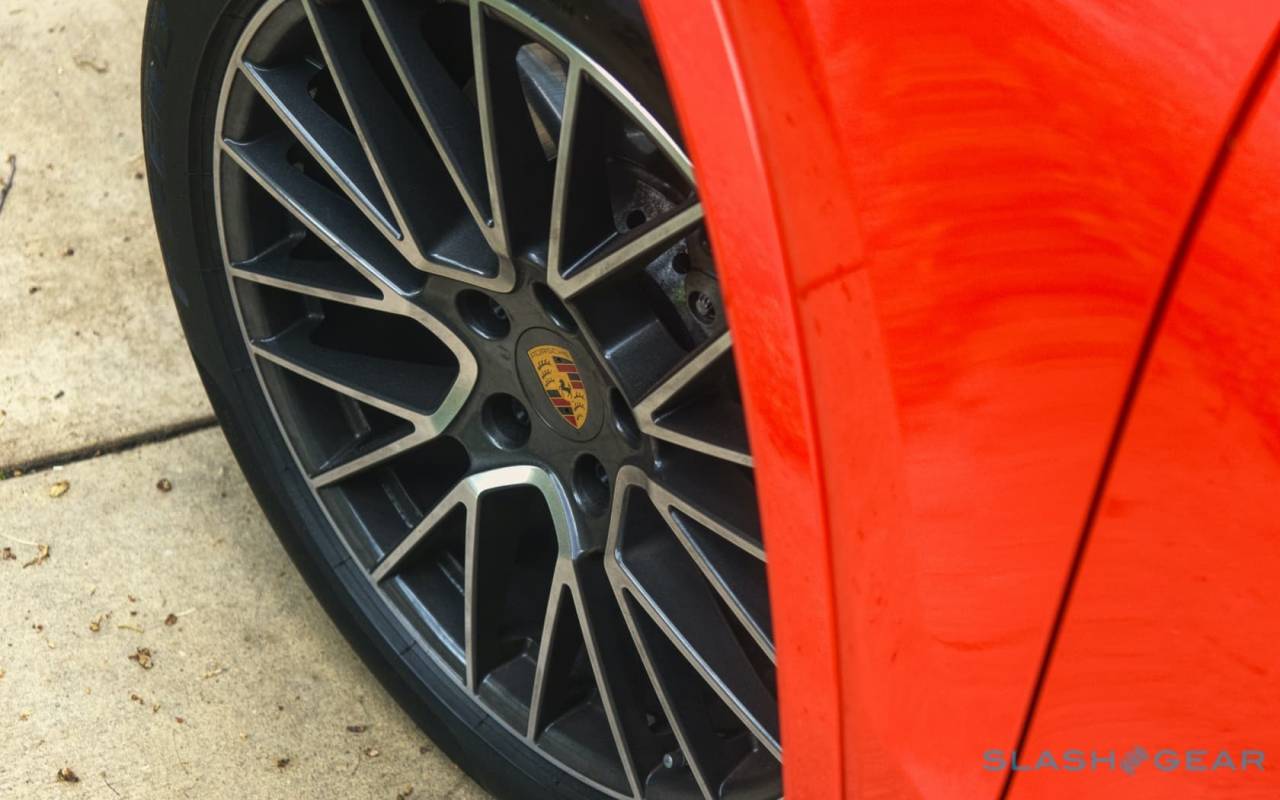 They collectively conspire to hide much of the 4,725 pound curb weight, keeping it astonishingly flat in corners and shifting the V6’s power front to rear and side to side courtesy of its permanent all-wheel drive. Porsche favors a rear-wheel bias, but the Cayenne funnels its torque where necessary to ensure as much grip as mechanically possible. That pays dividends when you’re pushing hard, but the same systems leave the Cayenne S Coupe feeling comfortable and sure-footed even over ill-maintained asphalt.

I struggle to imagine too many Cayenne S Coupe owners taking their tricked-out SUV off-road – particularly if it’s shod in $2,710 21-inch RS Spyder Design wheels with their skinny rubber – but that doesn’t mean it can’t deal with rougher stuff. There are settings for gravel, mud, sand, and rocks, along with the ability to raise the chassis height for maximum ground clearance. The 7,700 pound towing capacity is the same as for the SUV body, too. 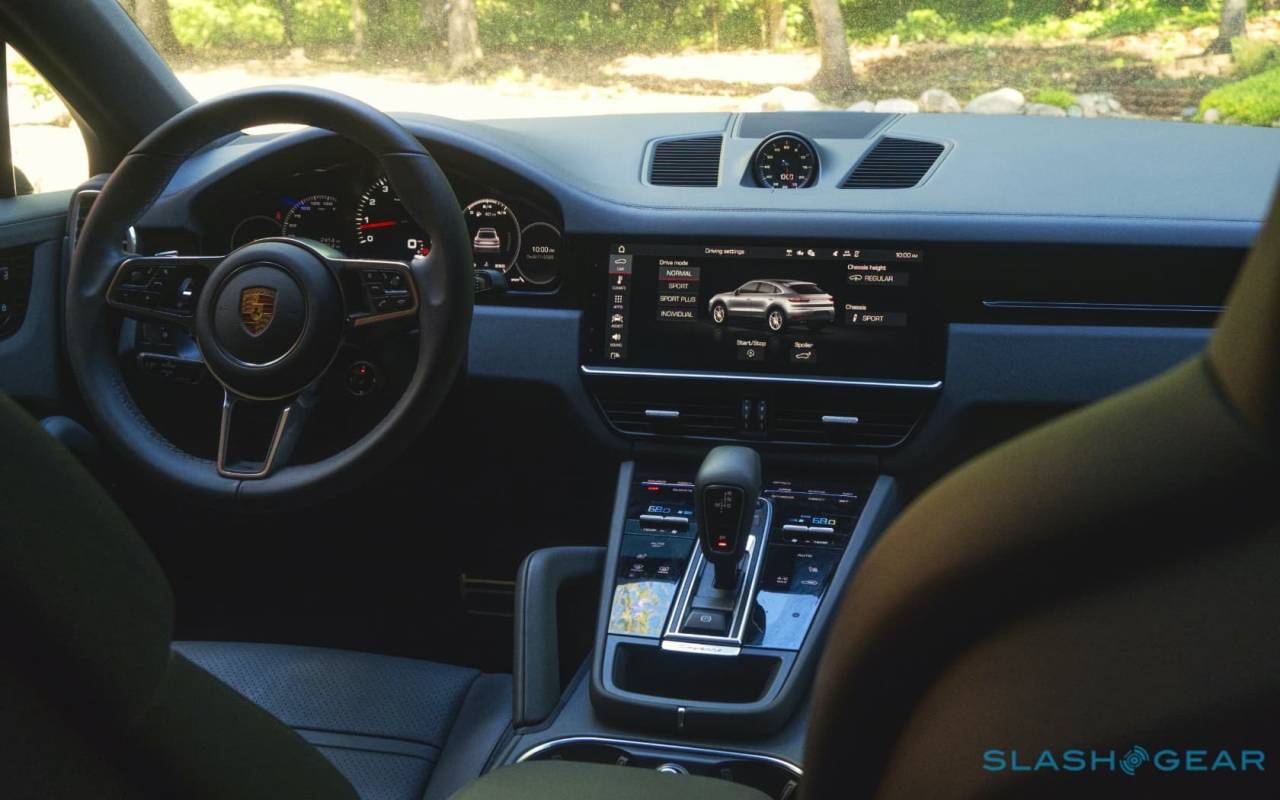 You access those mode settings through Porsche’s 12.3-inch center touchscreen, which runs Porsche Communication Management (PCM). It looks complex at first, but once you’ve spent a few minutes adjusting the customizable home screen widgets things all fall into place. It’s fast and responsive, too, and cleverly hides much of the detail from the interface until your hand approaches.

Apple CarPlay is included – though not Android Auto – and there are still plenty of buttons and switches for the HVAC system, suspension, and other settings. The glossy black center console can be a fingerprint magnet, though, as a result. Behind the wheel there’s a big analog tach flanked by two driver-configurable screens.

Quad-zone climate control is standard, as is leather trim, but my test car came with the $3,750 extended leather interior package. Either way you get the same 8-way adjustable Sport Seats, which are supportive and nicely bolstered; Porsche will sell you its Comfort Seats or Sport Seats Plus for $1,290 or $1,710 respectively. The panoramic glass roof helps with cabin brightness, though it’s still a fairly dark place; were it my money, I’d have gone for some of the lighter leather options, rather than this sober slate gray.

In the back, slightly lower seats – with space for two or three – help offset the sloping roofline and maintain decent headroom for adults. Trunk capacity is down too, unsurprisingly, at 22 cubic feet with the rear seats up, or 53.3 cu-ft with them down. That’s 5-7 cu-ft less than in the regular SUV, but you’ll only really notice the difference with taller items. 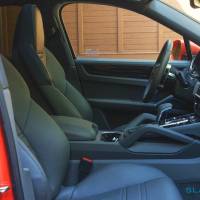 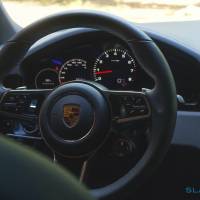 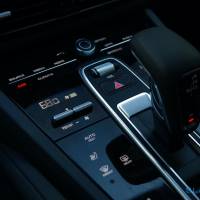 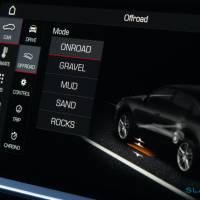 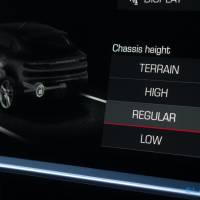 What I did notice, though, was the absence of some safety features you’d really expect to be standard on a luxury car. A 360-degree camera is $1,200 more, and would definitely help with the limited rear visibility. Blind-spot warnings are $950; I did a double-take when I realized they were missing. I can understand Porsche charging extra for things like adaptive cruise control with lane-keeping, but some of what’s on the options list really do feel like they ought to be table-stakes for something in the Cayenne S Coupe’s class.

Perhaps Porsche owners are so familiar with that pricing strategy, digging a little deeper into their pockets doesn’t seem out of place. Maybe they’re just so enchanted with how the Cayenne S Coupe drives that they don’t mind the way the add-ons spiral. I can totally understand that, and indeed being willing to accept the 19 mpg combined economy figure, attainable only if you show uncharacteristic restraint. 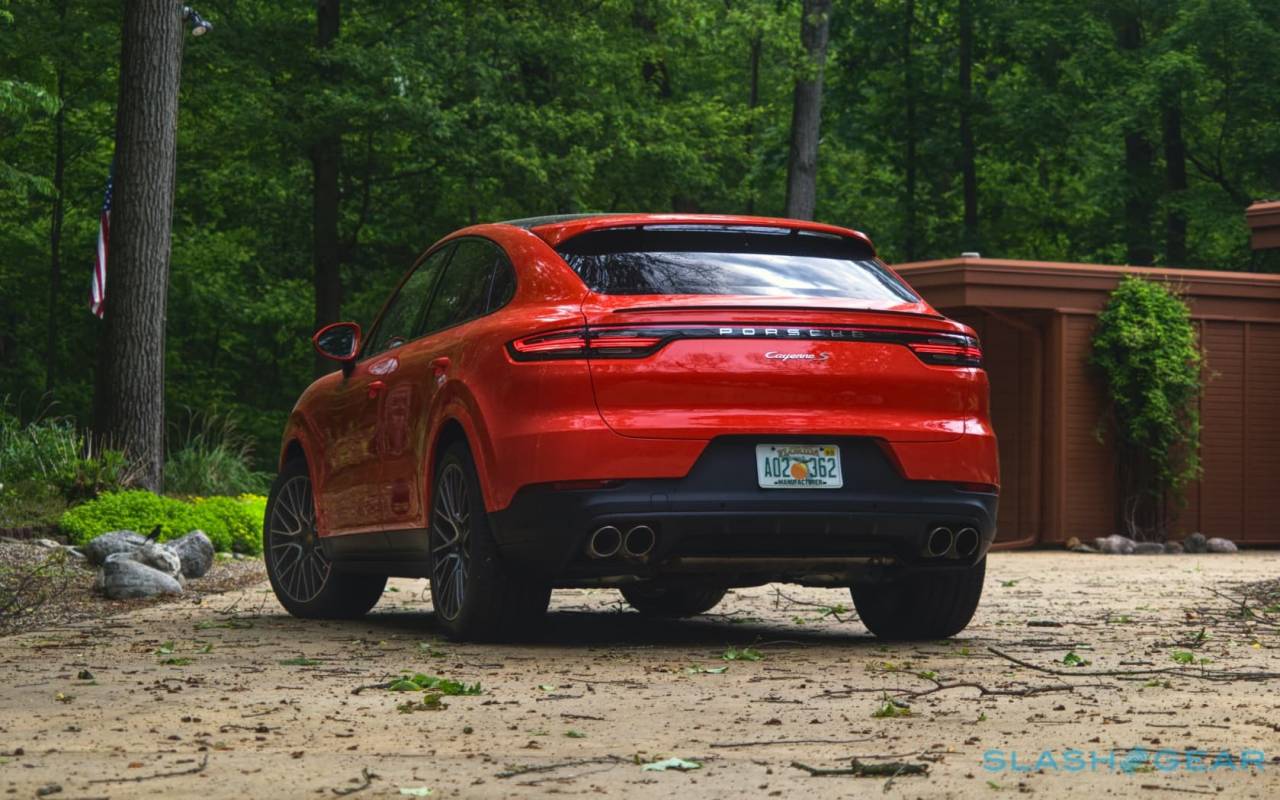 What lingers, likely long after the sting of the sticker price fades, is just how little compromise is involved for eager drivers forced to opt for a car that’s family-friendly. It’s easy to imagine living with the 2020 Cayenne S Coupe, where the capabilities far outweigh any compromises. Forget the bright orange paint job: this Porsche gets a glowing report regardless.