BMW has revealed the 2020 BMW X6, and if you like your SUVs to have a coupe-like roofline and up to 523 horsepower, you’re in luck. The crossover that BMW insists is actually a category-creating Sports Activity Coupe (SAC) gets bolder styling, a fancier interior, and a new illuminated grille.

It may not seem like it, but it’s been more than a decade since BMW launched the first-generation X6. Since then – and with two generations under its belt – the Sports Activity Coupe has sold more than 443,000 units around the world. Now it’s time for the third-generation. 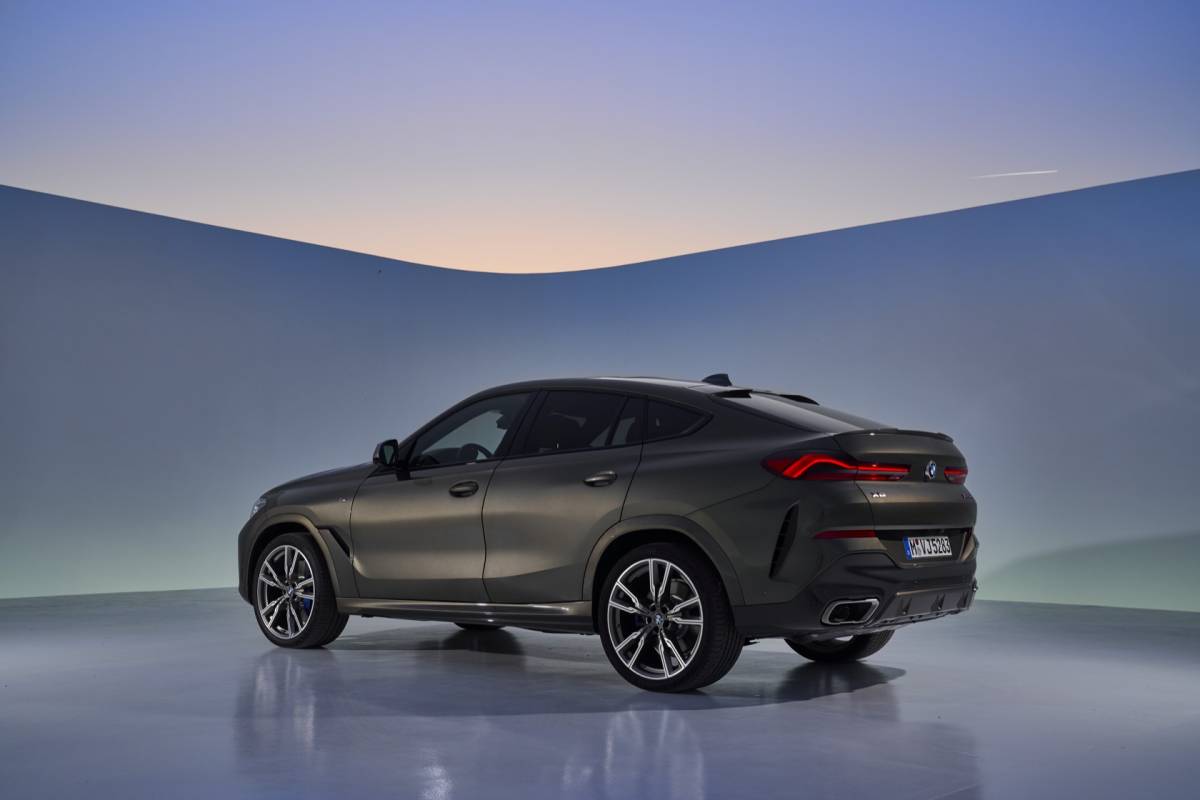 The 2020 X6 has grown in size, being an inch longer – with 1.6-inches more in the wheelbase – and 0.6-inches wider. Height, though, is down almost an inch. The styling is a riff on the familiar: a low, swooping roofline that offsets the standard 20-inch wheels nicely. 21- and 22-inch staggered wheels are optional.

BMW’s designers have given the rear of the roofline a double-bubble form, with twin spoilers atop the steeply-sloped rear glass. A second spoiler is created where the rear fender arches join the hatch itself. However it’s the grille that’s most dramatic. 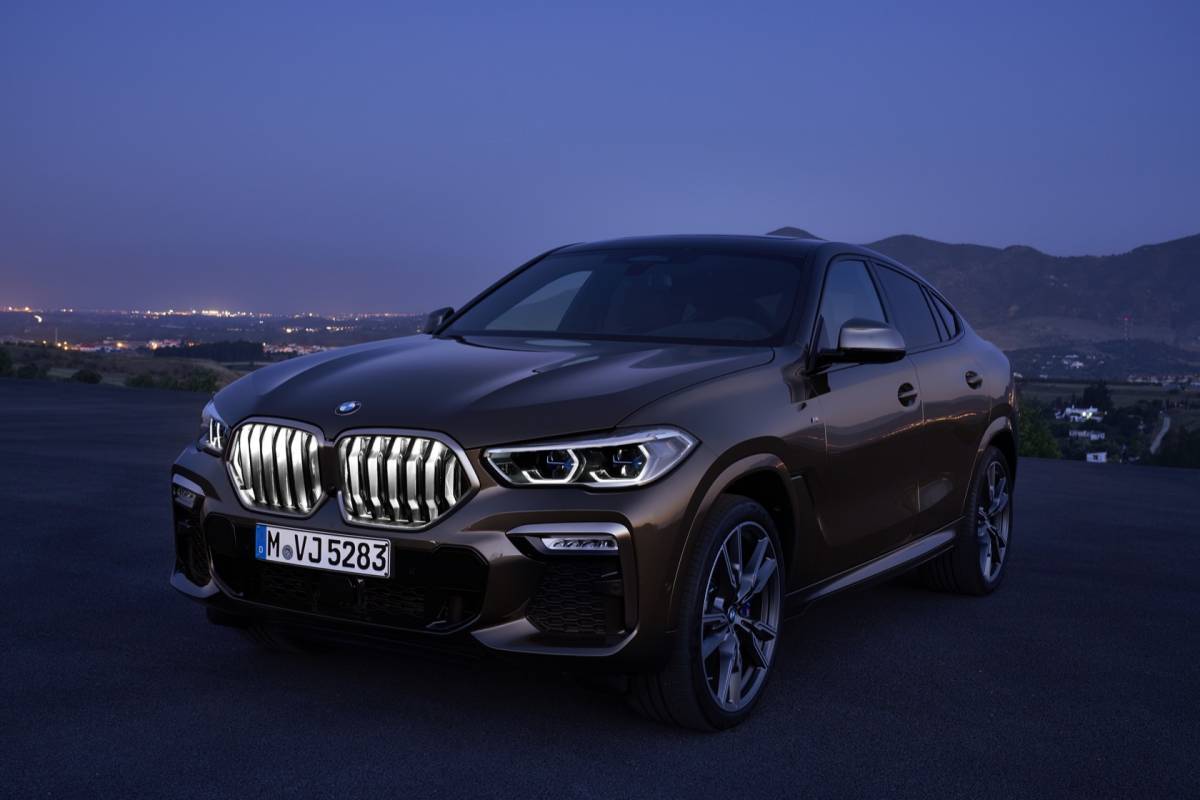 It’s the first time the BMW illuminated kidney grill has been offered, and it’ll be optional on the 2020 X6. It glows when you unlock or lock the car, or can be switched on or off manually. It’s also part of the daytime running lights – connected to the slimline Adaptive Full LED headlamps – and so can stay lit while the X6 is in motion. At the rear, L-shaped taillights have been added.

Also optional is the M Sport pack. That replaces the standard xLine appearance trim’s chrome exterior trim – for the grille bars, tail pipe surrounds, and other detailing – with high-gloss black. If you opt for the 2020 X6 M50i, meanwhile, you get Cerium Grey finish for the grille, mirror caps, tailpipes, and badging, while the M Sport brake calipers are blue. 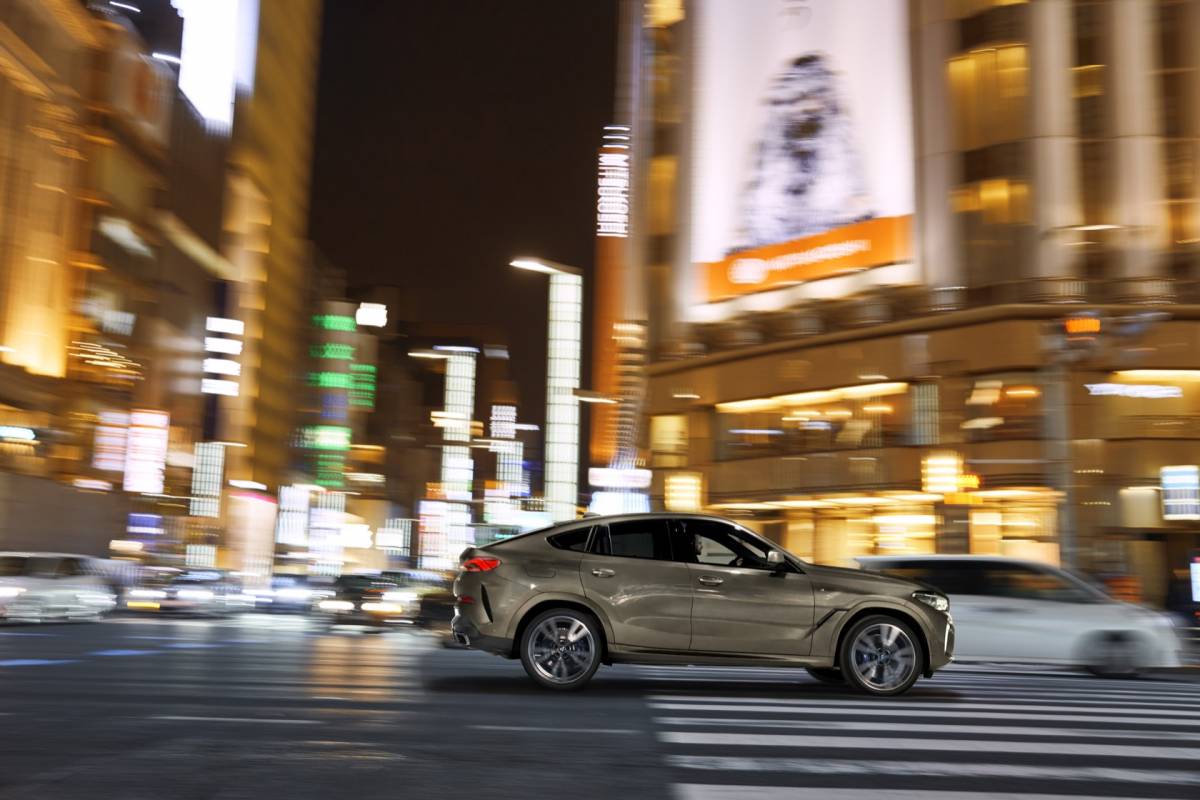 Inside, the focus has been on raising the X6’s luxury credentials. As standard you get climate control and a panoramic glass roof, along with leather, sports seats, and a Sensatec-covered dashboard. Extended Merino leather and BMW Individual Full Merino leather, along with a leather dashboard, are options. 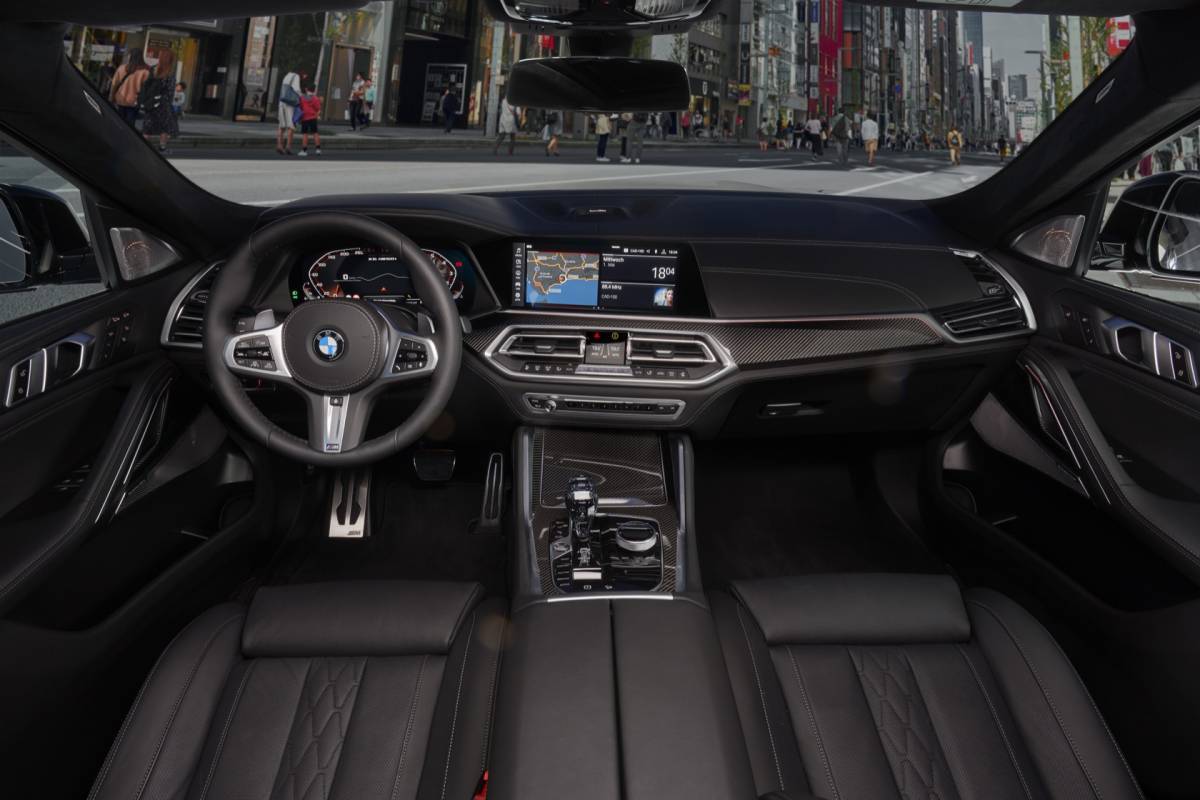 You can also add four-zone climate control, and a Panorama glass roof Sky Lounge, which illuminates more than 15,000 different points in the glass to give the effect of a star-filled sky. Six different illumination colors are offered. Thermoelectric heated and cooled cup holders are optional too, as is the glass package that switches out the transmission selector, iDrive Controller, start/stop button, and the volume knob for glass instead.

A 1,500 watt Bowers & Wilkins Diamond Surround Sound System – with a seven channel amplifier and 20 speakers – is another option. You can also have wireless phone charging. 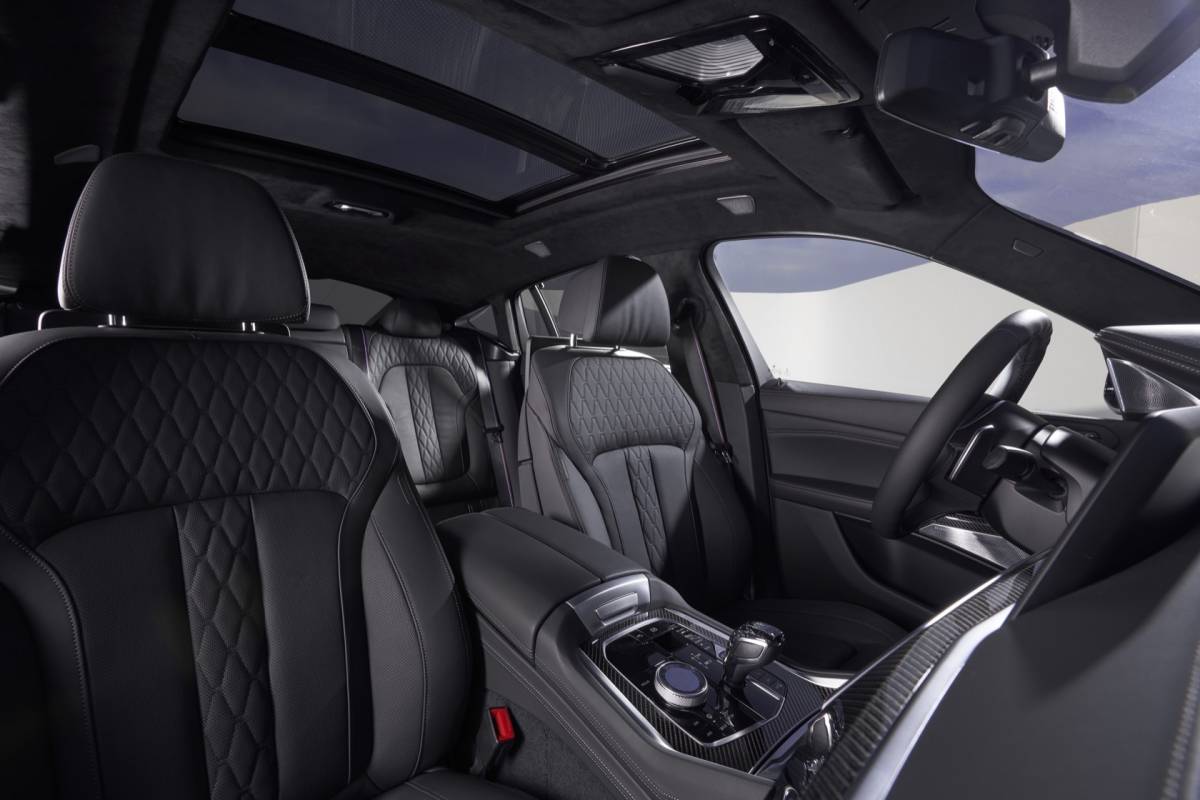 BMW hasn’t sacrificed practicality, mind. The trunk holds 27.4 cubic feet normally, expanding to 59.6 cubic feet when the 40:20:40 split rear seats are folded down. For easier maneuvering, there’s the optional Back-Up Assistant in the Parking Assistant Package, along with an optional 360-degree camera view and 3D view. 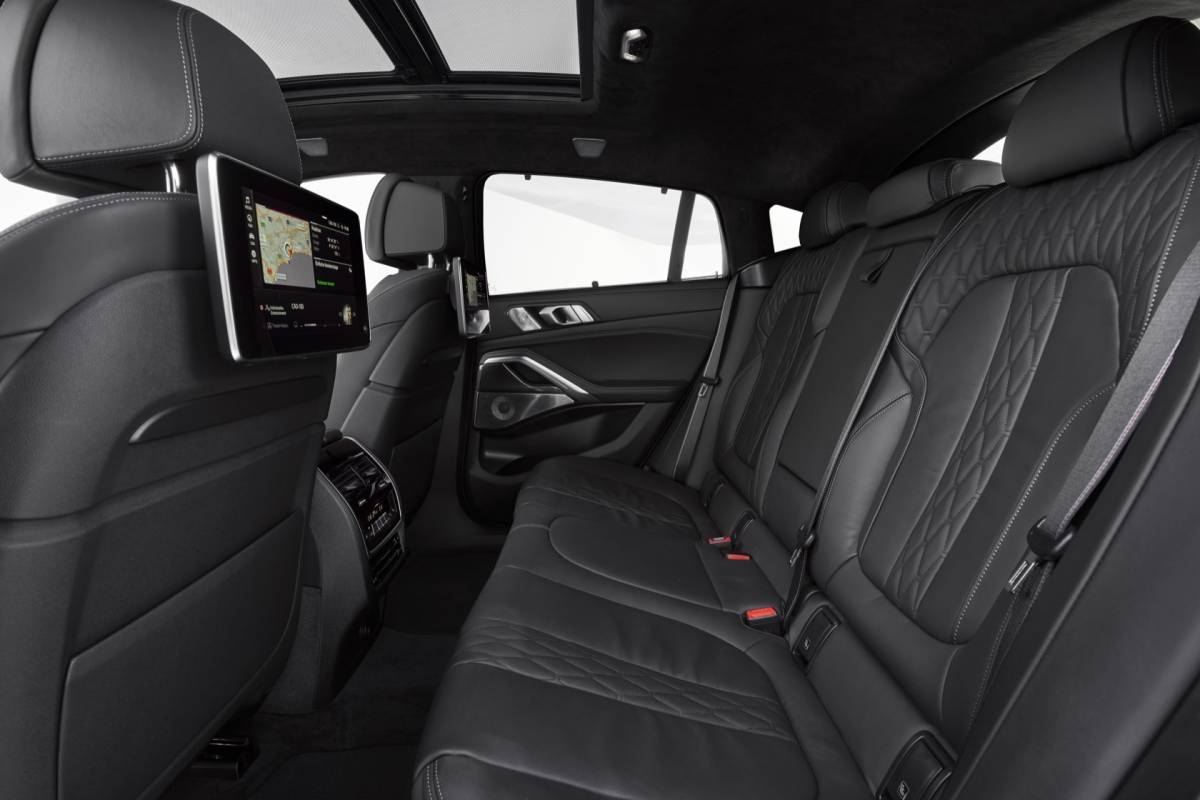 A head-up display can be added, while the Live Cockpit Professional with iDrive 7 is standard. That includes a 12.3-inch instrument cluster display and a 12.3-inch touchscreen atop the center console. Two USB-C ports, plus Bluetooth, are included.

In the rear-wheel drive X6 sDrive 40i, 0-60 mph comes in 5.2 seconds, 0.8 seconds faster than before. The all-wheel drive X6 xDrive 40i reaches 60 mph in 6.3 seconds, a 0.7 second improvement over the outgoing model. Top speed is 130 mph with all-season tires, and 155 mph with the optional performance rubber. 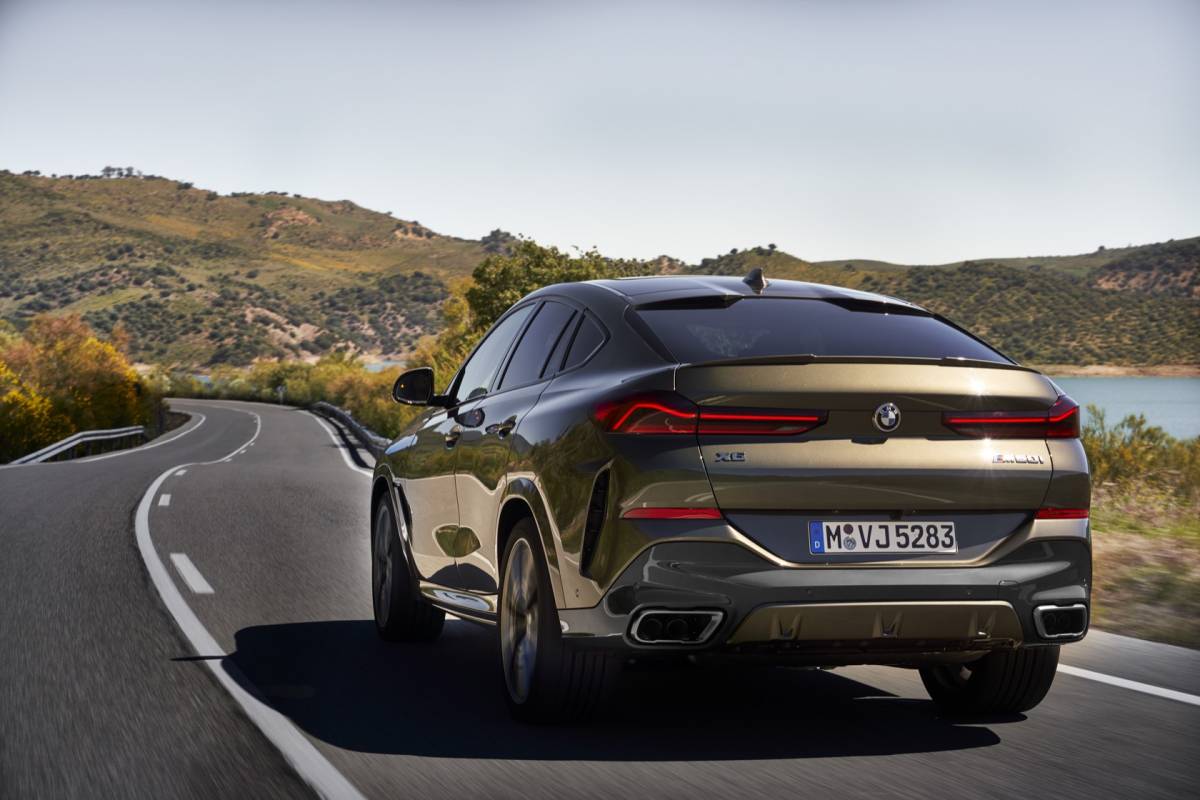 In the 2020 X6 M50i, meanwhile, the 4.4-liter eight-cylinder TwinPower turbo engine makes an appearance. That packs 523 hp and 553 lb-ft of torque, up 78 hp and 74 lb-ft over the old car. An M Sport exhaust system with adjustable sound is standard.

0-60 mph comes in 4.1 seconds, a 0.5 second improvement over the old version. As with the 6-cylinder, top speed is 130 mph with all-season tires, or 155 mph with performance tires. All three cars use an eight-speed Sport Steptronic transmission, which can tap into navigation and cruise control radar data to proactively shift to suit the upcoming road conditions. 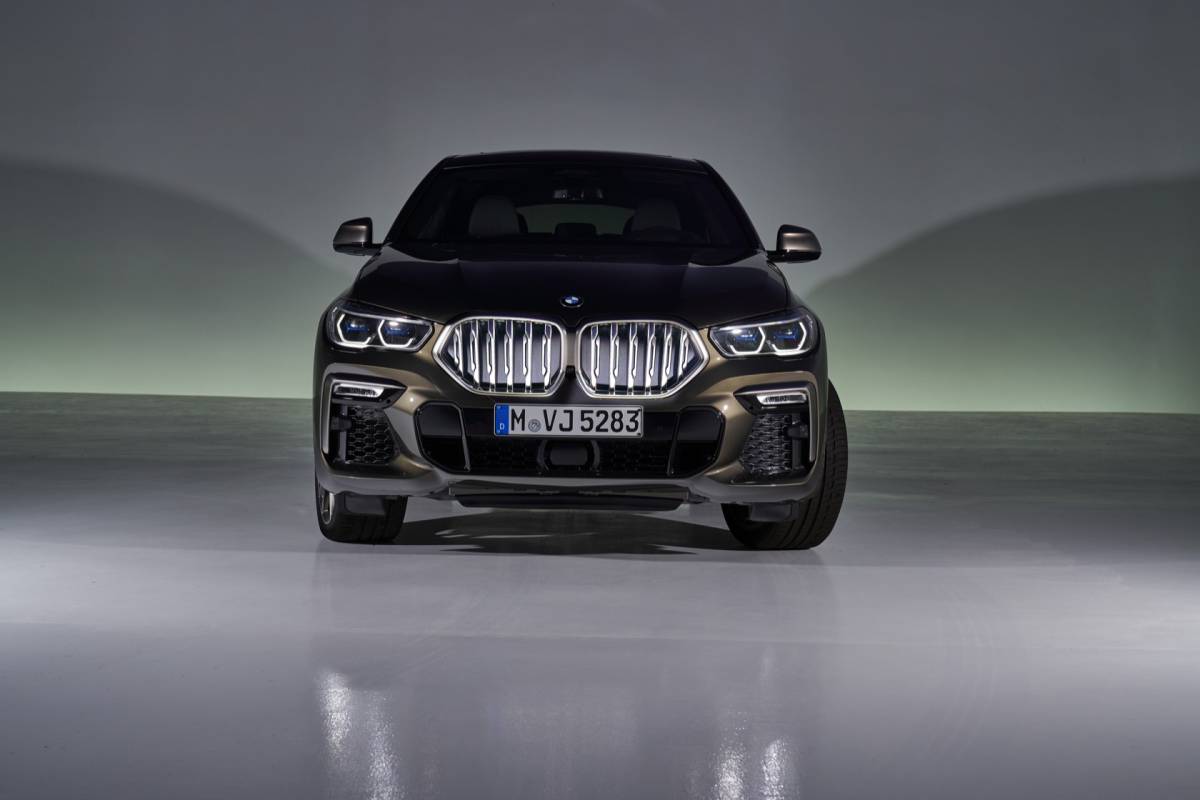 As for the xDrive system, that’s rear-wheel biased for more sporty driving. The X6 M50i gets an electronically controlled rear M Sport differential as standard – optional on the X6 xDrive40i – that can adjust traction to the right and left rear wheels according to grip.

All X6 use a double-wishbone front and five-link rear suspension setup, with Dynamic Damper Control as standard. The Dynamic Handling Package, which adds active roll stabilization and rear-wheel steering, is optional. Finally, there’s optional two-axle air suspension with automatic self-leveling, that can adjust ground clearance across 3.2-inches. An Off-Road Package combines that with the M Sport rear differential. 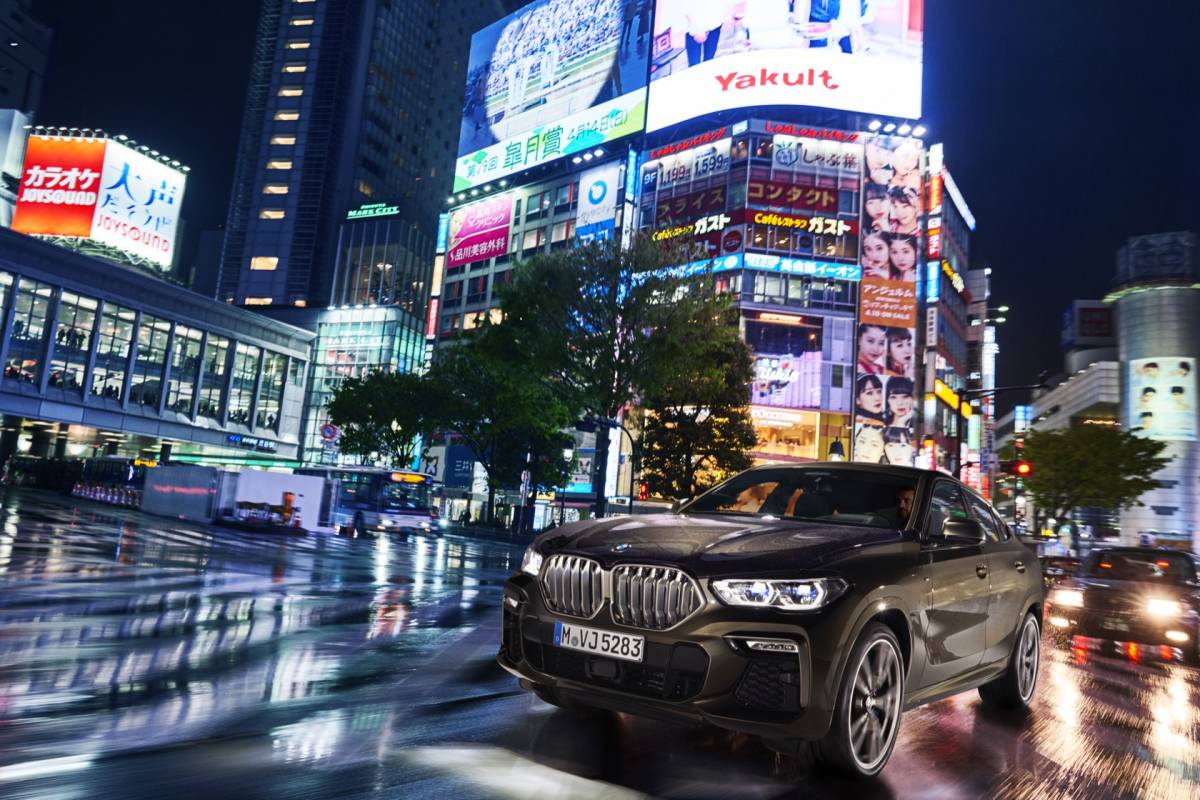