Just how badly do you want people to stare at you? It’s a question I had ample time to consider, hunkered down in the comfortable leather sports seats of the 2020 BMW M8 Competition and trying not to make eye-contact with fellow motorists, pedestrians, or the cyclist that almost swerved into its Java Green Metallic flanks.

For a coupe that makes excess its lodestar, the retina-searing green probably made sense at the factory. After all, with its 4.4-liter twin-turbo V8 good for 617 horsepower and 553 lb-ft of torque, 0-60 mph is 3.0 seconds away, and frankly that feels conservative. Top speed is as much as 190 mph, assuming you pick the M Driver’s Package and in return for $2,500 unlock the standard 156 mph limiter. 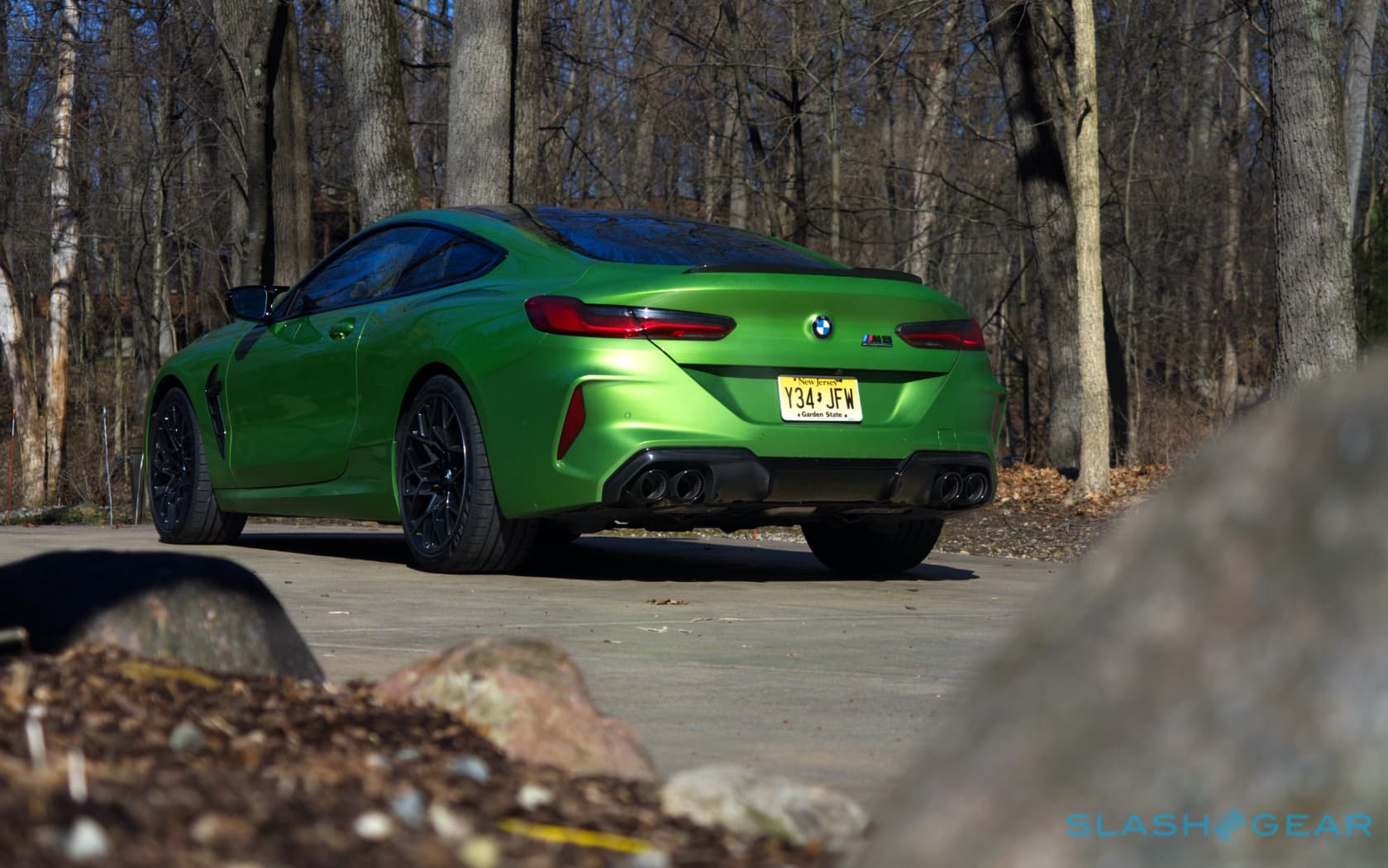 The V8 is wrapped in a body that looks beguilingly pure in this age of oversized BMW nostrils and weird proportions. The grille is big, but mainly wide, snorting atop huge vents trimmed in metallic grey and flanked with furious-looking headlamps. Bulging arches leave the pinched-in midsection all the more shapely. Sure, there are hints of Mustang from some angles, but nobody is going to confuse this six-figure German behemoth for Ford’s comparatively-puny pony. 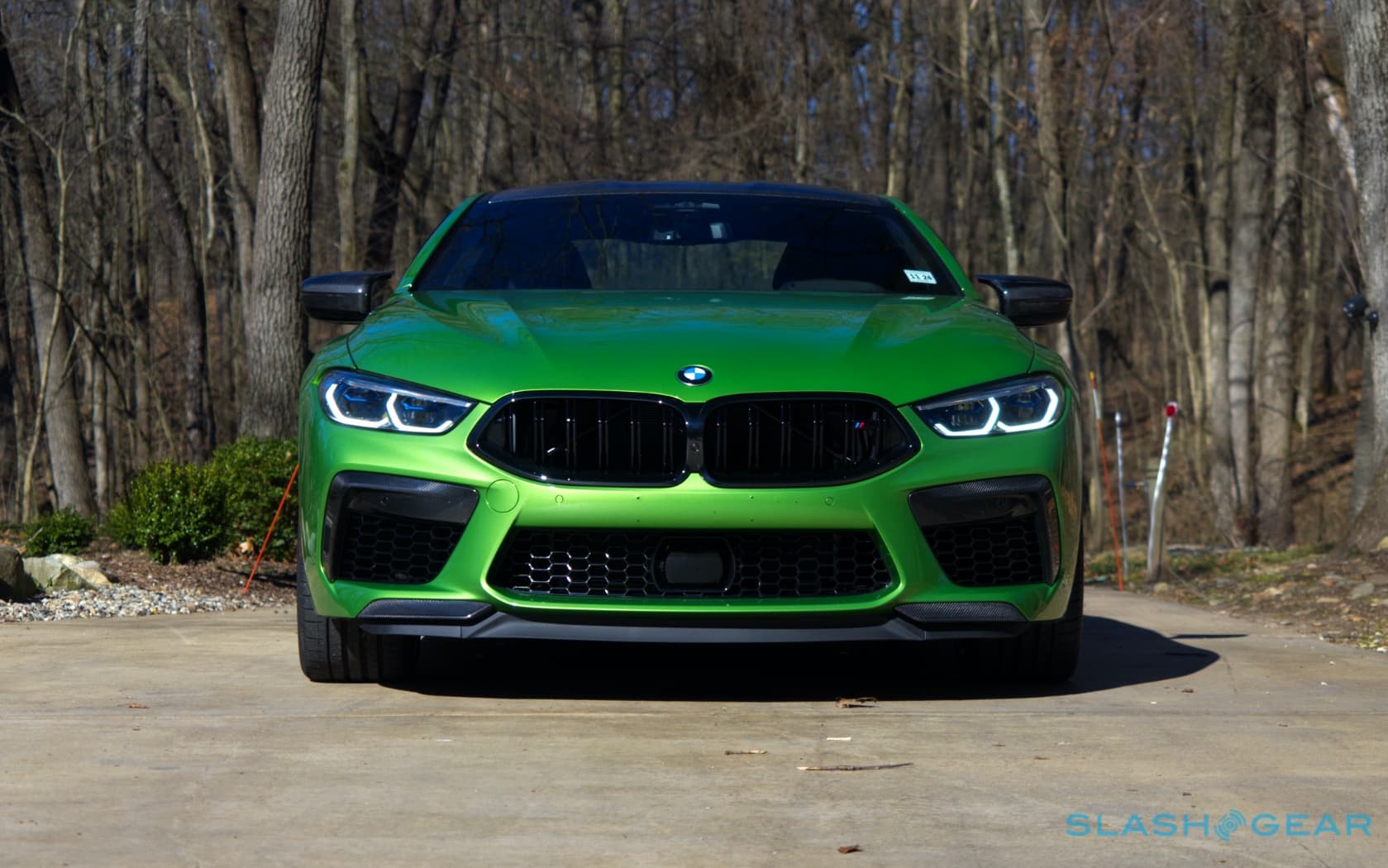 All-wheel drive is standard, along with an 8-speed M STEPTRONIC automatic transmission. As we’ve seen in other M cars, BMW pacifies the purists by offering rear-wheel focused drive modes. If you don’t want the reassurance and outright grip of AWD, you can switch over to settings which will allow you to wag the tail if you’re so inclined (and brave). Just know that with rear-wheel drive comes shutting off BMW’s stability control. 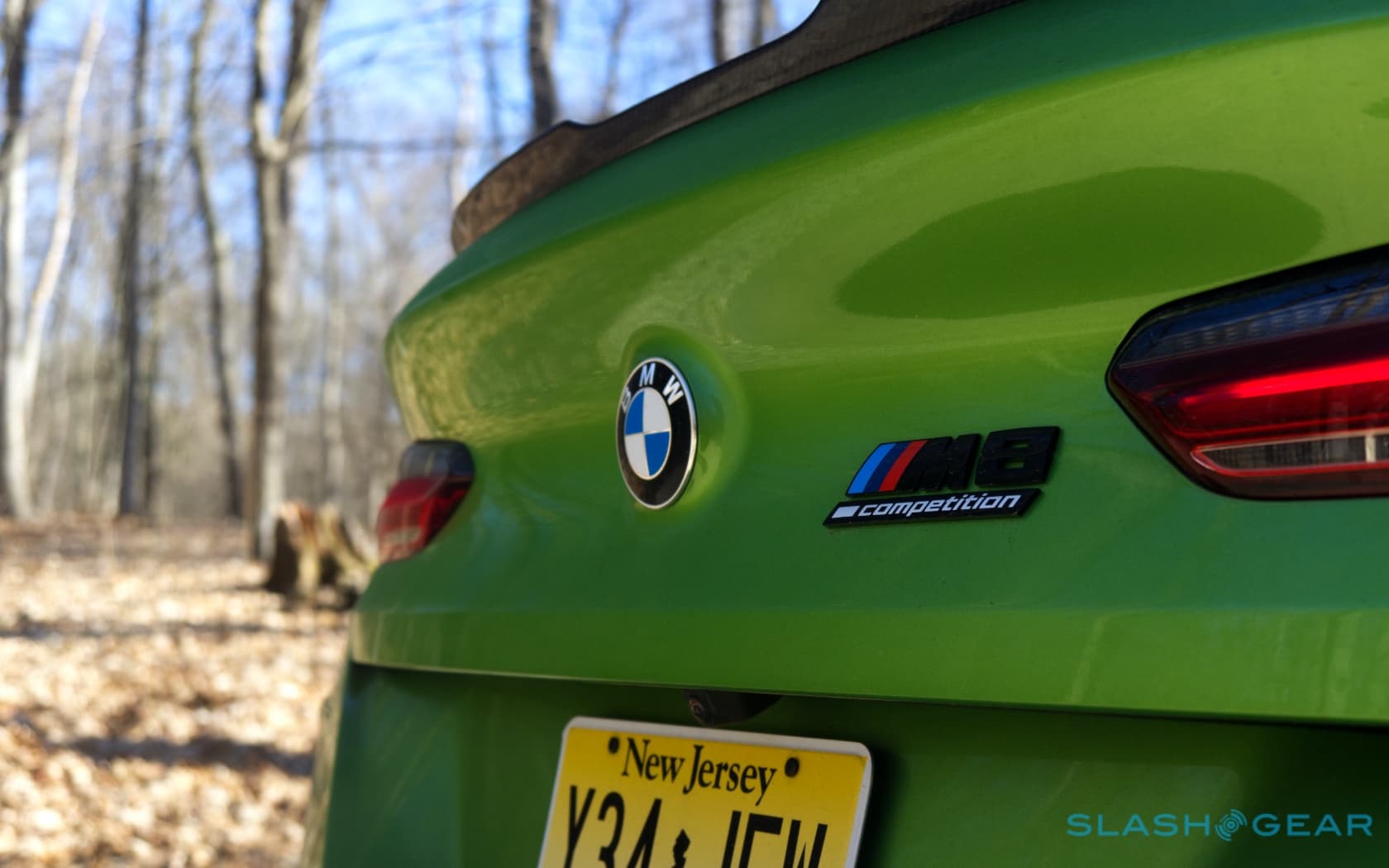 With a starting price of $146,000 – $13k more than a “regular” M8 – and my well-equipped test car nearing $176k, finding the limits of traction on public roads seemed ill-advised. It’s arguably the M8 Competition’s biggest problem, or at least the one you’ll encounter every time you’re at the wheel. Plant your right foot, or get anywhere vaguely near to that, and you’ll so rapidly doing excessive speeds that the digital instrumentation might as well show you your license being shredded. 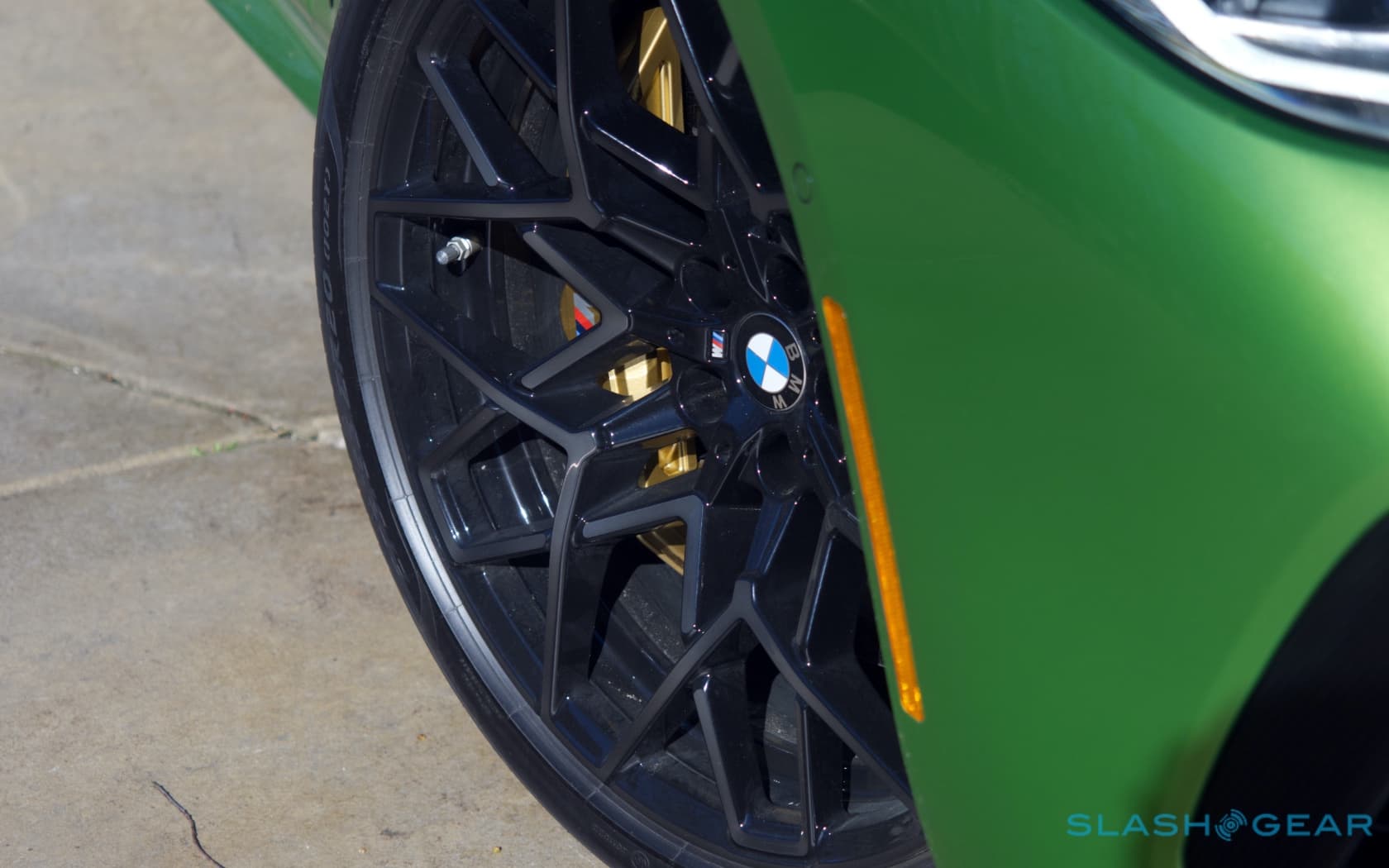 Find a fairly smooth stretch of quiet, straight road – or, better still, a race track – and the V8 will happily vault the M8 Competition to triple digits in a snarling burst of speed. Around town, though, I switched the graphics away from BMW’s little bars showing how many horses and how much torque you’re using, because it was depressing to see them putter so low. 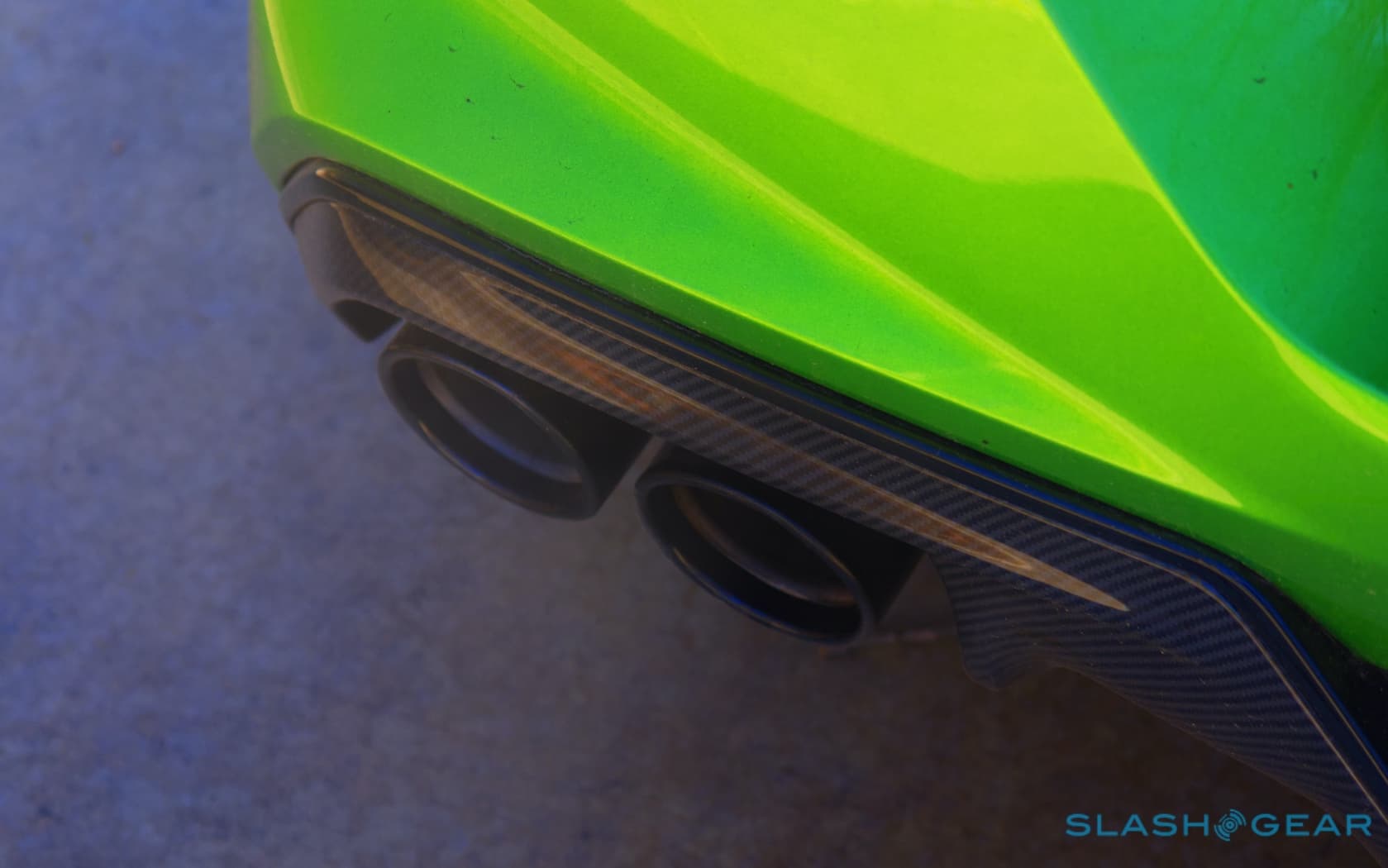 Bursts of speed also bring you to the M8 Competition’s main engineering foible. BMW’s brake-by-wire system promises for the anchors what adaptive suspension and speed-dependent steering have achieved elsewhere in performance vehicles, but it can be a hit and miss experience. In Sport mode they’re grabby and dialed up to sensitivity levels much better suited to a track; in Comfort, they can be tricky to gauge. Despite that, they definitely work well at their primary function, particularly with the $8,150 carbon ceramic upgrade that permits deceleration as aggressive as the M8 Competition can speed up. 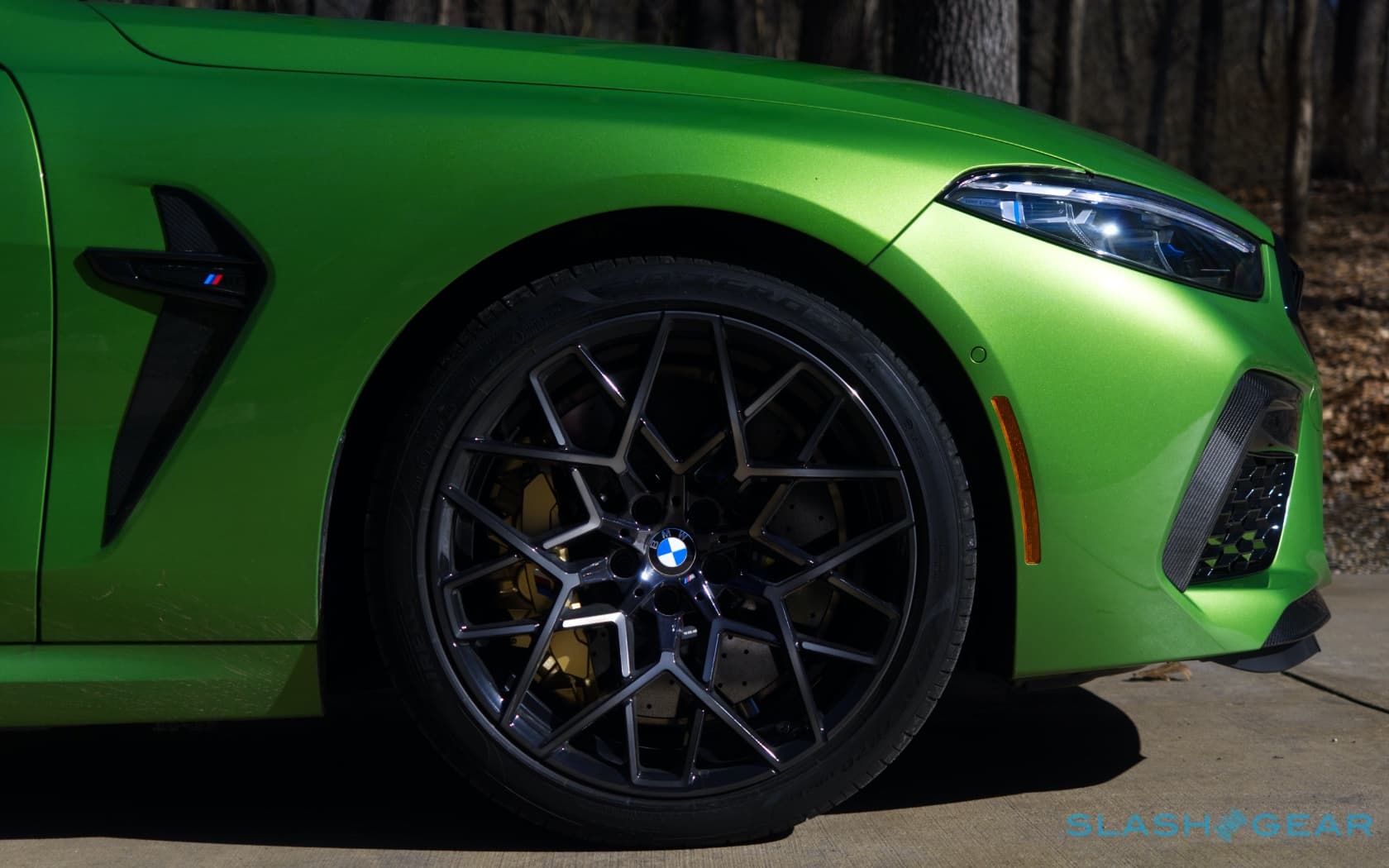 It’s not the most practical way to rocket from A to B. Seating up front is snug, the high and wide center tunnel leaving driver and passenger cocooned in their leather and carbon fiber trimmed nooks. Space in the rear, meanwhile, is best thought of as extra storage rather than something you’d want to inflict on humans. The trunk is actually not unreasonable, though the opening itself can make fitting bulkier items a chore. 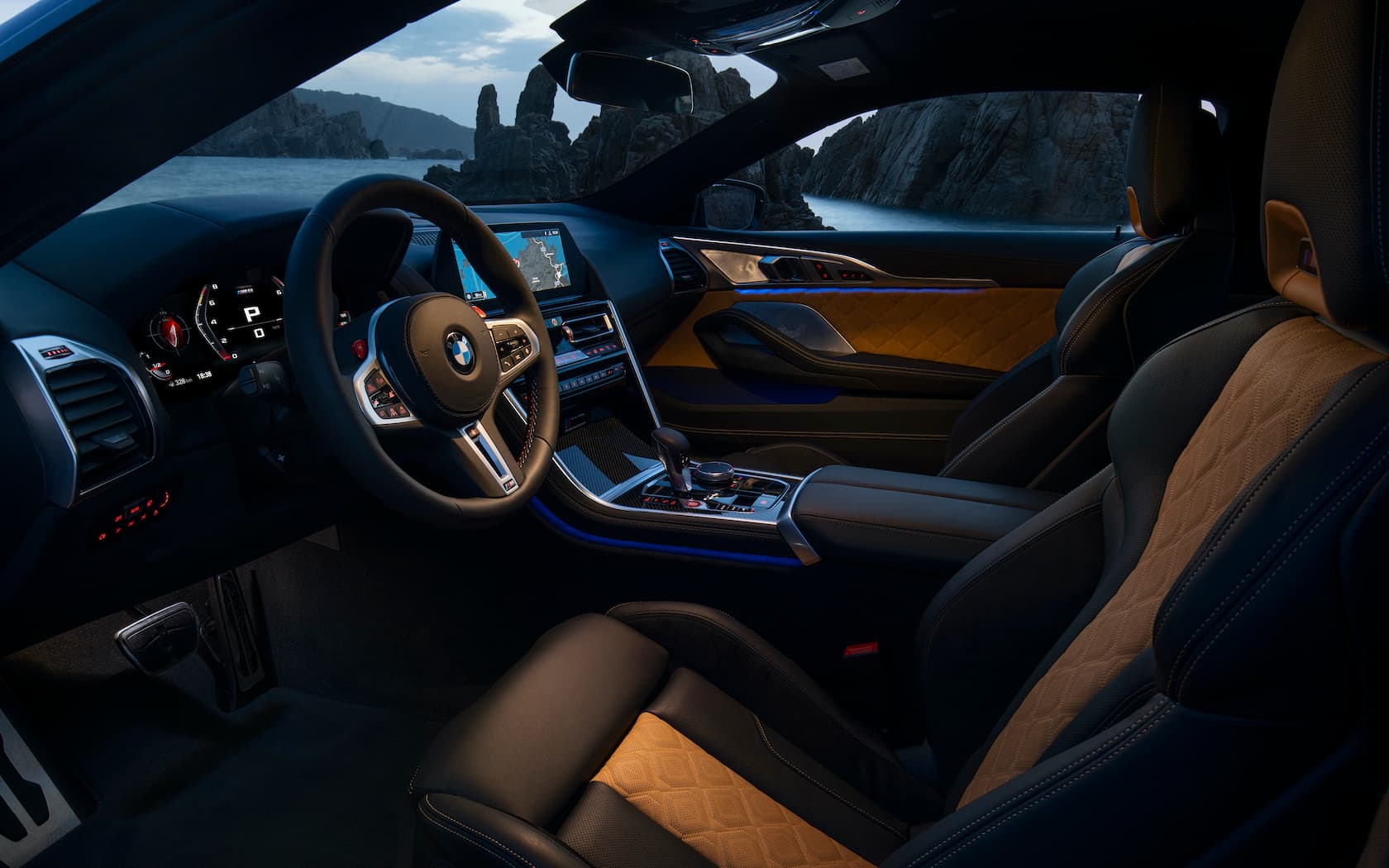 I struggle to care too much about all that, however, because BMW also offers the M8 Gran Coupe with four doors if the second row space is a real issue. Or, you could go for an M5 Competition and have something even more practical.

As in other recent M cars, you could spend fifteen minutes each time you climb in just tweaking the settings. Just about everything is individually adjustable, from the pace of the transmission shifts, to multiple levels of engine and suspension tune, through to how shouty the active exhaust system is. Happily you can also program two such configurations to the bright red buttons on the thick-rimmed steering wheel. 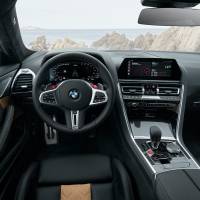 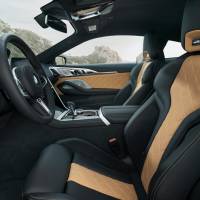 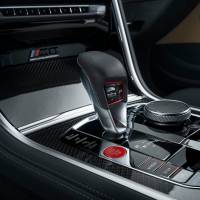 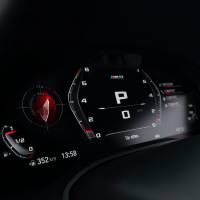 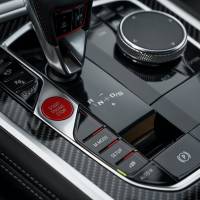 The rest of the cabin is similarly thoughtful, and less vocal than the exterior’s hue. A 10.2-inch infotainment display supports both touch and the iDrive knob, while basically everything from BMW’s more luxe-minded vehicles – including all the active safety tech and driver-assist systems – can be had for when you’re trying to use the M8 Competition as a real tourer. Just don’t expect it to come standard, with two Driving Assistance packages totaling $2,800 if you want the full complement.

The Bowers & Wilkins audio system is a worthy $3,400 upgrade, while the $5,400 real carbon fiber trim sits cohesively with the leather and metal. Honestly, it’s not hard to see how things spiral up to that $176k price. 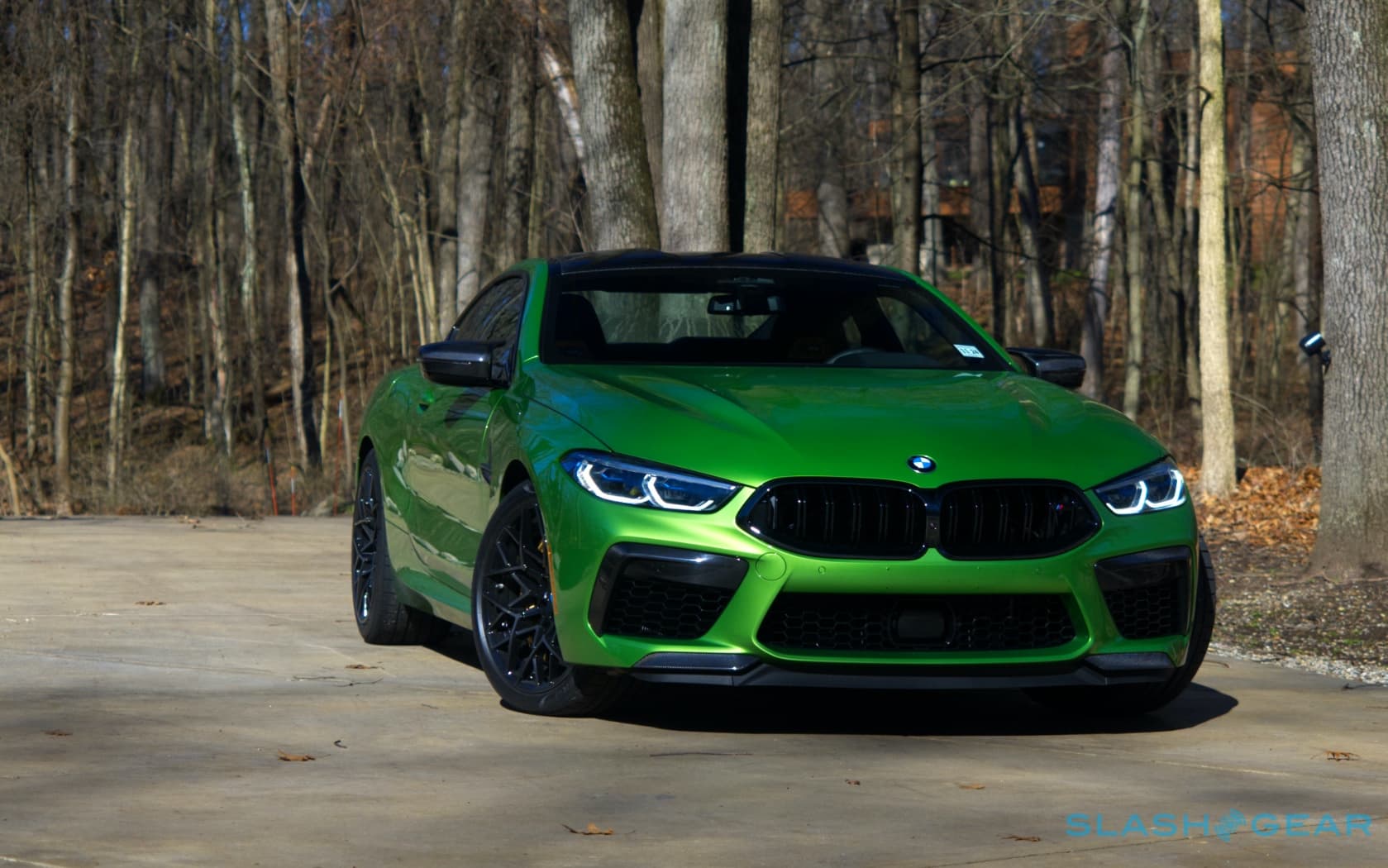 A similarly-equipped M8 wouldn’t be far behind, either, though as you slip back into the more attainable 8 Series models you also get more everyday usability. Even at its most cosseting, the M8 Competition is a stiff ride, with the capacity to realign your spine over more unruly asphalt. Those who need their GT duality to satisfy more of the comfort end of the scale should probably look to the M850i, where the sacrifice in outright performance also comes with a welcome uptick in the levels of plush. 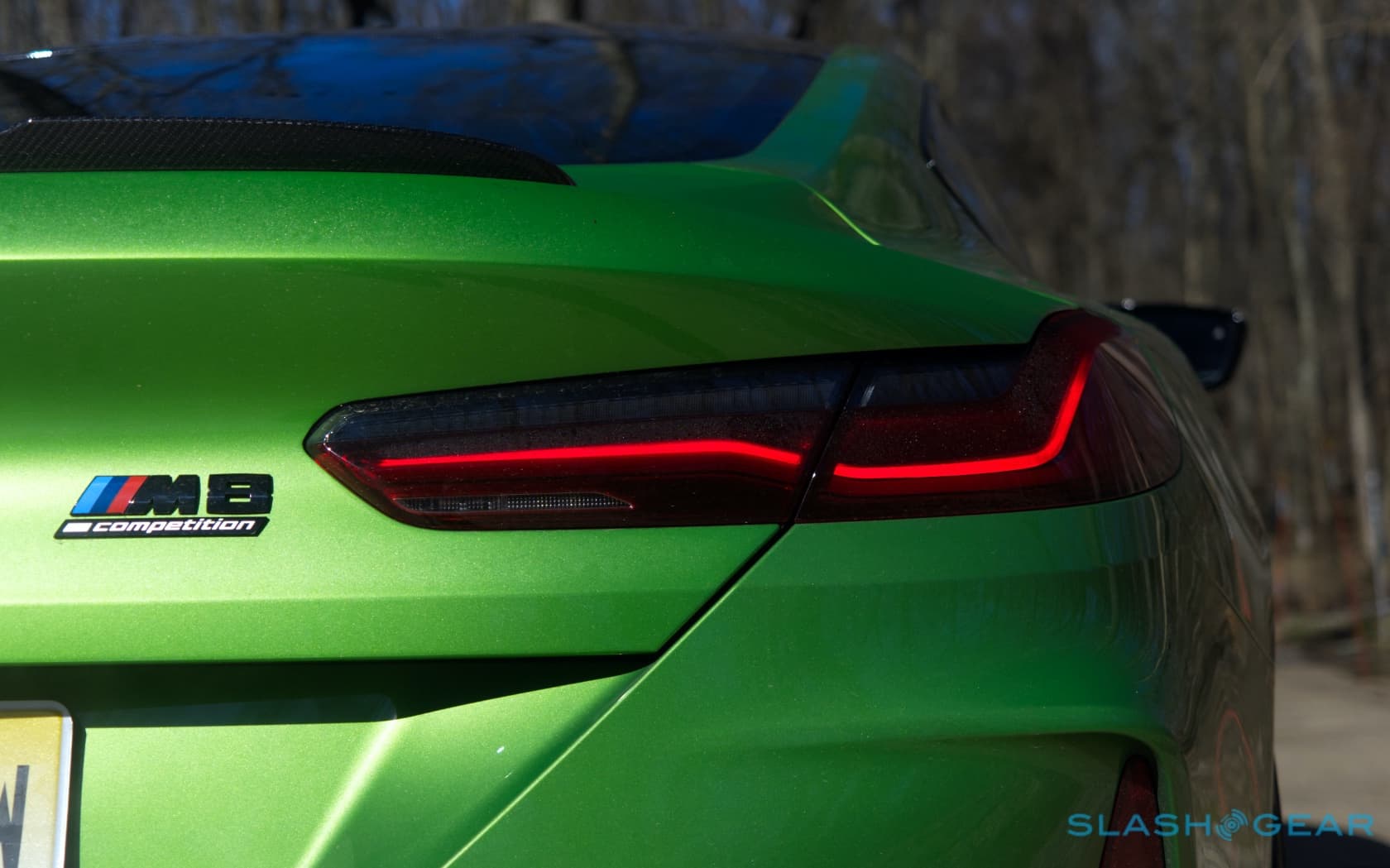 This bright green beast, in contrast, is expensive and excessive, and eager to shout about both of those things. In short, not a car for the shy, retiring, or frugal driver. That’s the rational view, anyway, but – despite knowing how much sense its more attainable siblings make – it’s hard not to be charmed nonetheless by the BMW M8 Competition’s ability to play merry havoc.