Could Audi be the king of quiet sports sedans? The 2020 Audi S6 isn’t short of a bark from its exhausts when the need arises, but when it comes to staying under the radar while still having horsepower on tap, this may well be the four-door to pick. After all, not everybody wants to shout about their performance.

It feels like a while since the “Q” car – or, as they might say in the US, a “sleeper” – was last in fashion. Unofficially defined as a vehicle that could put many – or most – to shame at the lights, but without wearing its performance on its sleeve, it’s a compliment that once epitomized BMW’s M-badged sedans. 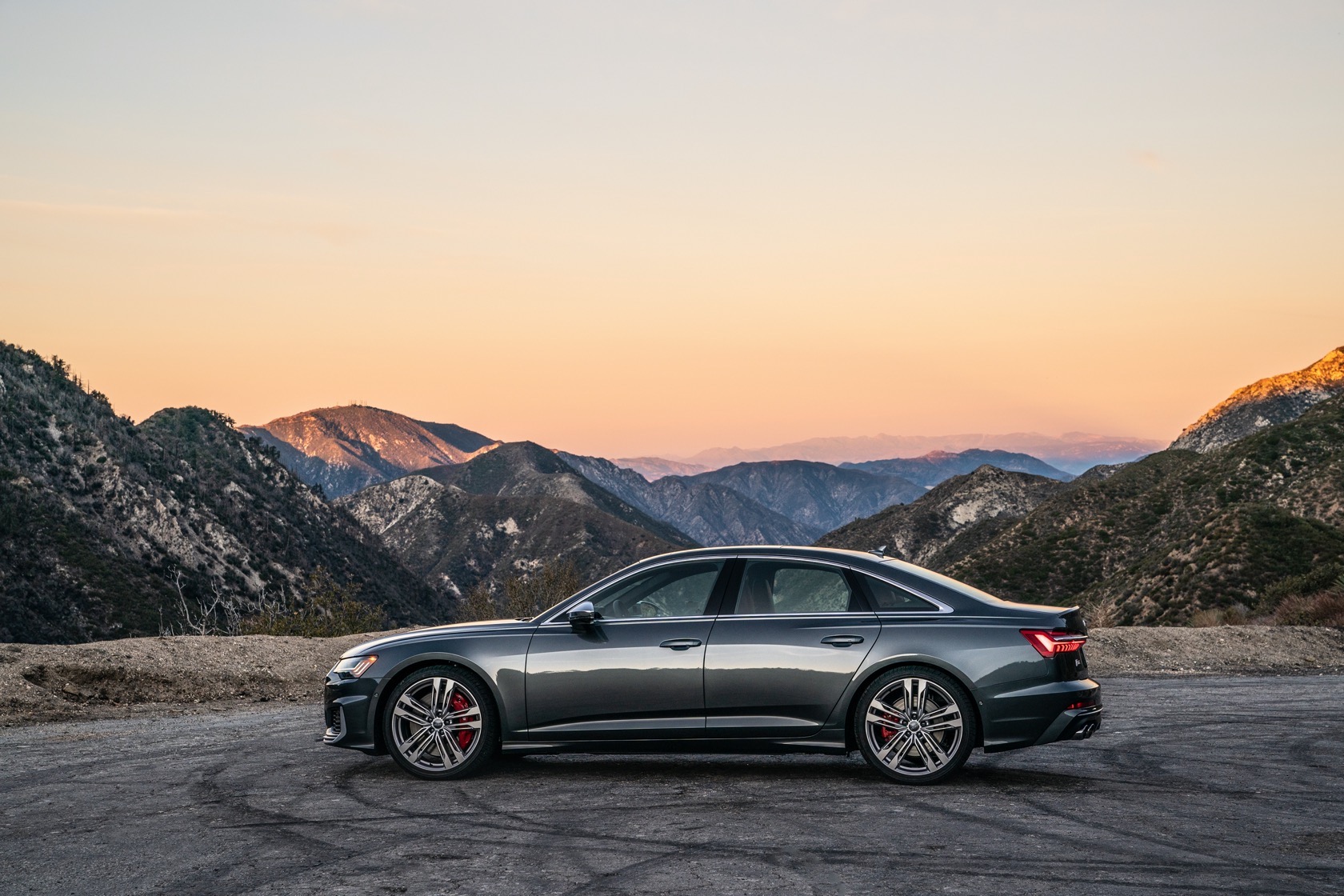 These days, though, visible profligacy is more commonplace. That, combined with BMW’s oversized corporate snout, has left the last few M-cars too vocal about their talents on tap to qualify for “Q” status. Mercedes-AMG’s beefier sedans are much the same.

The new Audi S6 is, in comparison, almost surreptitious. Not ugly, no, not even close. Just handsome in a fairly restrained way. Maybe even a little more timeless, in the manner that a first-generation S8 – a “Q” car king if ever there was one – still looks great today. 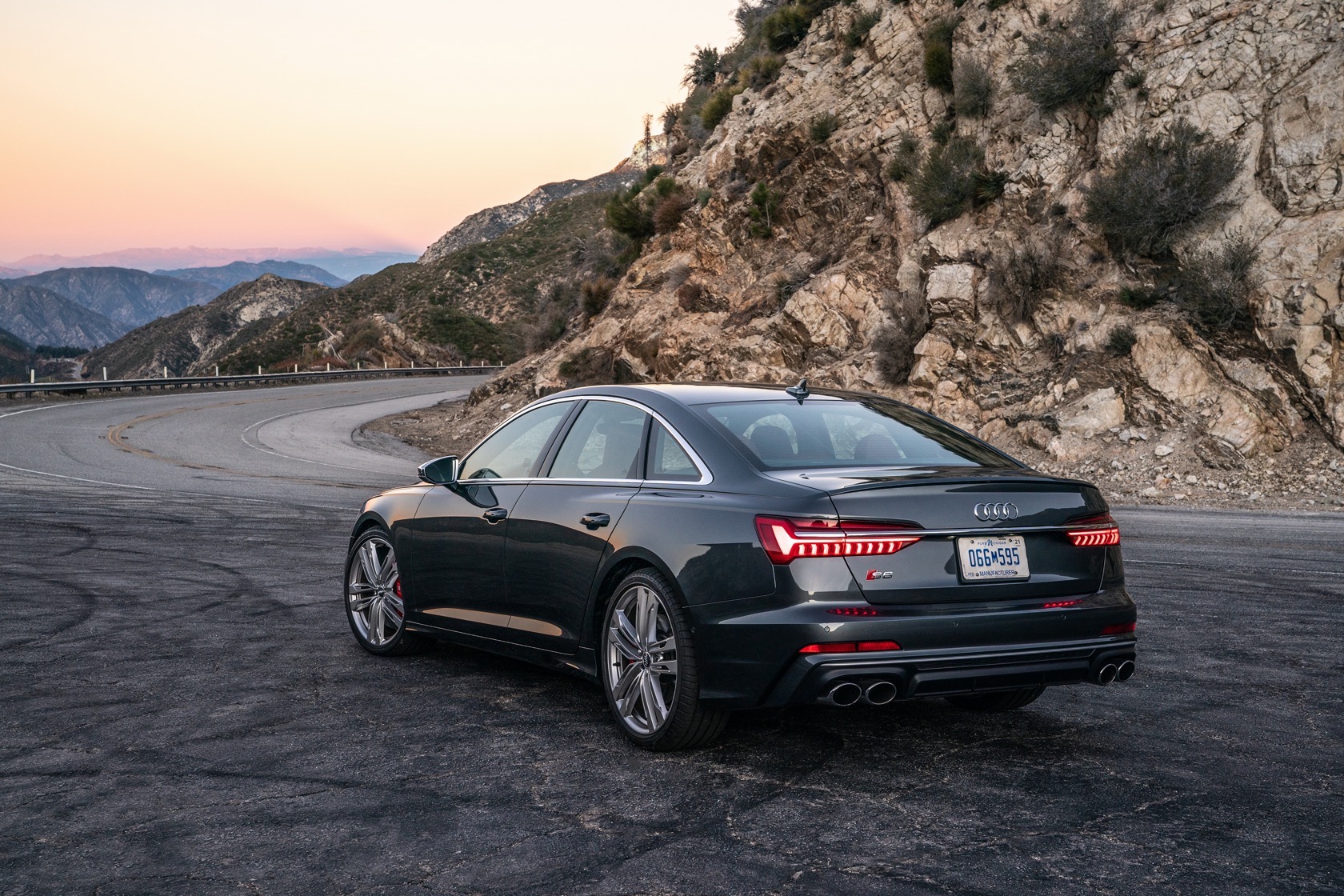 Grills are bigger these days, but the S6’s isn’t too outsized. Big wheels are de-riguer, but the standard 20-inchers avoid looking like jewelry (and the optional 21-inch versions aren’t too brash, either). Even the price strikes that balance: from $73,900 (plus $995 destination) for the 2020 S6 Premium Plus.

“Q” needs its flip-side to work properly, of course: it has to have some power. In Audi’s case, that comes courtesy of the 2.9-liter TFSI V6 biturbo engine, dropping two cylinders but nudging up the power figures over the last generation car with its 444 hp and 443 lb-ft of torque. 0-60 mph arrives in 4.4 seconds. 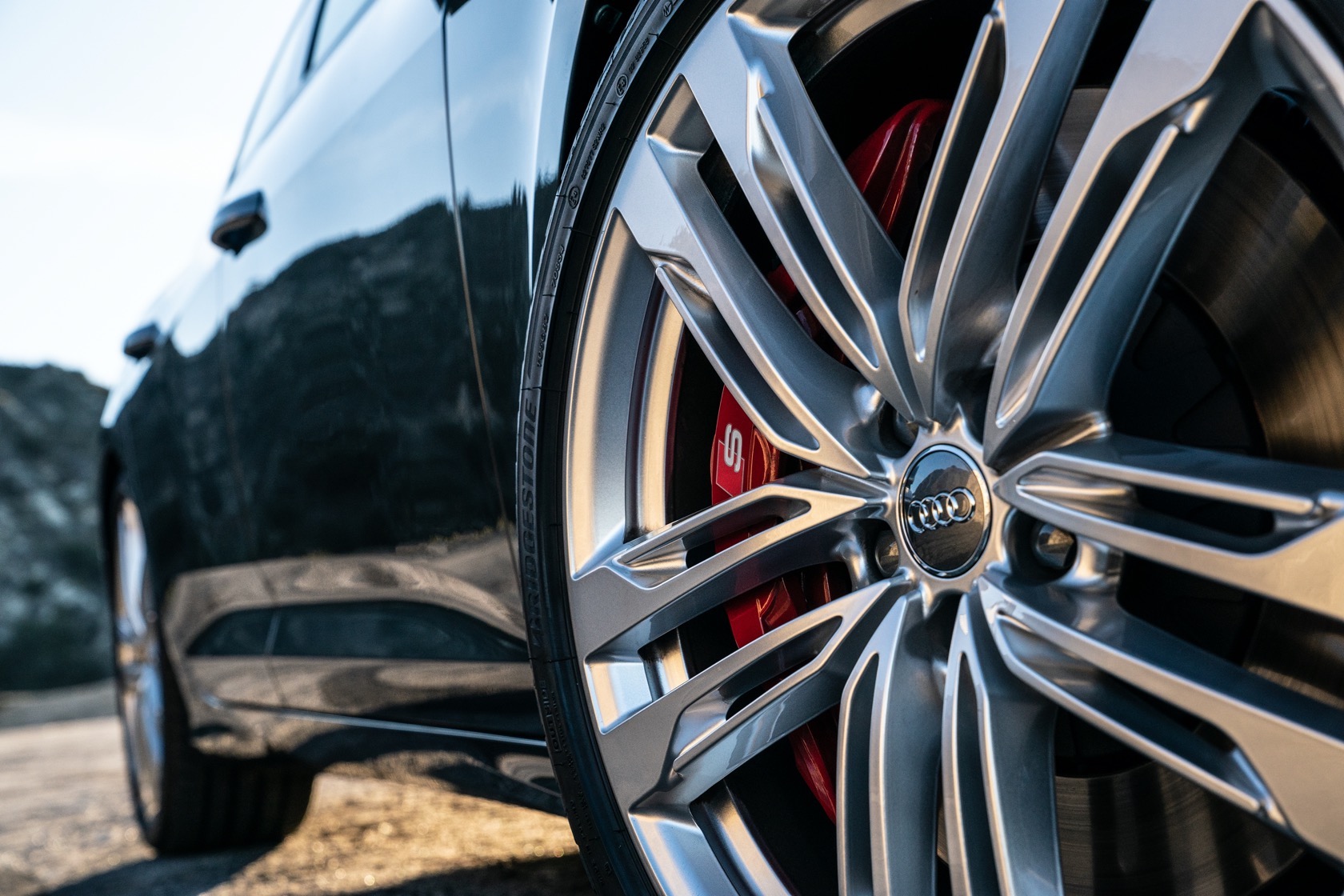 Quattro all-wheel drive is standard, typical with a 40/60 power balance. When required, though, the S6 can funnel up to 80-percent to the rear. As standard there’s fixed ratio steering, but add the Sport Package and that’s swapped out for dynamic steering, rear wheel steer, and a rear sport differential that can push power left to right, too.

Audi says it expects about a quarter of new S6 buyers at most to go for the Sport option, and an even smaller percentage of that group will add the steel suspension. As standard, the sedan comes with air suspension and Audi’s familiar Dynamic, Comfort, Auto, and Individual drive modes; it’s a great way to be driving a performance car one moment but then a cushy luxe sedan the next. The automaker says it expects that duality to be most popular with S6 buyers. 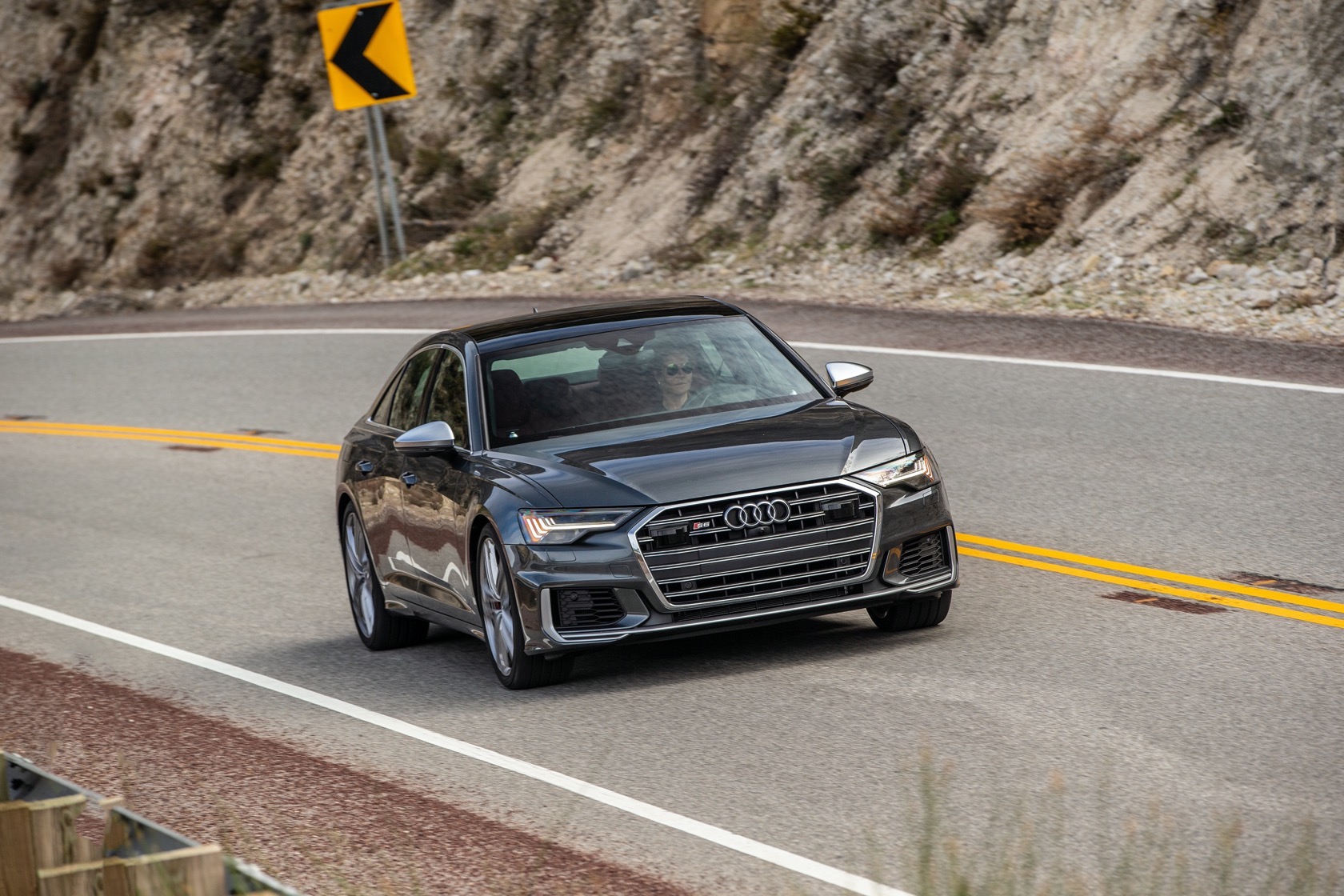 Those willing to sacrifice some of plush for more push can have the Adaptive S sport suspension. That combines steel springs with electronically activated dampers. The upshot is a more urgent, aggressive car; the drawback is that the S6 simply can’t reach the same A6-esque comfort in that configuration.

Personally, I’d take the middle ground. In the twisting mountain roads of Woodside, CA, the all-wheel-steer S6 zipped nimbly between the redwoods, its tail kept firmly in check and all the better for its sense of urgency. With the rear wheels turning counter to the front at sub-highway speeds, the wheelbase feels shorter and the Audi more easily placed. 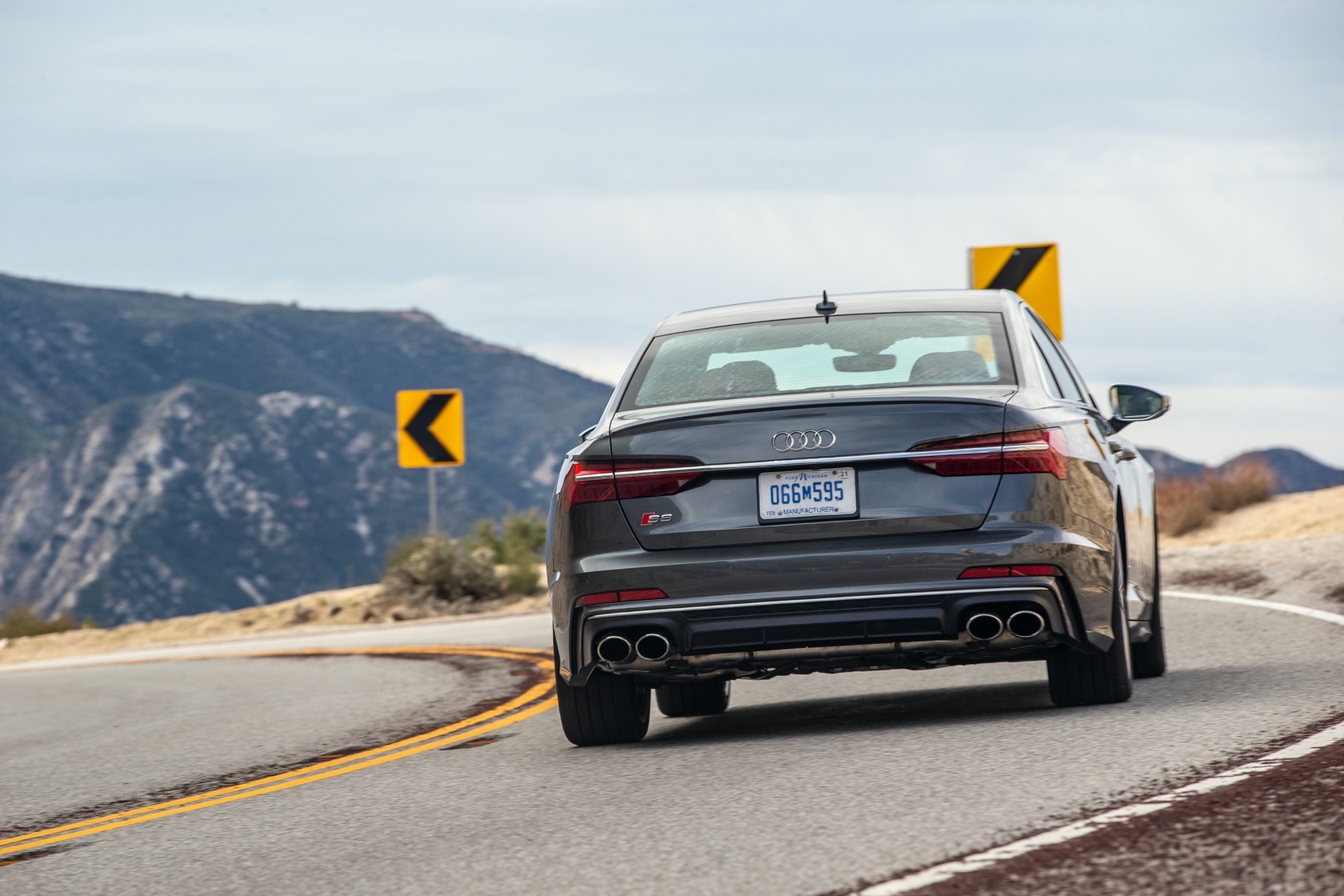 Out on the highway, though, the wheels turn in tandem, front and rear. It makes for more stable, planted lane-changes. Factor in the S6’s adaptive cruise with lane-keeping assistance and you’re looking at a superb road-trip car. Thanks to downsizing from the old S6’s V8 you can even expect better fuel economy.

It might seem strange to be thinking about consumption figures in a sports sedan, but a true “Q” needs to be a jack-of-all-trades. 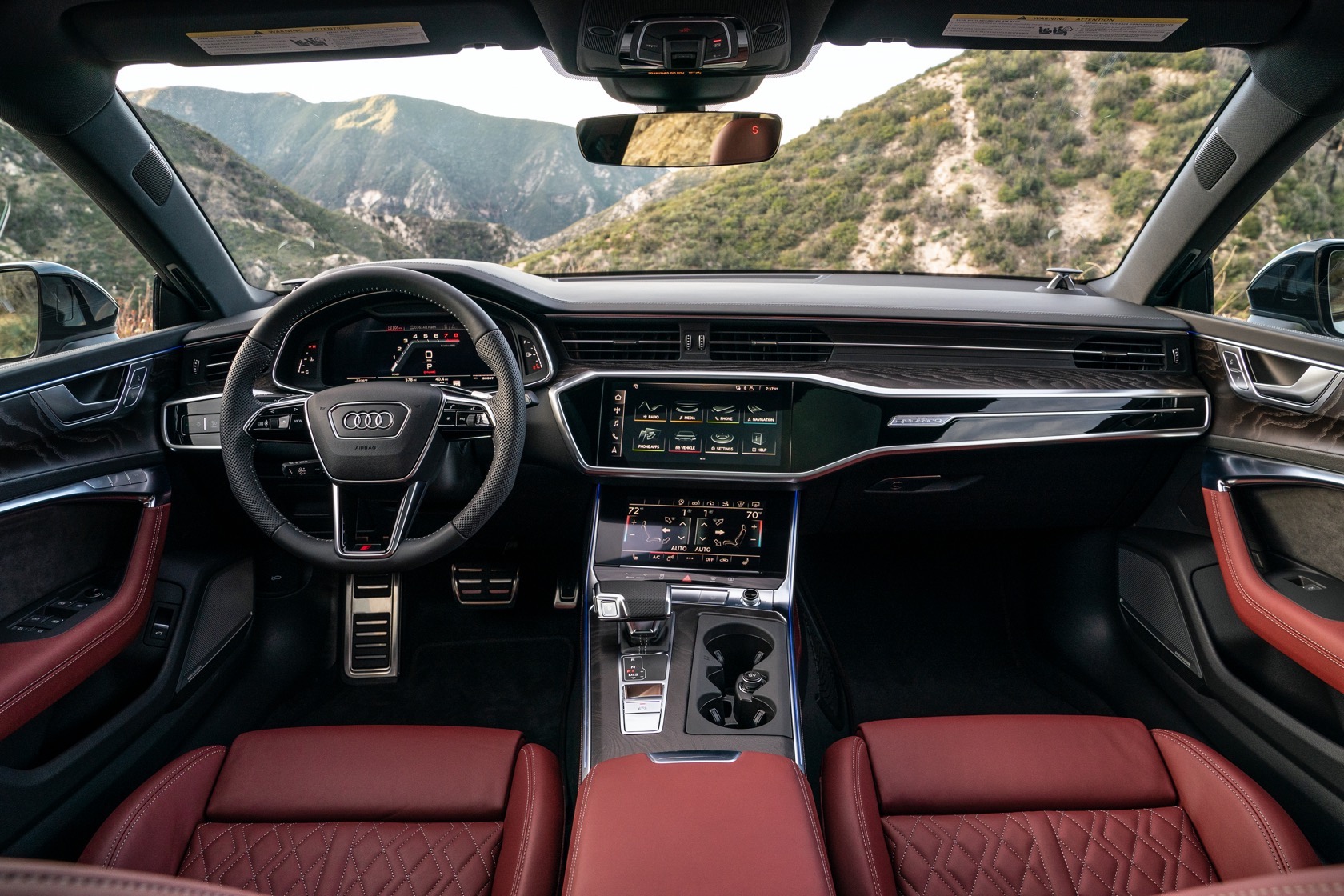 Here’s the embarrassing secret about exotics: doing everyday things in them just gets a little… tiring. It’s the epitome of a #firstworldproblem – or whatever the 1% subcategory of that is – but there are times when you want to be ostentatious and turn heads, and there are times you just want to go buy some milk without having three conversations in the parking lot about dihedral doors. Because while you may be playing the tiniest of tiny violins right now at the thought of the poor car writer being upset that people are staring at his McLaren, or Lamborghini, or whatever other big shouty show-car he happens to have the keys to, sometimes cruising under the radar just seems easier. 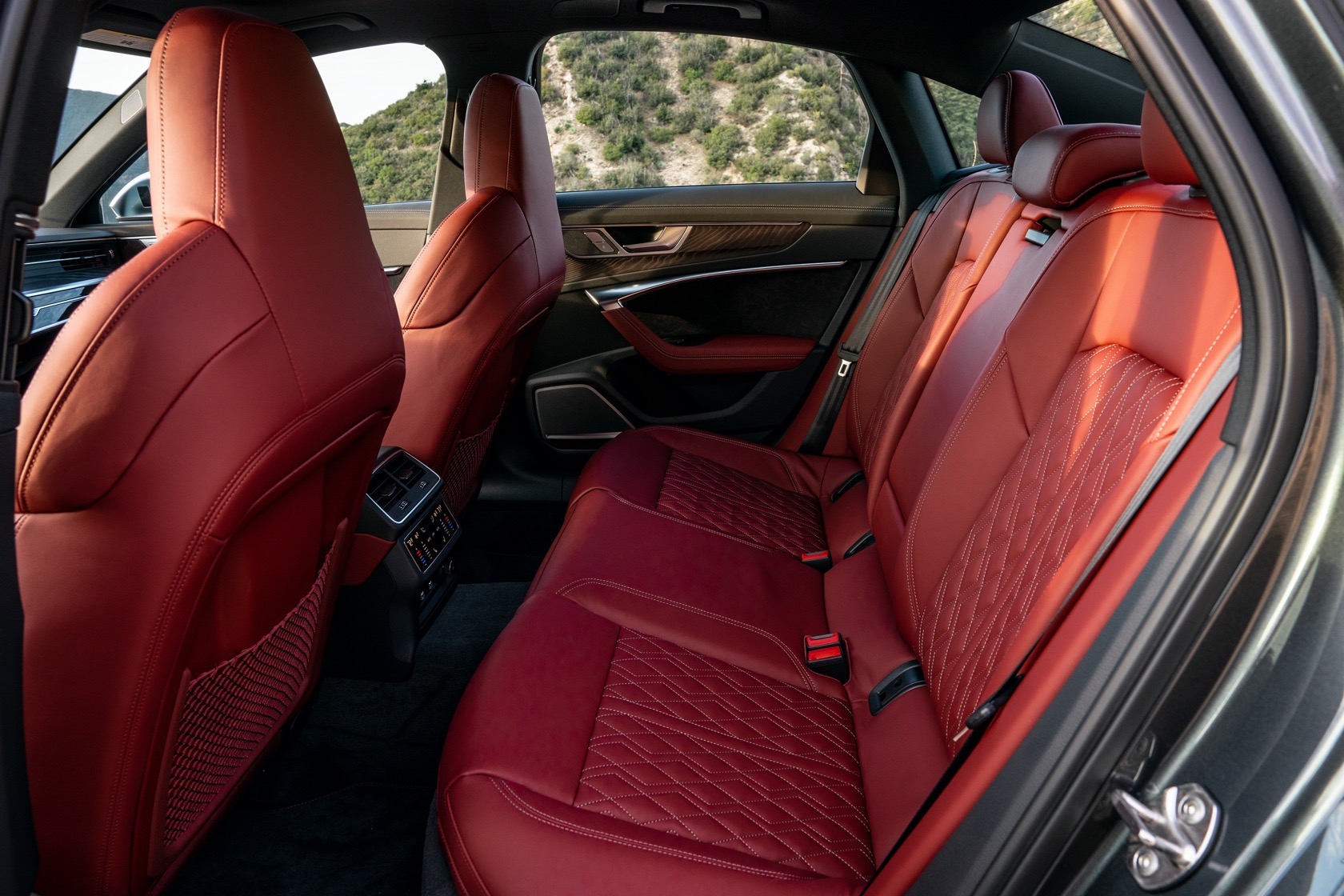 The S6 seems tailor-made to make you murmur “oh, that’s nice” under your breath, in quiet admiration. The seats are just the right balance of firm support and long-distance comfort. The dashboard tech is plentiful – including Audi’s latest dual-touchscreen MMI touch response infotainment system, Virtual Cockpit, a Bang & Olufsen audio system, wireless Apple CarPlay and wired Android Auto, and wireless phone charging, among a long list of other things – but straightforward to use. The switchgear is reassuringly solid. Rear seat space is ample for adults, and there’s a healthy 13.7 cubic feet to play with in the trunk. 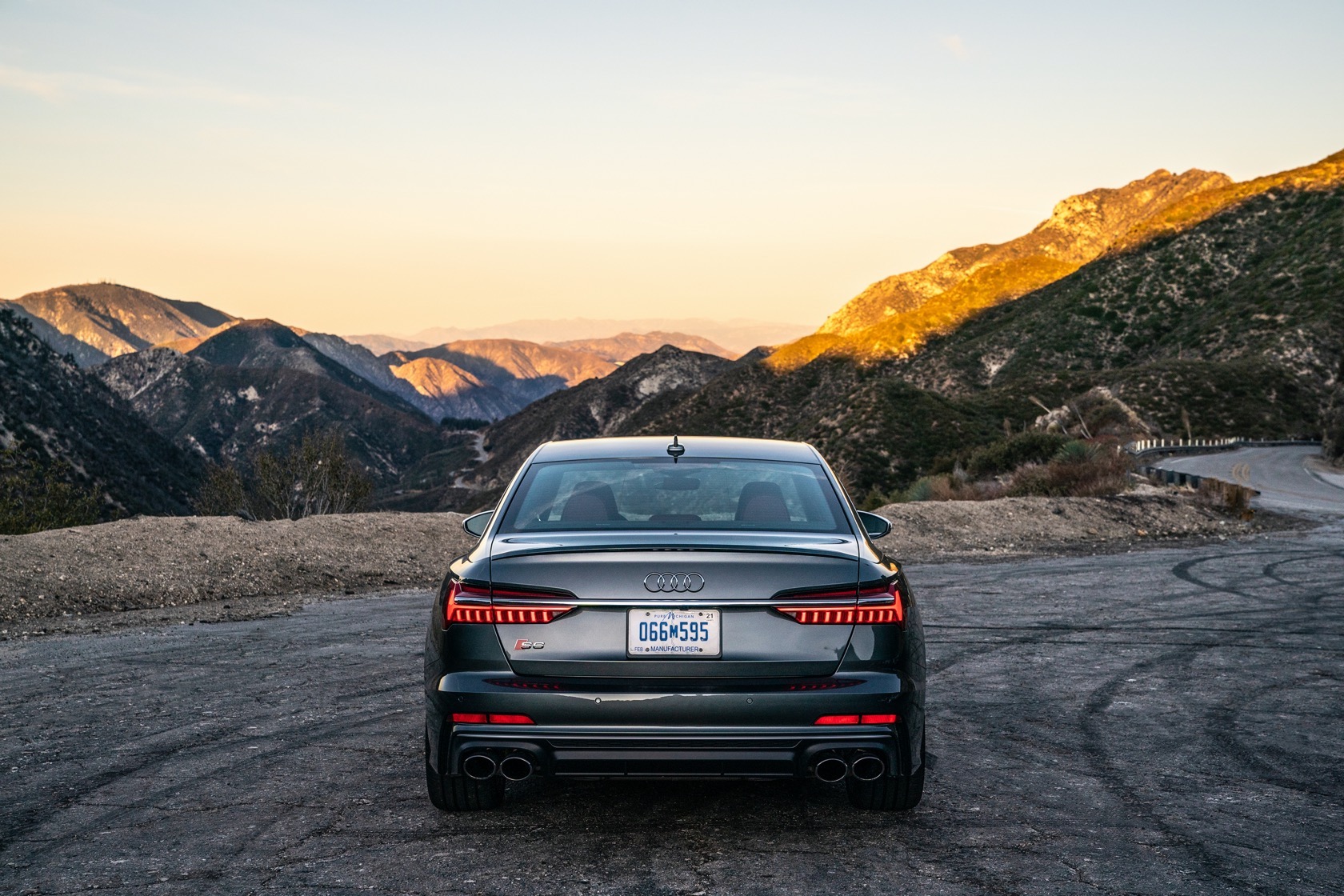 Don’t confuse “Q” with boring. Balance is a difficult thing to strike these days; if you try to please everyone, you can end up just frustrating most instead. Audi’s quest to slot a sports sedan in-between the mainstream A6 and the more ostentatious RS6 demanded just the right amount of excess and restraint, and the worst I can say about that is it could come off as calculated.

I can take that, and I suspect there are plenty of potential S6 buyers who won’t find it offensive either. Just don’t expect them to shout about that decision.