If you thought Ram was going to leave Chevrolet and Ford to have all the truck fun at the Detroit Auto Show 2018 this year, think again. The 2019 Ram 1500 is another from-the-ground-up recreation, shedding nearly 225 pounds from the outgoing truck and gaining a clever mild-hybrid system that should produce power and economy savings even the most traditional of pickup buyers can’t argue with.

As you might expect, Ram is sparing no expense in hyperbole. The new Ram 1500 is the most durable, most aerodynamic, and best riding pickup in the segment, so the claims go. Maximum payload is up, to 2,300 pounds, while maximum trailer tow rises to 12,750 pounds. There’s class-exclusive air suspension for better fuel efficiency and ride, not to mention greater ability off-road. 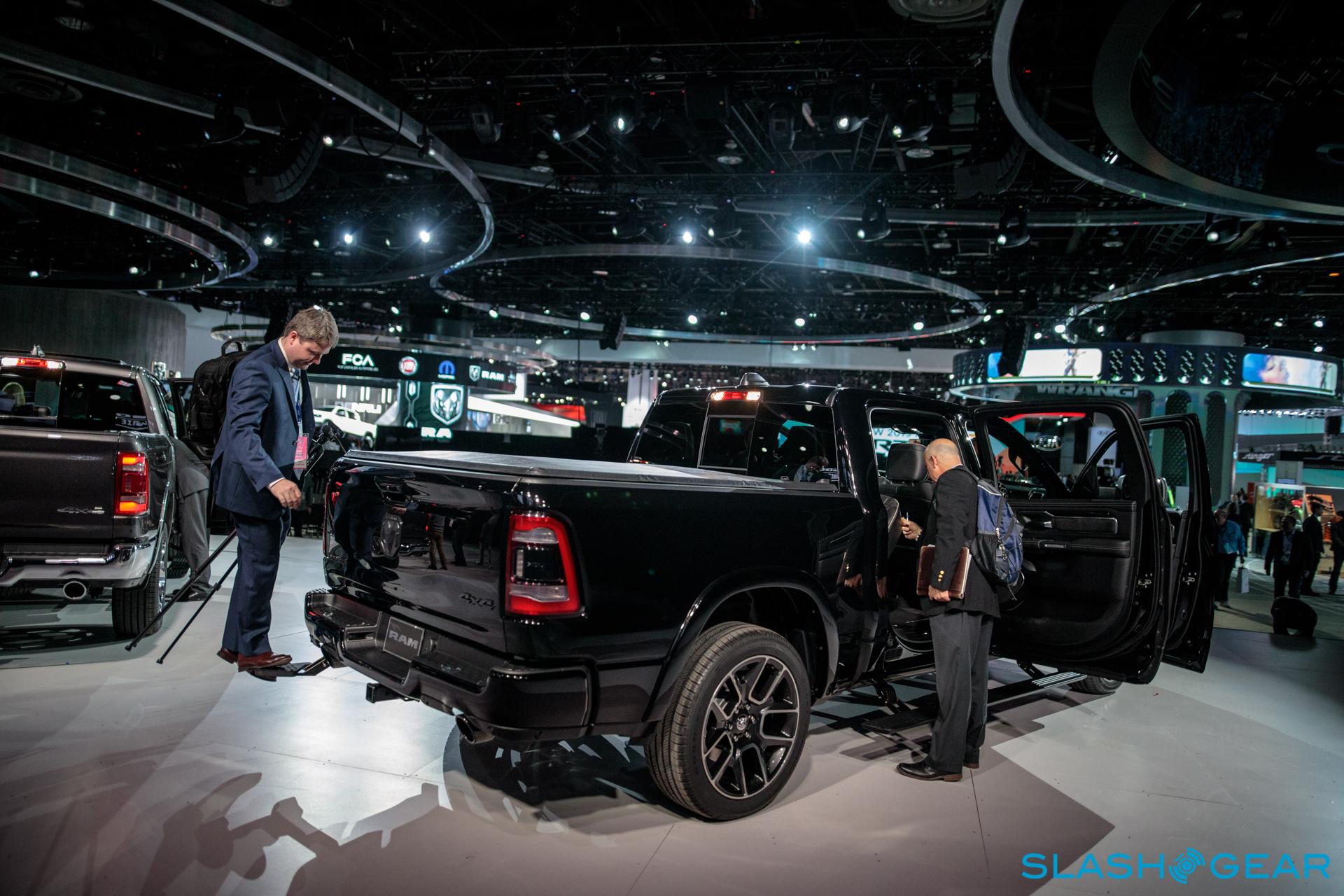 It’s the powertrains where things really get interesting, though. The second-gen 3.6-liter Pentastar V6, and the 5.7-liter HEMI V8, are both now mild-hybrids. Ram has used a 48V battery pack and a belt-drive motor generator unit, which takes care of the truck’s stop/start function, short term torque assistance, and brake energy regeneration. Indeed, eTorque – as Ram is calling it – can add up to 90 lb-ft. to the 3.6-liter, and up to 130 lb-ft. to the 5.7-liter.

Meanwhile, there’s a new TorqueFlite eight-speed automatic transmission, and a new electronic locking rear differential. The latter is now standard on the 4×4 Off-road Package and Rebel, are now available across all models. Frequency response damping is used on the Ram 1500’s shocks, allowing for more aggressive damping during cornering and aggressive braking, but softer damping on rougher surfaces and at higher speeds. 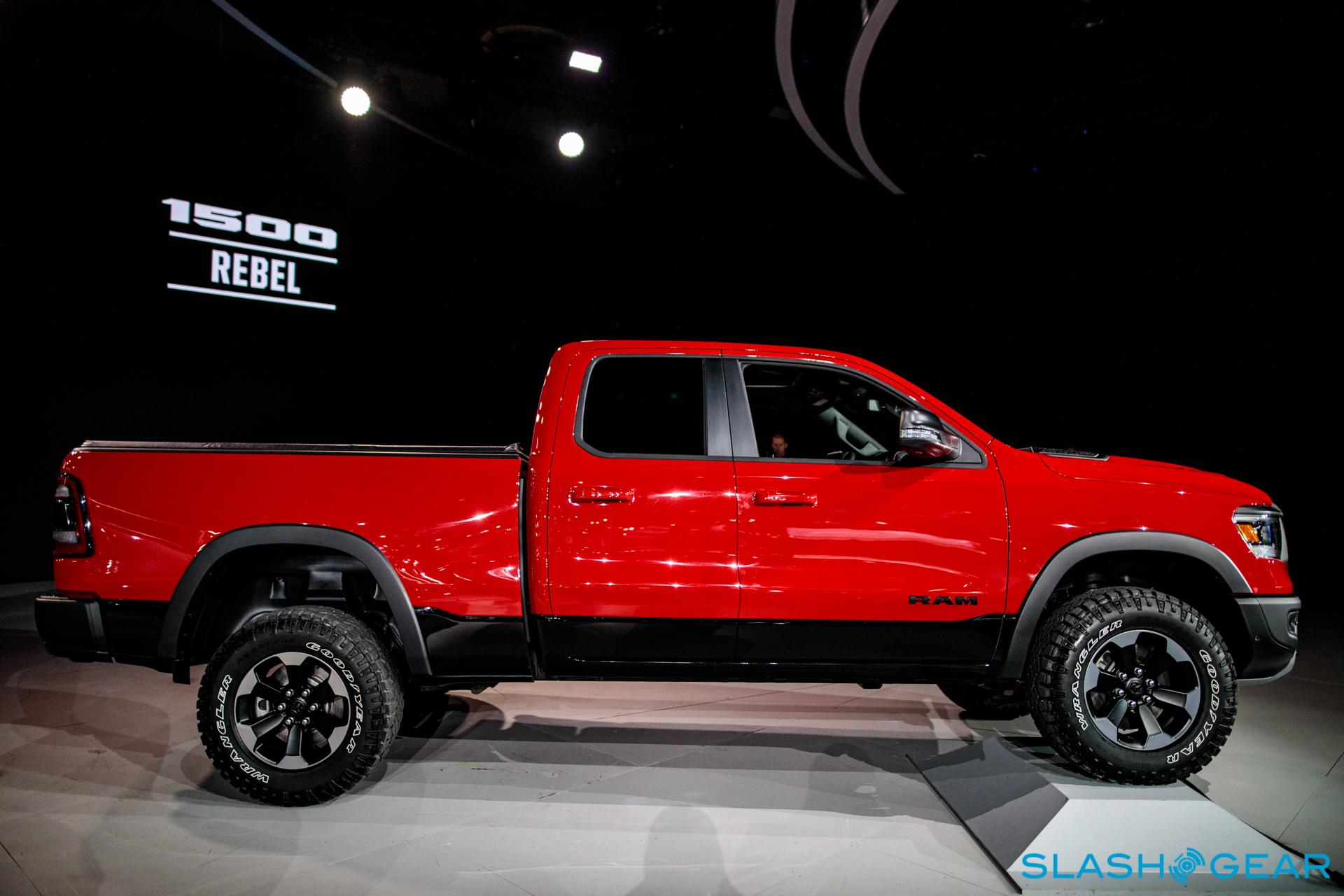 As for the design, it’s a tougher, butcher truck all round. Ram says it has gone to extra efforts to differentiate between the six different trims, but there are commonalities like optional full LED adaptive front lighting, four inches more cab length, 151.1 liters of interior storage capacity, and a second row which has sliding, tilting seats. 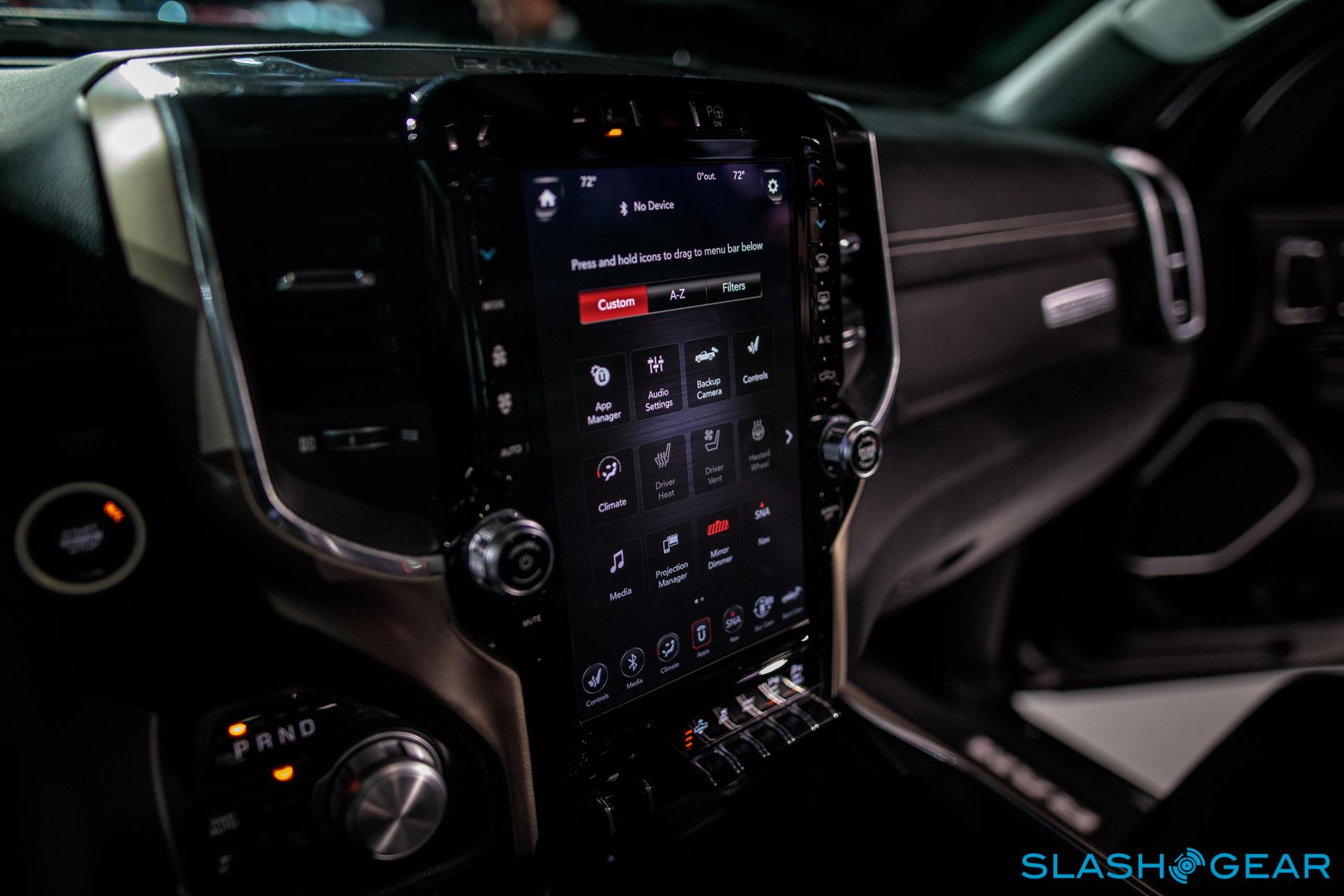 The dashboard is maybe the most dramatic departure from the old pickup, however. There you find a huge, portrait aspect 12-inch touchscreen in the top-spec trim (or a 5-inch or 8.4-inch touchscreen in lower trims) with Android Auto and Apple CarPlay, available 3D navigation and a 360-degree bird’s eye camera system, and the fourth generation of FCA’s Uconnect infotainment software. There’s also the option of a 19-speaker Harman Kardon audio system, mustering a whopping 900 watts and including a 10-inch subwoofer and active noise cancellation. 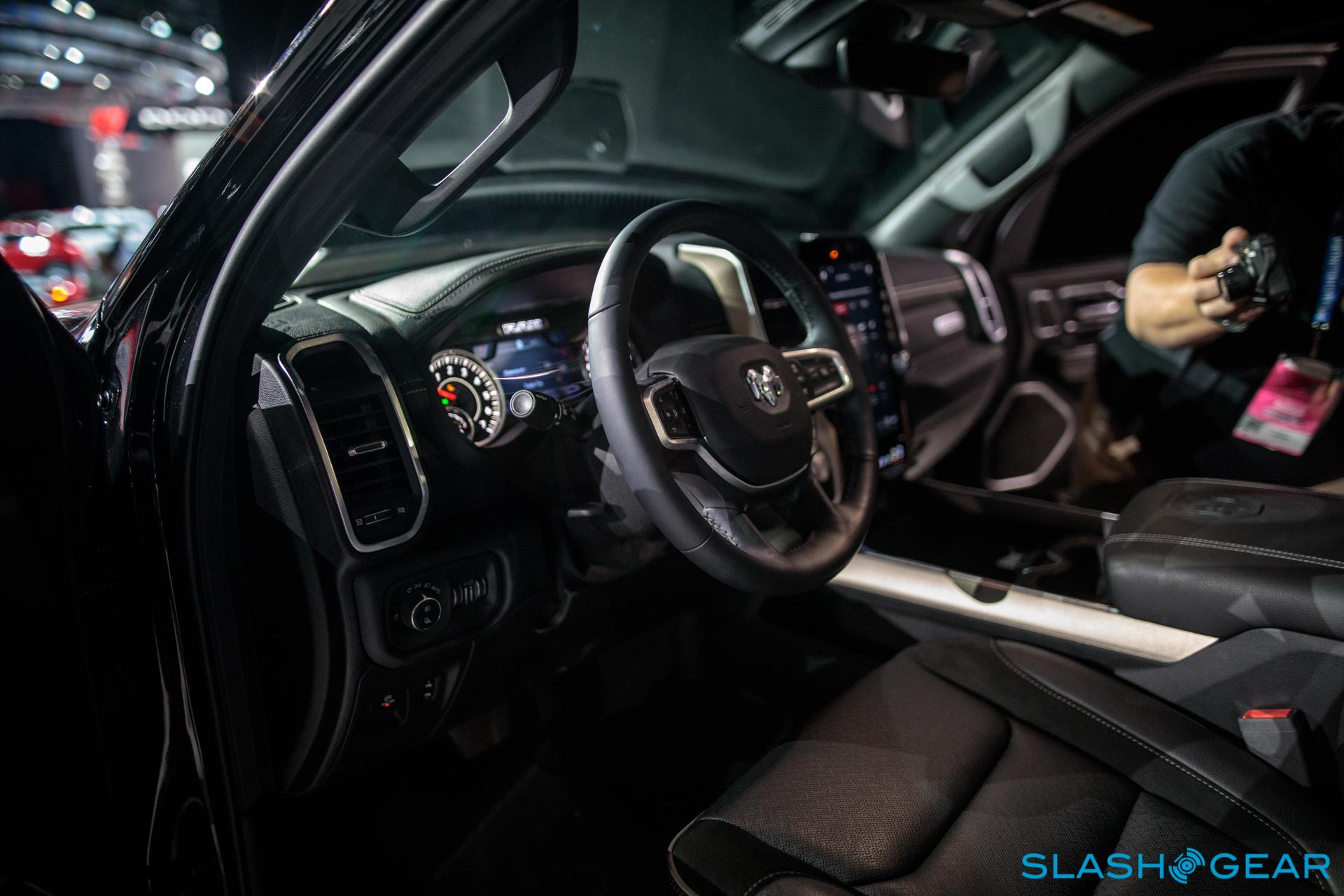 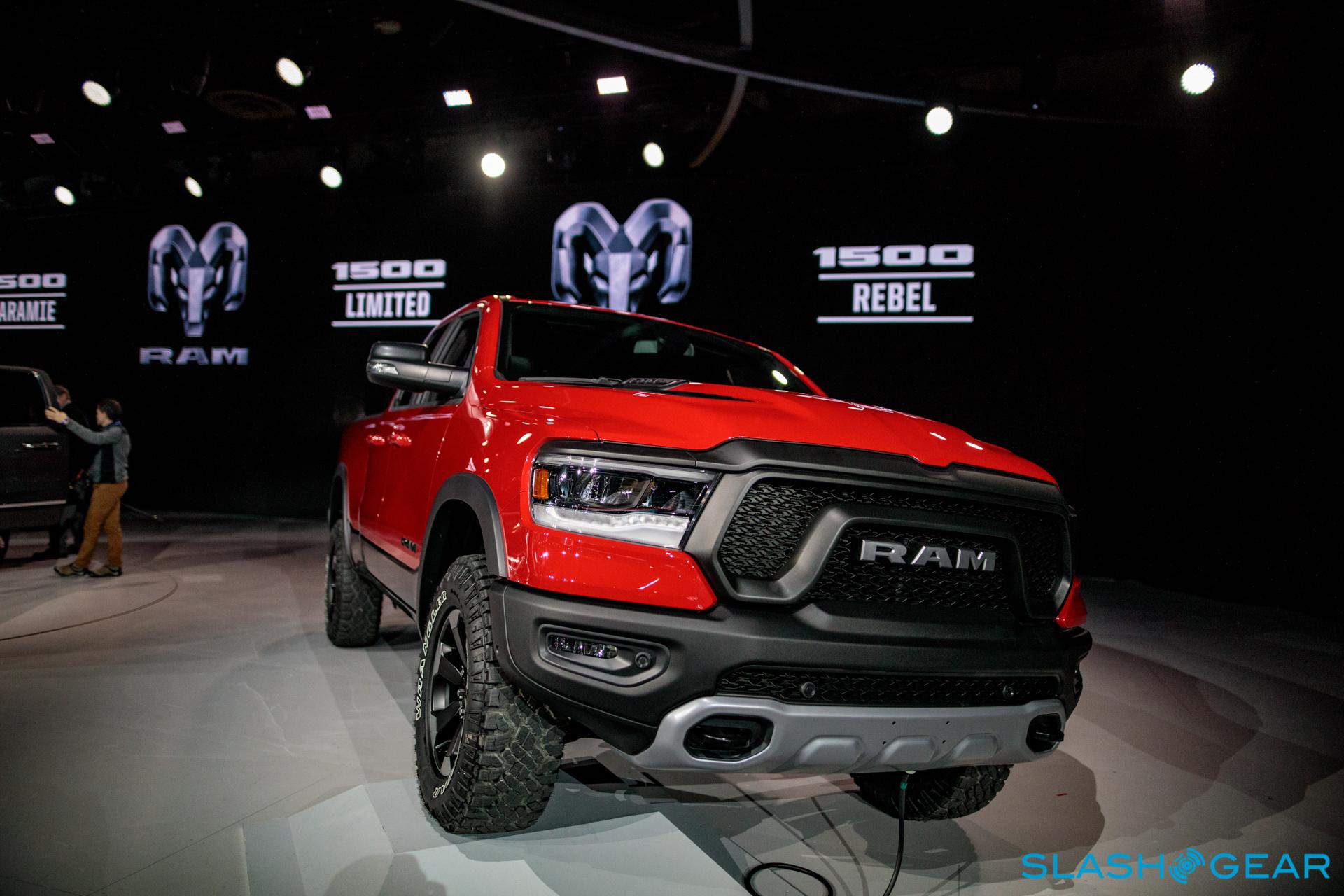