Entry-level luxury cars like the 2019 Mercedes-Benz A220 4MATIC have a fine line to walk. On the one hand, they’re the gateway to an aspirational brand. At the same time, though, Mercedes’ margins get healthier the further up the range you shop: it’s in Stuttgart’s best interest to get you hooked on the three-pointed star and then rapidly coax you into larger, more expensive models.

The cynical driver, therefore, accepts that corners are probably going to be cut. Make an entry-level car too good, after all, and you run the risk of delaying those upgrades. Nonetheless, Mercedes can’t afford to sacrifice so much that the A-Class’ $32,500 starting price starts to feel outlandish. 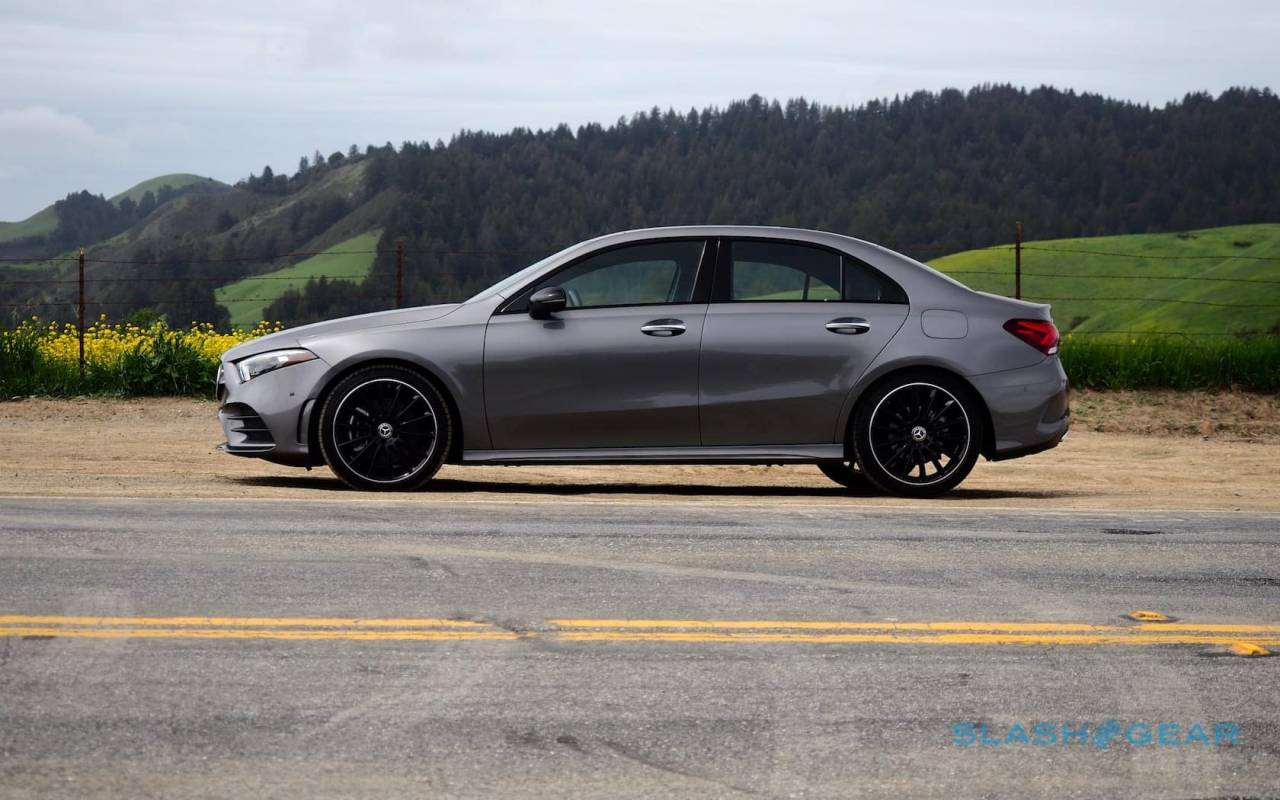 Some questioned the new sedan’s existence given Mercedes also has the CLA, but in the metal the baby four-door makes its argument well. It’s compact and punchy, as you’d expect, but perfectly proportioned with it. The grille, lower fascia, and squinting headlamps give it the right amount of snarl at the front, while the rear – though a little Mazda-esque from some angles – has a tautness that’s pleasing.

Mercedes had added the $2,600 AMG Line package, which adds different bodywork, lowered suspension, the chrome-finish diamond-block grille, and perforated front brake discs to this review car. $500 AMG black multi-spoke 19-inch wheels look the part, too. Together they make the A Class a little more youthful, bridging the gap between a C-Class and a CLA, and to my eyes besting both in the process. 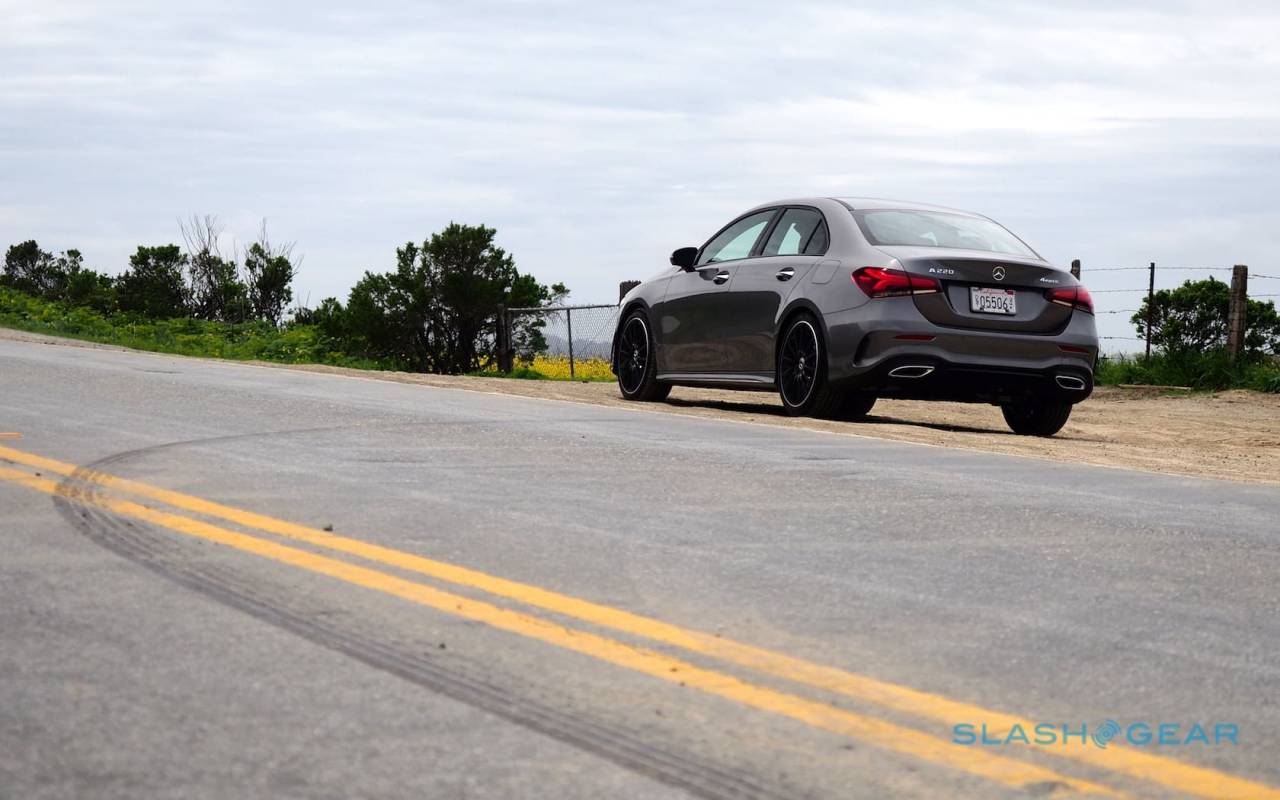 Power is down compared to the latest CLA, but the A220 4MATIC is a lesson in how there’s more to performance than the numbers on paper. In theory, the 188 horsepower and 221 lb-ft of torque from its 2.0-liter turbocharged engine might seem underwhelming, as could the 7.1 second 0-60 mph time. From behind the wheel, though, it never pans out that way.

Don’t get me wrong, the thought of the 2020 Mercedes-AMG A35 sedan with its 302hp has me mighty curious. The A220 4MATIC, though, is unexpectedly sprightly. It’s a clear case of the right powertrain for the right car: I never felt like I was lacking in power, the seven-speed dual-clutch transmission both smooth and never reluctant to downshift when required. 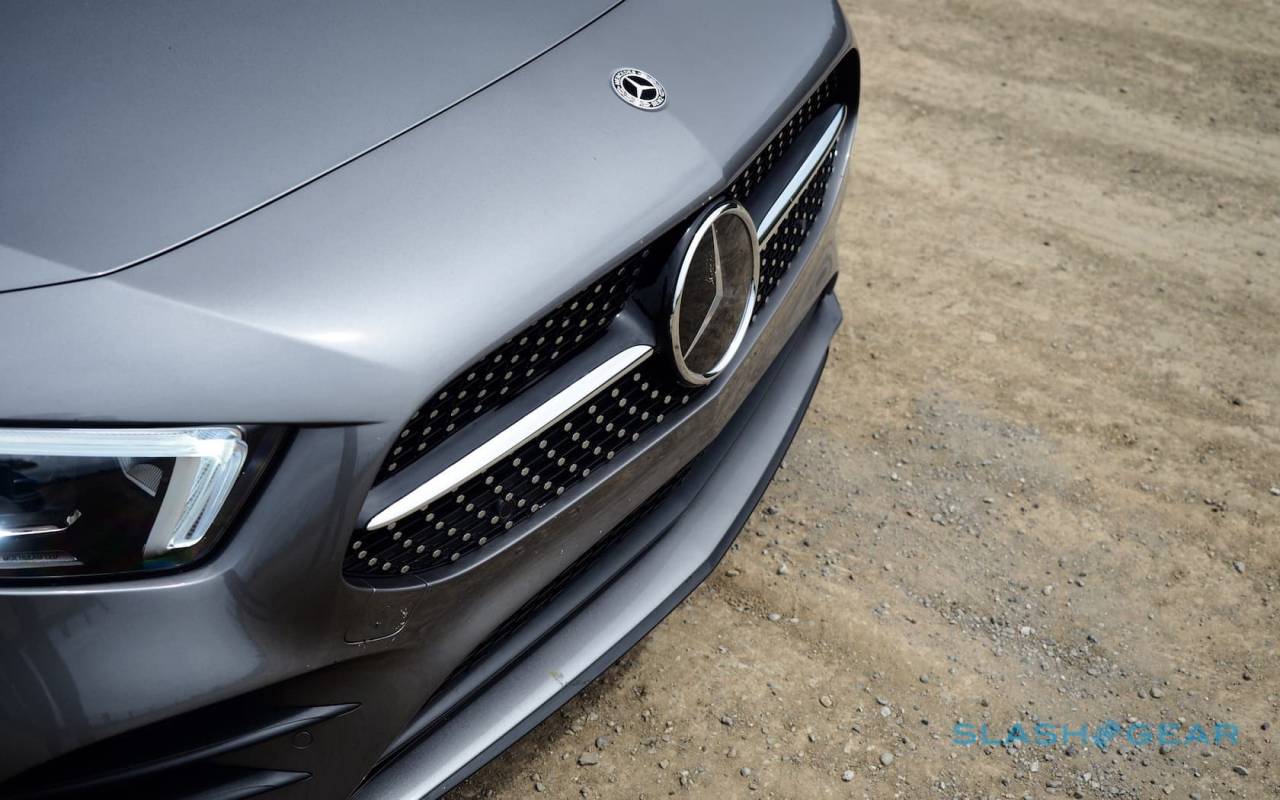 The 3,417 pound curb weight helps – a smudge lower than the A3 in Quattro form – as does the small footprint. While the A-Class may look like its bigger sedan siblings at first glance, it’s a far more manageable car in tight corners. The 4MATIC all-wheel drive lends confidence, and even in Comfort mode and with no air suspension on offer, it feels planted and controllable.

Factor in steering with just the right amount of weight, and you end up with a car that can be more entertaining to drive than its siblings twice the price (and considerably larger). Even at slower paces, though, you quickly come to appreciate the cabin. 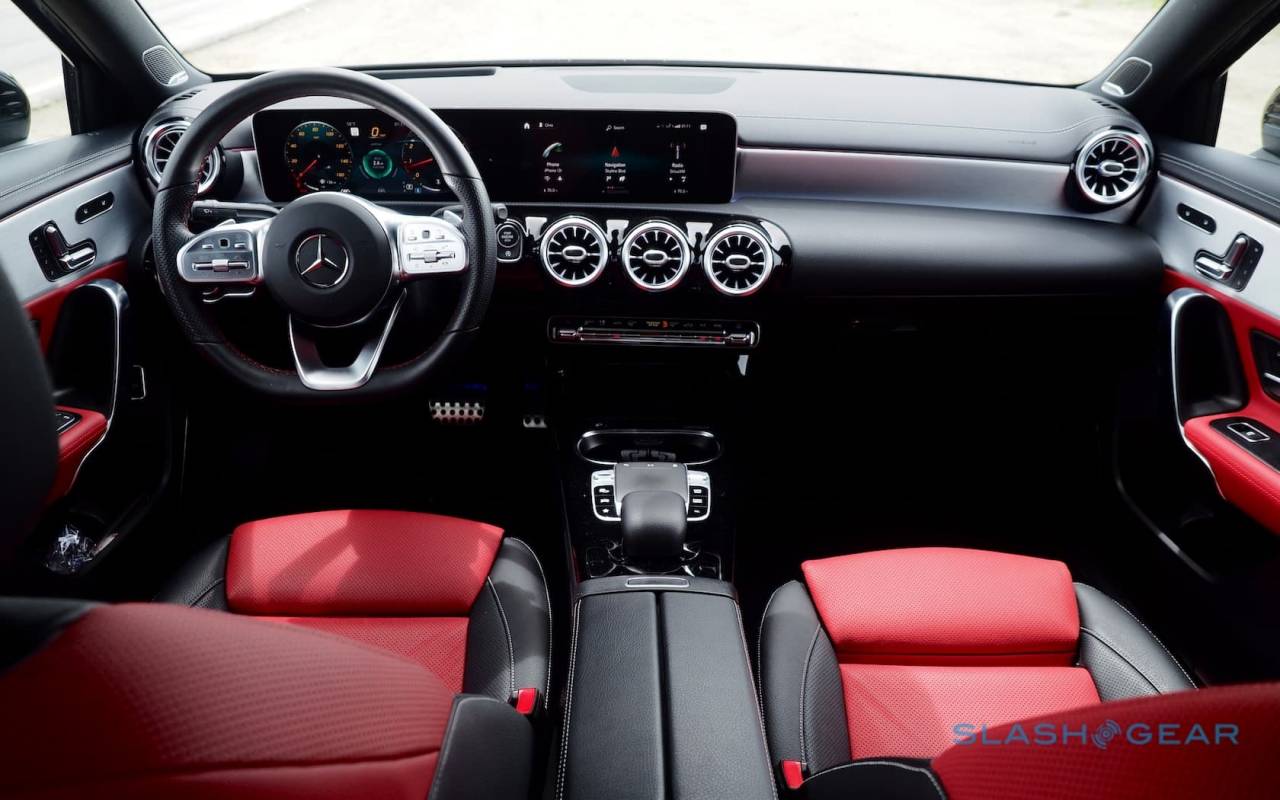 Never mind its segment, the interior of the A-Class is one of the nicest places you can spend your time in a recent car, period. Again, the feel is at odds with the specs: while you do get more rear headroom than in a CLA, the A220 still isn’t exactly overwhelming with space. However the design of the dashboard and the large greenhouse leave it feeling airier.

It feels as good as it looks, too. Mercedes’ materials game has taken a huge step up, and where previous entry-level cars from the automaker felt like they settled for a cheaper parts-bin, the same doesn’t hold for the A220 4MATIC. Switchgear that wouldn’t feel out of place in an E-Class, along with dual displays perched atop the center console, should give Audi and BMW pause. 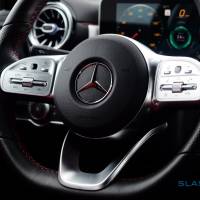 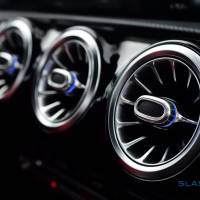 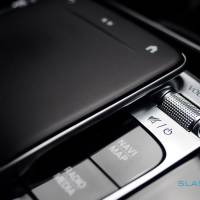 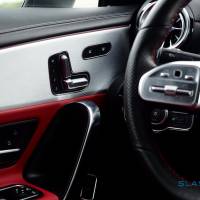 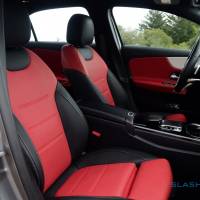 Twin 7-inch screens – one for the driver’s instrumentation and one for the infotainment and HVAC – are standard, but twin 10.25-inch upgrades come as part of the $2,100 Premium Package. That’s a worthy addition, as it also includes blind spot warnings, keyless start, and auto-dimming for both the rearview and side mirrors. $310 adds the 64-color ambient lighting system and, while that may seem excessive, the way it so thoroughly lifts the interior makes it a must-have too. 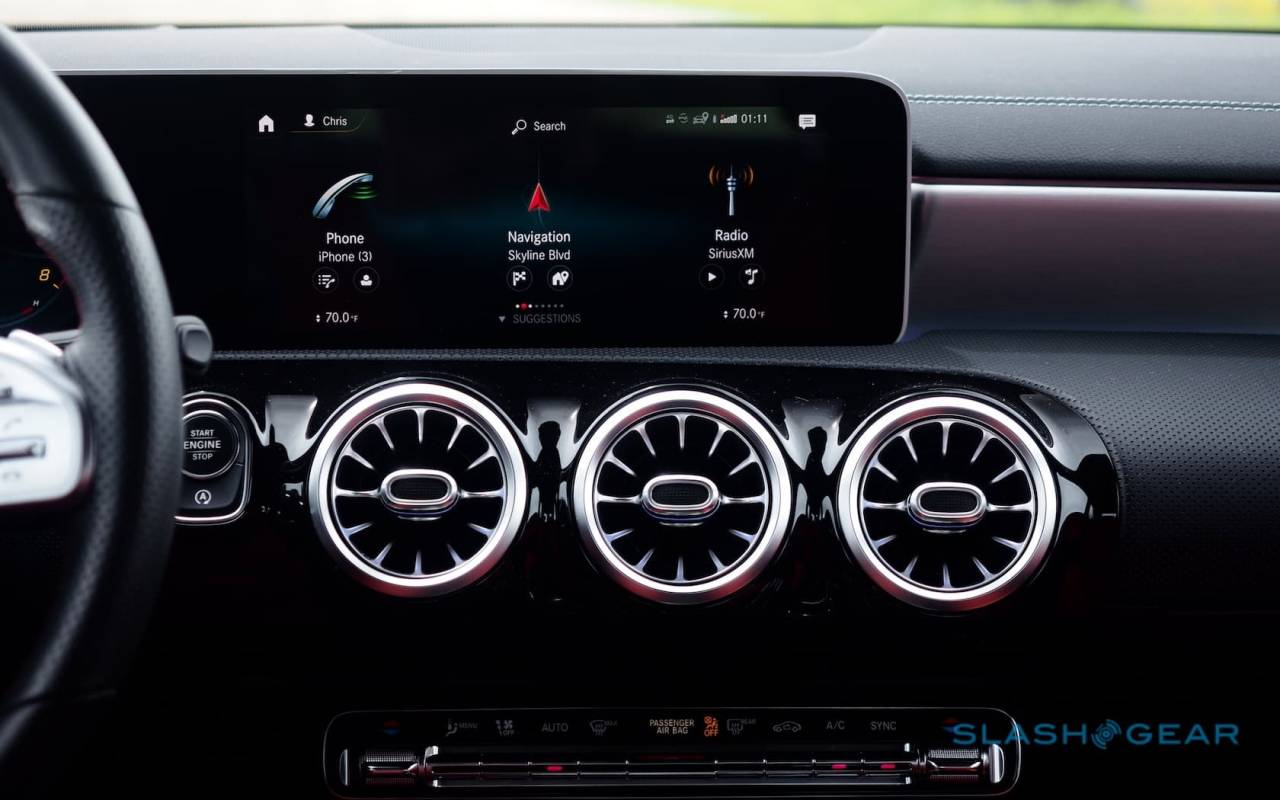 Further upending the usual rules about which cars debut which new features, the A-Class is also first to bring Mercedes’ new MBUX infotainment system to market. While it cleans up the UI and generally leaves the menus less confusing than the old version, the biggest change is the “Hey Mercedes” smart assistant. Think of it as Alexa for the car.

I’m generally wary of in-car voice recognition systems. Even when they manage to handle my British accent, they’re usually so convoluted a process getting anything done, you’re better off going to old-fashioned way with buttons and touchscreens. The Mercedes assistant, though, was a pleasant surprise. 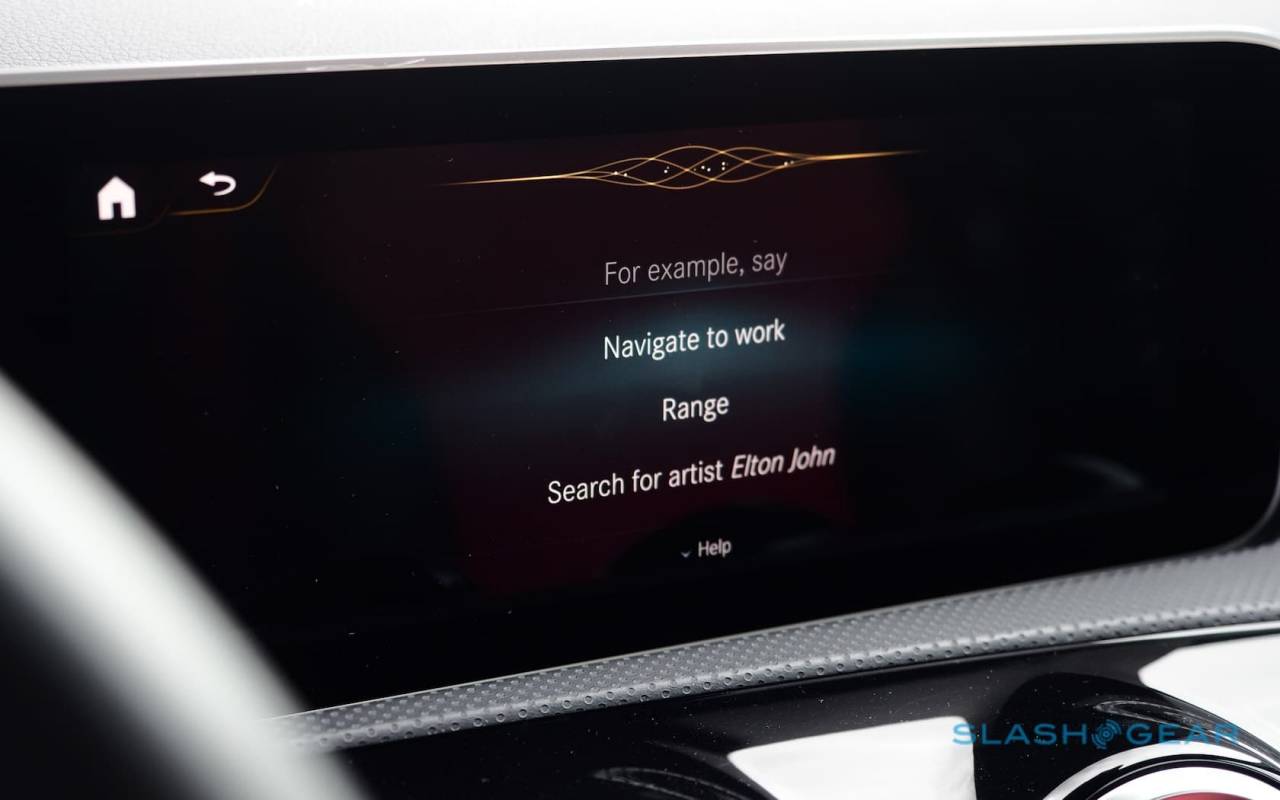 You can issue navigation instructions in several ways, either calling out the whole address – which the car seamlessly understood – or asking for a more general search, like the nearest Starbucks. MBUX doesn’t demand specific command language, either: I could say “navigate to…” or “get me directions to…” or whatever seemed most natural. Follow-up commands, like searching for a gas station along an existing route, can often be near-impossible to do with voice control systems, but were no issue in the A220.

Like Alexa, meanwhile, you can ask general knowledge questions. That may seem like a gimmick, but actually proved to be pretty useful: queries that would typically require my pulling out my phone to get the answer to, I could do more safely by voice. “Hey Mercedes” also ties into the car’s HVAC and other systems, so you can do things like adjust the temperature by voice, too. 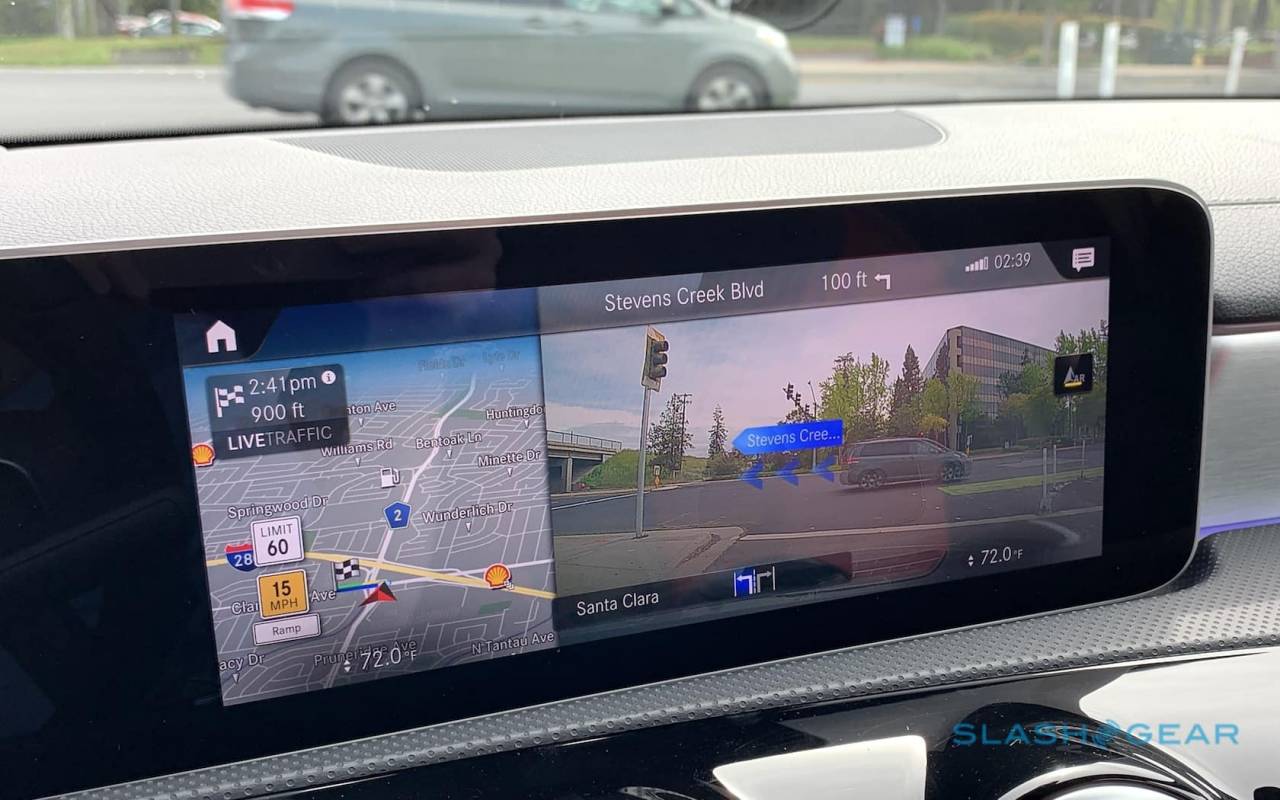 It’s not the only geeky feature I found unexpectedly rewarding. The optional augmented reality navigation system – part of the $1,150 Multimedia package – floats turn-by-turn directions over a real-time view of the road ahead, and proved surprisingly helpful when trying to figure my way through unfamiliar routes. Sadly it can’t actually project those AR directions onto the windshield, but it’s not hard to imagine a future version that might. 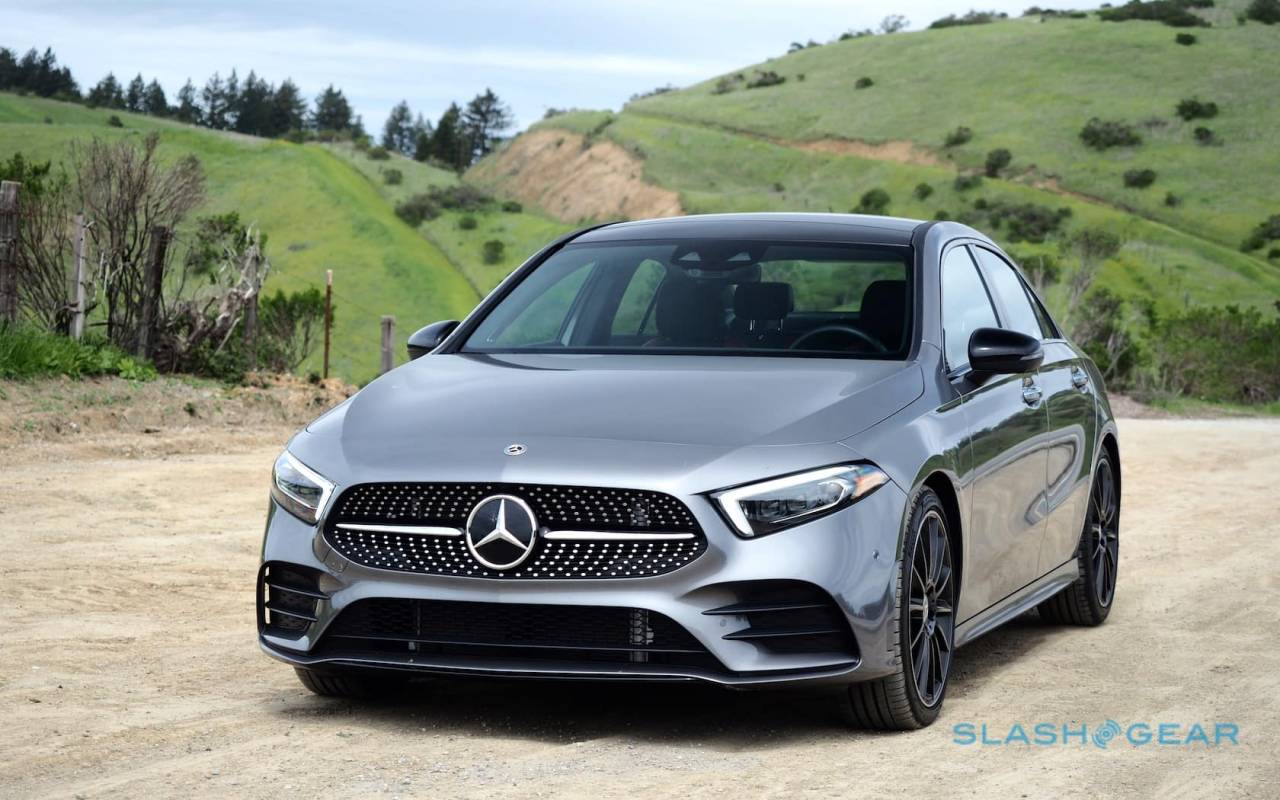 If it wasn’t already clear, I was far more impressed than I expected to be by the 2019 A-Class. My suspicion had been that it would be a fairly calculated car, effectively a way to lure new owners to the brand but then quickly propel them up the ladder to more expensive models.

Instead, I find myself asking whether it could actually steal a few entry-level C-Class sales. If you want the Mercedes badge, and the styling, and the luxury tech interior, but don’t actually need all the rear space of the larger sedan, there’s a lot to recommend this smaller, nimble car. Sure enough you can send its price spiraling up if you go heavy-handed on the options, but demonstrate a little restraint and you can still get a decently-equipped sedan at a fraction of the price of Mercedes’ larger cars. That’ll teach me to be so cynical.