This is it: one of the most iconic nameplates in trucks has returned to the US, with the covers taken off the 2019 Ford Ranger at the Detroit Auto Show today. Aiming to take a bite out of the midsize truck market, it’s a slice of F-150 ability in a more urban-friendly package. All the same, Ford knows well enough that you can’t count solely on nostalgia for sales.

Indeed, the original Ranger built its loyal following by virtue of its rugged talents, and so that’s what Ford is focusing on this time around, too. A high-strength steel frame underpins an all-new exterior design, each “torture-tested,” Ford insists, alongside the best-selling F-150. The Ranger also borrows some of the full-size truck’s running gear.

That’s the 2.3-liter EcoBoost engine, a turbocharged gas engine with direct fuel injection. For the Ranger, it’s paired with a 10-speed automatic transmission as standard. No power or towing load numbers yet – we’ll have to wait a little closer to launch for those – but Ford is promising torque on a par with a V6 but with the efficiency of a four-cylinder.

Of course, much of the Ranger’s appeal is wrapped up in its design, and there Ford has skirted both close to nostalgia while making some departures. The steel front and rear bumpers are mounted to its frame, while the high belt line, raked grille and windshield, and short overhangs both look suitably purposeful while helping with things like clearing obstacles.

The tailgate is designed for both cargo and people, with an optional integrated trailer hitch. Although the regular model’s ground clearance is said to be decent – again, we’ll have to wait for final numbers – there’ll be a Ranger FX4 Off-Road Package that will bump up the trail potential even more. That’ll include off-road-tuned shocks and all-terrain tires, together with a heavy-gauge steel front bash late and skid plates both mounted to the frame, and FX4 badging. 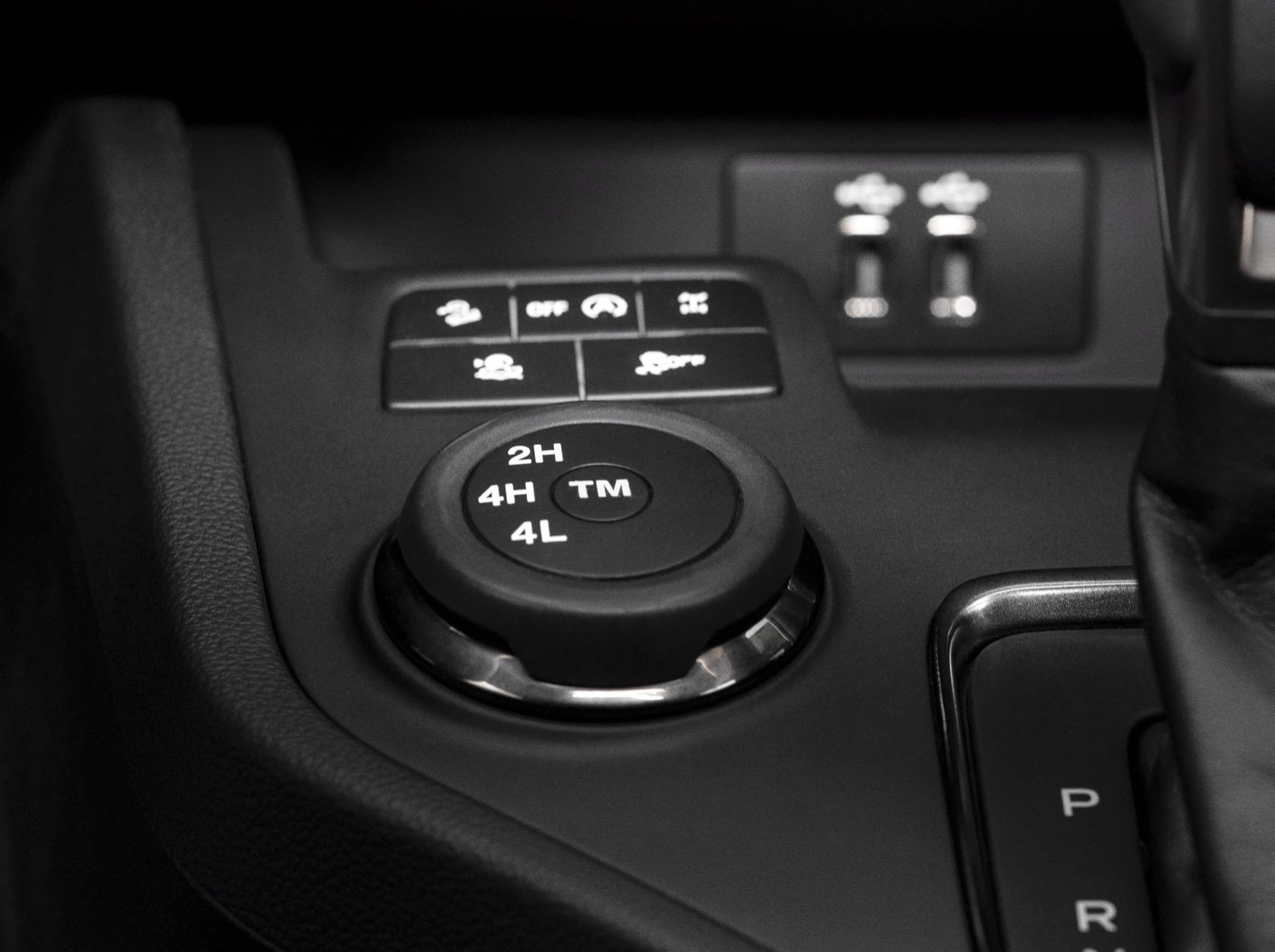 It’ll also come with the Terrain Management System, similar to what’s offered in Ford’s beastly F-150 Raptor sports truck. That has four drive modes – normal; grass, gravel and snow; mud and ruts; and sand – that can be flipped between while the Ranger is in motion. Each will have its own throttle and transmission mapping, together with adjusting factors like traction, drivability, and performance.

In addition, it introduces a new feature to Ford’s range. Dubbed Trail Control, it’s effectively cruise control but for off-road use. Intended for low-speed and tricky terrain, it handles acceleration and braking for each wheel individually, leaving the driver to focus on steering. 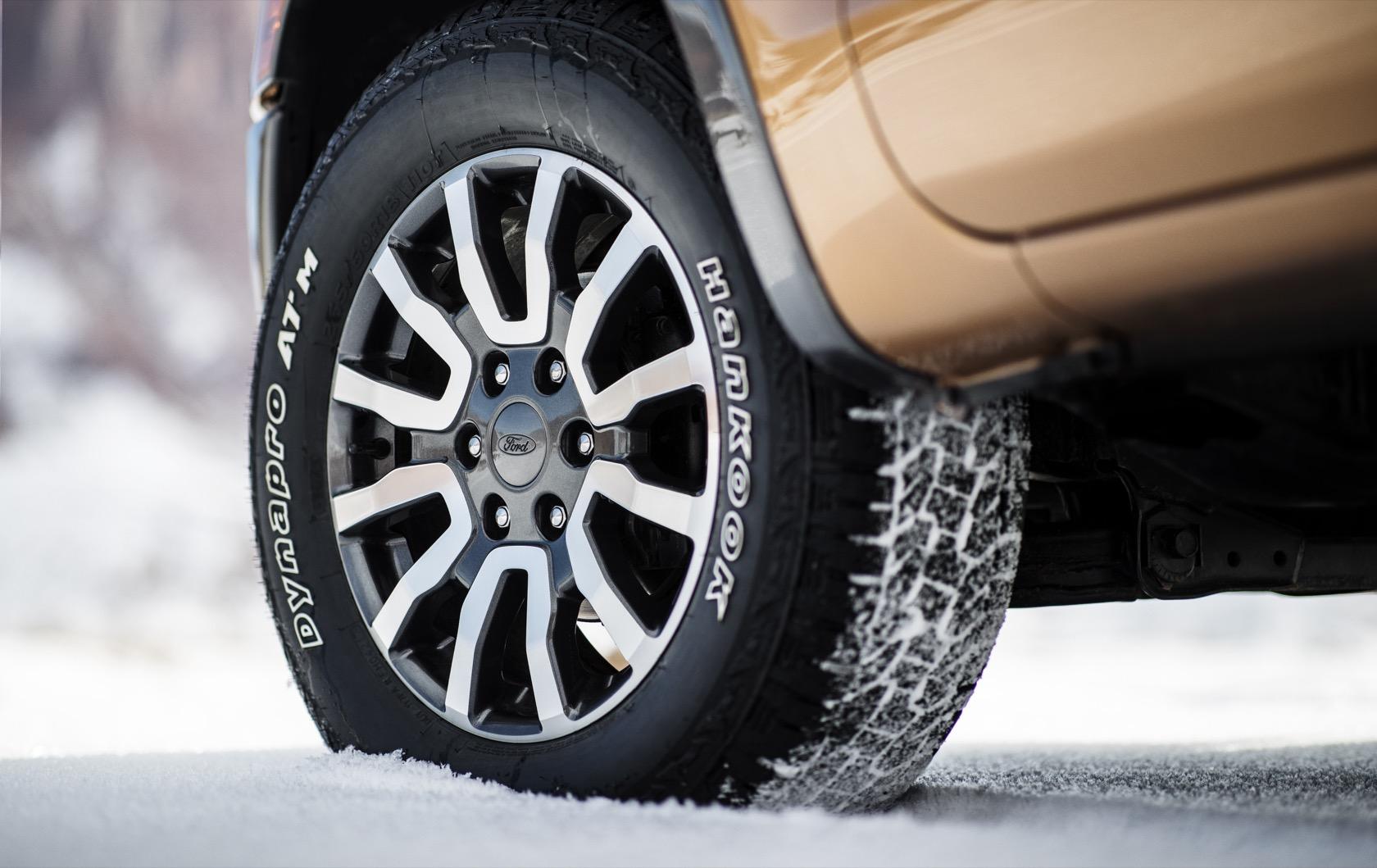 Both 2WD and 4WD Ranger models will be available, each with Dana Trac-Lok differentials. An electronic-locking rear differential will be standard on the FX2 and FX4, and optional on all other models. The 4WD Ranger will have 2-high, 4-high, and 4-low as standard. 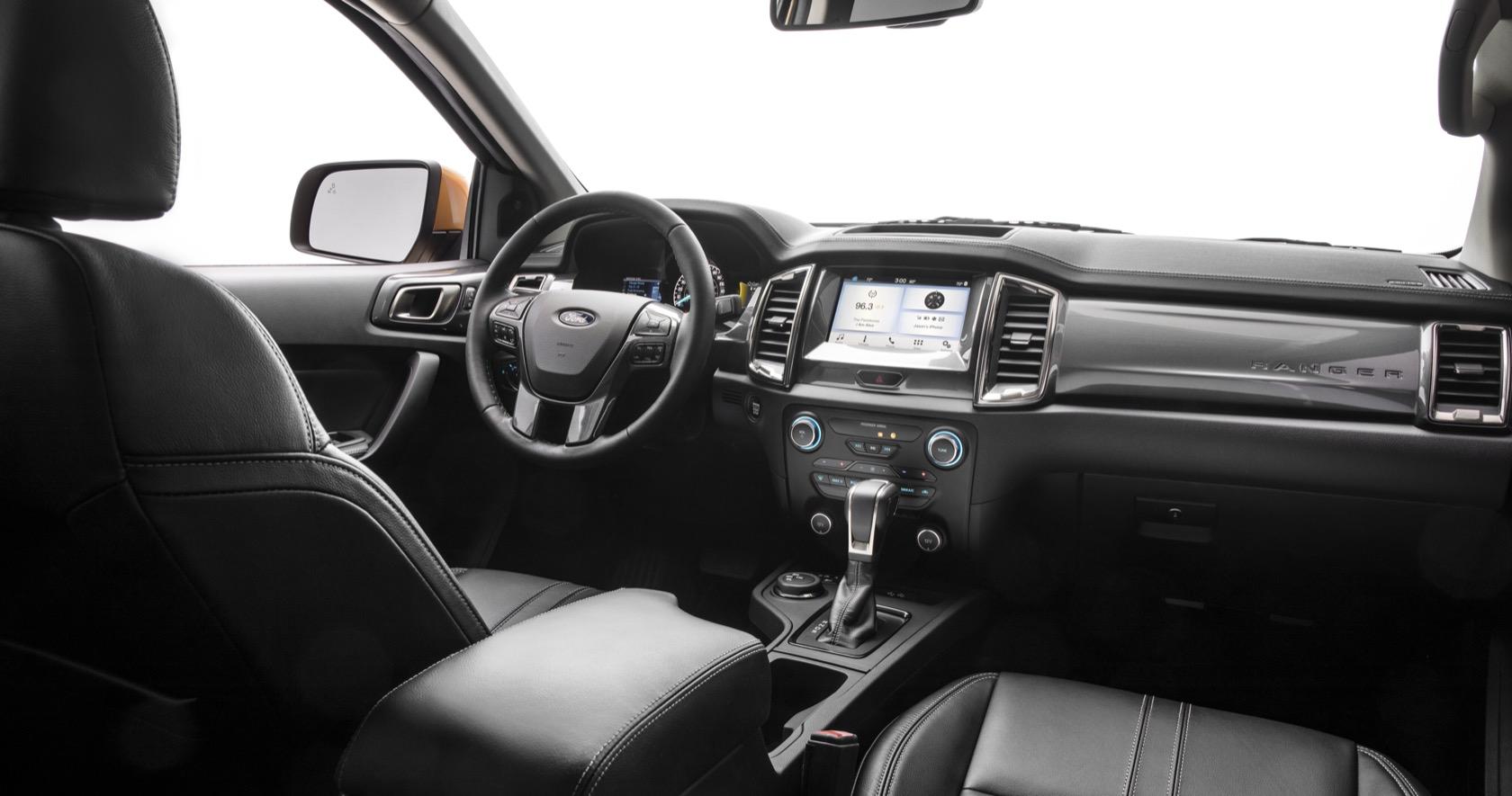 Inside, there’s space for five and cargo. SYNC 3 with its 8-inch touchscreen, Apple CarPlay, and Android Auto is optional, while the driver gets dual-LCD info screens that show things like real-time vehicle information, navigation, and audio settings. In a departure from the original Ranger, the 2019 truck will have plenty of driver-assistance tech too. Automatic Emergency Braking is standard, while lane keeping assistance and departure warnings, a reverse sensing system, and blind-spot warnings with trailer coverage are standard once you get to XLT and Lariat trim. 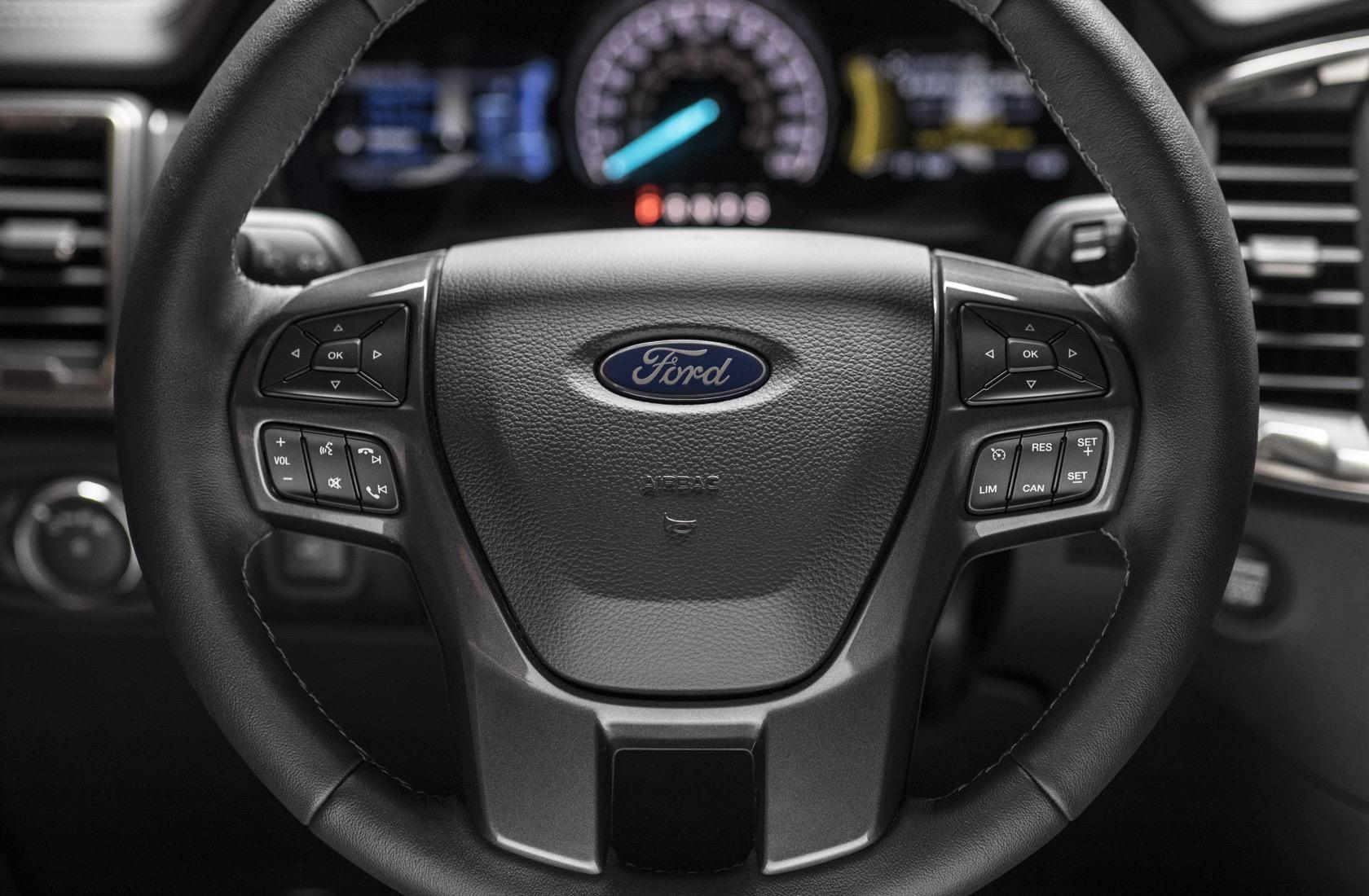 The 2019 Ranger Lariat also throws in pre-collision assistance with pedestrian detection, together with adaptive cruise control. Other options across the range include onboard LTE with WiFi hotspot support for up to ten devices, AC power and USB outlets, and a B&O PLAY premium audio system. Outside, there’s the choice of LED headlamps and taillamps, together with puddle lamps and lighting for the cargo bed. Ford’s Smart Trailer Tow connector can warn about mis-connected trailer links. 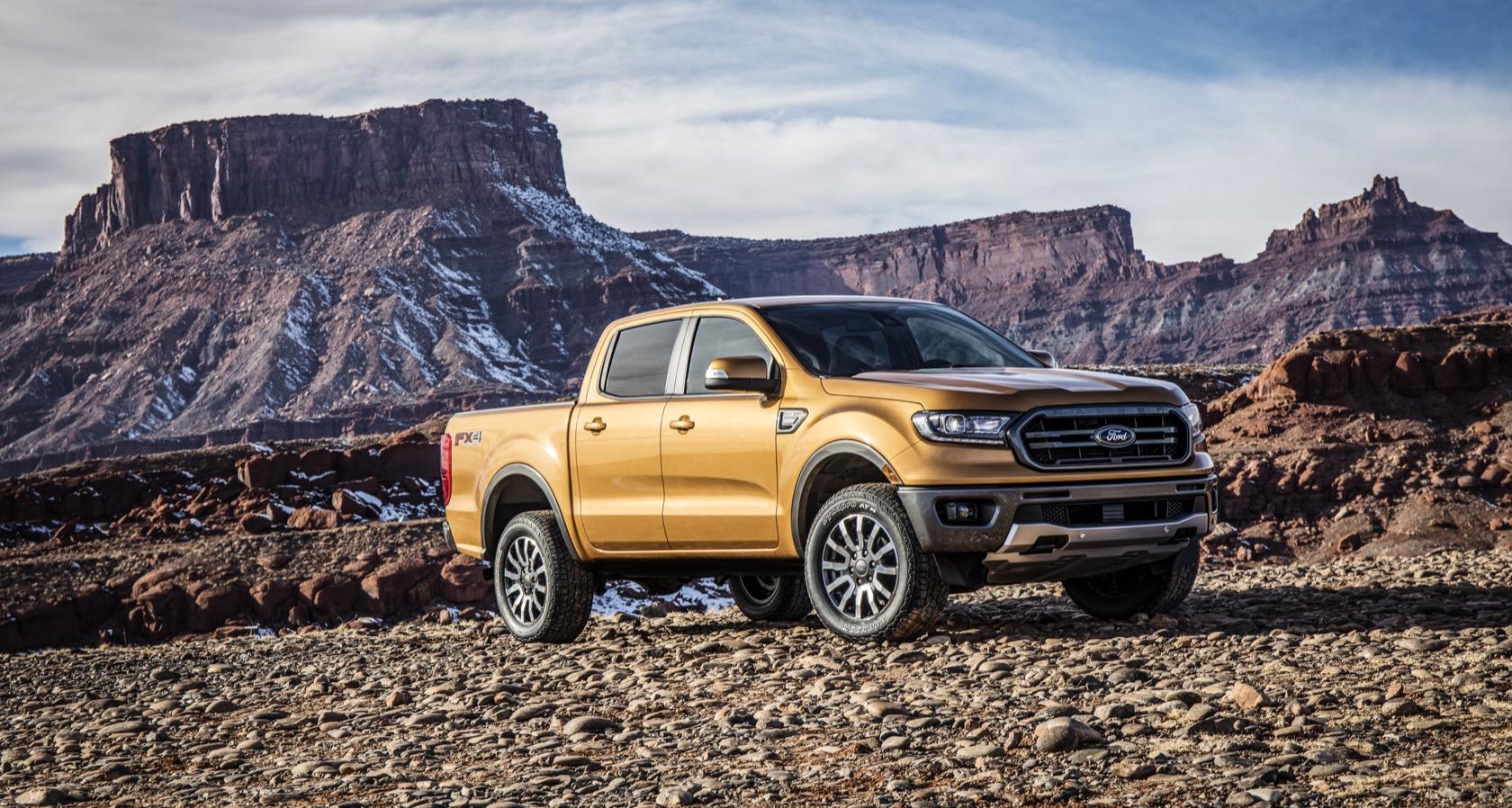 The 2019 Ranger will start out in XL trim, stepping up through XLT and then Lariat; both SuperCab and SuperCrew cab configurations will be offered. There’ll be Chrome and Sport appearance packages, plus the FX Off-Road package. Pricing will be announced closer to the truck’s release early in 2019, with production kicking off at Ford’s Michigan Assembly Plant later this year.