When I got the chance to test drive the new Audi e-tron in the deserts of Namibia, it was clear Audi hadn’t developed an electric SUV merely for tarmac roads. While most drivers won’t experience it, it turned out to be quite the thrill to drift an electric SUV. Indeed as far as I can remember, it’s probably the most fun I’ve had behind the wheel of a luxury SUV.

The 2019 e-tron SUV is a hugely important vehicle for Audi, but you wouldn’t necessarily know it at first glance. If you’re used to the crisp, stoic design of Audi vehicles, you’ll find the clean lines and relatively subdued styling to be one of the strongest points. Here is an electric vehicle that pretty much resembles a conventional SUV, or any other Audi you see on the lot. There are no weird quirks to make it stand out, and that’s not a bad thing to have in an electric vehicle trying to coax mainstream drivers away from their gas-guzzlers.

Then again, there’s a part of me that wants at least a touch of quirky styling to set the e-tron apart from everything else out there. I’m not talking about falcon doors – Tesla got there first with the Model X – or a power dome hood. The new e-tron sits between Audi’s Q5 and Q7 in size, and there’s no denying the similarities of the e-tron’s styling with the rest of the lineup. It’s to be expected, of course, since the EV is based on the modified MLB Evo platform, which is the same underpinning the Q5.

You can be too conservative in the name of appealing to as broad an audience as possible, however, and for me, it unfairly plays down just how much that’s new that the Audi e-tron brings to the table. Happily, while the exterior styling is safe and subdued, the same can’t be said for the interior. Smaller than a Tesla Model X outside, the Audi can easily accommodate five passengers in the utmost luxury. If there’s one thing that seriously bugs me about Tesla’s most expensive models, it’s the rather humdrum and boring cabins. With the e-tron, you and your passengers are ensconced in an elegant space with plenty of room to move around. 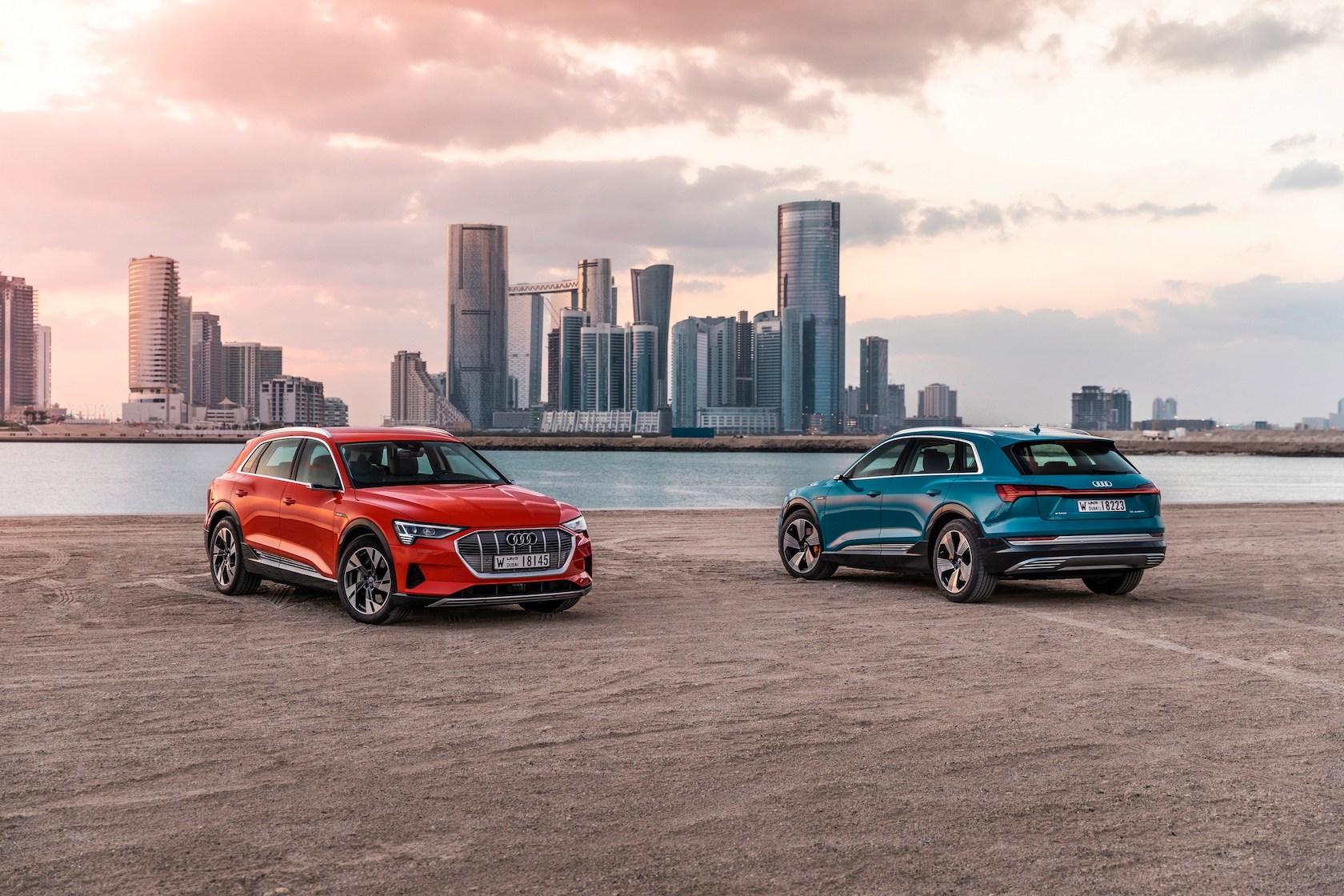 For starters, the Audi e-tron is seriously quiet. And I mean eerily silent to a fault. Even when compared to the quiet and refined comfort of mainstream electric vehicles, the new Audi e-tron nudges ahead in overall refinement. It’s relaxing, soothing, and almost therapeutic. You’ll still hear the indistinct whine of the electric motors at the front and rear of the cabin, but it’s a subdued and unexpectedly pleasant tone. I like the sound of a roaring R8 V10 plus, or the distinct wail of BMW’s M-Series V10, sure, but I’m also beginning to appreciate the hushed yet authoritative whine of perfectly tuned electric motors. 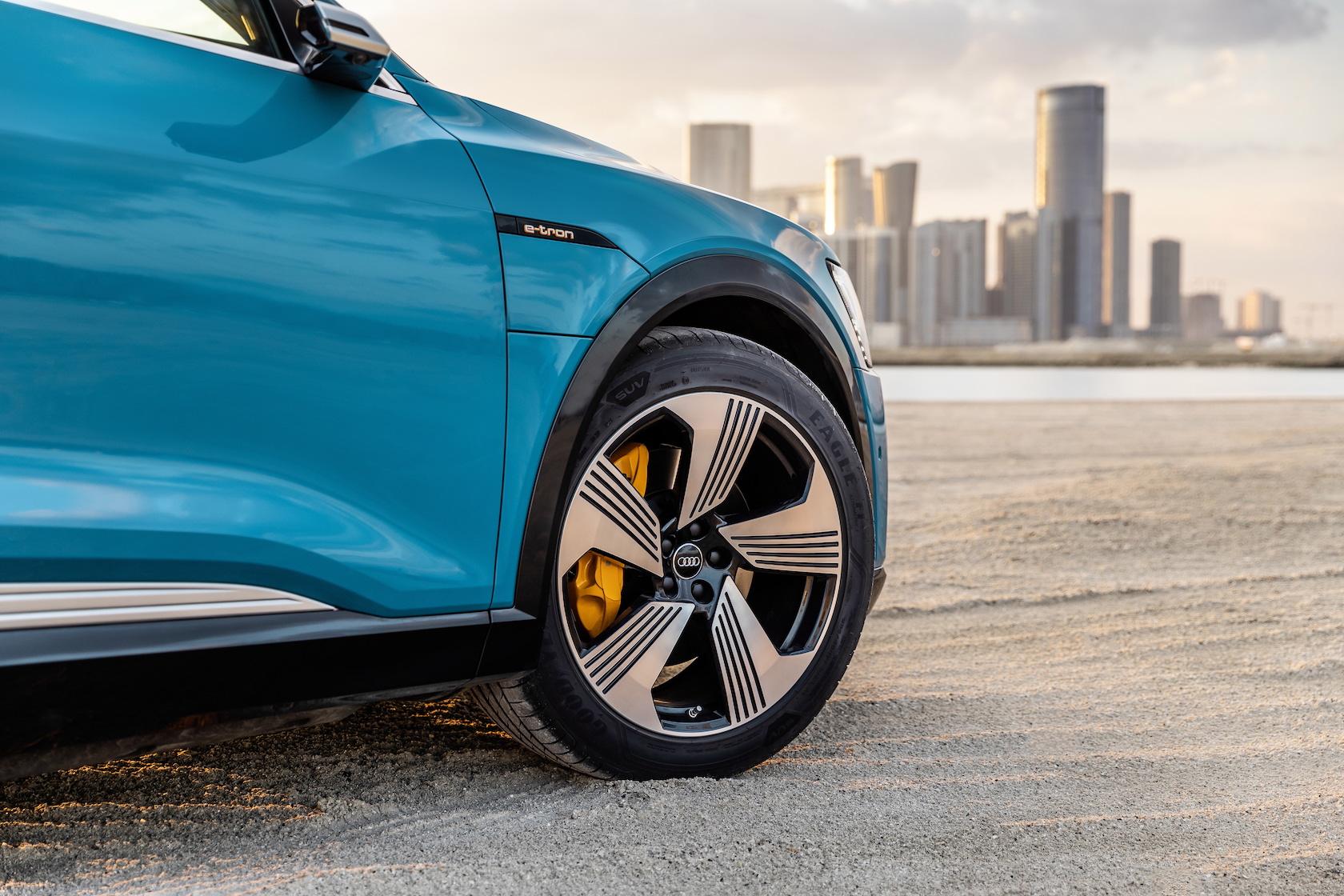 Part of the smoothness of the 2019 Audi e-tron comes from the aerodynamic efficiency of its sculpted body. With a claimed drag coefficient of just 0.27, the e-tron SUV feels effortless to push in an open highway or a twisty long stretch of dirt road with gorgeous sand dunes all around. I didn’t get the chance to test the US version, which will come equipped with traditional glass side mirrors, as Audi’s fleet was outfitted with the sleek camera-based mirrors instead. 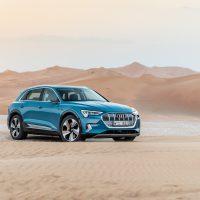 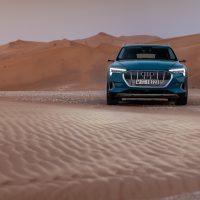 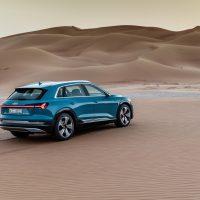 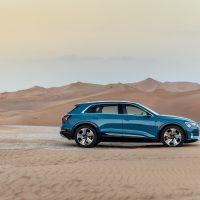 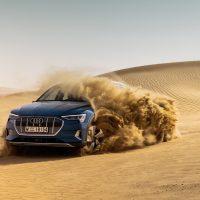 Audi says they’re instrumental in helping with efficiency, responsible for 1.5 miles of extra range alone courtesy of the cut in drag. However, they do require some getting used to since the display is placed lower down inside the door panel compared to where your eyes automatically flick to so as to see normal mirrors. If you’re in the US, though, this is all theory anyway: the $1,000 option is off the table, at least until regulatory changes are made down the road. 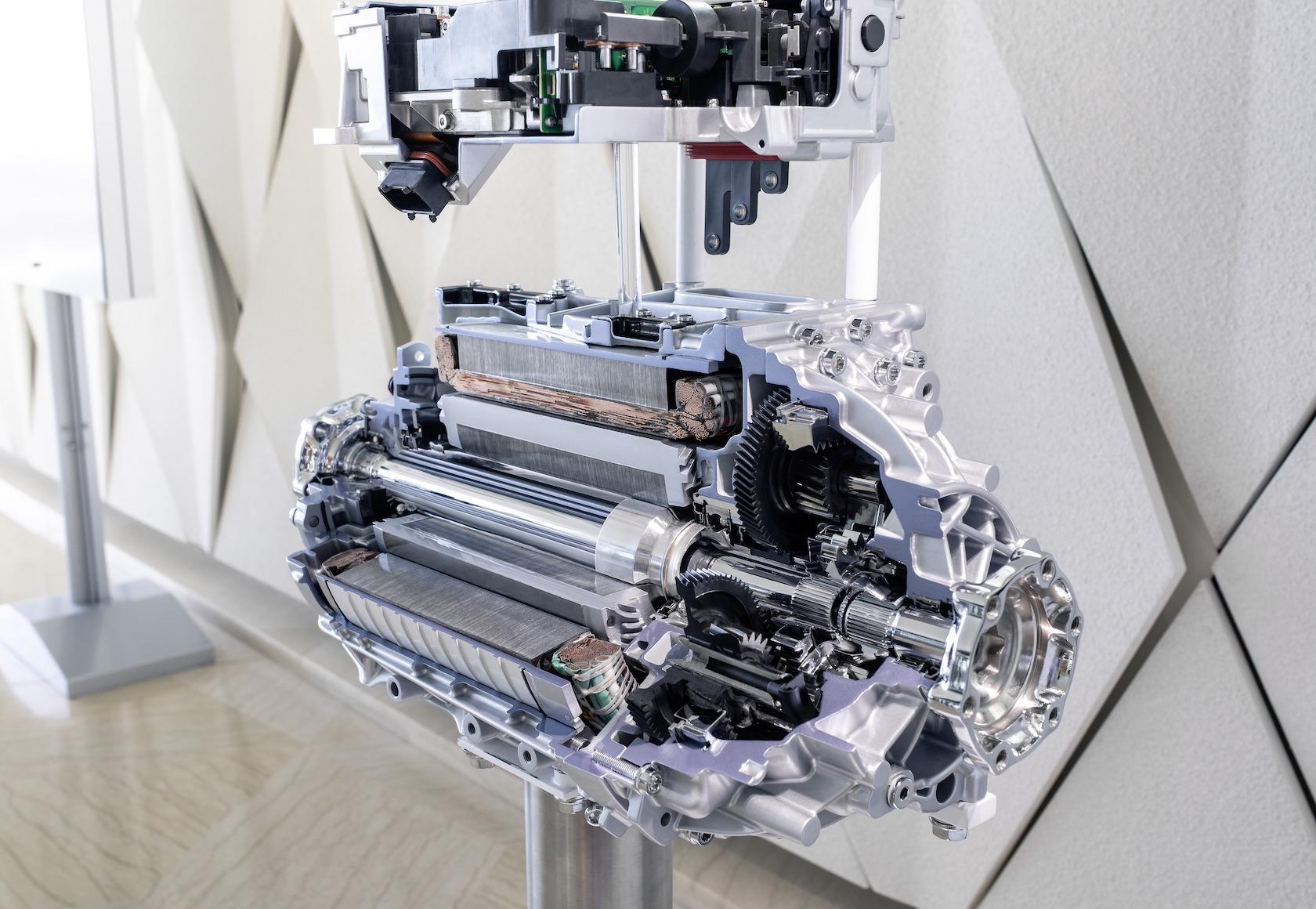 Driving entertainment comes in the form of two electric motors, which are mounted in the front and back of the vehicle. This is where it gets interesting. I’m pretty sure Audi could have equipped the e-tron with a pair of more powerful motors to deliver the neck-snapping acceleration of the Tesla Model X P100D – which can blast from 0 to 60 mph in an unbelievable 2.9-seconds – but they opted not to.

It’s proof you don’t need an ultra-powerful electric vehicle to have some serious driving fun. Push the pedal to the floor and the Audi e-tron SUV will oblige a 0 to 60 mph run in around 5.7-seconds. That’s not bad for an electric SUV weighing in at roughly 5,500 pounds: 330 pounds heavier than the Telsa Model X, and 661 pounds heavier than Jaguar’s I-PACE. The numbers might suggest the Tesla Model X will leave the Audi e-tron in the dust in a head-to-head drag race, but the car feels surprisingly faster than what the official numbers might suggest. It’s not sluggish by any means, the combination of the battery placement and 40:60 torque split doing a fantastic job at masking the weight.

Not only surprisingly quick, but the e-tron also reacts with youthful exuberance. That’s what a combined output of 402 horsepower and 487 lb-ft of torque in Boost mode can do if you’re eager to bury the pedal. Agile when driven in the tight confines of pockmarked city roads, there’s a welcome sporty attitude on the wide-open highway. To be fair, our drive in Abu Dhabi wasn’t the must thrilling for fear of things worse than a speeding ticket; to be safe, we set the adaptive cruise control to 5 kph below the posted speed limit. US cars will get a new driver-attention system, which will use capacitive sensors to track your hands on the wheel rather than forcing you to pull against it.

You shouldn’t feel shortchanged as the roads turn from straight to twisty, either. With a low center of gravity combined with the swift power transfer of the all-electric Quattro drivetrain, you can throw the Audi e-tron SUV into a tight corner without feeling like you’re losing control of the vehicle. Certainly, there’s still a slight hint of nervousness as you approach the apex of the turn – there’s only so much technology can do in the face of physics, after all – but the high-tech drivetrain and torque vectoring should have you exiting the corner feeling like a champ.

The fluidity of the handling is seriously engaging. And indeed this is what I love the most about the new Audi e-tron SUV. I knew beforehand that it could handle a bit of the rough stuff. It’s not a hardcore off-roader, no, and nor is it blessed with the climbing abilities of a mountain goat. Instead, it offers higher than average abilities over dirt roads, loose sand, or coarse patches of asphalt.

The best part? You can have tons of fun without the dreaded range anxiety. The e-tron is fitted with a 95 kWh battery, which on European WLTP test cycle is good enough for 248 miles of range. US figures aren’t settled yet, but we’re expecting somewhere around 200 miles when the EPA is done. That’s not game-changing in the segment by any means, but what helps set the Audi apart is the 150 kW fast charger support. Find the right charger – and VW Group is investing in them heavily, courtesy of Electrify America – the system can recharge the battery to 80% capacity, or roughly 160-185 miles of range, in 30 minutes.

Instrumental to the e-tron’s efficiency is Audi’s recuperation technology, which is shaping up to be the best in the business. Energy is captured and pushed back into the battery when you brake below 0.3g of retardation while coasting, or if you manually trigger it using the left and right paddles mounted on the steering wheel. The transition between recuperation and the physical brakes is so smooth as to be imperceptible, too, though I wouldn’t argue with more of the former for the convenience of one-pedal driving.

If there’s ever a time when you should have the need to rough it out in the backwoods, just know that the e-tron SUV is rigid enough to take on mild to medium off-road duties. Switch the Drive Select to Off-Road mode and you’re good to go: the air suspension smooths out any bumps you might encounter, and also allows for the suspension to lift up 1.4-inches for better ground clearance. The “Lift” mode raises things another 0.6 inches. We had the opportunity to test out just how well it handled Abu Dhabi’s desert terrain, and I’m fairly confident that what we did was more than any owners will put this vehicle through. 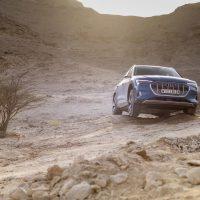 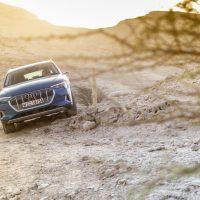 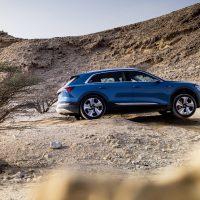 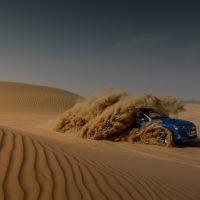 After our fun around – not in – the dunes, switching back to Comfort drops the e-tron down to normal height. Still, the trick suspension can automatically lower the SUV by as much as an inch to reduce wind resistance and improve aerodynamics.

On the inside, the cabin is suitably futuristic-looking with Audi’s excellent twin-touchscreen infotainment system, with plenty of comfort front and rear. A third display is for the driver, the latest iteration of Audi’s Virtual Cockpit dealing up not only the driver’s instrumentation but new screens for EV-specific content. I particularly like the new gear lever, which neatly rests under the center casing and shifts forward for Reverse and back into place into Drive. 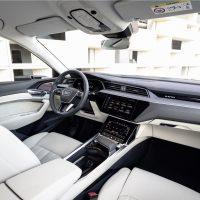 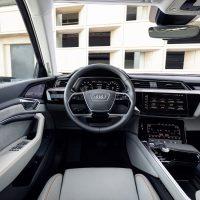 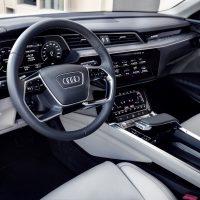 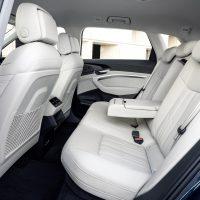 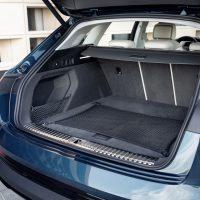 So far, so good… at least until we get the e-tron SUV to drive right here at home, anyway, to get a feel for how it holds up on US roads. With all the comfort, quiet, and tech in the Audi e-tron, choosing an electric car over a conventional one is becoming a much easier decision. At the end of the day, with the development and build out of DC fast charging throughout the US, range anxiety will increasingly become a thing of the past. That will leave the e-tron SUV shaping up nicely as the primary family vehicle for more and more people, instead of a secondary standby trusted only for short distance commutes. With pricing starting at $74,800 for the well-equipped premium plus trim, and $81,800 for the prestige – both before any applicable tax credits and incentives – this first all-electric foray by Audi is strong out the gate. 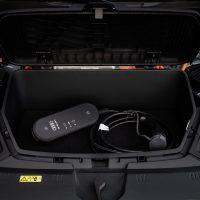 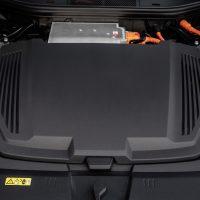 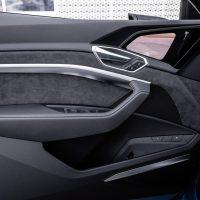 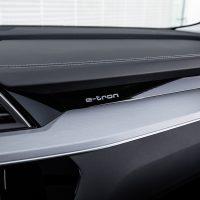 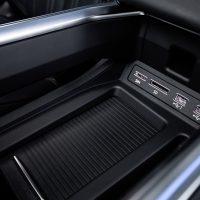 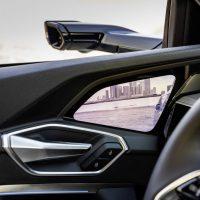 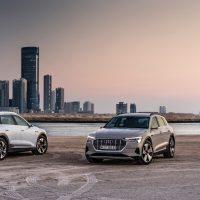 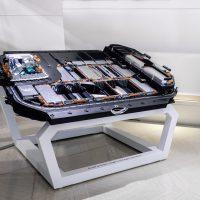 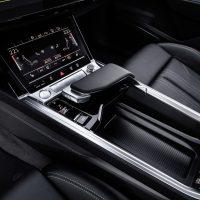 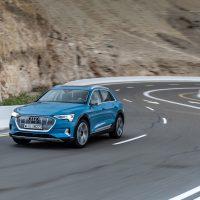