This is the heavyweight championship fight between three of the top-selling full-size SUVs. The 2018 Toyota Sequoia carries over unchanged from last year’s model. It may have the oldest platform in this group, but it still offers good value for money and a rugged demeanor. The 2018 Chevrolet Tahoe is the more affordable alternative to the GMC Yukon (both vehicles share the same platform). It can tow heavier loads while providing a more luxurious interior feel. The 2018 Ford Expedition is now motivated by a twin-turbo V6 motor. It is now more fuel efficient while still having the highest tow rating of all full-size SUVs.

All of our three contenders are among the most popular choices in this SUV-crazy market. But what sets them apart? Which offers the best value for money in terms of comfort, towing capabilities, safety, and technology?

We’ll give it to you straight. If all you want is a reliable and dependable full-size SUV and you don’t mind the lack of an upscale interior, take the 2018 Toyota Sequoia for a test drive. The base model may look expensive, but the Toyota earns the distinction of having more driver assistance safety features for the money. All models of the Sequoia are equipped with Toyota Safety Sense-P which includes a pre-collision warning system with pedestrian detection, lane departure alert with sway warning system, dynamic radar cruise control, and automatic high beams. 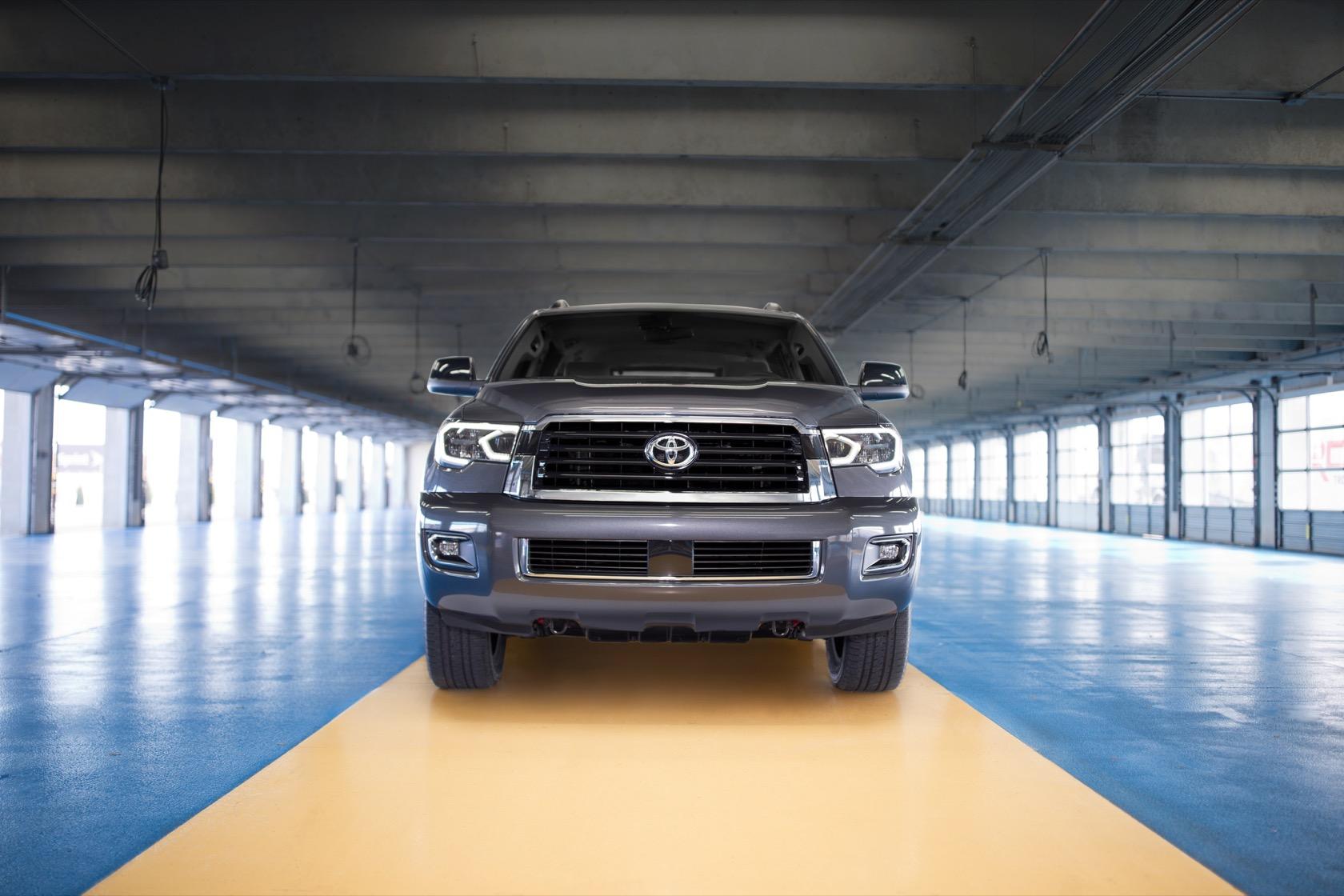 The base model Sequoia starts at around $49,000 and comes with seating for up to eight adults, LED low and high beam headlights with auto on/off, 18-inch wheels, a power sunroof, sliding and reclining second row seats with a fold flat third row rear bench, rearview camera, a 6.1-inch touchscreen with an eight speaker audio system, and Bluetooth connectivity.

All trim models of the 2018 Toyota Sequoia are still powered by the familiar 5.7-liter i-Force DOHC V8 motor that churns out 381-horsepower and 410 pound-feet of torque @ 3600 rpm. The engine is mated to a six-speed automatic transmission that drives the rear wheels. If that’s not enough, you can spec your Sequoia with the optional all-wheel drive system. 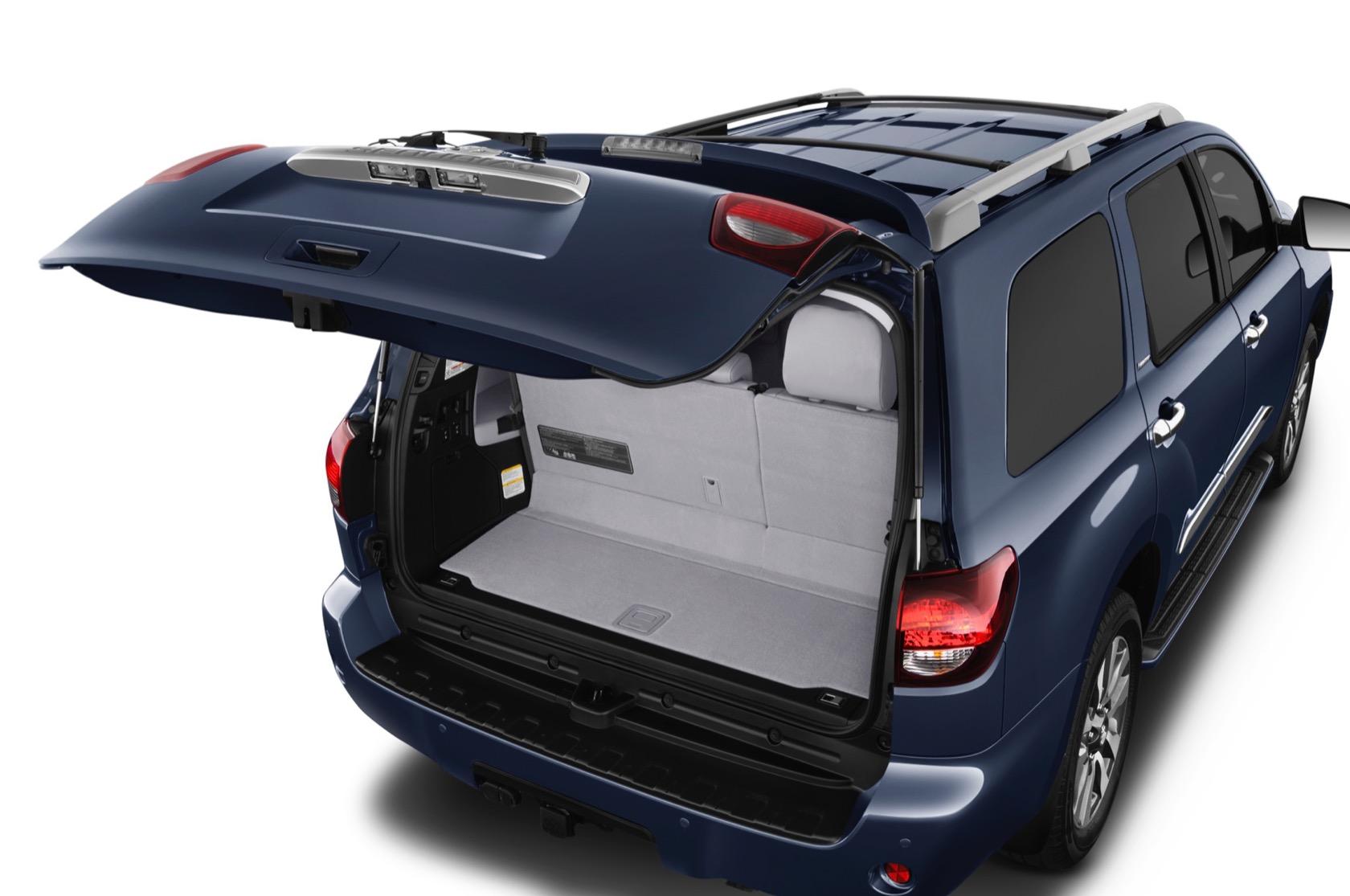 The TRD Sport trim starts at around $51k and includes a sport-tuned suspension system, larger 20-inch black alloy wheels, and a plethora of TRD-branded interior trim including a nice shift knob and embroidered floor mats. The Limited trim starts at below $58k and can be ordered with seven leather-covered seats with a second-row captain’s chair and power liftgate. The Platinum trim will cost you $64,400 and throws in heated and ventilated front seats covered in perforated leather, adaptive variable rear suspension, power adjustable steering wheel, and a rear seat Blu-ray entertainment system.

The maximum towing capacity of the 2018 Toyota Sequoia is rated at 7,400 lbs. This is not exactly best-in-class. But for most people, it is more than enough to get the job done. What we like about the Sequoia is the honesty. It’s not pretending to be a luxury yacht on wheels, nor is it trying to be sportier than a crossover. The interior may be filled with hard plastics but the cabin is quiet and serene. It beats both the Tahoe and the Expedition in terms of cargo space especially if you fold the second and third row seats. The Sequoia is also capable as an off-road machine if equipped with four-wheel drive, although we only recommend this heavy vehicle for light to moderate trail duties. 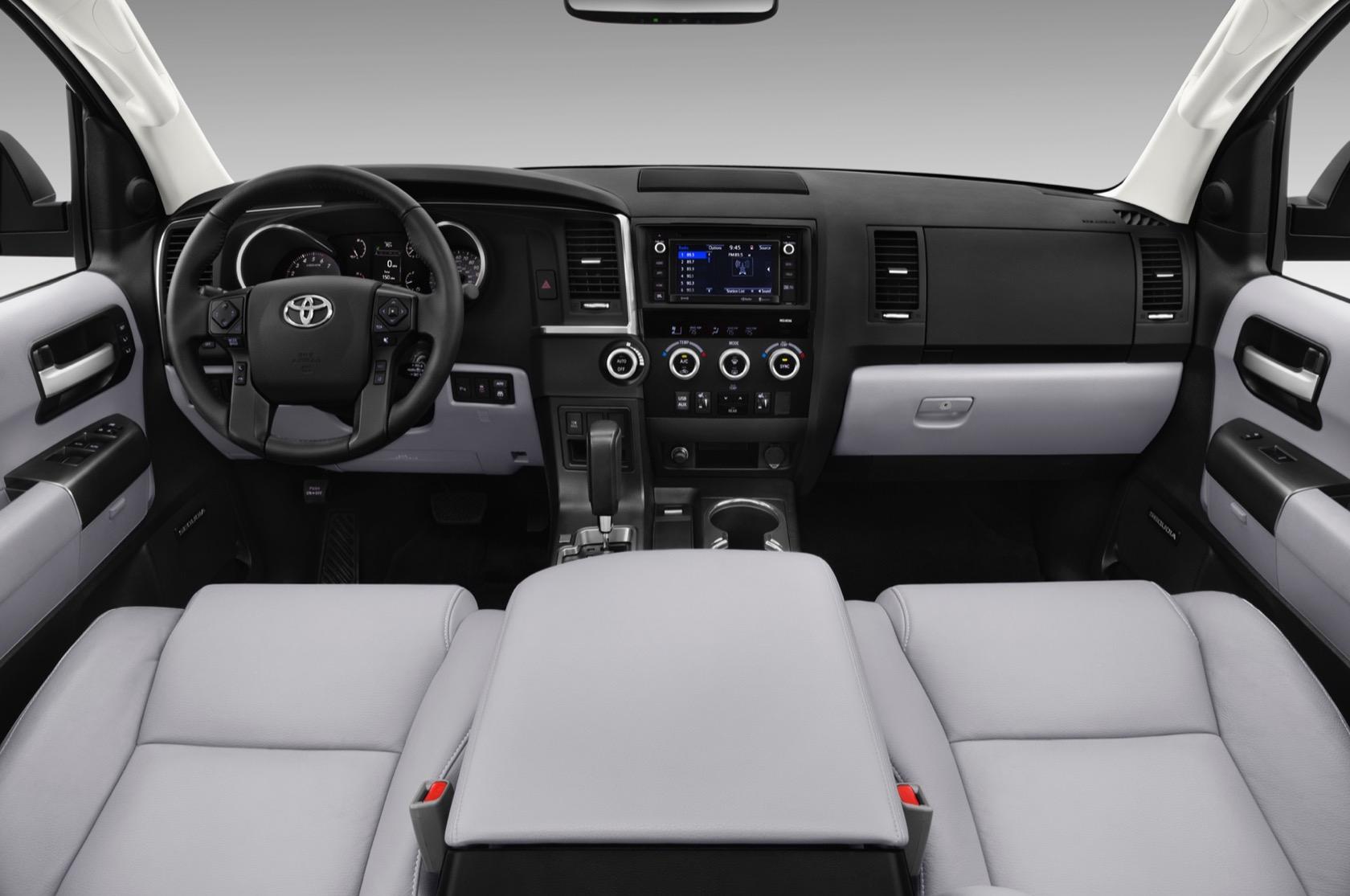 What are the things we don’t like about the Sequoia? We wouldn’t mind a bit more space in the second and third row given the size and length of this thing. It would also be nice if Toyota included Apple CarPlay and Android Auto as standard equipment, but it seems you can’t have it all. Oh, and it also happens to be the loser in overall fuel economy. All that size and weight will only net 13/17 mpg in city and highway driving. You can easily say this is expected in a full-size SUV, but both the Chevrolet and the Ford can achieve better numbers despite the higher tow ratings.

We like the 2018 Chevrolet Tahoe. The handsome and rugged design is complemented by a pair of strong and torquey V8 motors. This enables the Tahoe to have a maximum towing capacity of up to 8,600 lbs. This rating is among the best in full-size SUVs eclipsed only by the Ford Expedition. The Tahoe also comes with a comprehensive list of safety equipment even in base trim. This includes seven airbags, daytime running lamps, the OnStar and Chevrolet Connect system, a standard rear camera with rear park assist, stability control, and a tire pressure monitoring system. 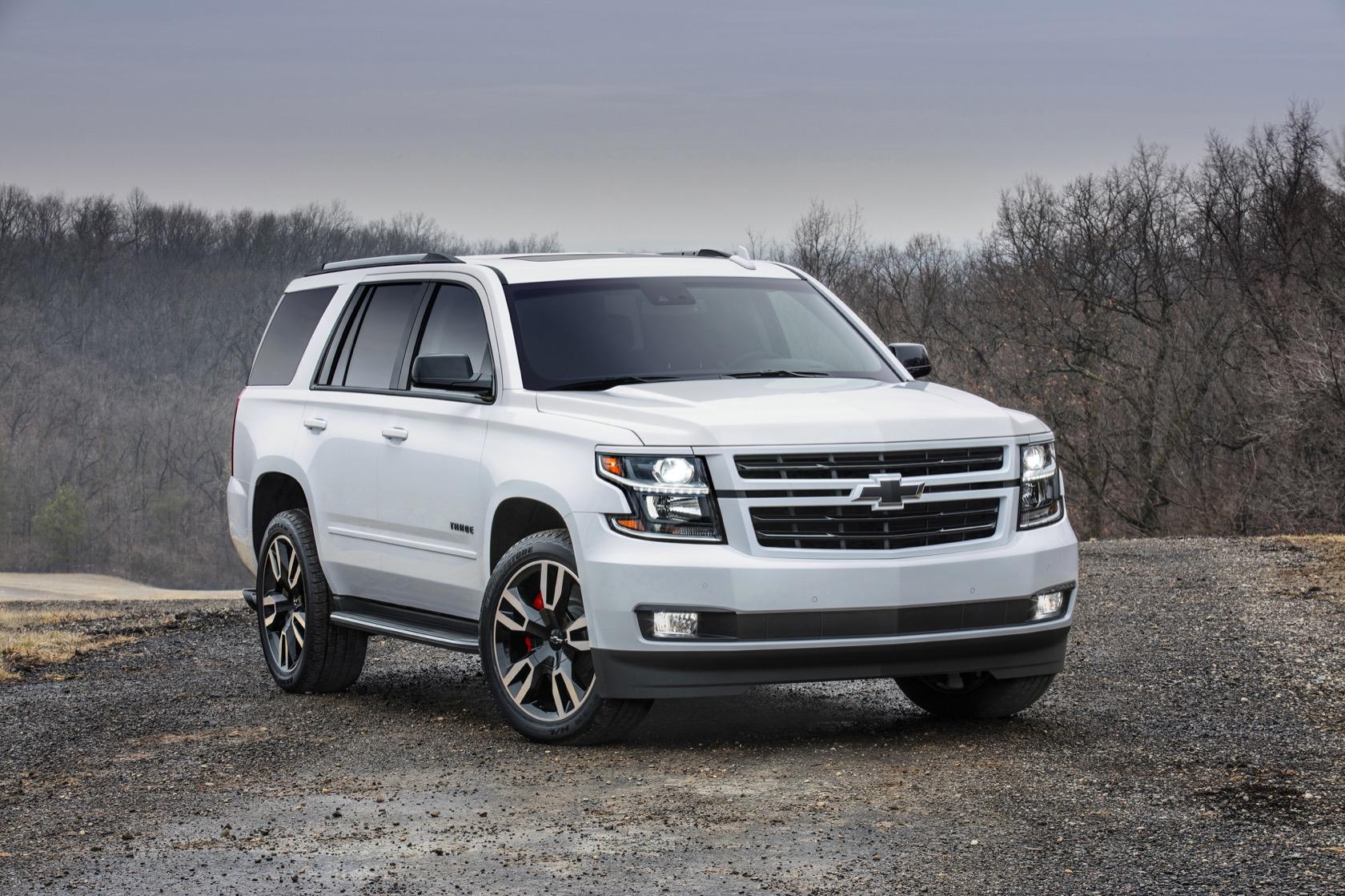 All trim models of the 2018 Chevrolet Tahoe are powered by a burly 5.3-liter V8 motor that produces 355 horsepower and 383 pound-feet of torque. The engine is mated to a six-speed automatic transmission. Rear-wheel drive is standard but four-wheel drive is optional along with a single speed transfer case. The Tahoe can accommodate eight grown adults but an optional bench seat in the middle row can increase the seating capacity to nine. However, this feature can only be specified in the base LS trim. 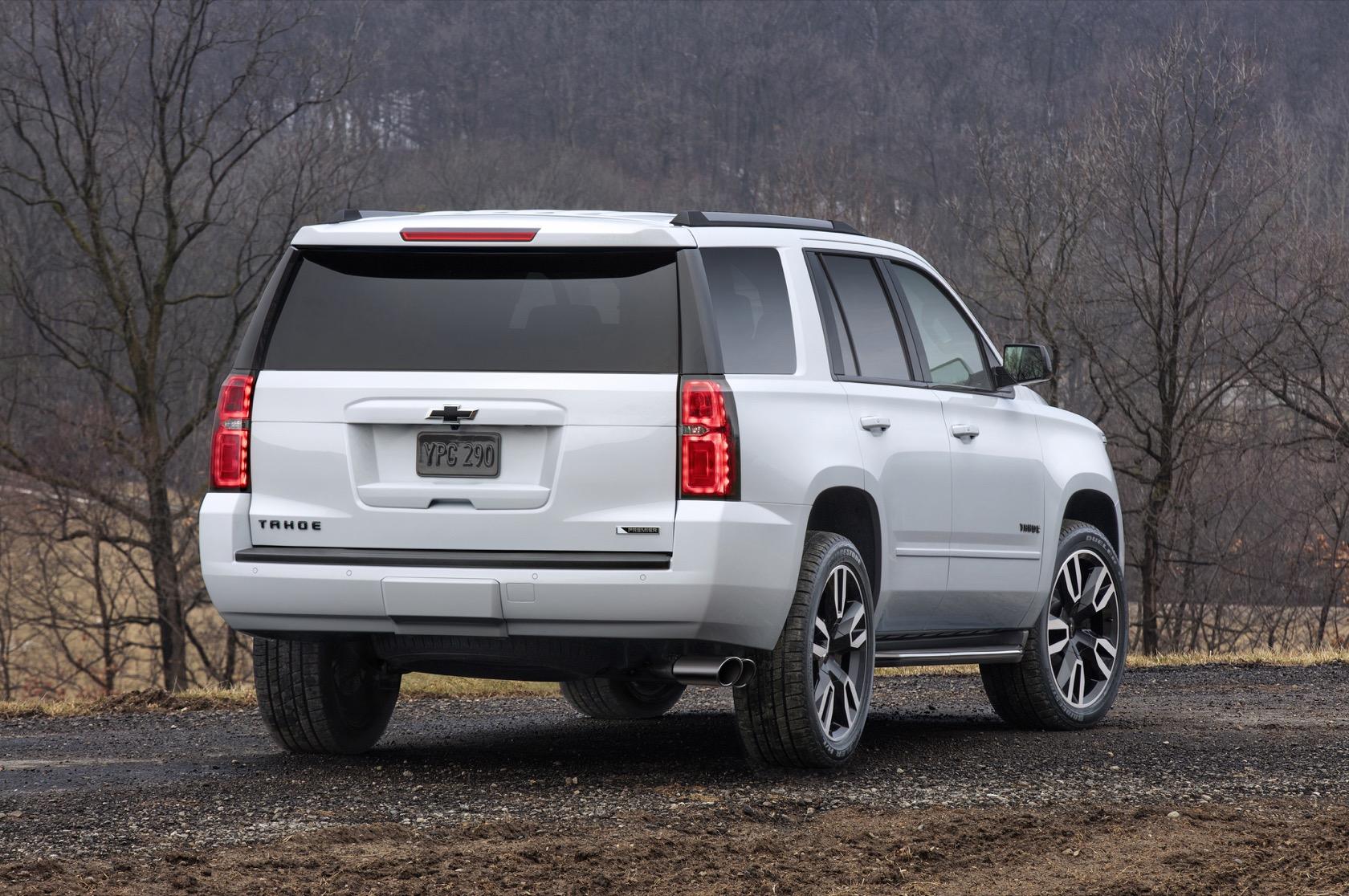 We like how it looks. We also like the interior comfort and premium cabin. We even favor the 15/22 mpg fuel economy rating of the 2018 Chevrolet Tahoe. But for all its strengths, there are also certain weaknesses. The standard 5.3-liter V8 motor might sound burly, but it somehow feels strained under the weight of the Tahoe. The steering is lighter than usual and is slow to react to our commands. In fairness, the Chevrolet Tahoe is making no pretensions about its roots. This is a machine with a truck-based body-on-frame construction, and it feels like it as you drive the Tahoe down the road.

If comfort, luxury, and towing capacity is your top priority in a full-size SUV, the 2018 Chevrolet Tahoe should be on top of your list. The Toyota Sequoia trumps the Tahoe in overall cargo space, but the Chevy has a nicer interior overall.

The Ford Expedition requires no introduction. It remains the default choice for those who need to haul plenty of people and cargo, with enough power to spare to tow up to 9,000 lbs. This feat is impressive given the non-availability of a powerful V8 motor. Instead, Ford decided to equip all trim models of the 2018 Expedition with a smaller yet more powerful twin-turbocharged V6 motor. This motor may not be the most powerful in full-size SUVs with a body-on-frame construction, but it can motivate the Expedition from 0 to 60 mph in a scant 7.0 seconds. This makes it the quickest full-size SUV in this comparison. 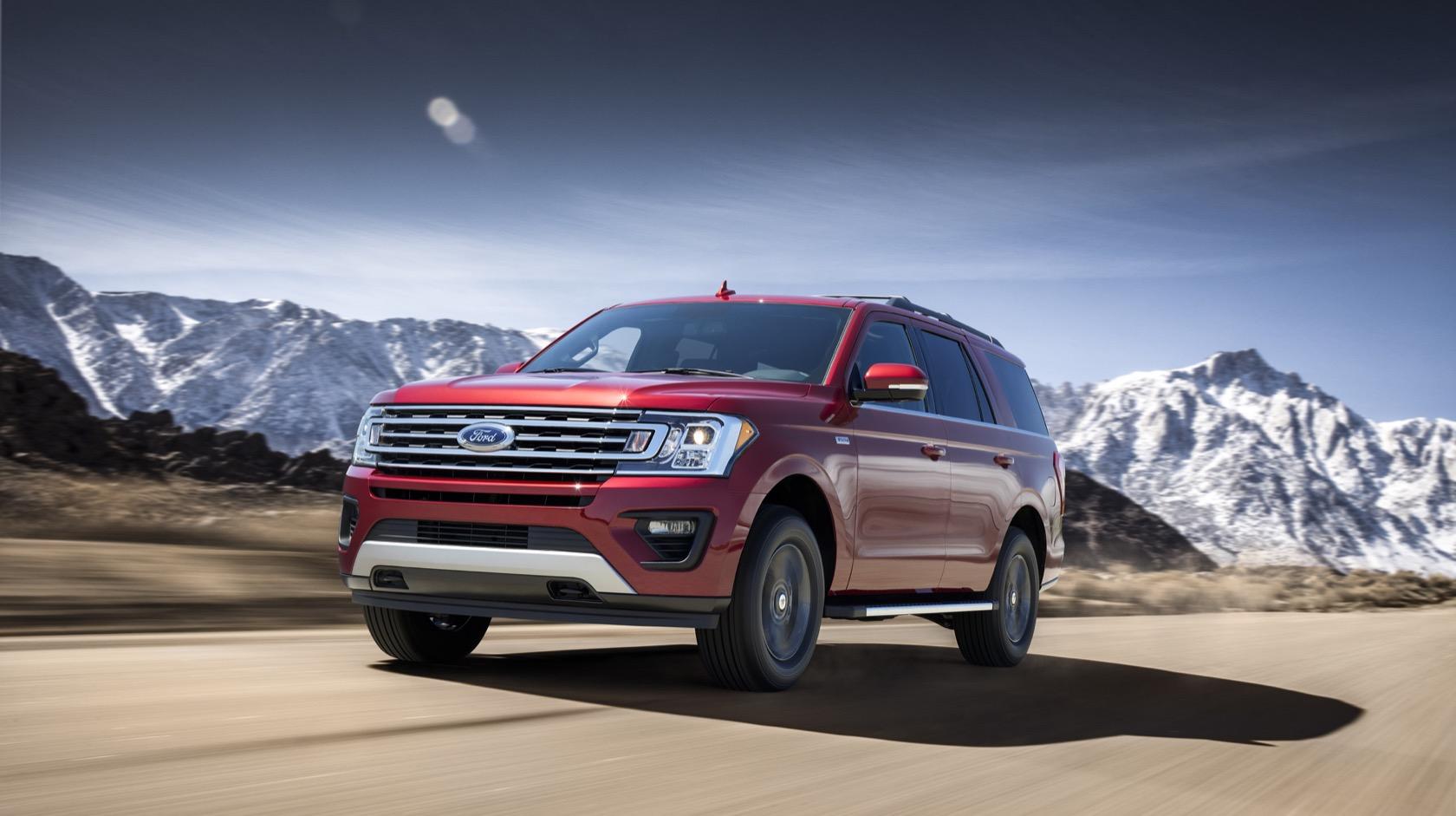 All trim models of the 2018 Ford Expedition receives the 3.5-liter turbocharged EcoBoost V6 motor that churns out 375-horsepower and 470 pound-feet of torque. The motor is connected to a new 10-speed automatic transmission to achieve a best-in-class fuel economy rating of 17/24 mpg in city and highway driving. Rear-wheel drive is standard while four-wheel drive is optional. If you need more cargo room, the 2018 Ford Expedition is also available in an extended wheelbase version that is available in the XLT and Limited trim. 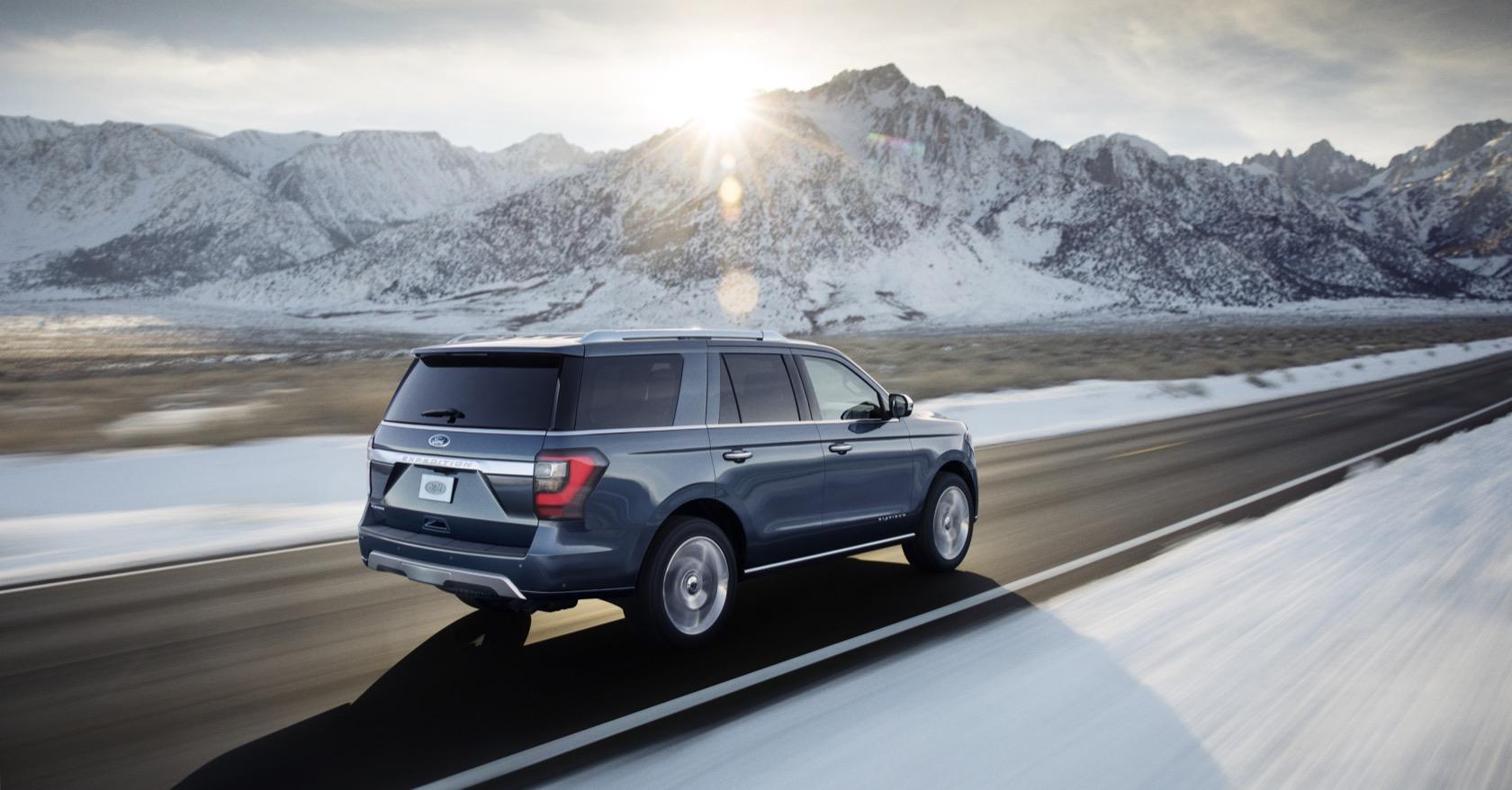 If you choose the Expedition Platinum, Ford will include a more powerful version of the EcoBoost V6 motor that churns out 400-horsepower and 480 pound-feet of torque. The Platinum trim also includes more goodies such as larger 22-inch wheels, adaptive suspension, a 360-degree parking camera, LED headlights and taillights, and an automatic parking system.

The 2018 Ford Expedition may be the most expensive in this comparison review, but it also happens to be the quickest and most agile among the three full-size SUVs. The brakes could use some work but we admire how the Expedition can change direction without upsetting the overall balance of the truck. The ride is not as good as the Tahoe or the Sequoia but the seats offer more comfort and support for those spirited long drives. 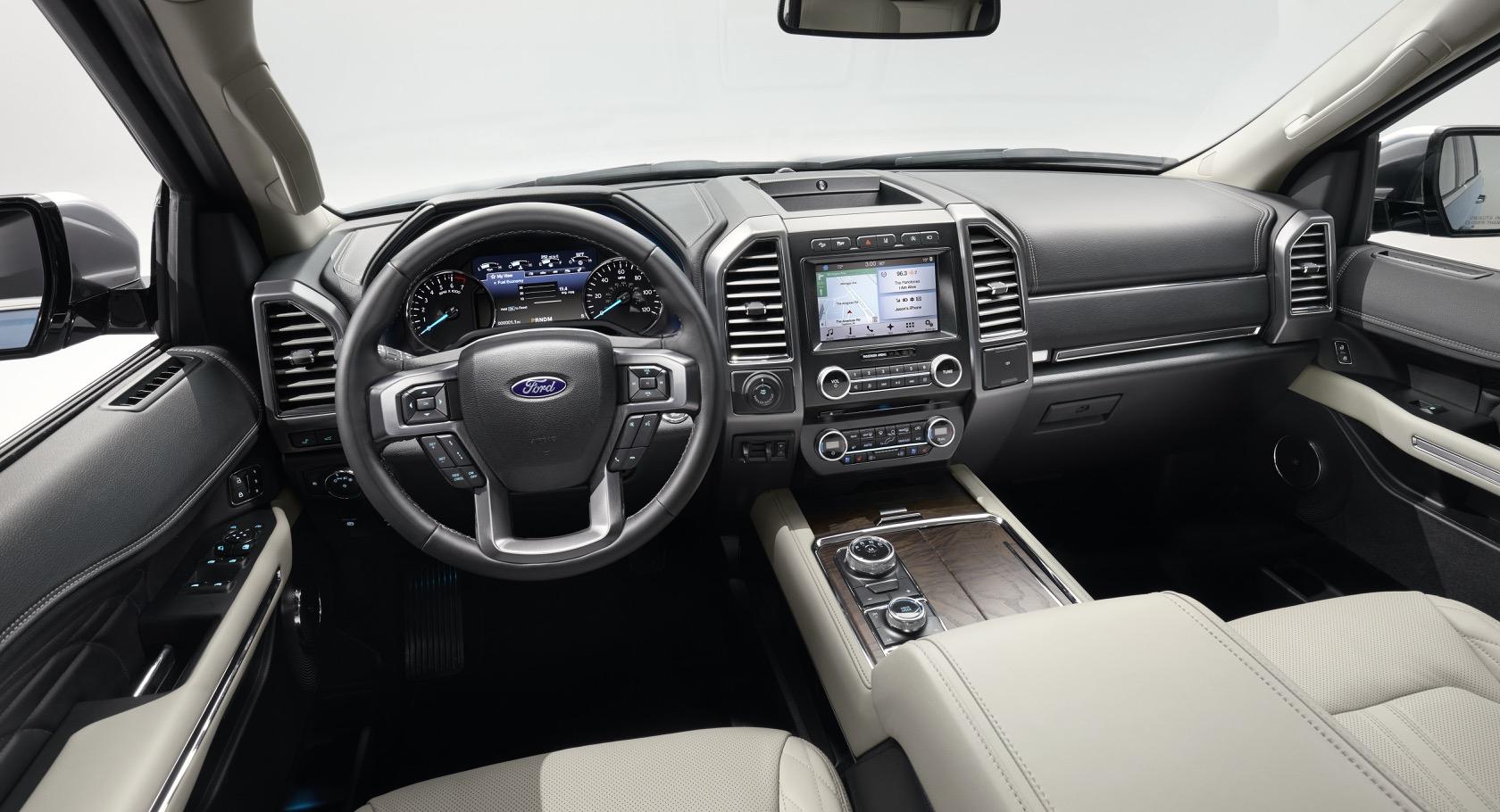 We also find the Expedition’s interior to be the nicest and most luxurious in this bunch. In fact, it feels like you’re behind a more expensive German-made SUV. Cargo space is also top notch as the second and third row seats can be folded to accommodate larger gear and equipment. The cabin is roomy enough to accommodate up to eight passengers. The third row seating is impressive as well. Unlike other SUVs, the third row seats doesn’t feel like a penalty box.

The towing capacity deserves second mention. The 2018 Ford Expedition has a rated towing capacity of 9,300 lbs. when properly equipped, which beats both the Toyota Sequoia and Chevrolet Tahoe despite the smaller displacement V6 mill. If you demand a luxurious interior, sportier driving experience, and maximum towing capabilities in a full-size body-on-frame SUV, take a closer look at the 2018 Ford Expedition. Yes, it may be more expensive than the Toyota Sequoia and Chevrolet Tahoe. But you also get a more powerful and fuel-efficient mill along with a premium cabin.

The 2018 Toyota Sequoia is in desperate need of an update, but this doesn’t mean it can’t butt heads with the Chevrolet and Ford. The 2018 Chevy Tahoe is the goldilocks in this test. It is just right in terms of price, space, and comfort levels. If the cost is the least of your concerns, you should go for the 2018 Ford Expedition to experience the majesty of that delicious EcoBoost V6 motor.