Velar is an very old name for a very modern Range Rover. Automakers mining their history for neglected nameplates isn’t new, of course, but all the same few spend so long in the cold as Velar did. Used, nearly five decades ago, on the first “hiding in plain sight” prototype Range Rovers, the badge is back to usher in a very British reinvention of the midsize luxury SUV. No small challenge ahead, then, as Land Rover explained when it invited me out to Norway to experience the 2018 Velar in action.

Design is subjective, but I’m of a mind that it’s Range Rover’s best looking car in years. Side by side with a Range Rover Sport, and the Velar leaves the bigger, older car looking fussy and overly sculpted. If the full-size Range Rover looks as though it’s been built up of layers of the very rock strata it can scale so adeptly, then the Velar is the smooth stone shaped by the flow of rivers and fjords (and yes, it can wade through those, too).

If there’s a weak spot it’s the rear, which could do without the silver lower valance trim, but Range Rover’s narrow LED tail-lamps are a joy. A pity, then, that the US won’t get the laser headlamp system (blame regulatory issues for that). You couldn’t mistake it for anything other than a Range Rover, but neither is it bogged down in nostalgia.

It feels a larger car than Jaguar’s F-PACE, with which it shares a chassis, and much closer to the Range Rover Sport in scale than the Evoque. That sensation persists on the road, where the high hood and tall dashboard left me a little uncertain where the corners of the SUV were. All-wheel drive is, of course, standard, with four-corner air suspension an option. 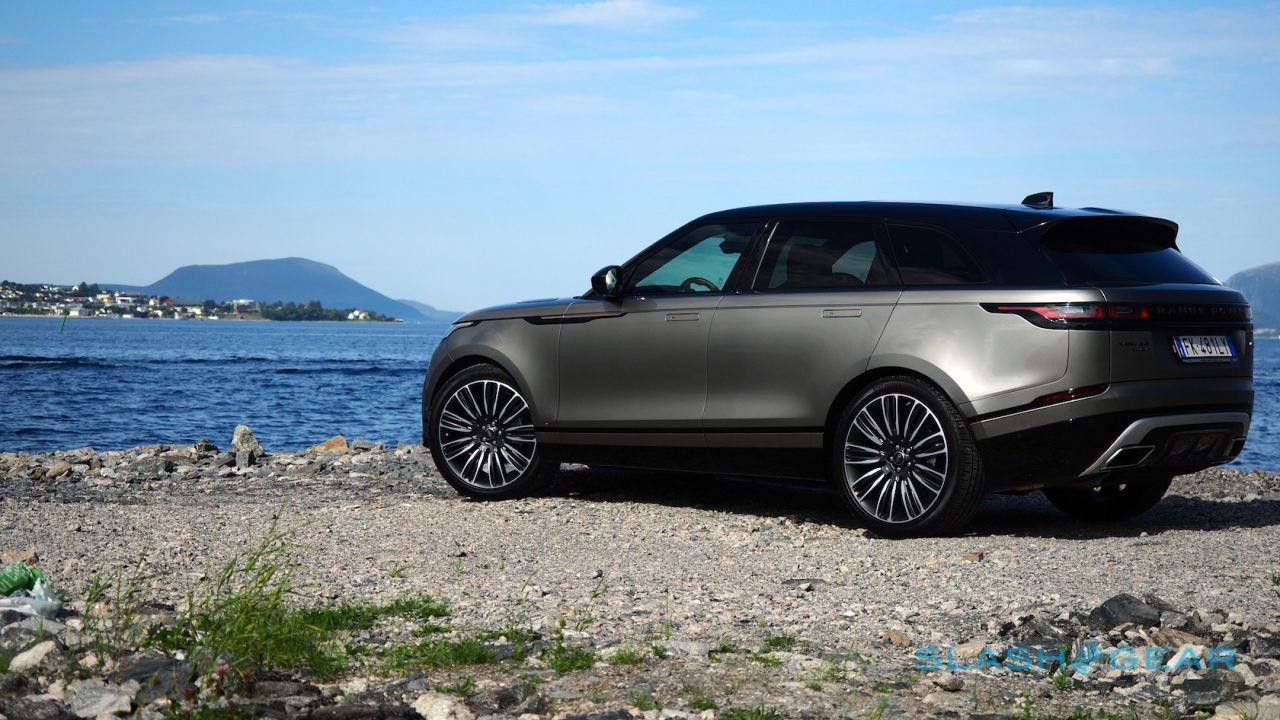 The detailing is key. The flush-fitting door handles which slide out when you unlock the Velar, for instance, and which somehow manage to still feel as sturdy as those on a regular Range Rover. They’ve been cold weather tested so that, even if your SUV is encased in ice, they’ll still punch through.

Then there are the copper accents, an unusual finish on a modern vehicle, and the super-slim headlamps. The 22-inch wheels that come standard on the Velar First Edition – and which are options for the rest of the range – fill the wheel arches deliciously. 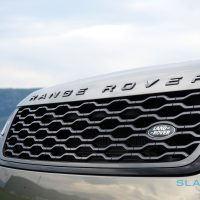 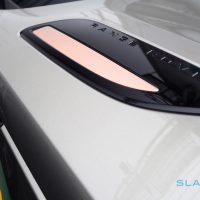 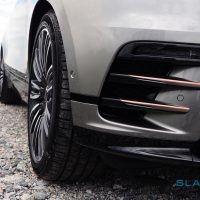 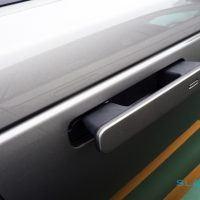 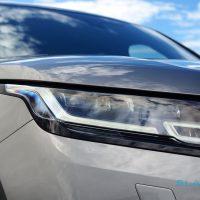 The US will get half of the six engine options Range Rover will offer in European markets: a 180 horsepower four-cylinder diesel with 317 lb-ft. of torque; a 247 horsepower four-cylinder gasoline engine; and a 3.0-liter supercharged V6 with 380 horsepower. I spent my time in the latter, which the automaker says will do 0-60 mph in 5.3 seconds and top out at an electronically limited 155 mph. Like the others it’s paired with a standard ZF eight-speed automatic transmission.

It’s not a slow engine. The V6 Velar is eager on the road, the gearbox quick to downshift and hard to confuse. Sadly it doesn’t come with the sonorous soundtrack familiar from other implementations of Jaguar Land Rover’s Ingenium powertrain; its growl is subdued and doesn’t exactly encourage eager driving. We’ll have to wait for an – unconfirmed, but hardly unbelievable – SVR variant for that. 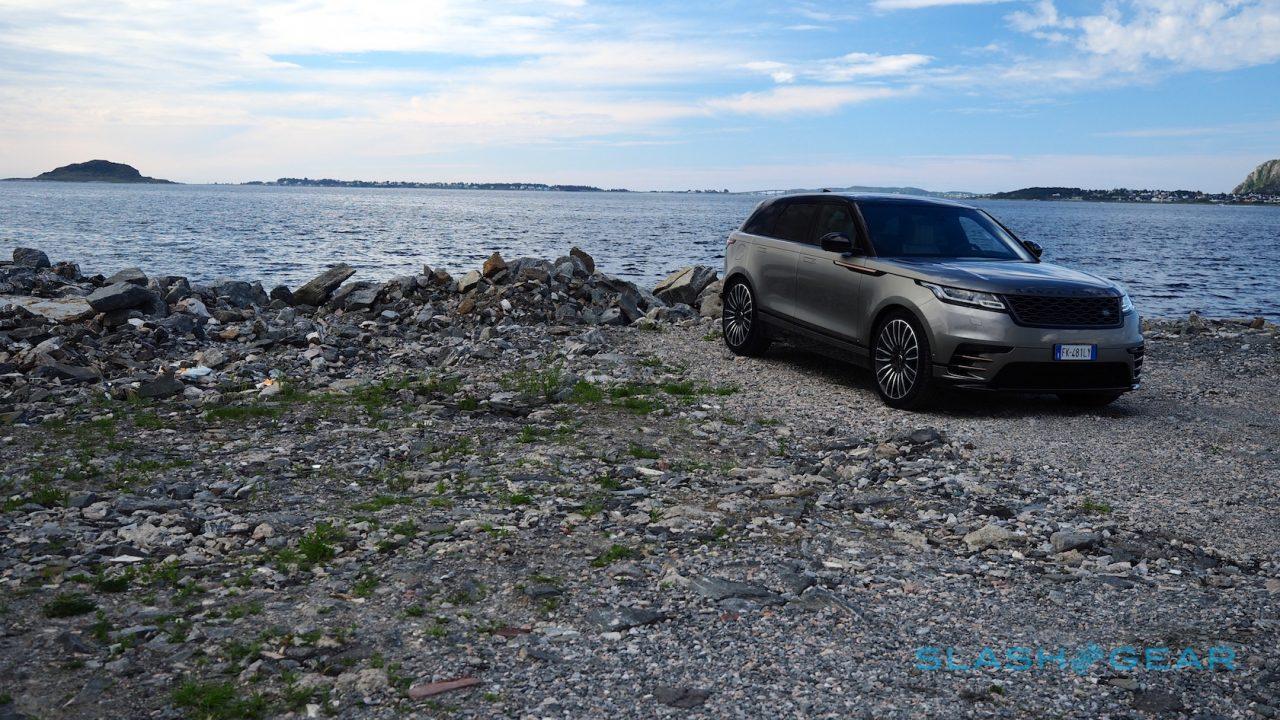 What you do get now is a smooth, compliant ride. Leave the air suspension in Comfort mode and the Velar is every bit as undemanding as its biggest sibling, the steering light enough for a few careless fingers on the leather-wrapped wheel to ease the SUV levelly around corners. Flick to Dynamic and the steering loses the slight play Comfort dials in, weighting up nicely. This isn’t a sports SUV, certainly, but neither does it shirk the “R-Dynamic” badging that the First Edition – a limited run of the very first cars – bears.

Like the exterior, the interior design language is instantly recognizable. At a second glance, though, the departures from what you’ll find on the dashboard of Range Rover’s existing models becomes more apparent. Most striking is the sheer reduction in the number of physical controls, replaced with touchscreens, multifunction dials, and a few touch-sensitive buttons. A sharply-canted, leather-wrapped console still runs the width of the car, but the narrower air vents and pared-back switchgear leave it far cleaner. 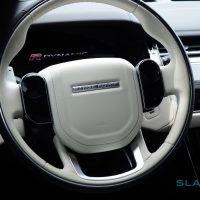 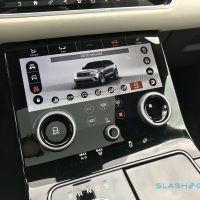 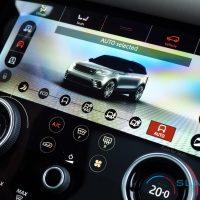 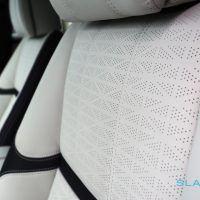 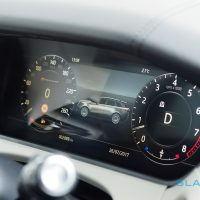 With the new InControl Touch Pro Duo, the infotainment system has been split into two touchscreens. The first is a wide-aspect 10-inch capacitive panel; it motors upright out of the dashboard when you start the engine, and its angle can be adjusted. The second sits lower, in the center console, and is a squared-off 10-inches.

Together, they allow Range Rover to separate out the different elements of the interface. Up top, the familiar side-scrolling boxes offer access to navigation, multimedia, phone, and other features. However, because you can also show multimedia and other secondary functions on the lower touchscreen – in addition to HVAC and settings – there’s no need to choose between having, say, both a map and album information visible at once. 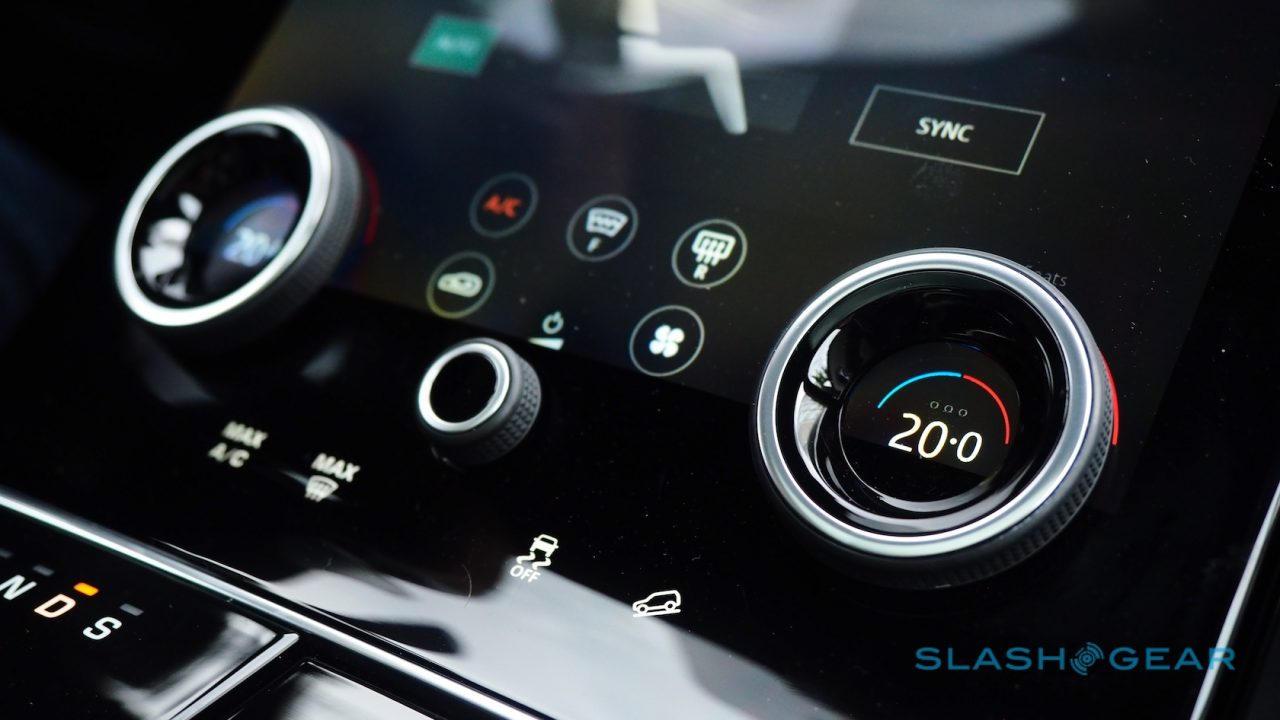 The lower display also offers access to Range Rover’s Terrain Response and Terrain Response 2 settings, rather than them demanding space for a physical control. While you do get a pair of control wheels, they’re context-specific. Normally, they control HVAC temperature, but when you’re in the Terrain Response page they cycle through the various off-road settings instead. You still, thankfully, get a physical volume knob, along with the rotary transmission dial that rises from the console.

It could have been confusing, but Range Rover swerves that with a clean, tabbed UI. Optically laminated displays, where the TFT is bonded right to the coverglass, lend the impression that the buttons are printed on the panel rather than hovering somewhere underneath it. I experienced no lag, or sluggish swiping, which can render other cars frustrating. The fact that it’s the ideal setup for Android Auto or Apple CarPlay, but that neither is available, makes their absence doubly-frustrating, mind. 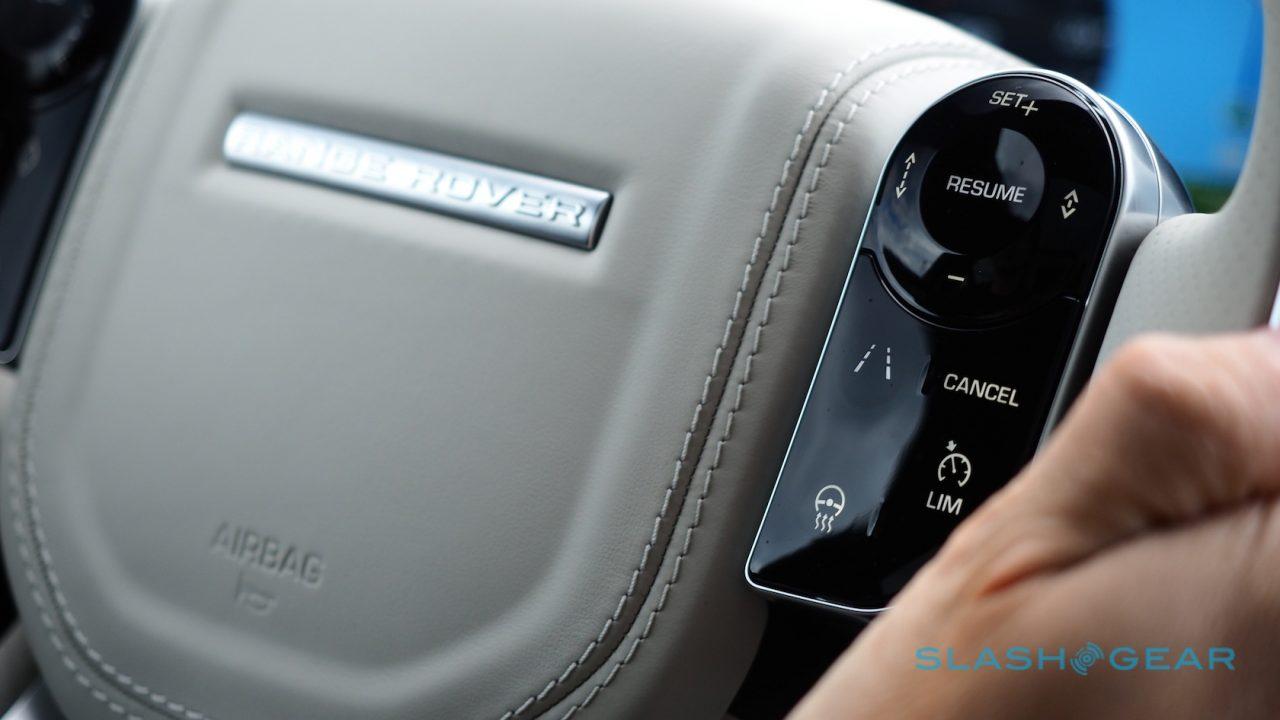 A third display is up in the instrumentation, either a 5-inch TFT sandwiched between analog dials on lower trims or, on SE and above, a full 12.3-inch TFT which can show either a full map, single dial, or twin dial layouts. On the steering wheel, the button labels are now backlit which allows them to vary according to mode and situation. Ambient LED lighting has ten color settings to choose between, and there’s LTE WiFi with an eight-client hotspot, Range Rover’s companion smartphone apps, and up to four USB ports and two 12V outlets.

As with the exterior, Range Rover’s attention to detail continues through the cabin. The new perforated leather hides a subtle Union Jack logo, which is picked up again on the speaker grilles. Everywhere you might be expected to touch is soft to the fingertips. 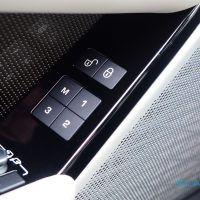 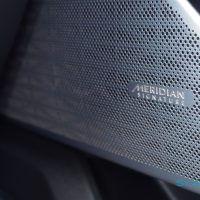 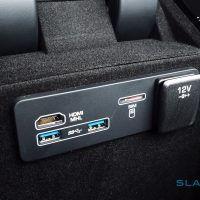 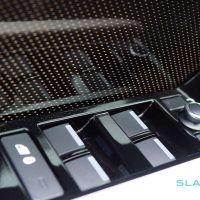 The mixture of patterns and textures can edge on overwhelming in places; the door trim, for example, has perhaps one too many finishes. Overall though, Range Rover deserves credit for pushing the envelope in materials. Offered alongside the leather, for instance, is a high-tech Kvadrat fabric option which promises to be just as premium as the more traditional hide. These aren’t cloth seats just because you can’t afford the Nappa, they’re a legitimate design choice in their own right: a tactile wool-blend, offset with Suedecloth inserts.

Legroom in the rear is impressive, helped of course by a wheelbase far closer to that of the Range Rover Sport than of the Evoque. A six-footer shouldn’t have too many problems sitting behind a similarly tall person up-front, and neither is headroom an issue despite the tapering roofline. The rear bench folds with a 40/20/40 split, but even with it up there’s a decent 34.4 cu-ft of space behind the power tailgate, that opens with a waggled foot underneath the rear bumper. 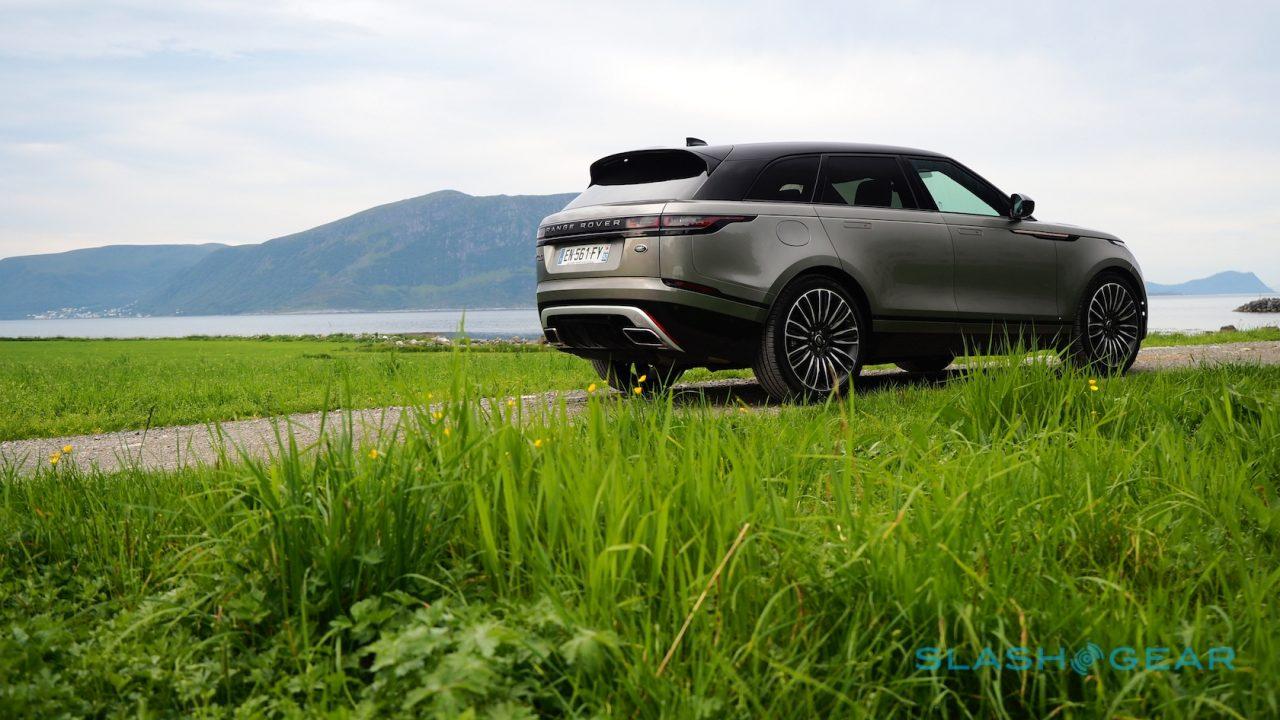 The Land Rover Activity Key is an option, a battery-free NFC sports wristband that can lock and unlock the Velar while you indulge in the sort of extreme sports that usually feature in promotional photos for cars of this ilk. That’s not to say the Velar can’t venture further than the parking lot. You need a certain level of off-road ability in order wear the Range Rover badge, and this mid-size model is no exception.

Coil-spring versions have 8.4-inches of ground clearance, rising to 9.9-inches when air suspension is added. The former can wade 23.6-inches through water; the latter 25.6-inches; each supports a maximum approach angle of 24.5-degrees, a break angle of 20.3-degrees, and a departure angle of 27-degrees. Range Rover’s Adaptive Dynamics system tracks wheel movement 500 times per second, and body movement 100 times a second, to individually adjust damping forces at each wheel according to terrain; brake-based torque vectoring, also standard, lightly slows the inside wheels through corners for greater stability. 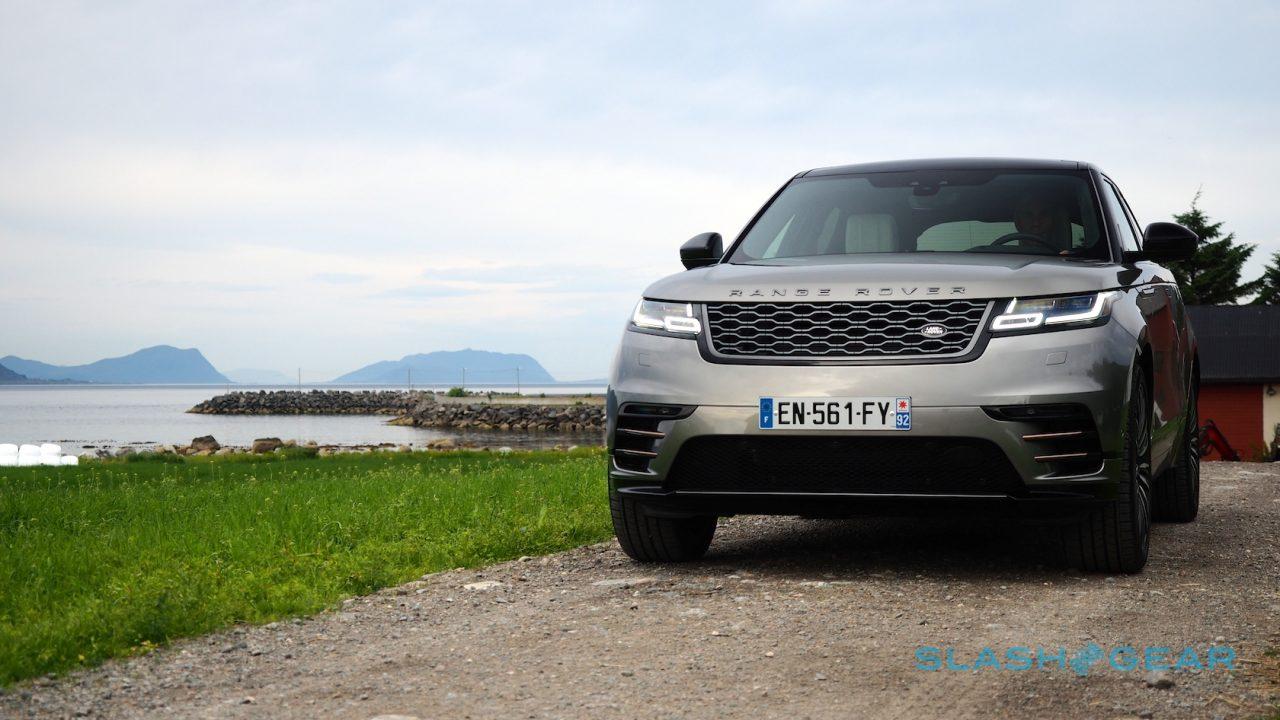 Despite some tempting riverbeds, Range Rover preferred that we kept the Velar on the tarmac for the most part. Across an off-road demo course, though, the SUV’s all-wheel drive system had a chance to prove its worth. Capable of switching from 100-percent rear bias to fully locking the transfer case to the front in 165 milliseconds, it works with the optional Active Locking Rear Differential – available on the V6 – that shifts rear power side to side according to individual grip.

Terrain Response offers Eco, Comfort, Grass-Gravel-Snow, Mud-Ruts, Sand, and Dynamic drive modes through the lower touchscreen; Terrain Response 2, an option, adds an Auto setting that allows the Velar to figure out the right mode itself. You also get the all-terrain progress control system that’s effectively low-speed cruise control for creeping across arduous terrain; hill descent control; and low-traction launch control for getting started on slippery surfaces. Add a hitch, and the Velar can tow up to 5,512 pounds on V6 models, with Advanced Tow Assist for reversing using the camera and rotary controller. 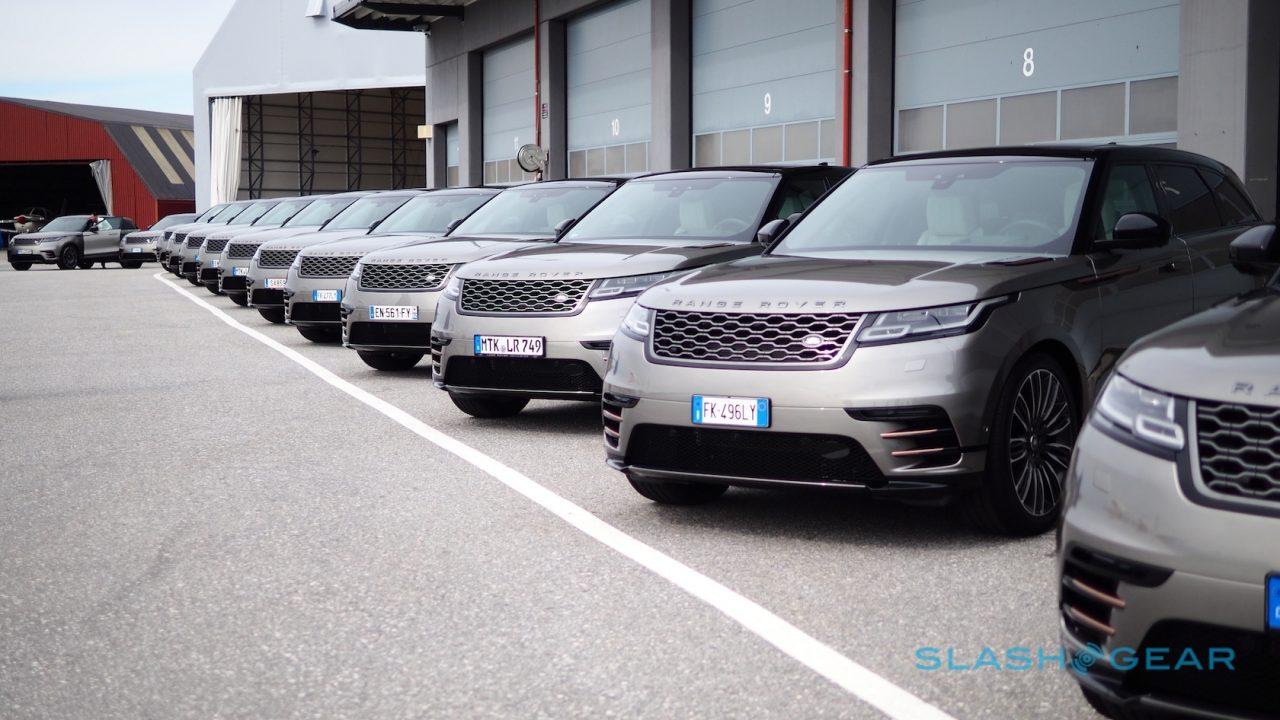 I suspect that few Velar owners will make particular use of any of the SUV’s off-roading talents. Nonetheless, in a segment – and for a marque – where “knowledge that you could” is equally important as actual ability, make no mistake. This is a true Range Rover, with all the bragging rights that comes with.

It’s also priced like a Range Rover. The entry-level Velar, with the 2.0-liter gas engine, slips in just under the $50k mark (before you add in the $995 destination), but I suspect most will be in the mid-60s at least by the time they leave the dealership forecourt. The entry-level Velar S diesel starts at $56,200, while you’re looking at $64,200 up for the supercharged V6. The top-spec Velar V6 First Edition I drove is a heady $89,300, and by that point you’re well within Range Rover Sport territory. 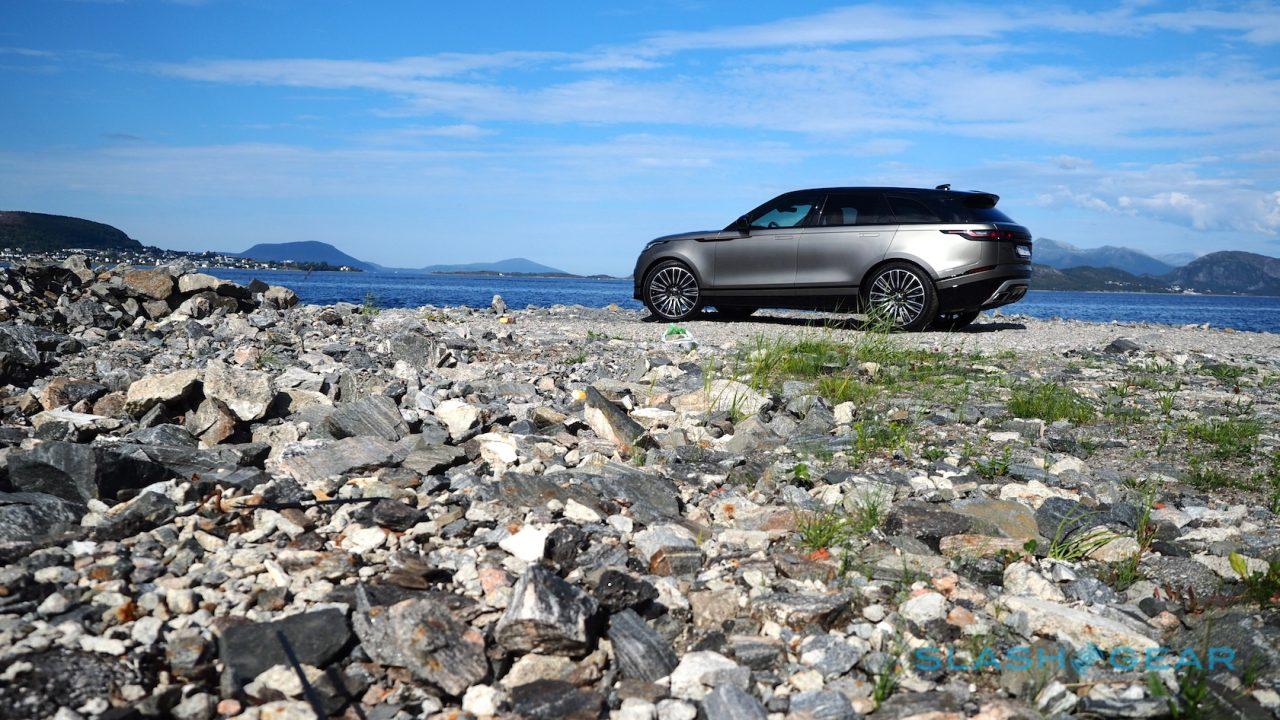 On the one hand, the Velar absolutely feels like the “modern Range Rover,” easily eclipsing the style and technology of its bigger siblings. With the US line-up topping out at the 3.0-liter V6, though, the allure of the Sport’s silky and full-throated 5.0-liter V8 may still prove too much to ignore. Combine Velar and V8, and I suspect you’d have the perfect equation for many luxury SUV buyers.

That doesn’t diminish what Range Rover has done now, though. Somehow the 2018 Velar both tugs at the sentimental heart-strings and appeals to the demanding modern driver: heritage and high-tech, in a deeply special package.