Not since Baywatch in the days of Pamela Anderson has silicone proved so fascinating to so many, as Apple using it in the third-generation butterfly keyboard on the controversial 2018 MacBook Pro. The reworked keys are, Apple insists, all about reducing noise, but that hasn’t stopped plentiful speculation that in reality they’re intended to address the spate of stuck buttons that forced the Cupertino firm to offer free repairs.

Teardown specialist iFixit had already revealed the existence of the silicone barrier back when it first opened up the 2018 MacBook Pro. Now, it has returned under the hood to explore just how it works. More importantly, the team there also tested just how well the new butterfly keys held up to intrusive dust.

To do that, fine powered paint additive was blown into the keyboard, before the keycaps were removed to see just where it had gathered. Turns out, the dust is held at the edges of the membrane, which act as little shields for the keycap clips. “The holes in the membrane allow the keycap clips to pass through, but are covered by the cap itself, blocking dust ingress,” iFixit says. 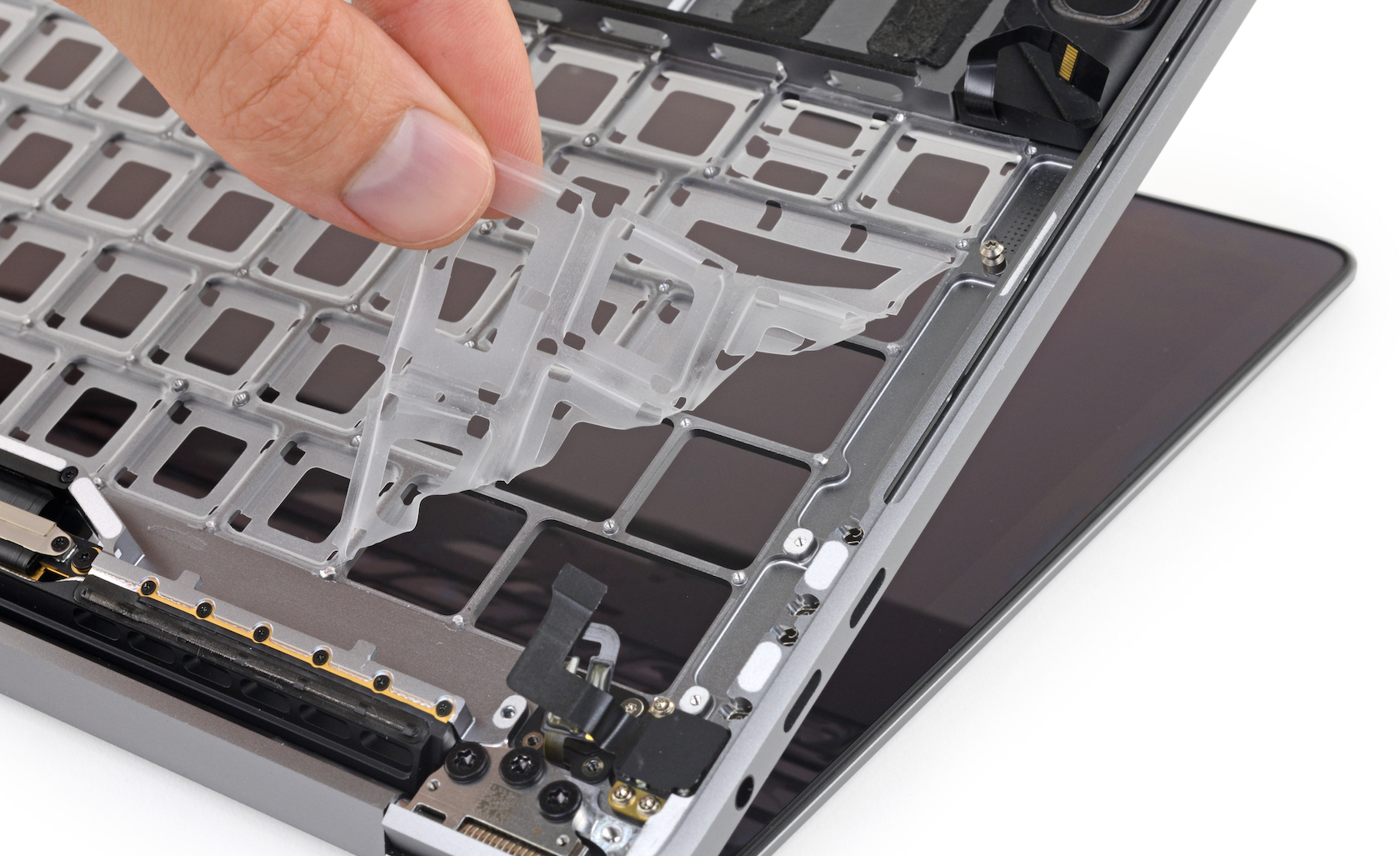 It’s not foolproof, mind. With sand blown in, representing an altogether more challenging sort of grit, “a few poorly placed particles” are sufficient to jam up the keys. Whether the silicone shield also makes it easier to blow out those larger particulates with a can of compressed air, we’ll have to wait and see.

The silicone itself is is a single die-cut and molded sheet, though actually reaching it is an arduous quest. iFixit had to remove stickers, screws, rivets, and more just to get inside. With Apple opting to exclude these third-generation butterfly keyboards from its keyboard repair program, that’s something else to bear in mind.

Other changes in this 2018 system are slightly thinner keycaps: around 1.25 mm, or about 0.25 mm slimmer than the old keys. That may well be to better accommodate the silicone while still preserving sufficient key travel when pressed. It also, however, makes the keycaps easier to pop off. The biggest change, though, is the spacebar, which now apparently detaches far more readily – and less destructively – than the old design.

Still, even with all the tweaks, the keyboard remains potentially worrying. The leaked service center guide, which broke cover earlier today, is a good example of that: break the silicone barrier just once, Apple points out to its tech team, and the whole top case of the MacBook Pro will need to be replaced.