If you’re not an exhibitionist, I’m pretty confident in saying the 2018 Lamborghini Aventador S Roadster is probably not the car for you. Taking the automaker’s most outrageous model and lopping off the roof hardly makes for a vehicle less ostentatious, after all. The Italians may be flirting with practicality with the upcoming Urus SUV, but don’t even dream of thinking they’ve lost sight of why Lamborghini is a poster mainstay on bedroom walls.

Straight line performance is immense. 0-60 mph comes in 3.0 seconds, a tenth of a second slower than the coupe, while the top speed remains 217 mph. The acceleration takes you like the double-handed grip of a particularly insistent deity and resolutely presses your body into the leather and Alcantara trimmed sports seats, as though it’s trying to mold them a new layer of human hide. 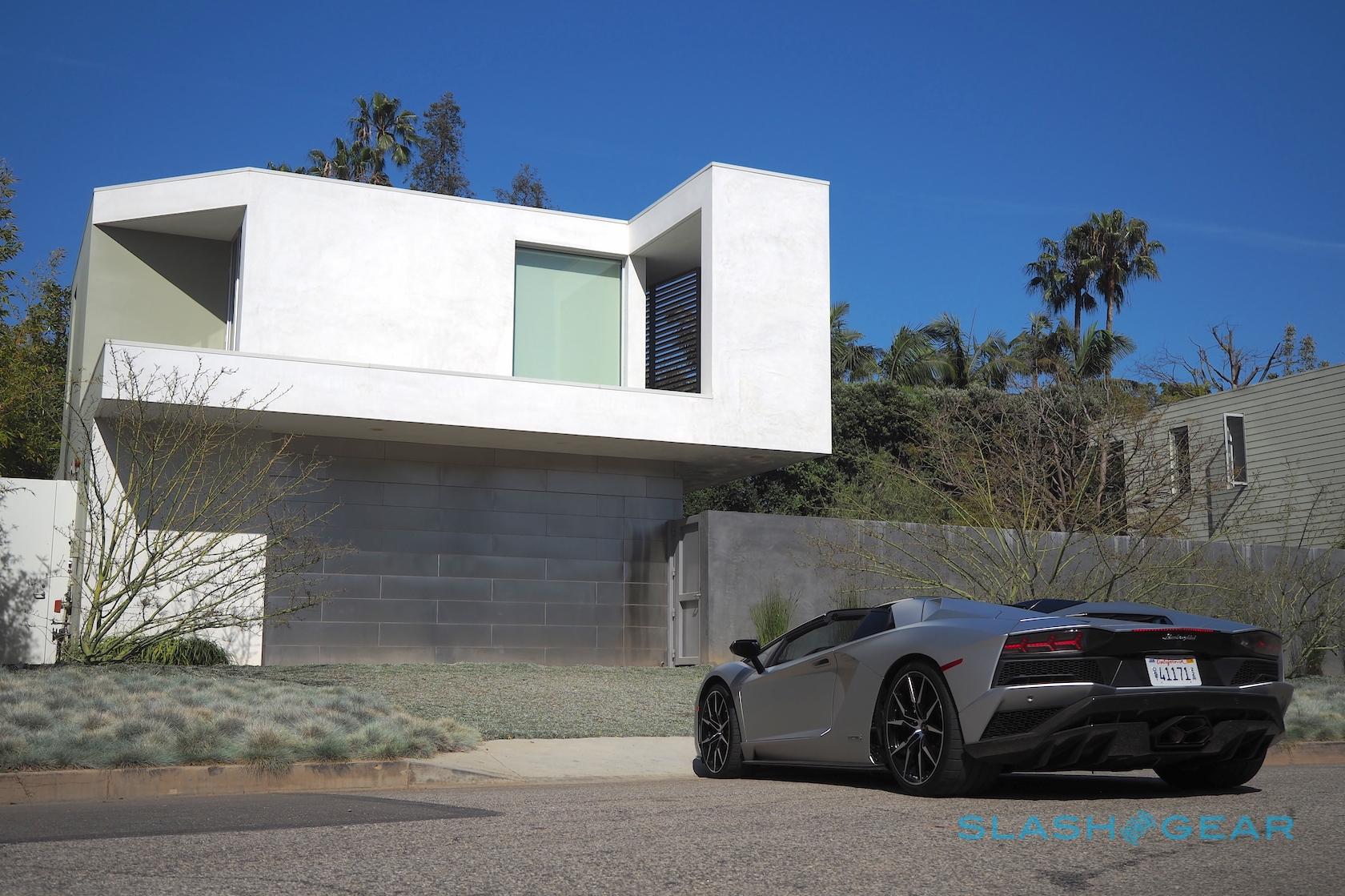 There is one very good reason why you should walk straight to the roofless Aventador S when you enter the Lamborghini dealership, of course, and that’s the soundtrack. In a world where ridiculous horsepower is being wrung from ever-smaller, turbocharged and supercharged engines, Lamborghini’s naturally-aspirated V12 is looking more and more rare. With those bragging rights come the sort of mechanical music that haunts your dreams.

It’s a howl, and a roar, and a ragged-edged bellow, and a chorus of trumpets and horns, hammering your senses from what feels like all directions. Windows down, roof off – its twin pieces stowed in the front trunk, and filling it completely – and the tiny rear glass lowered, there’s little to stop the siren song of the Aventador S’s 6.5-liters from making their glorious presence known. There’s a reverberation that comes along with it, a body-shuddering thrum that never allows you to forget that there’s 730 horsepower and 509 lb-ft. of torque happening right behind you. 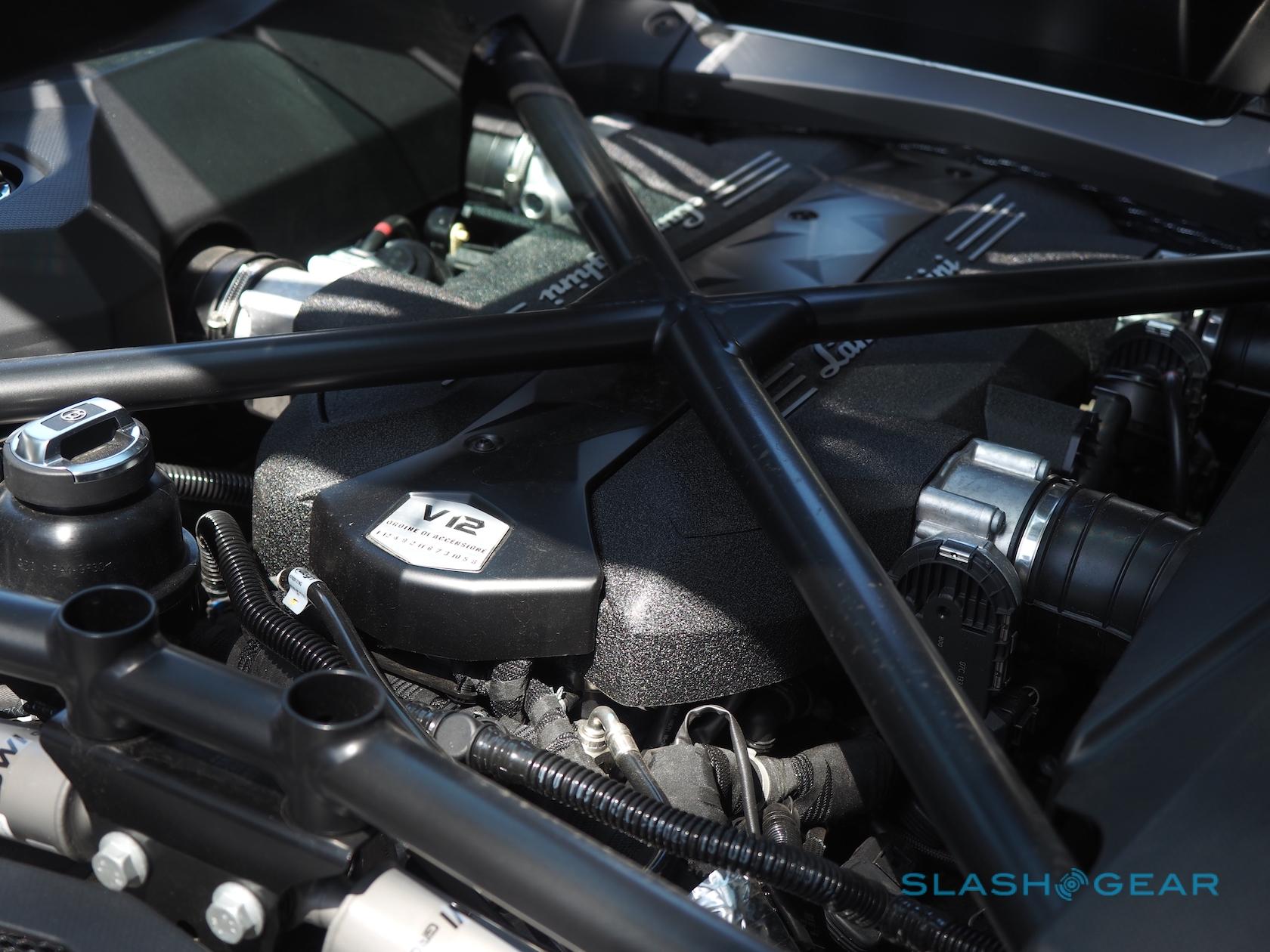 Not that there’s much chance of you overlooking it. Lamborghini wisely directs that surfeit of power down to the road via all four wheels, each equipped with pushrod-activated springs and magneto-rhelogical dampers. Electrochemical trickery allows them to adjust their firmness in milliseconds, responding to the road conditions and how foolishly you’re driving. 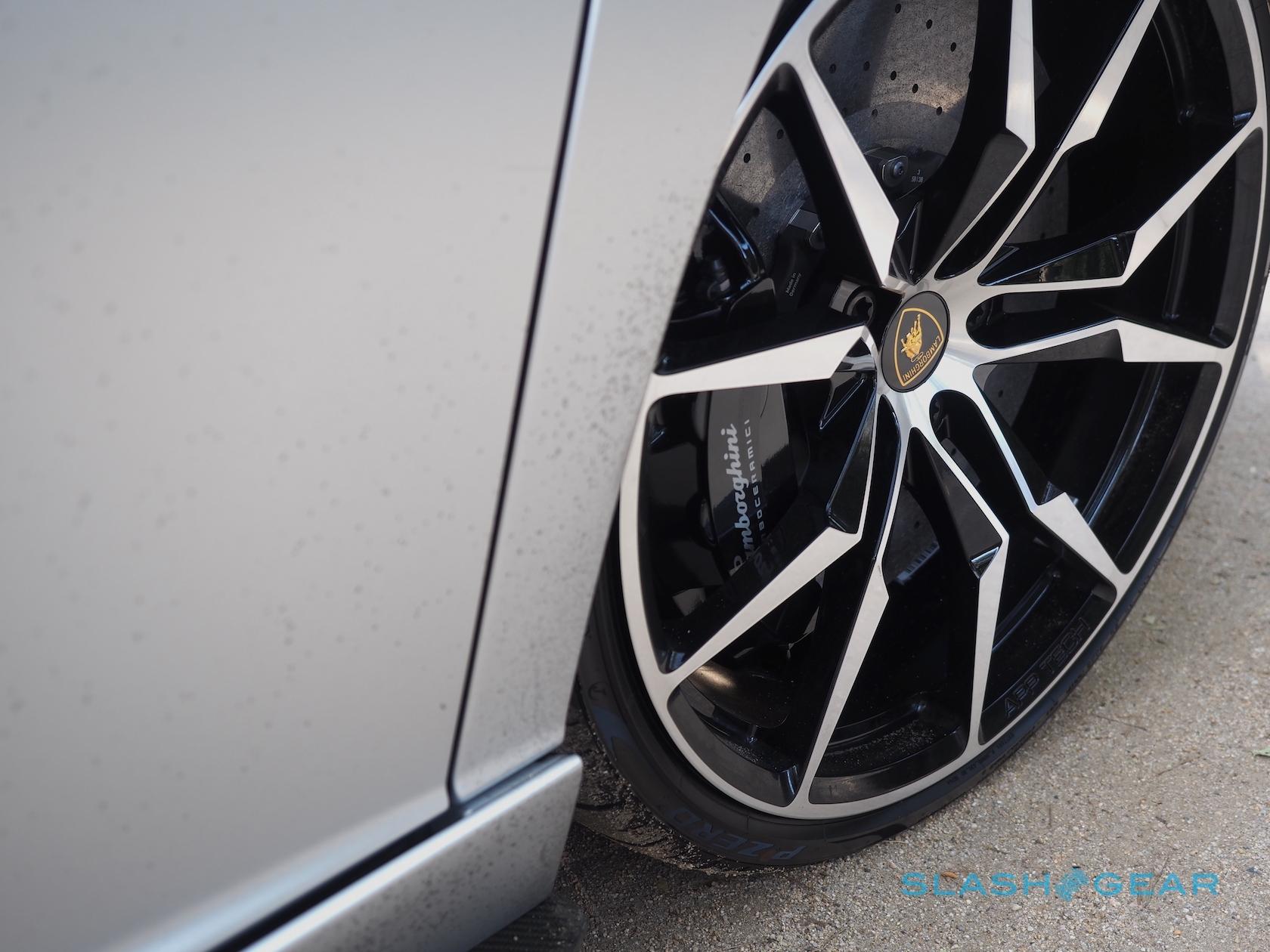 There are four drive modes, none of which pretends to be subtle. “Strada” is the Aventador S Roadster’s street mode, still as loud and firm as some sports cars are with their settings at the most manic. “Sport” kicks the engine, transmission, steering, suspension, and stability control up a notch, while “Corsa” – Italian for “Race” – sets things to maximum aggression. Finally, there’s an “Ego” mode, fittingly named as you can eschew the Italians’ expertise and combine your own choice of settings in each category. 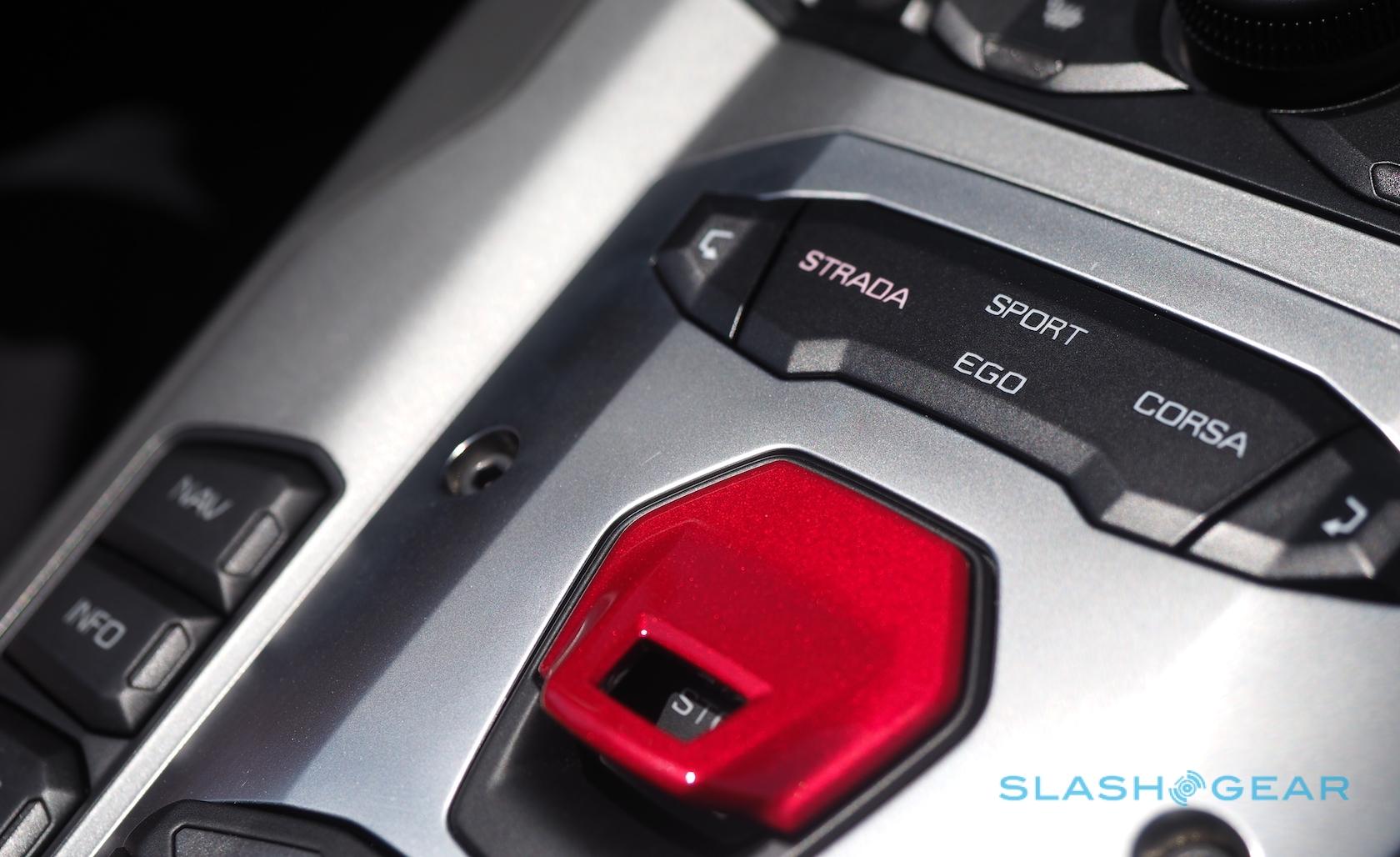 The roar is the constant, only increasing volume and fury as you step through the modes. Whichever you choose, though, the Aventador S Roadster corners with a levelness that’s fairly astonishing for a 3,583 pound convertible. Grip is prodigious, though Sport and Corsa modes will allow the tail to swing out if so provoked.

There’s four-wheel steering now, part of the S upgrade over the original Aventador Roadster. At low speeds it’ll tighten up the car’s turning circle; at higher speeds, it promises more surefooted cornering and lane transitions. The dynamic steering, meanwhile, varies the degree you need to turn the wheel according to the speed you’re going. Both take a little getting used to. 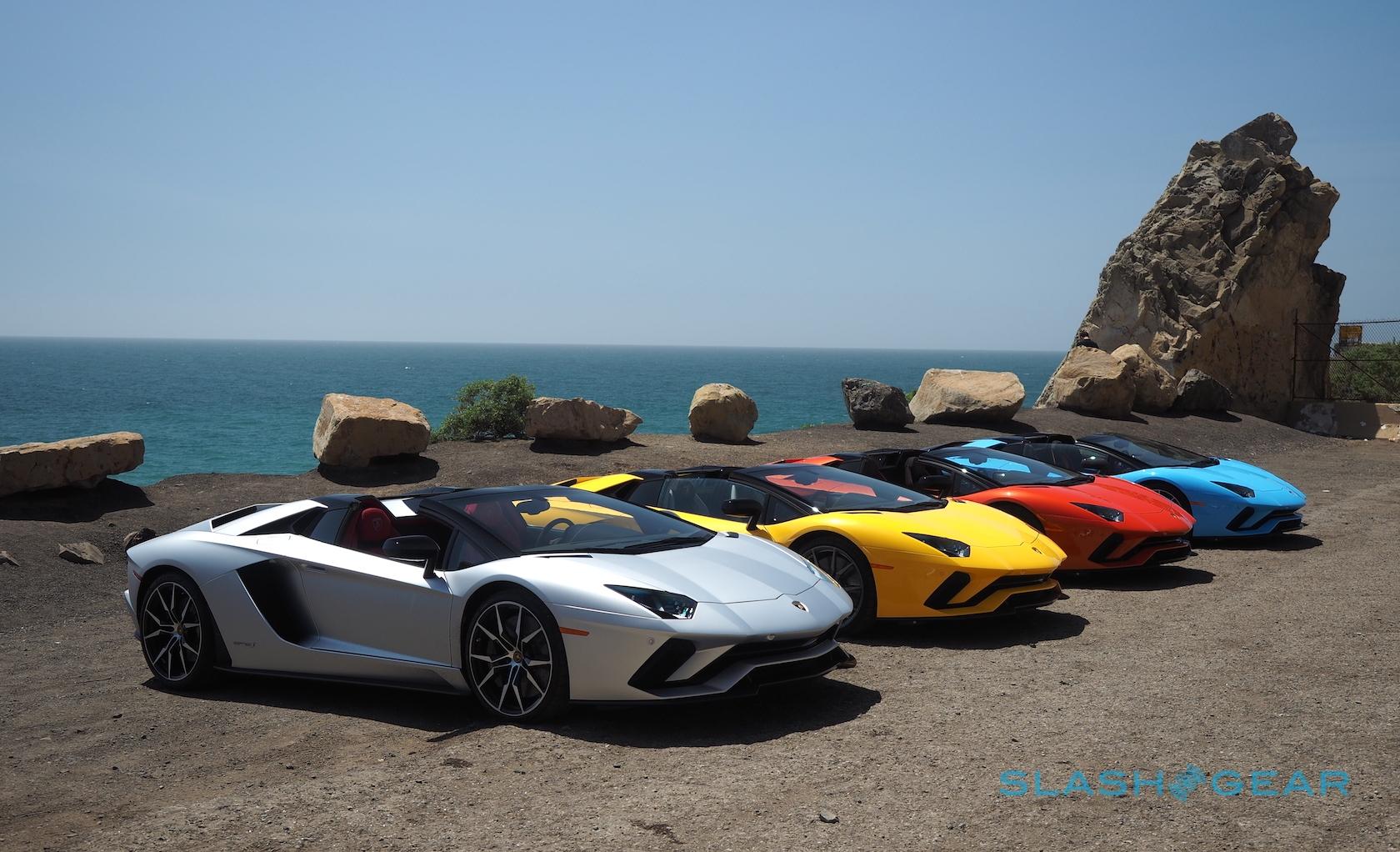 $460,247 doesn’t buy you perfection, you see. Cabin visibility is so scant as to give you palpitations if there’s a curb within six feet, and the infotainment system has a screen and interface that could learn a trick or three from what’s recent by stablemates Porsche and Audi. Given sufficient time I suspect I’d have got to grips with the smattering of controls and their confusing layout, though I don’t know if I’d forgive the plastic buttons. 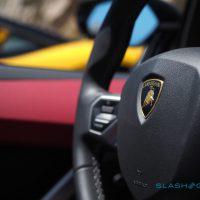 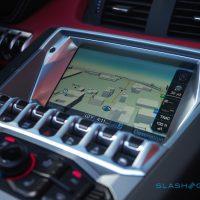 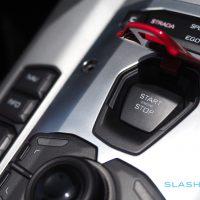 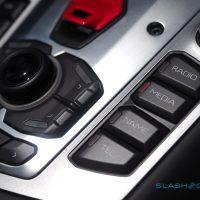 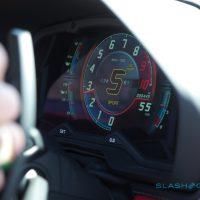 In the tighter turns of the Santa Monica Mountains, meanwhile, the size of the Aventador S makes itself known. Close canyon walls aren’t exactly conducive to relaxation when you’re driving a half-million-dollar supercar only a couple inches narrower than a Hummer H1. Thankfully I was too busy wrestling the transmission to focus too much on the potential for scratching paint.

The 7-speed single-clutch automated-manual transmission proved frustratingly slow to downshift when left to its own devices in the more aggressive corners. Happily the lengthy paddle shifters make it far easier to handle the gearshifts yourself; even when you’re also trying to concentrate on hairpin turns, the engine’s sky-high 8,500 rpm redline gives you plenty of headroom for those late upshifts. Alternatively it’s an invitation to let the V12 sing. 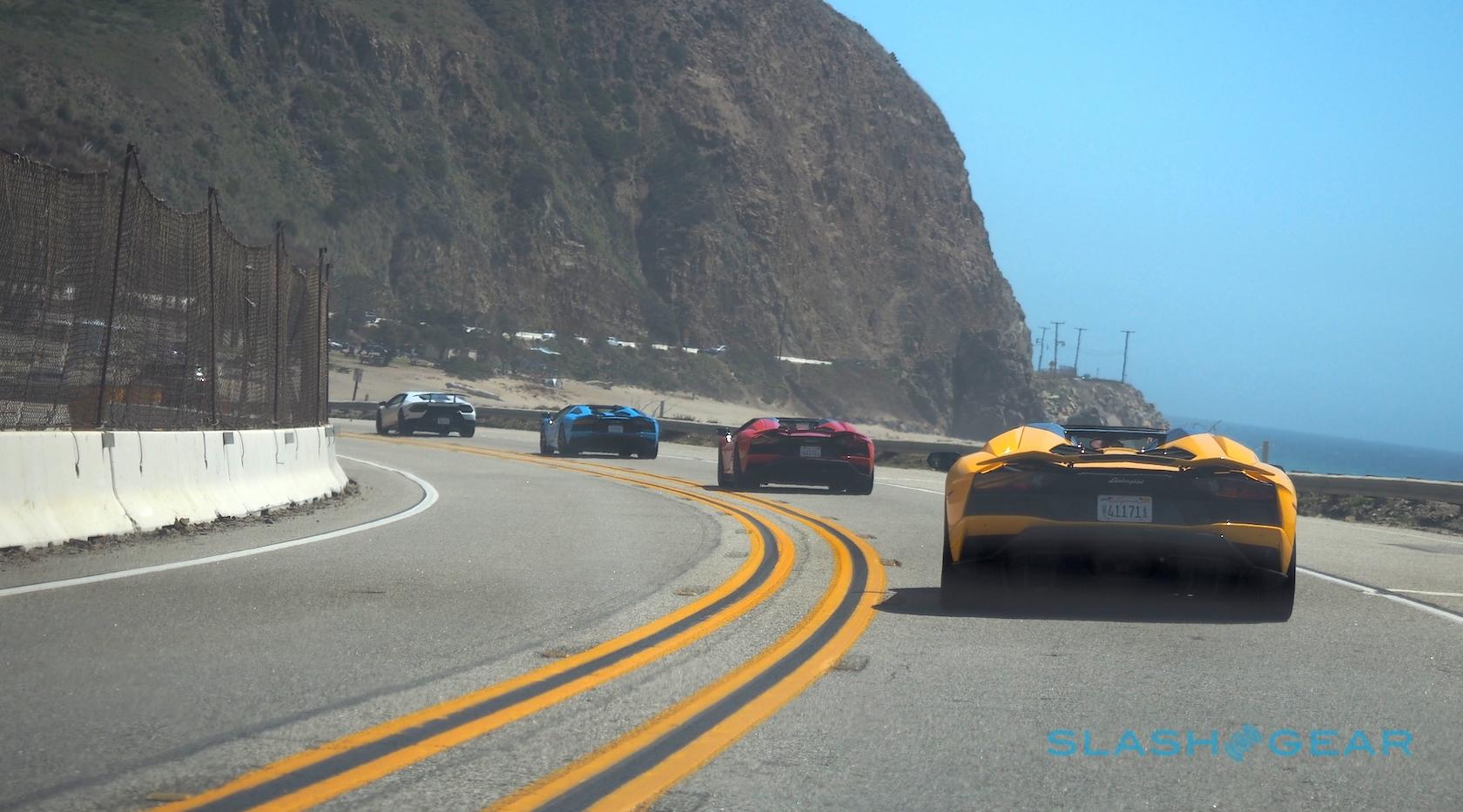 Whether auto or manual, the transmission has an action like a Vulcan cannon, slamming the next ratio into place with a distinctly mechanical sound. Lamborghini says shifts take place in 50 milliseconds, and you’ll hear and feel every one of them.

All this bombast, you see, is by design. If you want modernity and scalpel precision with the Lamborghini badge on the snout, a 2018 Huracan Performante is about as fast, far easier to hustle around a tight track, and considerably cheaper to boot. You can even get a Spyder drop-top version of it now, too. 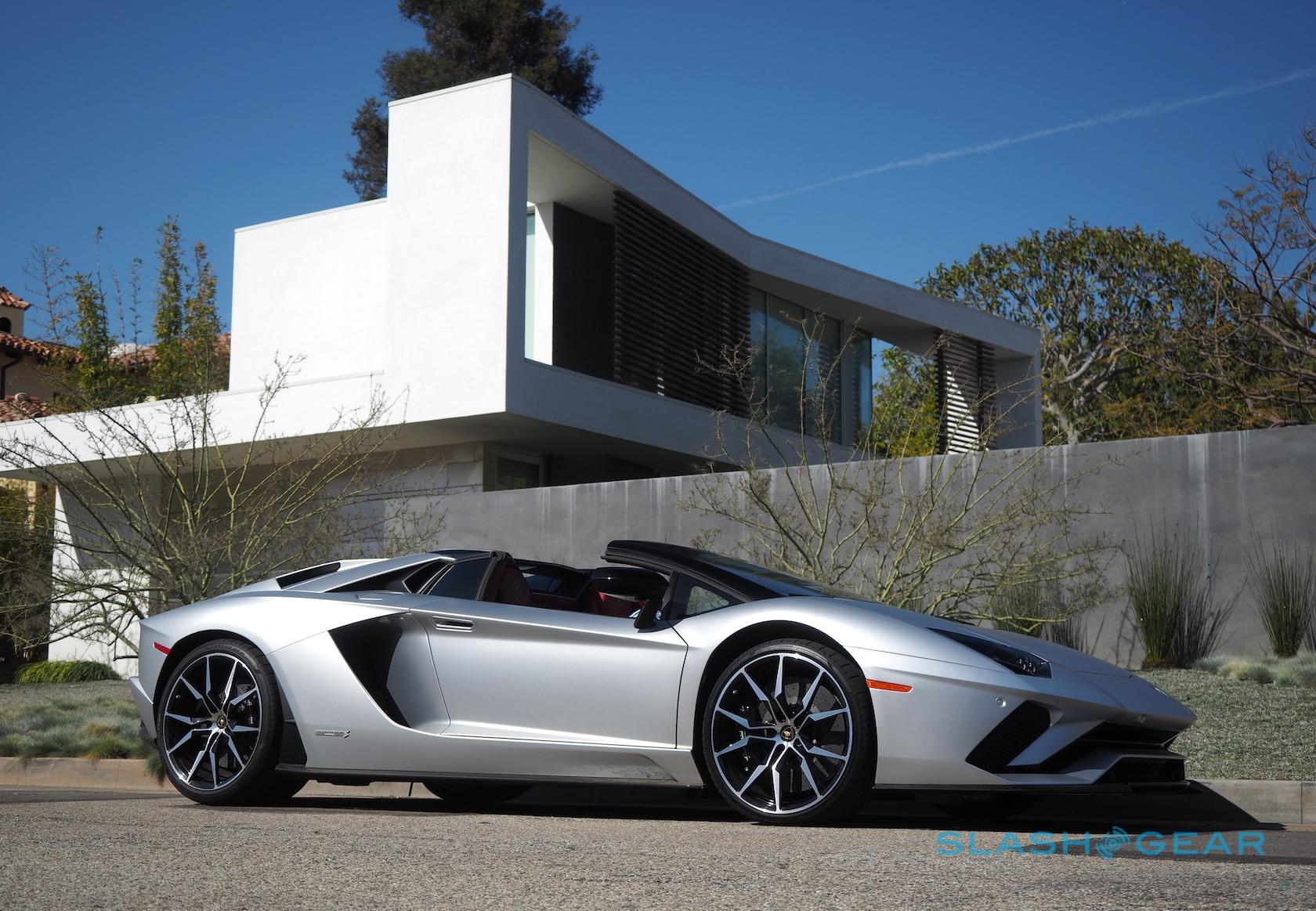 It’s very much a “new” Lamborghini, however. The Aventador S Roadster, in contrast, is a Lamborghini of the old school. Fire, brimstone, attention demanding, and yes, provoking of sweaty armpits because it’s expensive and unruly and everybody is looking at you, just about all of the time. It’s spectacle and unashamed pageantry, and Lamborghini taking the roof off only shaves away what little separation between you and the madness remained.