All-wheel drive systems in sports cars like the Audi R8 are a little like boxing gloves, in that the added safeguards give the people behind them the confidence to attack past their usual means. A bare-knuckle pugilist is less likely to put hand-bones vs face-bones to the test with a full force skull punch, but shod them with a padded mitt, and they’ll have no issue ringing the other guy’s bell all night long.

Similarly, give a driver a car that has the front wheels aiding the rears by doing some of the driving, and they’ll probably feel braver on a track’s more harrowing features. The difference is, a boxer won’t walk away from a victory with a sense that using gloves is sort of cheating. You’ll hear many a track session tale end with someone mentioning that the all-wheel drive car “did all the work” for those who escaped a circuit unscathed. It’s for these folks that Audi now offers the R8 RWS, the first rear-wheel drive version of its famous sports car. 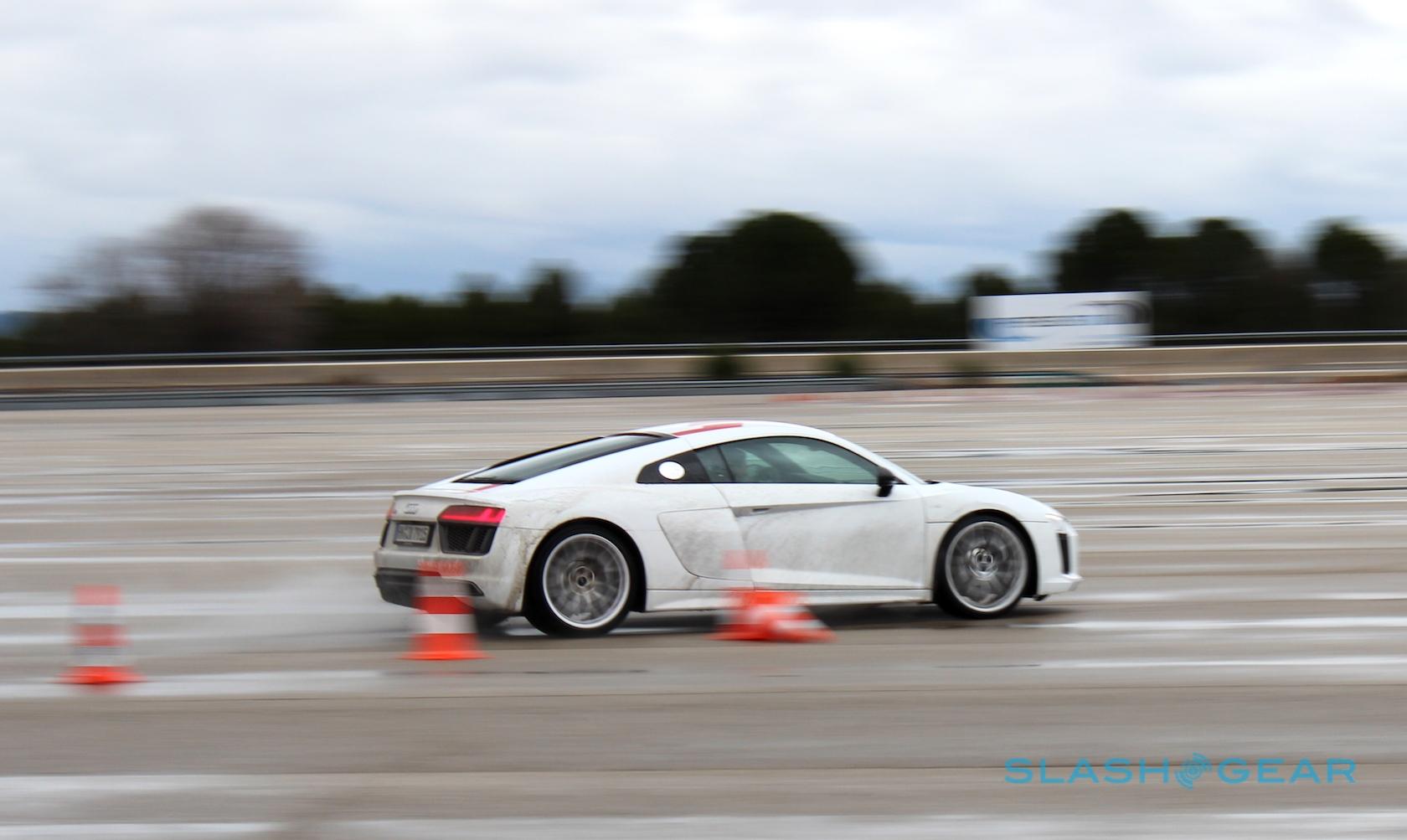 The Audi R8 RWS – or Rear Wheel Series – comes to us from Audi Sport, the automaker’s performance division analogous with Mercedes AMG or BMW M. Formerly called “Quattro” to be in line with Audi’s all-wheel drive speciality, the name was dropped in 2016. Free of the specificity that its former moniker beheld them to, Audi Sport was now able to satisfy the demand by some for a “pure” version of the R8.

Like the standard R8, the RWS is saddled with a mid-mounted 5.2-liter FSI V10 engine that churns out 540 and 398 pound-feet of torque. This is married to a seven-speed S tronic dual-clutch transmission. Power now goes right to the back end for the duration of your enthusiastic ride. 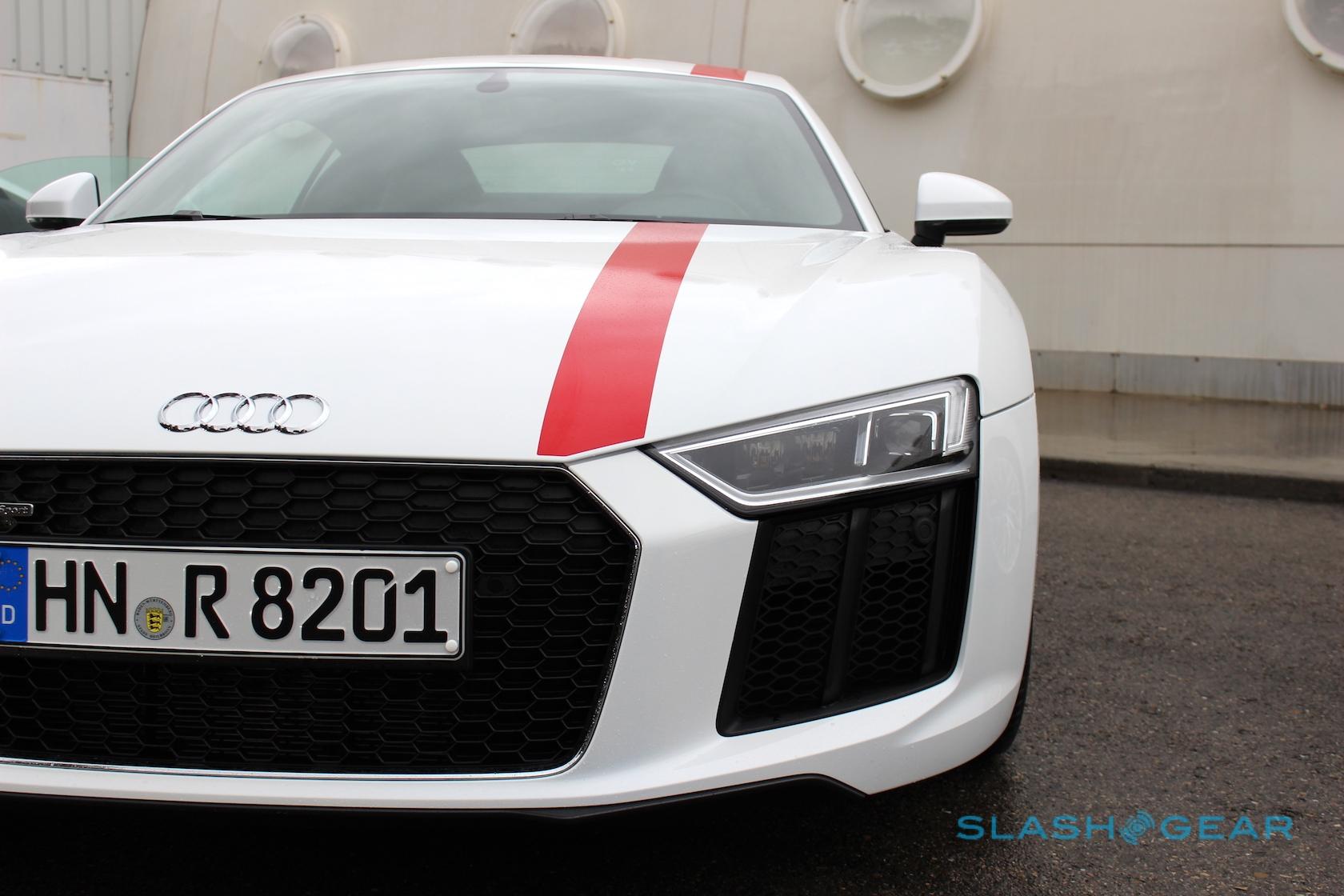 The attentive will pick up on the whispers that speak to the differences between the RWS and the standard R8. Matte black design elements like the single frame grille and air apertures on either end of the car will be your first clue. More pronounced indicators include the R8’s signature side blade matching the body color and the “1 of 999” badge found on the dashboard. If the whispers aren’t getting the message across enough for your liking, your RWS can shout it out loudly with an optional off-set graphic stripes that streak across the shiny side.

Inside, the R8 RWS retains the two-passenger leather-and-Alcantara-wrapped interior of its sister models. The “1 of 999” badge sadly doesn’t change depending on the car; you’ll have one of 999, you just won’t know which one.

Behind the wheel is the Audi virtual cockpit, the 12.3-inch TFT monitor that is the sole interface for Audi’s MMI infotainment system. It’s a driver focused car, after all. The fully digital display is brilliant in both color and functionality, displaying all the necessary gauges, but can also be expanded to display whichever relevant menu you wish to view in full screen mode. The best example of this is when navigation is used, displaying a fullscreen map and directions of the road ahead within a simple glance downward.

It’s amazingly useful when out tackling unfamiliar backroads allowing the driver an easy way to plan for upcoming bends. The virtual cockpit can also be quite handy on the track, either as an impromptu Google Earth-powered track map, or in Performance view. This setting places the tachometer front and center, coupled with colored shift indicators in manual mode that are easy to see in your periphery as your attention is focused on the circuit ahead.

If you need a break from the song of the V10 sitting behind your head, a Bang & Olufsen sound system surrounds the cabin to facilitate your auditory desires. A 550-watt amplifier controls 13 speakers – two of which are in the head restraints – and are matched with a subwoofer in the front bulkhead.

The rain in Spain tries in vain to make us hydroplane

By this point, the SlashGear crew is intimately familiar with the Audi R8, and climbing in the car feels like slipping into a trusty pair of running shoes. We were curious as to just how drastic the difference between the RWS and the quattro-fied R8 were. As it turns out, it’s not particularly drastic.

The RWS is all about subtracting more than adding, nixing the driveshaft and differentials that would normally send power to the front wheels. Audi then re-tuned the suspension to better accommodate the pure rear-drive performance of the car and sent it out the door. This amounts to about 110 lbs in weight savings from the standard R8 V10 coupe, giving the RWS coupe an unladen weight of 3,505.3 lbs. 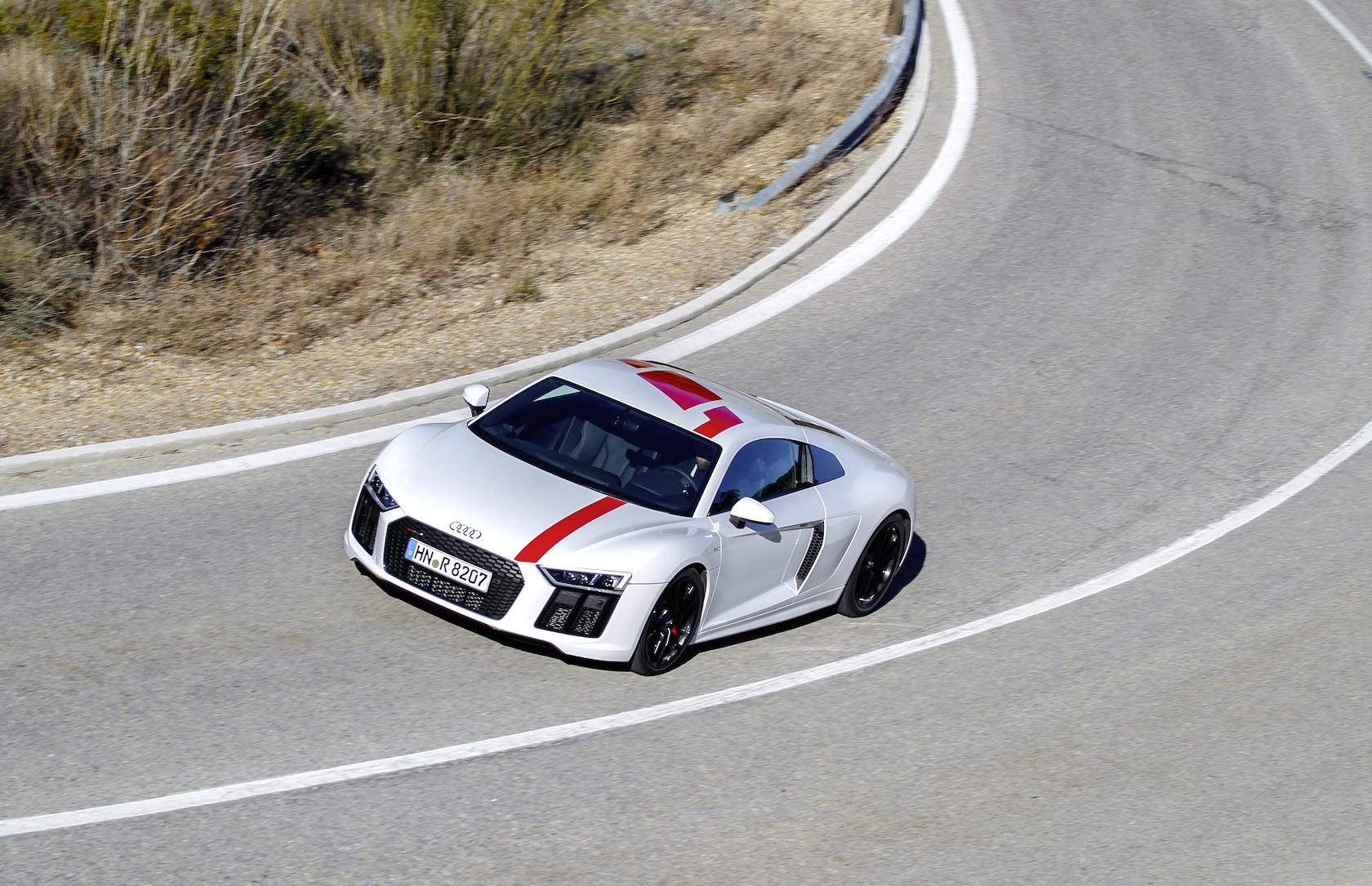 Our testing grounds were the rainy mountain roads north of Madrid, Spain, and our R8s were shod in 20-inch winter tires. 19-inch wheels fitted with Pirelli P Zeros are the standard sets, but semi-snowy conditions required our testers to be set up to favor their odds of being returned intact, so the optional 20-inch wheels got the cold rubber treatment.

Soggy as the roads were, the R8 performed with the poise we’ve come to know from its other incarnations. You’d be unsurprised to know that the R8, all-wheel or rear-wheel, is a fairly well composed car, and the removal of quattro doesn’t catastrophically skew the formula. On the road, the car delivers its 540 horsepower with clinical smoothness, and its electromechanical power steering responds to inputs with an equal crispness. In fact, the experience is rather tame, as much as barreling on soaked mountain roads in a 540 horsepower sports car can be, anyway. Audi’s stellar coupe is the opposite of unruly and, even in the worst conditions, it takes a lot of abuse to provoke it into biting back. 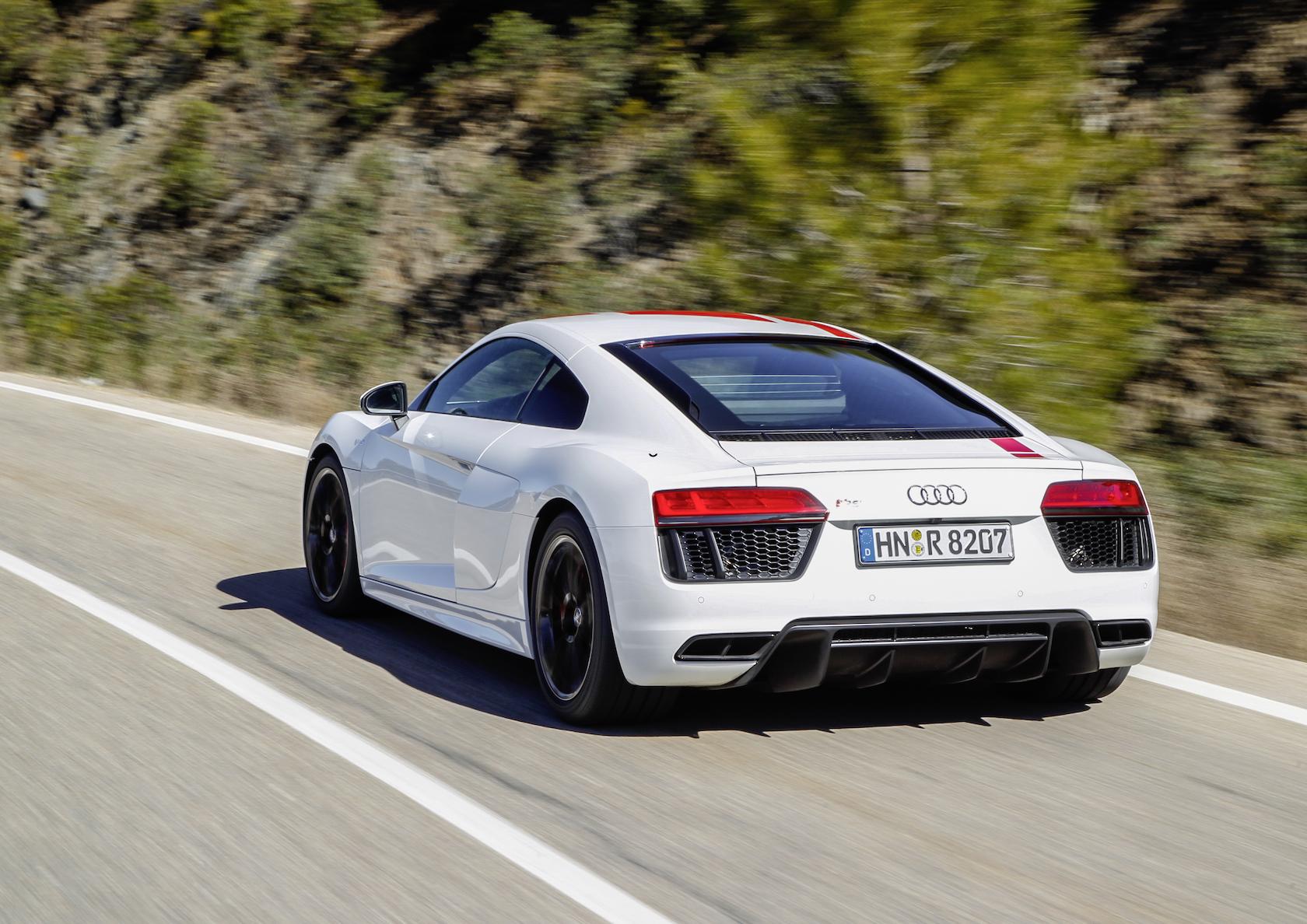 We concluded our road drive with mixed feelings. On one hand, the RWS is still a great R8 and is in no way “broken” or “ruined” by a layout heretical to the core of Audi’s performance. Of course, why would it be? After all, it shares 60-percent of its components with the R8 LMS GT4 race car. If it’s good enough for Daytona, it should be good enough for the likes of you and me. That aside, those expecting the car to feel more “raw” or “pure” will probably be disappointed to hear that the RWS isn’t the head-bashing Mr. Hyde to the R8 V10’s Dr. Jekyll.

Would the story be different on the track? We’ll have to wait to find out. In a perfect world, we’d have an R8 V10 and an RWS at a track and drive them back-to-back where we suspect the differences would be far more palpable, though probably not staggeringly different. In lieu of this, an open area of a nearby military vehicle testing facility had a course of cones arranged for us to use the Audi in a manner unconventional for an R8: Drifting.

Here it is, the one thing 999 R8 owners get to say they can do better in their precision sports car. Like its cousin, the Lamborghini Huracán RWD coupe, the Audi RWS allows enthusiasts fun with an electronic safety net. In “Dynamic” mode, the R8 can freely kick the back end out, but go too far, and the ESC will step in and try to right your wrongs. In practice, it feels like answering the call to join a pickup football game while still in business attire, but after the tie is metaphorically loosened, all reservations quickly fade. Each corner quickly felt like a part of our own personal Miami Vice-style chase scene, with the R8 free to fly around a corner and fan out in perpetuity before targeted for the next set of cones. This, it seemed, was the raw experience some R8 shoppers were looking for. 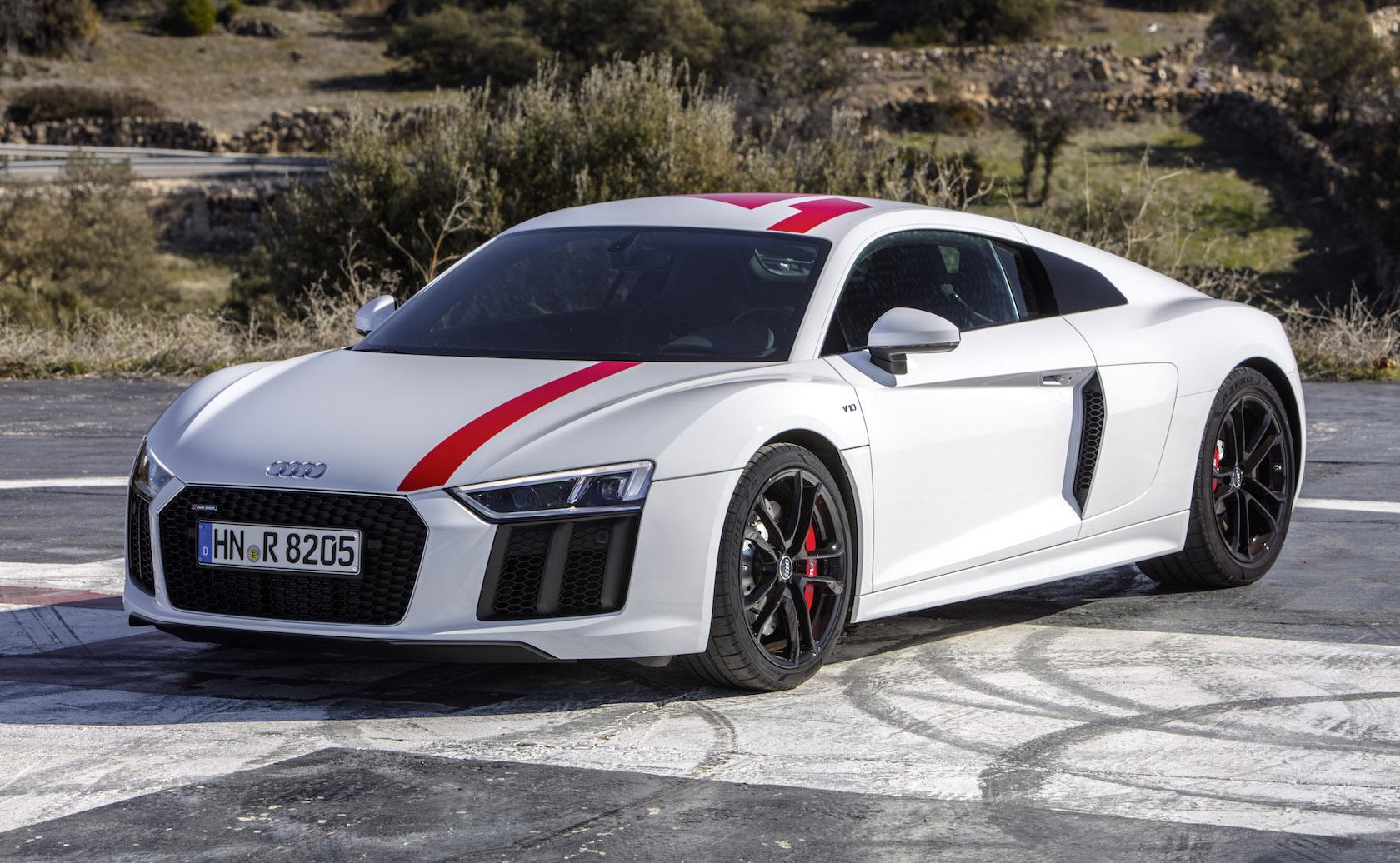 With that said, the limited nature of the RWD’s production began to make sense. 999 will hit the roads globally, with 320 coming to the United States. That feels about enough to satisfy anyone who thinks the R8 is too well behaved, though they’ll find that quattro isn’t the gatekeeper of shenanigans they presume it to be. Could you drift an R8 V10 as we did in the RWS? Probably, but the RWS certainly made it easier.

Appearing stateside as early as this summer, Audi have pleasantly avoided charging more for less functionality. Though official pricing has yet to be announced, anyone looking to be one of 320 can be assured to know that the RWS is expected to come in below the standard price of the R8 V10, which starts at $164,900.

Those who have the means to purchase an R8 and yet haven’t done so by now have little reason to overlook what the four rings has to offer. We’d still recommend the standard R8 V10 for its extra performance capability, but for those looking for an R8 strictly for road use, the price and the unique nature of the RWS can’t be beat. 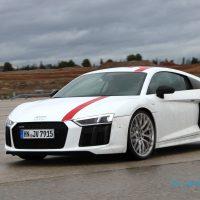 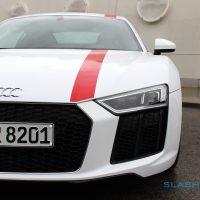 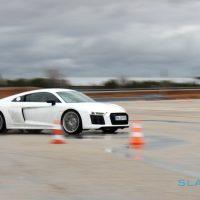 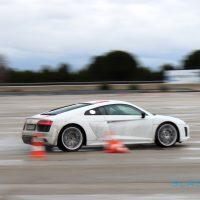 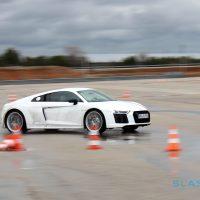