First the bad news: just because Aston Martin is adding a V8 engine to the DB11 lineup, doesn’t mean that the car is much more affordable, just in case you’ve been holding out. Indeed, if price is important to you, then might I divert your attention to the 2018 Lexus LC 500 instead. The V8-powered DB11 is on an entirely different level, distinguishing itself intriguingly when compared to the driving dynamics and characteristics of the 600 horsepower V12 DB11 we drove earlier this year.

Even though the two cars are essentially the same, beyond their engine and a few exterior changes, the two cars handle in a completely different way. Aston Martin President and CEO Andy Palmer says it best: “we’re not in the business of making Russian nesting dolls.” All the same, you’d be forgiven if with the two cars side-by-side you couldn’t tell the differences. Happily I’ve got you covered – along with chief officer and studio head at Aston Martin, Marek Reichman – and can walk you through the subtle changes in the design elements between the 12-cylinder and V8 engine. 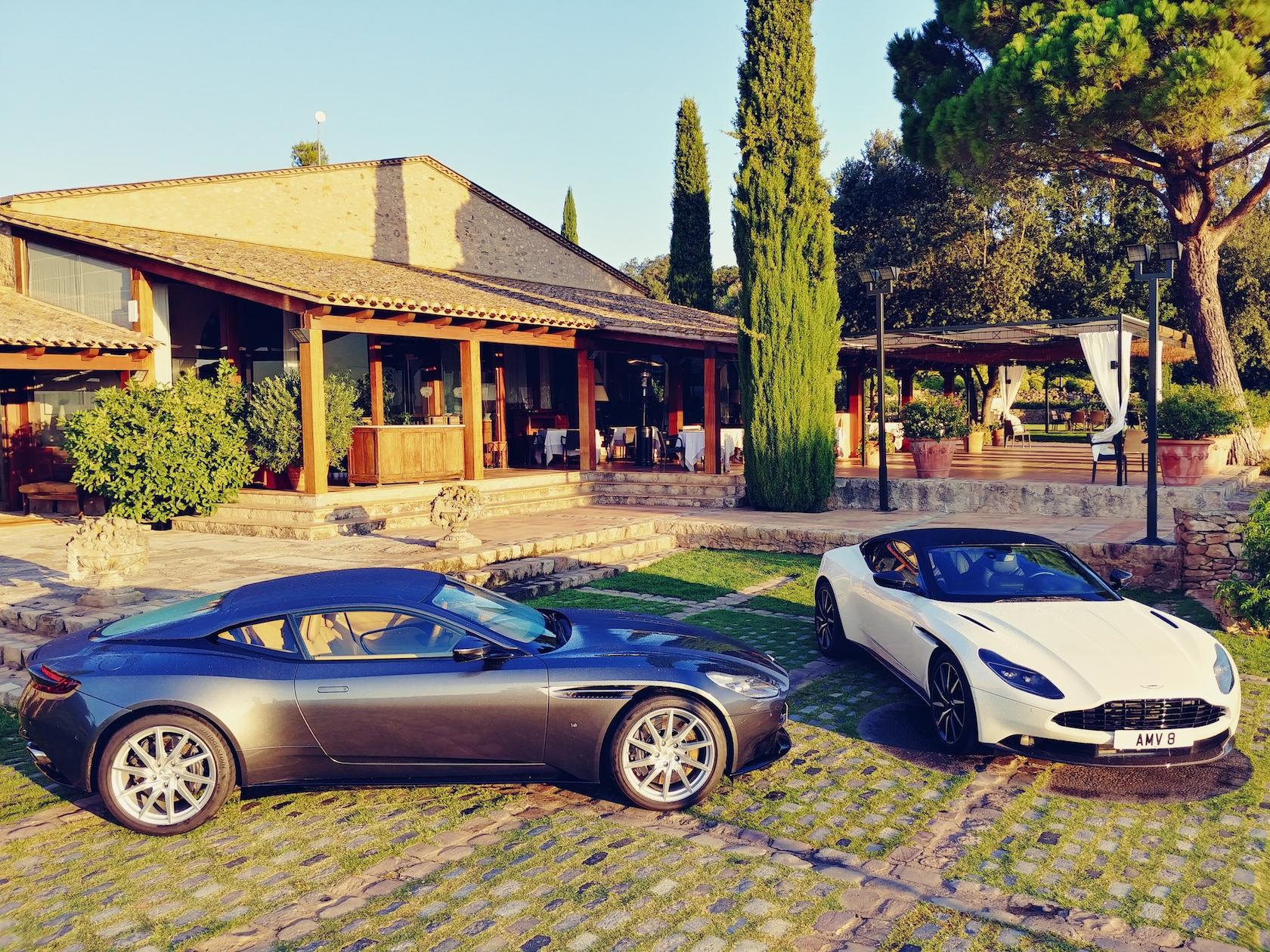 What’s changed on the V8? 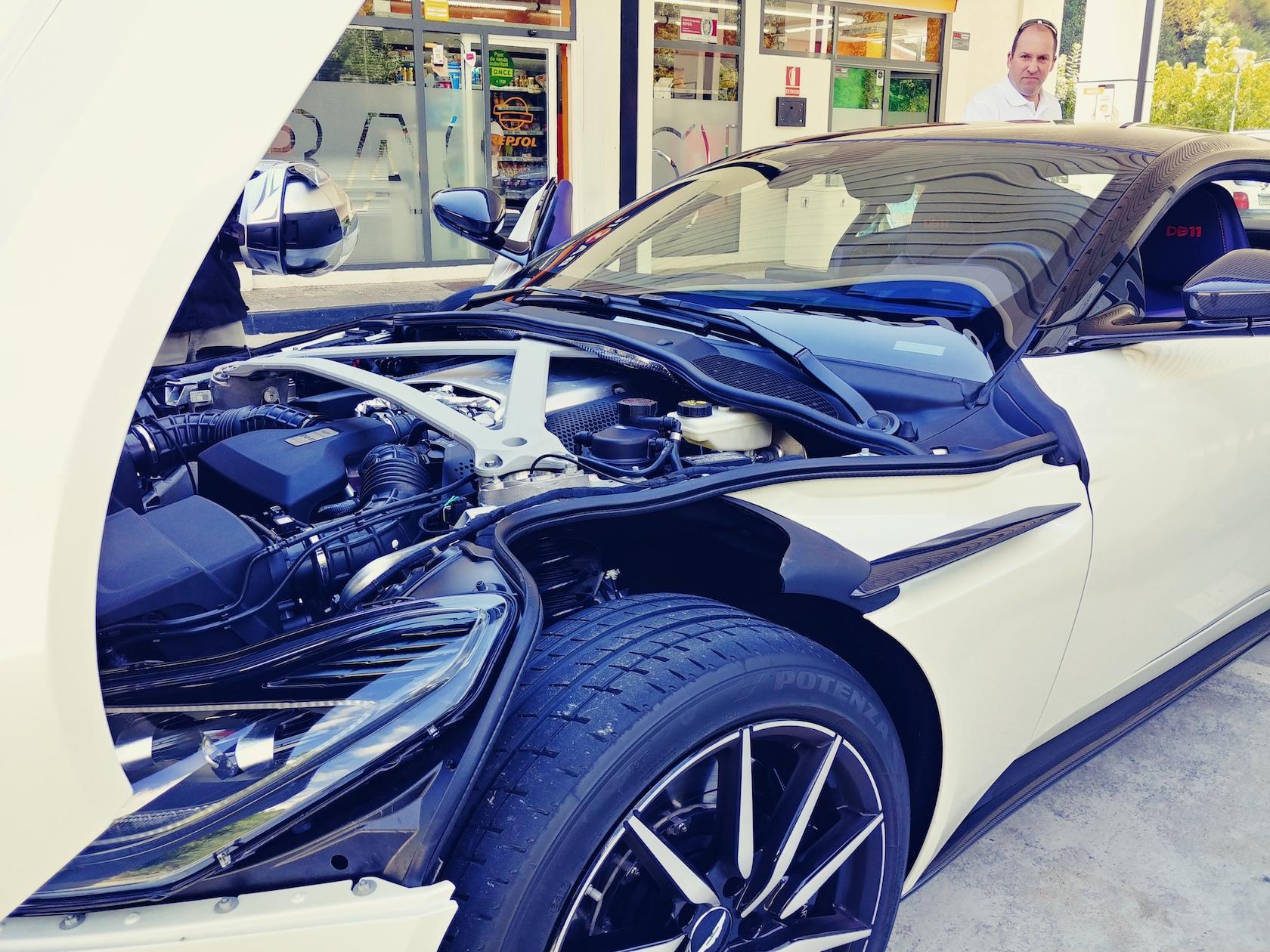 “Obviously, we designed them together, we designed them concurrently because we just have to, it doesn’t make any sense to design the V12 and then start looking at the body of the V8,” Reichman explains. “The V8, because it’s a hot-V, doesn’t need the exiting air that’s needed for cooling on the V12.” Instead, a new method of cooling down the V8 was utilized: in the process, the central “nostrils” on the hood were omitted, since the forced air over the top of the engine is used to cool down the turbos. It also changes the driving dynamics of the car, introducing a more agile, sport-like character. If you’re still hunting for design differences, the color of the front lamps is also subtly changed, while the V8’s rear lamps are “smoked” in color. 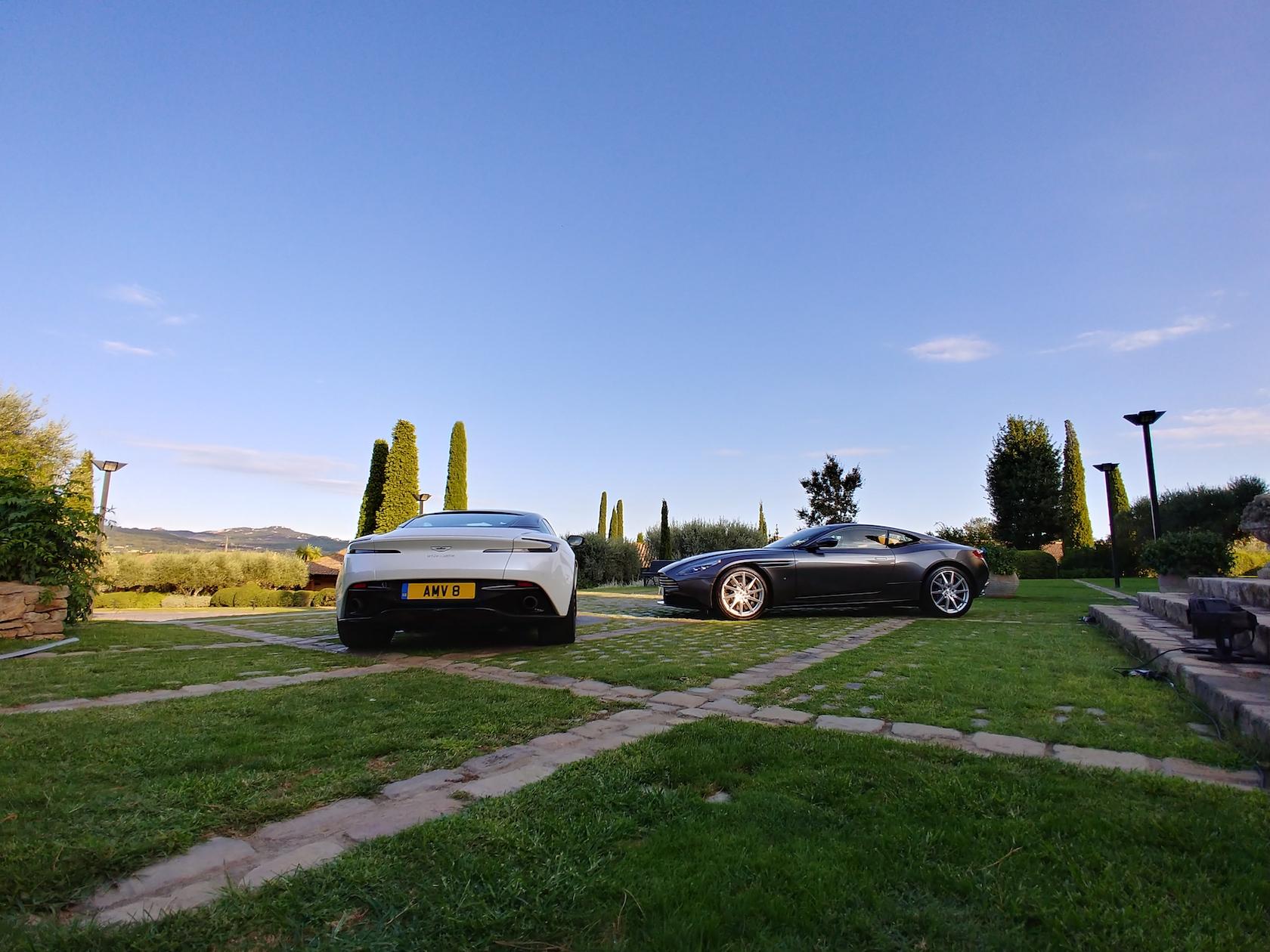 Of course, one of the nice things about buying an Aston Martin is that there’s some flexibility there. When asked if a customer request for the “nostrils” in the hood would be honored, Reichman’s short answer is yes. Still, he points out, it would most definitely change how the V8 DB1 handles. Ironically, extra vents would end up leading to poorer cooling, since with them there might not be sufficient air to cool down the engine. 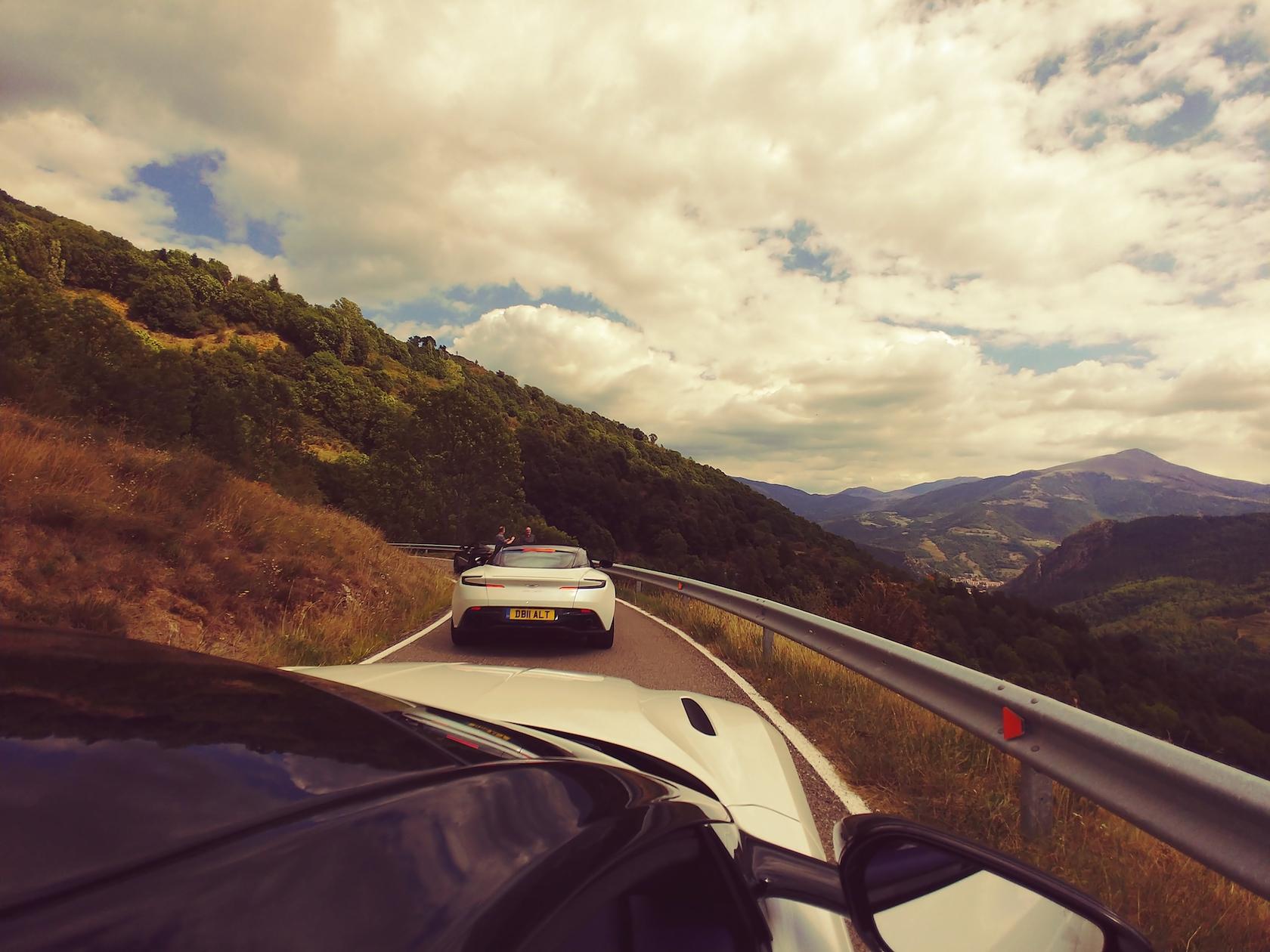 The subtle changes don’t bother me one iota, mind, because Reichman has kept the design essence of the DB11 the same: it’s clean, sleek, and generally gorgeous. It certainly achieves Palmer’s self-imposed goal of not only “creating cars that look beautiful, but drive beautifully.”

About that driving. Aston Martin starts out with a Mercedes-AMG sourced twin-turbo 4.0-liter engine, good for 503 hp and roughly 513 lb.-ft of torque. That’s a whole lot of thrust to get you into trouble, and quickly. Combine all that horsepower with the 253 pound weight saving compared to the V12 – overall curb weight dips to 3,758 pounds – and you’re looking at 0-62 mph in just 4 seconds flat. What the on-paper figures don’t tell you, though, are how it actually feels from behind the wheel. Here, you find some surprises.

Between the two cars, the V12 is undoubtedly the grander of the two, but – and this is an awfully big BUT – if you want a truly amazing supercar that’s capable of handling nearly all driving conditions, I actually think you ought to opt for the V8. The drive routes Aston Martin mapped for us in Barcelona were some of the best I’ve experienced, and made it very clear that the V8 DB11 is the driving enthusiast’s coupe.

First came the highway driving, followed by some spirited surges through the mountainsides. Then there were stretches of the drive route where I thought to myself, “no freaking way is this beast is going to make it through there!” My drive partner – who turned out to be, happily, one hell of a driver – proved me wrong. We’d been driving for hours and I was starting to get the sense that we were running out steam… up until we started to ascend a rapidly narrowing stretch of road that was as beguiling as it was terrifying. Think two-way traffic, only on a road roughly the width of the DB11 itself.

How did the Aston Martin do? Exceptionally well, particularly in Sport+. The exhaust notes truly come to life, firing with an unusual 1,5,4,2,6,3,7,8 order which is the signature of the automaker. Suddenly the car perks up, poised and eager, ready to elegantly pounce its way through the challenges ahead. It literally drives like a smaller car than it really is and, because of the engine placement and how it makes the front end lighter, the turn-in feels noticeably sharper than that of the DB11 V12. Unsurprising, then, that Palmer explained to me that the V8 car’s suspension was tuned completely differently both front and rear, squeezing out the sporting best of what’s still a luxury grand tourer.

Some things you can do with electronics; other times, only sheer physics can suffice. Aston’s engineers managed to push the powertrain completely behind the front axle, dropping it into the body of the DB11 as low as possible, for an optimized center of gravity. Because the V8 is so much more compact than the V12, it makes a far bigger difference than missing four cylinders might suggest: there’s a massive, gaping hole north of the engine. And yes, that’s a good thing. Throw in new ECU software and a reprogramming of the engine and throttle mapping, and the reason for the very different on-road feel becomes clear.

It’s that which leaves the V8 DB11 feeling no less special than its stablemate. “As an engineer I find the DB11 a fascinating car. One with great depth of character and ability,” Aston Martin Chief Technical Officer Max Szwaj told me. “Of course, the V12-engined variant is an icon – an ultimate, if you like – but the V8 is very much its own car. One with a distinct and carefully crafted character that’s truly seductive. It has been hugely rewarding to put our stamp on this new engine – both in the way it sounds and performs – and to use its impressive attributes as the impetus to reveal a little more of the DB11’s sporting character.” 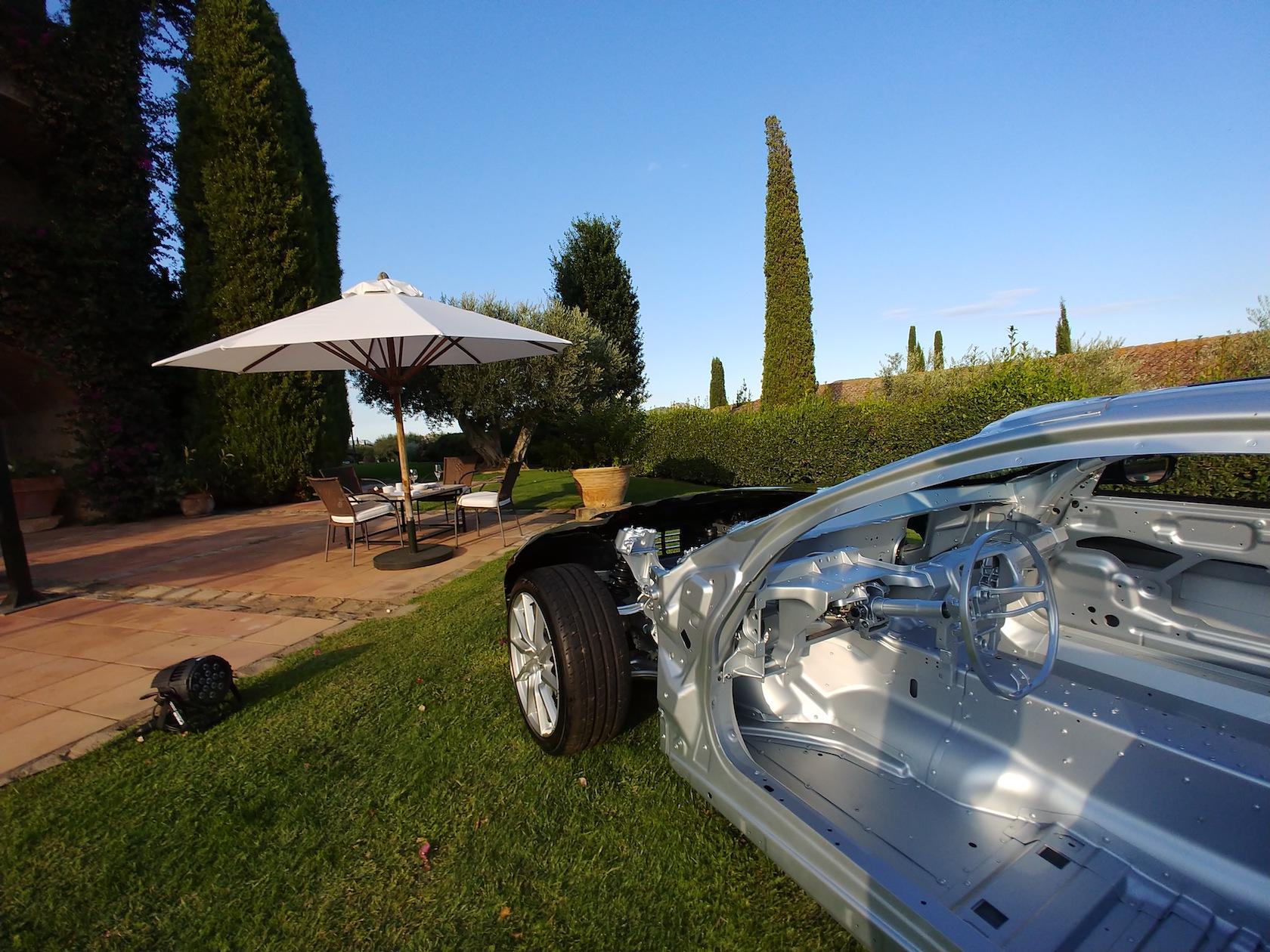 If the DB11 ever felt unstable I’ll admit it was mainly down to driver error; even so, such moments were few and far between. For the most part, you’re treated with a super car that feels planted, nimble, and damn ferocious when required. In GT or “comfort” mode, meanwhile, there’s no shortage of luxury in the manner of classic grand tourers, setting the benchmark high for other automakers.

That includes refinements to the cabin. For the most part everything remains relatively the same as in the V12, though Aston Martin’s designers have cooked up a more “harmonized” set of materials and layout, Palmer says. Apparently, per the boss himself, there was some feedback from owners about a lack of harmony in the interior. Rather than add that to the to-do list for the next range refresh, he and the team opted to listen to customers and critics, and make the changes sooner rather than later. 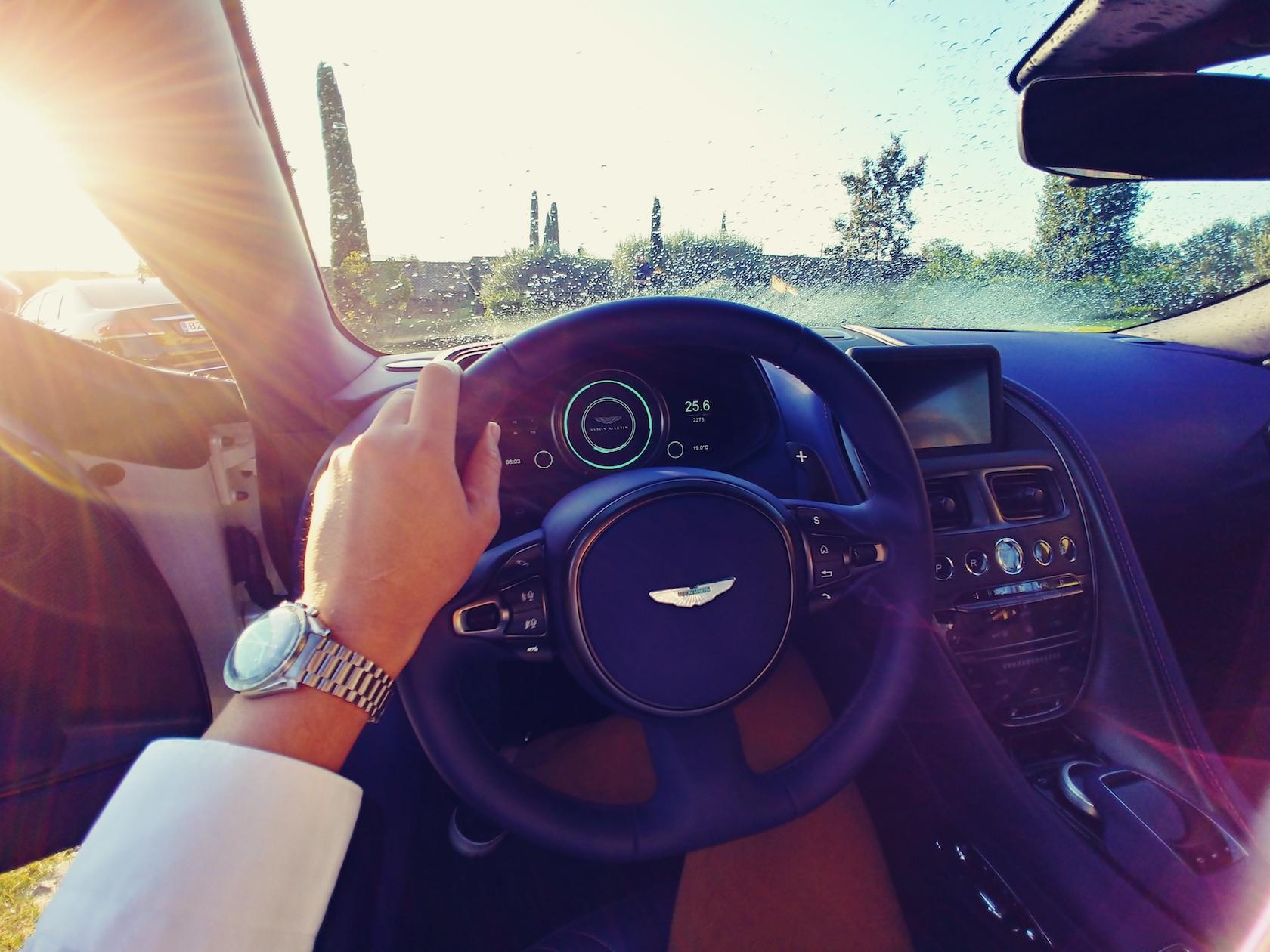 As problems go, if you’re in the market for a gorgeous two-door, four-seater GT, picking between the V12 or V8 powered DB11’s is a pretty nice concern to have. Luckily there’s really no “wrong” choice either way. Personally, the V8’s prowess as a driver’s car, one that is perfectly suited to most driving conditions, singles the newer model out for me. Opting for the V8 also leaves you with a reasonable chunk of change left over for the other adventures in your life. Pricing starts out at $198,995 for the V8 DB11, while the V12 will set you back $216,495.