Porsche is putting all luxury sedan automakers on notice: beware the one-two punch of the 2017 Panamera 4S and Panamera Turbo. Completely redesigned, in the four-door’s first major overhaul since its debut in 2009, which one you decide upon depends heavily on both your pocketbook and your appetite for raw performance.

SlashGear’s a heavy tech site so you know I’m all over both the amazing technology inside the cabin as well as Porsche’s improvements to the new V8 and V6 engines powering the Turbo and 4S respectively. Handling and performance so strong, you’d be forgiven for forgetting you’re driving a four-door sedan, yet with an interior that ticks both comfort and safety boxes. For the full run-down on the tech, check out SlashGear’s full 2017 Panamera deep-dive here; today, I want to focus on what the new car is like to drive.

Both models come with the new twin-turbo “in the V” engine, and all-wheel drive is standard. The V8 twin-turbo, 4-liter engine has 550 HP and 568 lb.-ft. of torque, and while no one ever buys a car for its 0-60 mph time alone, it’s still impressive to mention that it’s just 3.6 seconds. That’s a damn fast car by any standards. Driving it requires little in the way of compromise, including when it comes to fuel consumption which is reduced by up to 30 percent thanks to cylinder deactivation technology. A first for Porsche, simply put the V8 switches over to four cylinders at cruising speeds or when the engine load is low. 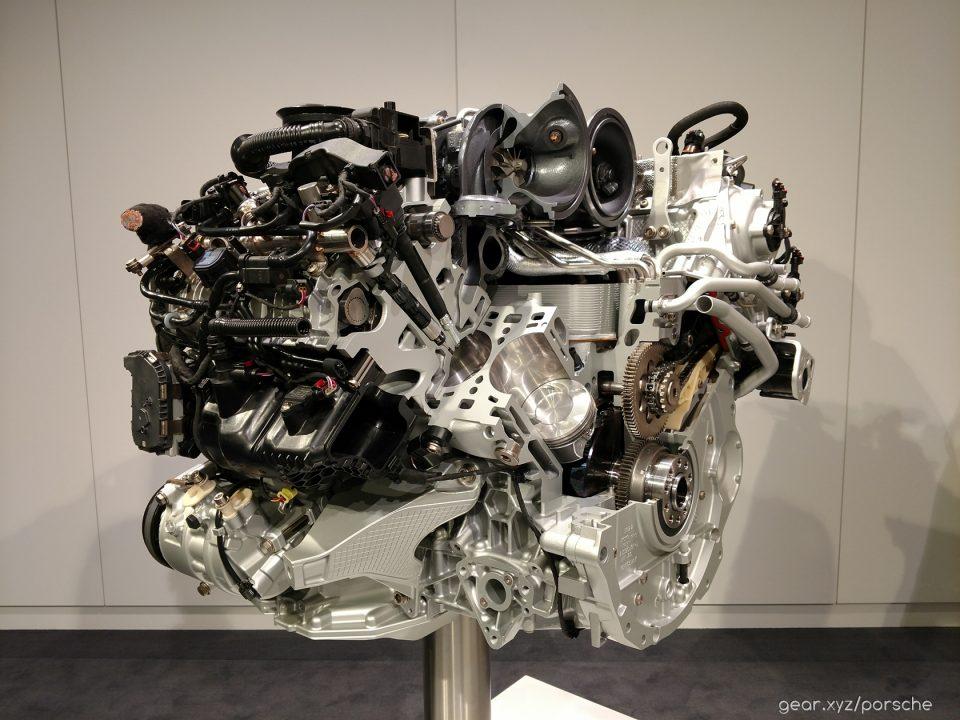 After driving the V8 and then the V6 back to back, while you might not immediately notice the extra power in the former in city driving scenarios or during mountain twists and turns, it does show its worth on the autobahn at unrestricted speeds. Torque delivery on the 4-liter is near instantaneous, not to mention to 110 horsepower difference between it and the Audi-designed 2.9-liter V6 with its 406 lb.-ft. of torque. There’s little to zero turbo lag on either engine, though the V6 gets variable intake valve timing rather than cylinder deactivation. 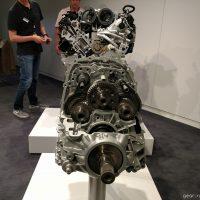 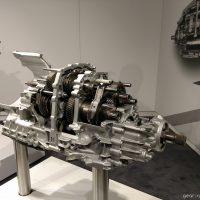 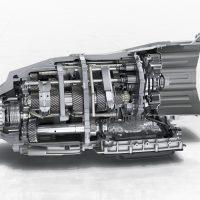 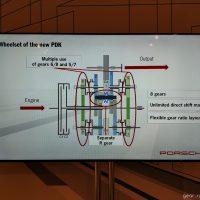 The Audi-based V6 twin-turbo is arguably the best in the market, especially when mated with Porsche’s new, slick-shifting 8-speed PDK transmission. Porsche changed out the intake system and exhaust, and unfortunately compared to the V8 won’t blow your ears away. Still, it’s a small price to pay for the big chunk of change you’ll be saving, though. Meanwhile, though the V8’s lovely exhaust note has obvious appeal, many will welcome – myself included – how well normal drive mode is for everyday driving, keeping interior noise to a minimum. 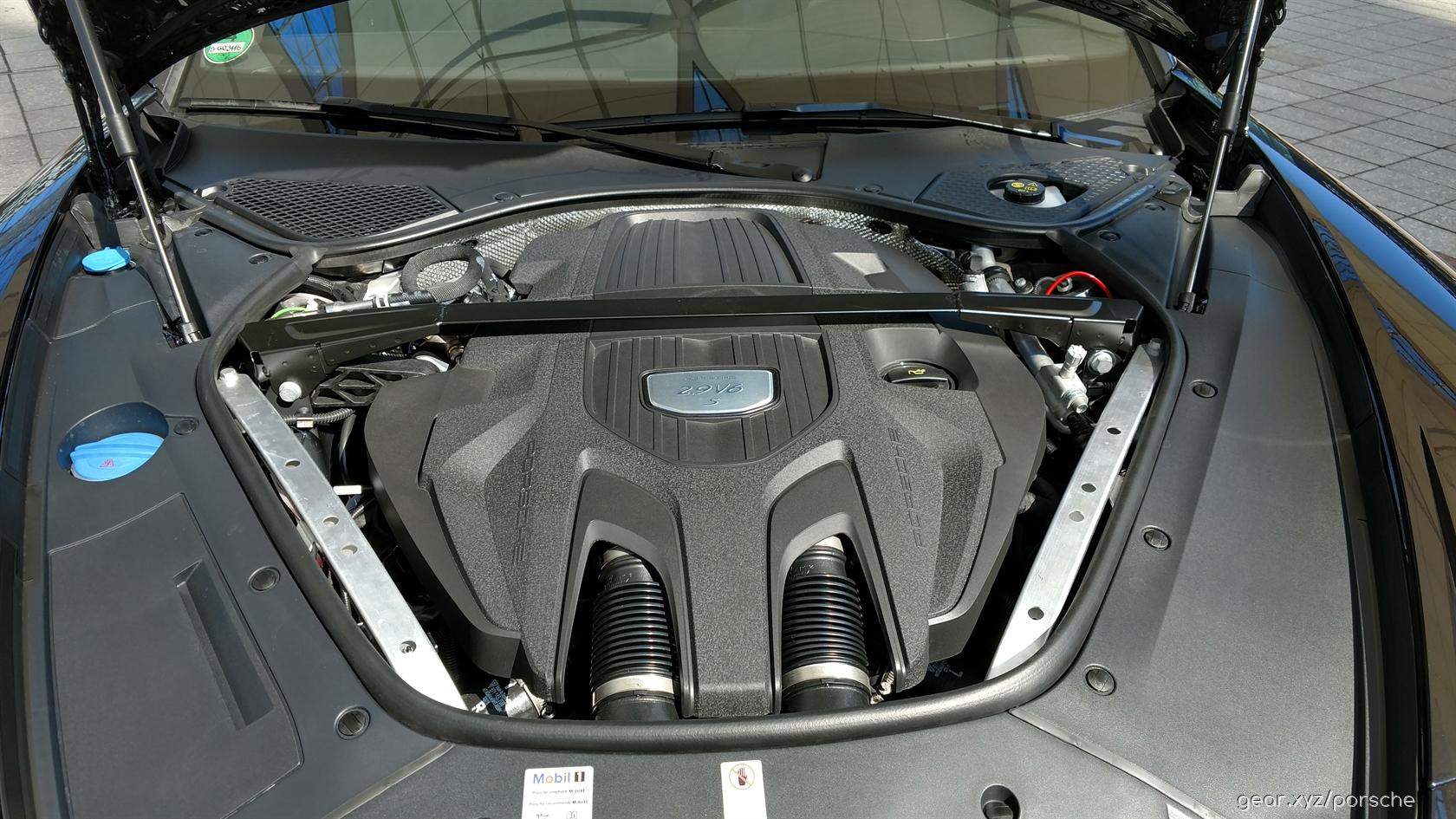 In order to maintain the same weight as the previous-gen car, Porsche used much more aluminum in the body structure while switching the entire roof and side panels to lightweight material. That demanded new production techniques for bonding and blending together the different materials without using any sort of welding. As a result, the Panamera still sits right at 1,870 kg (4,223 pounds) for the 4S and 1995 kg (4,398 pounds) for the Turbo. 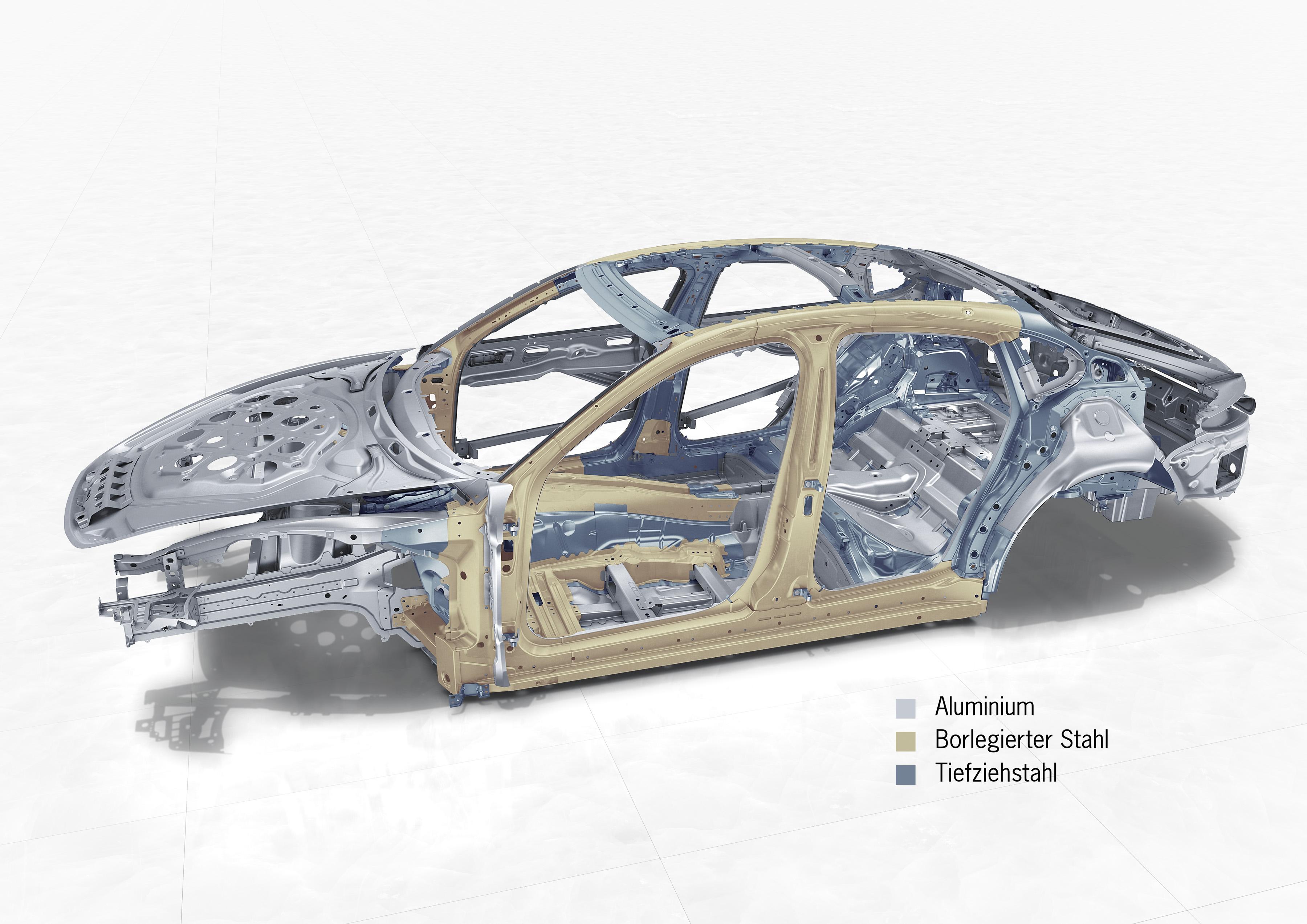 The combination of tech and sheer power should yield a thrilling ride, right? Absolutely and then some. On day one, I drove the pants off of a fully-equipped Panamera Turbo, and spent a lot of time on Porsche’s InnoDrive in particular. Think adaptive cruise control on steroids. I’ve tested similar systems on the Audi Q7 and A4 and they’re both great, but Porsche’s implementation of InnoDrive raises the driver-assist bar a couple of notches.

Traditional adaptive cruise control monitors traffic speed ahead to determine the vehicle’s pace, slowing as it slows, and speeding up – to your preset maximum – when it gets faster. InnoDrive significantly increases the number of things taken into account, including high-res navigation data, radar, and video sensors to determine speed limits, the road gradient, and corner radii along the route up to roughly 1.8 miles ahead. 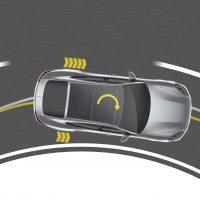 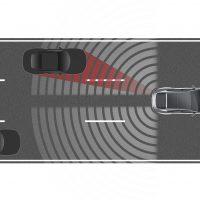 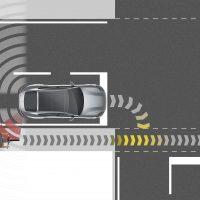 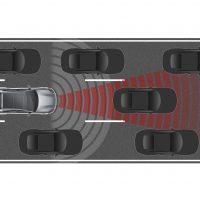 Depending on the drive mode, both gearshift strategy and speed are calculated by the system. Take for instance my experience transitioning to an open, unrestricted stretch of autobahn. I had switched to Sport+ and turned on InnoDrive, and was hovering around 120 kph (75 mph): right after the road switched to unrestricted, the Panamera Turbo roared to life and sped up like a cheetah on a mission to catch its next meal. It didn’t stop until we bumped – metaphorically – into a vehicle in front, at which point it automatically slowed down.

Had I been in Normal drive mode, the car would not have accelerated so aggressively, instead in a far more docile fashion that’s more comfortable when hauling family around. 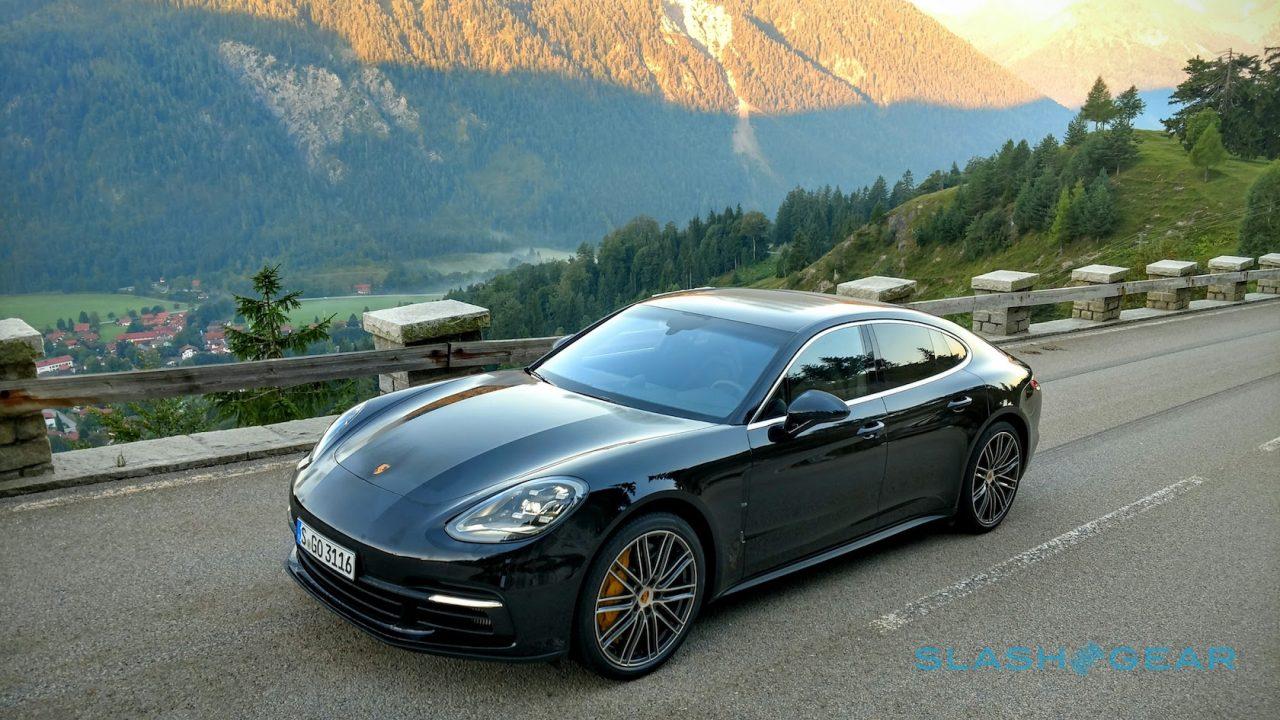 Another mind-blowing feature to, while approaching an exit, turning on traffic Jam Assist while InnoDrive is active. It’s the closest thing Porsche offers to autonomous driving on the road: the Panamera slows down to the marked speed limit, and then relies on the lane markings to take the exit ramp all by itself.

It’s capped at under 60 kph or 40 mph but, during my test, I felt as if I was driving considerably faster. To be honest, in the real world and with my family on board, it would take some getting used to the idea of taking my hands off the steering wheel: the car can handle the brake and gas pedals all it wants, but for the moment, steering will be all me. 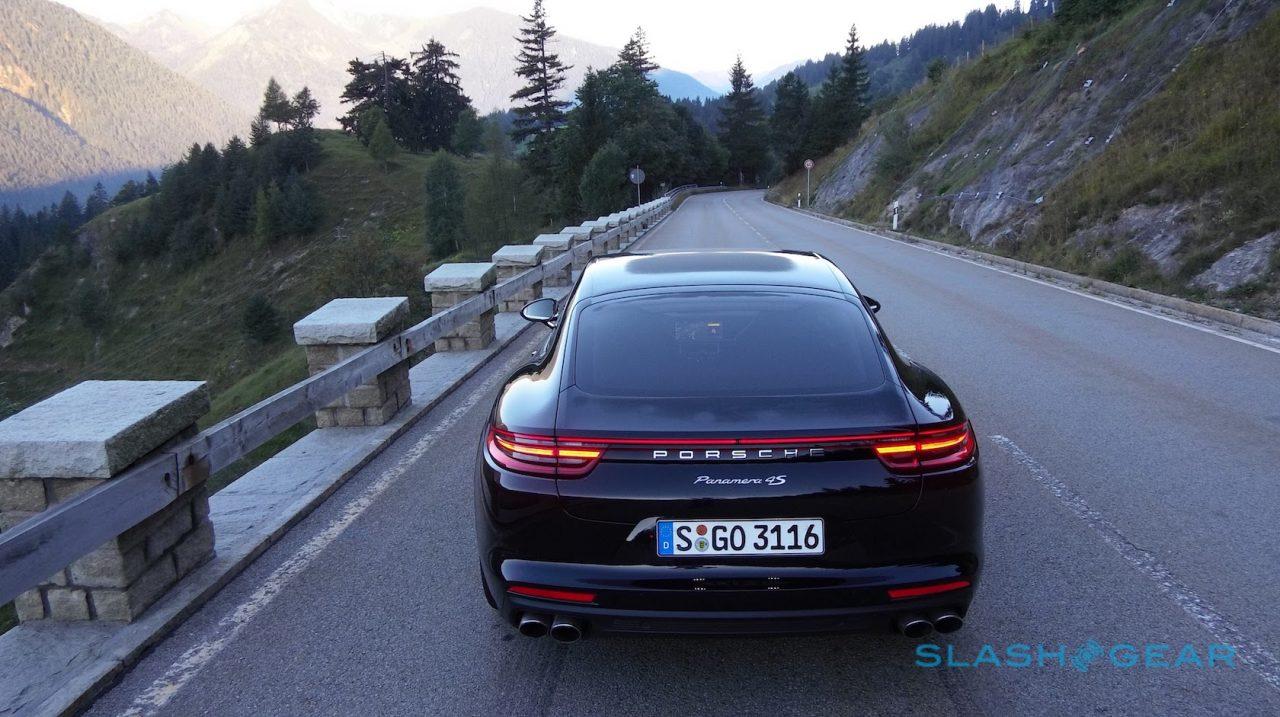 If I have my doubts there, I’ve no complaints at all about 4D Chassis Control. Porsche has stressed just how tightly integrated all the chassis systems are in the 2017 Panamera, and one big improvement you’ll notice right away is the new three-chamber air suspension system. Switching between Normal, Sport and Sport Plus instantly changes the firmness, from all three chambers down to only one in the most aggressive mode.

At higher speeds, the air suspension automatically tightens up the damping and spring rates, with the anti-roll system keeping the sedan flat and level. At autobahn pace the impact of any bumps on the road can be considerable, but the air springs simply gulp ’em up. 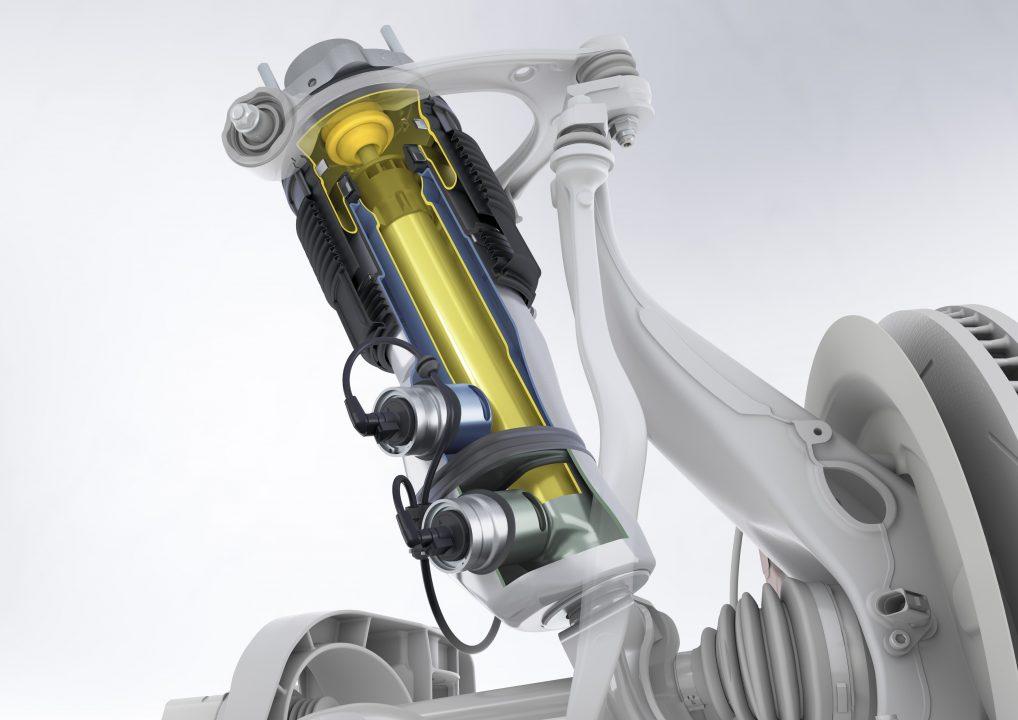 You don’t need to permanently switch drive mode for just a jolt of power, mind. Like the 911 and 718, the Panamea gets a Sport Response Button, which when pressed gives you 20 seconds of every setting tuned to its most aggressive level. For obvious reasons, it’s much more fun in the Turbo than the 4s. Porsche bills it as being intended to help you quickly pass a slower moving vehicle, but if you’re like me you’ll hit it just for kicks.

Inside, think of the outgoing Panamera as the old-school yet sleek Motorola StarTAC phones of yesteryear. The new Panamera UI is modern, intuitive, and classy, and though I’m sure there will be strong opinions on the absence of physical buttons, personally I’m on the “love it” side of the fence. The center console is clean. The area around the shifter is clutter-free with and has an air of modern elegance. The Panamera is, after all, a luxury sport sedan first and foremost – not a sports car. In order to stay competitive and take on the likes of Audi’s upcoming A8 and Mercedes heavily refined C- and E-Class sedans, the upgrade is an absolute must. 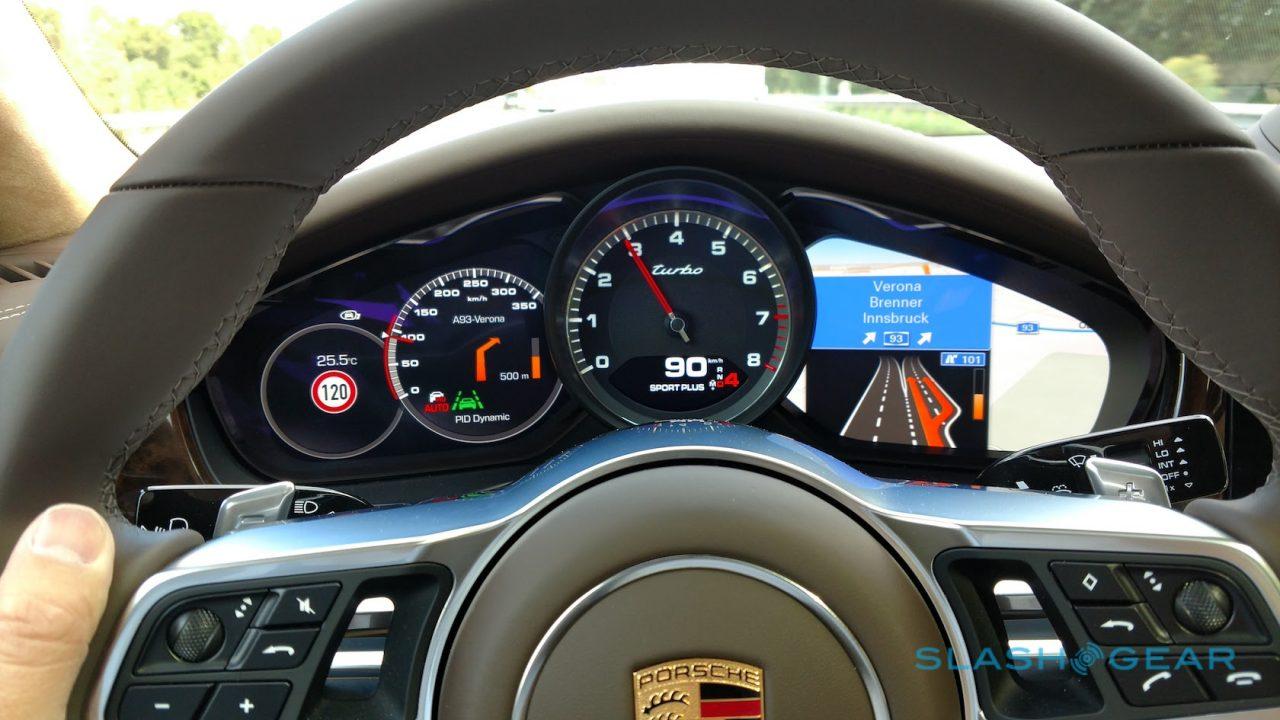 My only regret regarding the large main display is Porsche’s conscious decision to omit localized haptic touch, something which will be prominently featured in the upcoming new Audi A8. I can’t imagine why Porsche would do this, since the touch0sensitive buttons around the gear shifter do, in fact, respond with a button-like haptic response when firmly pressed. If you’ve used the new iPhone 7’s home button, that’s what this localized haptic sensation feels like. 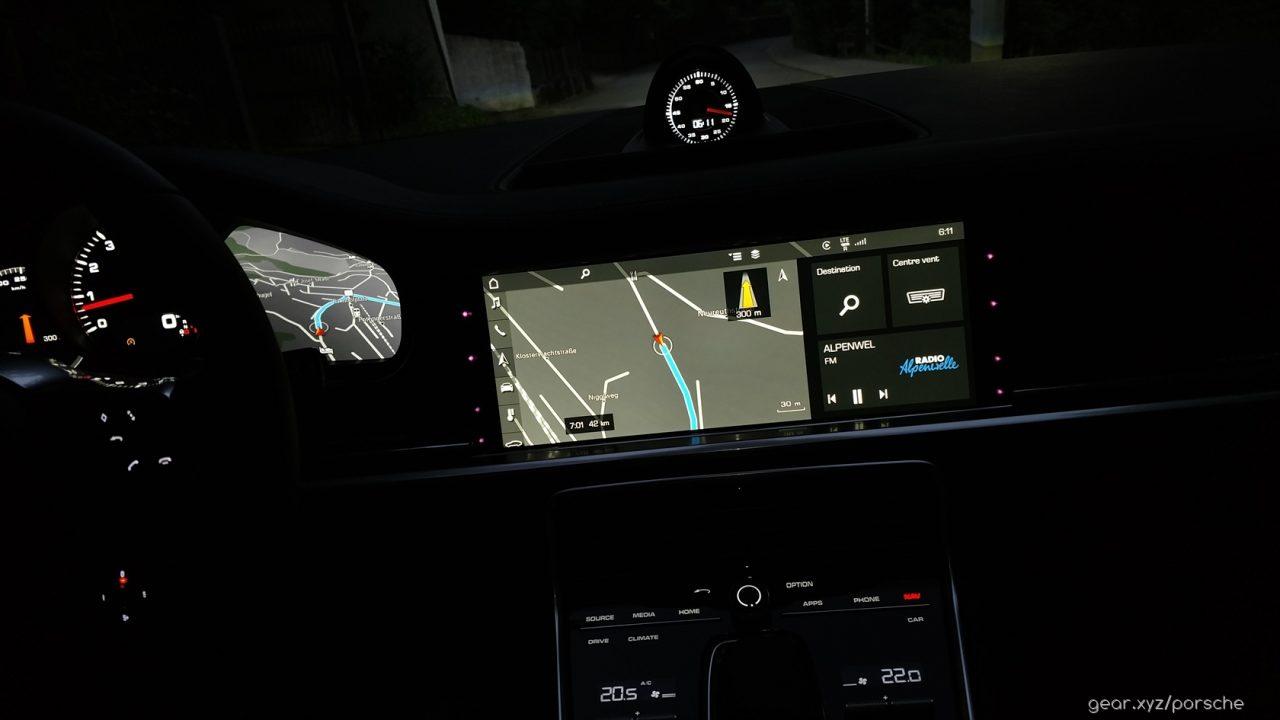 Many of the physical buttons are now replaced by menu options on the 12.3-inch touch display, which uses proximity sensors to wake when your hand approaches. It’s a comprehensive system, though during my time behind the wheel I didn’t have any problems switching between and setting the climate control, radio, deploying the active spoiler, or even setting the navigation. While others may complain that buttons or menu options blend in too much, that’s certainly possible for some, but even after just an hour driving the car, I can’t imagine owners not acclimating to the sliding row of menu icons docked to the left of the screen, while the options drop down from the top. Helping with that is the fact that swiping back and forth, touch, and pinch zoom are as equally fluid as on your iPhone. 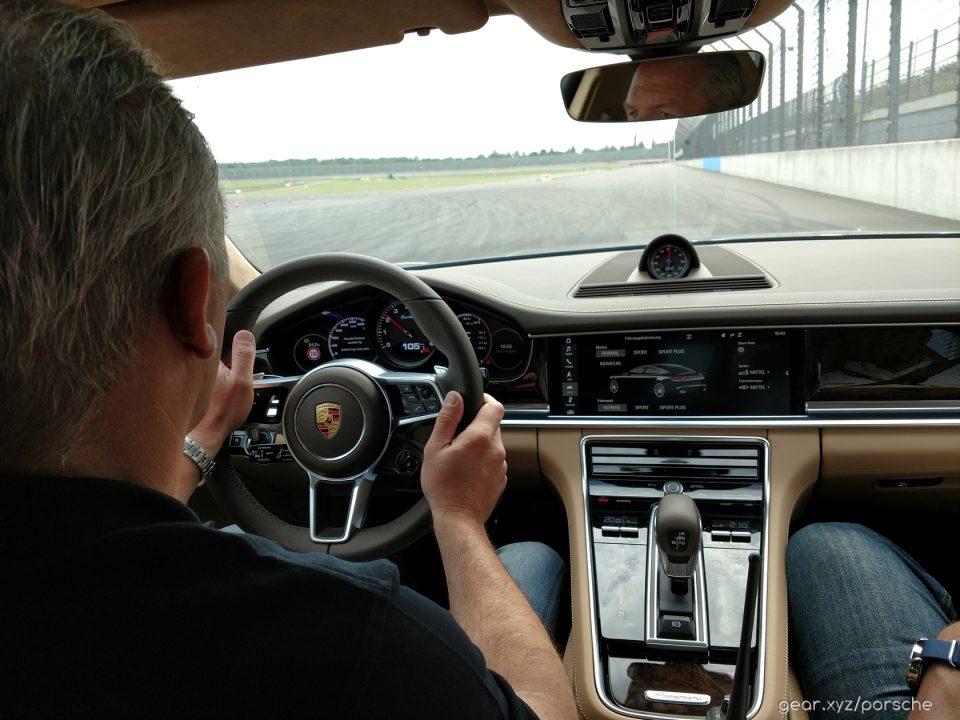 In all, I’m incredibly impressed by how minimal yet thorough the menu options and layout are, and how functional the split 3/4 and 1/3 split-screen views are. It’s one of the best systems I’ve tested in the market to-date; be sure to check out my walkthrough video of the beautifully rendered user interface below.

Normally, I prefer driving versus being driven, but I did spend some time in the rear passenger side seat of a sport-based version of the Panamera 4S. The rear seat angle is fixed as standard, with just enough pitch for a comfortable yet secure position. The bolsters are noticeably more significant than in other cars, with plenty of lateral support. There’s little body roll, even when my driver was being enthusiastically spirited through the mountains. 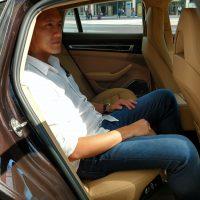 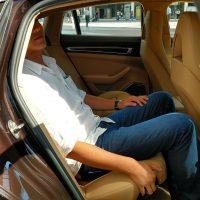 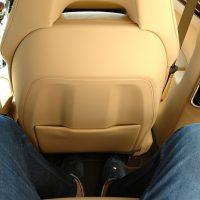 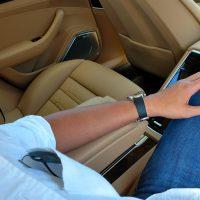 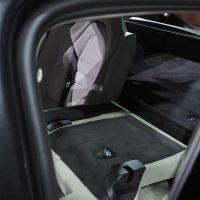 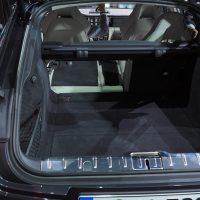 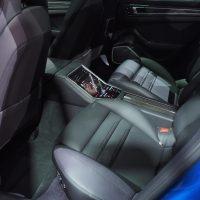 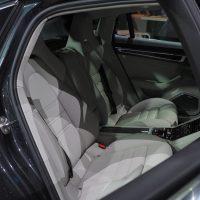 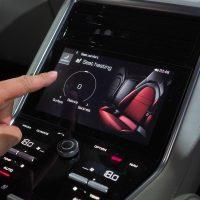 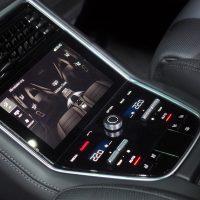 While the new Panamera may look smaller and sleeker, it’s actually slightly larger all around. The overall length has been stretched 1.2 inches to 116 inches, for instance, which pays dividends in interior space. If you plan on being driven around, I’d strongly suggest ticking the optional 8-way power seats, available for both the Turbo and 4S. The adjustable pitch starts at the angle as the fixed sport seats, but can be pushed back for extra comfort, though don’t confuse it with the lounge seating you might find in an S-Class; think more along the lines of the adjust you get reclining an airplane seat.

Porsche’s heavy use of touchscreens also extends to the rear. The 7-inch center display is used for climate control as well as adjusting vents, navigation, and radio. Heated seats are standard up front on all models, while the rear seats on the Turbo get heating too, something that’s optional for all other models. 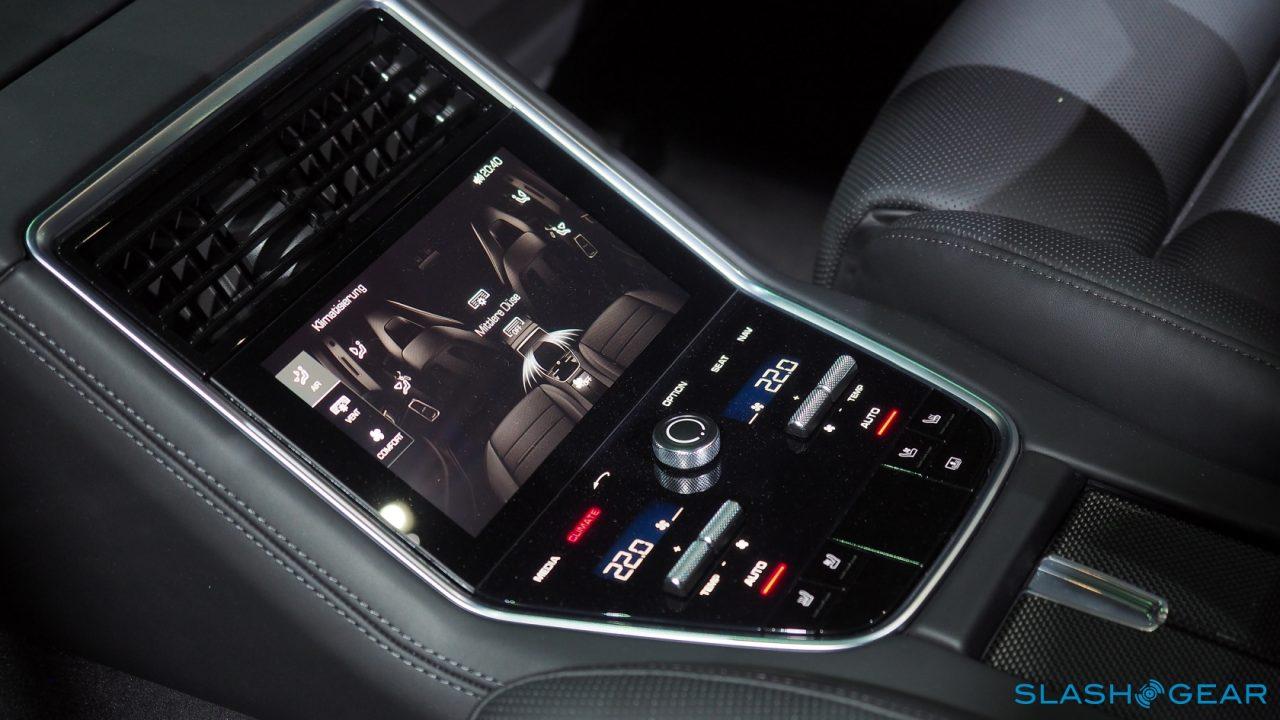 Were I were to build a Panamera myself, I’d start with the 4S and tick the Sport package at $6,930 (it’s $5,580 for the Turbo, since Adaptive Air Suspension is already standard on the Turbo). That adds rear wheel steering, which effectively lengthens or shortens the wheelbase depending on whether you’re squeezing into a tight parking spot or traveling at higher speeds, and it’s well worth the additional cost. 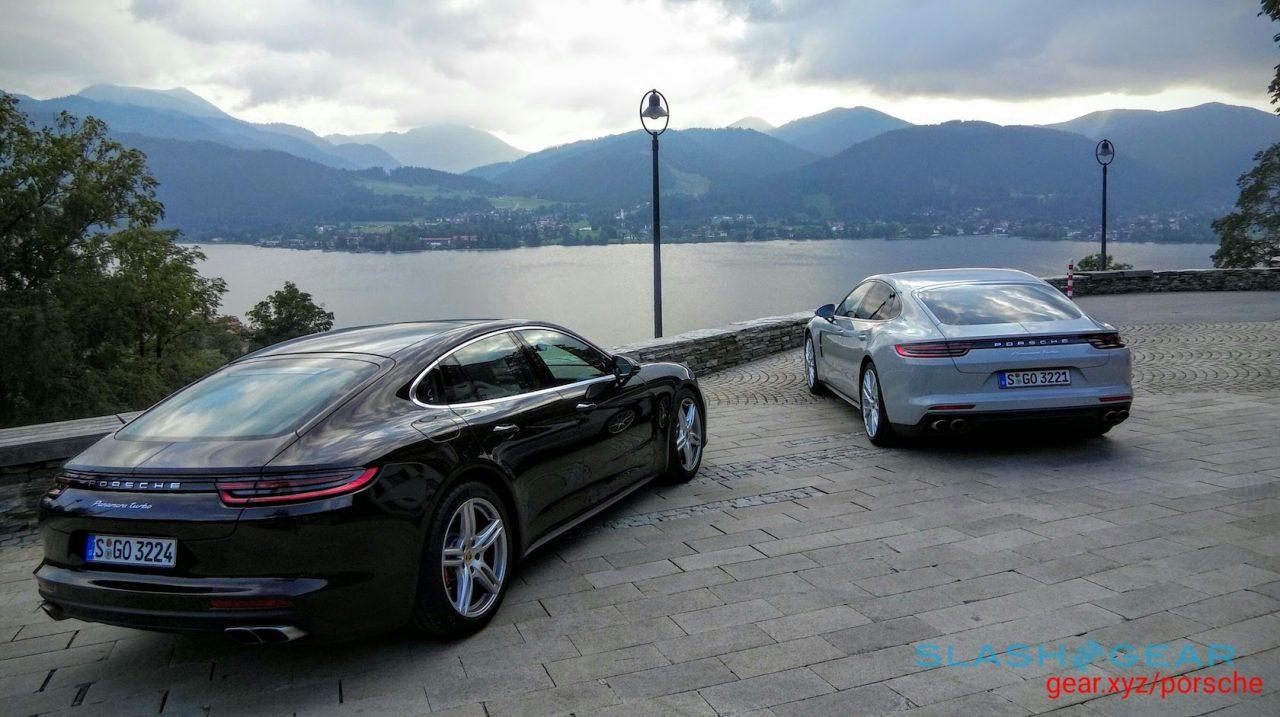 I’d say the Adaptive Air Suspension is an absolute must, too, and last but not least you get launch control. Who doesn’t love launch control, right? It comes with the Sport Chrono Package, which also includes the physical drive mode selector at the 4’oclock position on the steering wheel; in the center is the useful (and entertaining) Sport Response Button. 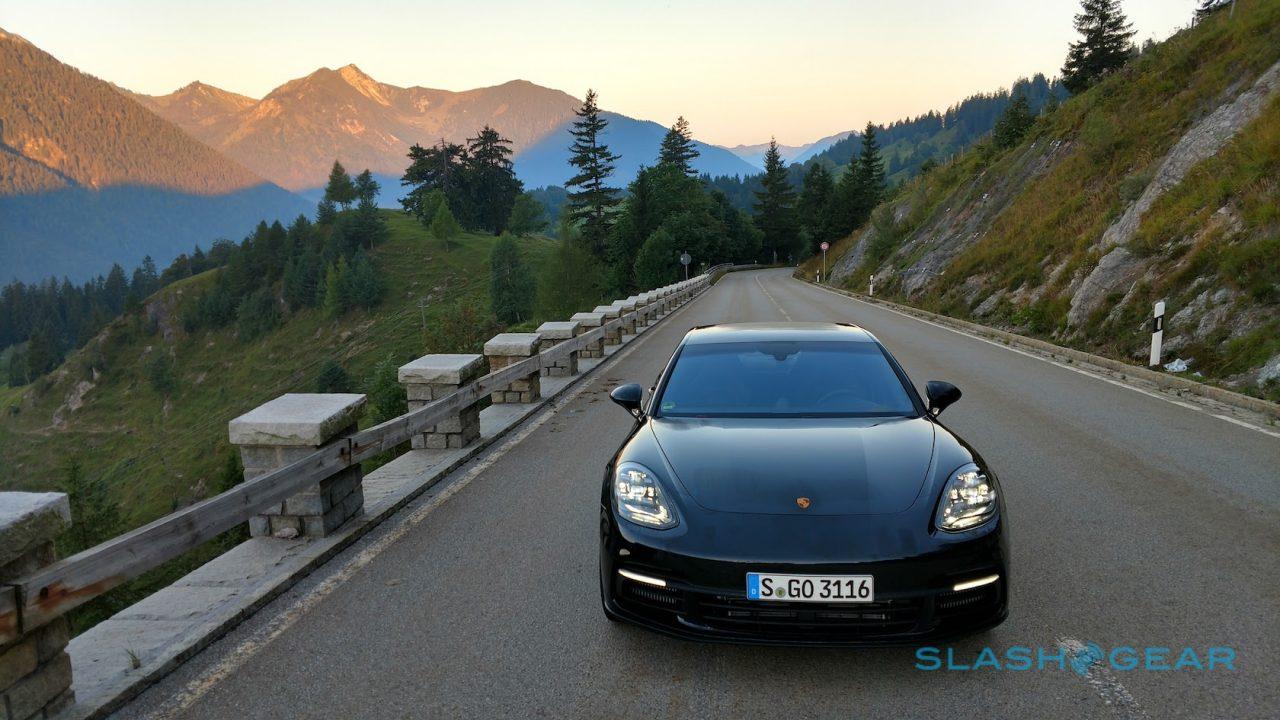 Critics weren’t shy in voicing their doubts that Porsche could deliver the comfort and refinement luxury sedan buyers expect with the spirit of the automaker’s performance cars when the first Panamera launched, but those questions were quickly put to rest. The strong sales performance of the four-door since 2009 is proof enough that Porsche struck a nerve among owners who either have a 911 or similar in the garage already but needed more practicality, or who simply couldn’t sacrifice the space for four adults.

Into this mixture, the 2017 Panamera injects technology both innovative and usable. The car keeps its aggressive potency, but wraps the experience in a more intuitive, flexible interface, while features like InnoDrive and the Adaptive Air Suspension make a real difference in how you live with the Panamera every day. An already impressive car gets even more impressive.