If the 2017 Mazda MX-5 Miata RF aims to introduce some hard-top practicality to the iconic little roadster, does it run the risk of losing what makes a Miata, well, a Miata? That should’ve been the question we asked when the Japanese company unveiled the RF at the New York Auto Show a year ago: instead, we were too busy being wowed by its innovative retractable roof and achingly pretty design. Fast forward to today, with the first of the MX-5 RF Launch Edition cars reaching the initial 1,000 buyers and the regular versions landing in Mazda dealerships, it’s time to get behind the wheel and ask the tough questions.

Grafting a new roof onto an existing design can be a recipe for disaster. The third-generation MX-5 hard-top was practical, but had a weird humped shoulder with the roof down, and looked a little ungainly in profile compared to the simplicity of its soft-top sibling. Faced with the same challenge over again, Mazda has not only opted to embrace the possibilities, but ended up with – to my eyes, at least – a better looking car at the end of it. 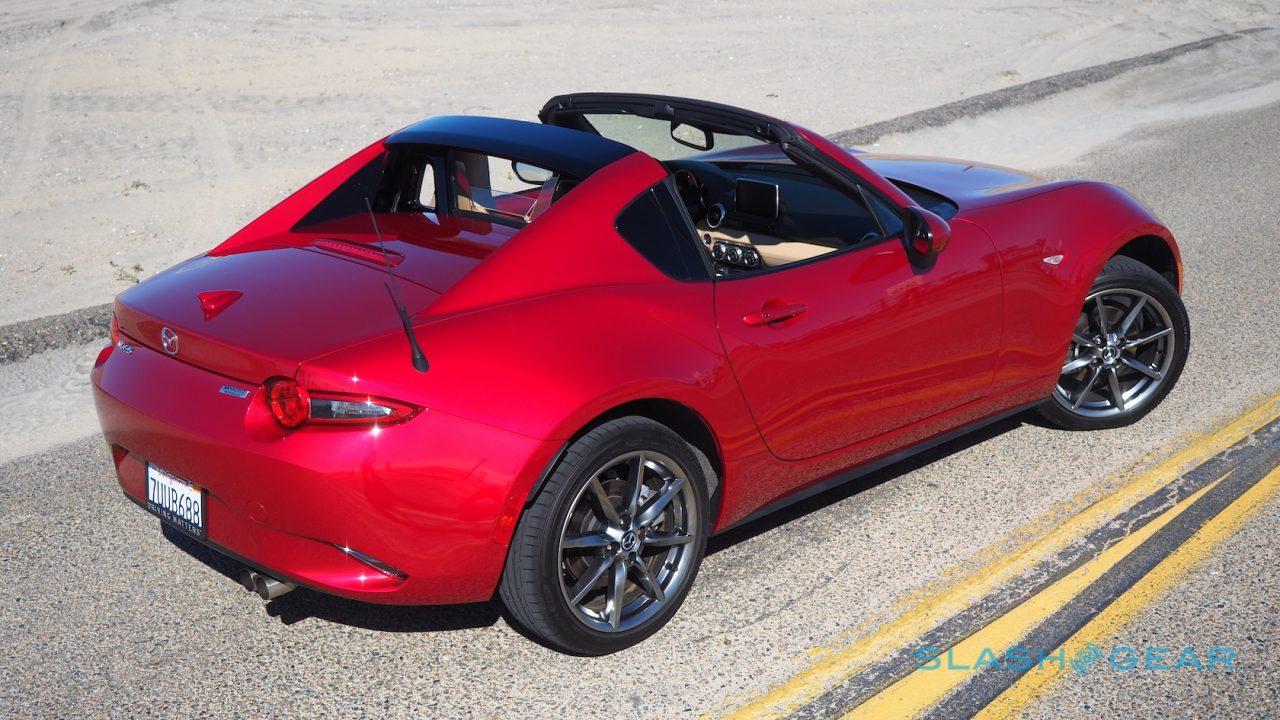 “RF” stands for “Retractable Fastback”, and with its pair of flying buttresses behind the headrests it basically makes the MX-5 RF a targa. Mazda’s designers claim their inspiration was classic Italian cars of the 50s and 60s, and you can certainly see that in the sheet metal. There’s also a little F-TYPE coupe in the rear profile; no bad thing, given Jaguar’s car is renowned for its good looks (not to mention a sticker price at least twice that of the Miata).

The roof itself is something of a logistical marvel. It opens or closes in just 13 seconds, the fastback section lifting as the roof and glass rear window pull back, pivot, and gracefully sink into the space behind the rear seats. You can operate it while driving, too, though only at up to 6 mph. Mazda tells me that’s because any faster and those with long, flowing hair might find it caught up in the mechanism.

Astonishingly, the impact of a practical hard-top on the free-spirited Miata is very low. Its aluminum construction means the weight difference between the two versions is just over 100 pounds; Mazda has managed to keep the roughly 50/50 weight balance despite the extra heft, too. Even with all the extra hardware, trunk space is the same as in the soft-top.

The fastback style does change the overall experience, though, whether or not the roof is down. Obviously with the whole thing closed, the MX-5 RF feels like a coupe: road and engine noise are significantly reduced, particularly when at speed on the highway. Even opened up, though, the cabin is quieter than in the regular Miata, and there’s less wind buffeting. 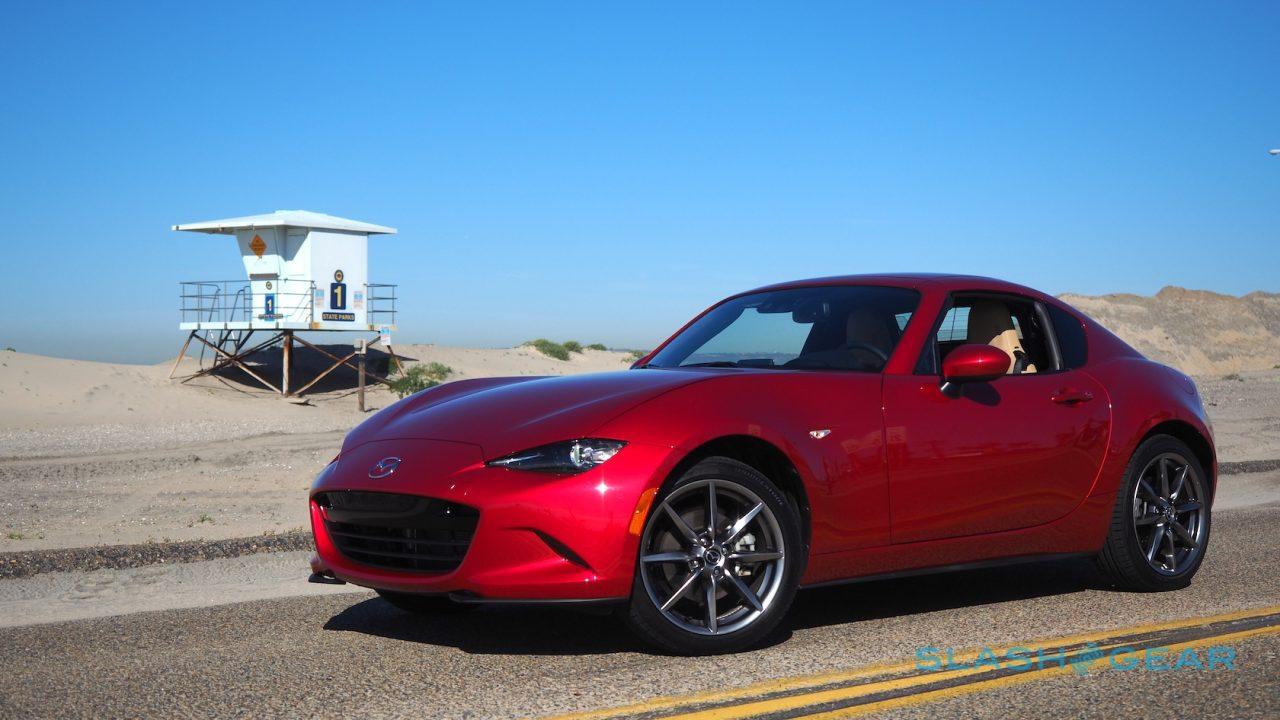 If you’re a true wind-in-your-hair devotee then that new degree of isolation might be a step in the wrong direction, though I suspect many will prefer it overall. Finding ourselves unexpectedly on a freeway – and going too fast to close the roof – we were surprised to discover that we could still hold a conversation and hear the radio. I suspect longer trips might be more relaxing in the MX-5 RF, simply for this fact alone.

That’s not to say the essential Miata spirit has been lost. Both versions share the same 2.0-liter SKYACTIV-G engine, with 155 horsepower at 6,000 rpm and 148 lb-ft. of torque at 4,600 rpm. There’s a 6-speed automatic for those who never learned how to drive stick, but the 6-speed manual transmission is reason enough to learn. Mazda’s gearbox is an absolute star, beautifully balanced and with just the right amount of heft to provoke enjoyment without arm ache. Throw in great clutch weighting and you’ve got the perfect example of why fun doesn’t require ridiculous levels of horsepower. 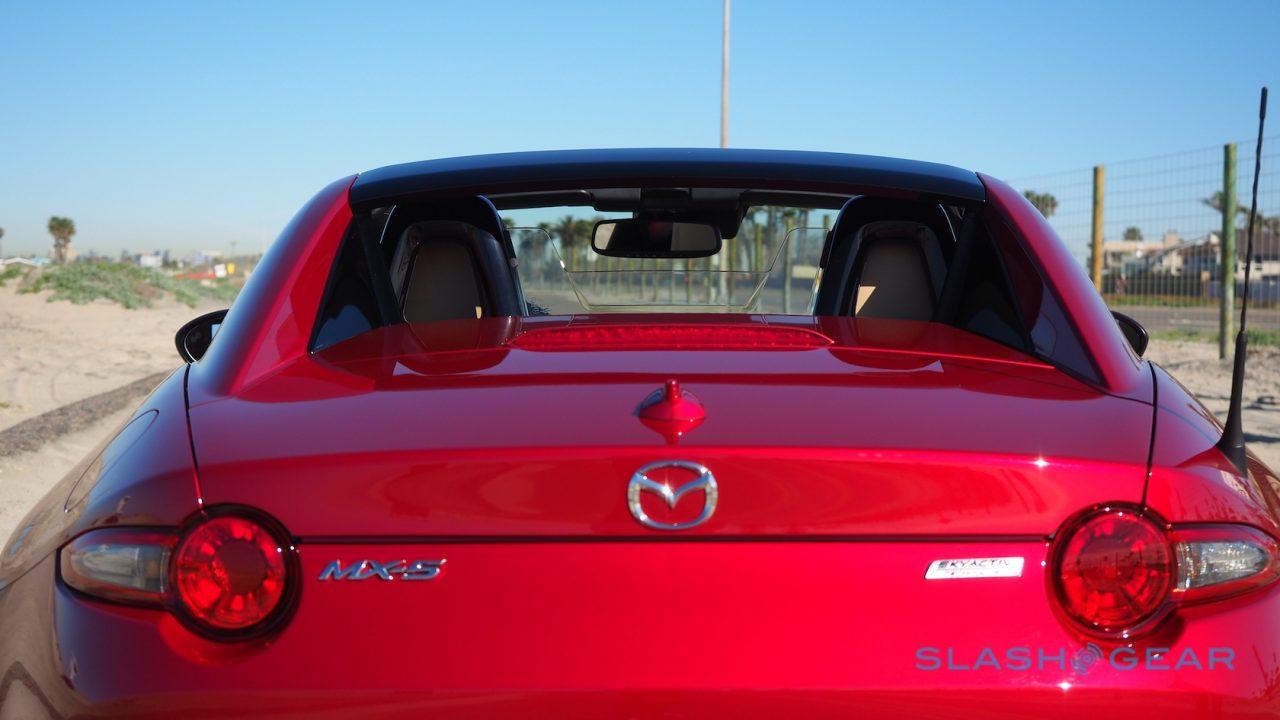 Hustle the MX-5 RF around some suitably twisty corners and whatever weight has been added is soon forgotten. The steering is slick and immediate, Mazda having tweaked the electric assistance in the RF, while the naturally-aspirated engine thrums eagerly up through the revs. Mazda’s preference for a suspension setup that rolls predictably in corners may run counter to the “keep it flat” ethos many in the sports car space insist upon, but it does its job: you know from your butt upwards just what the Miata is doing, when it’s running low on grip, and when you’re just nailing it. At the other end, the brakes have also been finessed with booster tweaks that make them more linear.

Part of the Miata’s long-standing charm is that you can tell where Mazda saved its dimes in order to keep the overall price competitive. The MX-5 RF will only be offered in Club (from $31,555) and Grand Touring (from $32,620) trims – there’s no entry-level Sport like the soft-top – though even in top-spec, some of the plastics in the cabin feel a little creaky or flex a little too readily at the touch. The silver trim is fooling nobody with its pretense at being metal. 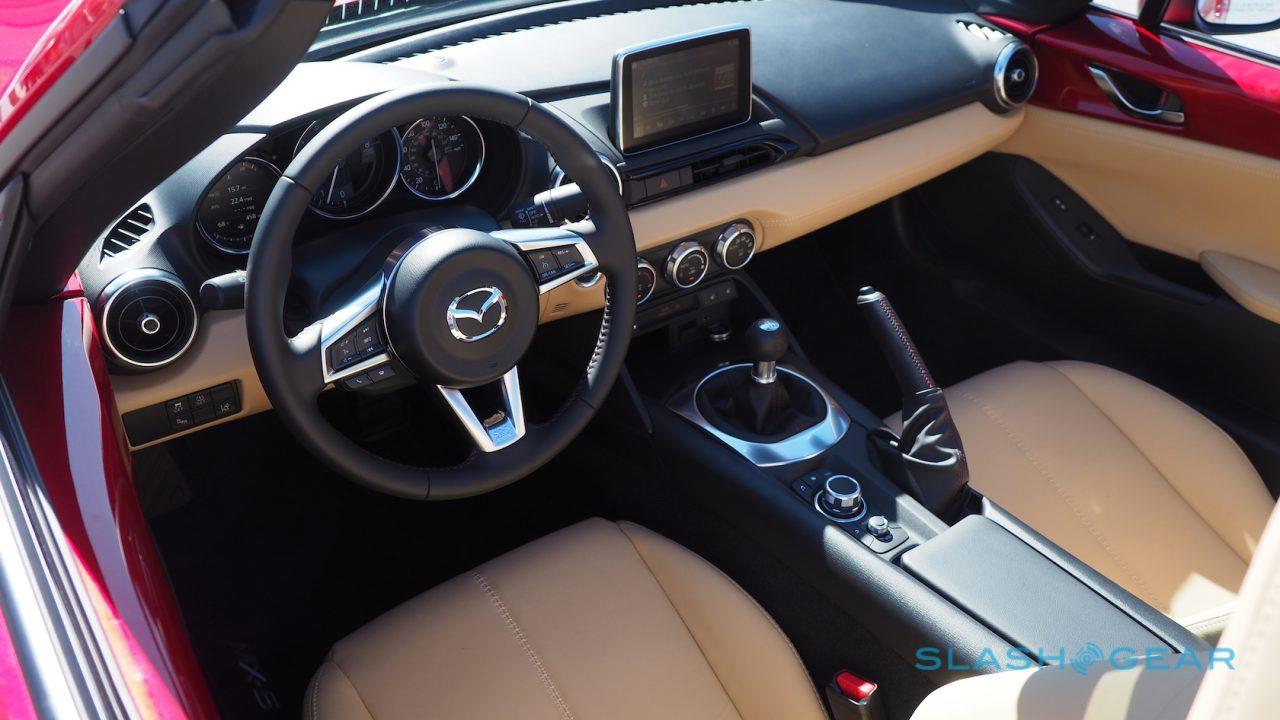 You don’t really care, though, since Mazda nails the essentials. The driving position is perfectly symmetrical – no offset pedals here, or indeed weird spacing that gets in the way of heel-and-toe transitions from gas to brake and back again – and the steering wheel nicely sized. All the key controls fall to hand readily, and there’s a new 4.6-inch color display in the driver’s binnacle which shows trip metrics along with roof status and more. Having pressed it the wrong way several times, I’d argue with Mazda’s decision that pushing up on the new roof switch opens it and pushing down closes it, but that’s a difference of opinion. Unfortunately you can’t operate the roof remotely, from the key.

Standard are rear cross-traffic alerts and blind-spot monitoring – the latter particularly useful, since the rear three-quarter “windows” are actually blacked-out panels to give the right visual balance – along with a Bose 9-speaker audio system with Bluetooth and USB support. Grand Touring trim replaces the standard cloth seats with heated leather, along with adding lane-departure warnings, auto high-beams, adaptive front lighting, and rain-sensing wipers. Android Auto and Apple CarPlay are glaring omissions, though Mazda tells me it’s not only working on both but plans to make them upgrade options for existing MX-5 RF owners. 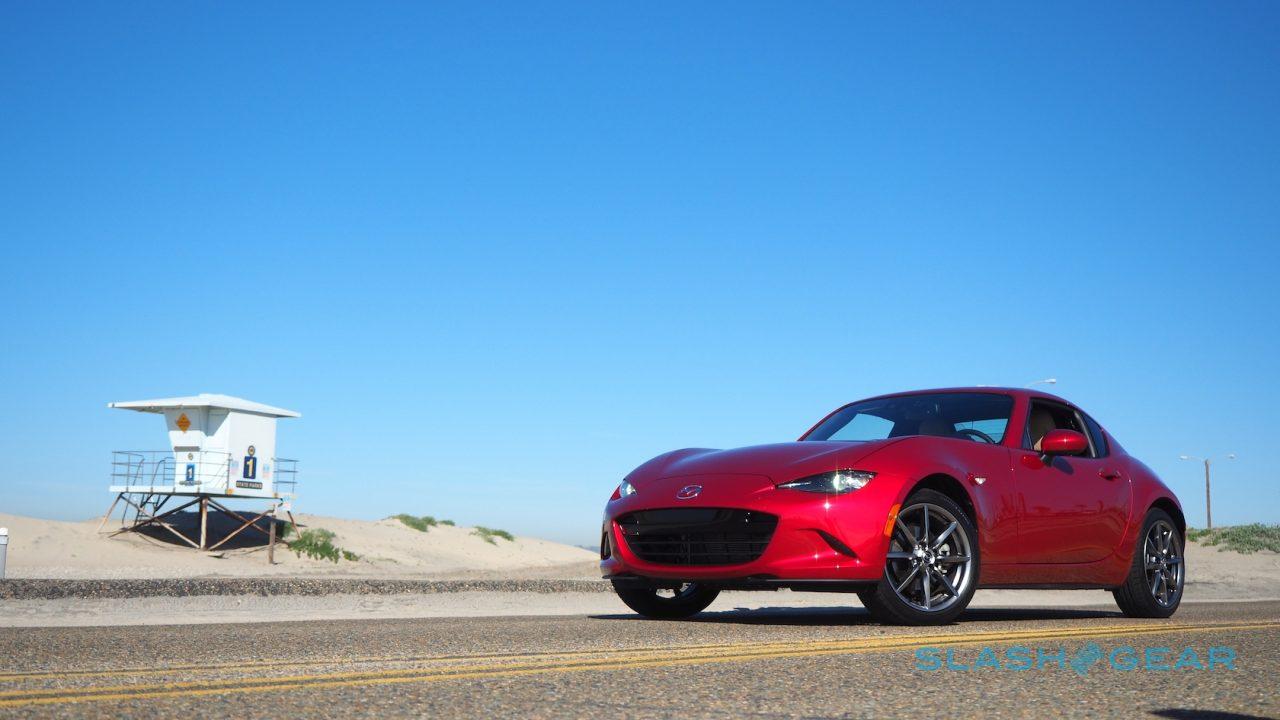 It’s fair to say Mazda has high hopes for the MX-5 RF. Thanks to greater appeal to drivers who would ordinarily never consider a soft-top convertible, and a higher take among female drivers – at least, going by trends for the third-generation hardtop – the expectation is that soon the fastback will account for around 60-percent of all new Miata sales. With a roughly $2,600 difference between the regular and RF cars, that’s a decent uptick for Mazda’s bottom line.

I find it hard to begin to begrudge them that, however. The 2017 MX-5 Miata RF has all the gleeful punch of the regular Miata, but asks fewer of its compromises. Adding the metal roof has only improved the car’s looks, and Mazda has wisely left well alone the driving dynamics that makes the car so addictive. If you ask me, that’s a tough question asked and conclusively answered.