Launching a hatchback in a country traditionally skeptical about the 5-door might seem an unenviable challenge, but Honda sees the 2017 Civic Hatchback as an opportunity to reframe the body-style as more about sport than boring practicality. Third in the 10th generation Civic line-up to reach the US, the new Civic Hatchback targets a small but growing subsection of compact car buyers: Honda says they’re image-oriented, usually male, and relying on their daily-drivers to keep up with an active, outdoor lifestyle. That makes it the perfect place to launch the new Sport and Sport Touring trims in the Civic range.

The Hatchback shares its platform with the Civic Sedan but, externally, everything from the B-pillar back is new sheet metal. That means the wheelbase and track are the same, but rear overhang has been trimmed by 4.3-inches. It pushes the rear wheels further out to the corners of the car, improving its stance from the rear-three-quarter view. 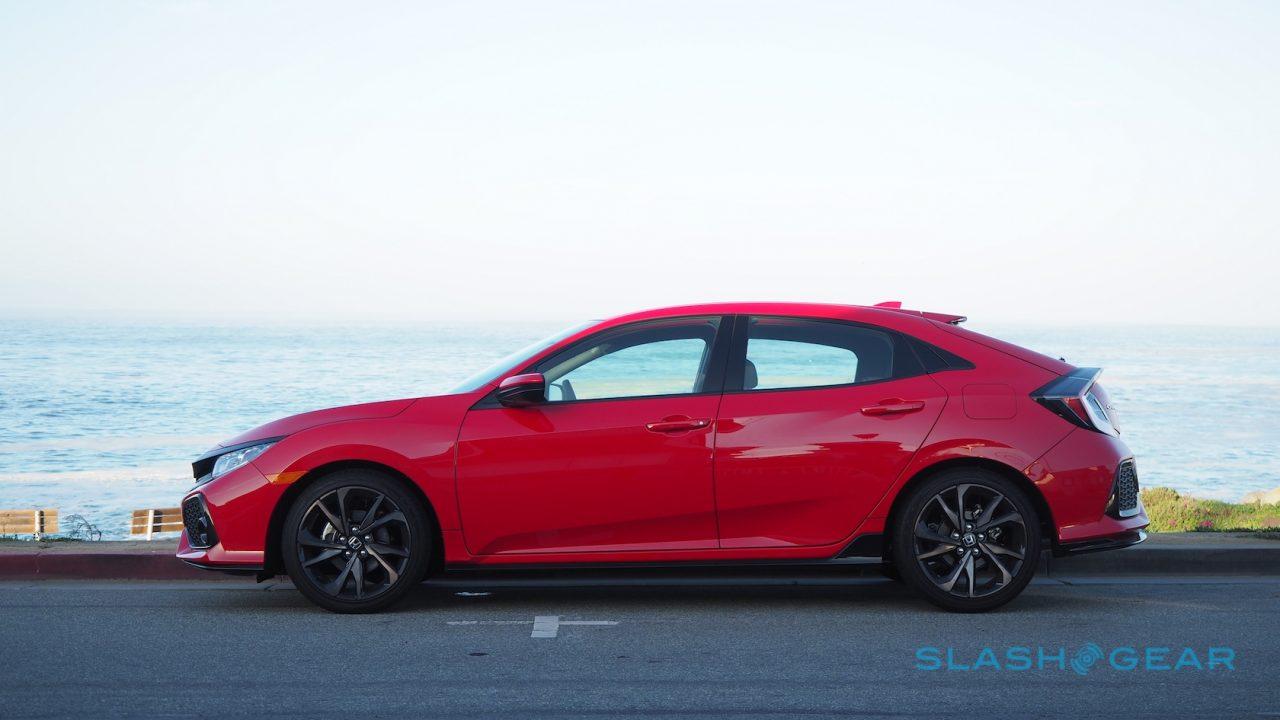 Sport models get bigger, 18-inch alloys and a new body kit. That includes piano black trim, dual-exhausts, and fog lights; the flagship Sport Touring throws in LED headlights with auto-highbeams too. How well the aero kit works visually is very dependent on paint color; the shiny black trim works better on some areas than others.

It’s fair to say that Honda is a little obsessed with the sporting ambitions of its third Civic body-style. According to design chief engineer Hideki Matsumoto, the goal in bringing the car to the US was to “express the high dynamic performance of European premium cars”, alongside the more family-oriented Civic Sedan and the front-seat-focused Civic Coupe. 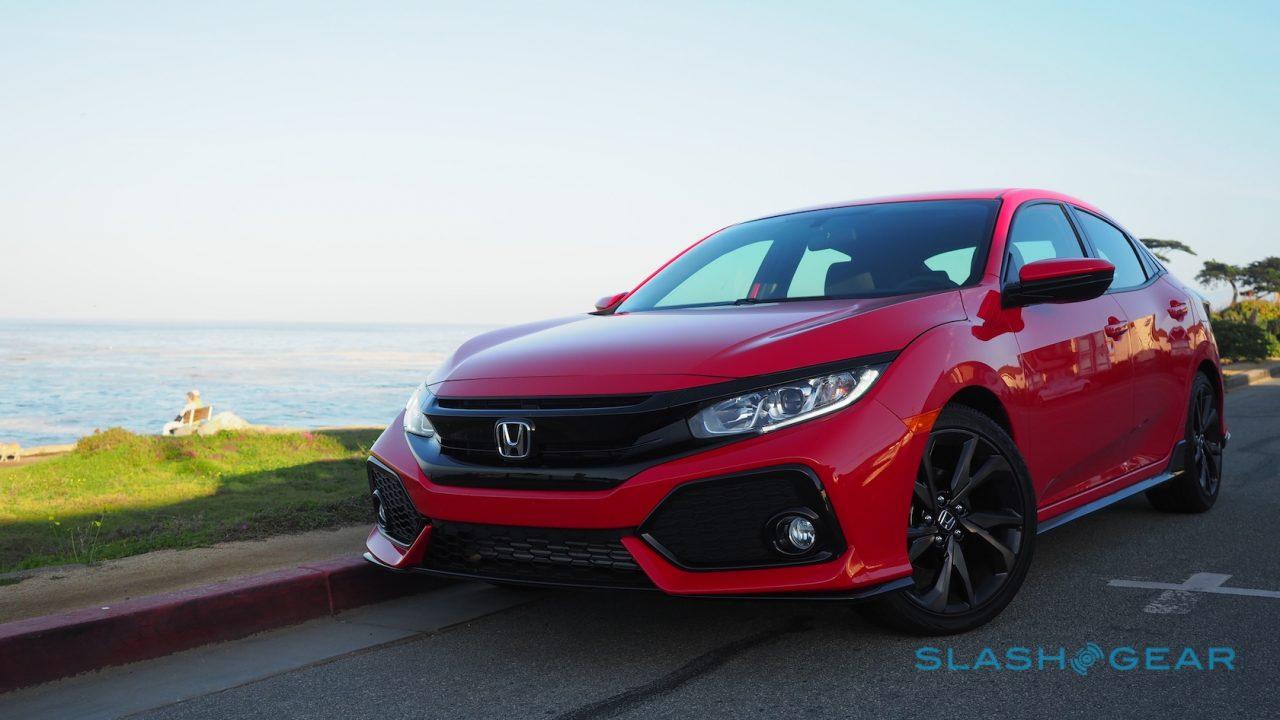 As a European who grew up seeing more hatchbacks than sedans in general on the road, I’m not entirely sure that this particular design perception holds true. In my experience, the hatch’s popularity in Europe is more about maximizing usable cargo and passenger capacity than being a wannabe racing driver. That said, I do prefer the rear styling to that of the Sedan, and you can’t argue with the practicality: 25.7 cubic feet in the back is segment-leading, and enough for three golf bags for instance.

Nonetheless, Honda has done more than just slap sporting pretensions onto the car. The variable ratio electric power steering has been tweaked versus that of its siblings, so that it’s smoother as you start to turn but more sporting in feel at its extremes. The damping has been increased at low-stroke speeds and decreased at higher speeds for better poise. Overall weight is down 62 pounds compared to the old Civic Hatchback, though the new car is still a little heavier than the Civic Sedan. 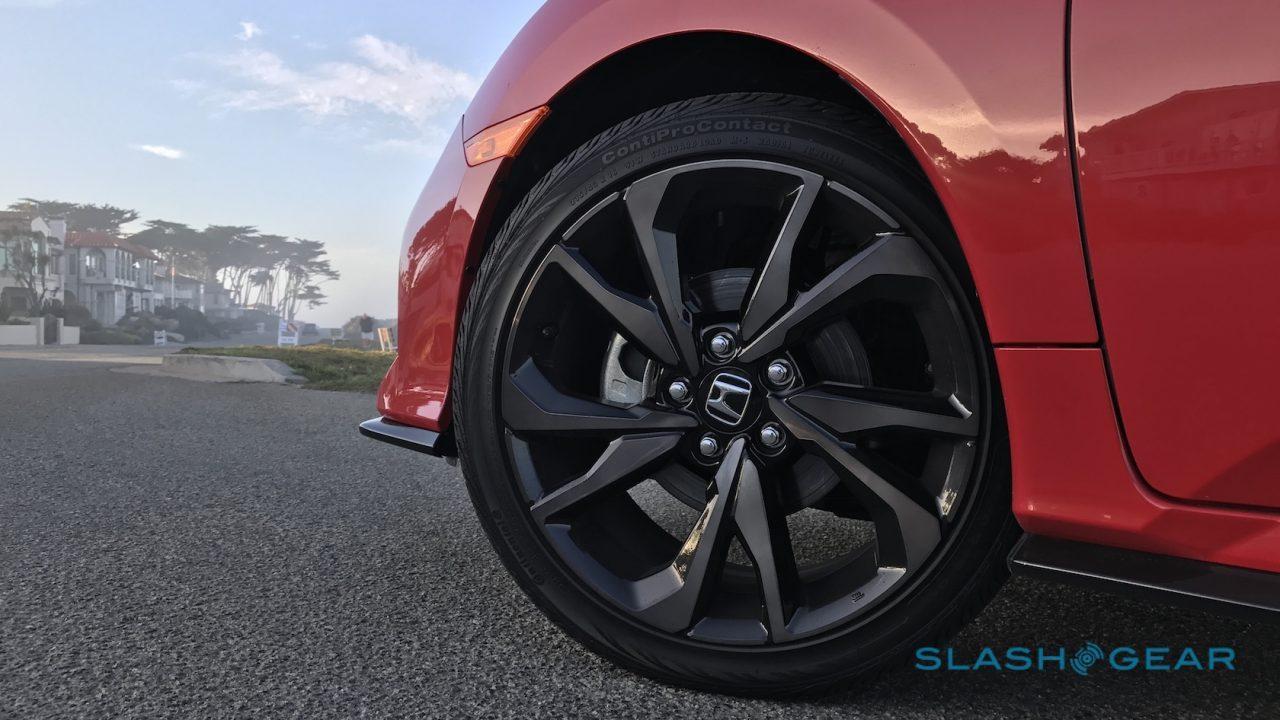 The range kicks off at $19,700 for the LX with a 6-speed manual; a CVT LX is $20,500. Then comes the EX, which most notably adds Honda’s upgraded Display Audio infotainment system – complete with Android Auto and Apple CarPlay – and after that the EX-L Navi, with leather, navigation, and an 8-way power adjustable driver’s seat. The Civic Hatchback Sport is effectively a more aggressive version of the LX, and comes in at $21,300 for the manual or $22,100 for the CVT. Finally, the Sport Touring is $28,300, based on the EX-L Navi.

The Sport Touring is also the only model to get Honda Sensing, the company’s suite of active safety and driver-assistance aids, as standard. Using a combination of radar and camera sensors, the system includes adaptive cruise control with low-speed follow, lane-keeping assistance, road departure mitigation, and collision auto-braking. It’s $1,000 if you want to add it to the LX, EX, or EX-L Navi. LaneWatch, which feeds a video from the passenger side door mirror to the in-dash display during lane-changes, is standard on EX and above; all trims get a reversing camera. 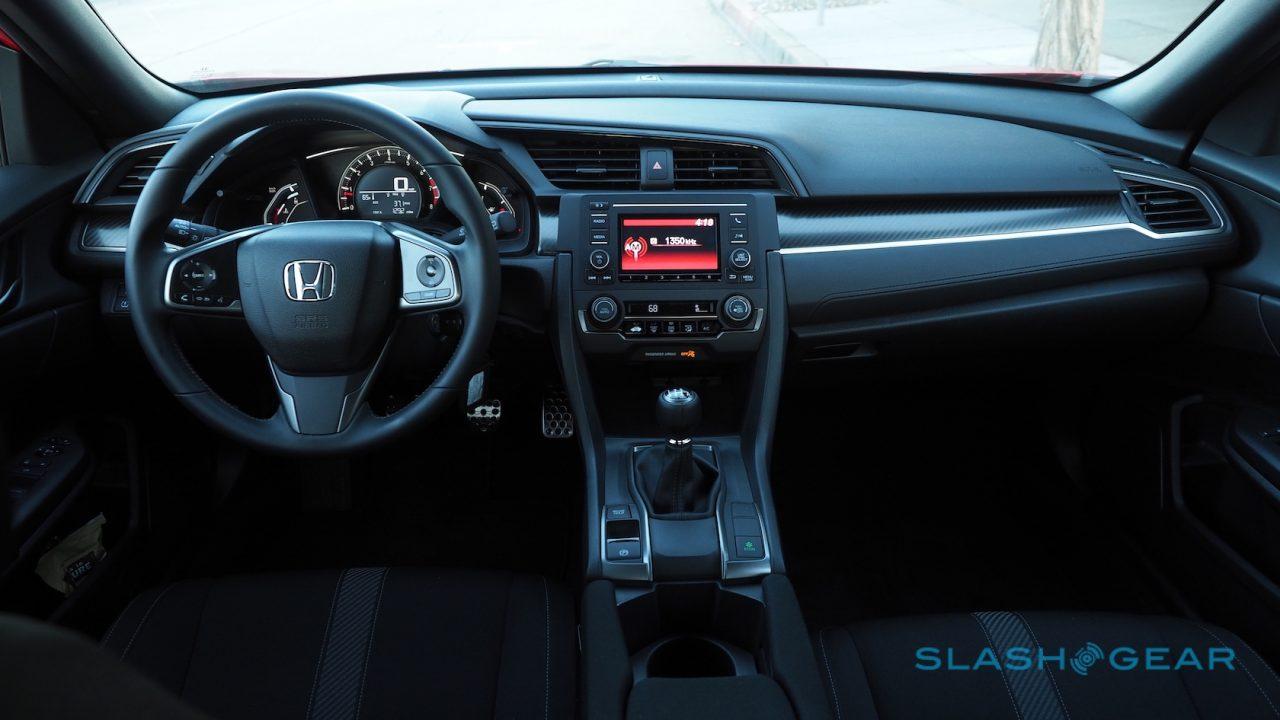 Honda is keeping things simple with the engine, offering just one choice to Civic Hatchback buyers. Happily, that’s the excellent turbocharged 1.5-liter we’ve seen in the Civic sedan and other models, here tuned for between 174 HP and 180 HP depending on which of the hatchbacks you pick. Maximum torque is 177 lb-ft. as long as you can handle a manual transmission; the CVT offers 162 lb-ft.

It’s enough for a claimed 0-60 mph time of 7.8 seconds in the fastest variant, though Honda drivers looking for frugality won’t be too disappointed either. Driven more cautiously and you’ll see 40 mpg, the automaker says. After a day spent mostly in the manual Sport, I saw low to mid-30s during more enthusiastic back-road driving, climbing to high 30s on highway cruising. 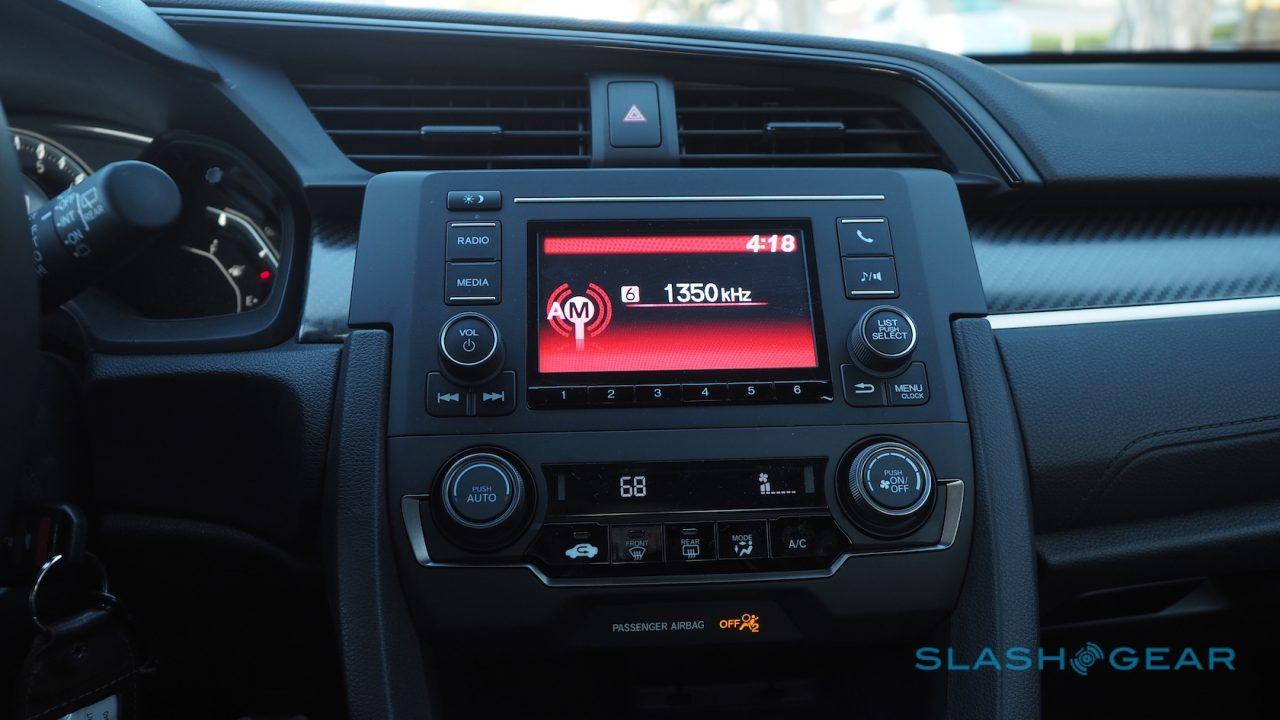 I question some of Honda’s spec and trim decisions. For instance, look at the two Sport versions of the Civic Hatchback, the Sport and Sport Touring: the former has the 6-speed manual transmission while the latter can only be had with the CVT and its paddles. Unfortunately that means there’s no way to have leather seats, the upgraded infotainment with CarPlay and Android Auto, and the manual gearbox: the former two are limited to the Sport Touring, and Honda doesn’t offer them as individual upgrades.

According to the automaker, the demand for manual cars in the US is so low that it’s simply not cost-effective to offer the transmission with a range of trims. All of Honda’s research suggests buyers of top-spec cars also want automatic gearboxes with them. That I can certainly see being the case for most of the vehicles in the company’s line-up, but I suspect Civic Hatchback buyers may see things differently. 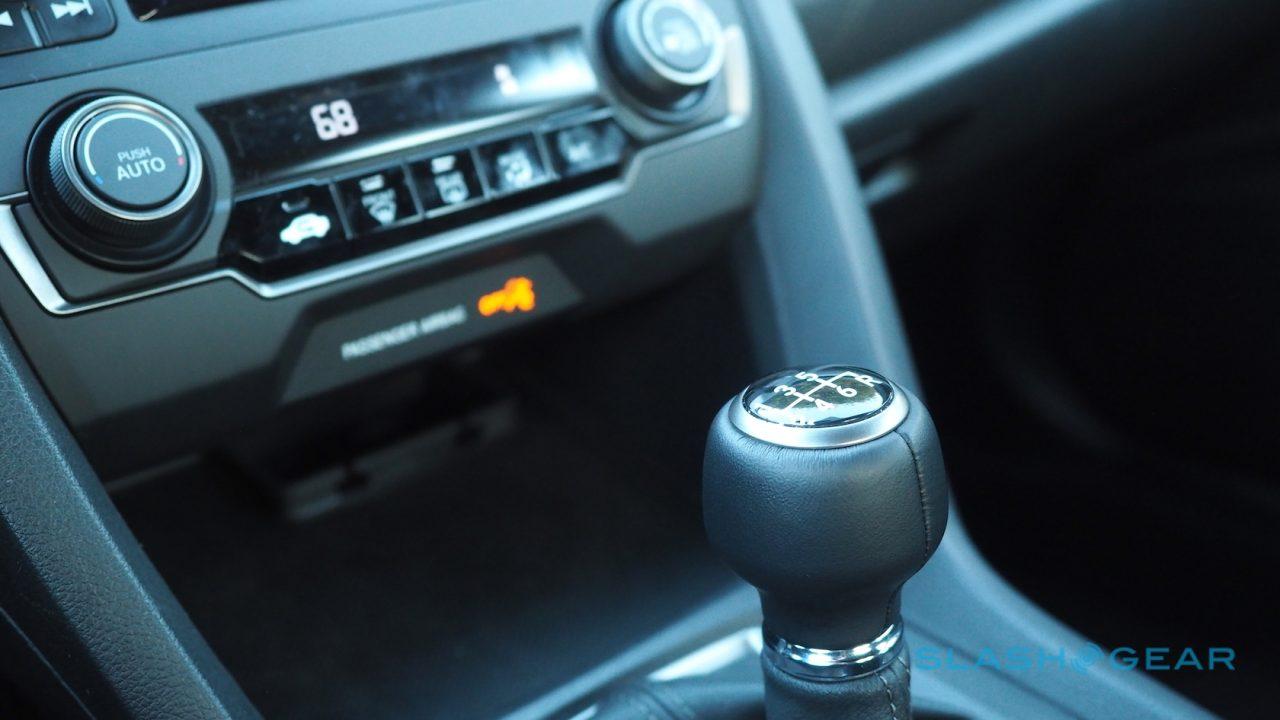 That’s because Honda’s 6-speed is just so damn good. The short, stubby shifter nestles neatly in the palm of your hand, with an easy, snappy throw as you work up through the ratios. The Civic’s engineers added a new synchronizer mechanism to smooth out gear changes and it shows, particularly paired with a clutch that manages to somehow deliver feedback without being so heavy as to frustrate in stop-go traffic.

In contrast, the CVT – which has a wider overall gear ratio for better fuel efficiency, Honda says – is fine, but unlikely to tickle you as the manual will. It’s fairly loud, and though it reacts promptly to the paddles, it still robs the 1.5L Turbo of some of its enthusiasm. Maximum torque, at least, arrives quickly at just 1,700 rpm. 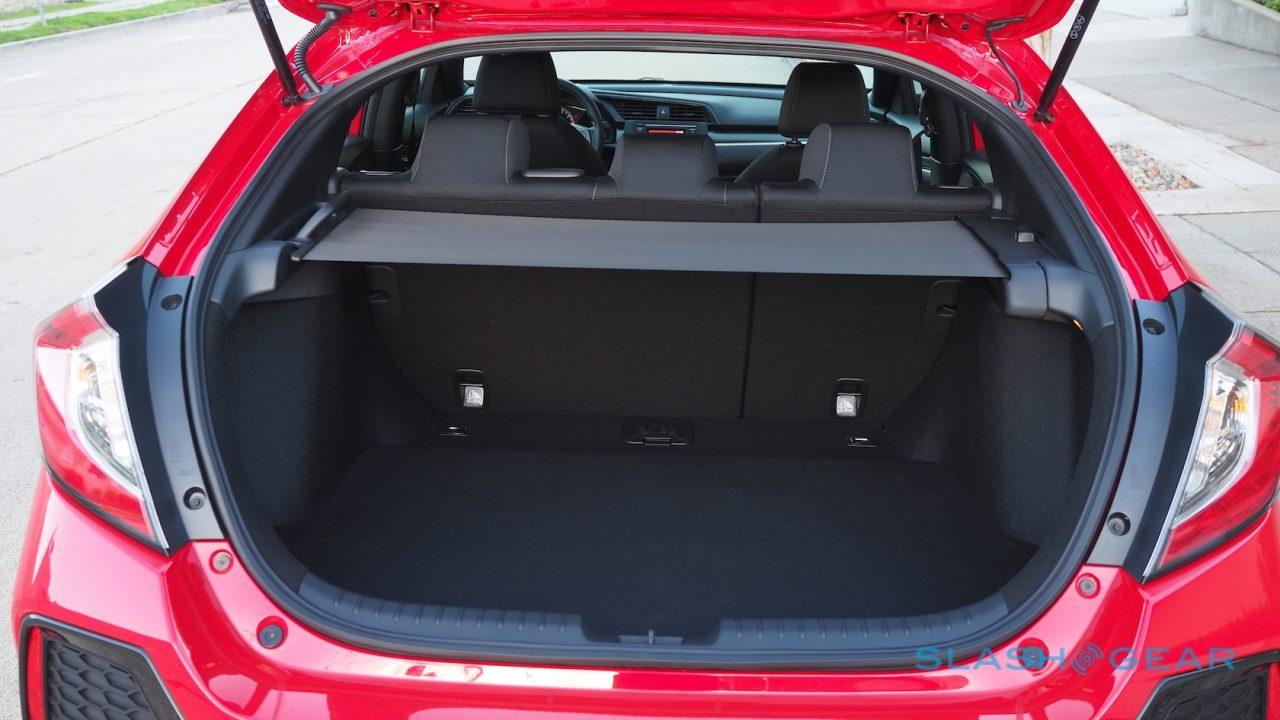 On the road, the steering is a little light for my tastes but the Civic Hatchback handles well. It’s steady and predictable in corners, and while there’s a little body roll it’s never unnerving. The manual transmission encourages interaction, with its slick shifts and light clutch making it more fun to work through the gears rather than rely on low-end torque. There’s not really enough power to get you into any real trouble, though, making for a good balance of fun and safety; those wanting a little more grunt and aggression will have to wait for the Civic Si and Civic Type-R for that.

Were I unable to wait for either of those, the Civic Hatchback Sport with the 6-speed would be my pick of the new line-up. At $21,300 (plus $835 destination) it’s affordable and playful, with all the practicality of its more restrained range-mates. 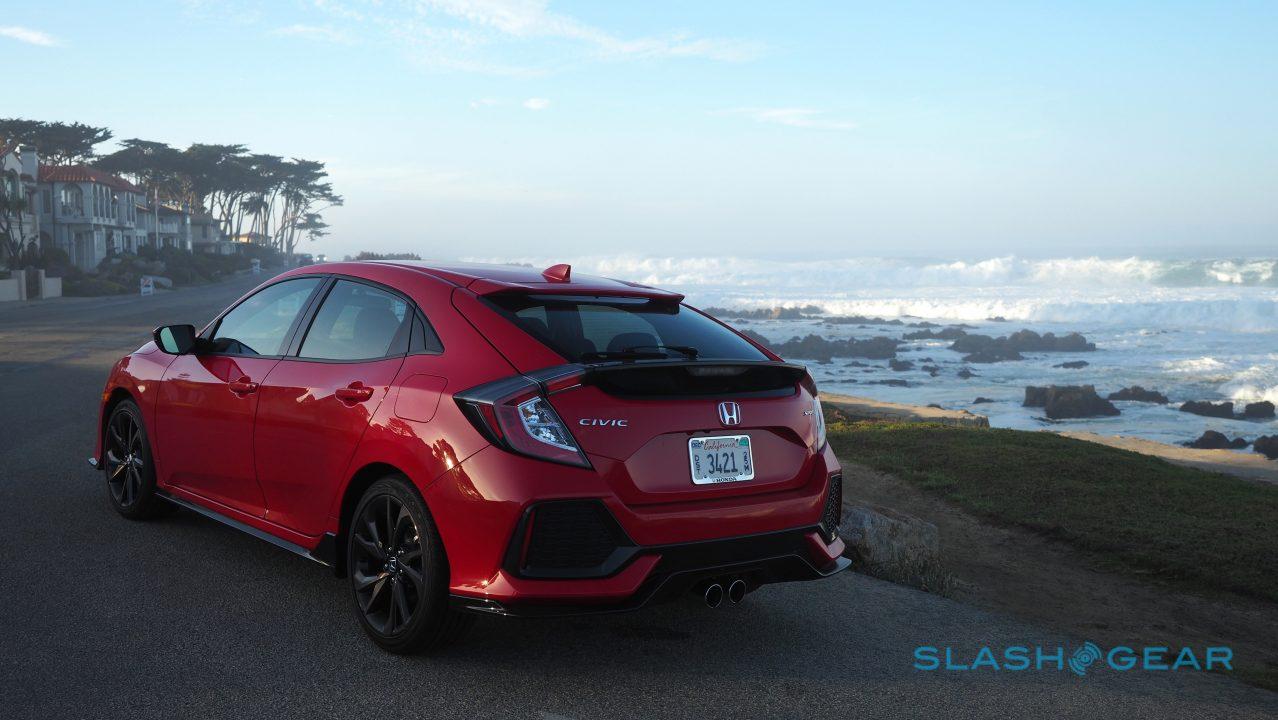 The interior is solid but errs a little on the plastic side; that’s fine in the low-20s, but had I paid nearly $30k for the Sport Touring I don’t think I’d be so forgiving. At least Honda’s leather seats are supportive and well bolstered, and there’s a good amount of storage bins and cubbies. The clever tonneau cover in the trunk, which slides out from the side rather than from a bar across the space, is an idea rival hatchbacks should steal immediately.

Can Honda reinvent the 5-door for the American market as a sporting car? I’m impressed, but still not entirely sure the 2017 Civic Hatchback quite differentiates itself from the Sedan and Coupe in the clean-cut way the automaker believes it will. Nonetheless, with very little cannibalization of either of those models predicted, the 40-50k sales Honda expects from it is icing on top of what’s already proved to be a very successful cake.