There’s one thing we can all agree on: the 2017 Ford F-150 Raptor is big. In the words of former NHL goaltender Ilya Bryzgalov, it’s ‘humongous big,’ even, a mass of steel and aluminum that expands to spill over the edges of every parking spot and muscles its way across the white line onto all highway shoulders (if not sidewalks). It’s a truck that weighs enough to crater the ground below should you ever screw up enough courage to take it off a really sweet jump, and it’s long to the point where its back-up camera should probably come with its own back-up camera and satellite tracking of the area immediately around the vehicle – just to make sure.

It’s also a vehicle that has been purpose-built to do a very, very specific thing, at which it excels. If you’re seeking a Baja-missile that can fly low over the roughest terrain the planet can throw your way, then the F-150 Raptor is an impressive hunk of machinery with few, if any peers. But what if you just want to take it on a road trip for a weekend getaway? 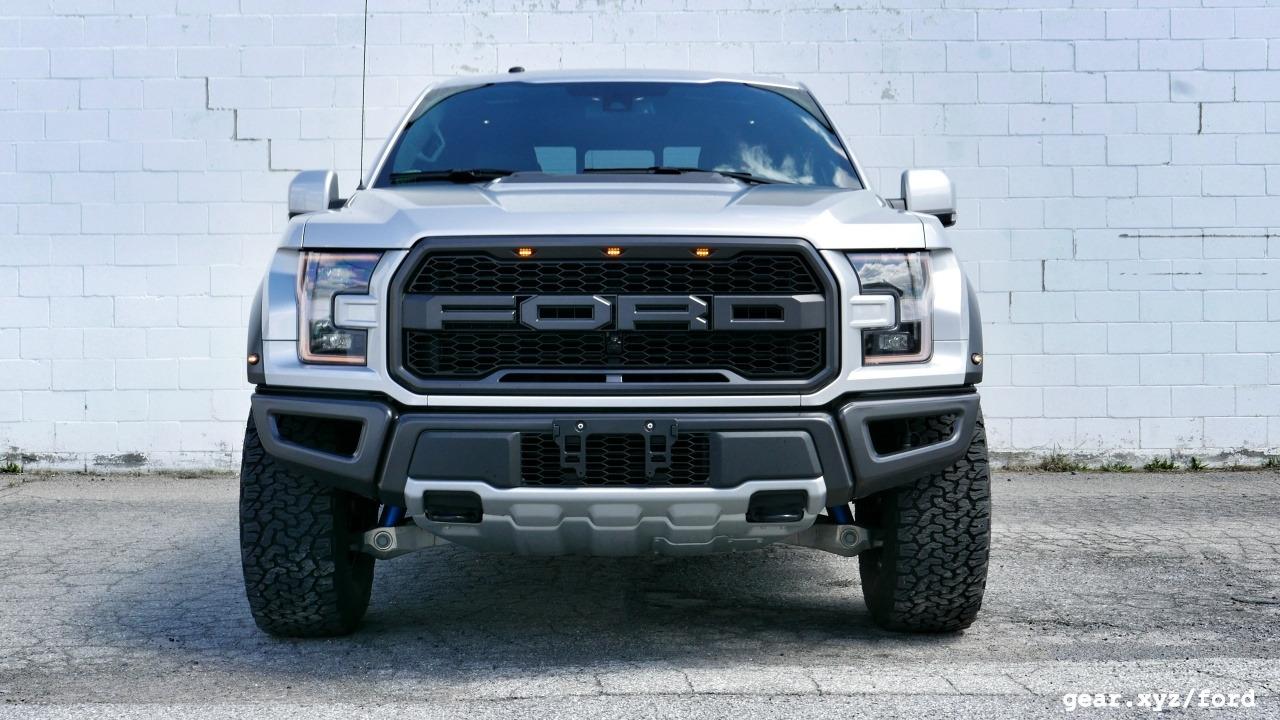 That was the question I set out to answer during my time with the Raptor: what is it like to helm this off-road supertanker the 300 days a year you’re probably not hitting the trail? After all, full-size pickups have become the daily drivers of choice for hundreds of thousands of Americans, which means there’s a strong chance Ford fans with a Raptor in the driveway will expect it to get them to work on Monday just as effectively as it blazed a trail through a mountain pass or across a flaming lake of lava and fire the Saturday before.

The answer is far from obvious. The Ford F-150 Raptor is 86 inches wide – almost seven inches more across than the regular F-150 – and when ordered in four-door SuperCrew trim like my tester, it measures just over 19 feet in length. It’s definitely a stretch to pull yourself up inside the truck’s enormous cab, too, what with its massive ground clearance giving it 6.5 feet of overall height and blocking it out of all but the most generous parking garages. Better tell the valet to keep it out front, where you can charge them rent when they slide a Miata or two underneath it.

Combine that bulk and breadth with a suspension system that’s oriented towards washboard and boulders rather than asphalt and on-ramps, you start to feel fairly disconnected from what’s happening when up to speed. The trucks’ 3-inch diameter Fox shocks and 34-inch knobby BFGoodrich All-Terrain T/A KO2 tires are insulators par excellence, necessitated by the desire to afford the Ford with 13 inches of front suspension travel and just under 14 inches of the same out back. These specs impress like no other pickup when putting the hammer down in the desert, but they don’t impart the same level of confidence within the confines of civilization. 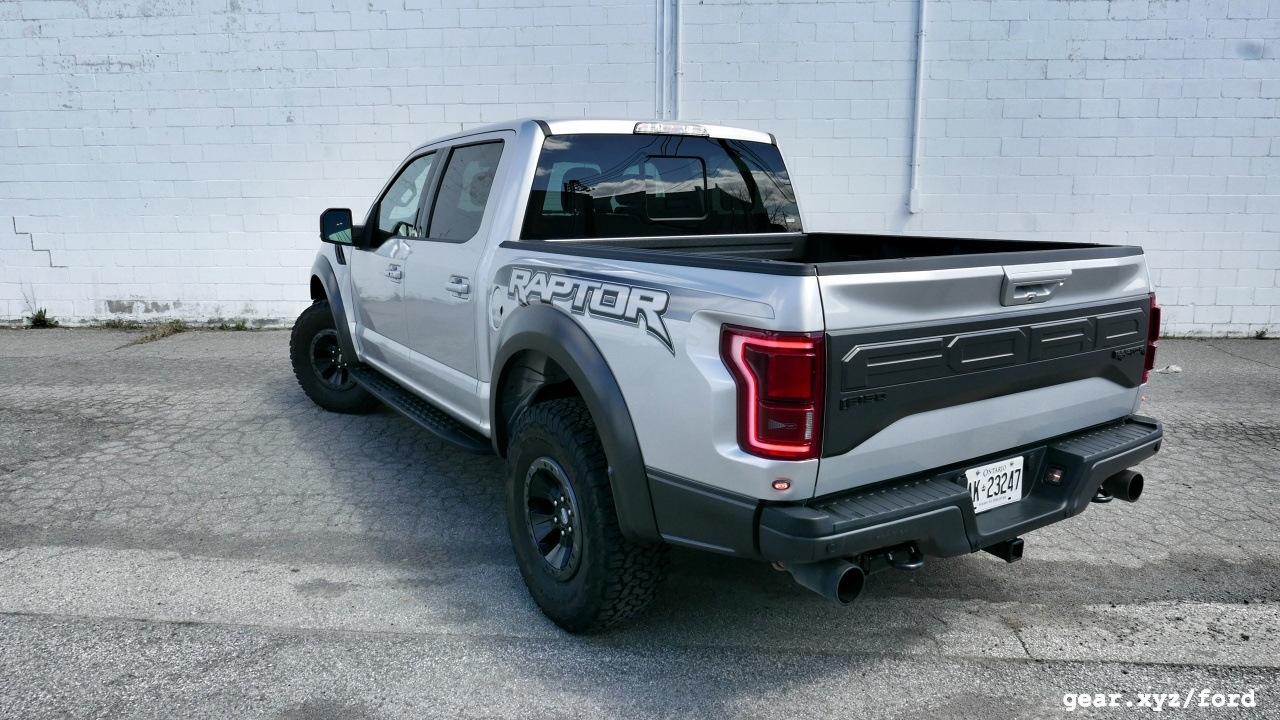 Or even, really when traversing 300 miles of two-lane blacktop on the way to Portland, Maine, from Montreal, Quebec, which was where I pointed the Raptor. The pathway I chose cut through New Hampshire’s White Mountains, and was scenic to the point of parody, but the twisting roads that link down-eastern America to the northern border were hell bent on flummoxing the F-150 Raptor’s chassis. The truck hemmed and hawed from one side of the lane to the next, its rear axle willing to break free in two-wheel drive mode should I become too judicious with my throttle application, and its center of gravity towered over me like a bully the entire trip.

I don’t expect an off-road truck to handle like a sports car, but Ford has created a unique situation with the Raptor by stuffing a 3.5-liter, twin-turbo EcoBoost V6 under its hood, an engine that generates a preposterous 450 horsepower and 510 lb-ft of torque. It’s not so much that these numbers provide the boosted F-150 with dangerous levels of acceleration – much of that thrust is attenuated by its 5,500 lbs of curb weight, and its mandatory 10-speed automatic transmission – but rather they highlight just how much space you need around you to truly enjoy the Raptor at full steam. When left in ‘Normal’ driving mode much of the truck’s performance is pacified, but switch over to ‘Sport’ or the ludicrous ‘Baja’ mode, which keeps the turbos spooled at all times, and you’re on a hair trigger to hitting a wall or crushing a subcompact should you twitch your right foot at the wrong time. 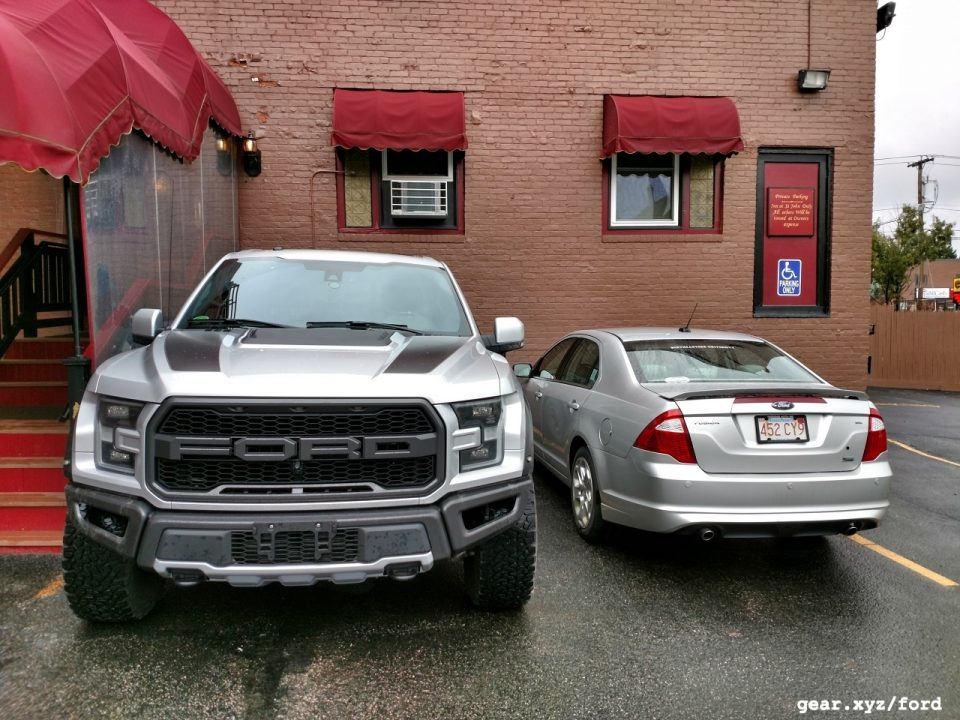 The truck is so large, heavy, and aggressively-sprung that even in the narrow, mud-slicked logging roads where I opened up the powertrain I never felt like I had enough of a margin for error if I needed to suddenly stop or change direction. That same sensation applied in the city and on country roads: hustling the Raptor was a nerve-wracking experience anywhere that lacked the luxury of big, empty run-off. Most other trail trucks avoid this gotcha by keeping power and gearing modest enough to climb mountains without tempting you to run the quarter mile, too, but Ford has blessed the Raptor with the kind of straight-line speed that was once the exclusive province of the SVT Lightning street truck. It’s a boon in the right circumstances, but in regular driving it had me feeling like a contestant on Fear Factor.

At the end of my 500 mile round-trip, during which the Ford F-150 Raptor averaged a thirsty 13-mpg, I found myself thoroughly confused by what the pickup had to offer. By significantly upping the ante in terms of power and off-road capability, Ford has created a monster that can really only be enjoyed as intended. In a way, this is the Ferrari Enzo of trucks, a vehicle whose finely-honed skill set is almost entirely wasted on the daily grind. If I had to do the trip over again, I’d gladly ‘trade down’ to a regular F-150 and not be bothered by all of the issues I listed above, let alone the troubles that present themselves when trying to park something that’s a full seven feet wide. That the Raptor is not for everybody is a given, but I submit that Ford has invested a significant amount of cash in this truck only to narrow its intended audience to a smaller slice of the pickup pie than it had with the original, V8-powered model. They say it’s lonely at the top, and for this special edition F-150, I believe it.