Audi has just revealed the pricing details for its latest R8 road car. That in itself is already great news for Audi’s fans and car fans in general. But even better is the fact that those who willing to put that much money on a 2017 Audi R8 or, better yet, its V10 Plus sibling, won’t just be getting the latest generation of a well-known model. They will be getting a road car whose DNA is mixed with race car performance. And not just from the original R8 prototype that broke records at the 24 Hours of Le Mans but, even closer, from the R8 LMS race car with which it share a lot more than engine in common.

The R8 has always been Audi’s pride and joy. It is a car that has brought it prestige throughout the years, starting with five victories at the world’s most prestigious endurance race. After all that, perhaps it’s time for the R8 to have a break? Well, as iconic motorsports commentator John Hindhaugh so poetically says, supercars don’t take time off.

Instead, the original R8 will be handing off the baton to a very worthy successor, the 2017 R8, or to be more precise, the R8 V10 Plus. Both models have the same naturally aspirated 5.2 liter V10 FSI engine and both also have the same seven-speed S tronic transmission with quattro AWD. But while the R8 V10 kicks at a 540 hp, accelerating from 0 to 60 mph in just 3.5 seconds, the R8 V10 Plus bumps the power to 610 hp and speeds up the acceleration to 3.2 seconds, with top speeds of 205 mph.

That isn’t the R8 V10’s only racing creds. For the first time, Audi’s road car was developed together with its GT3 race car counterpart, in this case the R8 LMS, which will be making its debut at the end of the month. This has resulted in a road car that not only shares the same V10 engine as the race car but almost 50 percent of the same parts, like an ASF aluminum construction. Even the design cues have similarities, giving the R8 V10 an even more prominent racing look. 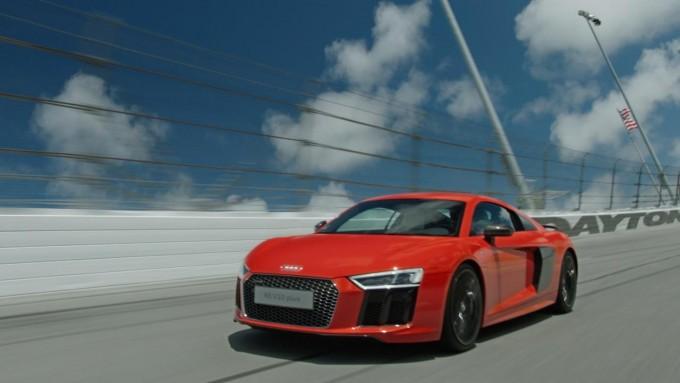 Our very own Vincent Nguyen had the joy of taking the R8 V10 Plus for a drive, where he walked away agreeing that Audi “has managed to deliver not only legitimately eye-watering performance with refinement too, but without turning the 2017 R8 into a Jekyll & Hyde affair.” Audi has taken painstaking care in the design and construction of this next gen R8, starting from a flat, wide, and muscular exterior that emphasizes the car’s racing heritage.

Inside, it’s all about the driver, with the car seemingly vanishing and becoming one with the person behind the wheel. Audi’s virtual cockpit incorporates the latest automotive technologies to match the 2017 R8’s modern personality.

The 2017 Audi R8 V10 will go with a starting price of $162.900. The higher performance V10 Plus model naturally starts higher at $189,900, both prices considerably cheaper than our estimates last year. To pile on the good news, the R8’s racing cousin, the R8 LMS will be heading out from the garage on January 30 to compete in the ROLEX 24 at Daytona, making its US debut in the world of racing.