I thought I knew what visceral meant. I also thought I’d never get used to the attention you draw, pulling up in a supercar. The McLaren 650S Spider educated me on both, first by smearing my body into a paste as it slammed me back against the seat with its fist of acceleration, and second with a jolt of unexpected patriotism.

The default setting for most British people is “mildly embarrassed demurring,” but I realized early on that it just wouldn’t fly with the 650S. Nobody – even in LA, where supercars are fairly commonplace – wanted an unnecessary apology and the explanation that no, it didn’t actually belong to me. They wanted horsepower and top speed and, often, to know just what McLaren is. 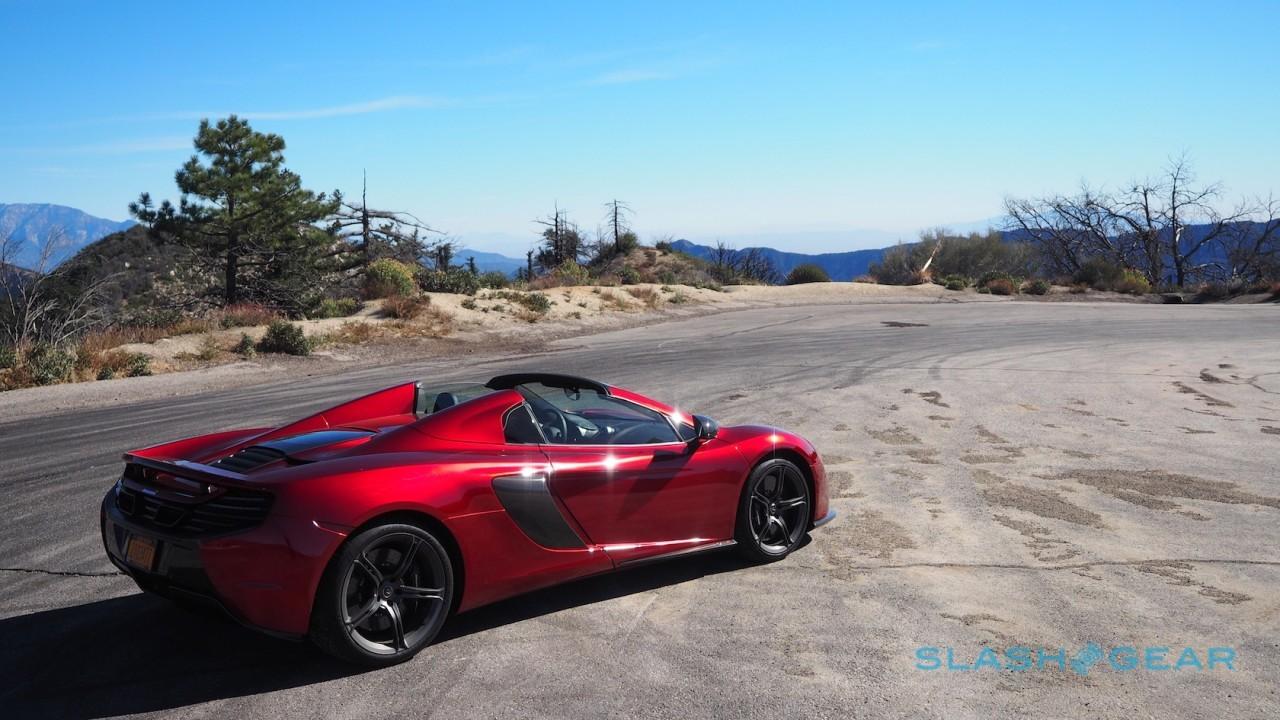 That’s where the patriotism comes in, because the people who Know Cars understand that McLaren is a big deal. Its racing heritage for one; the McLaren F1, which held the “world’s fastest production car” record for seven years and is rightly considered one of the finest automotive achievements ever, another. You try explaining the potency behind that nameplate, with the appropriate accent, to a cavalcade of the curious and not feel your chest puff out accordingly.

McLaren offers a variety of eye-searing colors for the 650S Spider, but I think it looks better in something halfway restrained, like this Volcano Red. That way some of the finer detailing isn’t lost amid screaming paint, like how the exposed carbon fiber folds and flows like cooling magma. 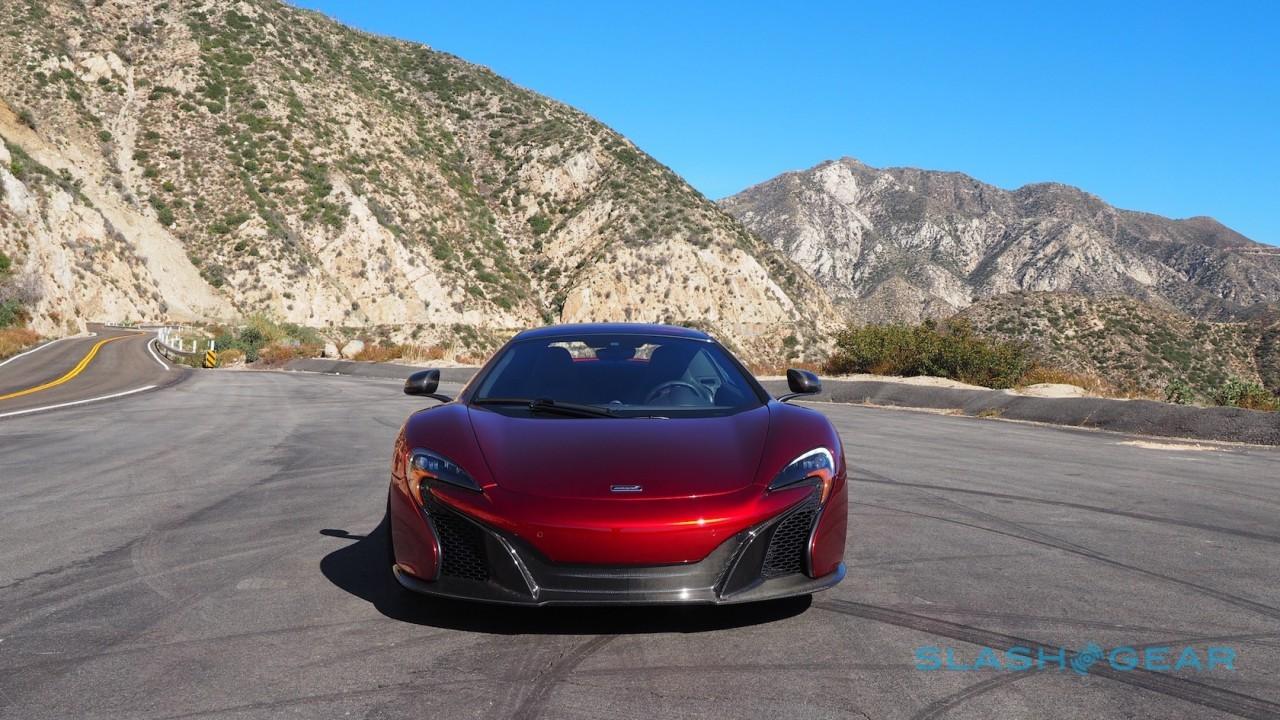 It’s more subtle than a Lamborghini or a Ferrari, certainly. The gullwing doors – which open to expose wide sills that you half-clamber and half-fall over in a way that reminds you that you don’t have long legs and will never be a handsome supermodel – almost feel like apologetic affectations, sprouted to pacify some of the crueler critics, but they make for damned good photos. 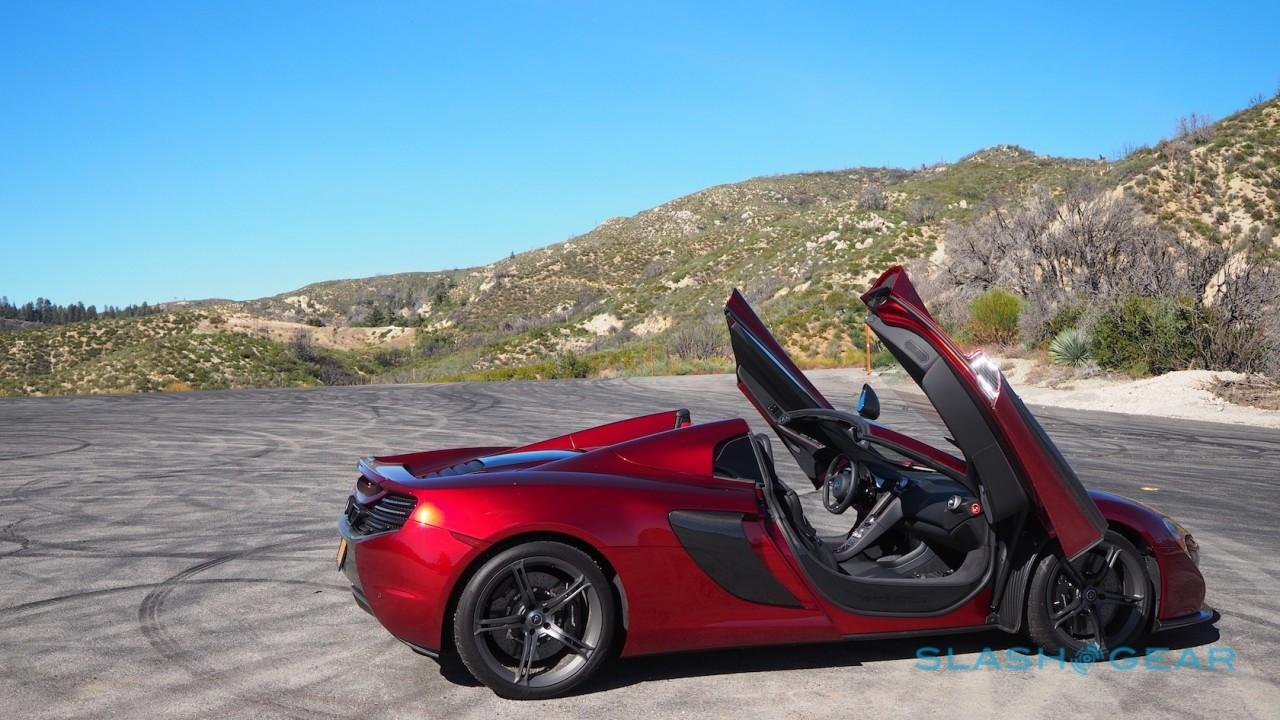 Of course, I’m talking restraint in relative terms. People notice you when you’re driving a supercar. Sometimes they try to catch your attention, too – honking at you, or shouting “is it a Lambo?” Grown men pretend to have children so that they can take photos “for them”. 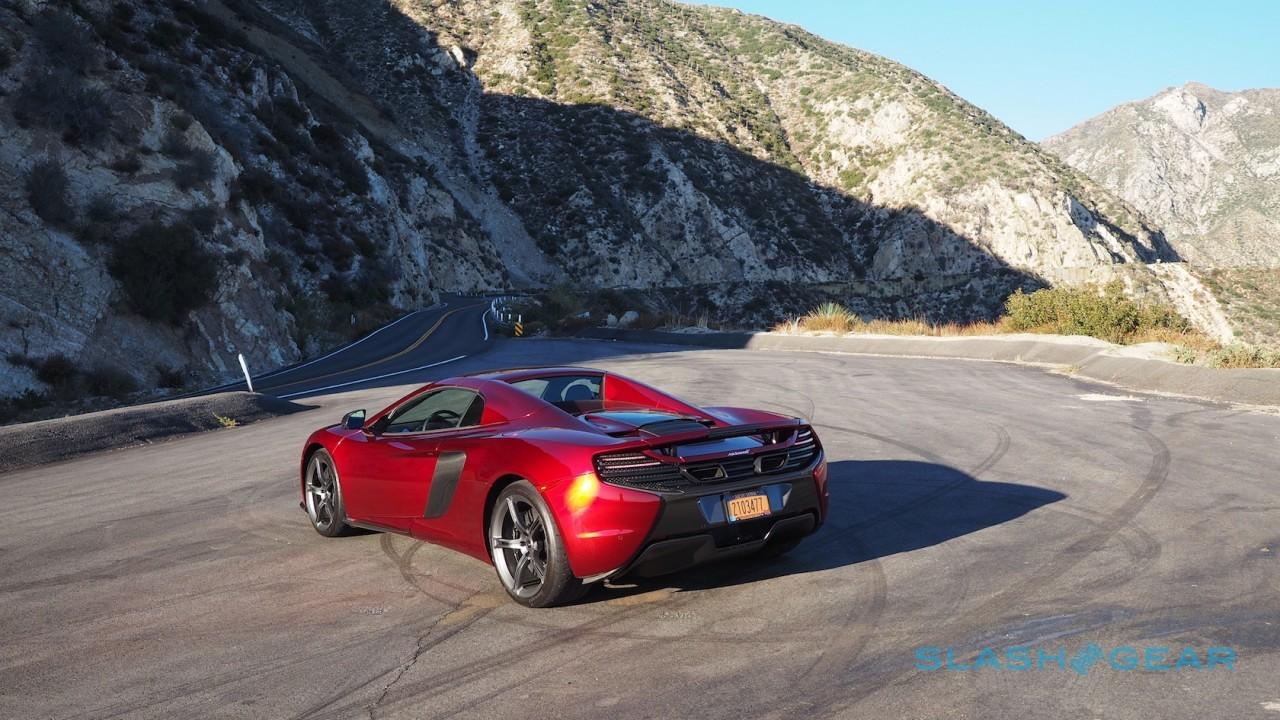 You usually don’t have time to react, though, because you’re focusing so hard on not screwing the whole damn thing up and having to sell every internal organ of any worth to pay back McLaren. In the city, you’re trying to visually guesstimate whether the camber of the next junction means you need to frantically tug the lever that makes the car lift up on its suspension, and in the process mildly dilute the chance that you’ll beach it like a carbon fiber whale.

On the highway, meanwhile, you’re suddenly hyper-aware of the fact that each lane is only in fact seven inches wide, and there are semis and battered minivans trying to occupy the same space that your delicately-poised side mirrors are dangling in. 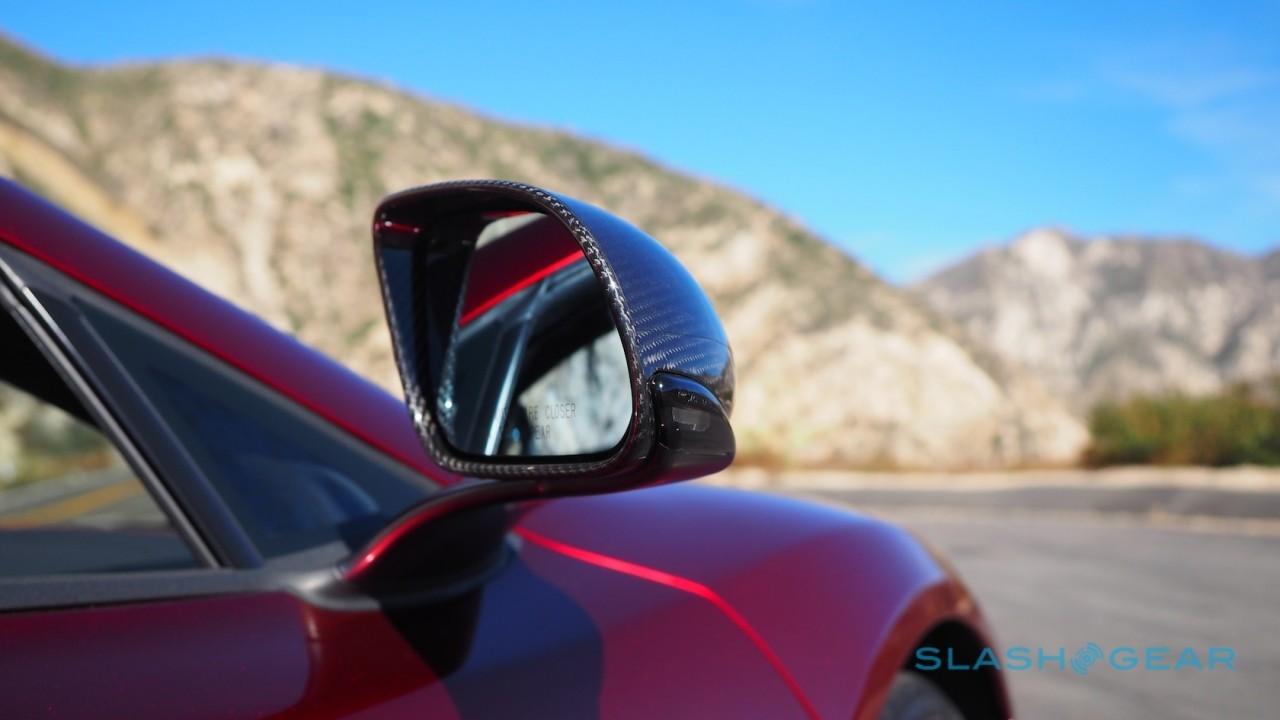 Then there’s the twisty stuff. There, you’re too busy focusing on how ridiculously precise the steering is. How amazing the engine sounds, less than a foot from the back of your head. How it doesn’t seem to matter what speed you go into a corner at, the car just grips and grips and grips, and shoots you out of the other end with a wide, slightly disbelieving grin plastered across your big, stupid, how-did-I-get-this-lucky face. 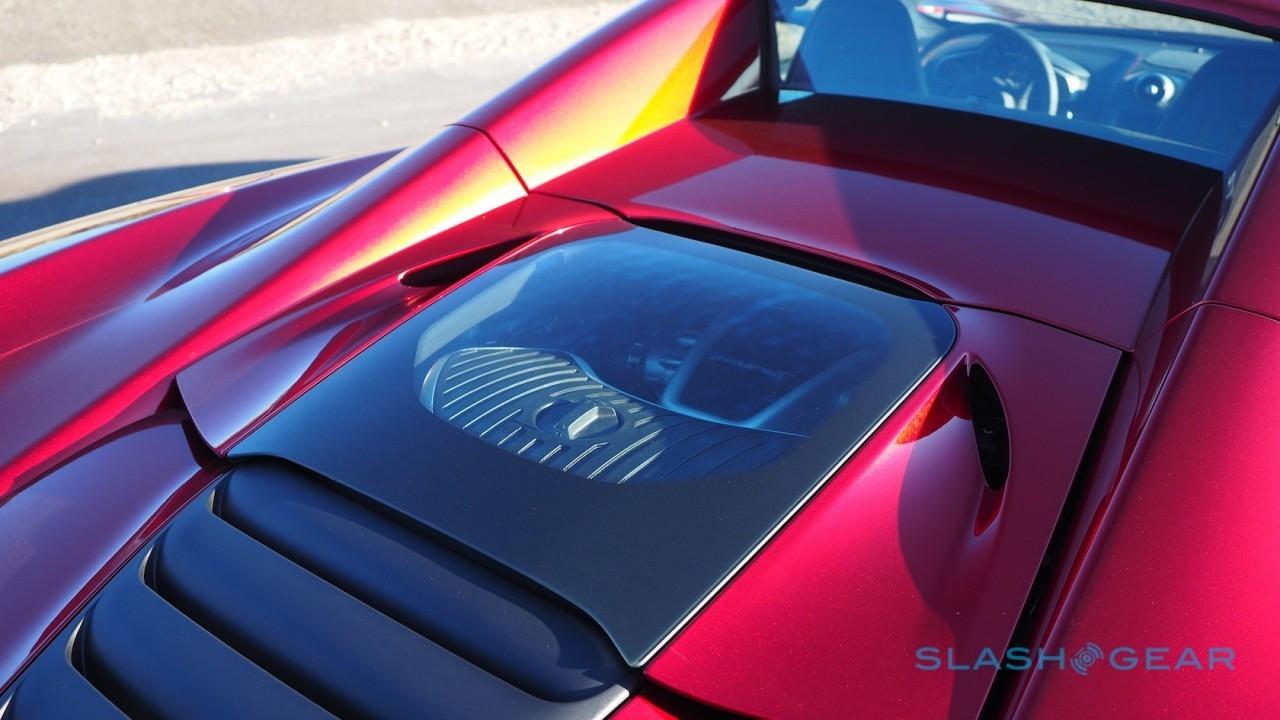 Mistake the slight British stoicism in the design for half-heartedness at your peril. Sitting right behind your head is a 3.8-liter V8 with twin-turbos, and from it McLaren’s engineers have coaxed 641 horsepower and 500 lb-ft of torque. I’ll leave the side-by-side comparisons with other supercars to Top Trumps: all you really need to know is that the 650S Spider will rocket to 62 mph in a quoted three seconds. 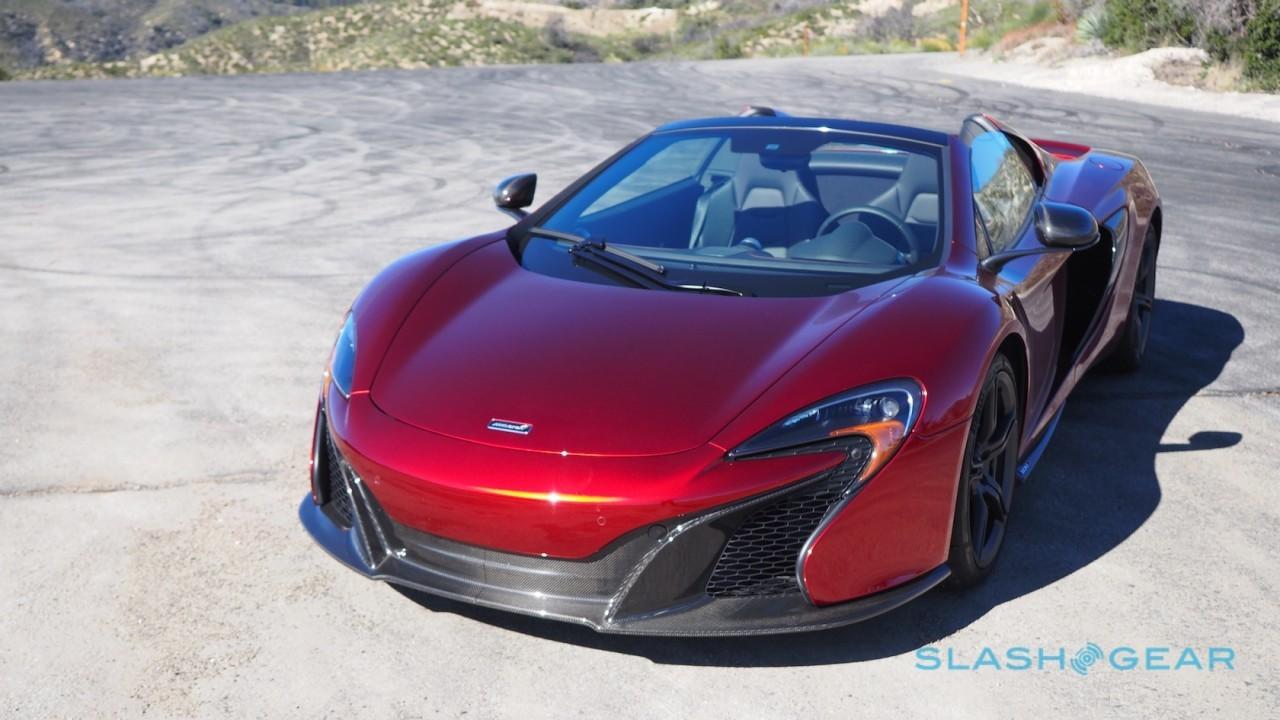 0-100 mph arrives in 5.8 seconds. Keep your right foot jammed down, keep snapping your way through the ridiculously immediate 7-speed, dual-clutch “Seamless-Shift Gearbox” with its cool, crisp little paddles, and eventually McLaren says you’ll see 204 mph on the LCD in the bottom corner of the oversized tachometer.

I didn’t see 204 mph. I didn’t switch the three-mode traction and powertrain system into Track, either; Sport, with the reassurance of having the electronics still watching out for me, was more than enough freedom for public roads. 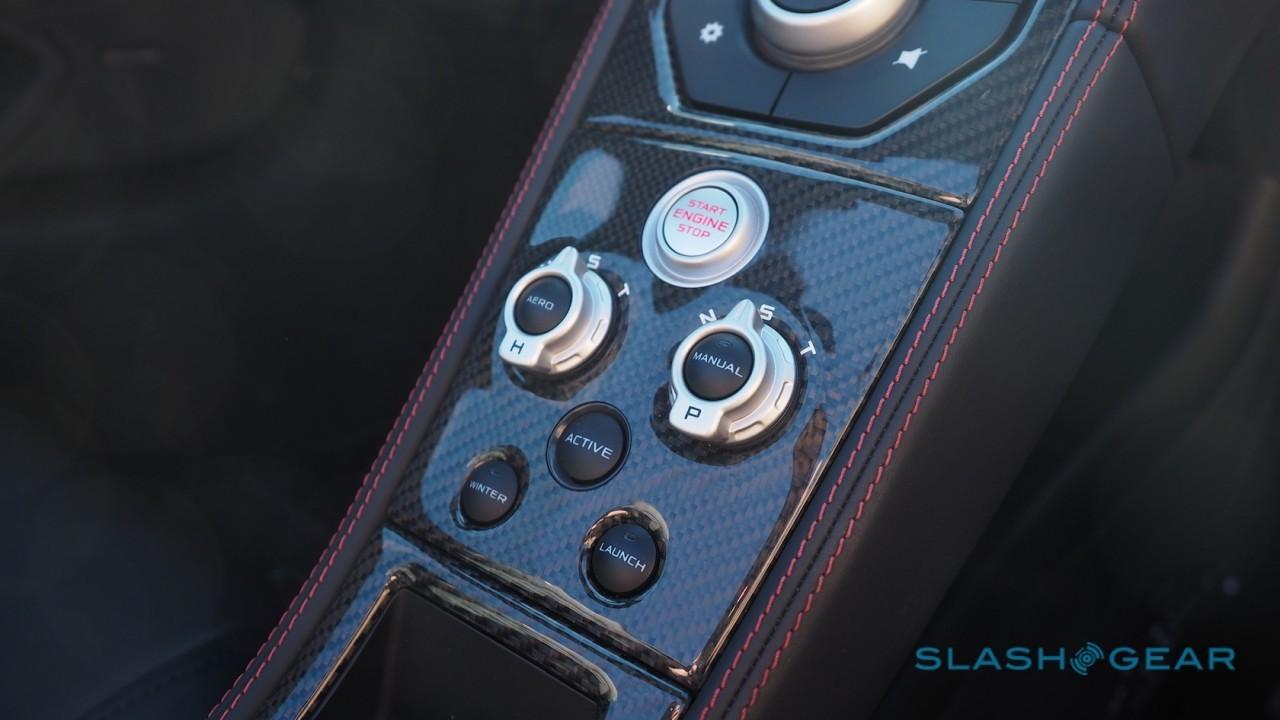 Shedding speed is perhaps even more abrupt. Each of the glorious forged sports wheels gets carbon ceramic rotors and they grip so hard I suspect they could do internal damage. Somehow, though, McLaren decided they weren’t quite enough. 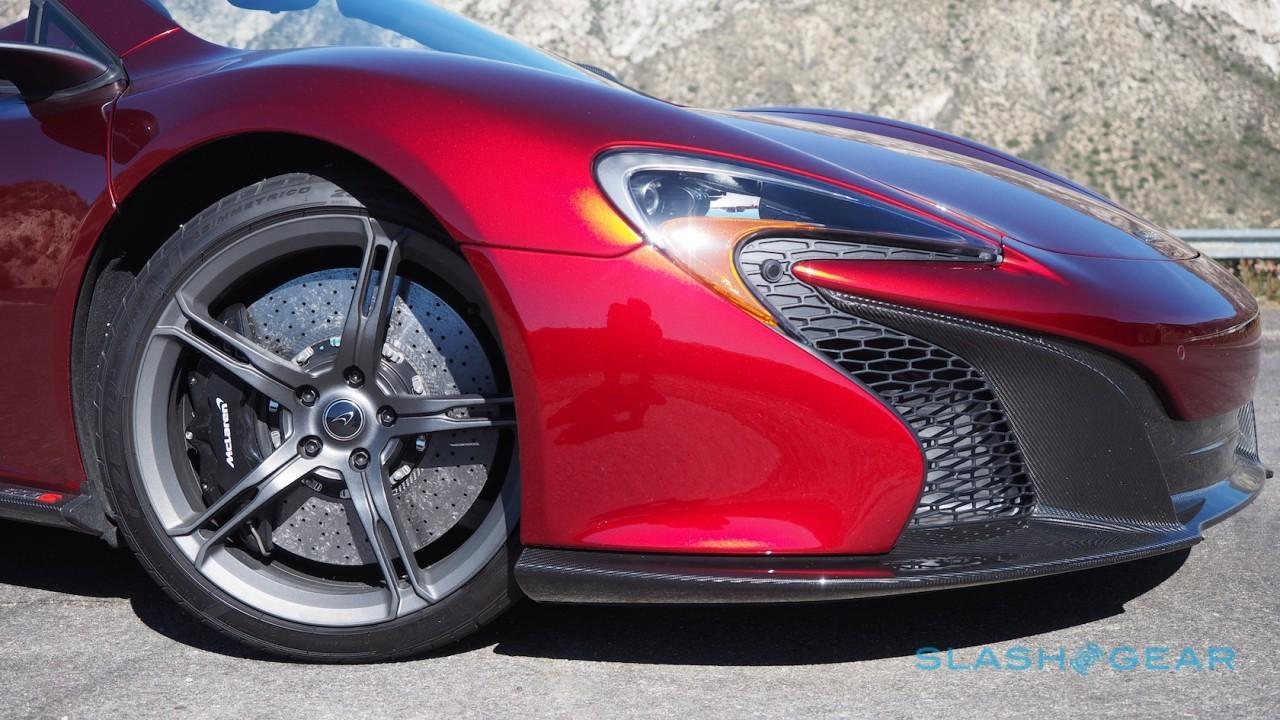 I don’t know if my fellow Brits who designed the 650S have a sick sense of humor or if I was just on edge, but there’s something deeply disconcerting about the air-brake slamming upright and filling the rear view mirror – just, you suddenly realize, as though a large truck is about to rear-end you – right when you’re braking hard to avoid the car ahead as it dawdles through the next corner.

I came very close to soiling the leather-clad sports seats. 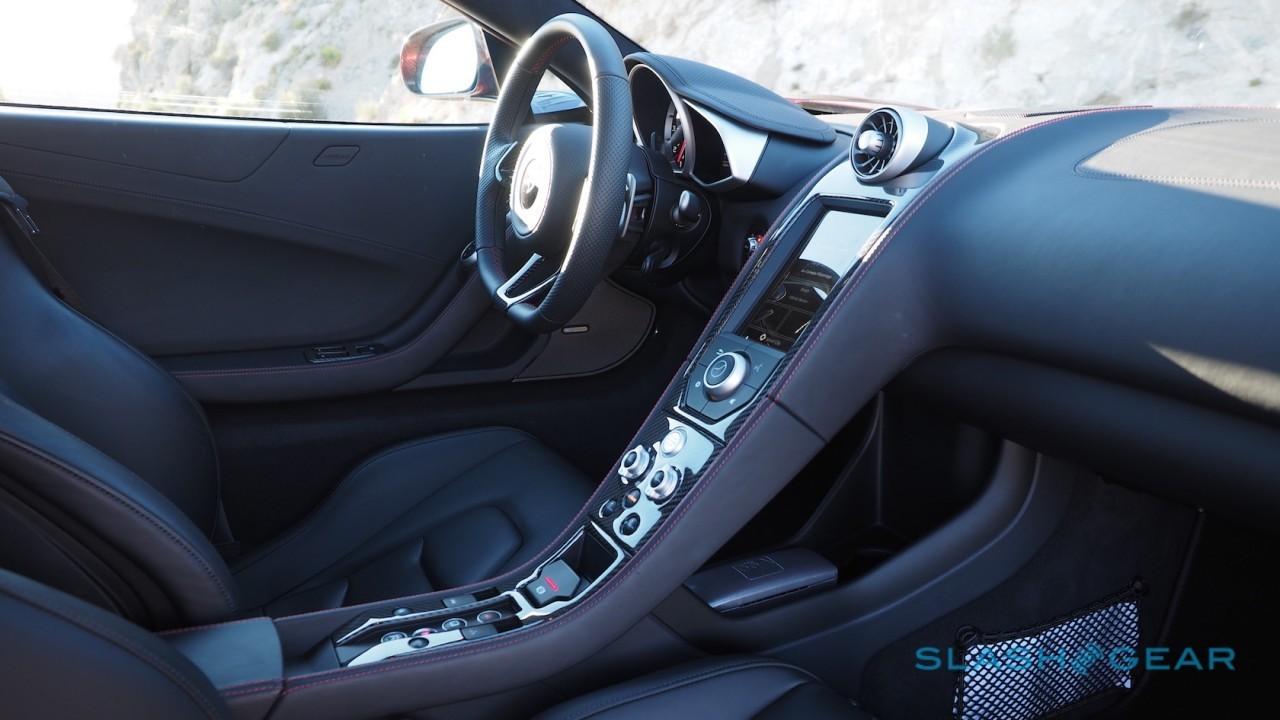 That would’ve been a shame, too, since the McLaren’s interior is rather special. Whoever had specified this particular 650S Spider clearly had excellent taste, ticking the box for the extra carbon fiber and red contrast stitching. It also had the Enhanced Technology Pack, an $9,950 add-on the most vital components of which are the parking sensors, reversing camera, and vehicle-lift. 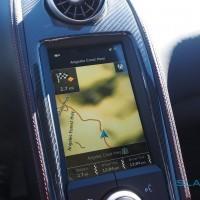 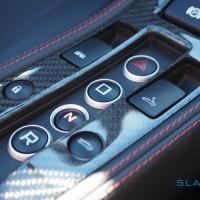 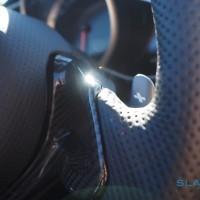 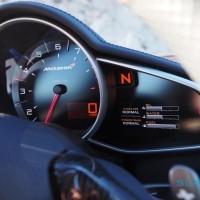 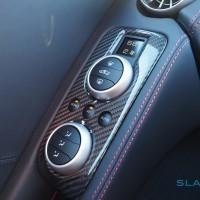 Your $10k also gets your the Meridian audio upgrade for McLaren’s Android-powered infotainment system. I’d like to tell you I gave it a full audition but I listened to it for the duration of about two songs and then turned it off in favor of the engine sound instead. My Spotify playlists paled in comparison to the gatling gun pops the 650S’ tailpipes stutter out in Sport mode, heard all the more clearly when you wait the seventeen seconds for the Spider’s two-piece hard-top to work its origami way behind the seats. 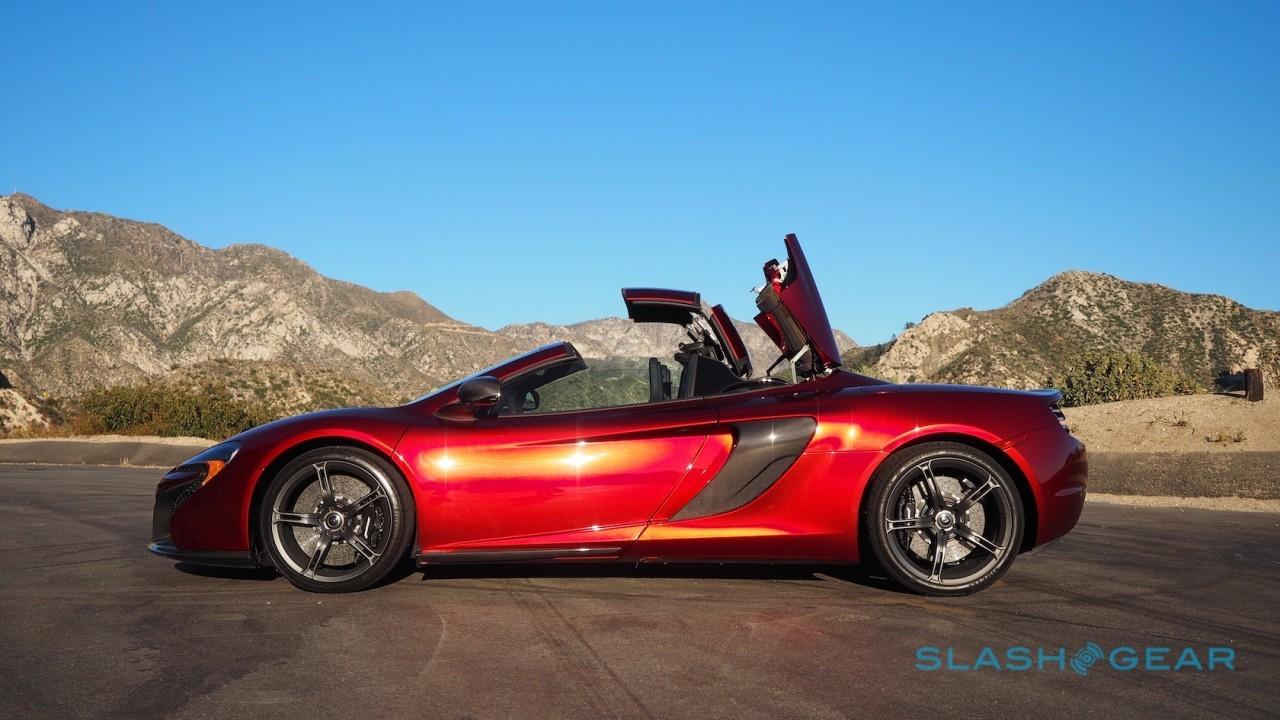 There are times – periods in-between the brief punctuation of abject terror that you’re about to total a $320k supercar – when you forget the fear and just go. Even in Sport mode, rather than Normal, it’s an astonishingly drivable car. Docile, compliant. I went to FedEx, picked up some groceries, and stopped in at Starbucks; ran everyday chores, and the McLaren made no more complain than I’d expect from a mass-market hatchback. 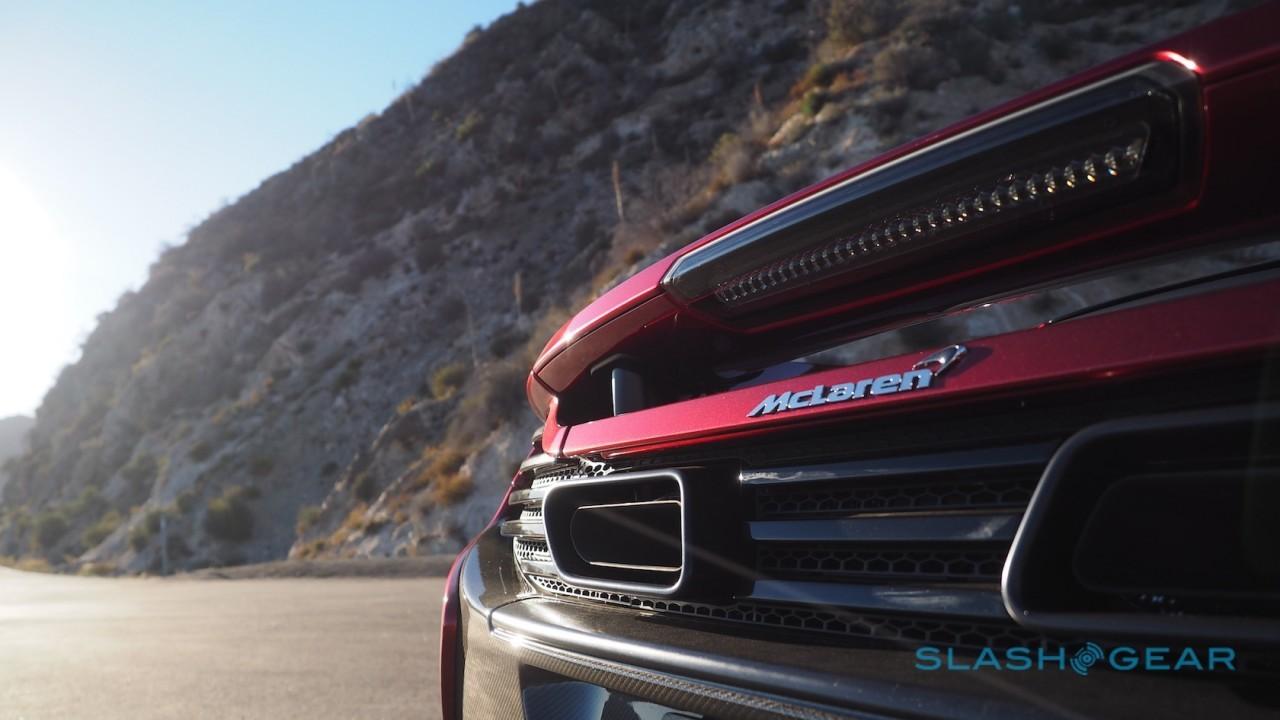 It’s just that most mass-market hatchbacks can’t catapult you away from the lights and then drag you to a halt moments later, something you’ll do over and over again because it feels so good. McLaren and the EPA even say you’ll get 18 mpg combined (16 mpg in the city, or 22 on the highway).

The 650S is far more car than I am driver. I don’t feel too bad, though; it’s better than the vast majority of drivers out there. Had I some track time I would’ve pushed harder, certainly, but you don’t need to in order to have fun. 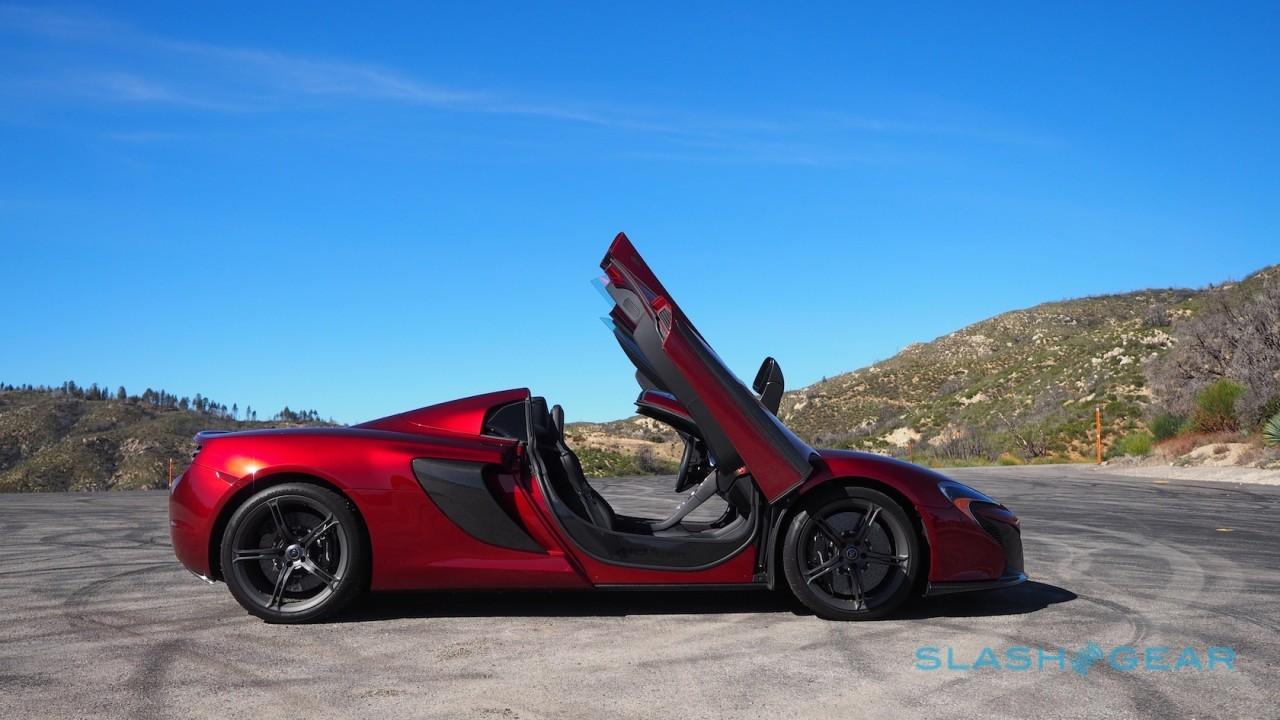 So let’s say you’re in the fortunate position of having a few hundred thousand dollars to spend on a super-exclusive, super-speedy chunk of automotive excess. Which car, in this over-simplified, “any choice is a good choice” world do you indulge in?

The traditionalist goes for the Ferrari. The narcissist picks the Lamborghini. Personally, though, I’d say the smart money goes on the McLaren. Best of British indeed.