Ford‘s take on the 2015 Mustang is no slouch, either in the looks or the performance departments as we found when we took the new Pony Car for a spin, but that hasn’t stopped some of the more notorious tuners from weighing in with their own interpretations. Roush and Saleen both have a long history of taking regular Mustangs and fettling them into something a whole lot more extreme, and each has begun sharing what they plan to do with the new car.

For Saleen, both the Mustang coupe and convertible will be on offer, tuned up to three different degrees of performance. The 2015 Saleen 302 Mustang will be offered as a White Label, Yellow Label, and Black Label custom, each using a 5-liter V8 but with as much as 640 HP and 565 lb-ft of torque.

Manual or auto transmissions will be up for grabs, both six speeds, with a choice of final gear ratios, and of course there’ll be a custom body kit with lashings of carbon fiber.

Custom suspension, wheels, and brakes are included, along with a special interior with leather and various Saleen-logo components.

As for Roush’s car, according to Automobile’s preview there’ll also be various levels of tweaking going on. The tuner will offer RS kits for the entry-level V6 Mustang, RS1 for the mid-range EcoBoost that so impressed us in our first-drive, and an RS2 that builds on the 5-liter V8. RS3 is expected to add a supercharger to the V8, which is normally naturally-aspirated. 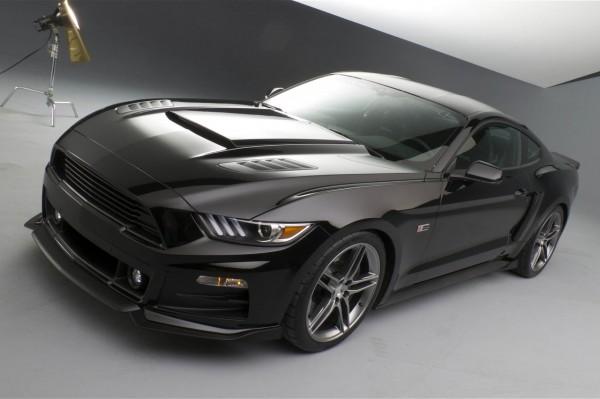 Styling-wise, there’s a more aggressive, angular nose that extends further forward than the stock body kit, while the hood gets new vents and an optional scoop. At the rear, there are new fender vents and a matching fascia, along with a new spoiler, with Roush claiming better aerodynamics overall.

20-inch custom cast wheels get grippier Cooper RS3 tires, and Roush will be upgrading the standard Mustang Performance Package with new brake pads and rotors, along with different coil-over shocks.

Saleen is taking deposits – $2,015 gets you in line – for its new 302 Mustang, though Roush is yet to confirm pricing. Both expect to spill more details later in the year.