“What’s with the bee?” An angry insect might not be the most obvious mascot for a 485 horsepower muscle sedan, but the 2015 Dodge Charger R/T Scat Pack certainly has enough sting to keep the hive happy. And, though it’s not the Hellcat that tops the Charger line-up, kicking off at under $40k makes this particular Dodge a very interesting one indeed.

At a time when most manufacturers are playing with turbochargers, Dodge keeps delivering the huge displacement that traditionalists demand. In the case of the Charger R/T Scat Pack that’s a 6.4-liter V8 HEMI courtesy of the team at SRT, delivering not only all 485 aforementioned horses but a blistering 475 lb-ft. of torque. 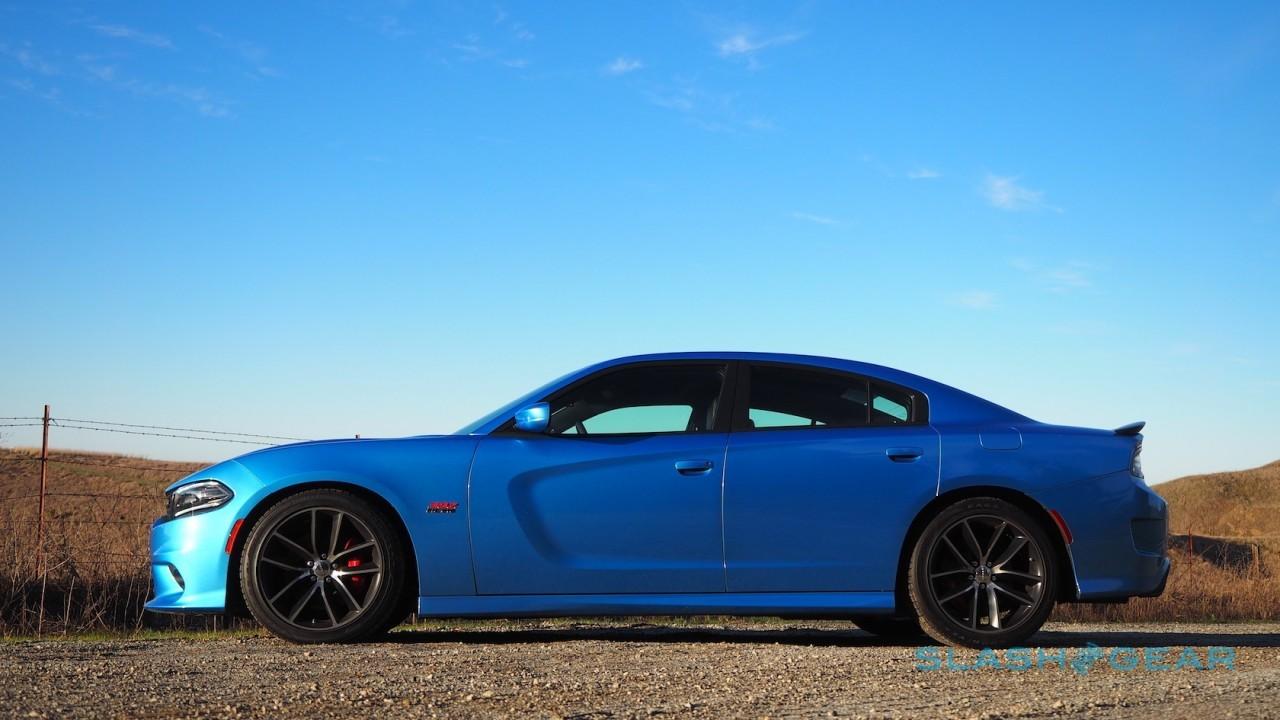 Nobody ever accused the Charger of subtlety, but the R/T Scat Pack goes further than most. The dreamy B5 Blue finish is almost as eye-catching as the twin tailpipes are loud, while the smokey 20-inch wheels and huge hood bulge give the car the stance its numbers deserve.

In terms of Dodge’s line-up, it slots in-between the regular Charger R/T and the Charger SRT 392. Compared to the latter, you keep the 8-speed TorqueFlite auto transmission but lose the three-mode suspension, while the Brembo brakes are slightly smaller and use four pistons rather than six, while the wheels slightly narrower. 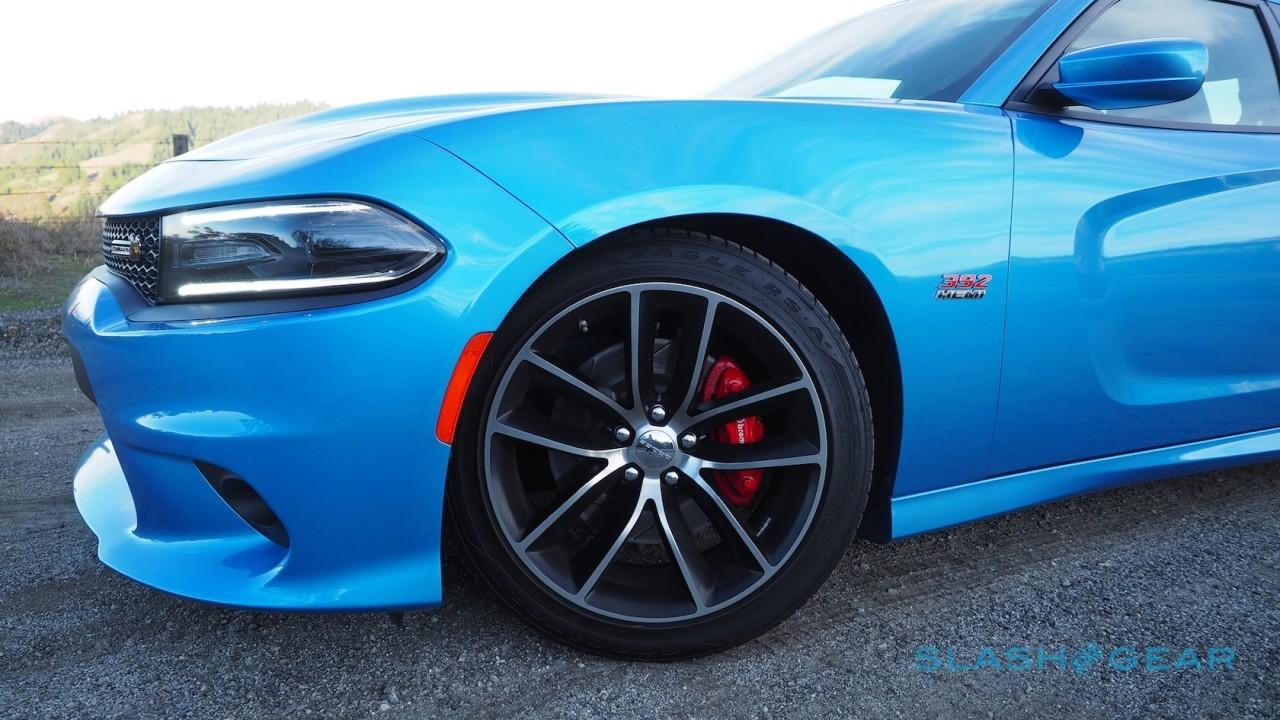 It’s no less attention-grabbing, mind. I didn’t dare poll them, but I suspect my neighbors quickly came to hate me, given the noise the R/T Scat Pack makes when you hit the starter button. Think along the lines of “angry baritone wildcat meets furious bees’ nest” and you’re on the right track.

Things don’t get much less raucous on the move, either. There’s a fair amount of tire noise, and the engine note is always fairly noticeable, even at highway cruising speeds. 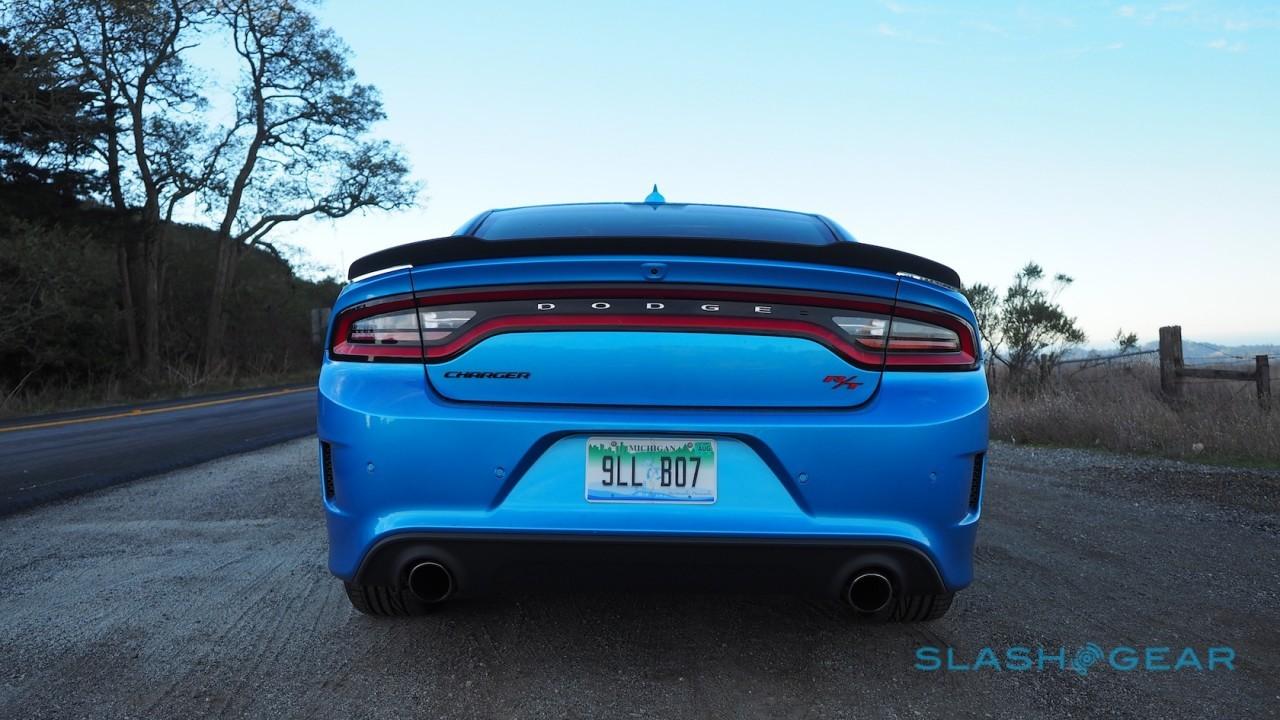 I confess, the Charger came in for some above-average competition during my time with it, given that McLaren had handed me the keys to the astonishing 650S. At getting on for ten times the price of the Dodge, you’d expect the British supercar to be better to the point of superlatives, but the meaty American held its own in many ways.

Sure, the 650S would trounce it on the track – or, for that matter, on more interesting public roads with a reasonable driver at the helm – but the Charger’s 4.5 second 0-60 mph time is legitimately quick, and its 175 mph top speed nothing to be sniffed at. 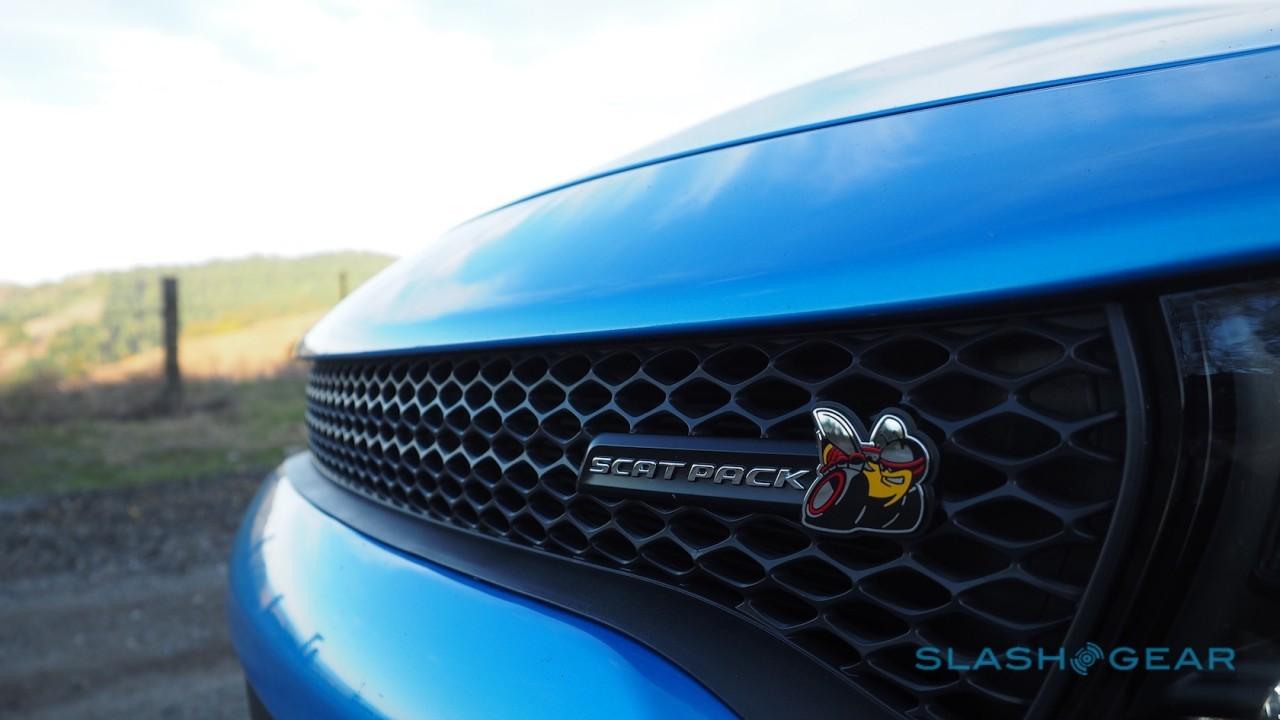 There’s also the giggle factor, something which comes not from the bee but the bludgeoning of power as the Charger kicks you in the small of the back and rockets you down the road. Spinning the wheels is ridiculously easy to do, but avoid a lead foot and, with some nuance, you can coax all that energy into something more useful.

It’s insanely quick in a straight line – there’s Launch Control if you want to let the computer do its thing – and the 8-speed transmission shifts swiftly and smoothly, whether you leave it to its own devices or yank on the small paddles behind the wheel. 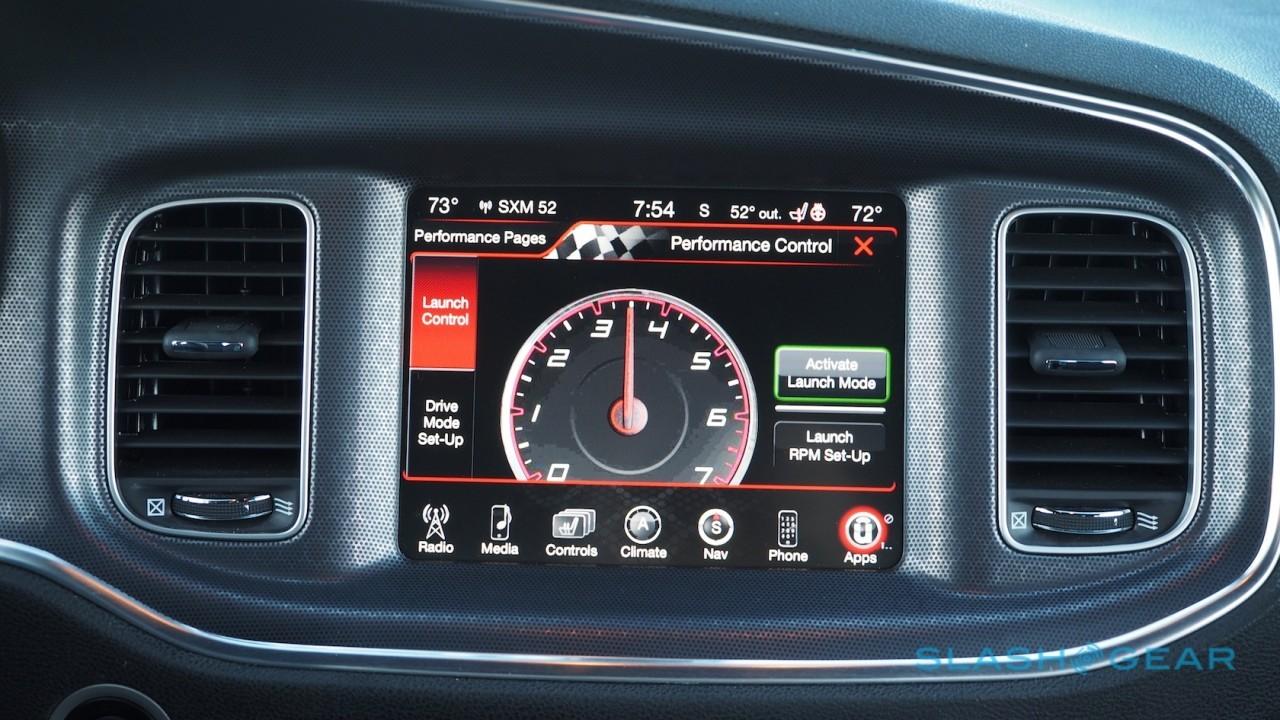 Sport mode is a button-press away, tightening up the throttle response and gear changes, tweaking the traction control, and adjusting the steering. If you’re inclined to fiddle, you can customize some of the settings yourself using the touchscreen in the center stack.

Cornering, meanwhile, demands a little faith. With all those liters under the hood, the Charger is unsurprisingly nose-heavy, but oversteer is predictable and the electronic nannying strikes a nice balance between keeping you safe while also letting you have some fun when it’s appropriate. A dab of extra power is often all it took to bring the RWD Charger back into line. 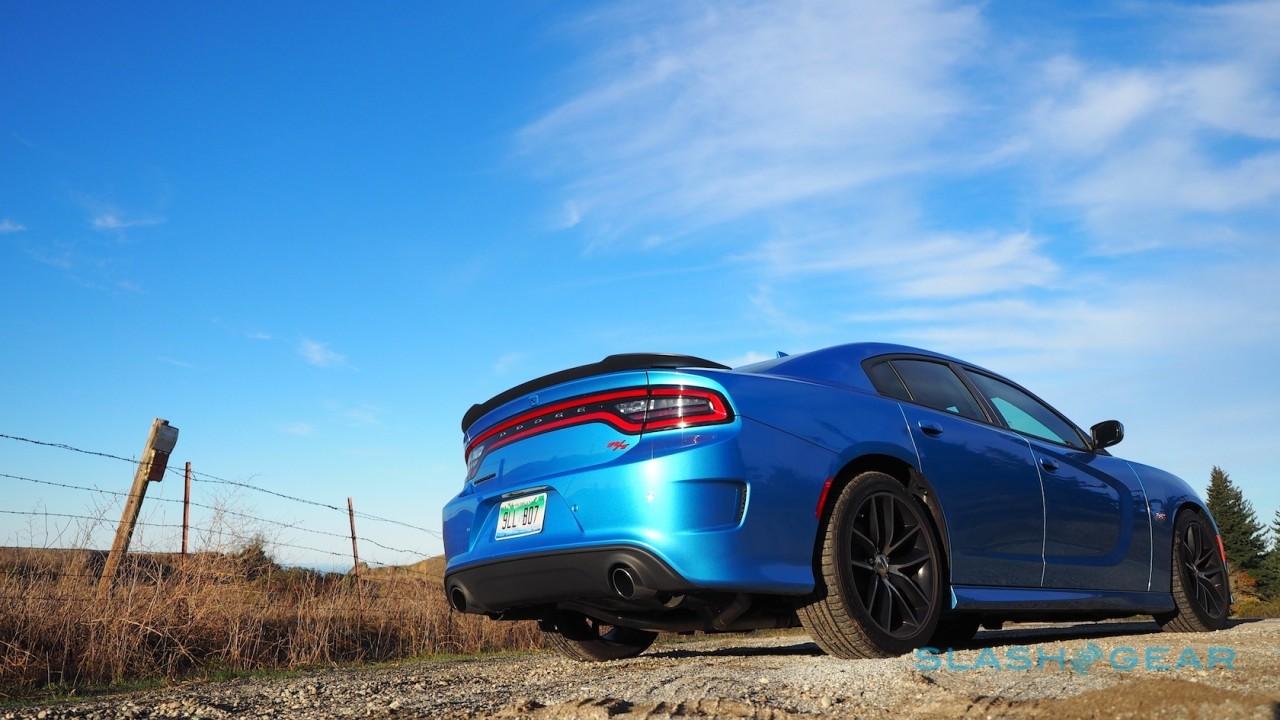 The brakes may be downgraded compared to the SRT 392, but the compromise doesn’t show. The Charger hauls itself to a halt with the sort of reassuring predictability you really want in a car of this sort.

Unlike more advanced V8’s the R/T Scat Pack’s HEMI doesn’t do any fancy cylinder-deactivation to save on fuel. Dodge and the EPA therefore rate it for 15 mpg in the city and 25 mpg on the highway, for a total of 18 mpg combined; it won’t come as a surprise that it only drinks premium gas, too. Still, when I tempered my baser urges and drove with some restraint, I managed to get my combined average into the (very) low twenties. 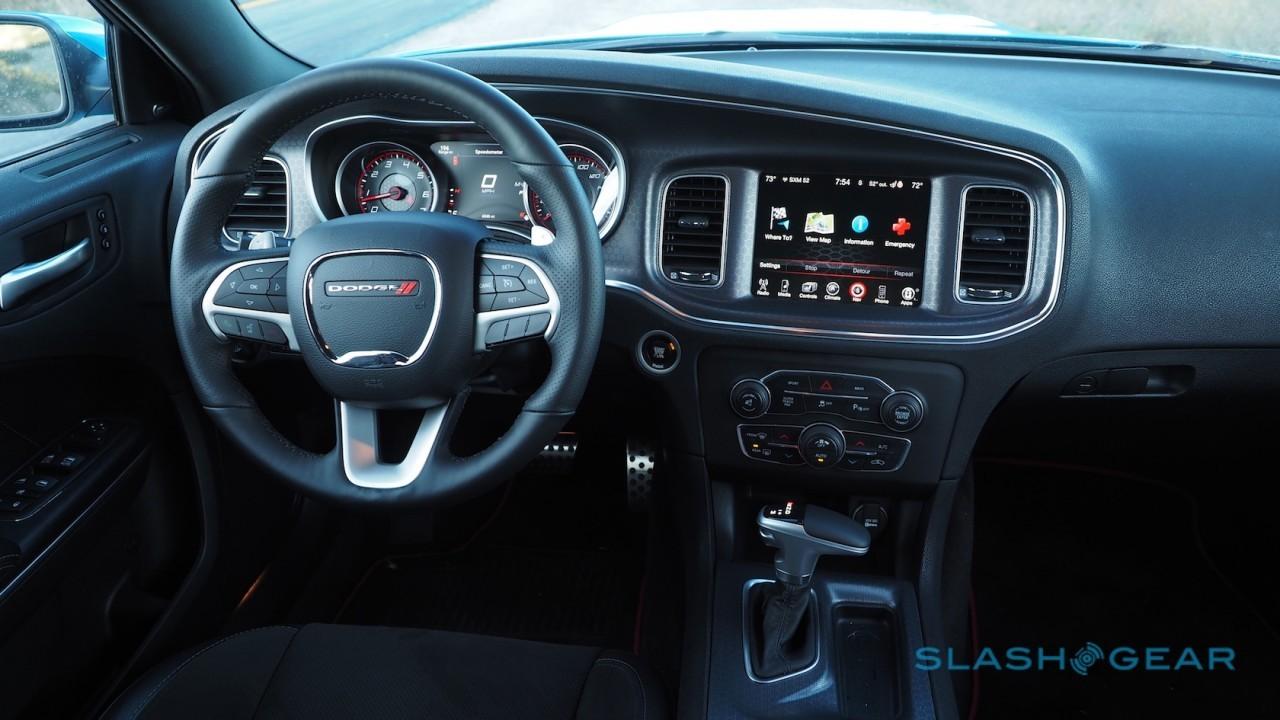 Something has to give, mind, and that’s generally in interior comfort. Dodge’s dashboard is solid but plasticky, the buttons and controls straightforward if hardly inspiring. My review car had the $1,595 Nappa leather and Alcantara seat upgrade, which also throws in heating and ventilation, heating in the rear, a heated wheel, seat memory, and a few other niceties. Without that, you get black cloth seats.

$695, meanwhile, added navigation to the Uconnect 8.4-inch touchscreen, for the most part a solid and intuitive system borrowed from Chrysler’s parts bin. Unfortunately, like the Chrysler 300S I reviewed a few weeks back, it too possesses the most laggardly onscreen keyboard known to humanity. 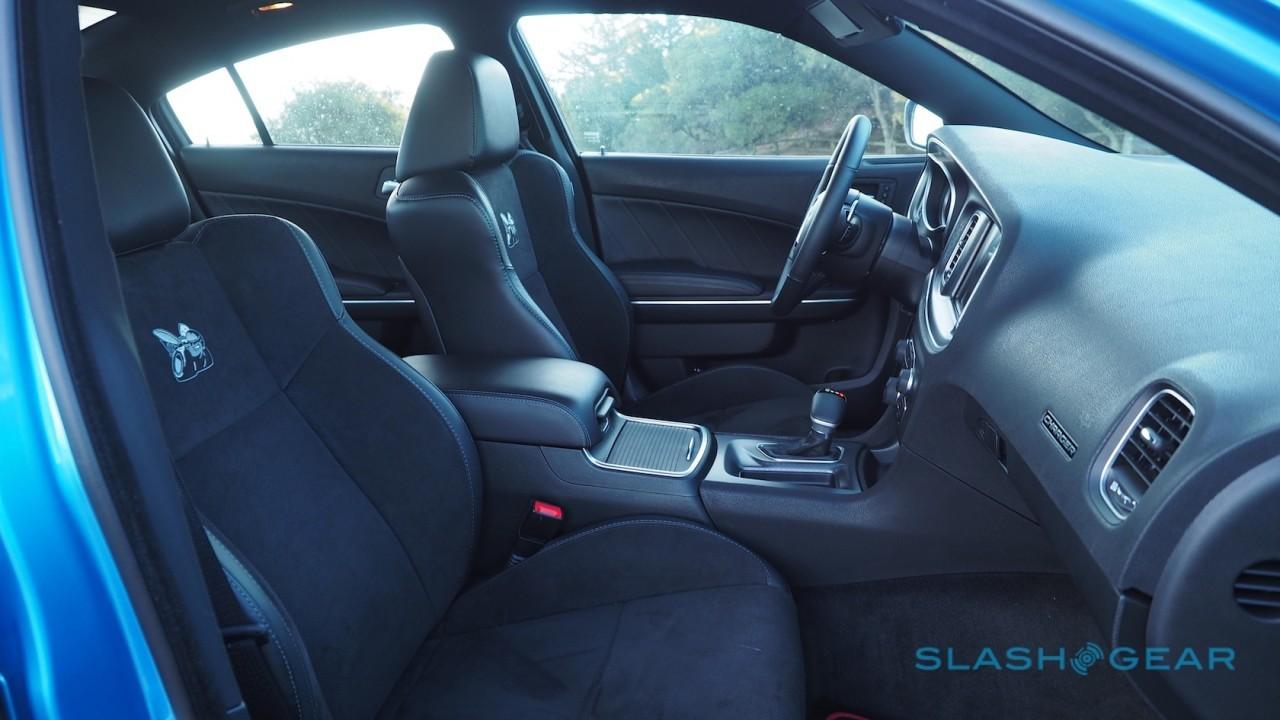 Forget quickly punching in an address while you’re waiting for the lights to change; in fact, best factor in some time before your journey needs to start, just to allow your blood to cool down from the frustration.

Some of the other fancies I’d got used to in the 300S are also on the options list. Blind-spot and cross-path detection are part of the $595 Driver Confidence Group (which also includes rear-parking assist and heated side mirrors), while if you want adaptive cruise control it’s bundled in with the $1,995 Technology Group. 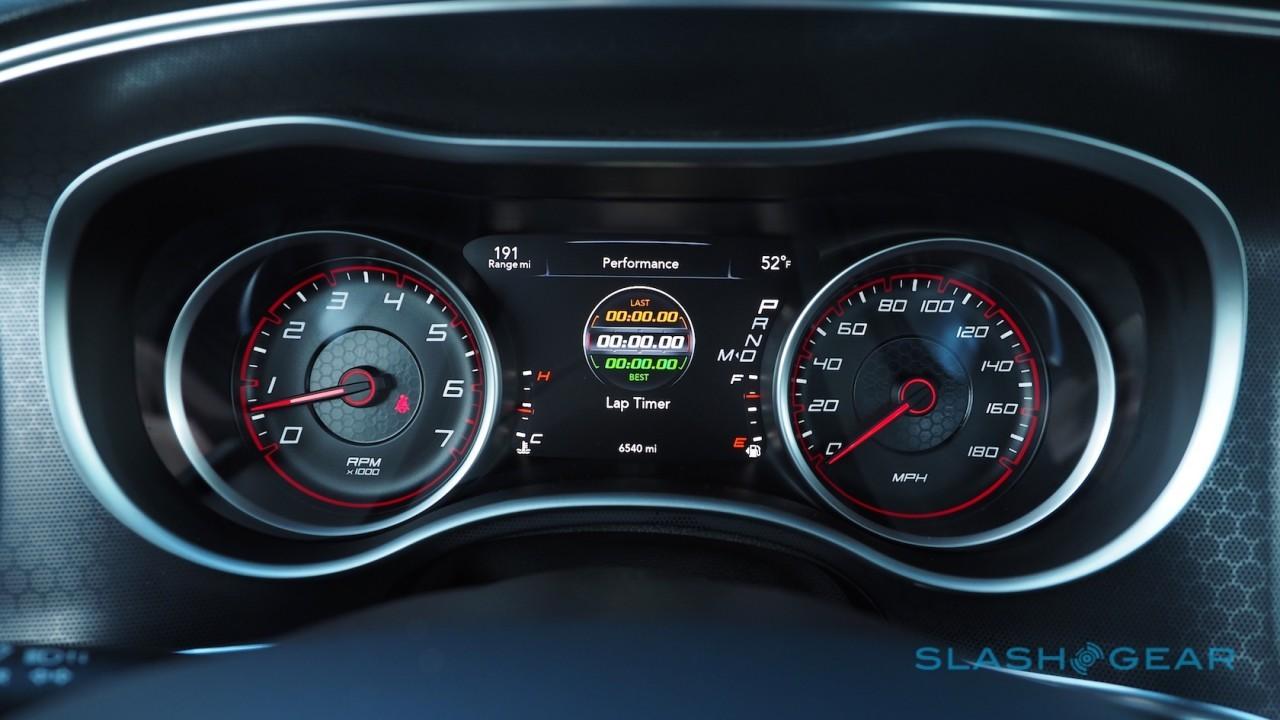 They’re nice toys, but I can’t help but feel that most would distract from the Charger R/T Scat Pack’s greatest charm: its raw, unadulterated power. This sort of power and torque really shouldn’t be accessible for such little cash, and even if you don’t have a track to go playing on, the snorting, grunting, gurgling noises the V8 is capable of even at moderate speeds are enough to fix a smile to your face.

That you can fit the family – and their luggage – in there too adds an unexpected degree of practicality. 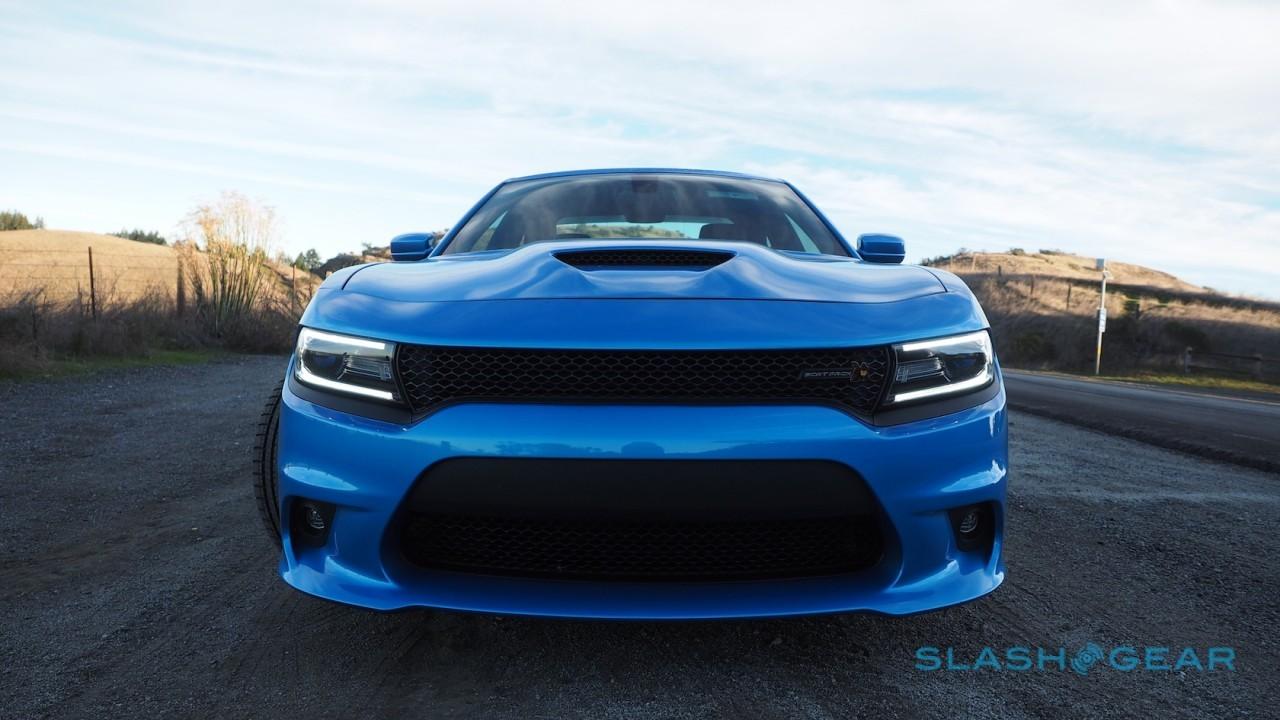 You have to be okay with compromise to live with the 2015 Charger R/T Scat Pack. Fuel consumption will be high, cruising noise might give passengers a headache, and your neighbors will scrub you from their Christmas card list. Most of the geeky stuff is optional, and there’s a simplicity to the “power + angry style = great” equation that’s aeons away from some of the more respectable sports sedans out there.

Nonetheless, for under $40k you can have a car that’s usable every day but can keep up with exotica several multiples its price. An unapologetic slab of entertainment with enough to keep both purists and newcomers to the muscle car creed happy. And, really, who wants to be respectable all the time?