The new 2015 Corvette Z06 Convertible has been revealed, the 625 HP droptop version of the Z06 coupe announced back in January, with Chevrolet promising no compromise in performance despite the missing roof. In fact, the 2015 Z06 Convertible is 20-percent stiffer than the old, fixed-roof Z06, Chevrolet claims, and demanded no structural changes over its hard-top sibling. Under the hood is the new LT4 6.2L supercharged V8.

That V8 musters 635 lb-ft of torque and “at least” 625 HP, paired with a seven-speed manual transmission with Active Rev Match. Alternatively, there’ll be an 8L90 eight-speed automatic with paddle-shifters and the promise of smaller steps between its gears for less rpm lag.

Like the Corvette Stingray – which has “just” 460 HP – the new Z06 Convertible has SLA-type front and rear suspension, though here retuned for the higher performance. There’s also Magnetic Selective Ride Control dampers, which are now standard on the Z06, plus launch control for both manual and auto transmissions, traction control, an electronic limited slip diff, and performance traction management. 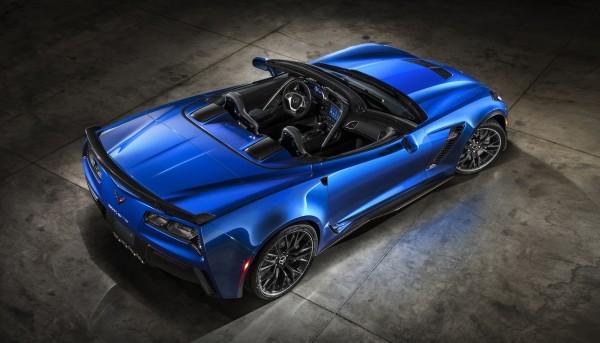 On the outside, the Corvette Z06 Convertible is 2.2-inches wider at the front than the Stingray, and 3.15-inches wider at the back. The Z06’s tailpipes are also spread further apart, and there’s a new mesh grill the design of which supposedly sucks in more air than if there was just an empty hole. The hood vent is larger, and there are standard brake cooling ducts front and rear.

19-inch wheels on the front and 20-inch wheels on the back come with a choice of brakes. On the regular Z06 Convertible, they’re Brembo two piece steel rotors, while on the Z07 Performance Package they’re upgraded to larger carbon ceramic-matrix rotors, both stronger and 23 pounds lighter. 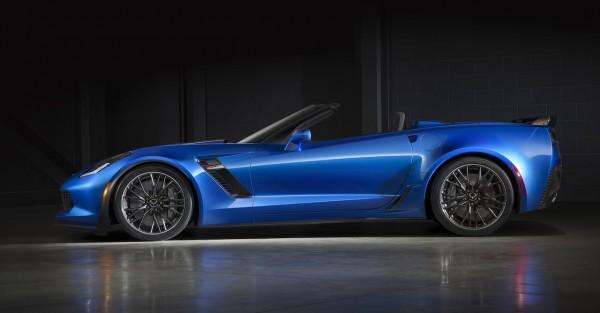 Inside, two seats are offered, either the GT option for more all-round comfort, or a Competition Sport seat which has better side bolstering for track use. The interior itself is clad in a combination of leather, aluminum, carbon fiber, and micro-suede, and can be had in five different colors, including the Z06-exclusive blue and dark gray finishes.

The electric roof can be lowered remotely from the key fob, or be opened and closed while driving at up to 30mph. Although fabric, it has a glass rear window; Chevrolet will offer it in four different colors.

GM says the Corvette Z06 Convertible is good for a 0-60 mph run in under 3.5 seconds. What we don’t know is how much all that performance and style will cost us, with Chevrolet yet to confirm pricing. 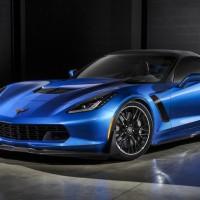 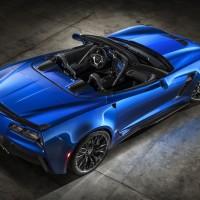 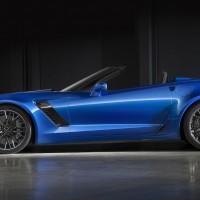