The 2013 Cadillac ATS has some serious challenges ahead of it. Mid-life crisis convertible aside, there’s no car segment so fraught with identity issues as the compact sport sedan. So far, the BMW 3-Series has been the “I’ve made it” model to beat, a heady Teutonic mixture of performance, prestige and affordability, but Cadillac is hoping the smallest model in its range can light an American torch to rival it. The specter of the baby Beemer looms large over each aspect of the ATS, but that’s not to say the German icon has things all its own way. We caught up with Cadillac at a 2013 ATS preview to see whether the all-new car was truly as “world-class” as promised.

Cadillac’s design language is clear, the crisp edges softened slightly from the more memorable of the “Art & Science” concepts like the Ciel and Sixteen, but still distinctively purposeful whether parked up or in motion. Some of the details are particularly pleasing: the huge trapezoid gape of the grill slashed across by the front bumper, for instance, and the way the headlamps flood down from the leading edge of the hood and spread somewhat, visually broadening the stance. The rear tapers to the familiar pinch of Cadillac’s existing XTS, the LED lights slashing neatly at the extremes of the trunk lid and haunches. 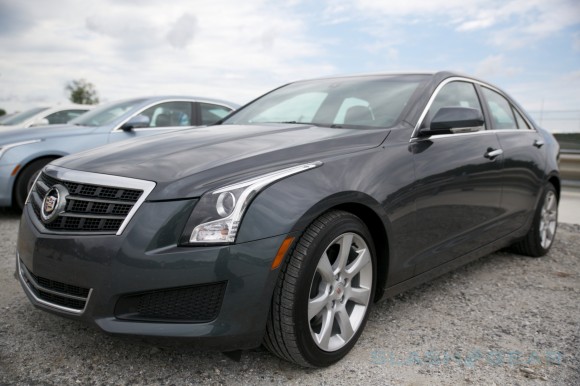 The 18-inch wheels – standard on the Premium model, an option on the Luxury and Performance – do a good job of filling the arches, though the standard 17-inch set are decent. Cadillac has obviously had the tape measure out to make sure the ATS blends in well with the rest of the compact sport sedan crowd: at 182.8 inches long, 71.1 inches wide and 55.9 inches high, it’s 0.3 inches off the length and 0.2 off the width of the 3-Series, while sitting lower than Mercedes’ C Class or Audi’s A4.

The ATS launches with a choice of three powerplants, starting with a normally aspirated 2.5L four-cylinder and topping out with a 3.6L V6, while a 2.0L four-cylinder Turbo slots in-between as the performance option. All are paired as standard with a 6-speed auto gearbox with slick magnesium paddles behind the wheel for those moments you want to take charge – though the turbo can optionally be outfitted with a 6-speed manual – and rear-wheel drive, with all-wheel drive an option on the two more powerful engines.

At the entry-level, the 2.5L musters 202 hp at 6300 rpm and 191 lb.-ft of torque at 4400 rpm. Cadillac claims a 7.5 second 0-60 mph time and 22 mpg city / 32 mpg highway economy, though it’s worth noting that it also recommends regular fuel rather than the premium BMW, Mercedes and Audi would all prefer you to fill up with (in contrast, Cadillac only specifies premium for the turbo). We tested the ATS in a combination of road and track conditions, and while the 2.5L is obviously not the most powerful engine around, that only left more space for the steering and road-holding to shine.

The electric power steering avoids the vague sense of disconnection that some systems of its type suffer, instead being precise and accurate; there’s a sport mode, which tightens response up further, though it’s not an extreme difference in most driving conditions. Nonetheless, point the ATS at a corner and it simply follows, with no wheel shudder or fuzziness. Cruising in sixth gear is a matter of keeping a single finger on the wheel (though we’d recommend more, obviously), but the ATS instantly wakes up when you get to twistier stuff, albeit showing some of its power shortage and demanding you snap at the paddle once or twice to kick into a lower gear.

That’s not a problem that affects the 2.0L Turbo, and what the mid-range ATS engine lacks in capacity it gains in forced-induction grunt. 272 hp at a more usable 5500 rpm, along with 260 lb.-ft of torque at 1700-5500 and a 5.7 second 0-60 time, look better on paper and feel better on the road, and once the turbo has spooled up there’s a broad band of power to make use of. It’s a good foil for the excellent suspension and road-handling, the multi-link suspension – Cadillac’s first five-link system – doing a great job of clinging and smoothing in equal measure.

Cadillac’s own economy figure predictions suggest the Turbo will hit the same mpg as the 2.5L four-cylinder, though we’ll believe that when we see it. If we had a complaint it would be the soundtrack: Cadillac’s Turbo lacks the appealingly animal growl of rival engines, and is serviceable but uninspiring. We can’t criticize the brakes, though, the Brembo discs pulling the ATS to a 60-0 mph stop in 129 feet according to Cadillac’s own testing.

Finally, there’s the 3.5L V6, a step back toward luxury from the forced thrust of the Turbo, but still possessing enough blunt force to make the ATS a machine to be reckoned with on the road. 321 hp at 6800 rpm, 275 lb.-ft of torque at 4800, and a 5.4 second 0-60 run are paired with (estimated) 19 mpg and 28 mpg city and highway economy figures respectively. In short, it’s the fastest ATS but also the thirstiest and heaviest, though Cadillac is at pains to point out that it has undercut all of its segment rivals on the scales. The company scrupulously paired back curb-weight by shaving away unnecessary metal, punching holes through struts and bars, and generally refusing to accept a component if a lighter version was within budget (even down to picking smaller screws where possible, saving 36g apiece).

The biggest engine slurs along smoothly on the Magnetic Ride Control (a cost option on both the Turbo and the Premium models) with all the waft potential you might expect from a larger Cadillac. However, it doesn’t sacrifice all its performance: flick at the paddle shift (or, indeed, let the auto gearbox show its surprising degree of intelligence and handle the changes itself, which we often found we couldn’t fault) and you can expect most of the point-and-play excitement that a sports compact buyer might want. Cadillac’s various electronic driver aids tempered oversteer to the point where it was difficult to coax from the ATS, and it’s possible to throw the car around in ways rear-seat passengers really wouldn’t appreciate.

BMW, Audi and Mercedes haven’t just built reputations on style and performance, but the quality of their interiors, and thankfully Cadillac has stepped up with the ATS’ kit and trim as well. Pride of place is the latest iteration of the company’s CUE informatics and entertainment system, an 8-inch capacitive touchscreen with HD radio, Bluetooth connectivity for up to ten devices, CD, voice recognition, and both USB and SD connectivity. 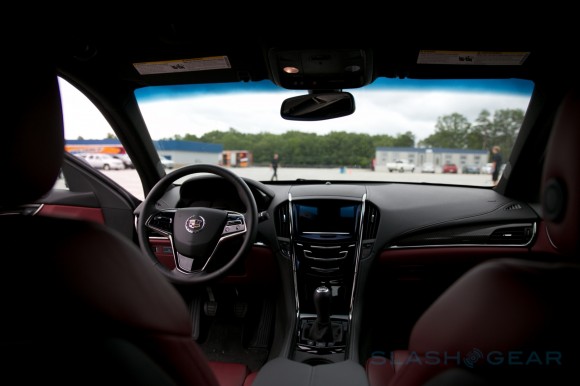 CUE looks significantly slicker than most of its segment rivals, and uses the sort of swipes and gestures – such as pinch-zooming – that we’d more commonly associate with the iPad. That helps keep its breadth of functionality easy to approach, and it didn’t take long before we had hands-free calls working and music playing from our smartphone. Commonly-used controls like HVAC use touch-sensitive buttons embedded in the swathe of black running down the center console, with haptic feedback to let you know you’ve stabbed at them accurately. Our only complaint would be the occasional lag in moving between functions, though it was never enough to distract us too much from the road.

Bose has provided not only the speakers but a clever noise-cancellation system that uses the same sort of active noise-suppression as found in some Bluetooth headsets to reduce road and engine noise in the cabin. It works impressively well, and without introducing the bulk and weight of traditional sound insulation. Meanwhile, CUE also pushes information to a 5.7-inch display in the instrument cluster and to a head-up display (the latter part of the Driver Assist package). 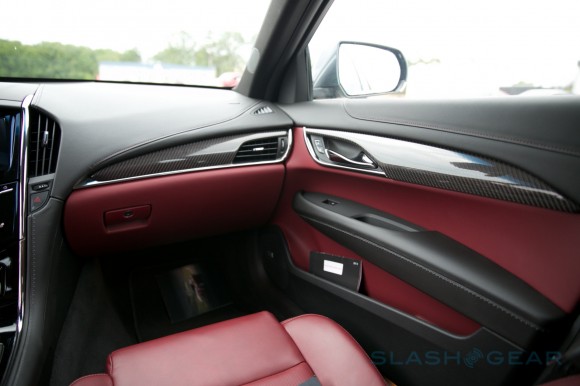 Several leather finishes for the seats – or optional (and pleasingly grippy) sports seats – are on offer, including platinum grey, caramel, black and a fetching morello red, with a choice of brown or black accents and either wood, aluminum or real carbon fiber trim, the latter being a first for a Cadillac. The interior mood of the car changes significantly with the different color combinations: the lighter shades and wood trim are less successful to our eyes than the sportier dark leather and aluminum or fiber trim. 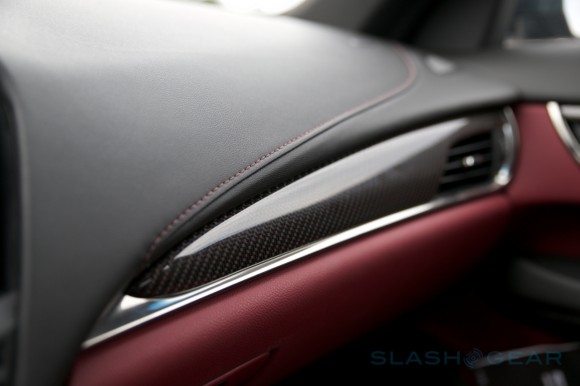 Either way, the rear accommodation feels a little more cramped than we’d like, with leg, shoulder and headroom all coming in shorter than what the 3-Series would offer. It’s not a deal-breaker, by any means, but that and the more limited trunk space – 10.2 cu.ft. versus the 12.4-13 that Audi, Mercedes and BMW supply – could be worth bearing in mind. 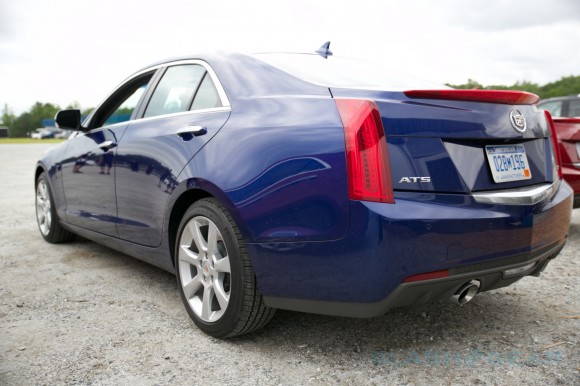 Finally, the 3.6L RWD Auto is $42,090 for the Luxury spec, rising to $44,590 and $47,590 for the Performance and Premium trims respectively. The AWD option is around $2,000 more. In short, Cadillac undercuts its German rivals and is competitive with Lexus too, despite heaping on the toys.

It’s been a long time since Cadillac broached the compact sport sedan segment, but the company has risen to the challenge admirably. Speaking to Cadillac executives, there’s an interesting blend of humility – recognizing the lofty goals of the 3-Series – and ambition; recognition that the 2013 ATS is more than just a shrunken XTS. Yes, it can deliver the traditional Cadillac wafting, but it can also unleash not only a turn of speed but the road-handling to deal with it both with safety and entertainment in mind.

Our complaints are few: a more aggressive exhaust note from the Turbo, perhaps, to match its punchy midrange, and accommodation for passengers and luggage once you get back beyond the front seats is tighter than others in the segment. CUE is ambitious and capable, making the few stumbles we experienced all the more glaring. We’d like to see an ATS-V performance version, too, though that’s likely to arrive in time (something Cadillac wouldn’t confirm, but didn’t seem too keen to deny with any great vigor).

Overall, then, the plusses outweigh the minuses. The 2013 Cadillac ATS looks great, is tightly constructed inside and out, rides brilliantly and does so at a price that’s highly competitive with the high-flyers in its segment. That it’s from a US brand and doesn’t spare the toys are factors that will undoubtedly appeal to many as well. BMW’s “ultimate driving machine” reputation was an ambitious target for Cadillac to choose, and that the 2013 ATS comes so close in many ways should be a huge wake-up call for rivals and buyers alike.