YouTube launched an app early this year that tried to harness the wealth of information and knowledge available on the video streaming site for the benefit of children. It was a laudable goal but YouTube Kids was immediately beset with problems, from searches that lead to inappropriate content to the usual problem of ads. Now YouTube has updated its child-friendly app in order to allay those fears, or at least some of them. But even YouTube admits it isn’t perfect and tries to enlist the help of parents themselves.

The biggest complaint that parents and advocacy groups had with the the Kids app was in search. Given Google’s algorithms, an innocent search for a favorite cartoon character could lead to videos filled with cursing. Given how dynamic and sometimes unpredictable search can be, Google is giving parents the final say in the matter. They can now disable searching entirely, limiting kids to the curated content that it is available through navigation. They now also have a say on the passcode of their choice. All of these new parental controls are now explained when parents startup the YoutTube Kids app.

YouTube does admit that some things can slip through the cracks and it can’t do everything by itself. It is now asking parents to help in keeping the space clean by flagging questionable content for later manual review.

The update isn’t just for parents, of course. Now kids can enjoy their favorite shows on a bigger screen if the family happens to own a Chromecast or an Apple TV or any device that supports those two’s streaming protocols. YouTube is also introducing the concept of guest-curated playlists, containing videos that, for example, recommend what a budding scientist should watch, or around themes like girl power. It is also expanding its treasury of content with videos from HooplaKidz, TuTiTu, SciShow Kids, DreamWorksTV and more. 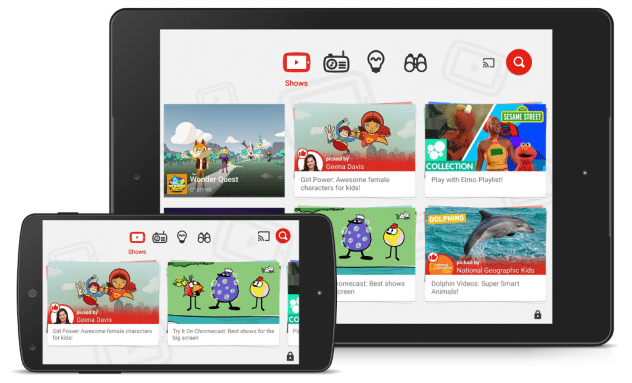 One thing that the update doesn’t satisfactorily answer is the problem of ads in the YouTube Kids app. Some advocates are concerned that the ads can be misleading, especially in the eyes of child. If adults can be mesmerized by them, how much more these innocent minds. YouTube tries to partly address the issue by limiting the type and content of ads allowed in the app, but given it is Google’s lifeblood, it will definitely never go away.