YouTube went down today for about 30 minutes, a rare occurrence for Google’s flagship streaming video service. Between about 5:20PM and 5:50PM Eastern Time, the site could not be reached. This included embedded videos in websites (this one, for example.)

Anyone attempting to visit the YouTube website saw a 500 internal server error message. This indicated that the servers were down, but YouTube hasn’t yet said why. The message was on the characteristically cheeky side (screen grab by Gigaom). 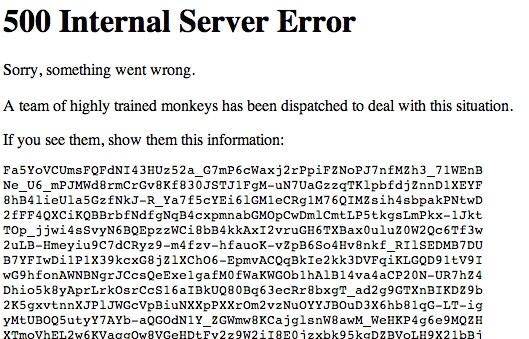 Some people are encountering errors, or a slower than normal experience on YouTube today. We’re working to fix the problem as soon as possible.

Some people encountered errors, or a slower than normal experience on YouTube today. We worked quickly to address the issue and fixed the problem. We’re sorry for any inconvenience this caused.

YouTube is ranked by Alexa as the third most popular website in the world after Google and Facebook. The video service itself claims 1 billion monthly users. Other than a possible server overload, no word yet on what caused the outage.