It’s been quite a while since we’ve heard from once famous Japanese camera maker Yashica. It’s finally jumping back into the scene but in the oddest way possible, through Kickstarter. It’s pitching a digital camera that is a throwback to its iconic Electro 35, but the Y35 also does it in a completely strange, and perhaps insane, way. The purely digital camera makes use of, and can’t even work without, “pretend” film whose sole purpose is to provide the ISO and format for the camera. Pretty much like real film, except there is no film involved.

In the new Yashica’s mind, the authentic feel of an old school non-digital camera is dependent on two things. One is the “winding” action you make after every shot. And the other is the use of a film, without which the camera is practically useless. The digiFilm Y35 has both, but the digiFilm part is admittedly the more curious and perhaps more ridiculous part.

Like on traditional film cameras, you slot one in before you’re able to use the camera. Unlike with film cameras, however, you’re not limited to a single format or kind. It’s probably easier to think of these pretend films as plugins and filters necessary to provide ISO sensitivity, effects, and even shutter speed. Yashica is offering four such films: ISO1600 High Speed, ISO400 Black and White with film grain effect, ISO200 Ultra Fine, and ISO200 120 Format (6×6) for square photos. 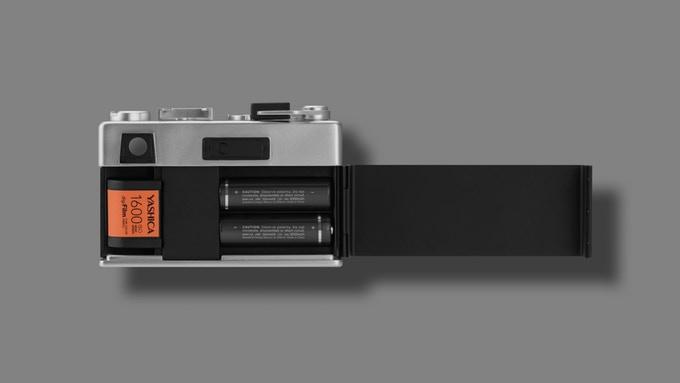 Beyond that, however, the Y35 itself is a pretty mediocre camera that might be easily outclassed by smartphones these days. It has a 14 megapixel 1/3.2-inch CMOS sensor and a rather small f/2.8 aperture. And like traditional cameras, much of these are fixed. Unlike those cameras, however, photos are recorded digitally on an SD card. Amusingly, it is also powered by two AA batteries.

The digiFilm Y35 might not be a practical investment for photographers, but, like many things on Kickstarter, Yashica is banking on brand, novelty, and nostalgia to sell the idea. And it does seem to have worked, raising nearly four times its goal with plenty of time to spare.