One of the worst effects of Android fragmentation is that devices often don’t get even critical security patches fast enough. A related disadvantage is that not so old devices are even less likely to get those same fixes. That’s the rather unfortunate situation that owners of the two-year old Sony Xperia Z5 Premium might be finding themselves in. According to Sony’s Twitter support account, that model, and most likely all others before it, won’t be getting patches for the Meltdown and Spectre vulnerabilities currently rocking the computing industry.

For those who haven’t heard it yet, Meltdown and Spectre are two very serious security vulnerabilities that they advantage of how modern processors work in order to gain unauthorized access to parts of an operating system’s memory or inject malicious code. While it initially and mostly affects Intel processors, even ARM-based processors running inside our mobile devices aren’t immune to them. You can read up on Google’s report on the details of these two haunting bugs.

Chip makers and platform developers have already issued fixes for the two, though the fixes are sometimes just as bad as the problem. Unfortunately, Android devices have it worse because of the way updates are rolled out. To be fair, Google has already patched things on its side, so it’s up to OEMs to deliver the goods.

Unfortunately, not all OEMs behave the same way. They are, understandably, more focused on updating at least their most recent models. Sadly, that leaves users who faithfully hung on to their brand defenseless and helpless. Sony advises users to keep their phones safe by avoiding installing apps from sources outside of Google Play Store, but some malware always manages to sneak in there anyway. 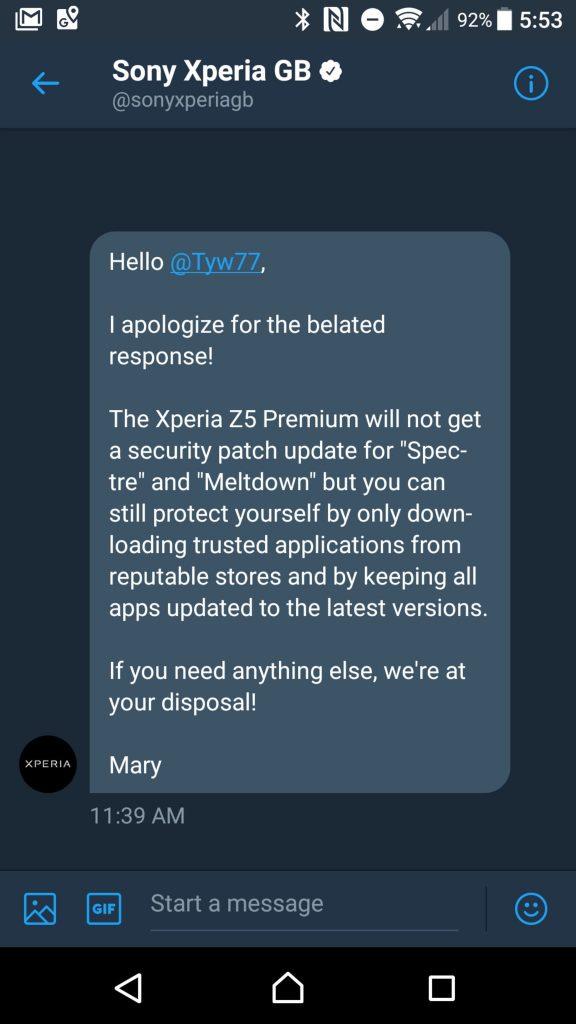 While the tweet only specifically mentions the Xperia Z5 Premium, it reasonable to expect it will be the same for any device that came before it, including the entire Xperia Z5 line. Even if they’re just a little over two years in the market. Android Oreo’s Project Treble was designed specifically to address this unfortunate situation, but it comes a little too late for almost all Android devices in the market today.