Sony‘s press event is in about 2 days but of course we will welcome any advanced screening of the OEM’s premium-looking devices. This may not be the next Xperia flagship, but these Xperia Z3 Compact smartphones are still a refreshing sight, especially considering they come in new and bright colors.

It seems that Sony has swapped out the black, white, and purple color scheme that has permeated much of its devices since the launch of the Xperia Z1 and its siblings. That said, these colors of glossy black, white, mint green, and red/orange, aren’t exactly new. The company has previously launched smartphones bearing those same colors and sometimes premium hardware but mostly in East Asian markets, particularly in Japan. Unless we are looking at regional variants, it seems that Sony will be applying those vibrant colors to its next lineup.

As to specs, of course we can’t get a glimpse of them here. But considering the Xperia Z1 Compact, which is its direct predecessor, sported near-flagship hardware in a compact size, we can’t be blamed for expecting the Xperia Z3 Compact to offer the same. That means a 4.5-inch 720p screen, a fast 2.5 GHz quad-core Snapdragon 801, and 2 GB of RAM. We also expect some decent amount of waterproofing as well as a workable rear camera to be included in that set. 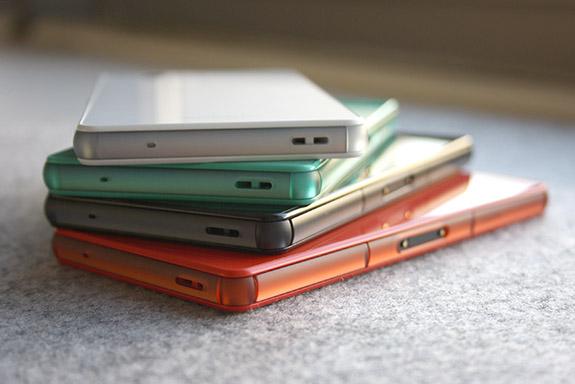 As enticing as that may sound, one of the biggest issues with Sony’s compact offering is one of availability. In Australia, where this leak hails from, the Xperia Z1 Compact remains a carrier exclusive. While it is available unlocked from Sony in the US, the smartphone actually only officially arrived in the country just last July, which put Sony buyers in a dilemma between purchasing that older model or waiting for the Xperia Z3 Compact, should it land in the US much earlier.

Of course, we’ll just have to wait for Sony to drop whatever bombshell it has this week. The OEM will be unveiling, among other things, the Xperia Z3 flagship and a surprise newcomer, the Xperia Z3 Tablet Compact. And we will be there to cover what Sony has in store for the Android world this half of 2014, so be sure to keep tabs on our IFA 2014 coverage to get the latest scoop.